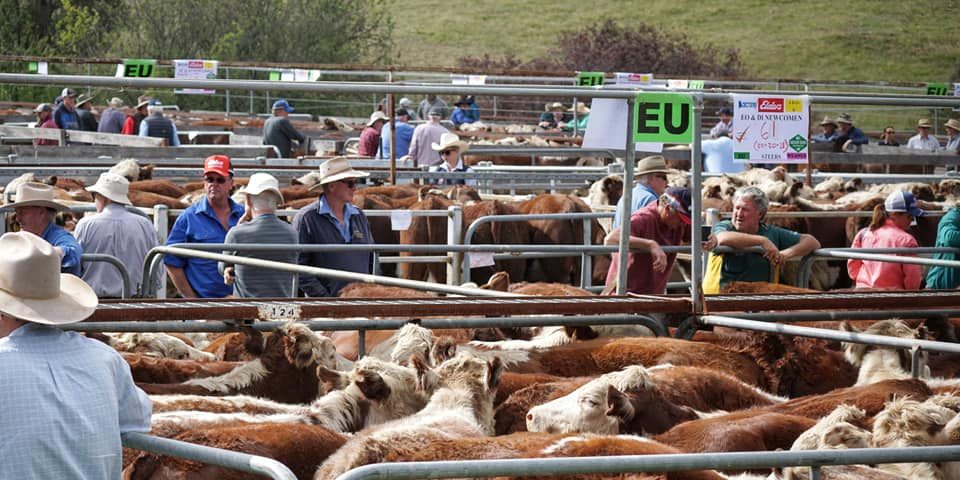 Day two of the 2021 Mountain Calf Sales opened with the Hereford steers at the Ensay sale making up to $2010 per head and Hereford/Shorthorn heifers hitting $1940.

Elders agents yarded a total of 977 head of Hereford and Hereford-cross cattle for the Ensay sale which sold to a range of buyers for an overall average of $1764.

The Herefords Australia champion pen was awarded to Craig and Jane Lloyd of Reedy Flat for their pen of 16 EU accredited steers.

The champion pen was an especially poignant win for Mr and Mrs Lloyd as there was also a memorial award presented by Elders in memory of Tony Pianto, a former Elders agent and close friend of Mr and Mrs Lloyd.

The champion steers had a green weight of 416kg and later sold for the top sale price of $2010 to Ian Lester for a grass finishing operation on King Island.

Mr Lester is a repeat buyer of the Lloyd calves, having purchased their cattle in 2020 just prior to the bushfires that tore through the Ensay region.

According to Mr Lester the steers more than doubled in weight in under 12 months and they sold the first lot to processors in August and the last lot in October.

“We find [the mountain calves to be] the best cattle in Victoria, so we try and buy them every year,” Mr Lester said.

Craig and Jane Lloyd have been selling cattle at the Mountain Calf Sales for 25 years and stayed in contact with Mr Lester after the sale of their calves in 2020 to keep up with the animals’ progress.

Mr Lloyd was delighted with the prices he received for his steers at the sale and said it was great to have a repeat buyer in Ian Lester.

“[The prices] just blow me away, we didn’t expect anything like this today, it’s fantastic,” Mr Lloyd said.

Mr Lester also purchased a pen of Hereford heifers from Reece and Wendy Newcomen for $1870 on behalf of a neighbour on King Island who was looking for some purebred Hereford heifers to start his breeding program.

The top heifer price of $1940 was paid for a pen of 25 EU accredited Hereford/Shorthorn heifers offered by Evan and Dot Newcomen and sold to Jamie Quinlan of Elders Yea.

The top price purebred heifers were offered by Bluey Commins of Nunniong Herefords and sold for $1900.

The pen of 16 heifers were between eight and nine months of age and sold through Elders Bairnsdale.

Mr Commins offered 92 steers and 38 heifers at this year’s sale and was thrilled with the result, describing this year’s Ensay sale as “the best one I’ve ever been in.”

Mr Commins was also very pleased to see his genetics on offer in other pens throughout the Mountain Calf Sales performing well on behalf of his bull buying clients.

“At every calf sale you go to they seem to be in the top pen and if not the top pen the top line,” Mr Commins said.

Once again, the quality and doability of the mountain calves across the different regions of Australia was credited with the strength of the sale and the number of return buyers.

“Whether [the cattle] are a bit tougher up here I’m not sure, but all the buyers that come up here and buy cattle, whether they go to King Island, or go up to Queensland or the middle of NSW, they’re always happy to come back and buy again because they know that they’re getting a product that will go ahead and make them more money down the track,” Mr Lloyd said. 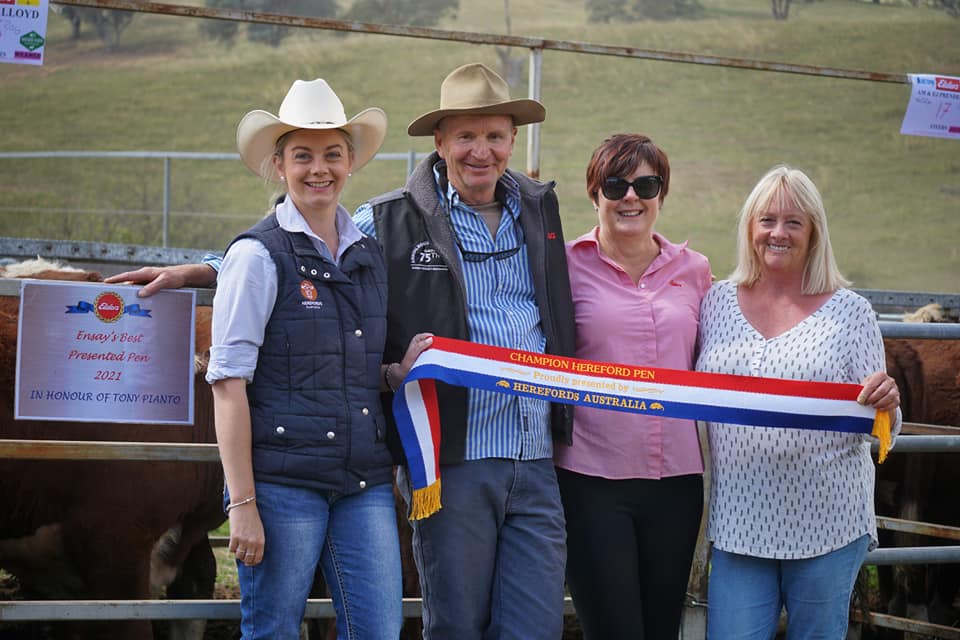 Ro Koebel, Herefords Australia and Nikki Pianto present Craig and Jane Lloyd with the sash for the champion pen of steers at the Ensay Weaner Sale. 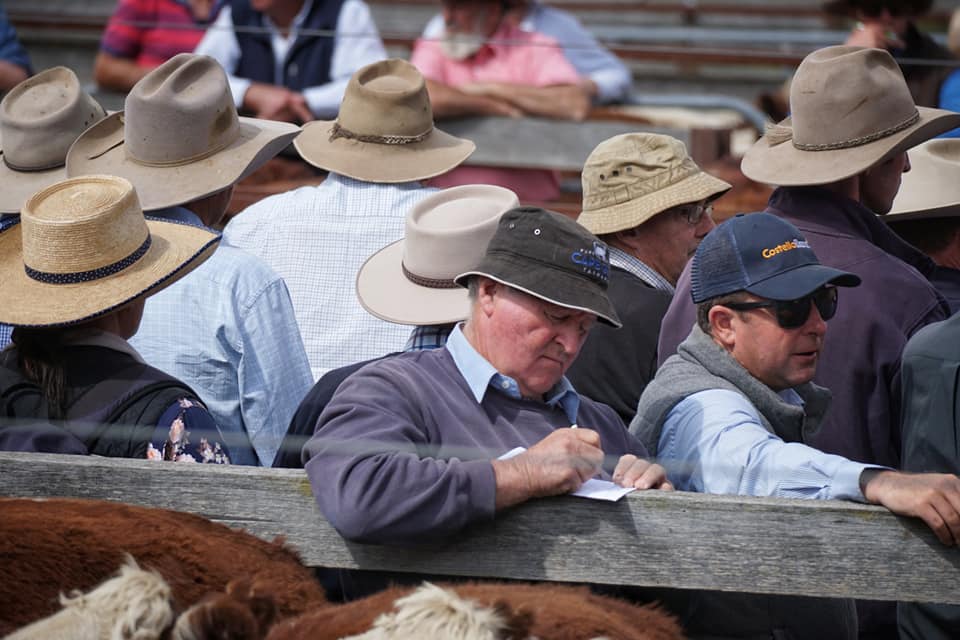 Ian Lester of King Island purchased a truckload of steers (including the champion pen) to take home and finish on grass. 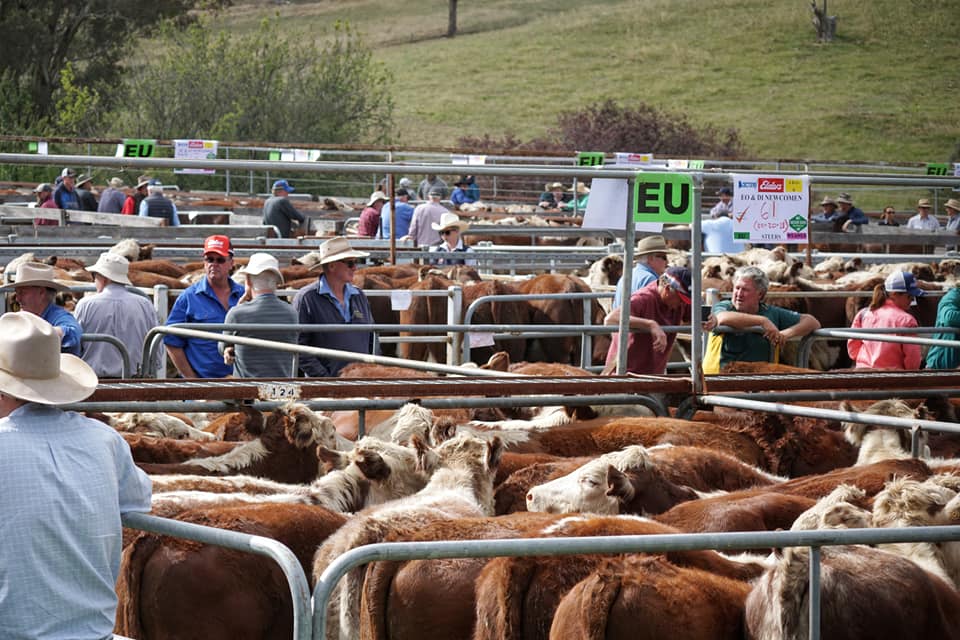 Steers sold to a top price of $2010 at the Ensay Weaner Sale. 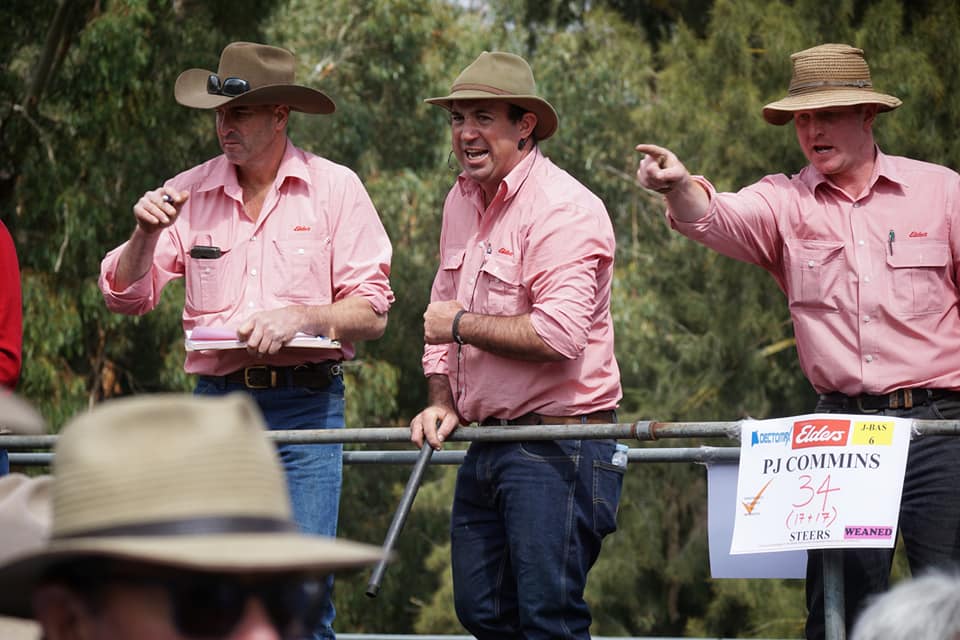 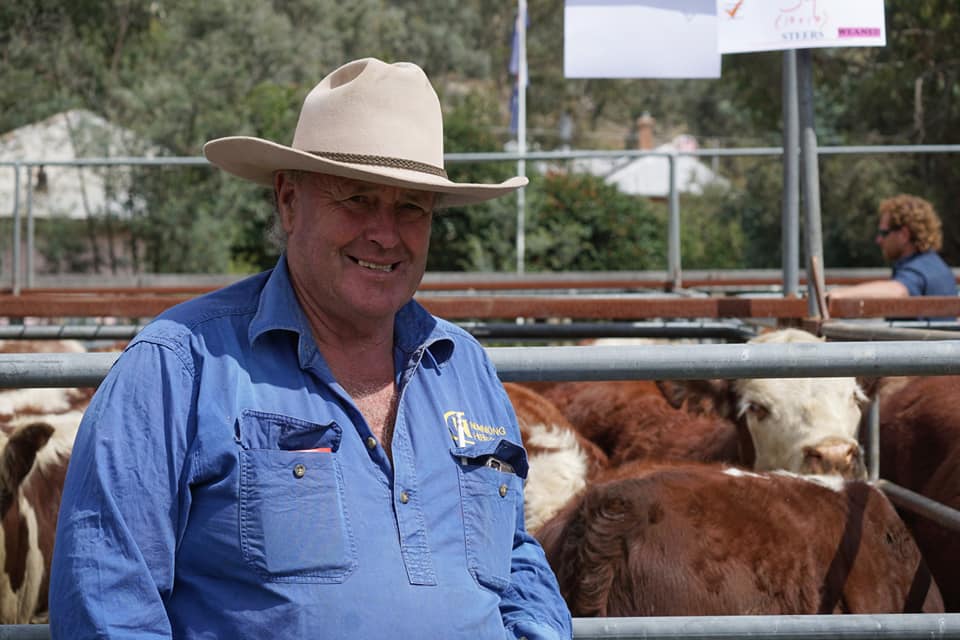 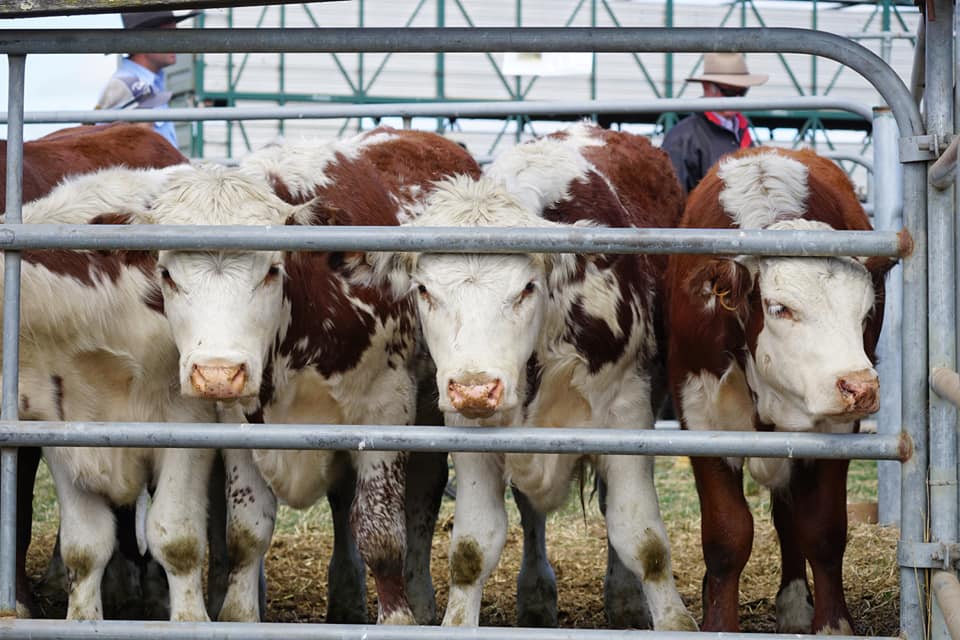 Hereford/Shorthorn heifers offered by Evan and Dot Newcomen made the top heifer price of $1940.