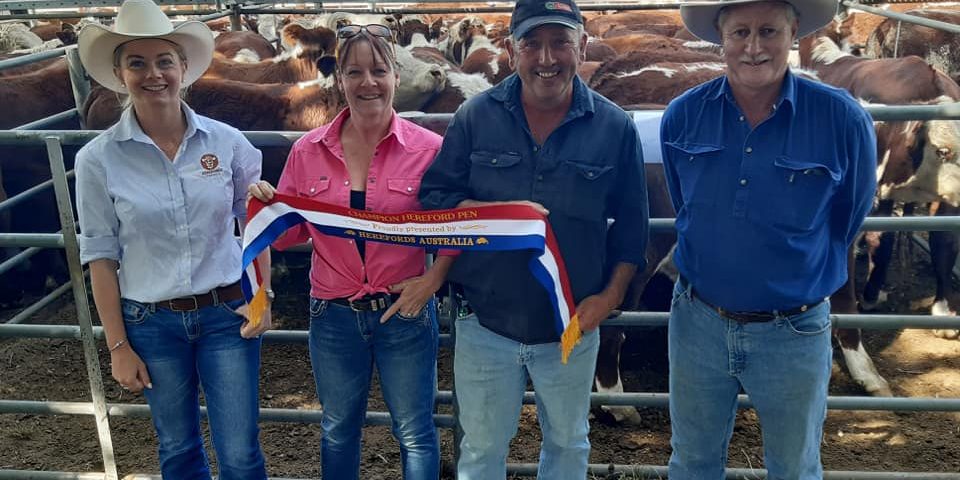 The finale of the 2021 Mountain Calf Sales certainly did not disappoint with a quality yarding of 1,127 head of Hereford and Hereford cross cattle at Omeo selling for an average price of $1813 and grossing $2,044, 200.

Elders agent Morgan Davies described the sale as “beyond expectations.”

“We knew it was going to be strong, we just wanted to meet the rate of everyone else.

“In the end the blokes that came to buy cattle bought cattle,” Mr Davies said.

Buying strength came from a range of sectors including backgrounders, feedlots, grass finishers and restockers.

“Cattle went to Yea, South Gippsland, they went as far as Tamworth and Killara, so we had fantastic support and it probably accelerated the sale,” Mr Davies said.

Hereford steers hit a top price of $2050 for the opening pen of 25 steers offered by McCoy Farms which sold to Hurstdale Pastoral Company.

PJ McCoy was thrilled with the result and described it as very rewarding given the tough seasonal conditions the area has experienced over the last few years.

“To get these prices here today is very good, we are very happy with it, just as long as the next bloke can make a quid out of it, then everyone will be happy.

The champion pen was judged by Alan Mitchell of Powlett River Downs, Wonthaggi and was presented to Russell and Colleen Foster for their pen of 18 EU accredited steers.

Russell Foster described the result as “outstanding” and praised the evenness of the cattle presented on sale day.

“We were hoping, no, wishing for $2000 and we got there, this first row of steers right down here, there’s not a lot of difference in the whole row, it’s just a fantastic run of steers I thought,” Mr Foster said.

The top sale price was fetched in the heifer runs with a pen of 20 10-month-old EU accredited Hereford/Shorthorn cross heifers offered by the Ah Sam family selling for $2180 to L & L Kelly.

Brendan Ah Sam said he was blown away by the excitement in prices in the heifer pens.

“Last year I think the top heifers here sold for $1810 and I think that was a record last year and I thought in my time we’d never see those sorts of prices for those 10-month-old heifers [again],” Mr Ah Sam said.

According to Mr Ah Sam their heifers were sold to a byer from Edenhope who had said it was his “life-long dream” to come to the Mountain Calf Sales and buy a pen of heifers and once he was at the sale, he wasn’t going home without them.

Mr Ah Sam also praised the McCoy family for getting their steers into the opening pen of the sale and achieving the top price despite having been burnt out in the 2020 bushfires.

“This time last year [the McCoys] were completely burnt out, I went out and gave them a hand with some fencing and there wasn’t a blade of grass, and for him to get his calves into the top pen today was just an absolute credit to the breeding around this area and it’s why people keep coming back,” Mr Ah Sam said.

An active buyer in the heifer pens over the two days of Mountain calf sales was Elders Agent Scott Bremner, purchasing on behalf of the Elders Killara feedlot in Quirindi.

According to Mr Bremner he made the trip to the Mountain Calf Sales because he knew the cattle on offer would be high quality and offer “real performance.”

“Killara has got a long history of coming down here and supporting these calf sales.

“The Herefords that are left are very good Herefords, the true cattlemen have stuck with it in a lot of these mountain areas and it’s just been fantastic, this year they’ve just been rewarded, it’s great for the whole district,” Mr Bremner said.

Mr Bremner praised the quality of cattle on offer over the two days of the sales adding that “if you’re going to buy dear cattle you might as well buy good ones.”

Peter Homann of Elders was also operating at the Mountain Calf Sales, purchasing on behalf of a family-owned feedlot in South Australia and similarly praised the quality of the cattle and the strength of the sales.

“The Hereford cattle are by far the most outstanding cattle here, but bear in mind there’s 150 years of breeding up here,” Mr Homann said.

Mr Homann also credited the growth of the grass-fed beef market with some of the buying strength at the Mountain Calf Sales.

“Over the last few years there’s these pasture assured, grass-fed programs going right across right across the southern states and into southern Queensland.

“A lot of these products are grass only, and these cattle are just perfect for green grass, the cattle perform so well, and that program just keeps getting bigger and bigger as people require more grass-fed-only beef,” Mr Homann said. 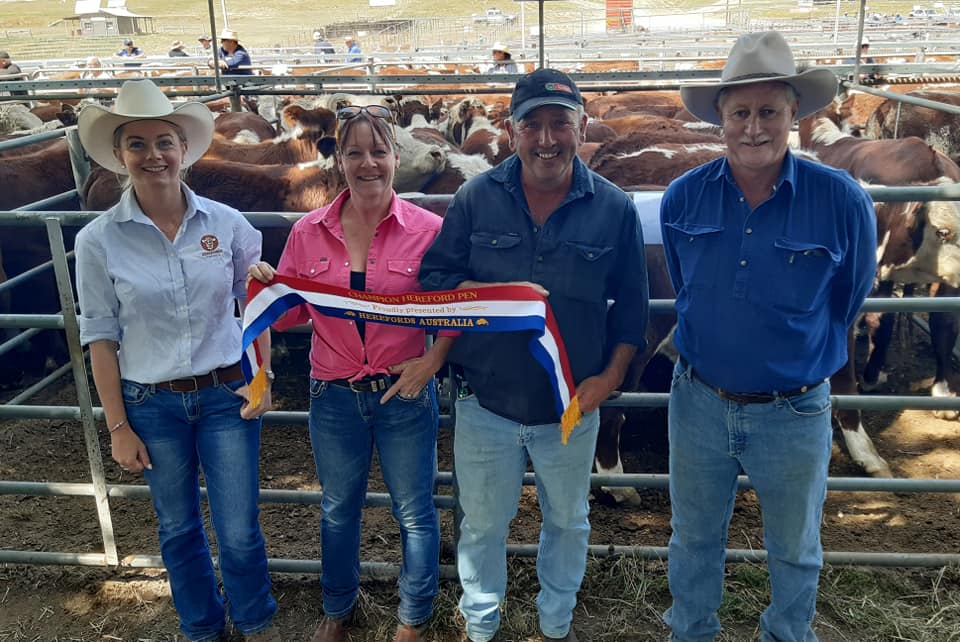 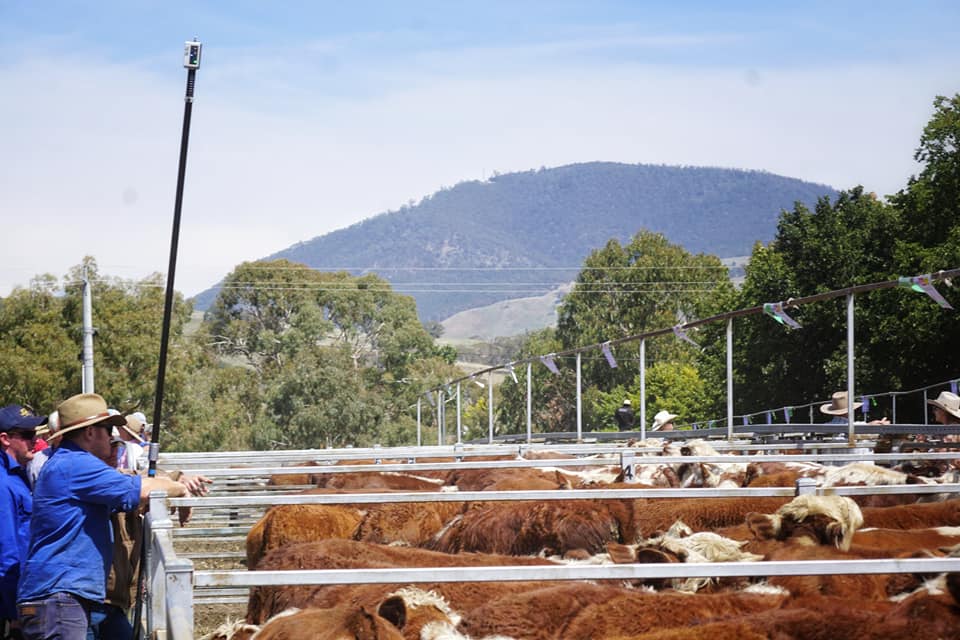 Buying strength came from across the eastern states of Australia from a range of markets to drive prices above $2000 at the Omeo weaner sale. 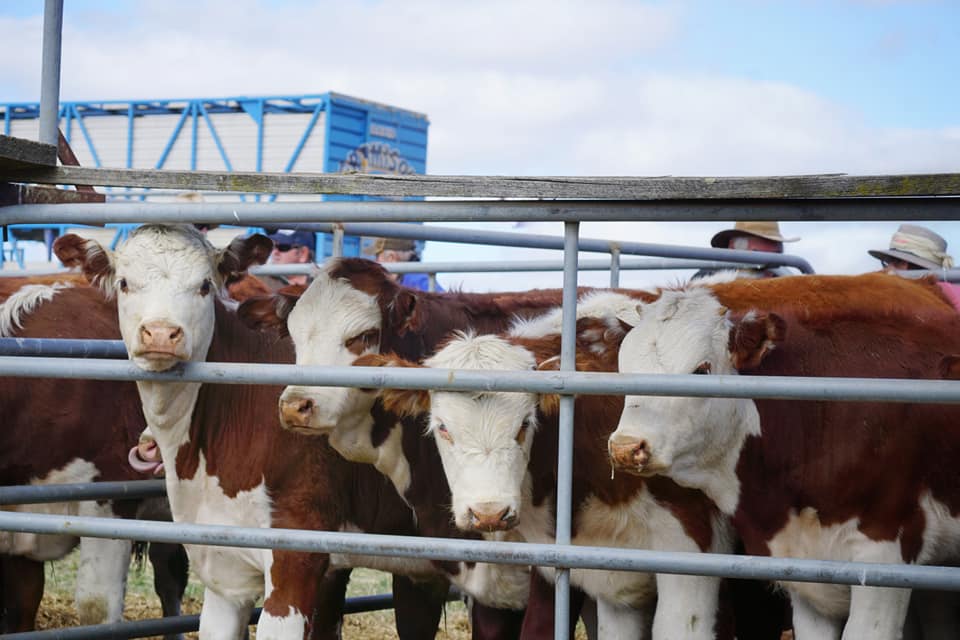 Hereford steers sold to $2050 and Hereford-cross heifers sold to a top price of $2180 at Omeo. 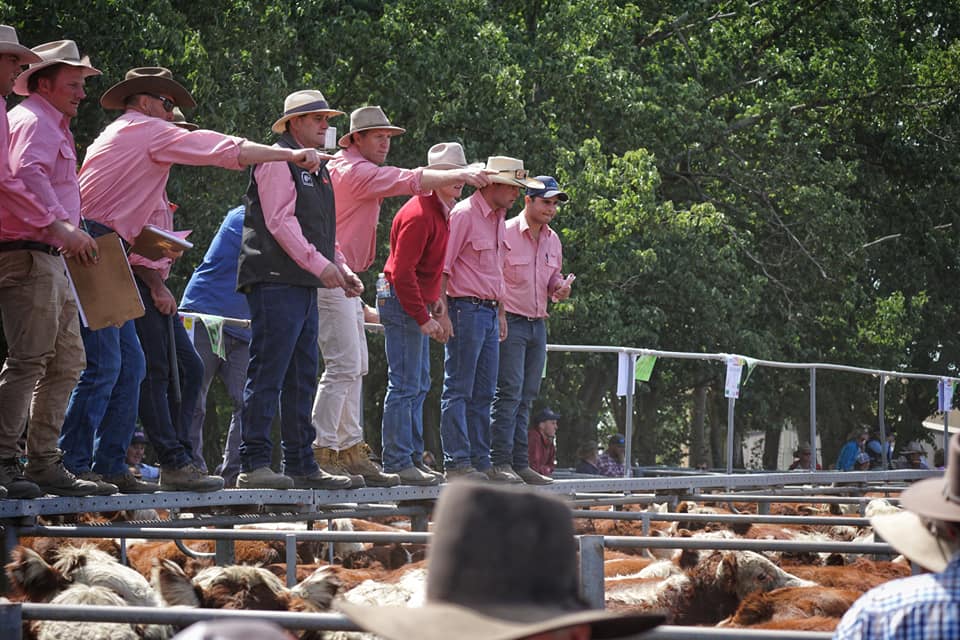