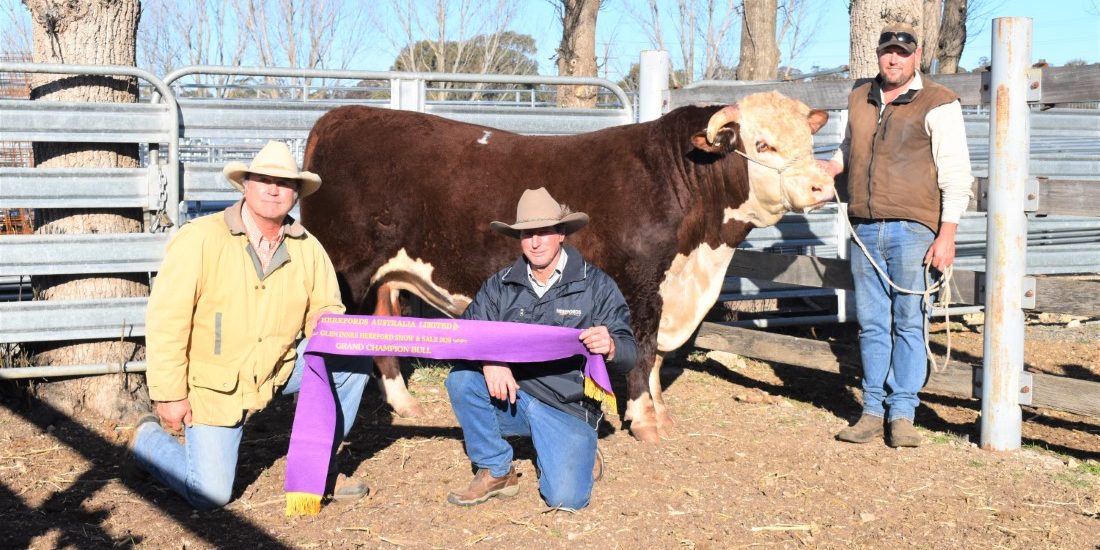 This is the fourth year in a row Phil and Brad Thomas of Kylandee Herefords, Inverell have claimed top honours in the Glen Innes Bull Show, a trend Brad says they hope to continue.

Sired by Talbalba Line Up L203, Packsaddle was the heaviest bull in the catalogue, weighing in at 1055kg with and eye muscle area scan of 137 square centimetres and a scrotal circumference of 48 centimetres.

Packsaddle also had the highest daily weight gain of the 49 catalogued bulls at 1.43 kilograms per day.

Andrew Mackay of Merawah Poll Herefords took up the judging reins for the 75th annual event and was impressed by Packsaddle’s structural correctness and soft skin.

“He’s put together in all the right places with tremendous weight for age and beautiful skin.

Pinnacle is another son of Talbalba Line Up L203 while Paxton and Penthouse were sired by WRL Lancelot.

Mr Mackay was pleased with the evenness and size of the three Kylandee bulls:

“They’re a very strong trio of bulls. There’s plenty of weight and scale to them and they are a very even team,” Mr Mackay said.

Brad Thomas said it was very nice to take out the top pen of three for the first time as their stud’s focus has been on breeding consistent bulls to suit a number of markets with good carcase and good movement.

Second place in the pen of three bulls was awarded to Ben and Leanne Rumbel’s Supple Whiteface team of Supple Pilliga, Supple Pina Colada and Supple Picasso which Mr Mackay described as “a beautiful looking team.”

The Supple stud also took home the prize for the truckload of six bulls which Mr Mackay praised for being good footed with plenty of bone.

In the junior individual class first place was awarded to Reevesdale Pumba P010, exhibited by Graham and Felicity Reeves.

Pumba was sired by Kidman Calculate H2 and at 22 months of age weighed in at 870kg with an EMA scan of 126 square centimetres and a scrotal circumference of 37 centimetres.

Mr Mackay admired Pumba’s free movement and soundness, describing him as a good, sound bull with a strong head and sound feet.

The intermediate class was won by the grand champion Kylandee Packsaddle P003 and second place was awarded to Dundee All Towns, exhibited by long-time vendor; Roger Kneipp of Dundee Echo Park Herefords.

The senior division was won by Swanvale Phantom P811, exhibited by the Weller family of Winton, NSW.

Phantom P811 was sired by Warringa Google G23 and tipped the scales at 1020 kilograms, with an eye muscle scan of 124 square centimetres and a scrotal circumference of 43 centimetres.

Phantom also boasted an impressive set of BREEDPLAN EBVs, being in the top two percent of the Hereford breed for all growth traits and in the top eight percent for milk.

Mr Mackay was impressed by Phantom’s soundness and smooth movement around the yard.

Second place in the senior class was awarded to Wendouree Perseus P024, exhibited by Ray and Shane Jamieson of Tara, QLD.

Perseus was sired by Kerlson Pines Jester J99 and weighed in at 1030 kilograms with an EMA of 122 centimetres and a scrotal circumference of 40 centimetres.

Mr Mackay commented that Perseus had a “very smooth shoulder for a bull that weight.”

Mr Mackay was very impressed with the overall calibre of bulls exhibited on the day, describing the bulls on offer as the modern Herefords the breed needs. 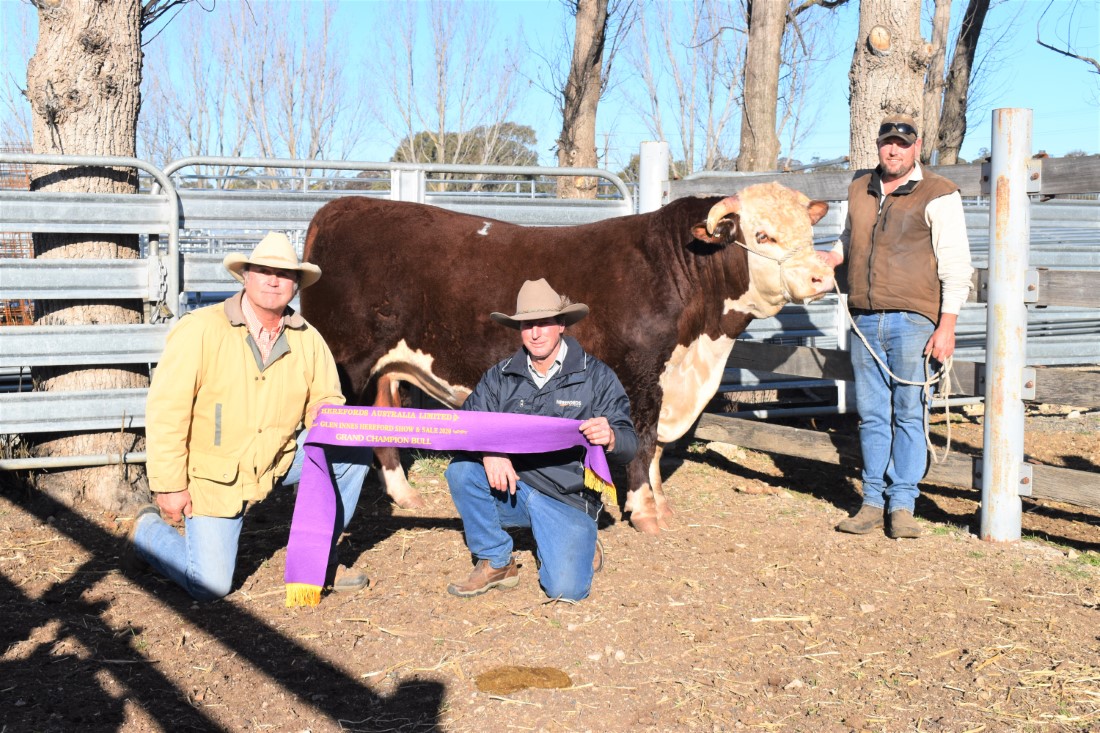 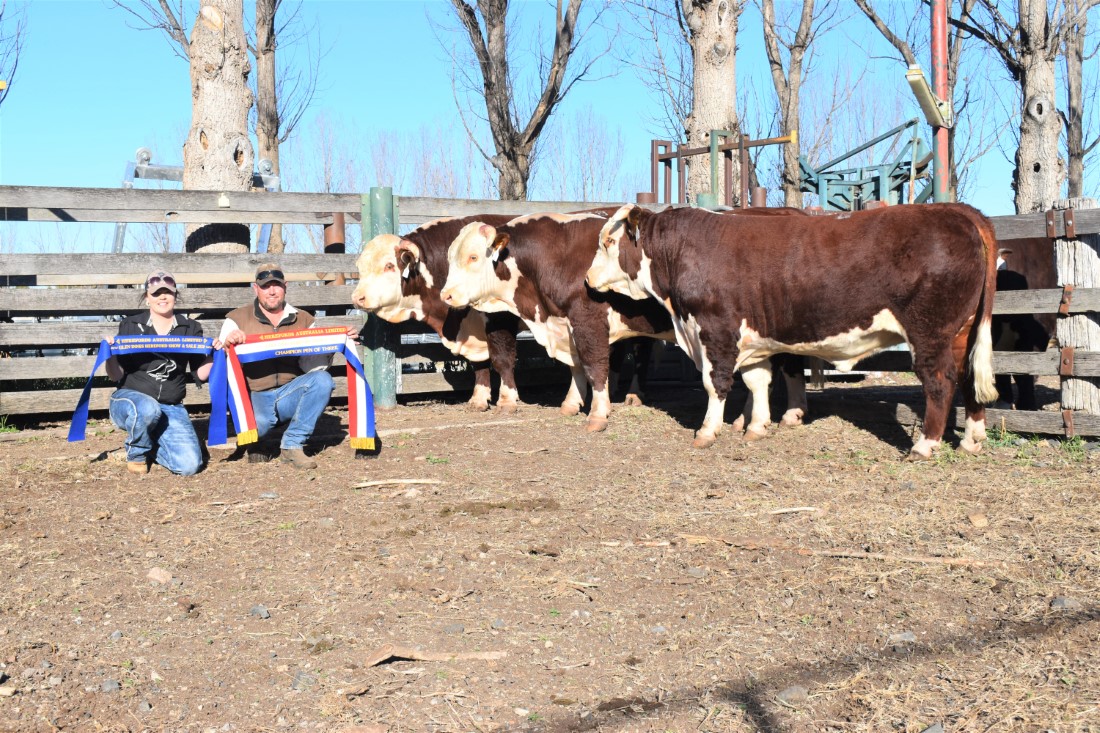 Tanisha Daniel and Brad Thomas of Kylandee Herefords with the champion pen of three bulls. 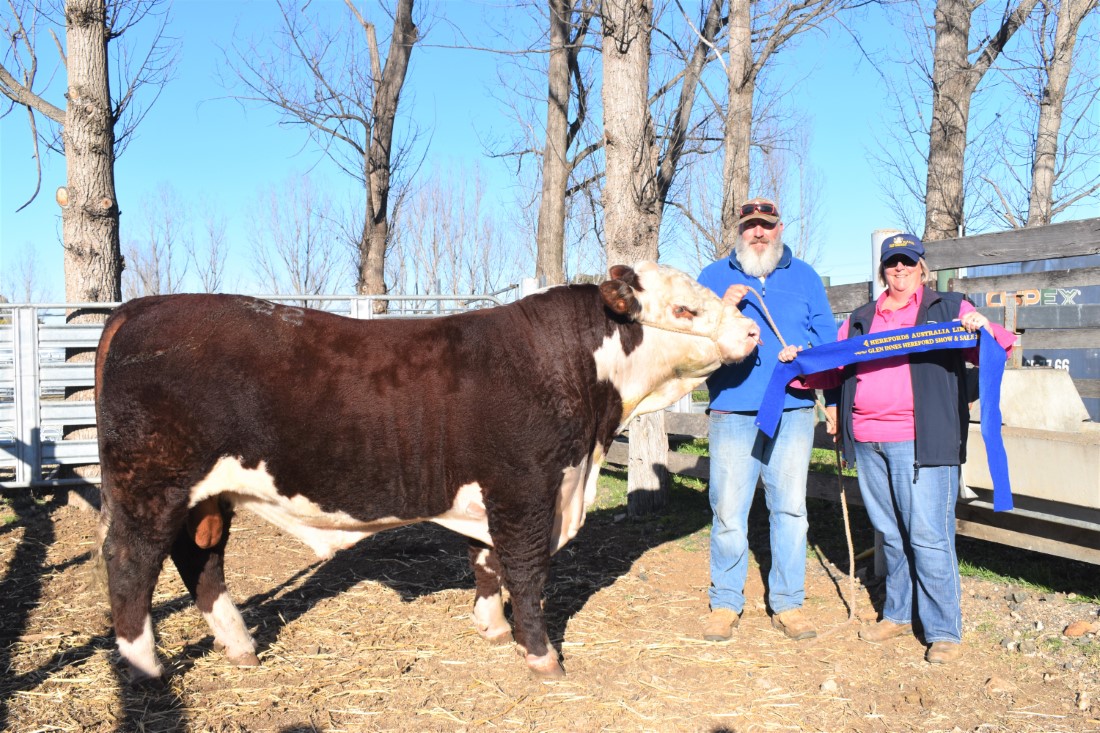 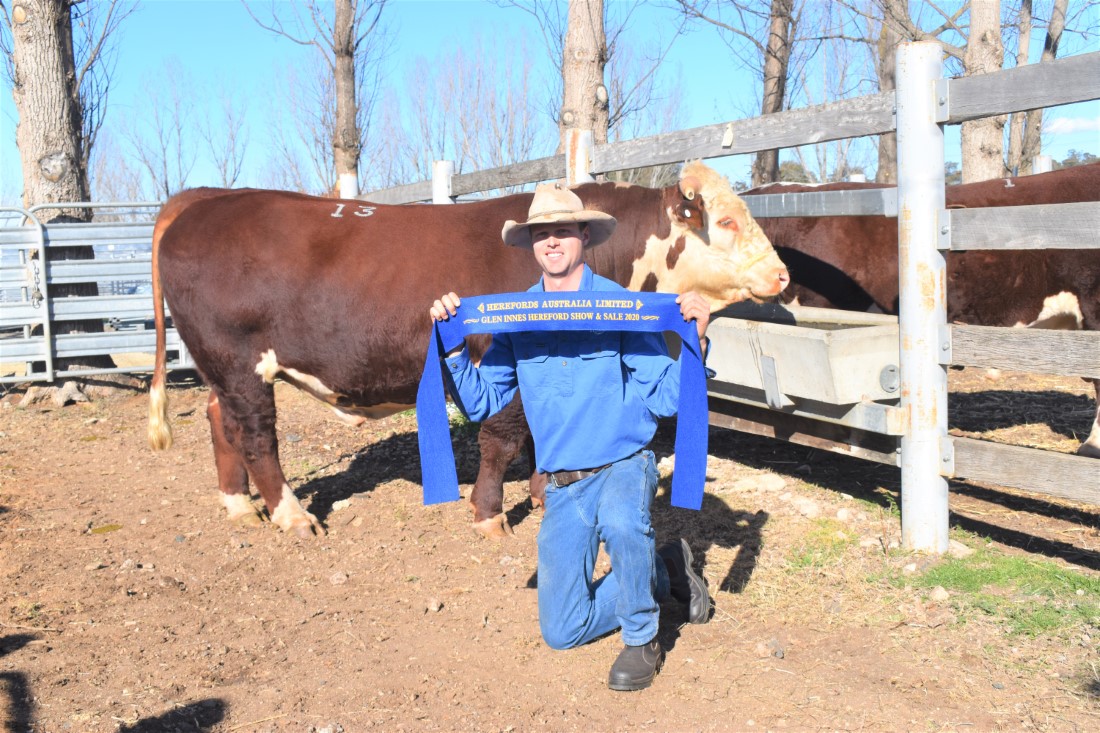 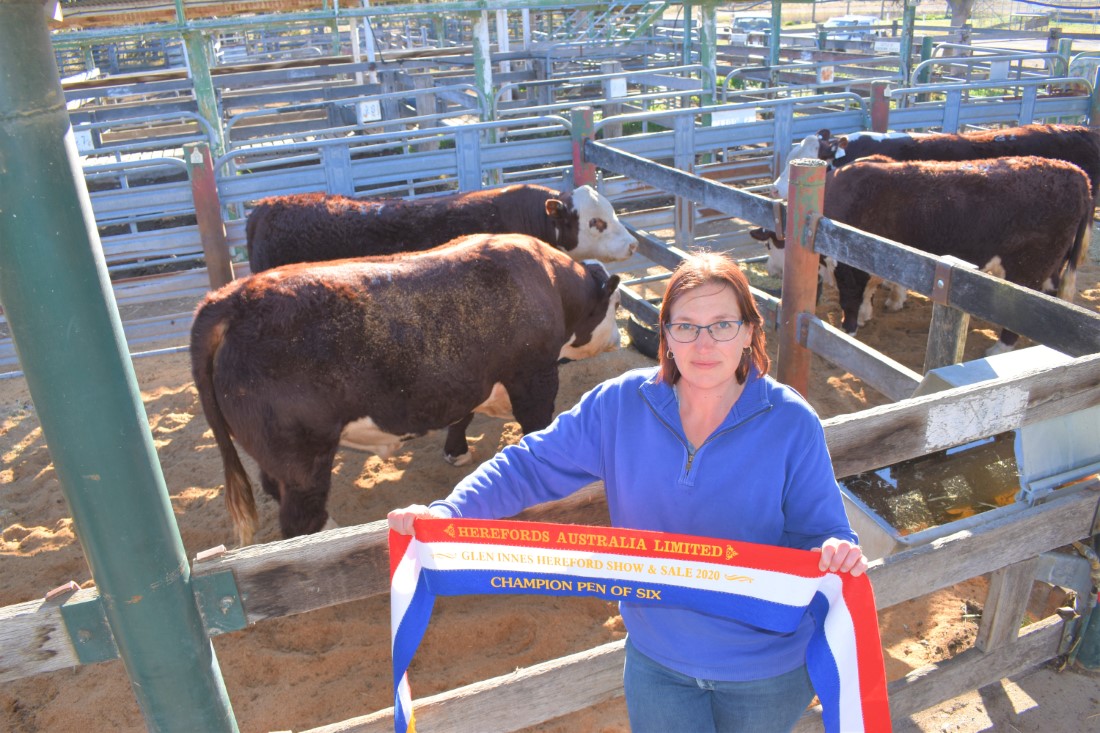 Leanne Rumbel of Supple Whiteface with four of the winning truckload of six bulls. 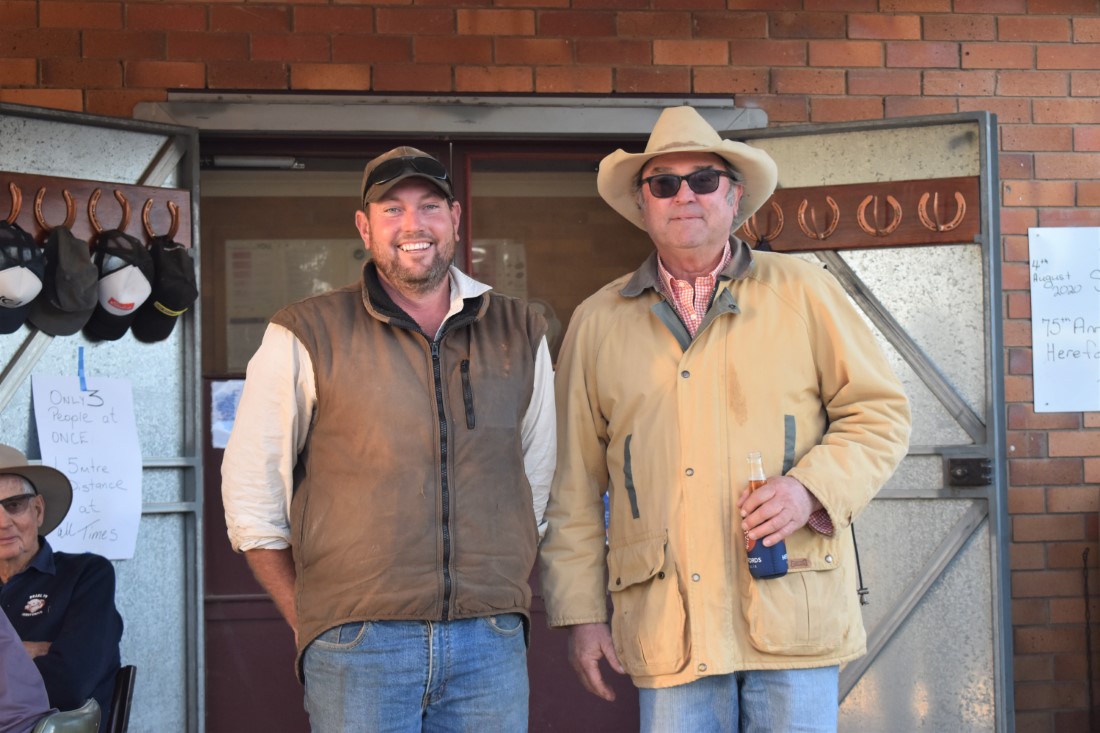 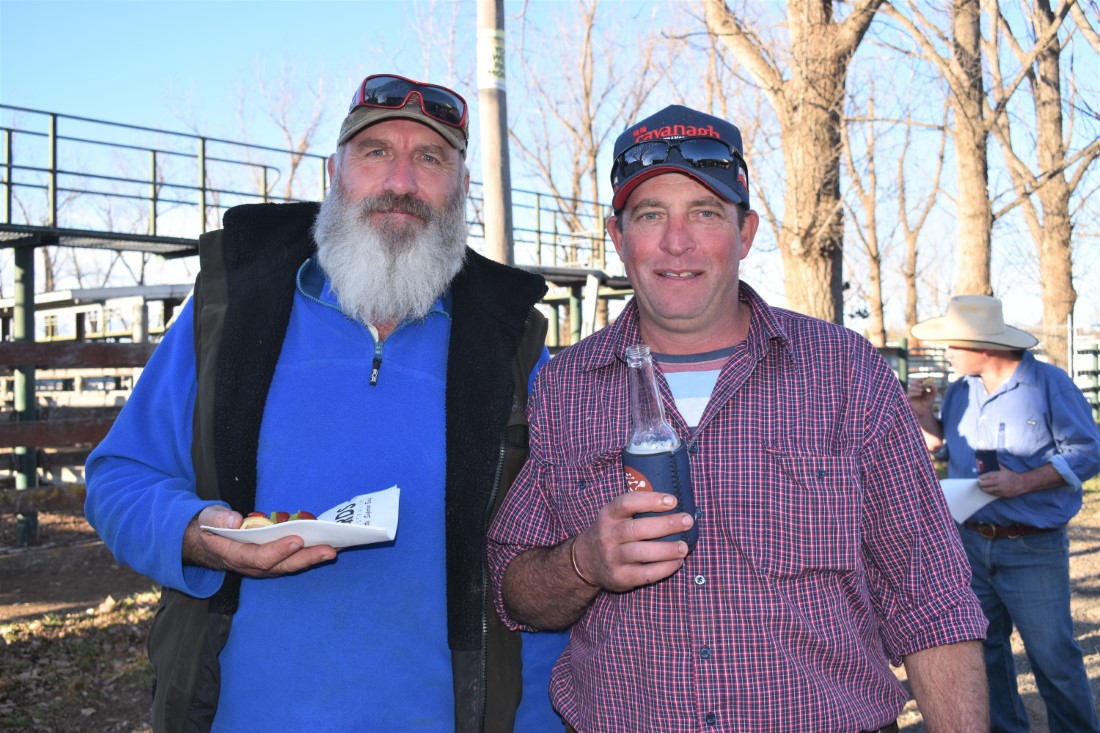 Graham Reeves and Bruce Scott caught up following the show. 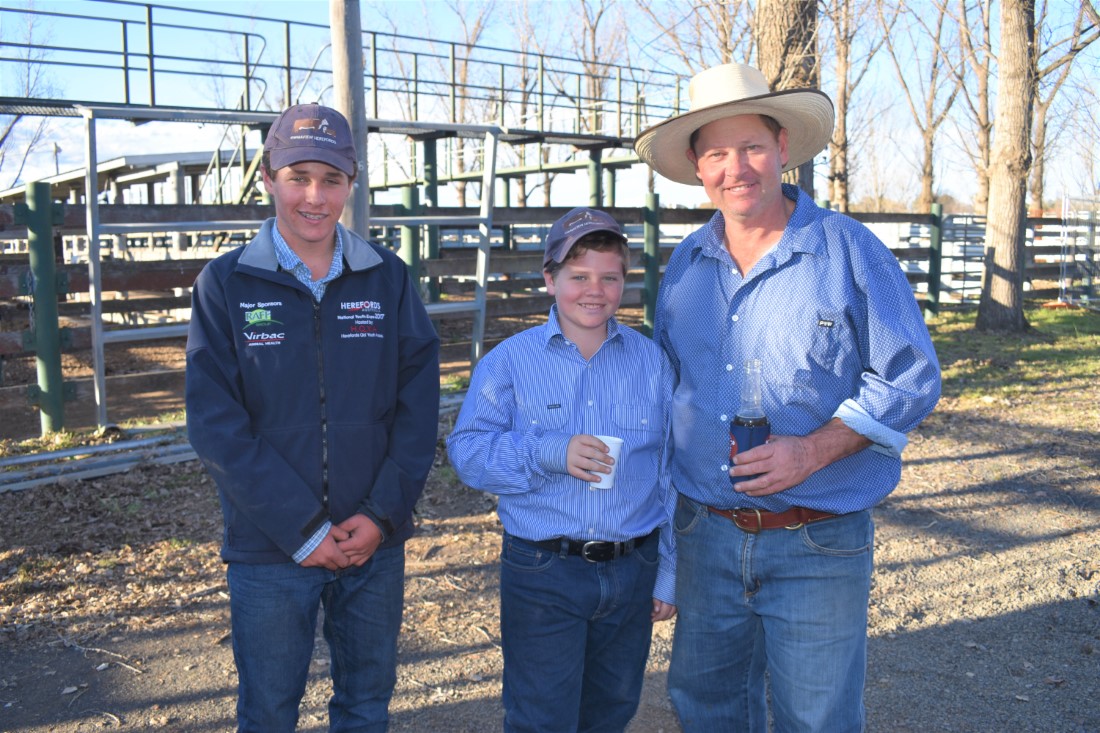 The youngest vendors at the 75th Annual Glen Innes Show and Sale; Lachlan and Riley Bacon of Ownaview Herefords with their father John Bacon. 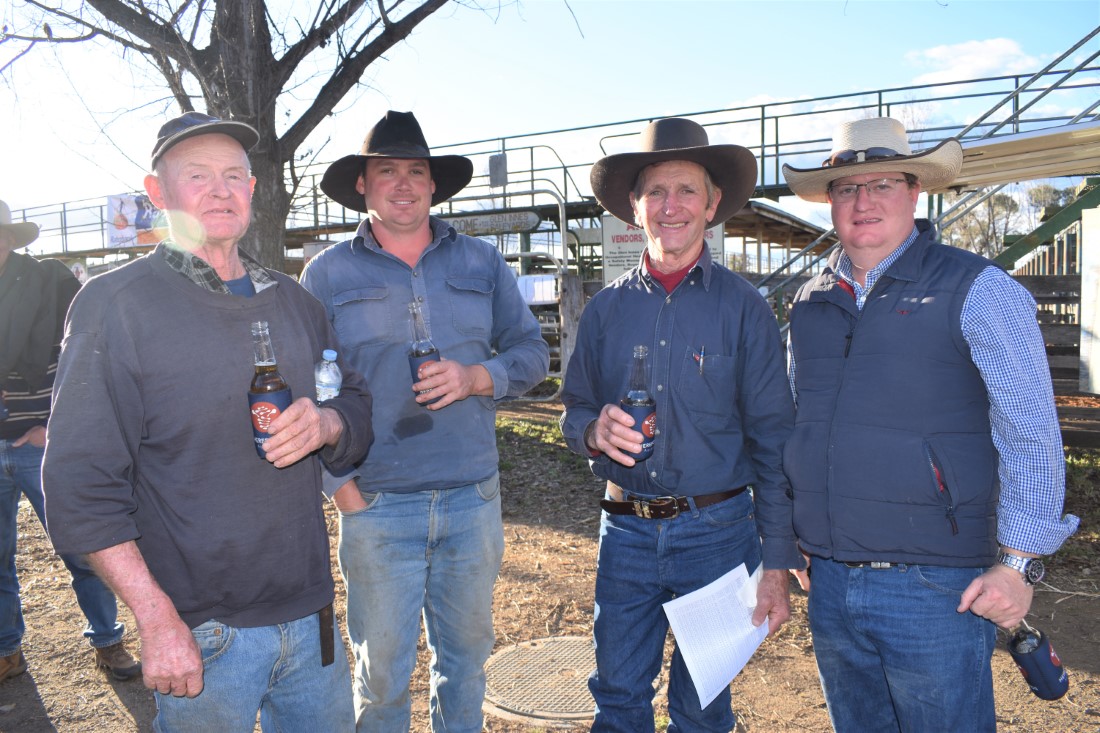 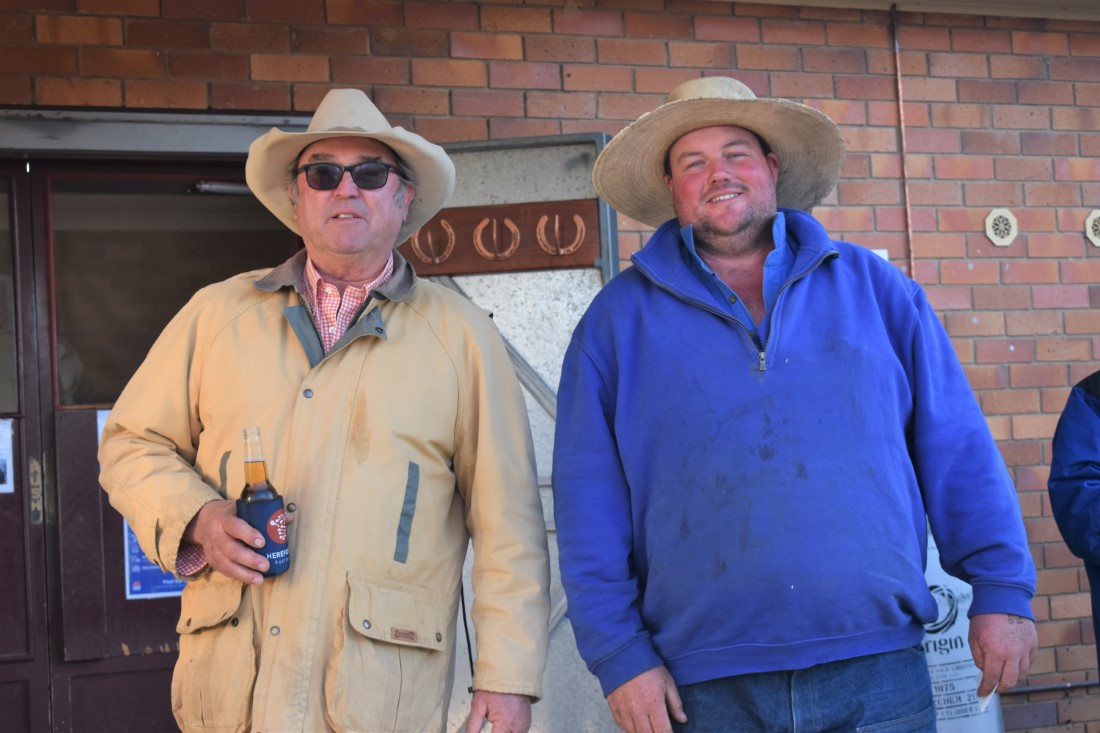