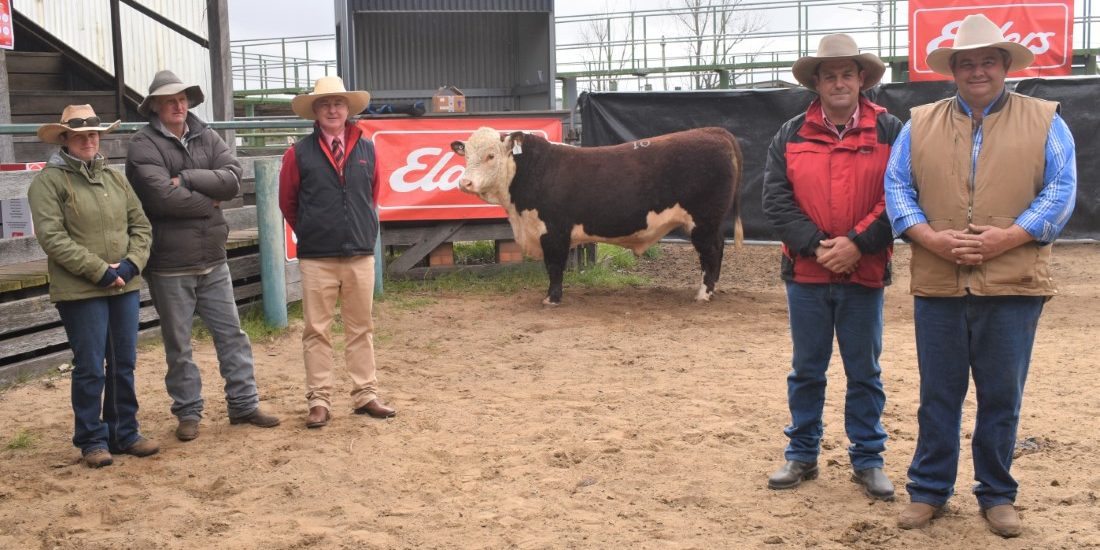 Elders Glen Innes conducted the sale with 36 of 49 bulls selling under the hammer for a sale clearance of 73 percent while several of the passed in bulls sold immediately after the sale.

The top price of $17,000 was paid for Couralie J L285 Ledger P022, offered by Jim and David Hann of Courallie J Herefords, Narrabri.

Ledger P022 was sired by Wirruna Ledger L285 and weighed in at 875 kilograms with an eye muscle area scan of 133 square centimetres and a scrotal circumference of 40 centimetres.

Liz Coward said they have had success with Courallie J bulls before and liked Ledger P022’s confirmation and general appearance.

“He’s just a really neat, nice looking bull all over. He has really nice confirmation and we really liked him,” Ms Coward said.

The Cowards run a purebred commercial Hereford herd where they usually turn their steers off at 18 months to feedlots or processors, depending on feed availability.

David Hann of Courallie J Herefords said they were very happy with their sale result, having offered and sold five bulls on the day; three through the ring and two immediately after the sale.

According to Mr Hann their stud has been focussing on breeding bulls with muscle, volume and growth with length.

“The drought has obviously made it a bit difficult for everyone, but it’s onwards and upwards from here as long as the season stays with us,” Mr Hann said.

The second top price of $14,000 was paid twice, firstly for the grand champion and yardsmen’s pick Kylandee Packsaddle P003, offered by Phil and Brad Thomas of Kylandee Herefords, Inverell.

Packsaddle P003 was purchased by Chris Lisle of Tummel Herefords, Walcha for use in his own stud operation.

Sired by Talbalba Line Up L203, Packsaddle was the heaviest bull in the catalogue, weighing in at 1055kg with and eye muscle area scan of 137 square centimetres and a scrotal circumference of 48 centimetres.

Packsaddle also had the highest daily weight gain of the 49 catalogued bulls at 1.43 kilograms per day.

Mr Lisle is a repeat purchaser from the Kylandee program and was impressed by Packsaddle’s confirmation and carcase data.

“I like his overall confirmation; he has a great outlook about him. He has terrific EMA and good weight gain,” Mr Lisle said.

The second bull to make $14,000 was Dundee All Towns, offered by Roger Kneipp of Dundee Echo Park Herefords, Dundee, NSW.

Mr Kneipp is a long-time supporter and attendee of the Glen Innes Show and Sale, having attended every horned show and sale in the event’s 75-year history.

Purchased by Dommie Cook of Sherwood Herefords, Wauchope NSW, 23-month-old Dundee All Towns was sired by Battalion Archer and tipped the scales at 955 kilograms with an EMA scan of 128 square centimetres.

The third highest price on sale day was $13,000 which was paid by Ron Drew of Glencoe for another Kylandee bull; Kylandee Prospect.

Prospect was sired by WRL Lancelot and weighed 960 kilograms with an EMA of 130 square centimetres and a scrotal measurement of 45 centimetres.

Mr Drew has been interested in the Kylandee program for several years and was drawn to Prospect’s cosmetics and temperament.

“I liked the lovely colour and softness of him and his nature.

“I’ve always followed Phil’s bulls, he’s only got a little stud and he always ends up with a good lot of bulls,” Mr Drew said.

Mr Drew runs a commercial Hereford/Santa crossbreeding operation where he sells his progeny as weaners at the Glen Innes weaner sales.

Brad Thomas of Kylandee was thrilled with their stud’s results on sale day having sold all five of their bulls to a gross of $52,000 and an average of $10,400.

The Kylandee herd is focussed on consistency and meat with a heavy emphasis on maintaining a strong female line.

“We just want to breed a bull that’s consistent and used in many herds, from crossbreeding to straight Herefords, and we love seeing the bulls go back into studs.

“We’re still doing the same thing; we’re still based around our females. We’re very hard on our females because it’s so hard with such a small number – we’ve got about 17 females,” Mr Thomas said.

“I’m really pleased with how it all went, the average was pretty good and from what I’ve heard it’s going to be about an 80% clearance because a lot of the bulls have sold that were passed in, so it’s fantastic,” Mr Vivers said.

Mr Vivers is retiring as committee chairman after holding the role for 10 years but is delighted to have seen the sale make 75 years and says he hopes to see the sale make 100 years.

Selling agent Andrew Meara of Elders was also very pleased with how the sale went with a good spread of buyers from commercial and stud operations and a solid clearance rate.

“I think the better bulls sold exceptionally well and we got a fair few into different studs around the place.

“We had a fair few different buyers from different areas and a few new ones, so it was very pleasing,” Mr Meara said. 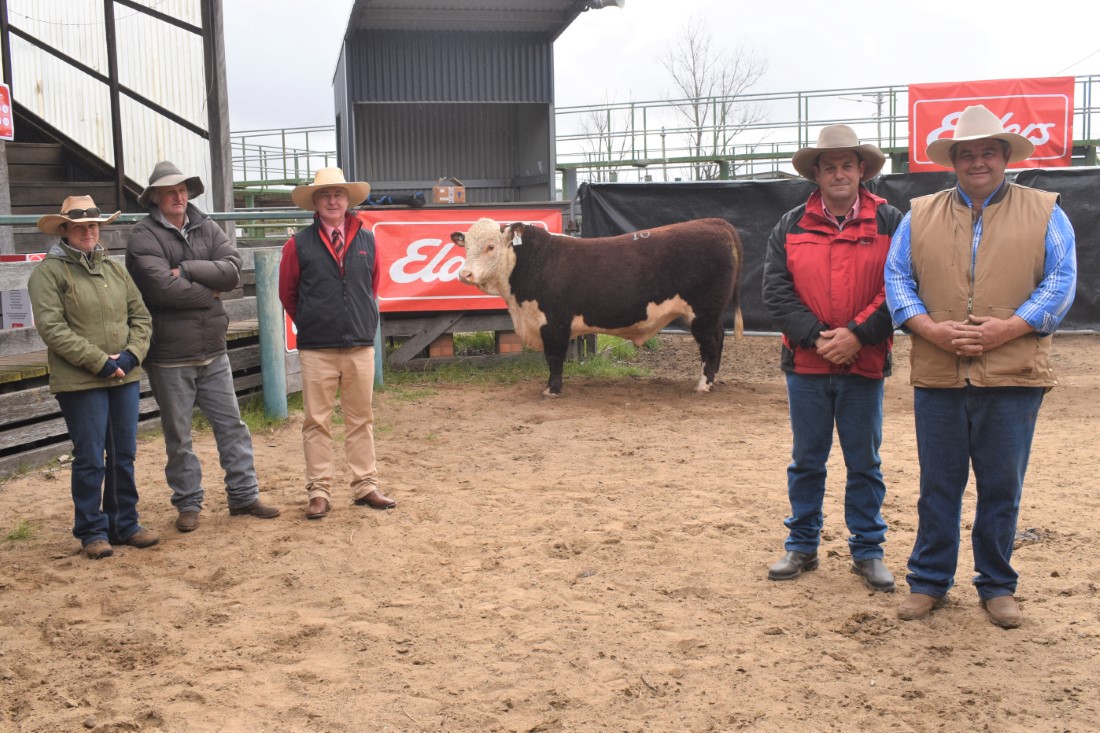 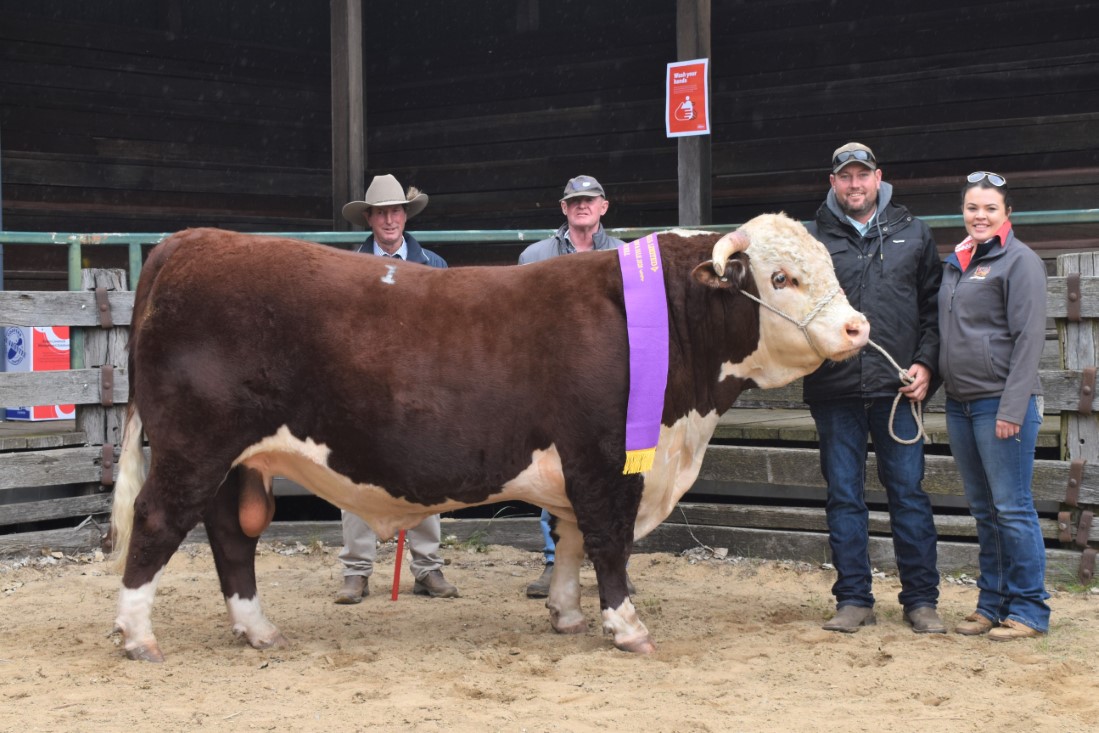 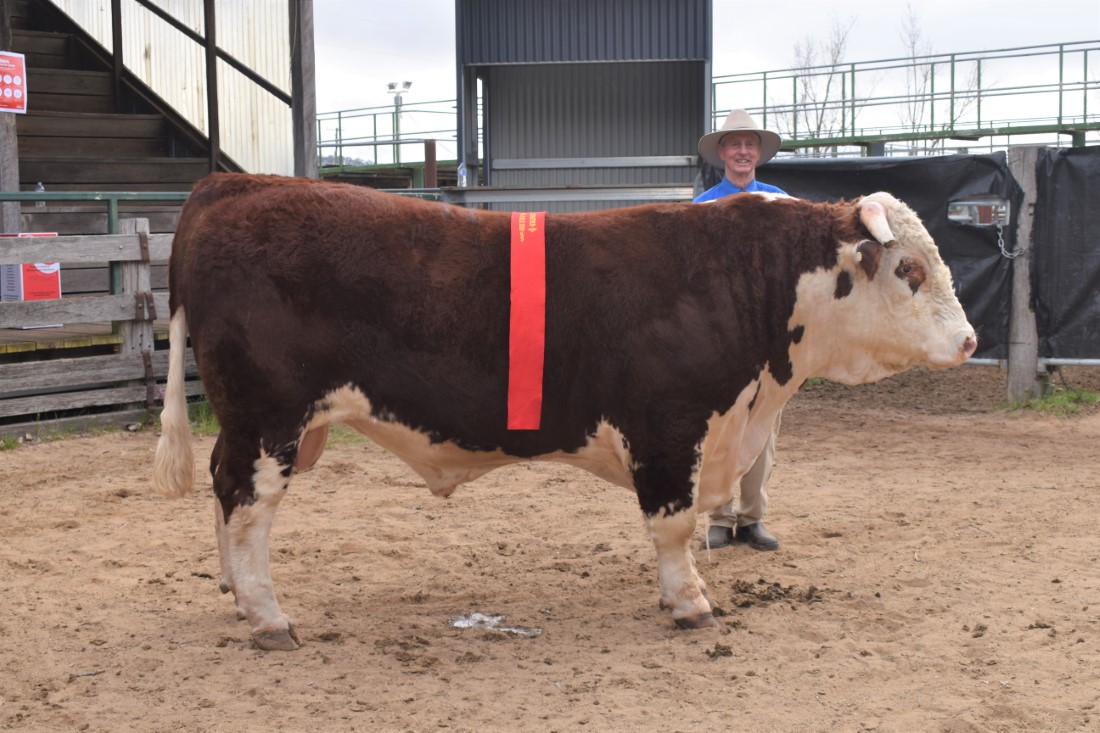 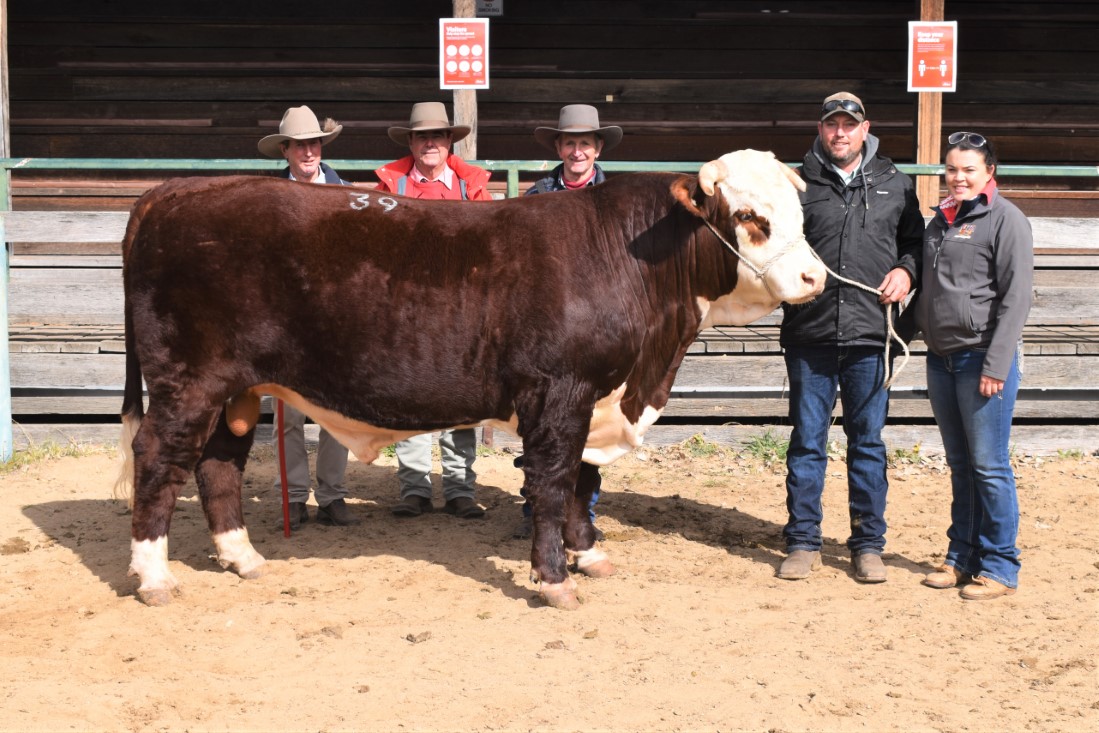 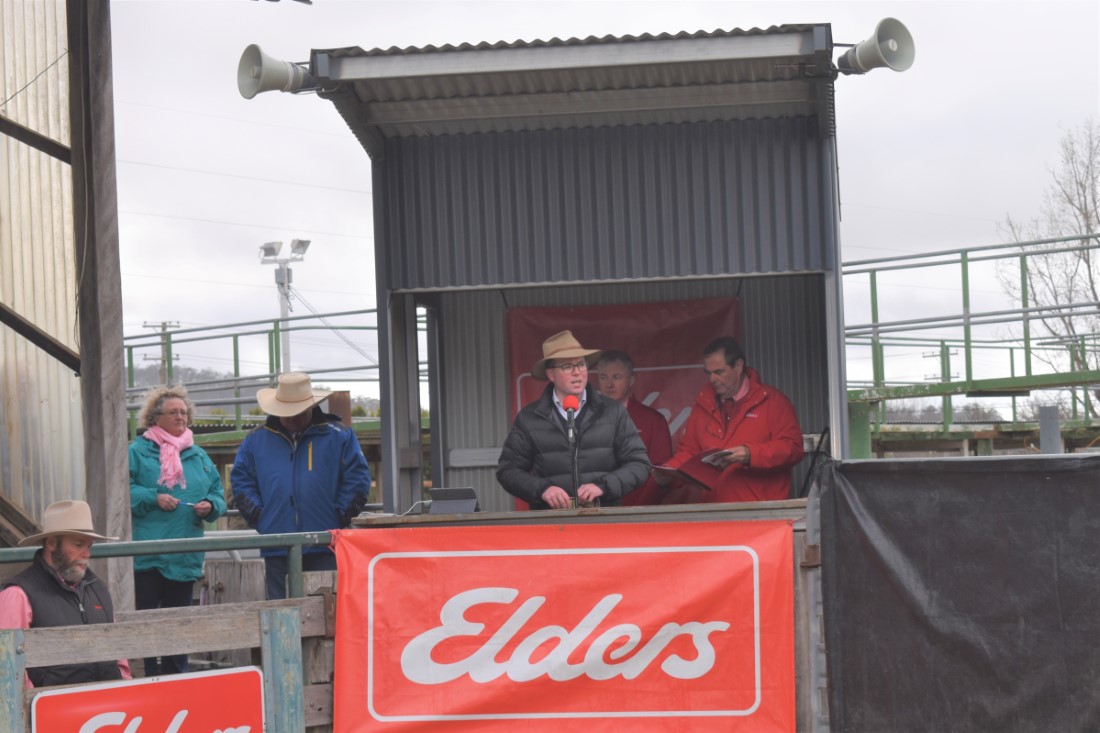 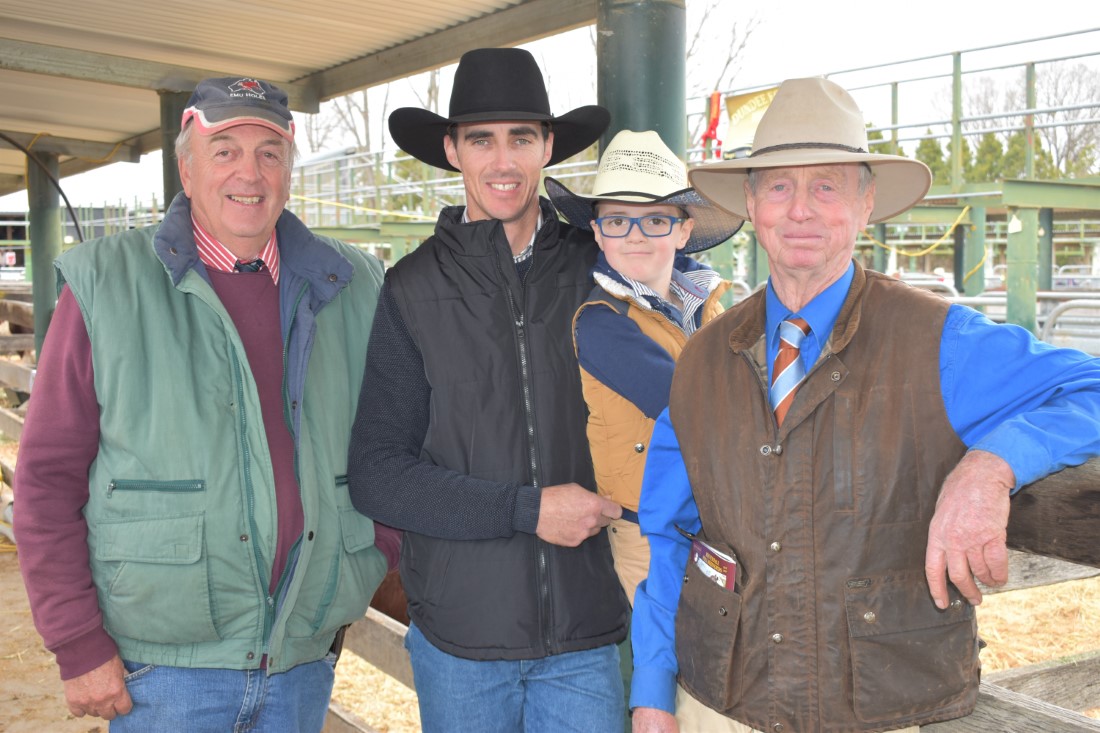 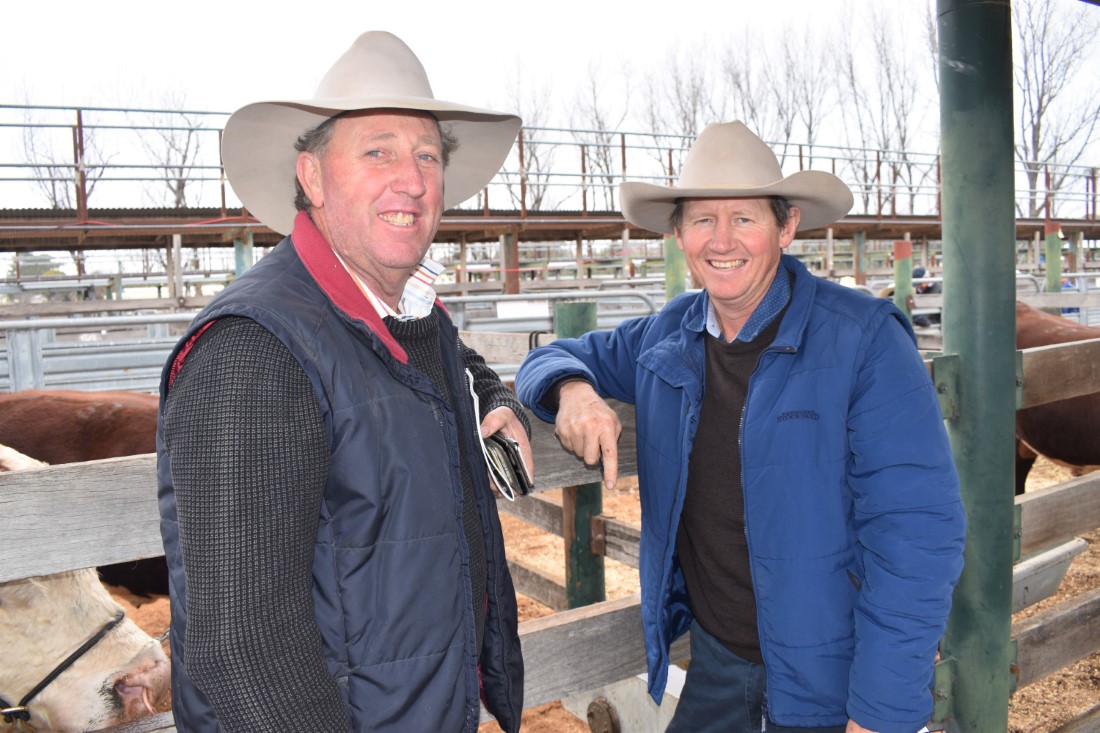 Scott Hann of Truro Whiteface and Ben Monie of Thornleigh Herefords caught up prior to the sale.