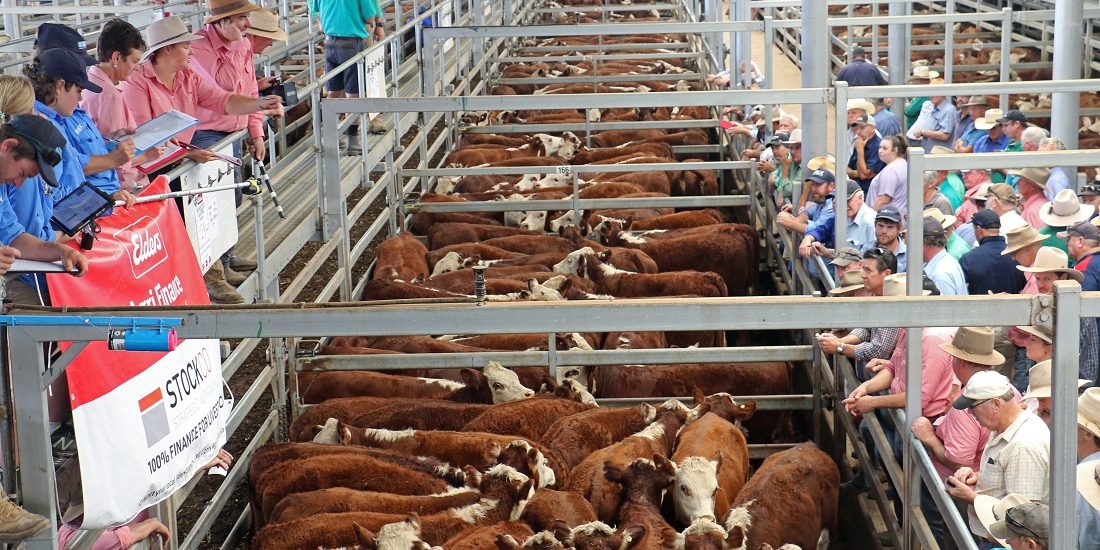 Hereford calves were highly sought after for certified grass fed programs at the Wodonga Premier Hereford Euro and Other Breeds Sale, with prices jumping 30c/kg on the previous day.

With many buyers and agents absent due to ongoing fires, a small crowd pushed up prices on the steer weaners however heifers met with subdued demand, with prices easing by up to 30c/kg.

Topping the purebred weaner offering on a dollars per head basis was David Sleigh, Sleigh Pastoral, Ruffy, Vic, with a pen of 25 Allendale blood, Bayunga bred steers, 356kg, and selling for $1120 or 314c/kg to Phil Gledhill, Elders Holbrook.

Mr Sleigh offered 98 head, saying weights were 20-30kg down on the back of an ordinary season.

The cattle sold above his expectations of $1000 or 280-300c/kg. Steven Oliver and his daughter-in-law Lucy Oliver paid 322c/kg for the Sleigh Pastoral’s run of 50 steers weighing 319kg for the family’s Everton property.

Richard Long, Howitt Plains, topped the yarding on a cents per kilogram basis at 336c/kg (up 5c/kg on the same sale last year) for a draft of 34 Yavenvale, Glentrevor and Wirruna blood steers, weighing 301kg.

They were snapped up by Phil Gledhill for a Holbrook steer finisher.

Richard Long uses Hereford bulls in the top one per cent for intramuscular fat, top five per cent for eye muscle area and growth, and had yard weaned the calves in December.

The annual run of bullocks and heavy grown steers from Alistair McKoy, Ohio, Holbrook, was bought by Neale Flanagan, JBS and Andrew Lowe, Ladysmith feedlot, and topped at $1420 for 20-22 month-old steers weighing 571kg.

There was not enough lighter weight purebred steers penned to quote on.

Corryong school bus driver Bernie McNamara was unable to see his steers win the Herefords Australia champion pen as he was busy with fires in the Nariel Valley.

Judge Graeme Ward had bought bullocks off Mr McNamara in the past for Queensland buyers.

“They hang up well, yield, have plenty of bone and softness – they are great performers,” Mr Ward said.

Cecily Trickett, Culcairn, has taken over the herd of the late Isobel Webb, who was Australia’s oldest commercial Hereford producer at 101 before she passed away in 2018.

Mrs Trickett said she was pleased to carry on the legacy for Isobel.

“It was good to get them here, they presented well and were quiet,” she said.

“We are having an ordinary season and are running around 200 cows.”

“I’m happy enough with that price – the weights were good considering the season and the fires are not that far away,” he said.

“I sold same age black baldy steers weighing 335kg for $970 or 289c/kg – the temperament of the Herefords is good and they continue to do well.”

“They have a good temperament and do well – we will put 100kg on them and sell them,” Mrs Kennedy said.

“The heifers are quite buyable today considering the season.”

“As we rolled through into the weaners, there was less commission buyer and feedlot competition and more backgrounders chasing those good quality Hereford steer calves to tuck away for a grass fed program,” Mr Shea said.

“There was a fair bit of repeat competition on the Hereford run.

“Obviously our thoughts are with those people affected by the fires but if you had of said we would get a top of 336c/kg today…so for the job to have held up as strong as it has shows a lot of confidence in the cattle market for 2020.’’

Mr Shea said the front lane of Hereford calves were well sought after, were annual drafts and clearly performed for buyers.

“The top priced calves at 336c/kg showed a lot of depth and muscle, with vendor Richard Long himself commenting they were probably the best calves he had lined up here for sale,” he said.

“Buyer Phil Gledhill will put those cattle away for a certified grass fed program for spring 2020.

“A highlight of our two week of sales has been this run of Hereford calves sold today.”

Mr Shea said JBS were rock solid on the heavy end of the heifers for lot feeding.

“There was a drop off in competition on the lower weights as those cattle will need backgrounding first.”

With regard to the fires, several vendors were unable to send their full compliment of numbers originally entered.

“Our numbers haven’t been severely affected by the fires in the district,” Mr Shea said.

“Our Tuesday fat market was the first selling cattle out of the fire affected areas and we expect that to continue throughout the next few weeks.”

Two five-litre drench packs were donated by Elders and raised $1500 for bush fire affected farmers on the day. 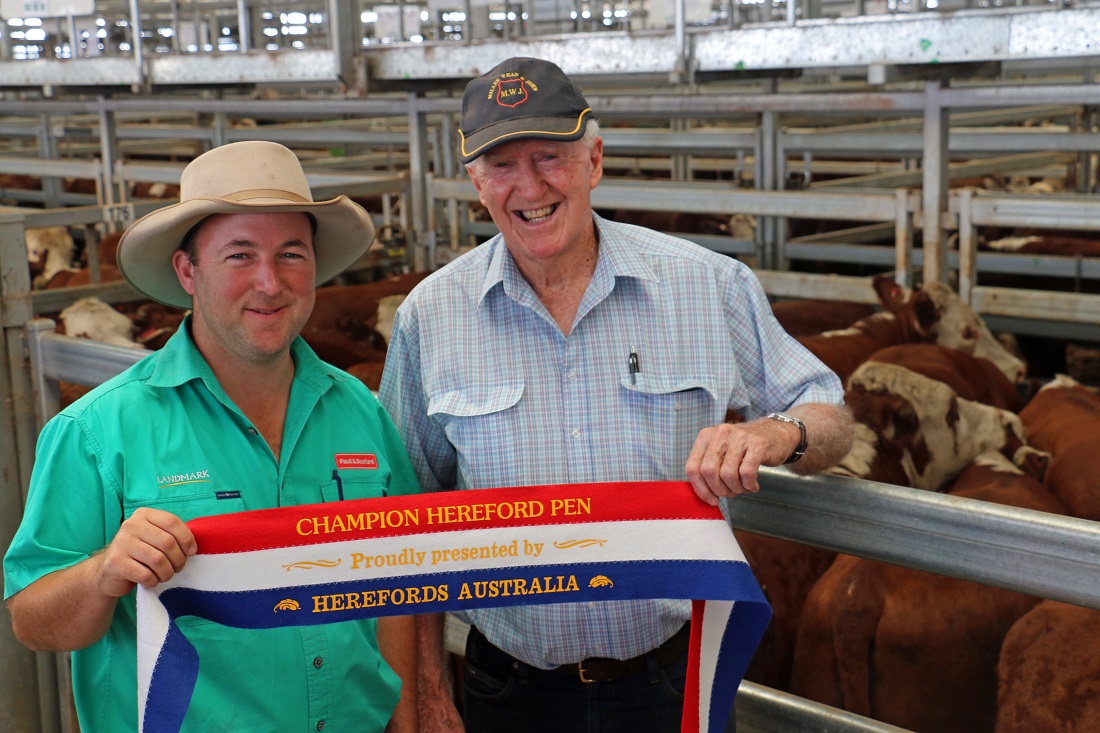 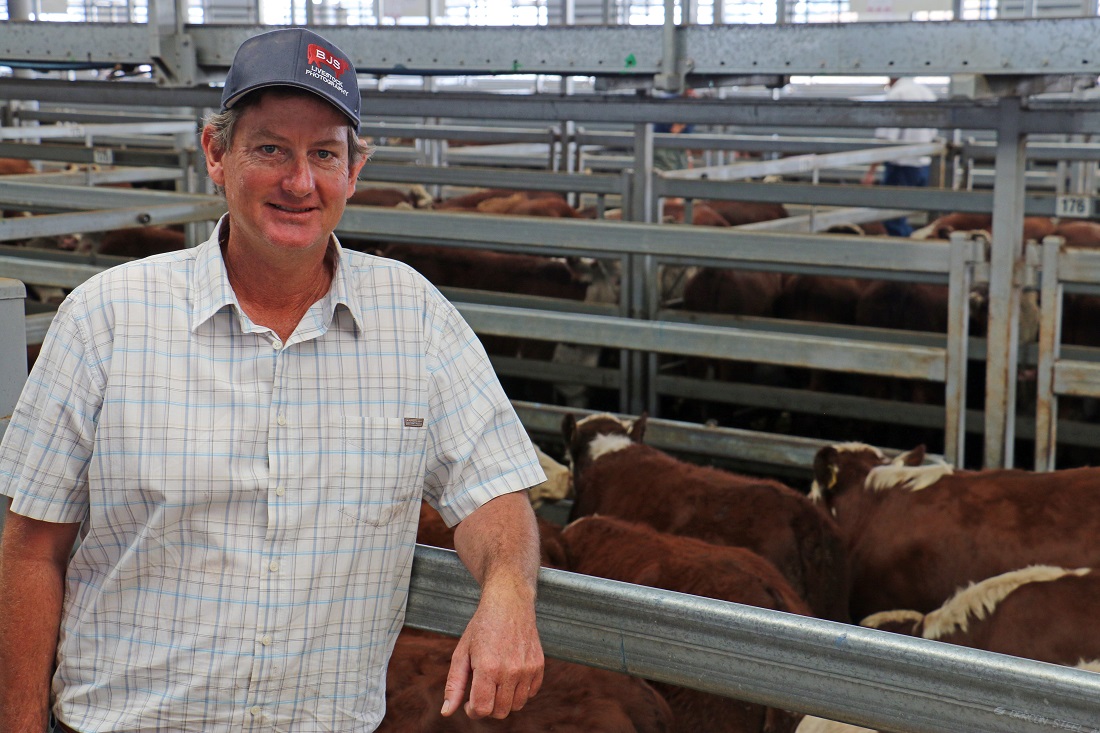 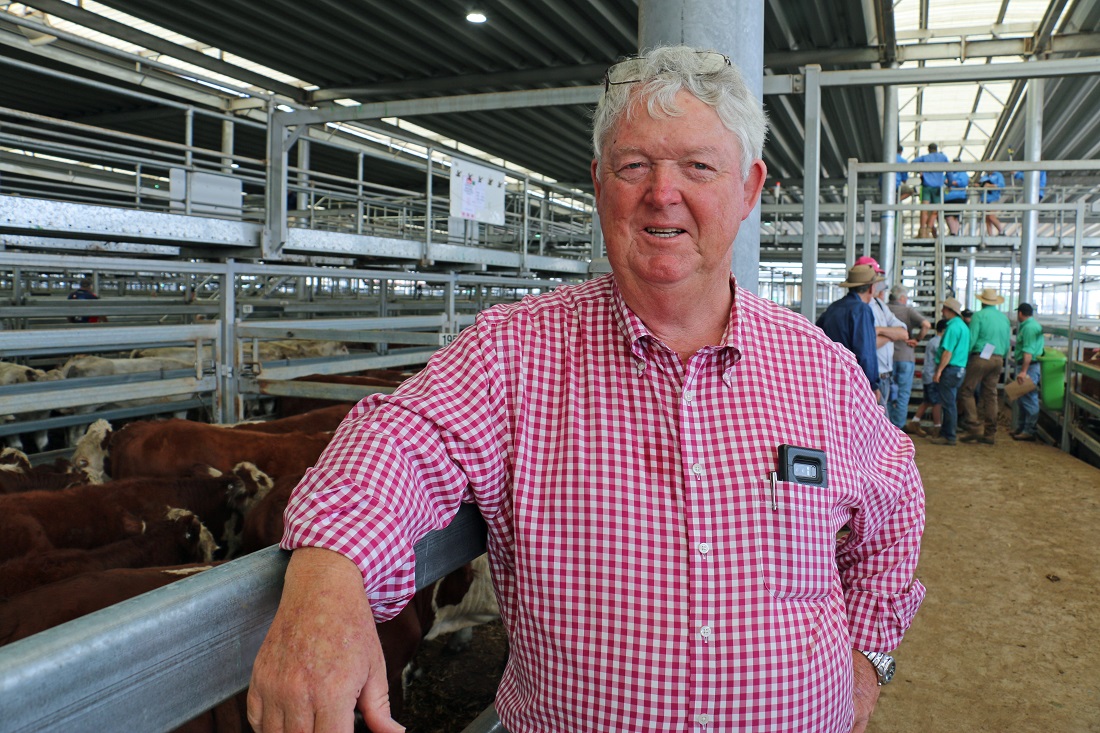 Bob Holdsworth, Warwick Court Herefords, was among the crowd at the sale. 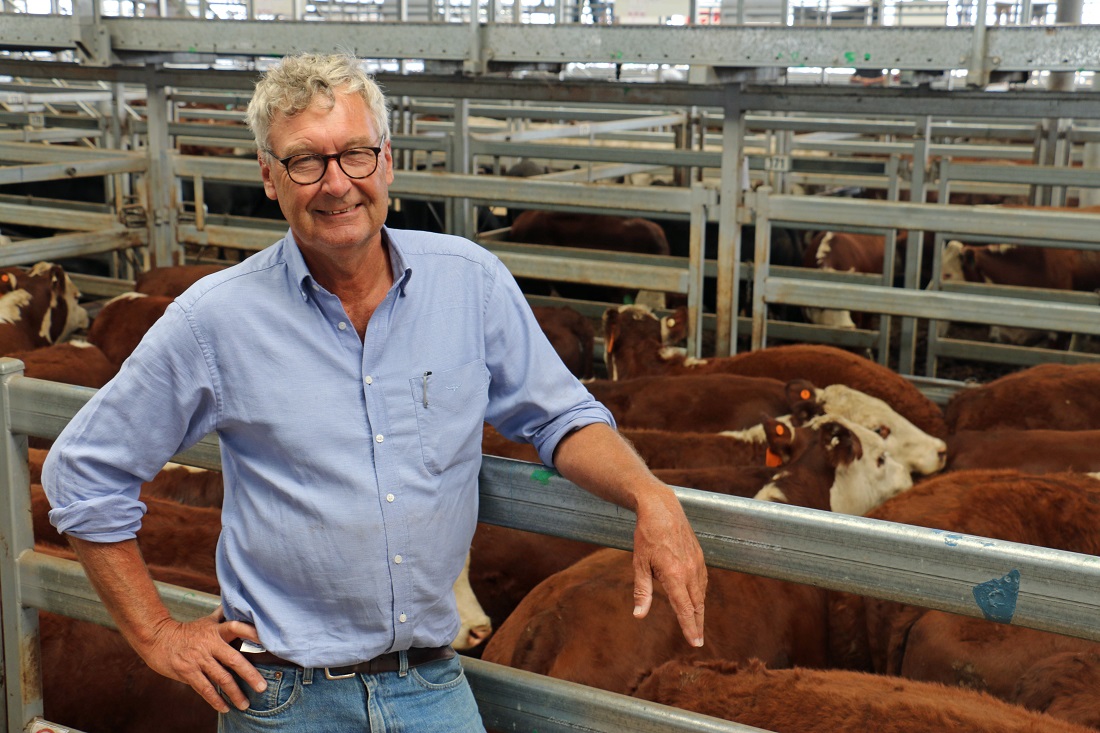 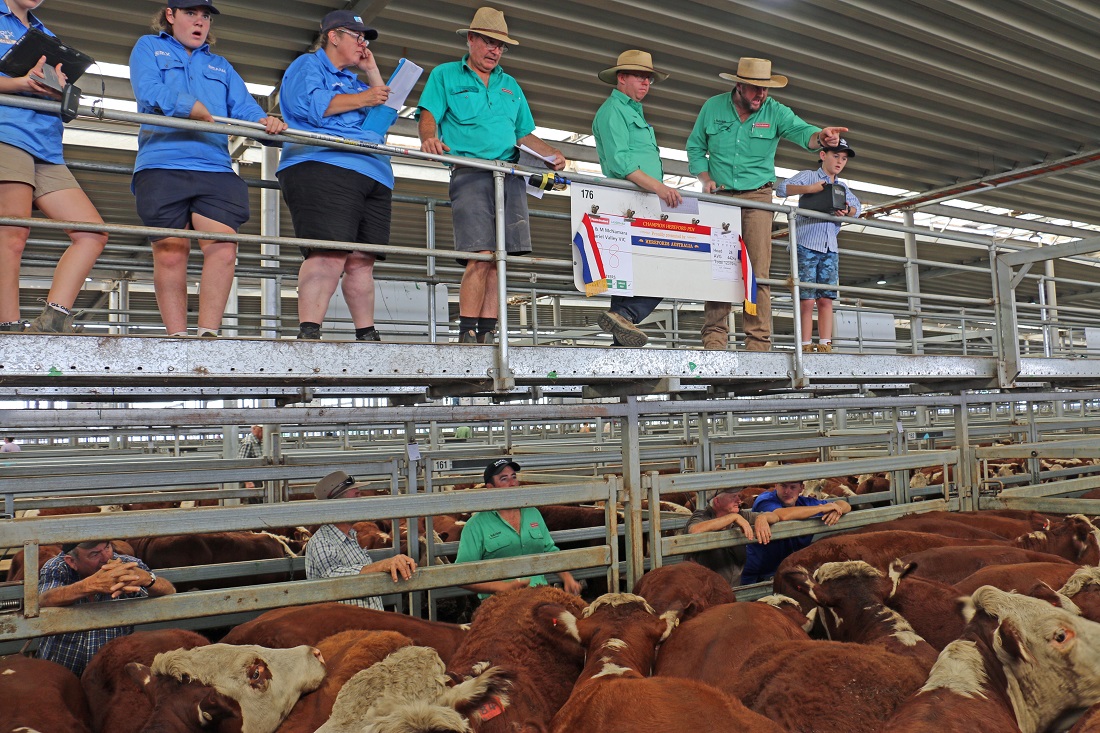 The Paull & Scollard Landmark team knock the champion Hereford pen down for $1310 or 296c/kg. 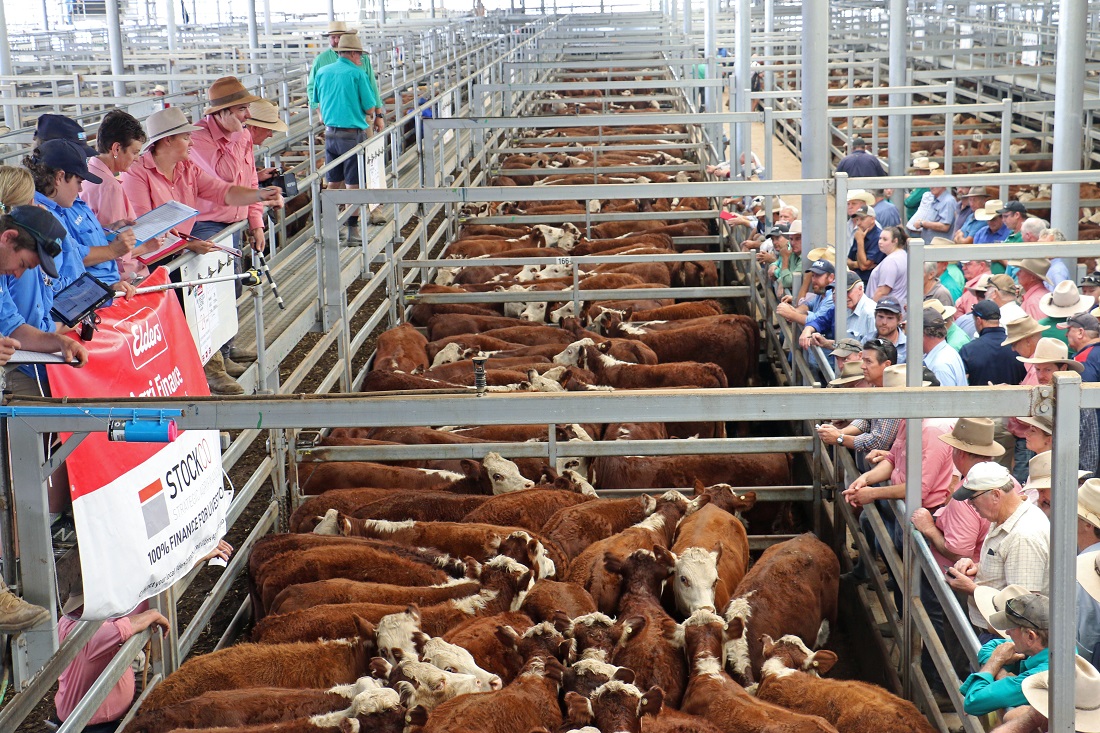 The middle run of purebred weaner steers sold for 249-314c/kg. 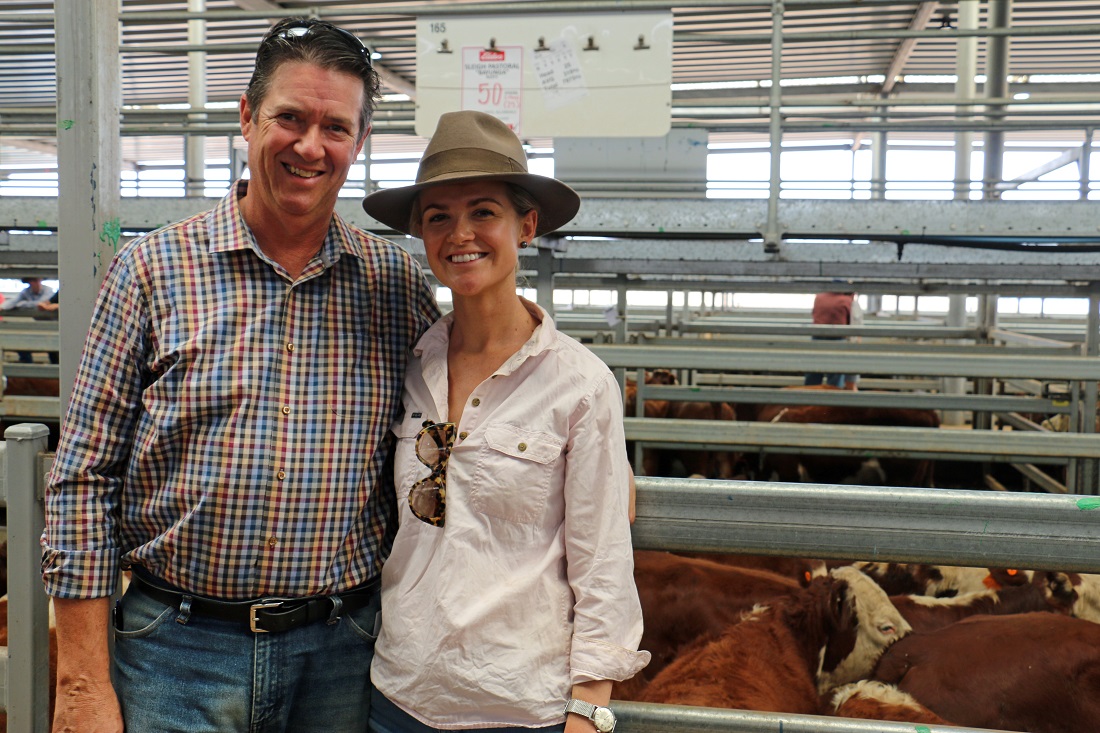 Steven Oliver and daughter in law Lucy Oliver, of Everton, paid $1030 or 314c/kg for a line of 50 Bayunga bred steers, 319kg, from Sleigh Pastoral, Ruffy. 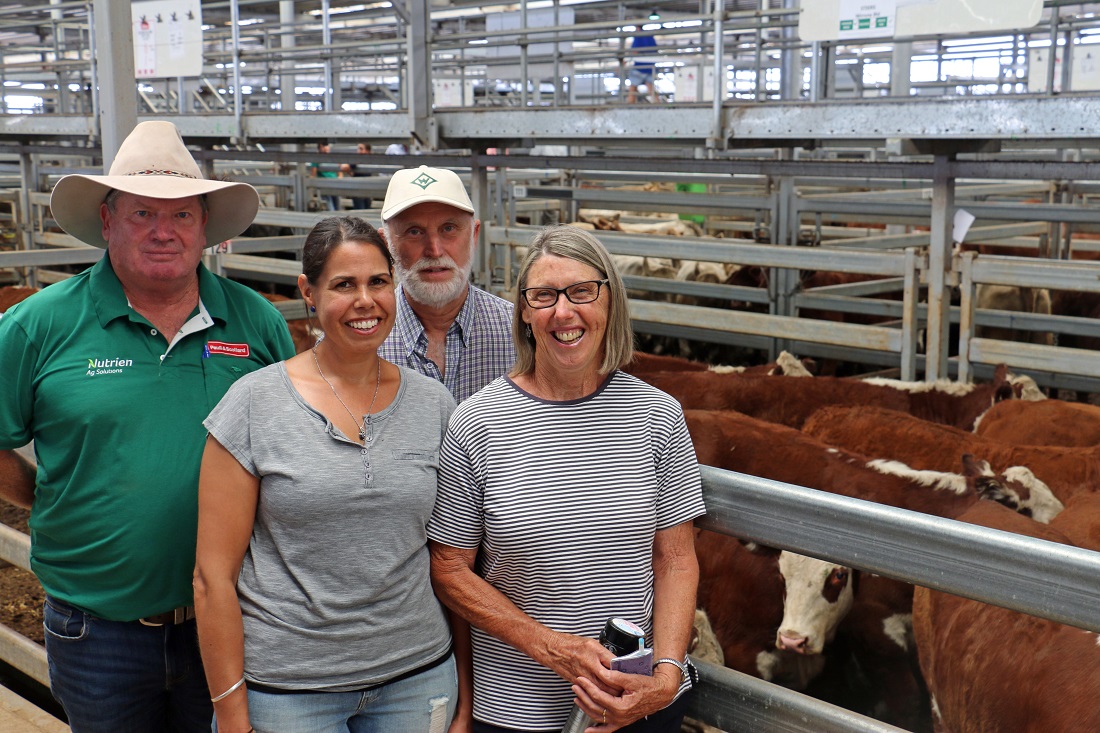 Mark Breen, Paull & Scollard Landmark, with Stephen and Cecily Trickett, Culcairn, and Katrina Trickett, Melbourne, after selling weaner steers to a top of 306c/kg at Wodonga. 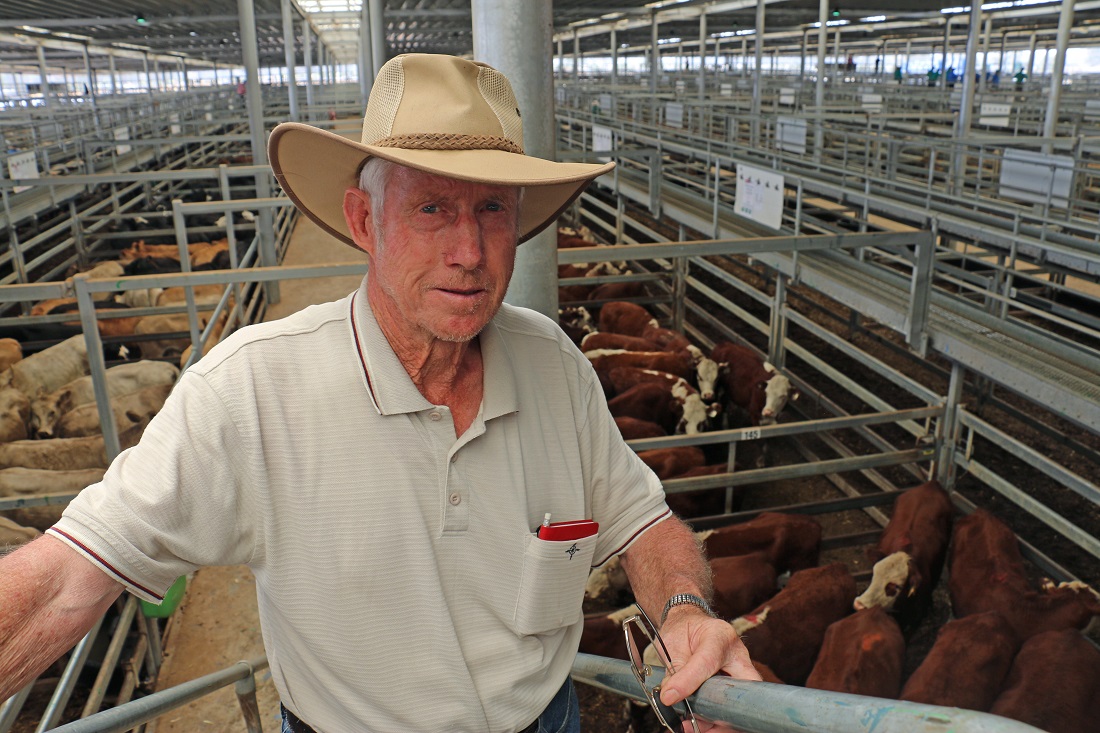 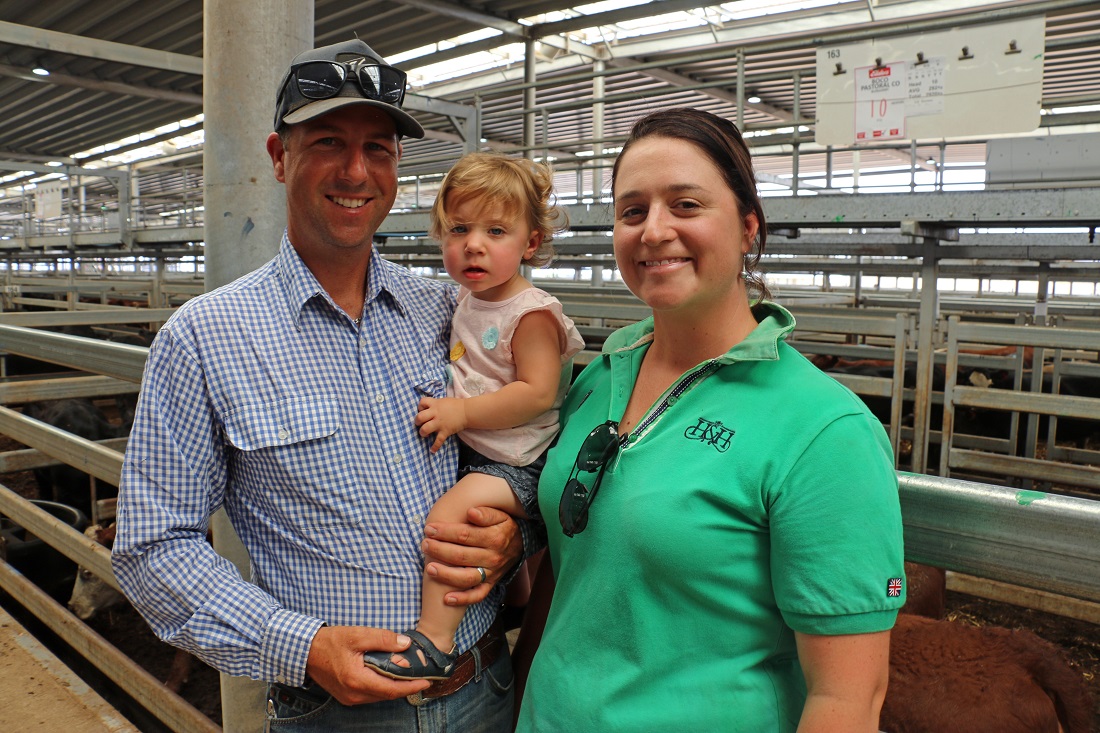 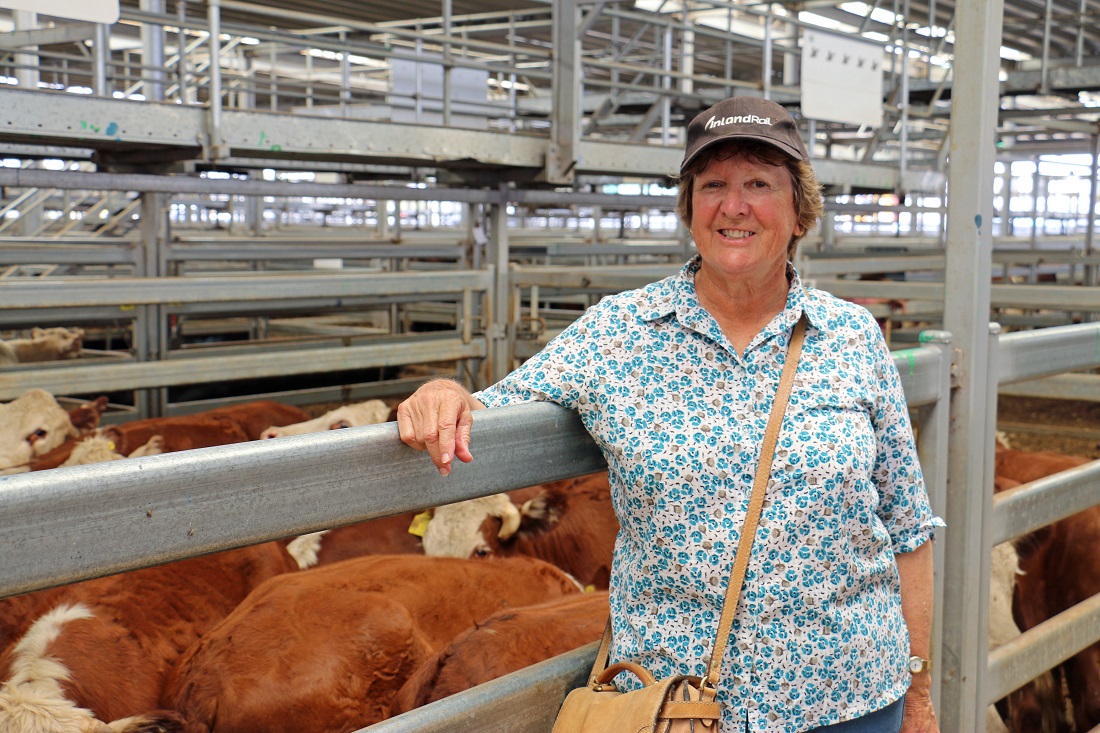