Buyers Bid to $1374 for Hereford Steers at Hamilton 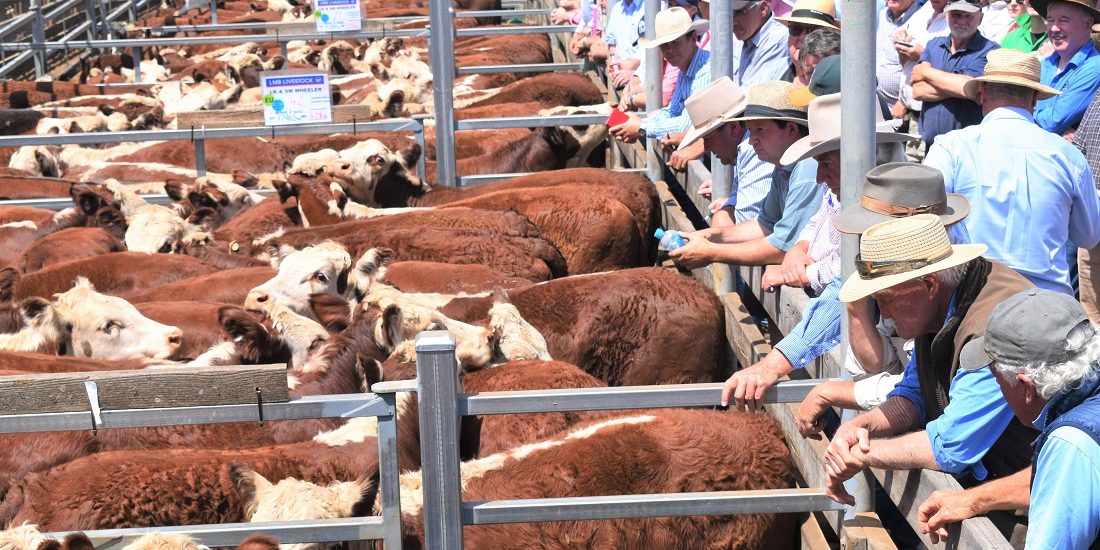 Local agents yarded 2586 head with around half the yarding being purebred Herefords.

Lot feeders and repeat buyers made up the bulk of the buying strength with a few local buyers keeping the market strong.

A premium on quality EU cattle was once again in play, lifting prices above expectations and the rates of last year’s sale which topped at 319c/kg and $1259 per head.

The opening pen of the sale offered by Leon Wheeler made the top dollar per head price of $1374 and were judged as the best presented Hereford pen by Jake Taylor of JBS.

The pen of 42 Yarram Park and Mawarra blood steers were EU accredited and averaged 428kg, selling for 321c/kg to Princess Royal Station.

Hereford steers sold for a top cents per kilo rate of $3.30 which was paid twice by Paul Mason of Wellington, NSW.

The first lot to make the $3.30 rate was a pen of 56 EU accredited, Yarram Park and Mawarra blood steers which averaged 387kg and were offered by Leon Wheeler.

The second $3.30 pen were offered by Bruce and Debbie Miller of Rowan Partnership; the pen of 50 EU accredited, Yarram Park and Injemira blood steers averaged 329kg.

Mr Mason is a repeat buyer at the Hamilton sales where he purchases steers to grass fatten and sell to JBS at Scone at a 345kg dressed weight.

Quality cattle with good genetics are the number one priority according to Mr Mason.

Mr Mason purchased 226 head at the sale on Wednesday and 133 head on Tuesday, paying an average price of $1182 over the two days.

“The cents per kilo rate was a bit dearer than last year, I paid 17c/kg or $65 per head more than last year on cattle averaging 360kg,” Mr Mason said.

Crossbred steers made a top dollar per head rate of $1346 which was paid for a pen of 16 EU accredited Hereford/Shorthorn/Simmental steers offered by MJ and SM Robertson of The Highlands, which averaged 418kg and sold for 322c/kg to Princess Royal Station.

The Highlands cattle also made the top cents per kilo rate of $3.23 on a second pen of steers of the same breeding which averaged 367kg and also sold to Princess Royal Station.

Luke Bavistock of Princess Royal purchased 225 head at the sale to be lot fed in Burra, South Australia.

“I was looking for anything well-bred with the weight in it, around 400kg and EU accredited.

“I paid between 310 and 320c/kg so it’s not too bad, it was a little bit dearer today but there was a bit of competition,” Mr Bavistock said.

The quality of the cattle was once again commended by buyers and agents who agreed that despite a difficult start to the season vendors had presented their cattle well.

“All the vendors presented their cattle in exceptional condition I thought.

“We had a tough start to the season with our summer and autumn, but we’ve had a very good finish to the season through late winter into spring and back into summer, so the calves presented extremely well,” said selling agent Bernie Grant of LMB Livestock.

Marcus Winter Cooke of Murndal Partnership was happy with the prices at the sale considering the seasonal conditions in eastern Australia and fact their cattle were lighter this year than in previous years.

“We sold 140 head here averaging 312kg which over a 10-year average is a lighter weight.

“Our family has been selling here for around 50 years, I used to come here with my Dad,” Mr Winter Cooke said.

A small run of Euro and crossbred heifers sold at the end of the sale at rates which were similar to other sales in the region according to Mr Grant.

“The heifers were on par with what’s been happening at 240-260c odd, that’s about where the job’s been so you’ve got to be happy with that,” Mr Grant said.

A lot of Hereford heifers from the region had already been sold prior to the sale on live export orders to Russia and China.

“We sold the majority of our heifers over 250kg on an export order to China for $950 a head which was a very satisfactory sale,’ Mr Winter Cook said. 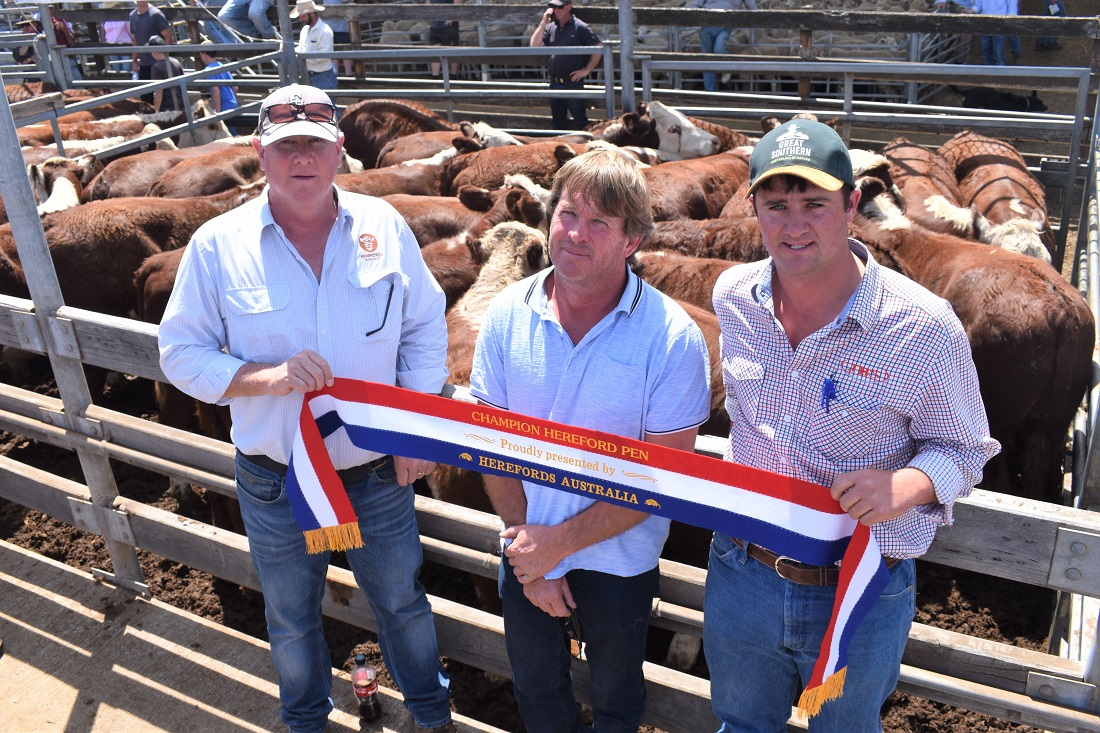 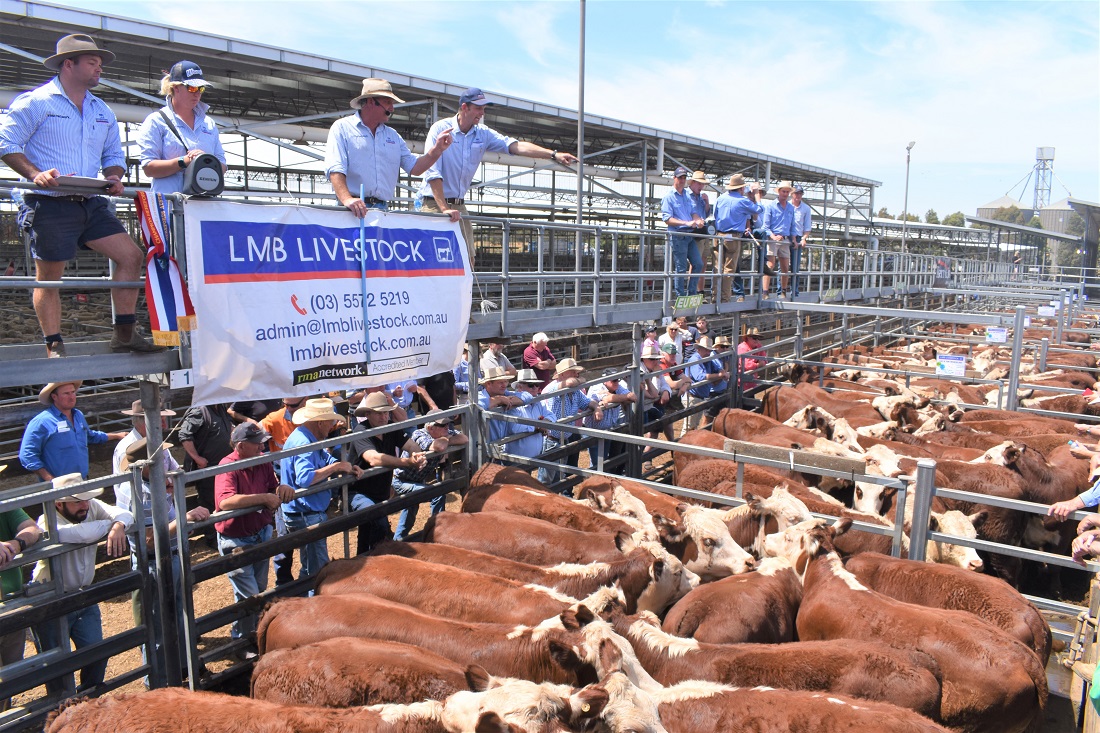 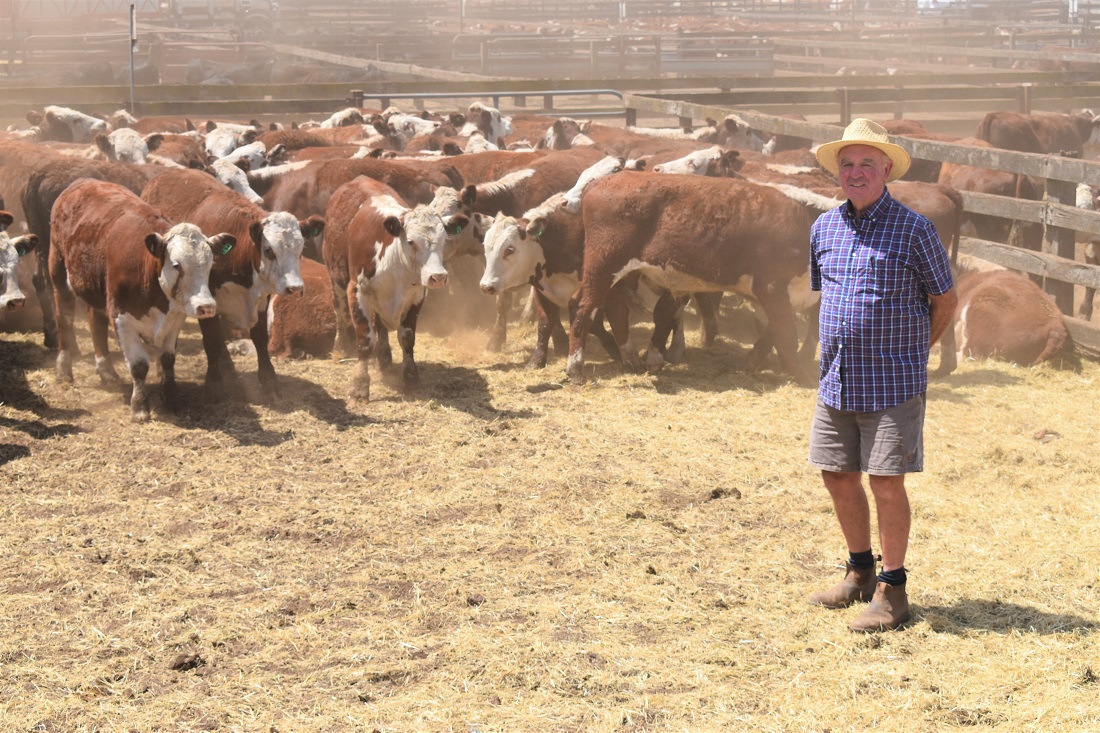 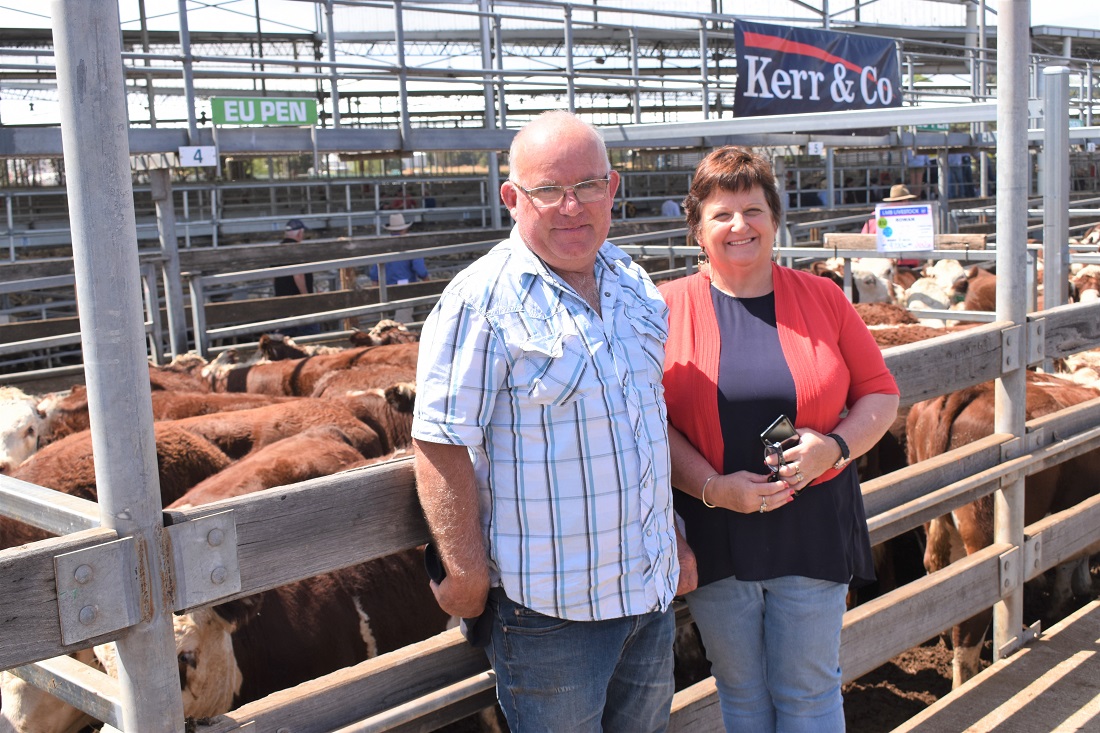 Bruce and Debbie Miller – Rowan Partnership, made the equal top cents per kilo price of $3.30 with a pen of 50 Yarram Park and Injemira blood steers. 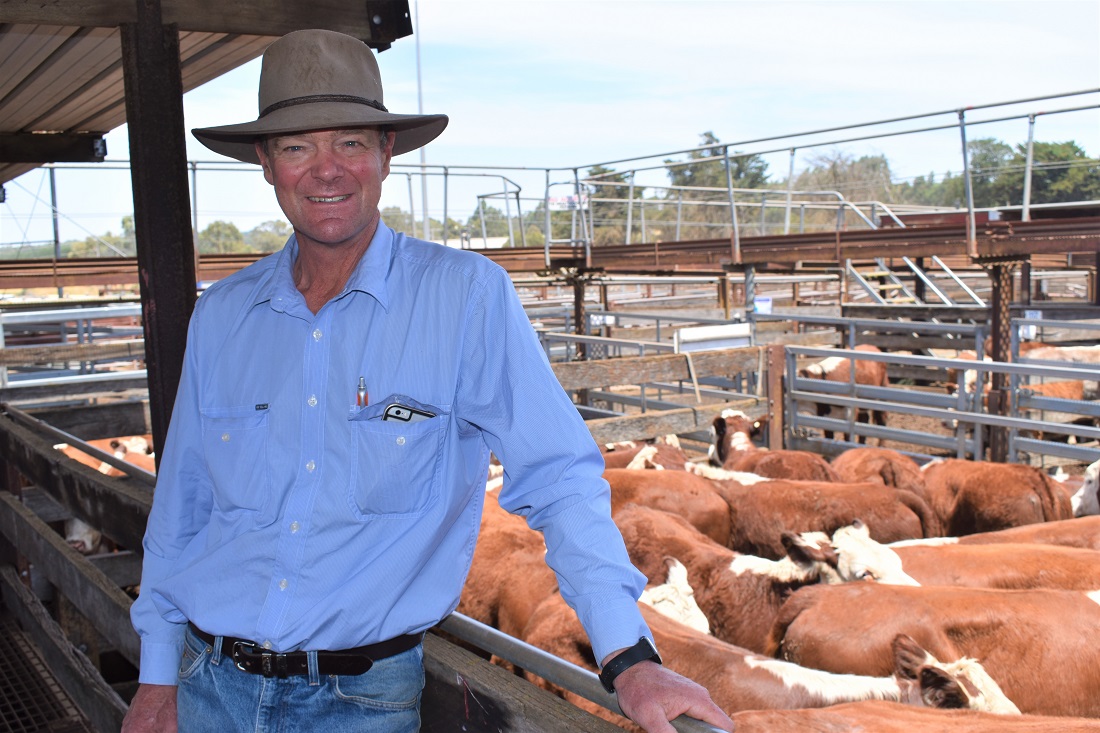 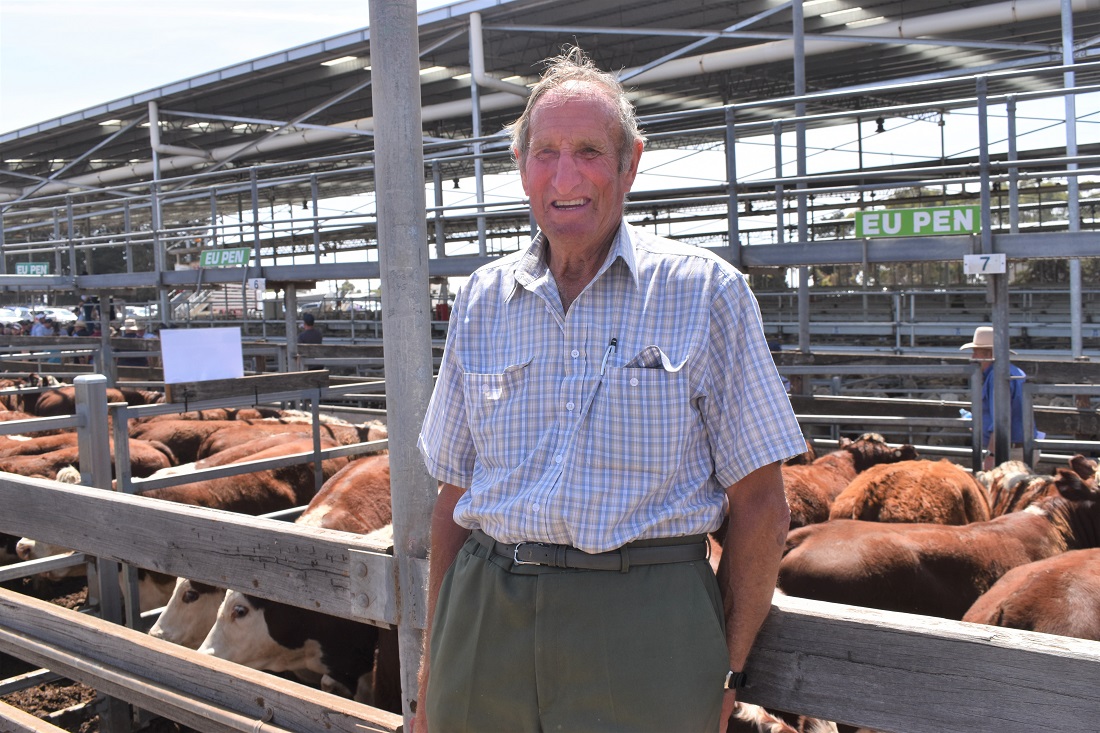 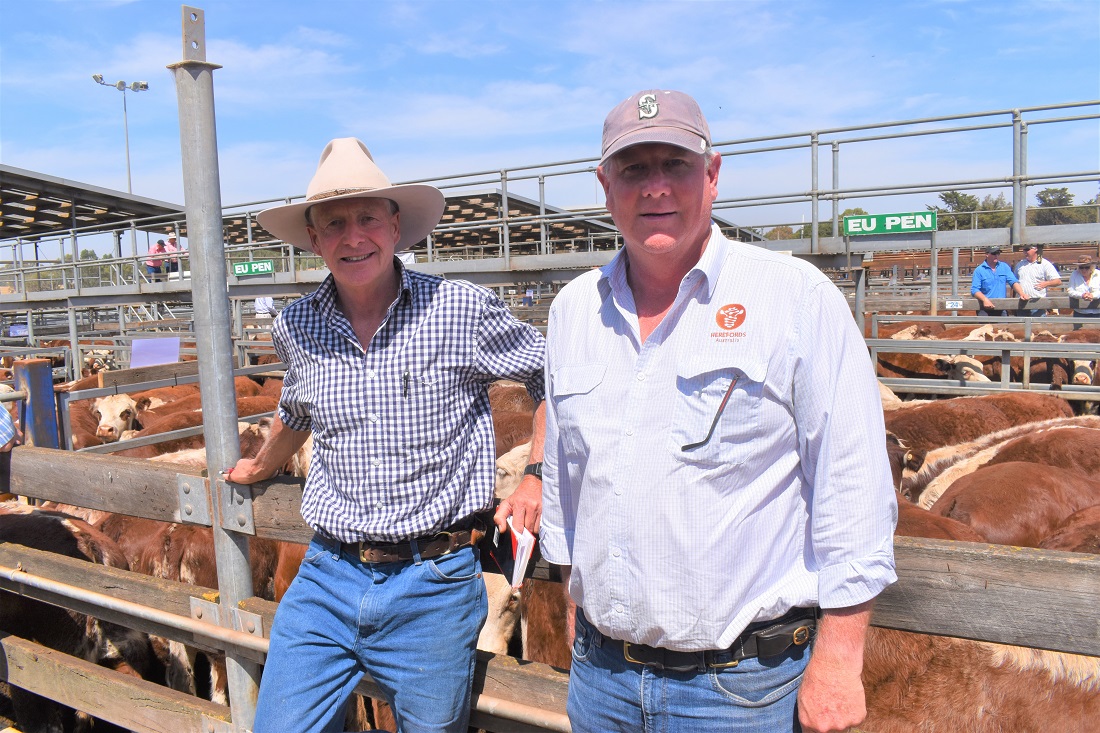 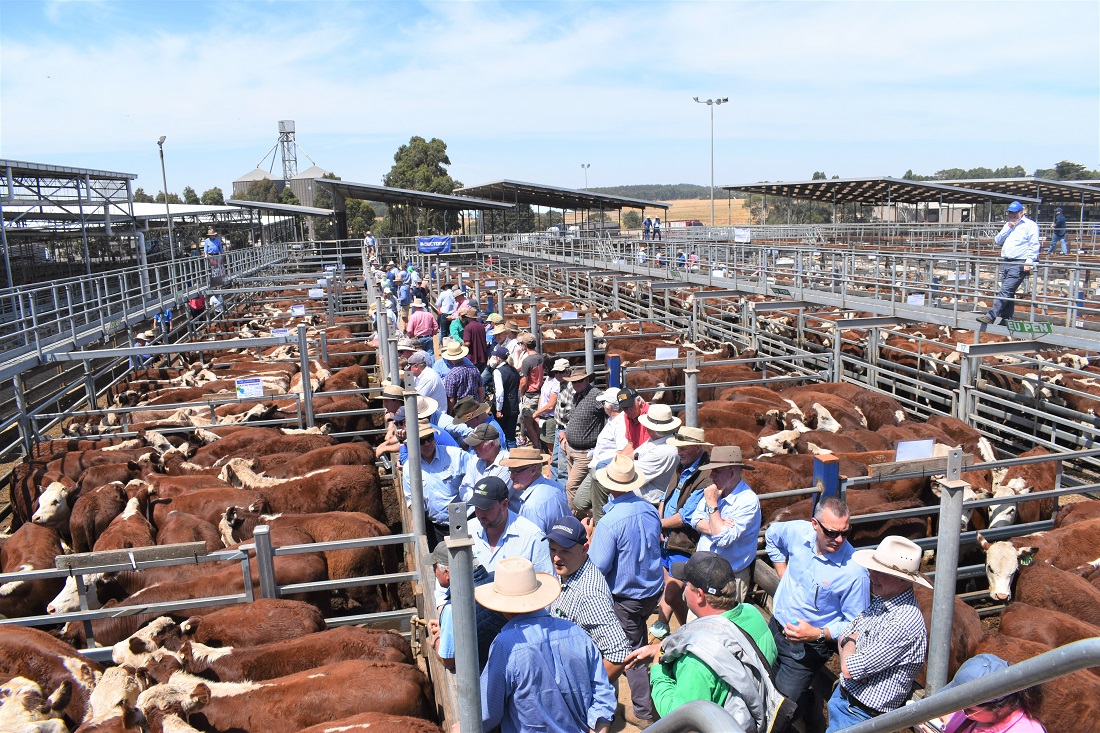 2586 head were yarded at Hamilton for the annual private agents Hereford and Euro steer weaner sale on Wednesday.