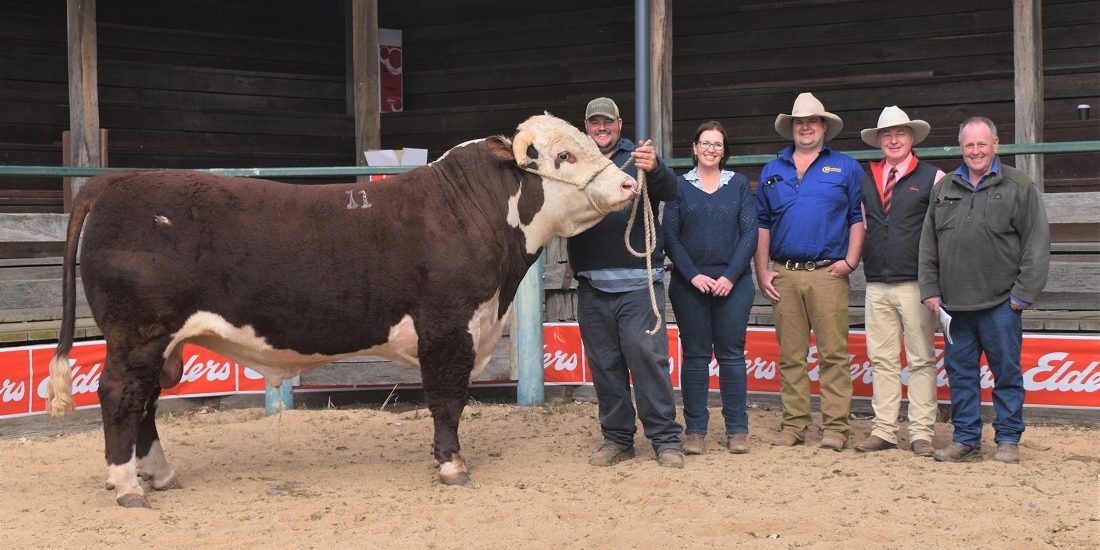 Of the 82 horned and polled Hereford bulls offered 33 sold at auction for a total sale clearance of 40%.

The top price of the sale was paid for the 1125kg son of Sugarloaf Kingmaker K135; Supple Naked, offered by Ben and Leanne Rumbel of Supple Whiteface, Guyra.

Supple Naked scanned with the highest raw EMA of the catalogue at 140sqcm, with rib and rump fats of 12mm and 18mm respectively, and a scrotal circumference of 40cm.

His great capacity and EMA earned him the first-place ribbon in the senior bull class from show judge; Ben Davies on Thursday afternoon.

According to Mr Commins, Naked ticked all the boxes regarding the traits he was looking for.

“He’s a good, thick bull. He’s long, high and deep, with good colour and he’s from Ben so I knew he’d be a sound bull.

“This is my fifth (Supple bull) in a row,” Mr Commins said.

Mr Commins has been attending the Glen Innes Hereford Bull Sale for 30 years.

Another Kingmaker son; Supple Nebular had the second highest EMA scan of the catalogue at 139sqcm and sold to the Weller family of Wellray Herefords, Nabiac, NSW.

Ben Rumbel of Supple Whiteface said he was very happy with the carcase attributes and weight for age of both Naked and Nebular and had purchased their sire Sugarloaf Kingmaker for those exact reasons.

The Supple stud was also named most successful exhibitor of the 2019 show and sale.

The second top price of the sale was $13,500, which was paid by Chris Lisle of Tummel Herefords, Walcha for 26-month-old Kylandee Narrabri, offered by Phil and Brad Thomas of Kylandee Herefords, Inverell.

A repeat purchaser from the Kylandee program, Mr Lisle was very impressed with the structure and style of Narrabri.

“I like his carcase, his length and style, and he’s got beautiful feet on him.

“I’m looking for IMF which he has, and EMA. Those are mostly the traits we’re after really,” Mr Lisle said.

The Kylandee stud enjoyed a very successful couple of days at Glen Innes achieving the second top price of the sale as well as securing grand champion bull and the coveted “Yardsmen’s Pick” award with 22-month-old Kylandee Nerong.

Mr Larson said he was looking for a mix of new genetics and purchased four bulls at auction as well as picking up a fifth bull immediately after the sale.

Mr Larson was impressed with the completeness and growth of the grand champion bull, describing him as a “good sort and not overdone.”

“He’s all there, ready to go out to work and his numbers look good,” Mr Larson said.

This is the third year in a row that Kylandee have taken out both the grand champion and Yardsmen’s Pick awards.

On sale day Kylandee sold five of six bulls offered for an average price of $6,700.

Brad Thomas of Kylandee said they were very happy with their results over the two days and saw the result as proof that they are doing the right thing with their cattle.

“We also chase cattle that can fit every market, from weaners through to grown bullocks.

“(We also focus on) easy doing cattle and feed efficiency, which you realise in a year like this, as well as temperament, temperament’s a massive thing,” Mr Thomas said.

The overall quality of the bulls offered on sale day was high, with the lower clearance being attributed to the ongoing drought and lack of cow numbers, resulting in a much lower demand for bulls.

Andrew Meara of Elders Glen Innes remained optimistic for the oncoming year and said it was nice to be able to sell the bulls they did and to achieve a good top price given the current tough season.

“Overall, onwards and upwards from here, hopefully by the time we roll around again for next year we’ve had a bit of a change in the season and we get a few females back in the system and it’ll be all business as usual again.

“It’s just one of those years that’s finally caught up with us,” Mr Meara said.

“The atmosphere with the vendors was fantastic, they all realised that it was going to be very tough here.

“The vendors have got an attitude that we’ve just got to pick ourselves up and keep going. Everybody else is in the same boat,” Mr Vivers said.

Mr Vivers also thanked the sale committee for the hard work they did in the lead up to the event as well as thanking the buyers that showed up and supported the sale. 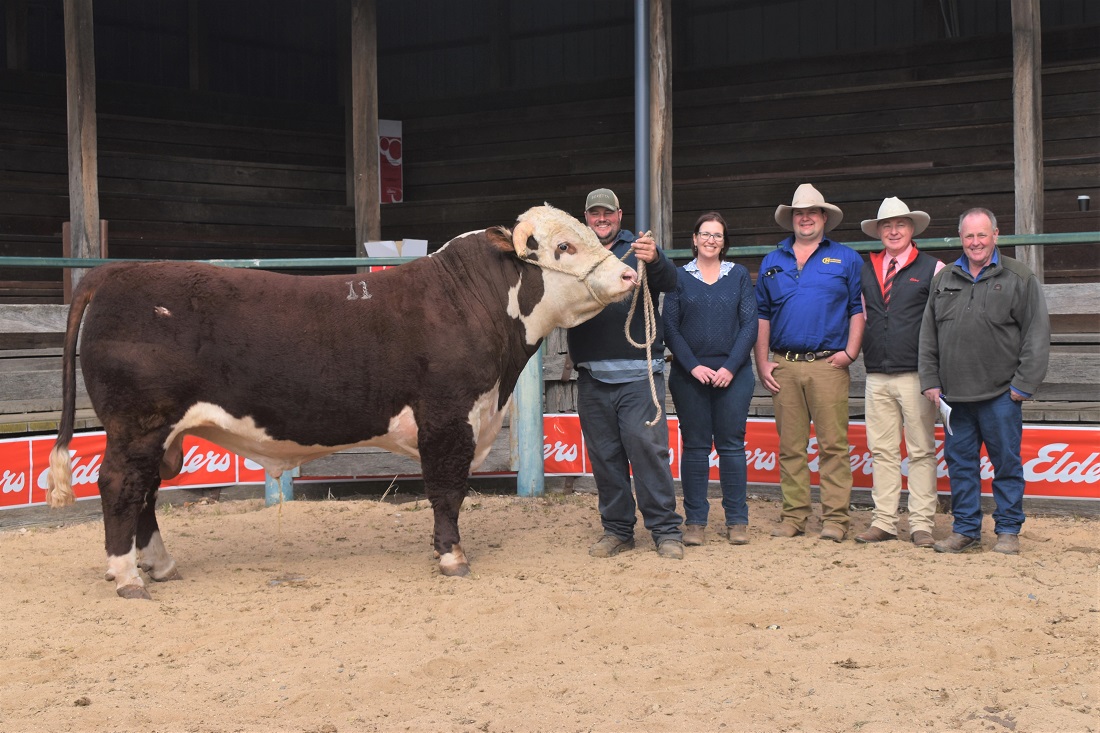 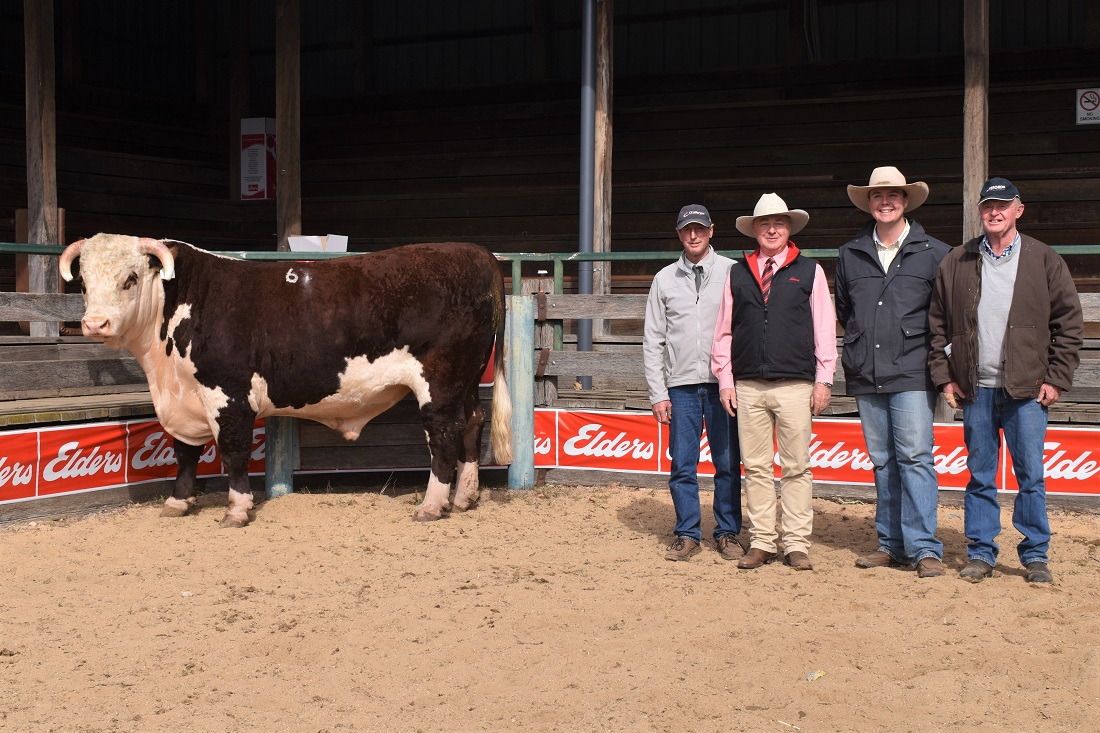 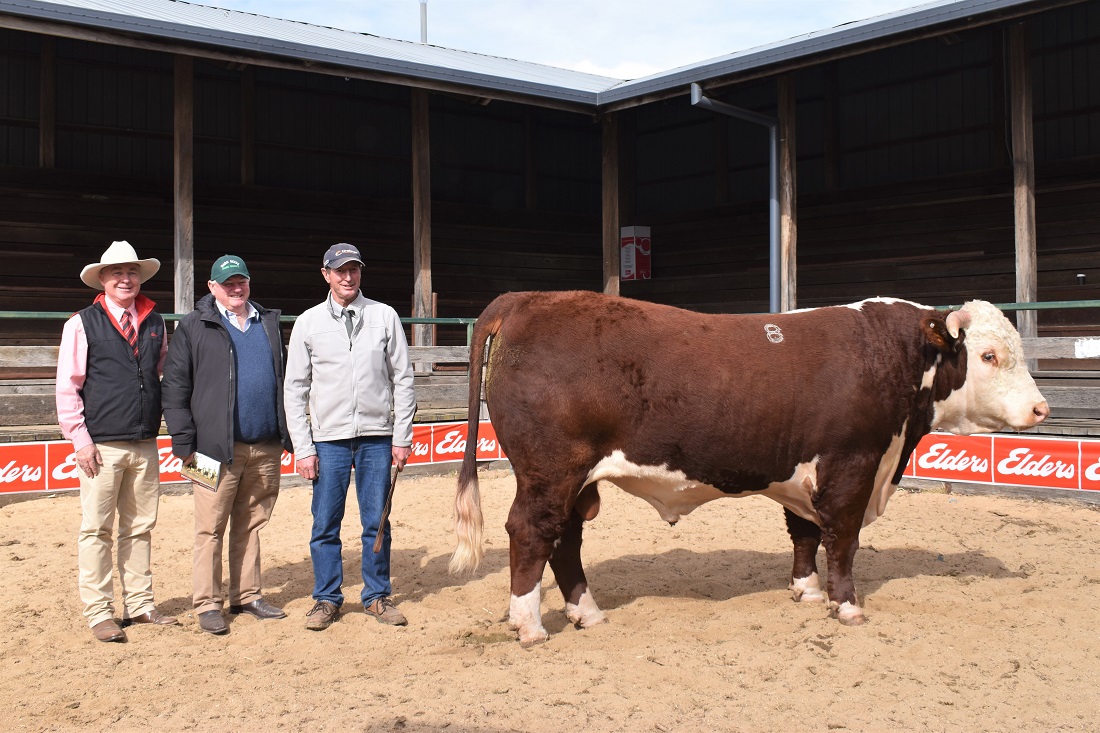 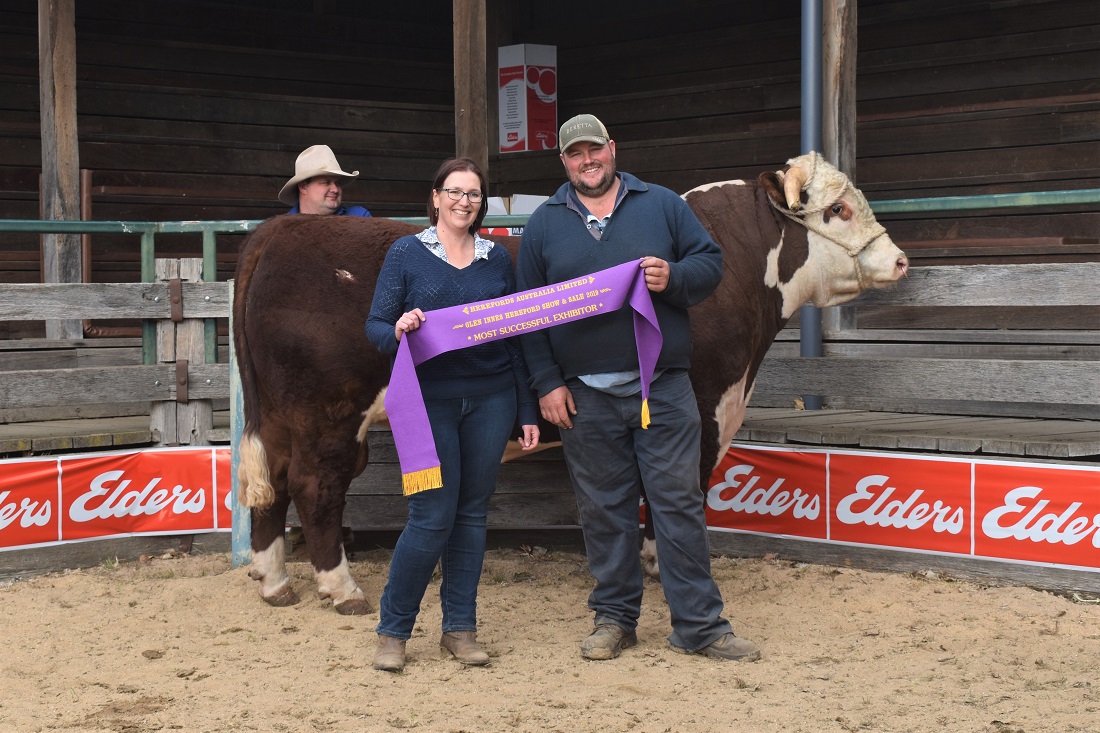 Leanne and ben Rumbel with the sash for most successful exhibitor. 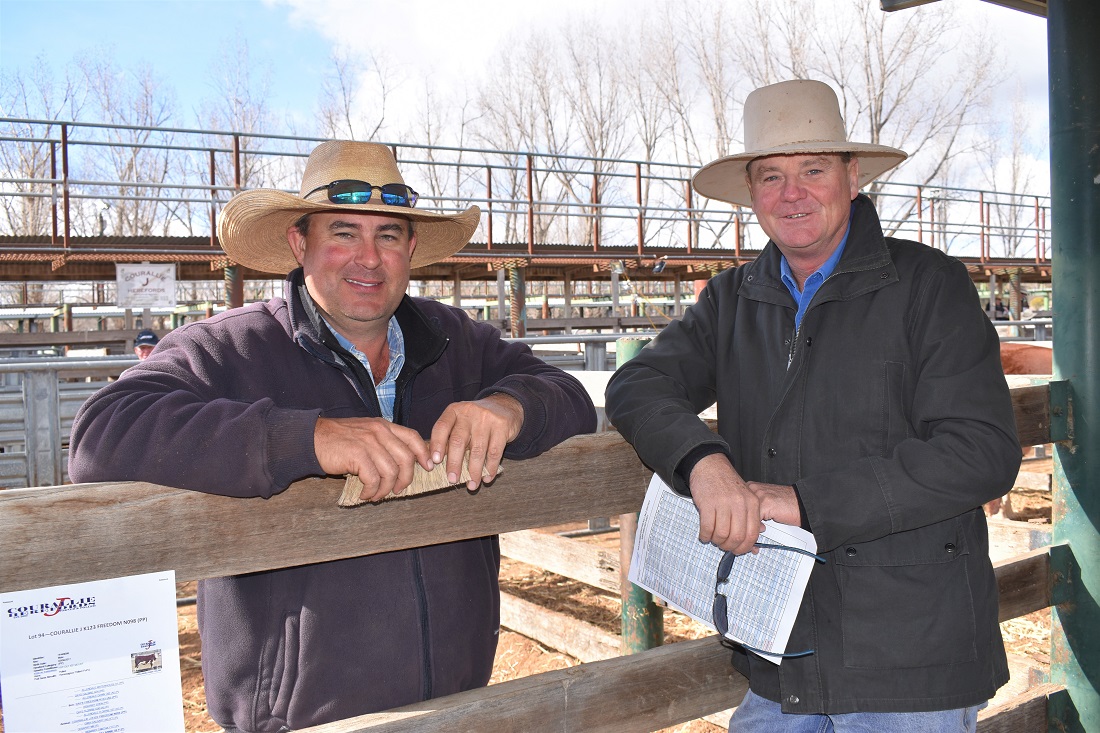 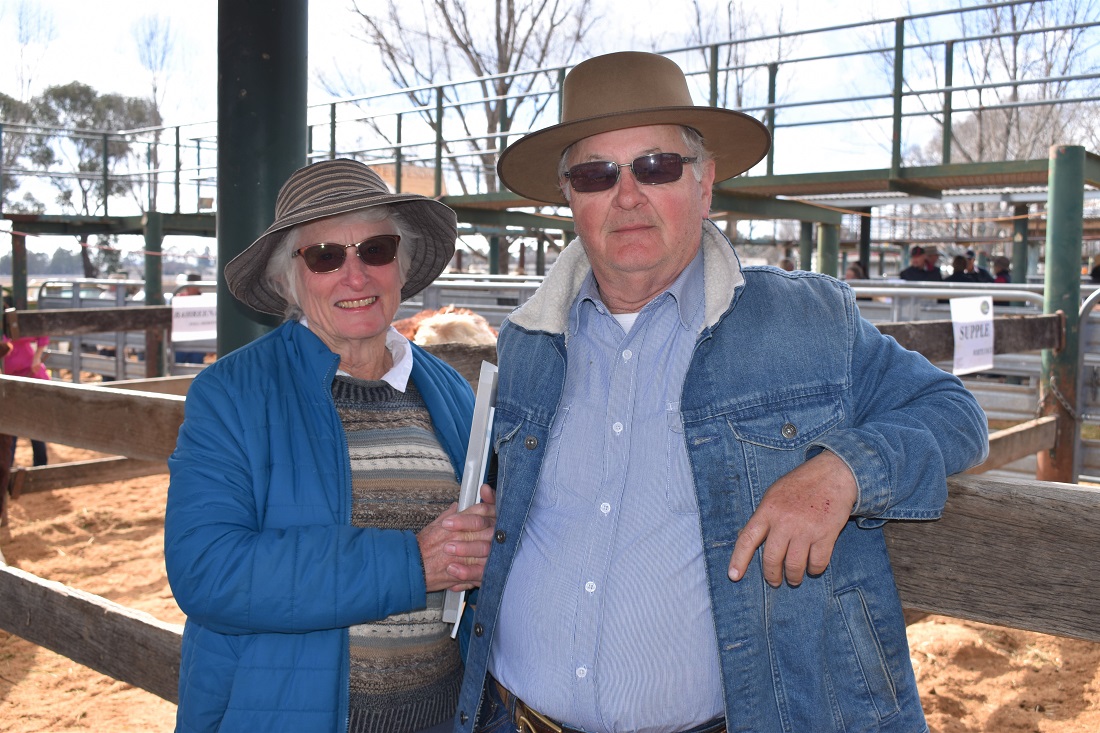 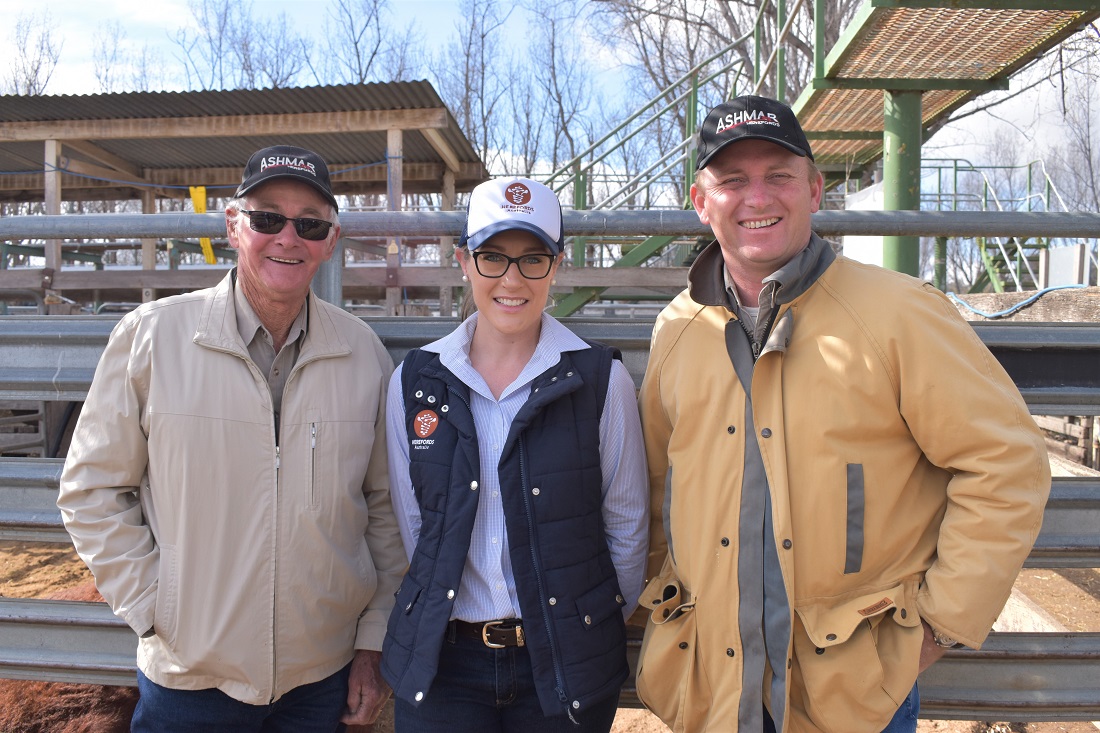 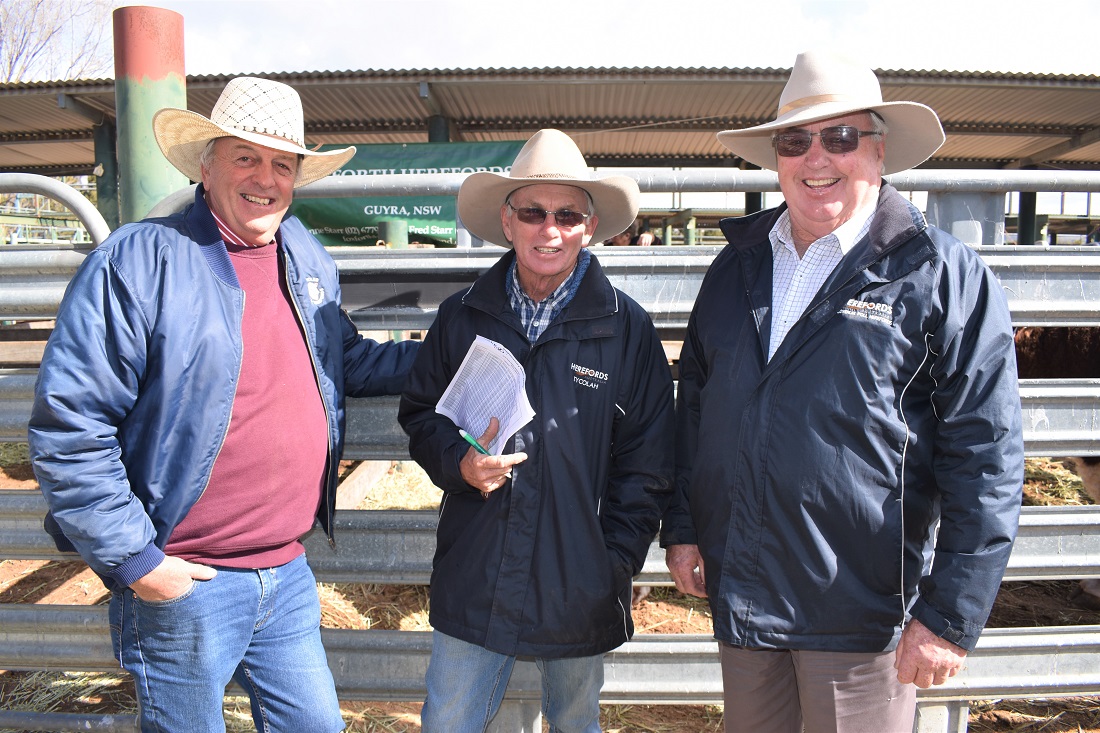 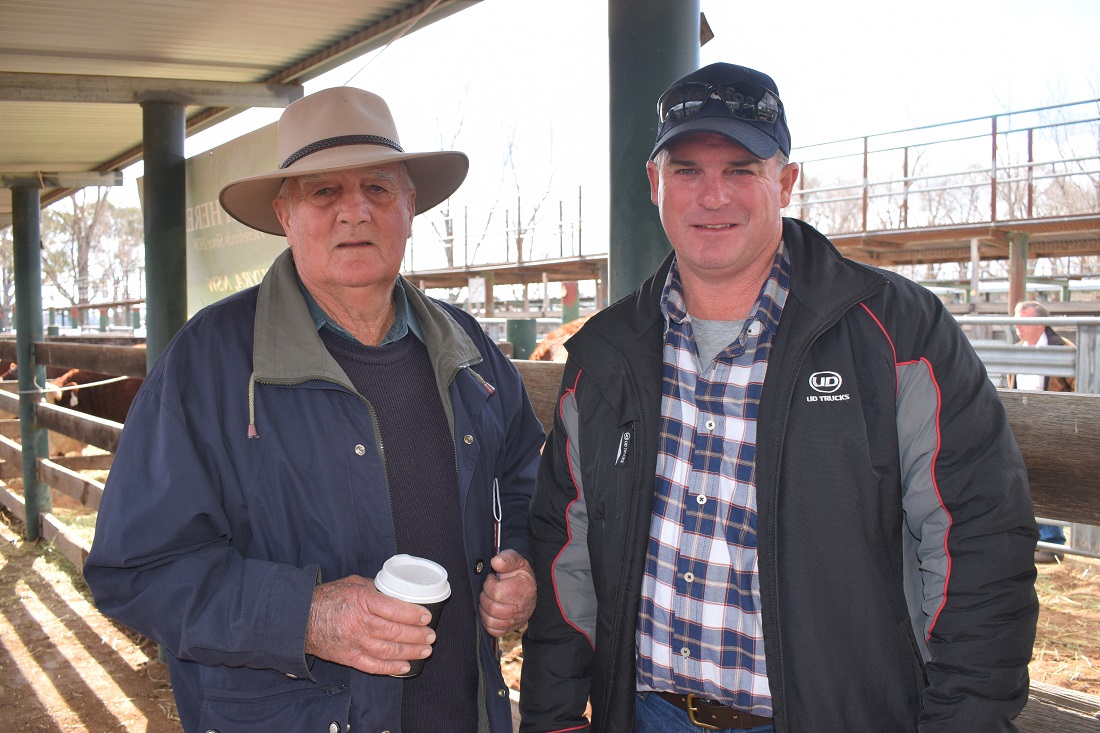