Lot feeders and repeat buyers bid up to 319c/kg and paid a top price of $1259 for Hereford steers at Hamilton on Wednesday afternoon.

A total of 2574 Hereford and Euro cross weaner steers and heifers were yarded on the day and sold as 145 lots.

The Herefords Australia champion pen of steers was awarded to Leon and Sally Wheeler of Wallacedale.

The pen was judged by Steve Chapman of JBS.

The Wheelers also earned the top dollar per head price of $1259 with a pen of 21 EU steers of the same breeding.

The steers weighed an average 434kg and made 290c/kg, selling to J&F Australia.

Leon Wheeler said that he and his wife Sally have been selling weaners at Hamilton for 12 years and that this year’s sale was “really good.”

“Our steers only made $30 or 7c/kg less than last year and our average weight was down 10kg. We averaged 299c/kg this year.” Mr Wheeler said.

The second top dollar per head price was $1257, paid for a pen of 19 EU steers of Yarram Park and Glendan Park blood offered by the Pepper Partnership.

DW & MJ Elsom made the top c/kg price in the Hereford steers, selling a pen of 33 Injemira and Ennerdale blood EU steers for 319c/kg to Marc Greening of Injemira.

Crossbred steers sold for a top price of $1274, which was paid for a pen of 19 Hereford/Shorthorn/Simmental cross steers weighing 411kg and offered by MJ & SM Robertson.

Mr Purtzel commended the quality of the cattle presented at the sale and was pleased with the number of EU accredited cattle offered.

“There was an outstanding run of Hereford calves, particularly the front end. You’d go a long way to see a better run of cattle.

“There was quite a good yarding of EU accredited Herefords, most of the bigger runs of Hereford cattle are EU accredited which is great because it gives the buyers a bit more flexibility.” Mr Purtzel said.

Repeat buyer and professional bullock fattener Paul Mason of Wellington NSW was present at the Hamilton sale again on Wednesday, having already picked up a number of steers at the Tuesday afternoon Hamilton sale.

Mr Mason purchases Hereford steers at the Western Districts sales to take home and fatten on grass for the JBS grass fed market. 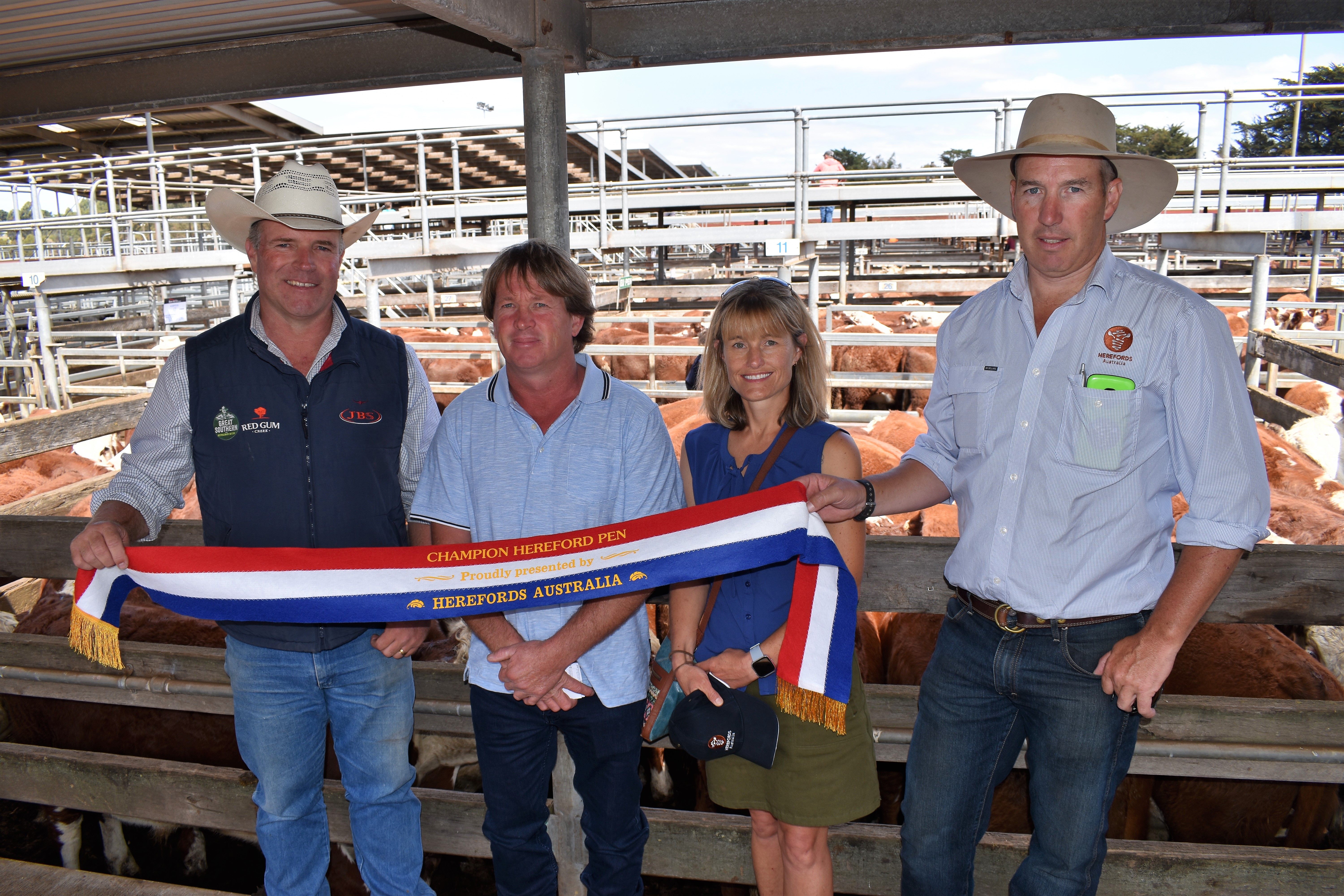 Leon and Sally Wheeler were presented with the champion sash for best presented pen of Hereford steers. The Wheelers also made the top dollar per head price with a pen of Yarram Park and Mawarra blood, 434kg steers, selling for $1259. L to R: Steve Chapman – JBS, Leon and Sally Wheeler and Andrew Donoghue – Herefords Australia General Manager. 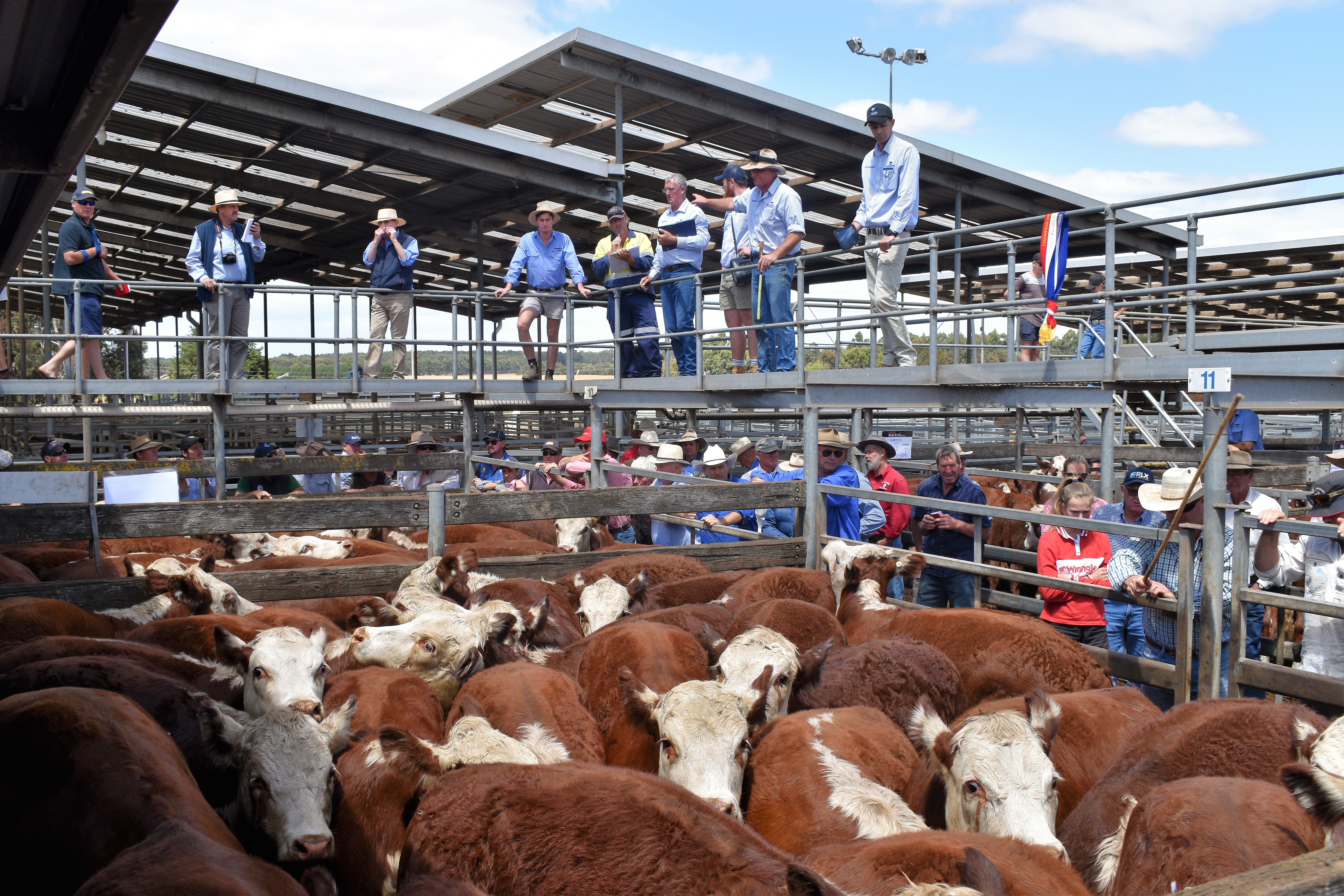 Bidding gets underway on the Wheeler’s pen of champion steers. The steers sold for 302c/kg ($1126) to Elders Dubbo.

Paul Mason of Wellington NSW purchased 306 steers at Hamilton on Wednesday. The steers will be grass fattened and sold to grass fed markets. 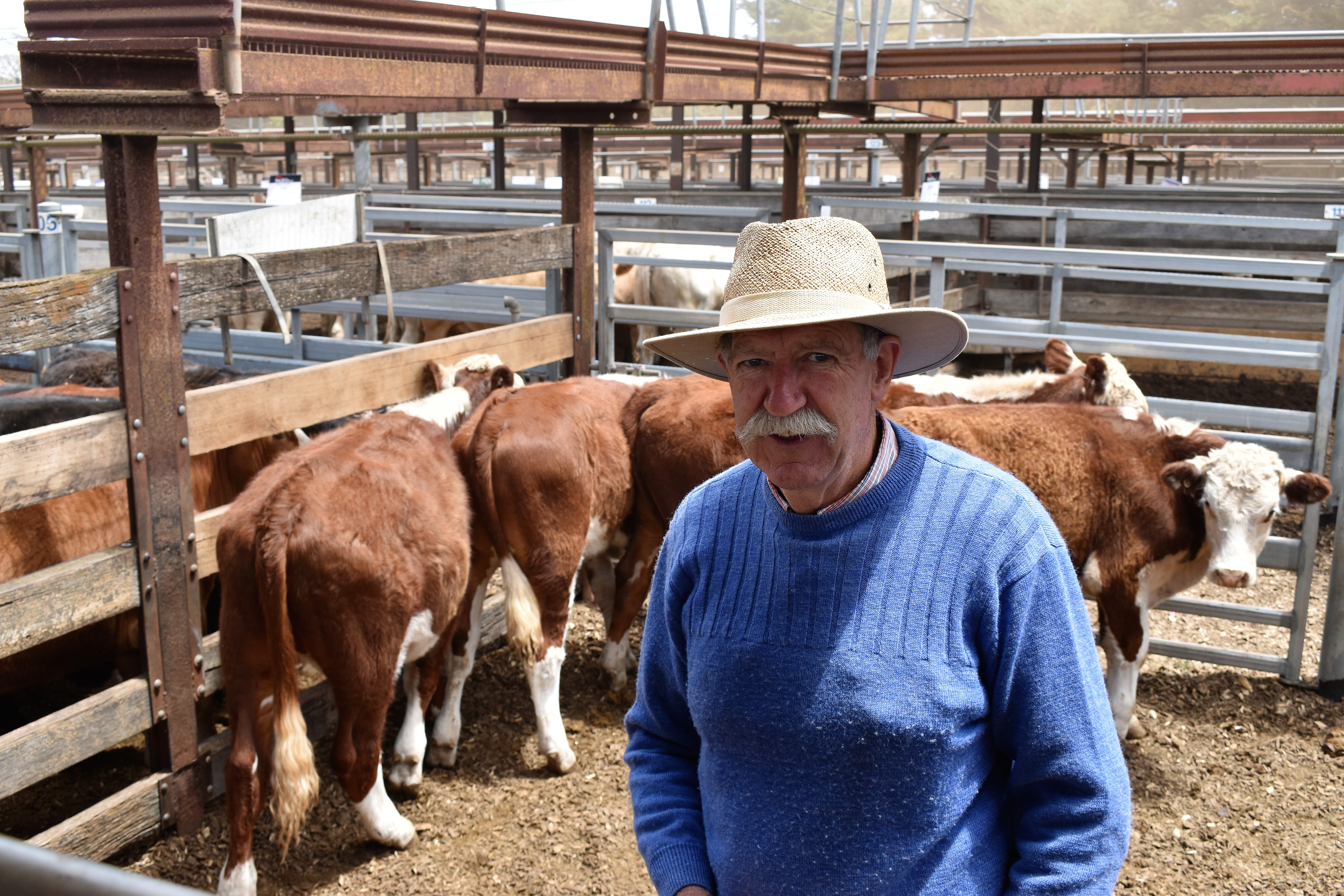 Michael Blake of Bally Glunin Park sold this pen of eight month old, Cannawigra blood steers for $824. Bally Glunin Park have been practicing “Low Stress Stock Handling”  for about 15 years on their sheep and cattle property in Hamilton. 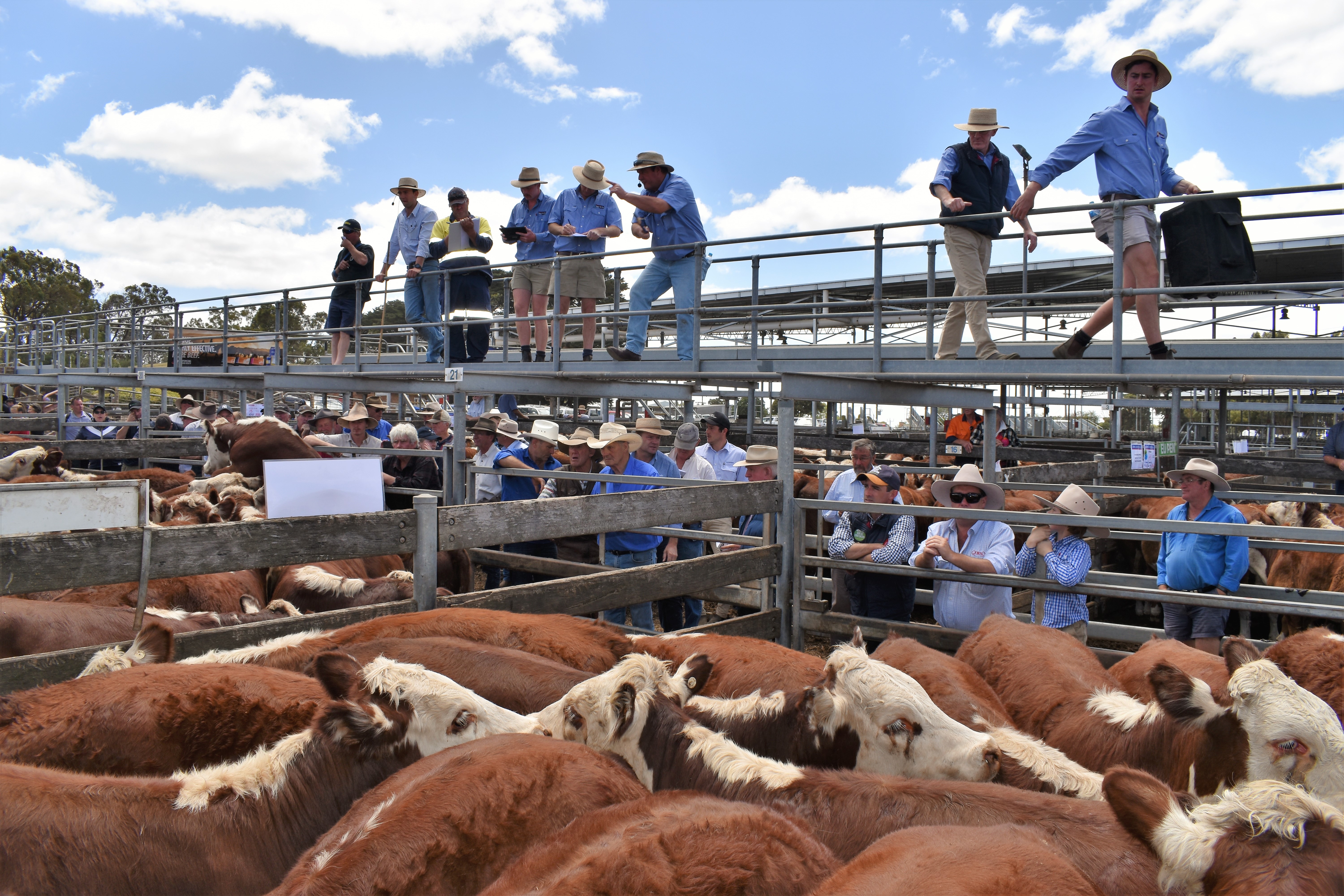 Hereford steers sold to a top price of $1259 with a top c/kg rate of $3.11 at Hamilton on Wednesday afternoon.