The run of whiteface weaner sales finished the week at Wodonga on Friday with autumn 2018-drop steers ringing the bell at $1150 and heavy heifers making $1135.

All categories across the board softened on the previous day’s sale at Wodonga, with the exception of heavy grown steers and heifers supported by a Russian export order and Tasmanian buyers.

“The steers are well weaned enabling them to progress from the day you buy them,’’ he said.

Mr McCormack said an ordinary season had resulted in the calves yard weaned in December onto hay and pellets, followed by hay and silage in the paddock, giving a 10kg weight advantage on last year.

Topping the purebred steer weaners on a cents per kilogram basis was John and Jane Witherow, Murmungee, Vic, with a pen of 22 eight to 10-month-old steers weighing 320kg.

The couple offered 48 steers and 17 heifers, exceeding their expectations of an average of 300c/kg or $875.

“The cattle were weaned a month earlier than usual as we had received 440mm up until December 13 when 176mm fell in one day, including 167mm in four hours,’’ Mr Witherow said.

“The calves were then weaned onto silage as the paddock feed was destroyed.’’

Opening the weaner run was a pen of Wirruna and Yavenvale blood steers, 388kg, offered by Mike and Shirley Trewin, Bungil, and selling to Rodwells Wodonga for $1090 or 280c/kg.

Adrian Murtagh, Mudgegonga, Vic, topped the grown and yearling steer offering with Injemira blood cattle, 14 to 16 months, and 495kg, selling for $1360 or 274c/kg.

Mr Murtagh, who was among Hereford vendors to sell steers to a Russian export order, offered AI bred steers by Injemira and Yavenvale sires.

“I had a 72 per cent conception rate on the cows the first time AI was used – I wanted to improve the genetics and have retained the heifers,’’ he said.

Ged and Shelley Comerford, Mansfield, topped the black baldy yarding on a cents per kilogram basis with a pen of 30 Morganvale and Allendale blood steers, weighing 303kg and making 334c/kg or $1015.

Bruce Campbell, Koetong, topped the black baldy weaners on a dollars per head with a draft of 68 weighing 347kg selling for $1075 or 309c/kg.

Bruce Holland, Roberts Ltd, Launceston, sourced over 500 Hereford and black baldy steers and heifers for backgrounding by farmers on the north west coast of Tasmania, at Thursday’s Wodonga sale.

“The prices are a little under (Tasmanian) prices and the heifers are quite buyable – we averaged 249c/kg, plus another 20c/kg landed,’’ Mr Holland said.

“The line up of cattle here has been outstanding for the big yardings.’’

Among those vendors in the “front paddock’’ run was David Trethowan, Cookardinia, with Concordia blood steers, 305kg, and making $925 or 303c/kg.

Mr Trethowan sold his draft of 70 steers for over 300c/kg and considered the sale as solid.

“We have had a tough season and the weights were down 40kg on last year,’’ he said.

Shai and Simone Feuerherdt, Walla Walla, were pleased with their prices considering the seasonal conditions.

Trevor Ralston, “Hollywood”, Euroa, sold a line of 47 Morganvale blood steer weaners, and was happy to achieve close to $1000.

“Anything with condition sold reasonably well but anything a bit off was down quite a bit,’’ Mr Ralston said.

“These calves were weaned early in September as we had no autumn break, winter growth or spring, and I needed to maintain the cows’ condition.

Rodwells Wodonga auctioneer Murray Bullen said most steer weights were 30-40kg down on last year but the majority of cattle were well weaned.

“The sale started off slow on the heavy steers but gained momentum once it got into those 400kg cattle,’’ Mr Bullen said.

“Our local commission buyers were strong today with orders to Russia, along with steer finishers from the Alexandra area.

“The middle run of Hereford and black baldy steers were 280-320c/kg – these have got to be some of the best in the country.’’

Mr Bullen said numbers were down due to early turn offs in the dry conditions.

“Those producers who have hung on were well rewarded,’’ he said.

“There were lot feeders today chasing those front paddock heavier cattle but the lighter end was back on yesterday’s sale.

“Tasmania has had a cracking season and Roberts Ltd have supported the sale well.’’ 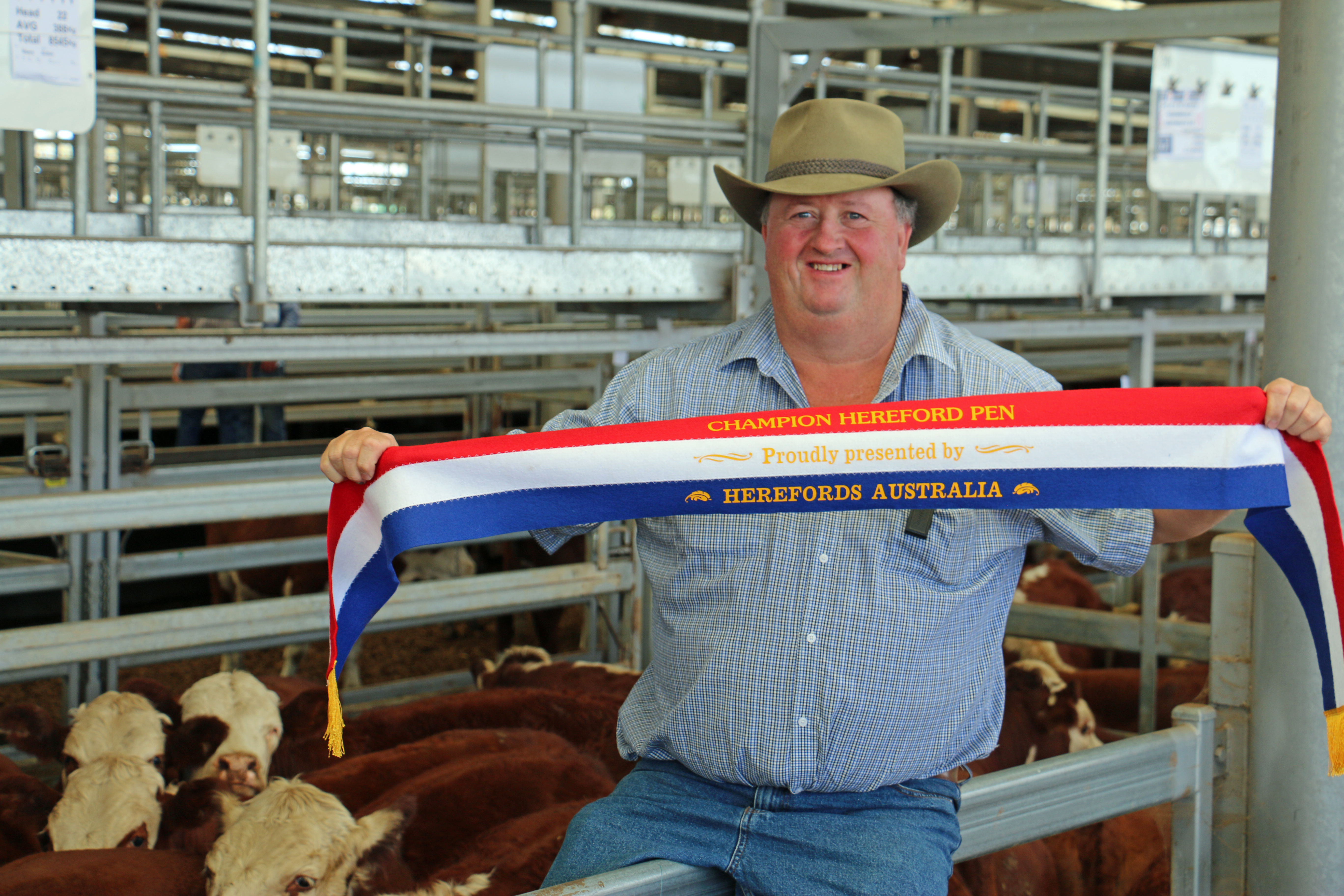 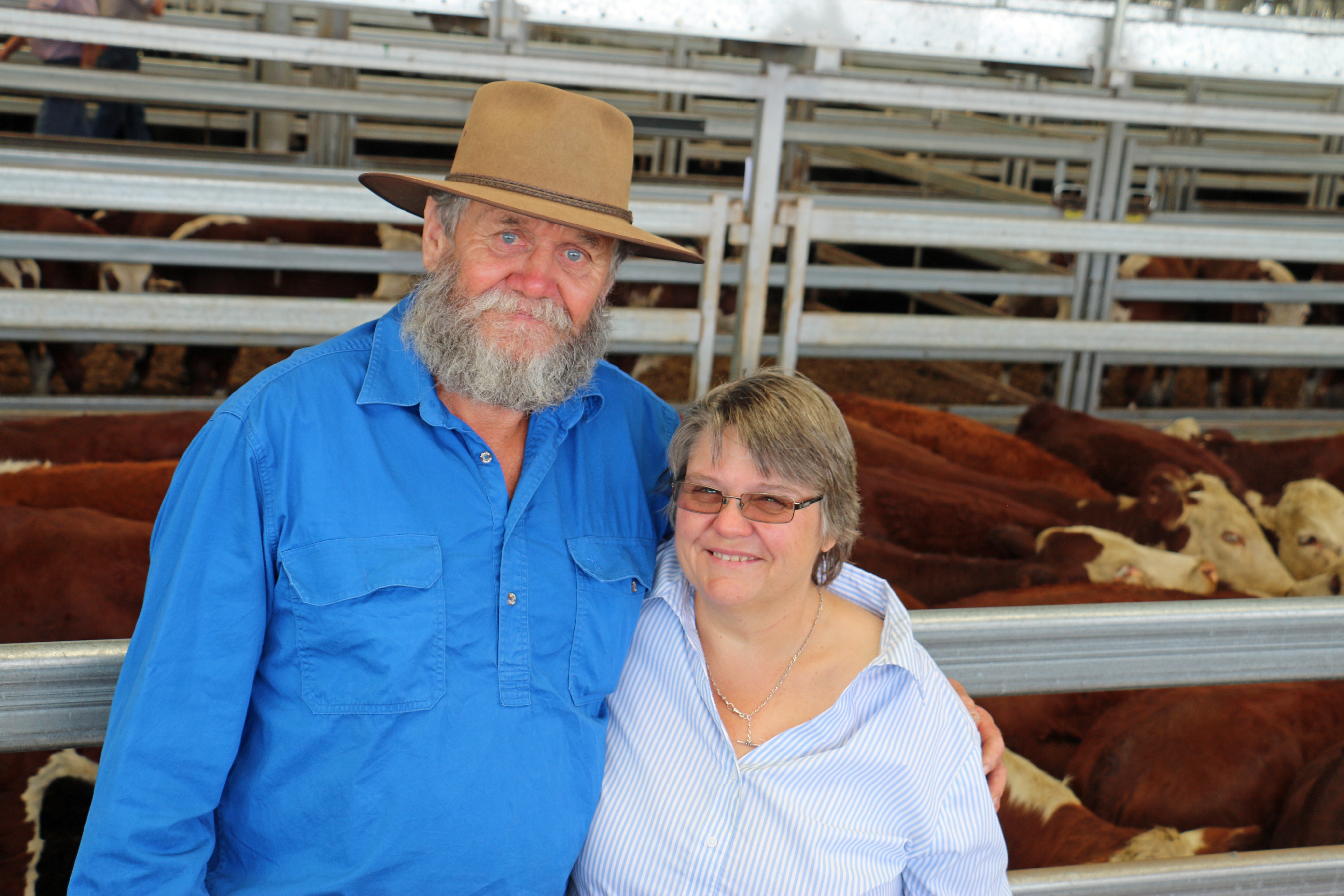 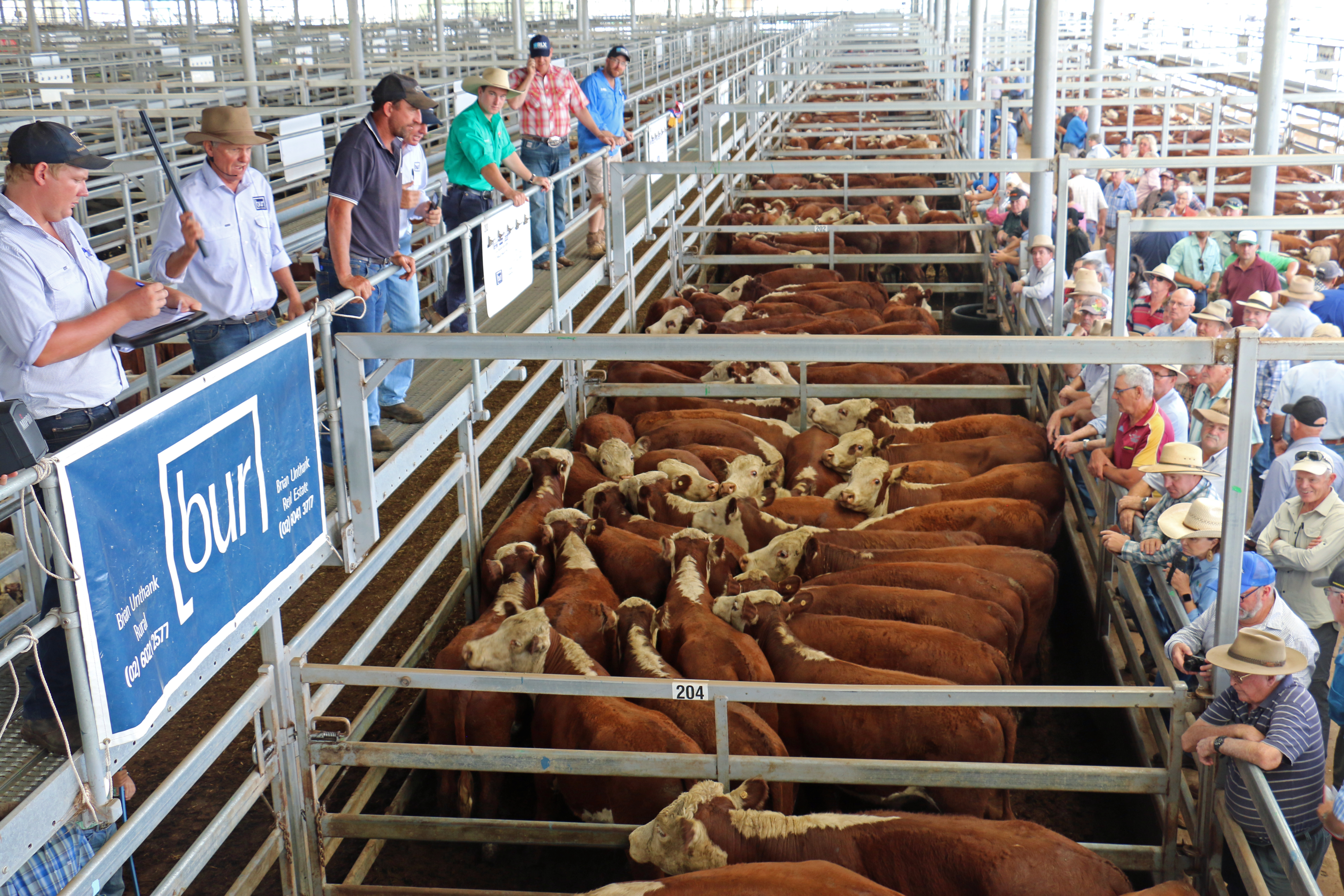 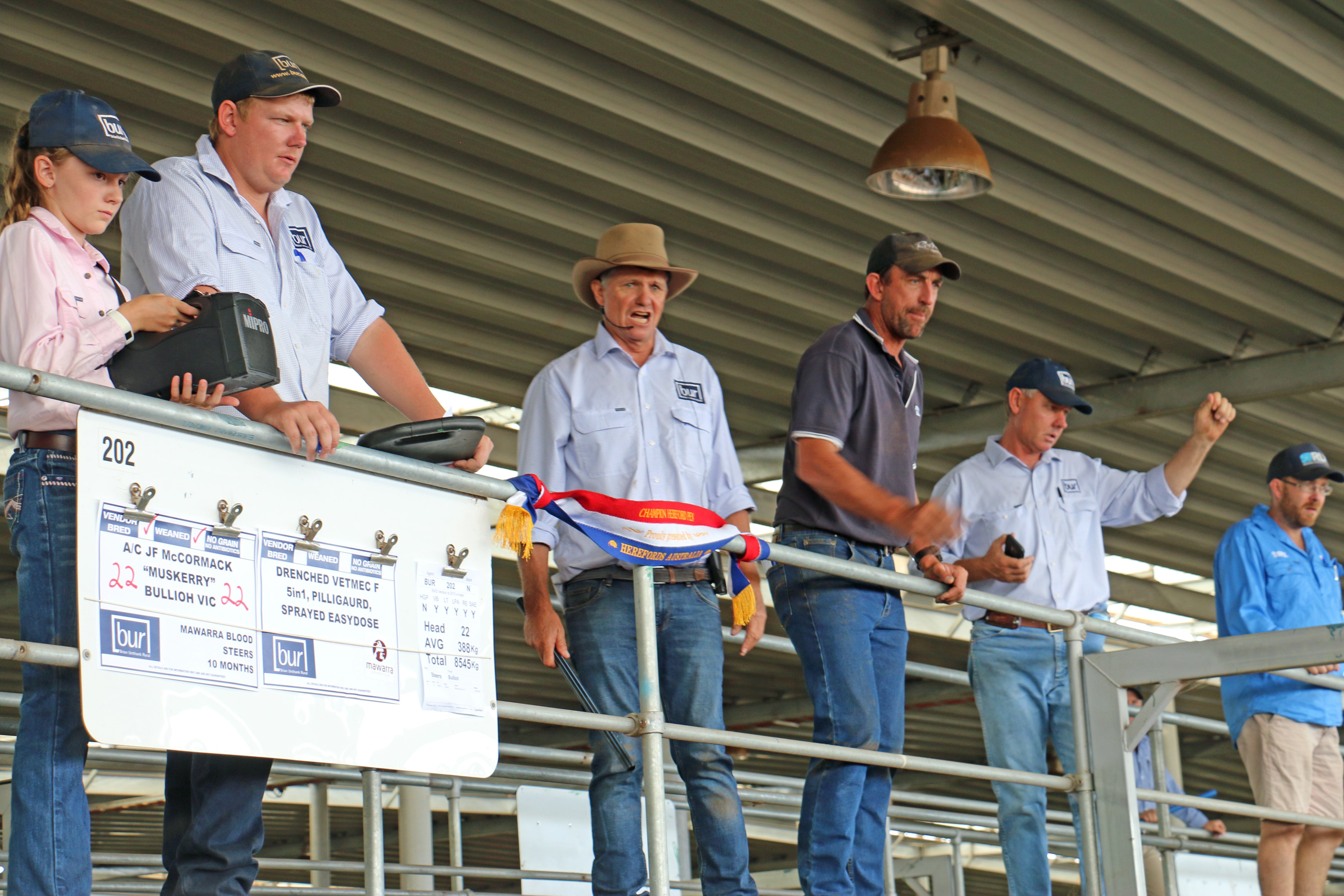 The Brian Unthank Rural team sells the Herefords Australia champion pen at Wodonga on behalf of the McCormack family, Bullioh. 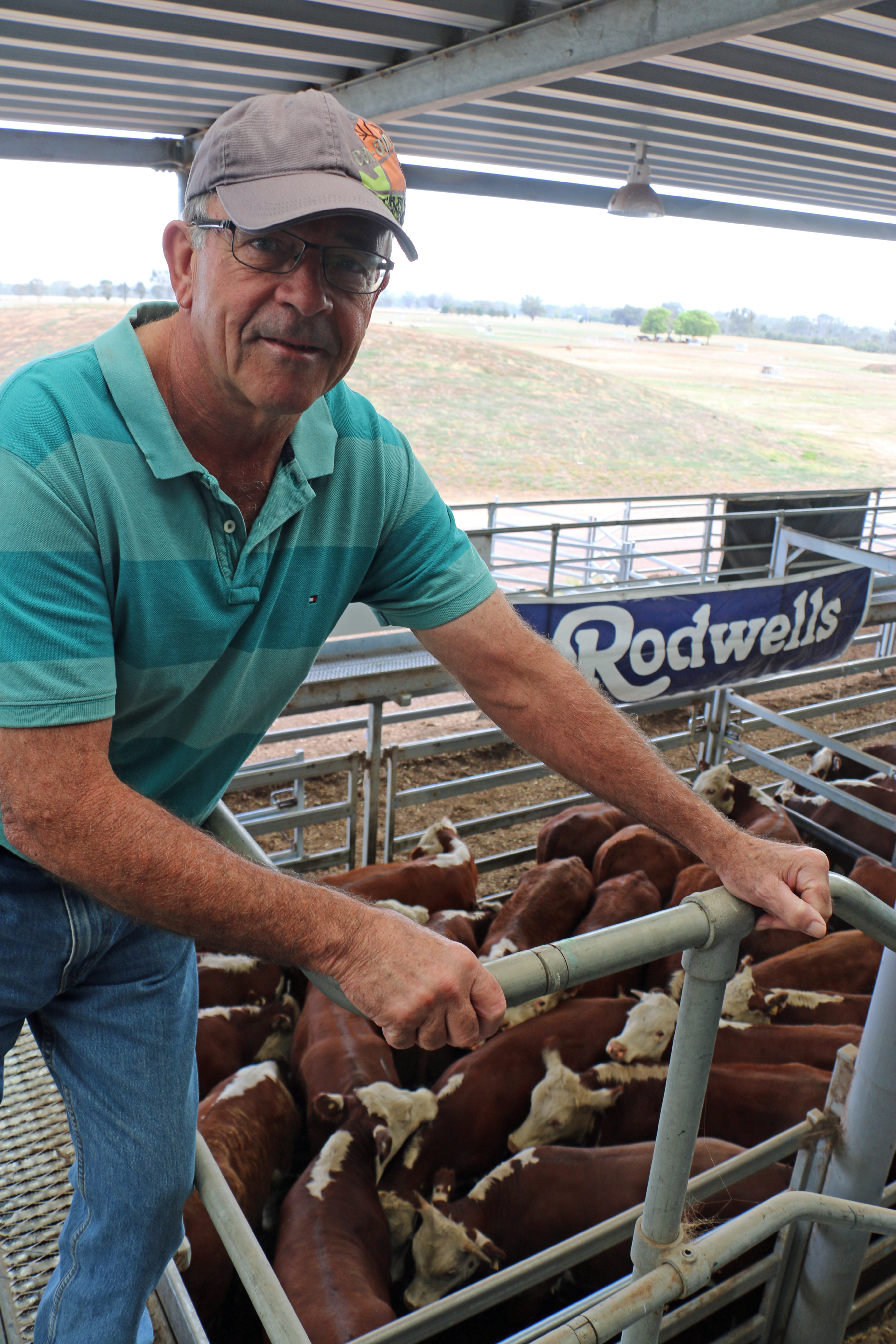 Mike Trewin, Bungil, sold the opening pen of weaners, Wirruna and Yavenvale blood, 388kg, for $1090 or 280c/kg to Rodwells Wodonga. 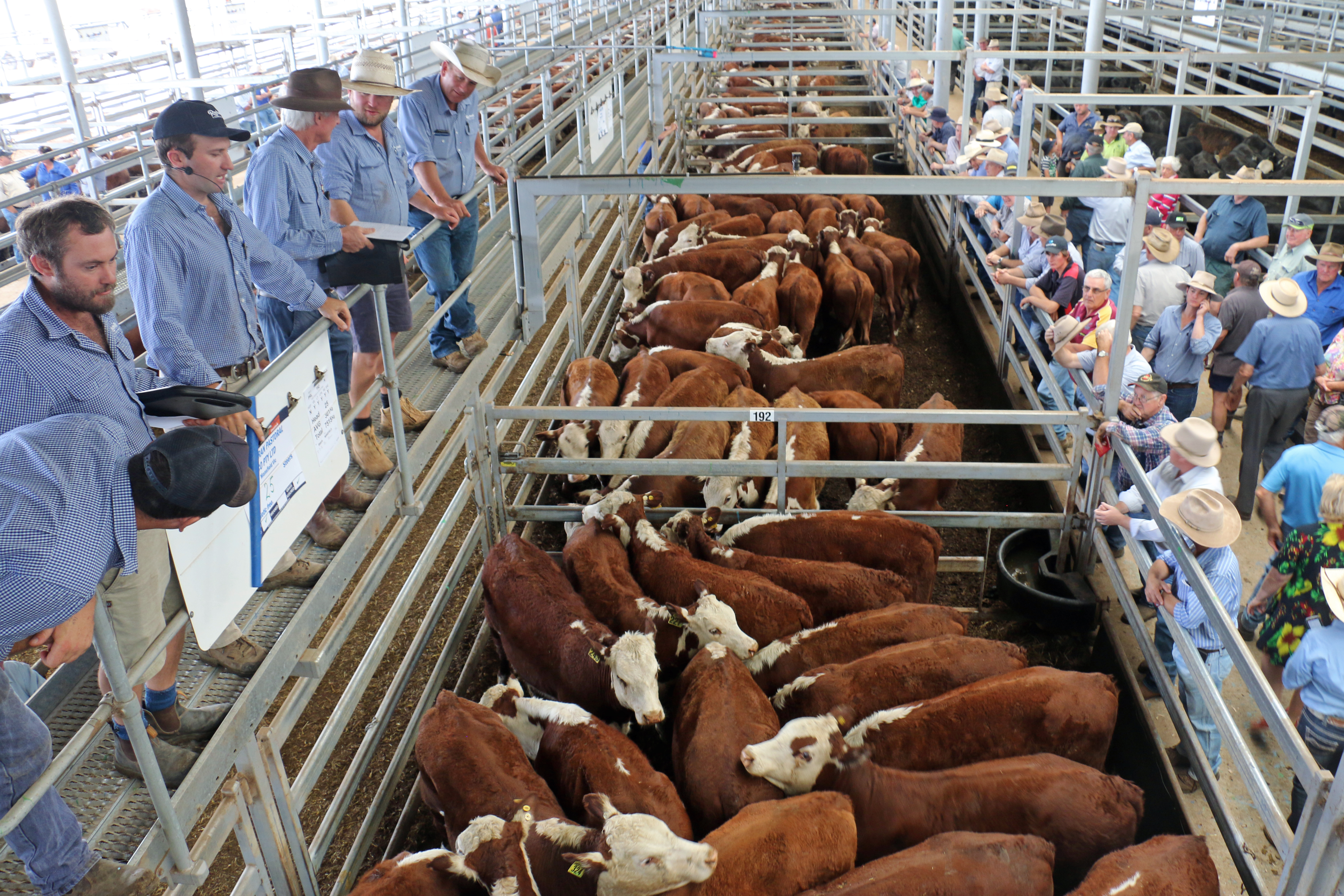 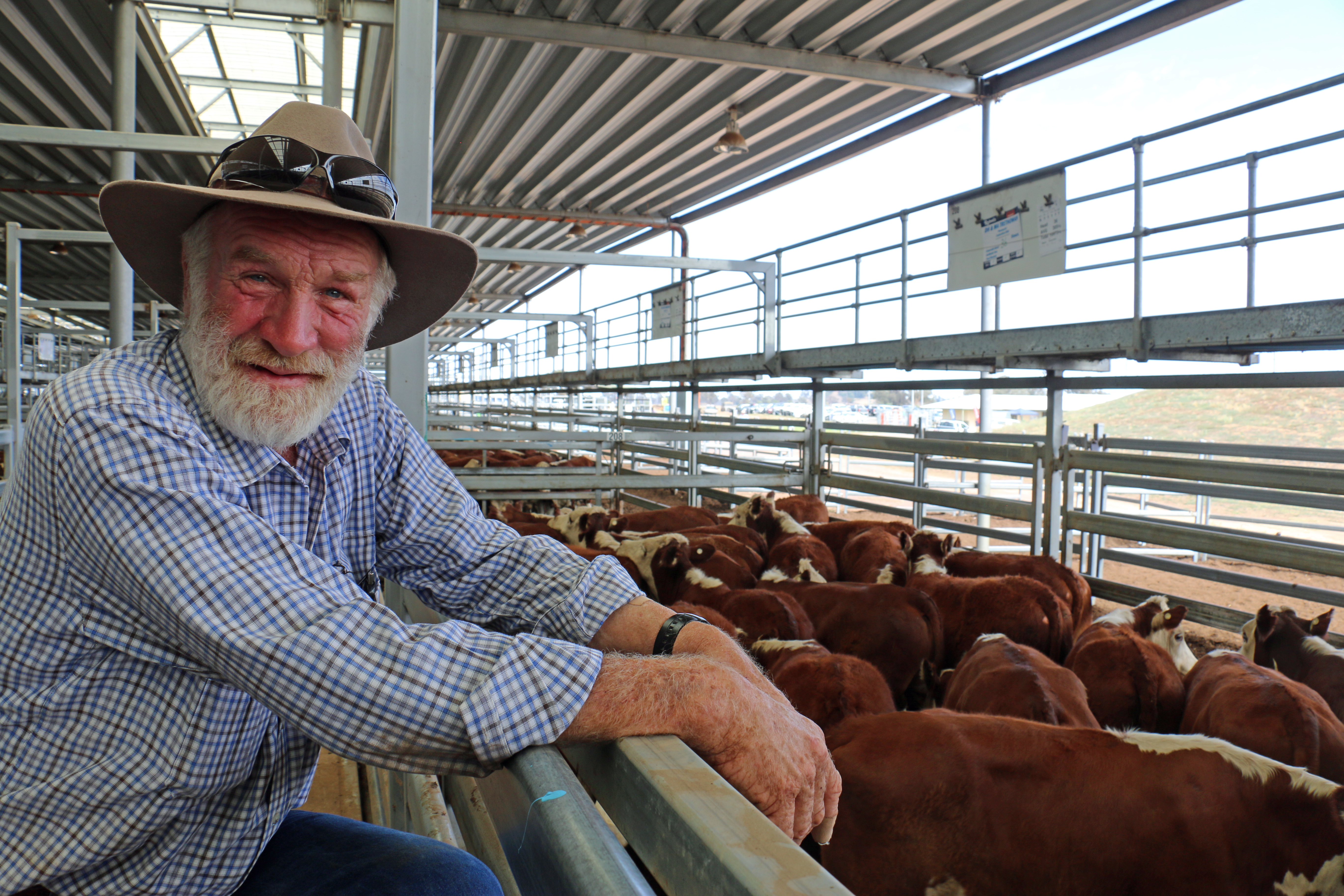 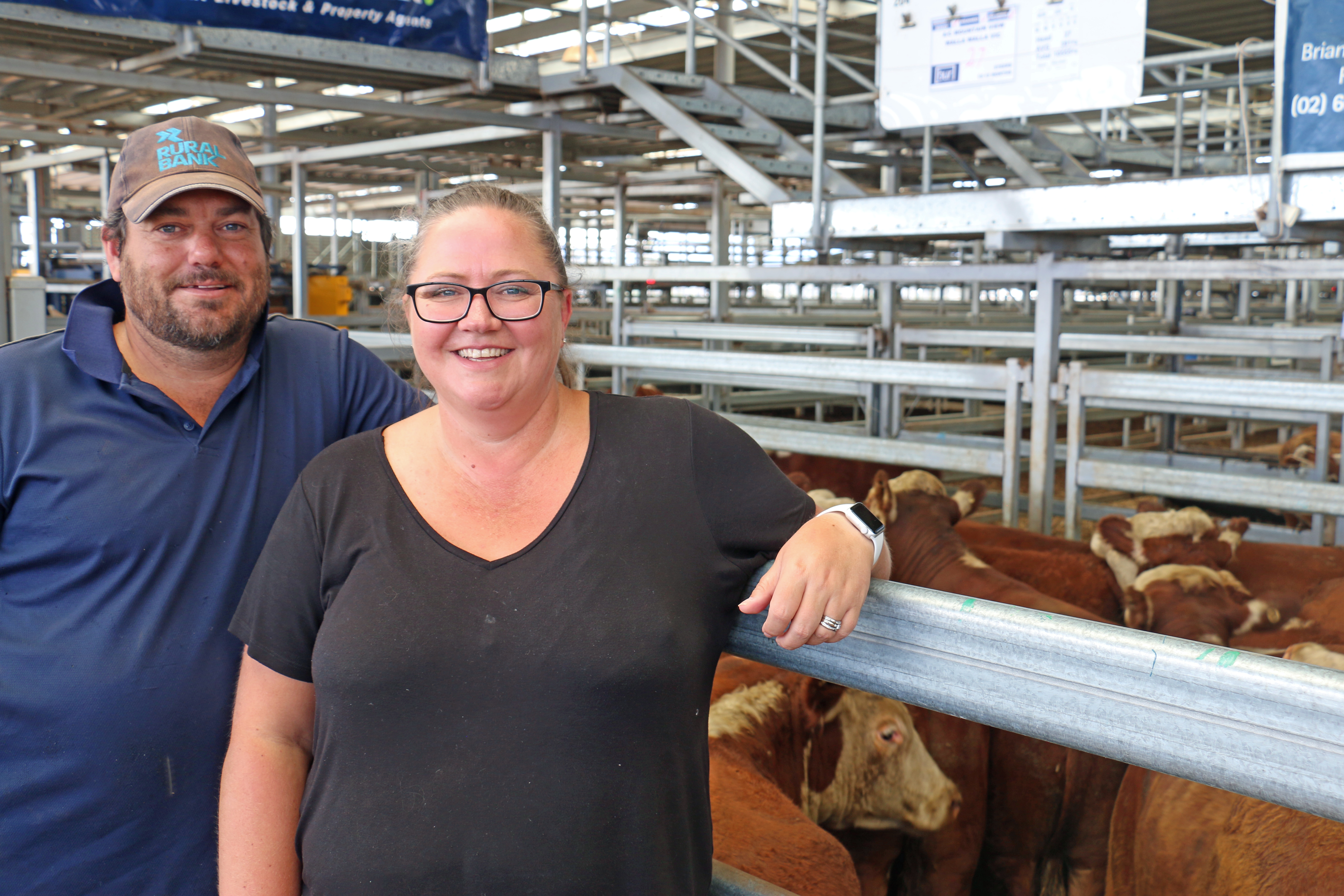 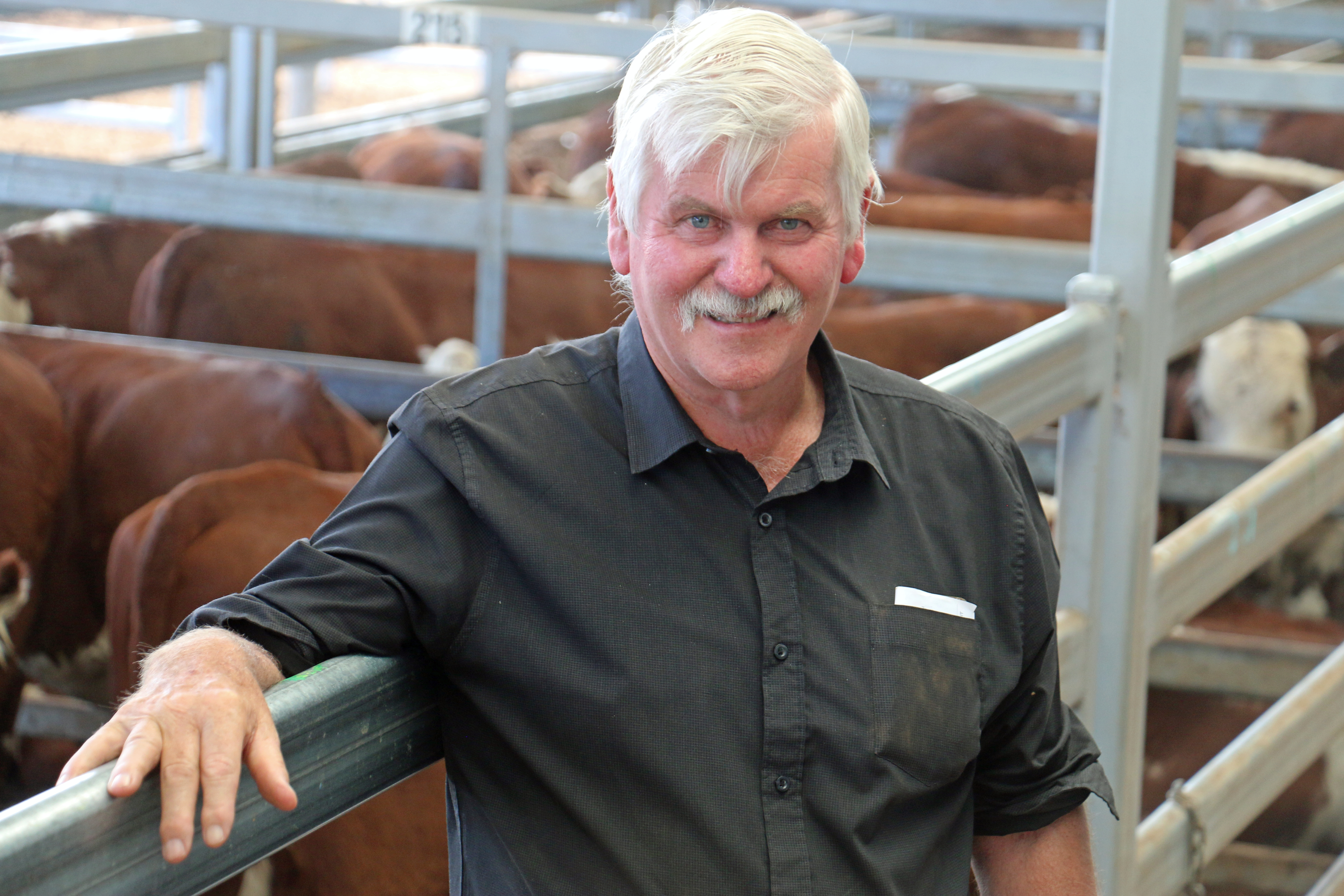 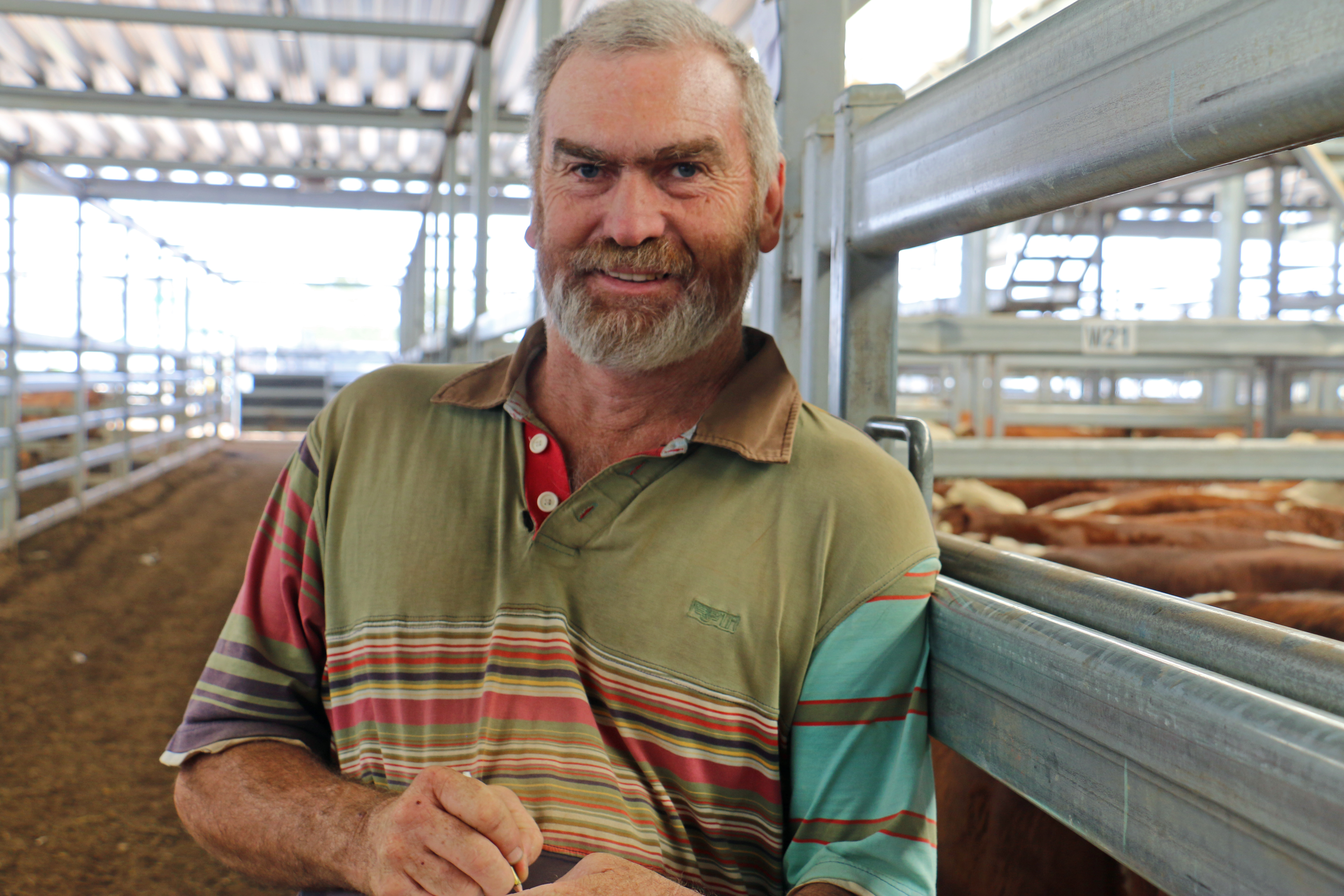 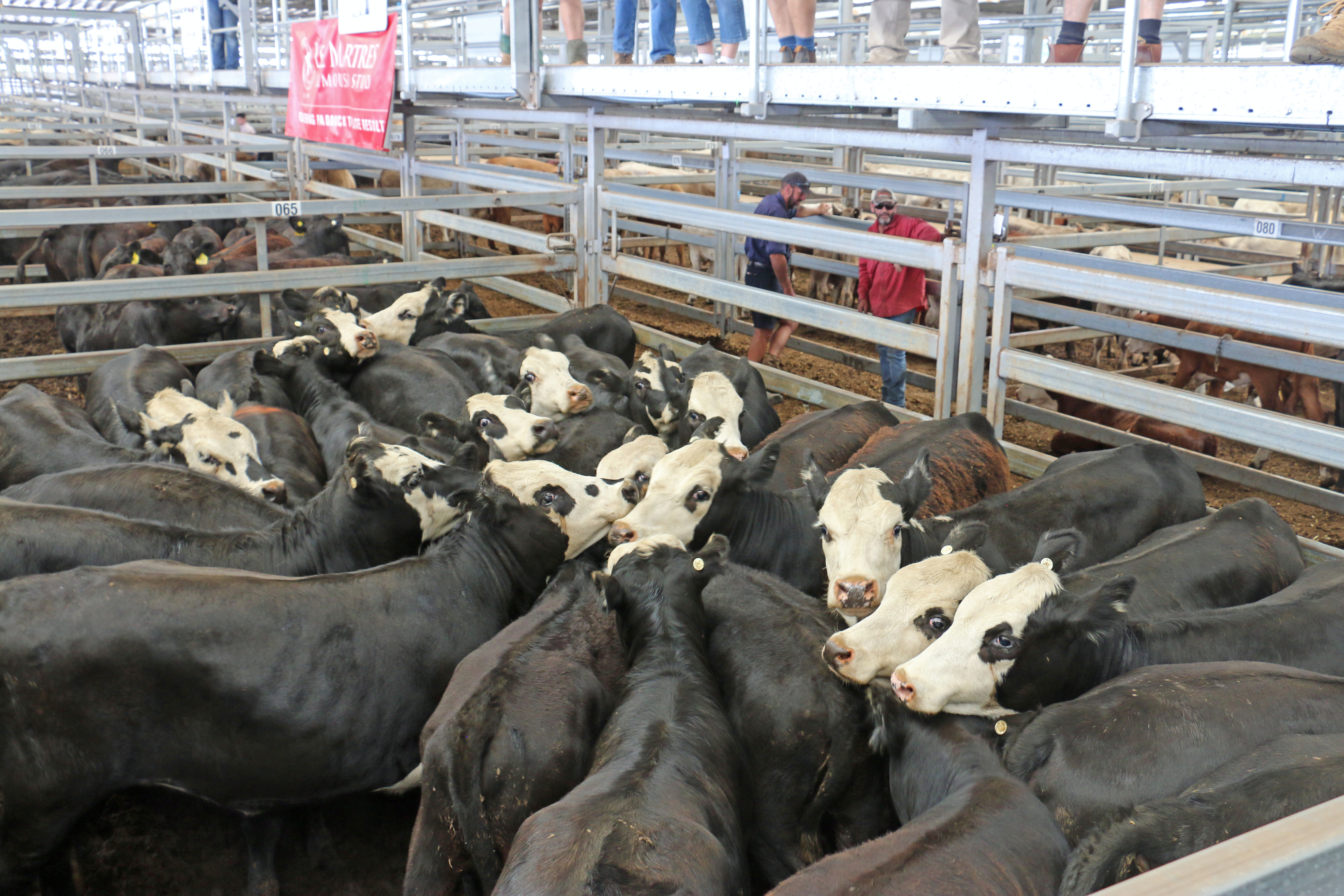