Whiteface Weaners Top at 345c/kg in Solid Sale at Wodonga 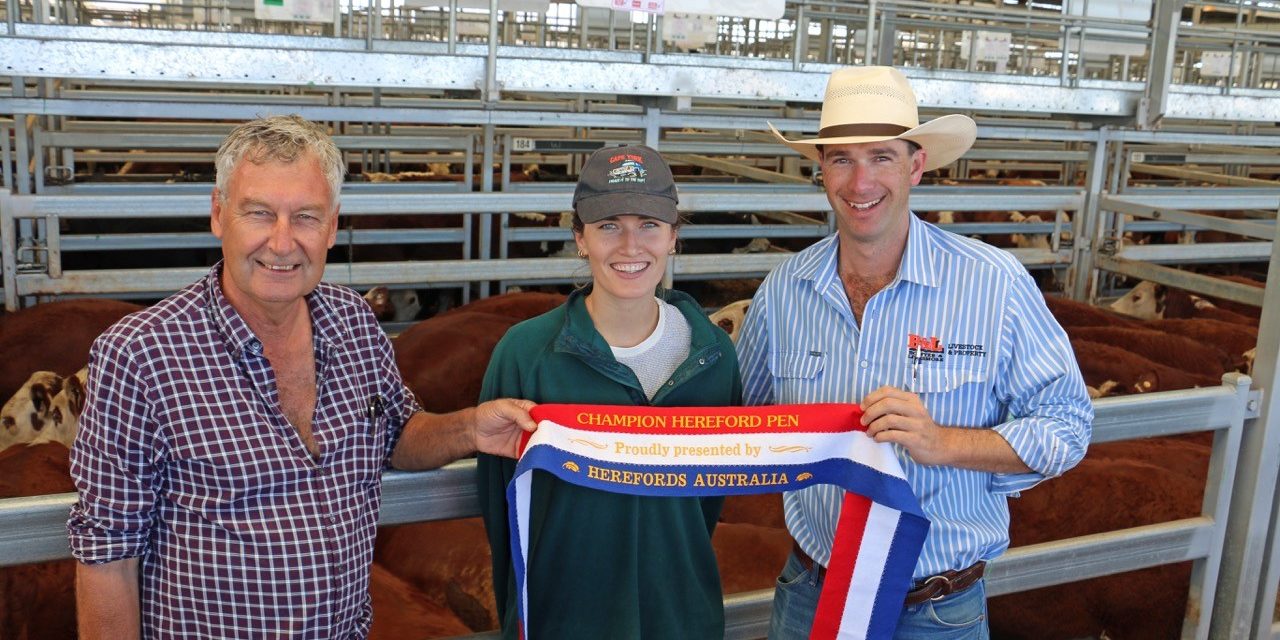 Lot feeders and steer finishers were out in force at the Wodonga Premier Hereford/Euro and Other Breeds grown and weaner sale, paying to 345c/kg for whiteface weaners.

Topping the purebred weaner offering on a dollars per head basis was David and Vicki McCallum, Tooma, Vic, with a pen of 20 Yavenvale blood autumn drop steers, 418kg, selling for $1230 or 294c/kg to Ladysmith feedlot.

The pen of 30 Bayunga bred and blood steers weighed 359kg and sold for $1070 or 298c/kg to Upper Murray steer finisher David Braniff, Corryong.

Mr Clements described the steers as even with plenty of bone and weight for age.

He had sourced 800 head over the past week at an average of 306kg and 301c/kg for backgrounders in the NSW central tablelands.

David Sleigh offered 110 steers at Wodonga, with liveweights down on the back of late spring rain.

Opening the run of yearling and heavy grown steers was A L Heinecke, Tumbarumba, with a pen of Yavenvale blood steers, 521kg, snapped up by Peter Steer, JBS Australia, for $1465 or 281c/kg.

McKillop Pastoral, Dederang, Vic, topped the overall weaner yarding on a cents per kilogram basis with a pen of 17 black baldies, nine to 10 months, 368kg, and sold to Corcoran Parker Wodonga at 345c/kg or $1270

“We had strong feeder competition on the heavy end of the grown steers and weaners,’’ Mr Shea said.

“This is an indication as we go forward into 2019 there will be a lack of supply of heavier cattle suitable to go straight on feed.

“it is good to see those backgrounders and fatteners stepping in to buy today – they sold cattle for $1800-$2000 in the last six to eight weeks and are able to step in at the front end to buy cattle with weight for finishing next January .

“The cattle look to be reasonable buying for those fellows to put away – it’s fair to say there is a bit in it for everyone at the moment.

“Tasmanian buyers made their presence felt in the heavy end of the heifer run, plus lighter heifers to put away for a 12 to 18 month period.’’

Mr Shea said there was an opportunity in the middle run of steers at 275-301c/kg on the lighter end.

He said the sale drew solid competition for females suited to feed, with isolated sales of heavy joinable heifers.

“If we have a break in the season, good quality females will be hard to procure.’’

He bought 96 head averaging 355kg and described the sale as “solid’’.

“The quality of the cattle is good considering the late spring in this region,’’ Mr Harley said.

Peter and Robyn Sandy, Swifts Creek, were among the high country producers turning off cattle early before the mountain calf sales in March.

Their top pen of Hereford and Shorthorn-Hereford cross steers, Mawarra and Injemira blood, 291kg, sold for 326c/kg or $950.

Mr Sandy said seasonal conditions had dictated an early turn-off and he was “over the moon’’ with the price.

“We have been low on feed for a long time and water will be an issue.

“In 2018, we had 498mm but it was a mixed bag – however there will be fresh calves out of Omeo and Benambra for the sales.

“They were nice and quiet as they have been fed all winter.

“For what could be around the corner, the buyers were ambitious today.’’

“I had been hoping for 300c/kg – Herefords always seem to sell better at Wodonga than Euroa,’’ he said.

“I like the Hereford temperament as I have to do the cattle work on my own.

“I have tried other breeds but these are better to handle and I’m happy with how they presented today.’’

Mr Braniff turns off over 150 grassfed steers a year at 700kg liveweight to Teys Australia, Wagga.

“I like to buy them at 380kg – the Hereford is reliable, can store up growth for all seasons and has a beautiful temperament,’’ he said.

“The sale was dearer than anticipated as it was 290c/kg from the word go.’’

In the heifer pens, Gordon Paton, Maranoa Pastoral, Tallangatta, topped the sale with Newcomen and Bowmont blood females, 15-16 months, and 411kg, selling for $1135 or 276c/kg.

“Herefords are easy to handle, hold their condition in tough times and I like their temperament,’’ he said. 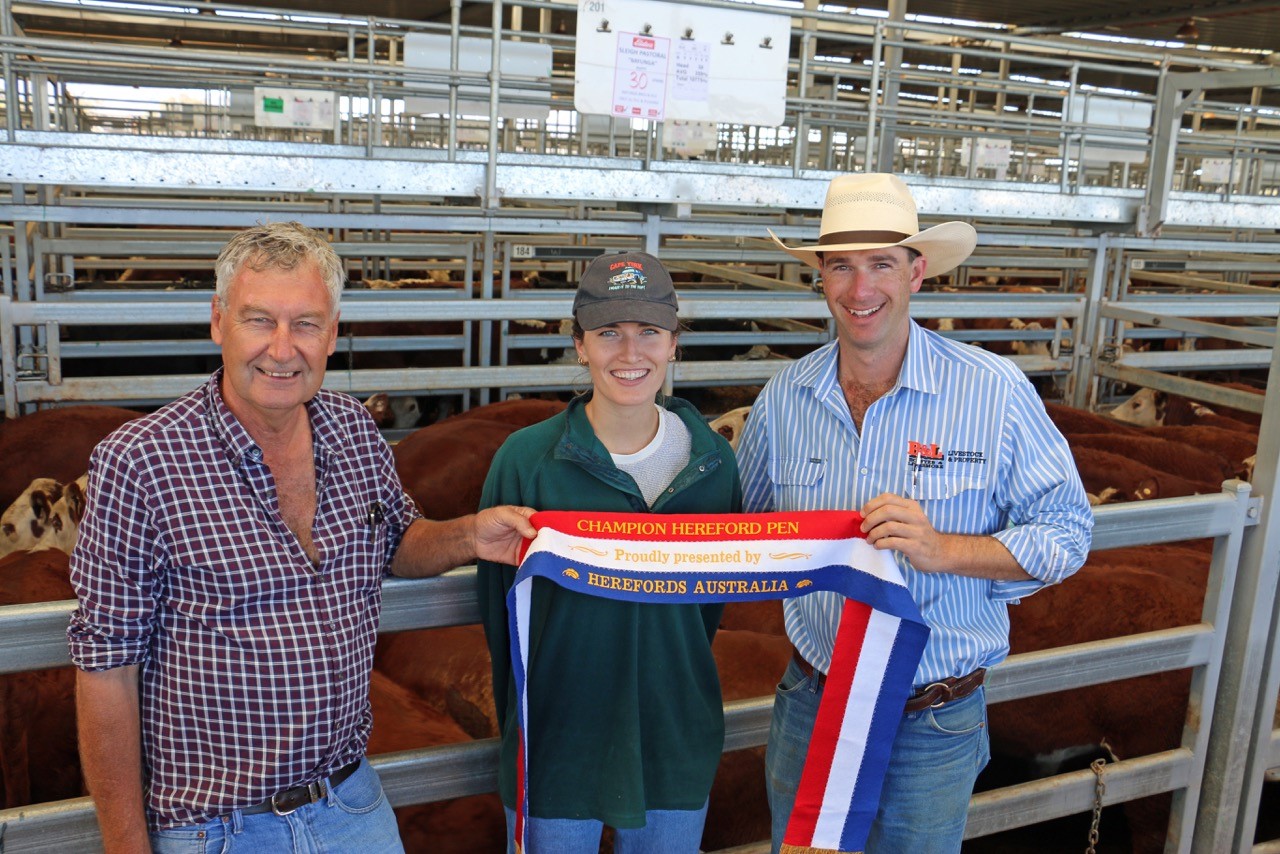 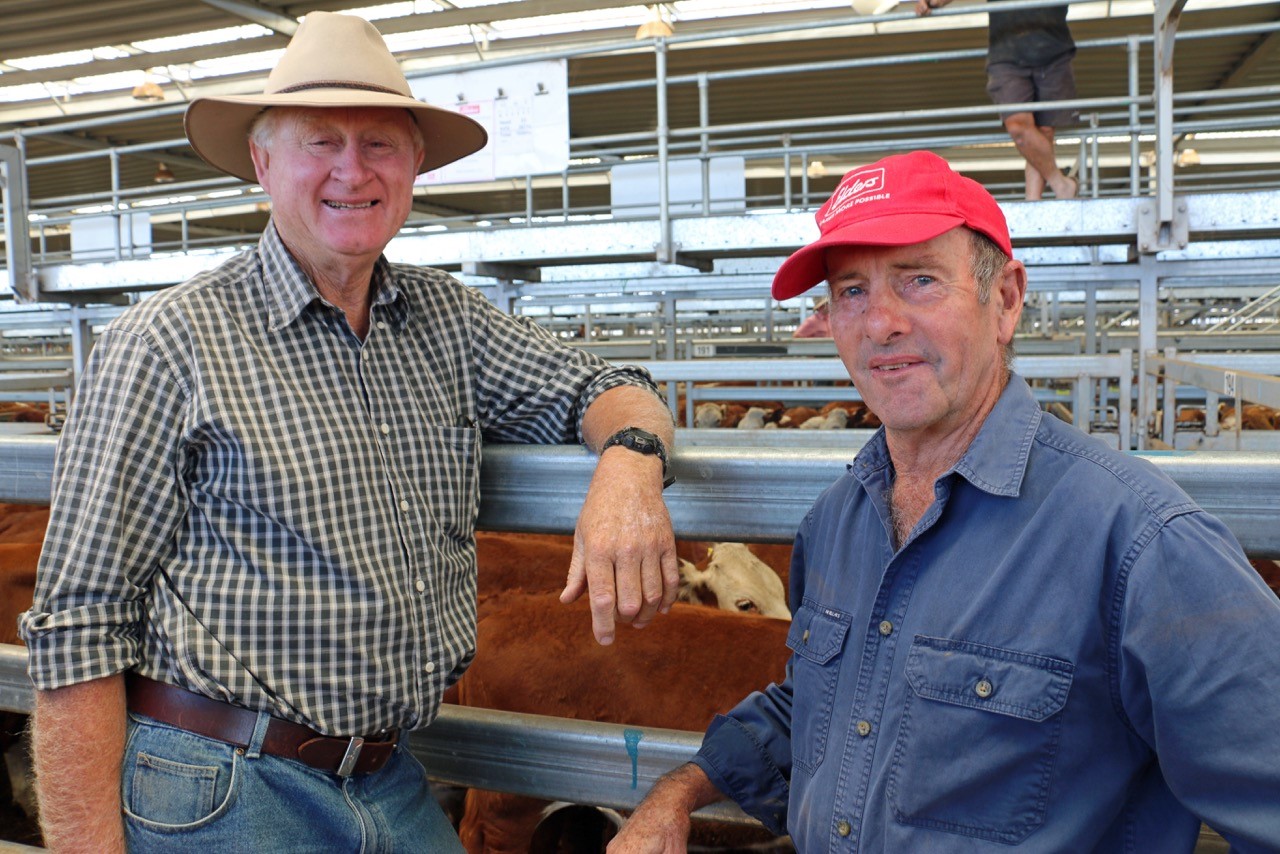 Herefords Australia director Pat Pearce with Richard Long, Howitt Plains, at the Wodonga Premier Grown and Weaner sale. Richard sold a pen of 23 Yavenvale and Glentrevor blood steers, 307kg, for $920 or 299c/kg. Richard selects bulls in the top 5% for IMF, 10% for eye muscle area and 15% for growth. 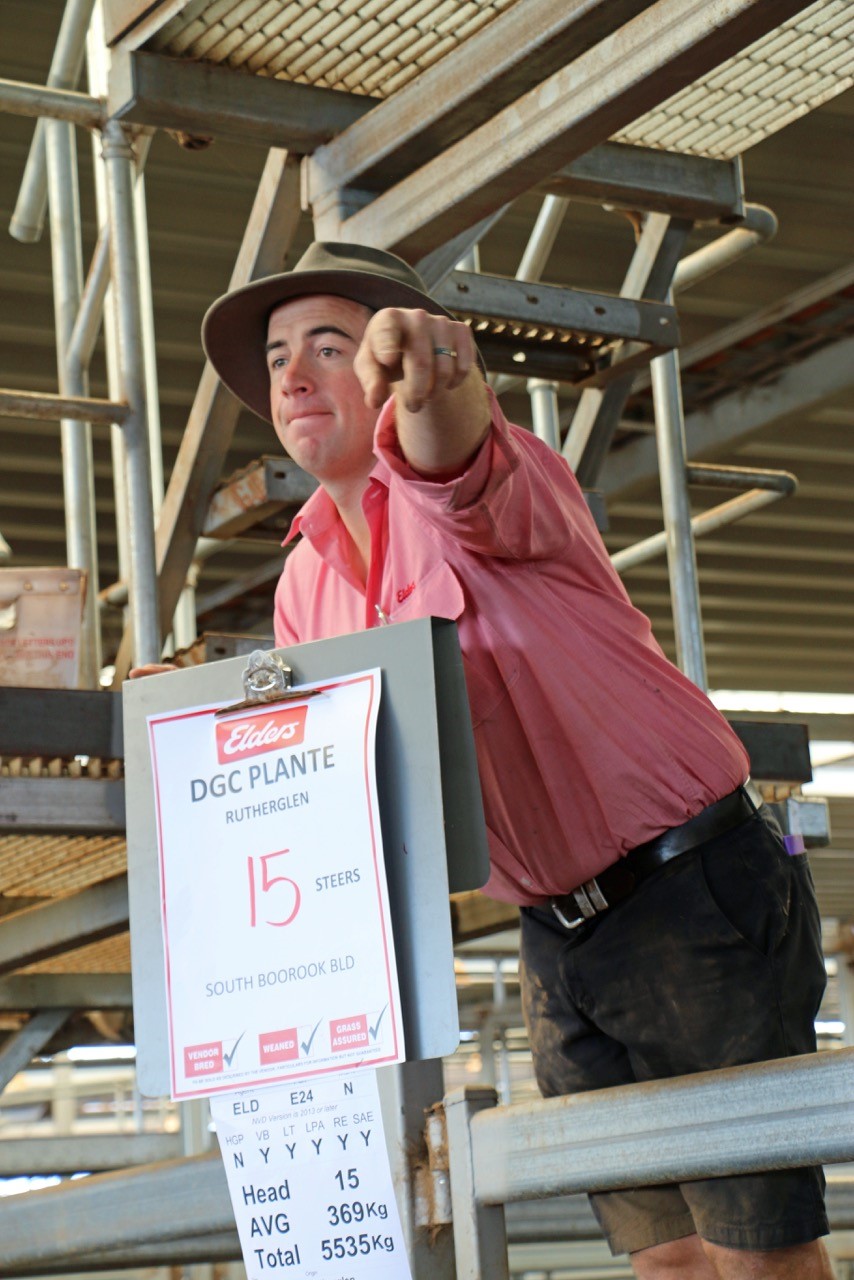 Elders Albury auctioneer Brett Shea spots bids during the offering of yearling and grown steers at the Wodonga Premier sale. The heavy steers topped at $1465 (281c/kg) for Yavenvale blood cattle, 521kg, sold by A L Heinecke, Tumbarumba, to JBS Australia. 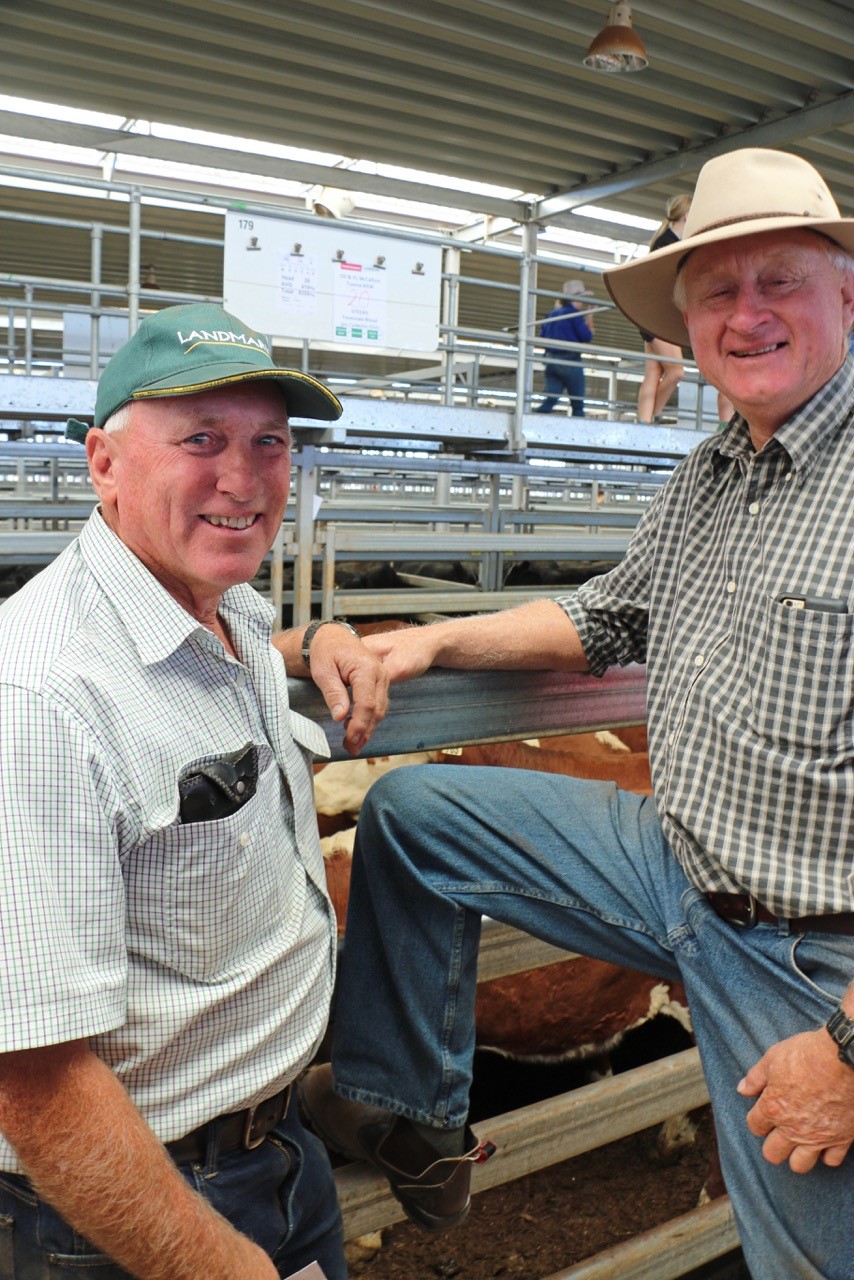 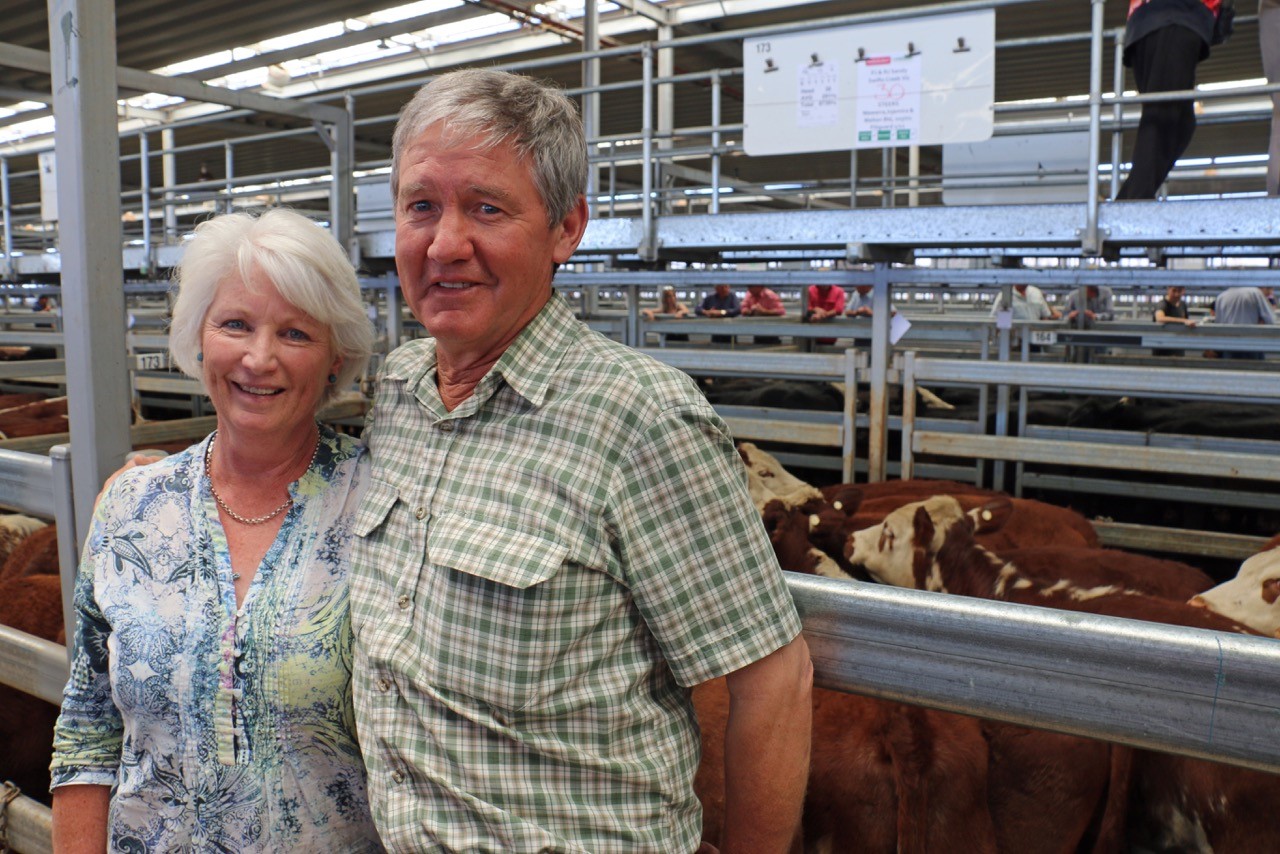 Robyn and Peter Sandy, Swifts Creek, topped the Hereford weaners on a cents per kilogram with their pen of 30 Hereford and Hereford/Shorthorn cross steers, Mawarra and Injemira blood, and weighing 291kg. The steers sold for 326c/kg or $950 and normally would have been offered at the Mountain Calf sales. 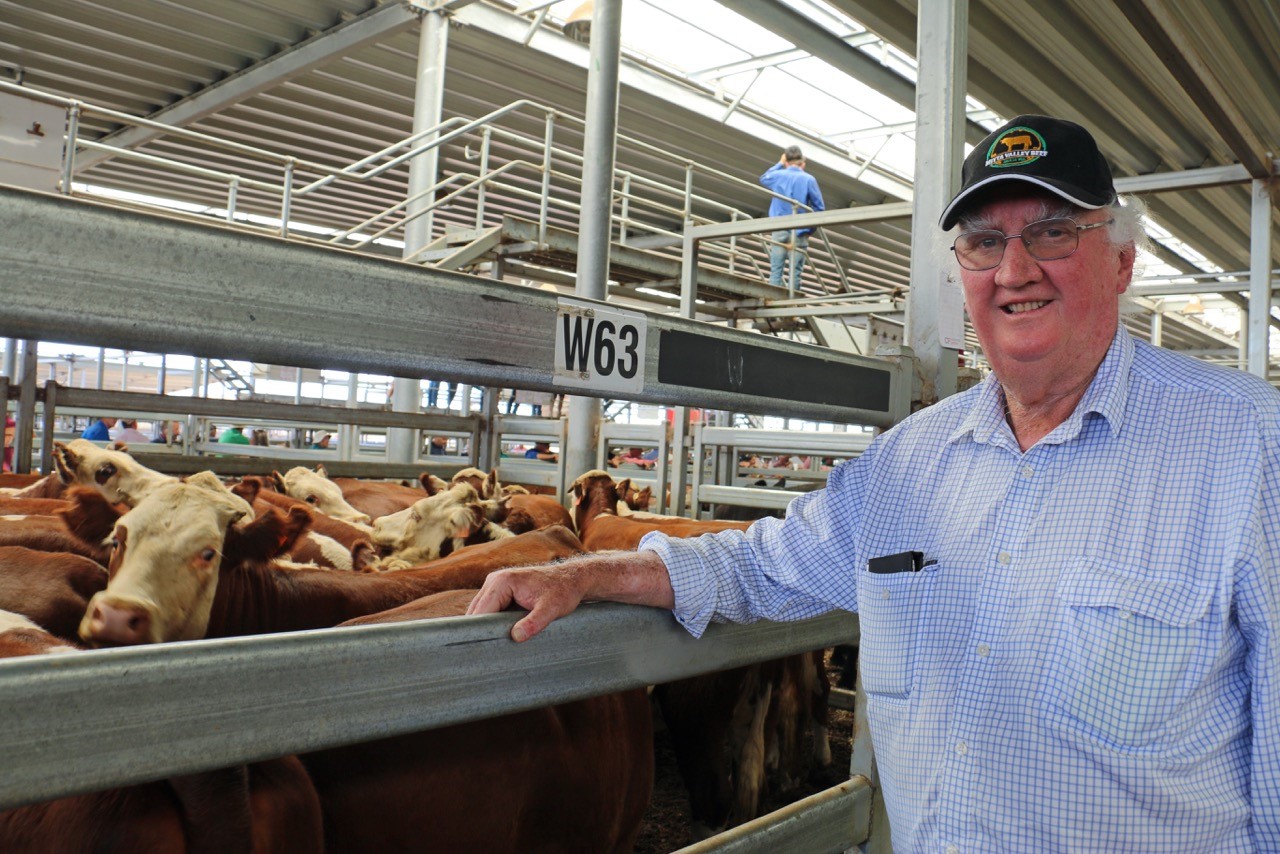 Gordon Paton, Maranoa Pastoral, Tallangatta, topped the heifer offering at Wodonga with a pen of 31 Newcomen and Bowmont blood females, 15-16 months, and weighing 411kg. They sold for $1135 or 276c/kg to JBS Australia. 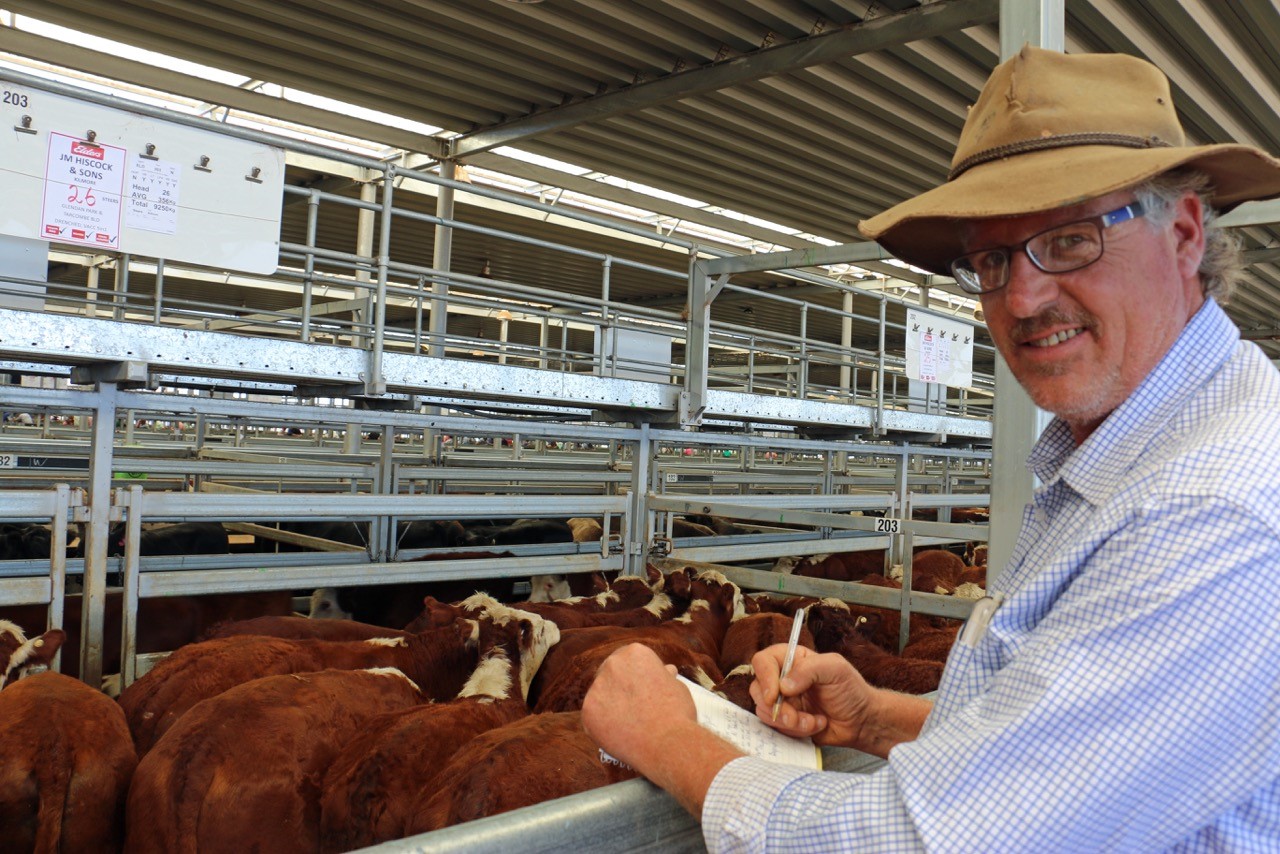 David Braniff, Corryong, Vic, bought 77 Hereford steers for grass finishing to 700kg live weight for Teys Australia, Wagga. He paid from $1070 to $1275 for steers weighing 356-415kg. He likes the breed’s quiet temperament, reliability and finishing ability in all seasons. 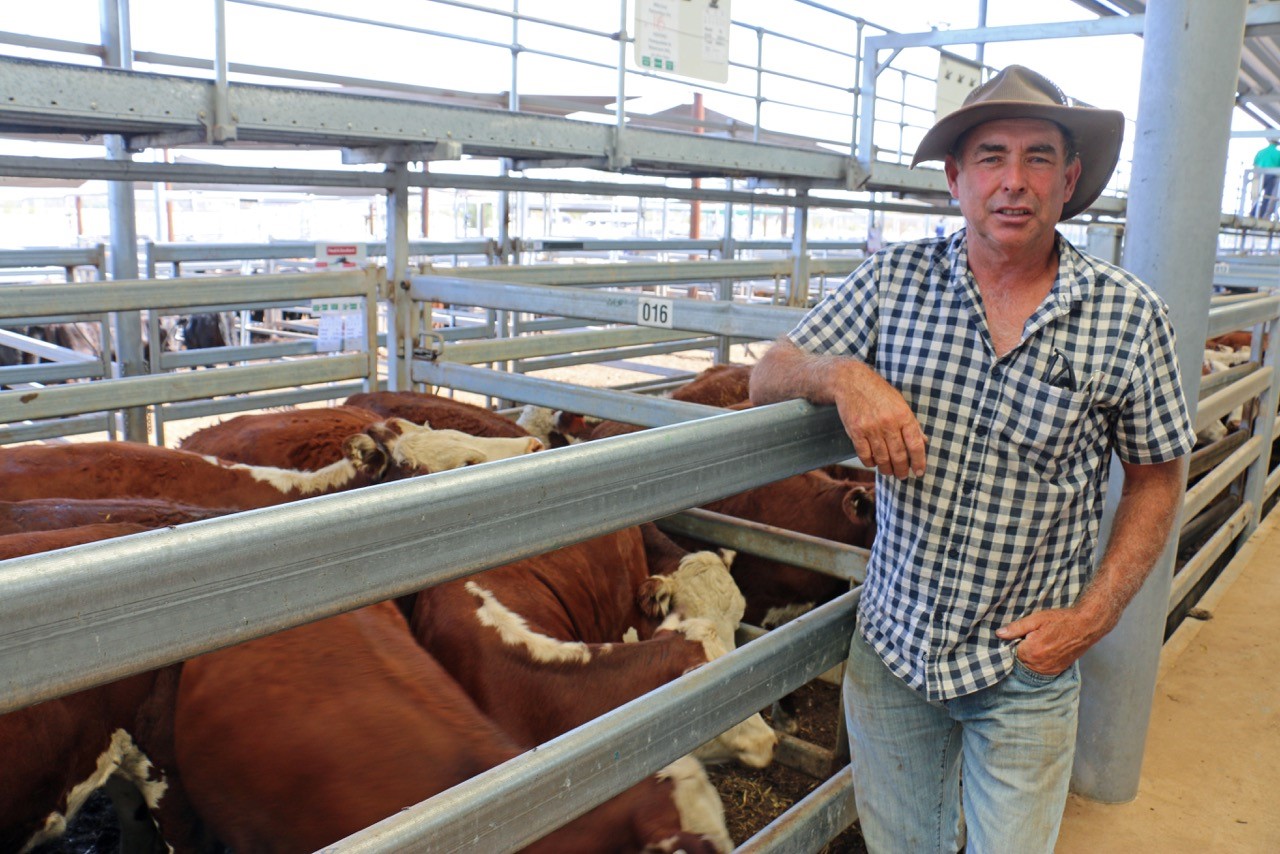 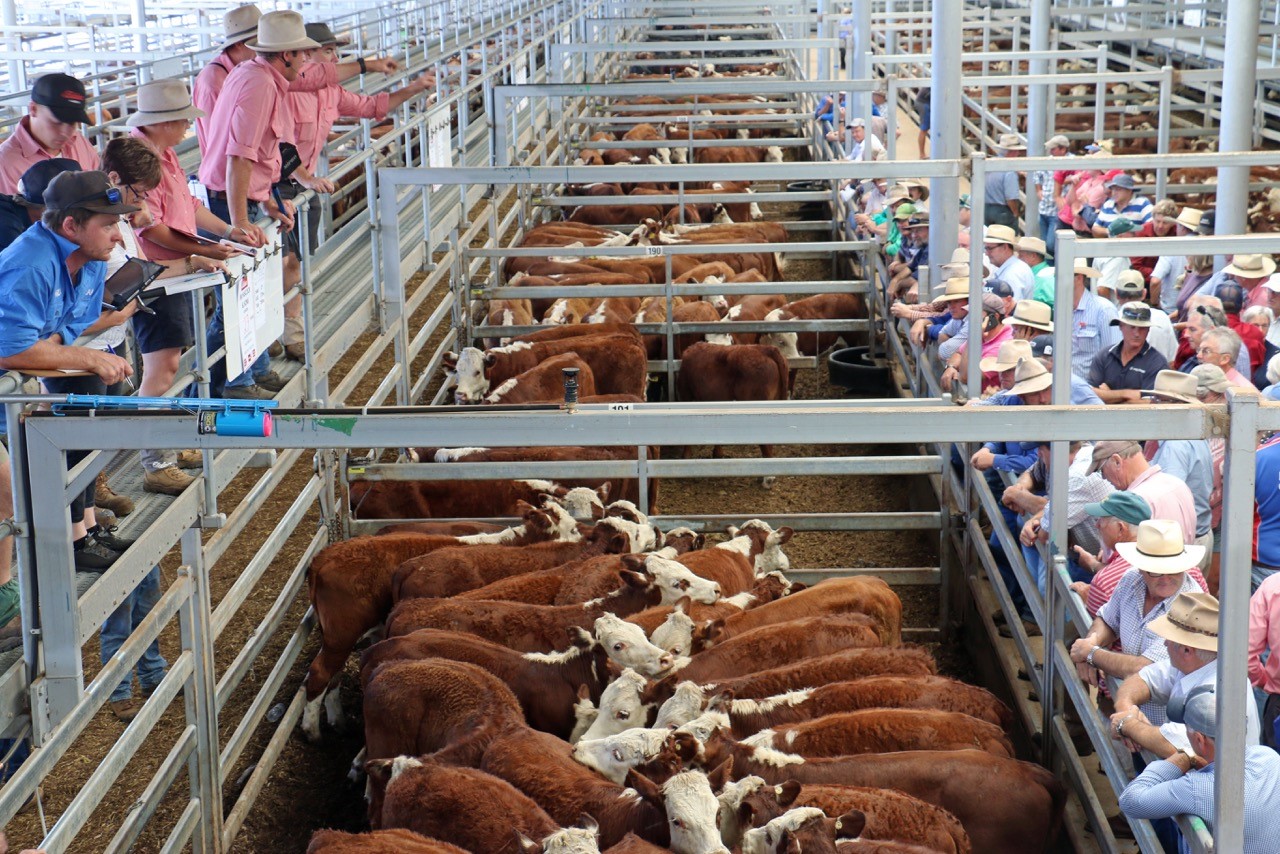 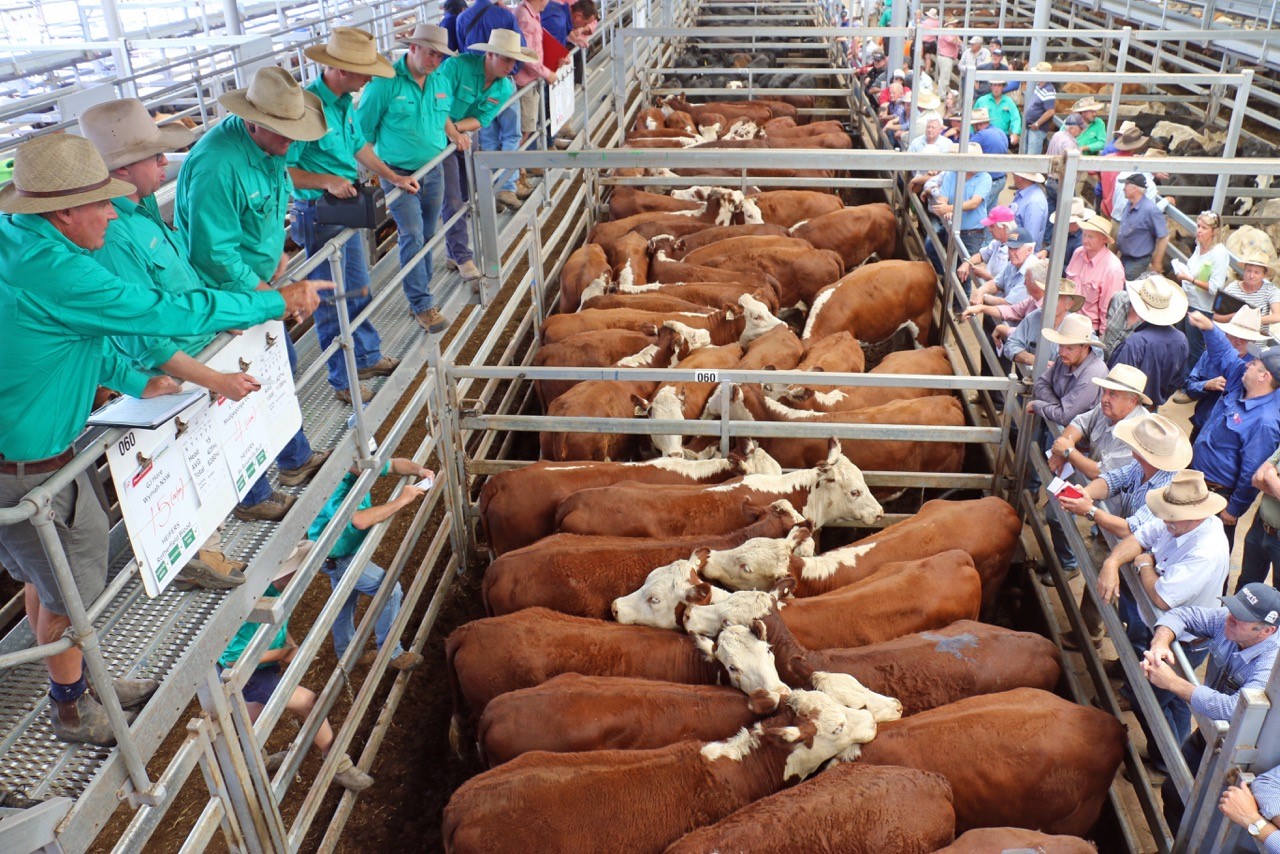