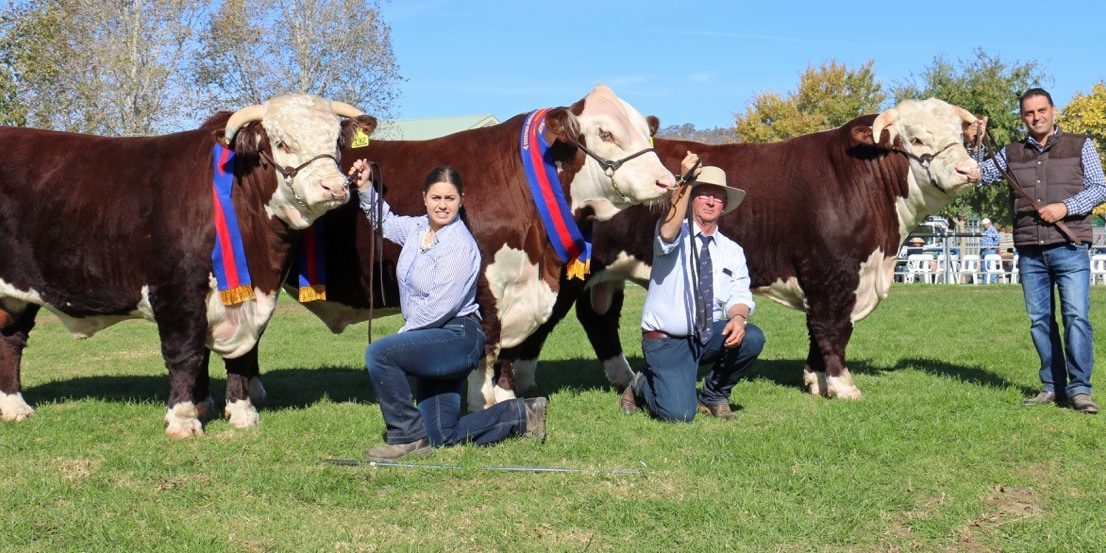 The whiteface breed flexed its muscles to post a solid average of $8183 and gross of $1.2 million at the 53rd Herefords Australia National Show and Sale.

Held on May 17 at Wodonga, the National sale drew 148 registered bidders and was interfaced with AuctionsPlus.

Billed as one of the largest multi-vendor sales in southern Australia, it catered for 55 vendors from five states, and featured yearling bulls for the first time.

National Sale committee chairman Alvio Trovatello said the inclusion of Top of the Drop, or yearling bulls, was well received by buyers.

Mr Trovatello was appreciative of the commercial underpinning from Gippsland and Victorian high country producers.

He said despite dry seasonal conditions in NSW, bulls had sold well into the New England and northern region.

“To sell 147 bulls in the current climate was pretty good,’’ he said.

A new client for Glendan Park, Mr Robertson was impressed with the bull’s carcase, length, soundness and overall sire appeal.

The 26-month-old bull was sired by Injemira Anzac AI J188 and out of Glendan Park Marinda J063.

Maddox weighed 1096kg and scanned with an eye muscle area of 144sqcm, rump fat of 25mm, rib fat of 15mm and a scrotal circumference of 43cm.

The bull had estimated breeding values of +115kg for 600 day weight, +6.3sqcm for eye muscle area and +1.1 per cent for intramuscular fat.

The 24-month-old bull weighed 944kg, was sired by Yarram Unique F107 and had BREEDPLAN figures of +4.1kg for birthweight, +23kg for milk and +5.0sqcm for eye muscle area.

“This bull is a total outcross for us on the dam’s side so we can fit him into our breeding program very well,’’ Mr Upton said.

“It was a strong line-up of bulls today and one of the better top ends we have seen for a while, so we thought it was good value for money.’’

He described the sale as tough in parts, reflecting seasonal conditions on the eastern seaboard.

“Overall, it was a good strong showing of cattle, unfortunately the prices just weren’t were everyone would’ve liked it, but we can’t help the conditions,’’ Mr Russell said.

He said the sale had yet again received strong support from Victorian high country producers.

“We recently had (62mm) with the country just starting to turn green but there is a long feeding job ahead of us into the winter.

“There is a lot of hay and cubes coming into the area.’’

“Considering the conditions everywhere, it turned out a reasonable sale,’’ he said.

Vendor Deanne Sykes was thrilled with the sale result, with the Mawarra team averaging $13,670 for nine bulls.

“The sale was good considering the seasonal conditions on the eastern side of the country – there was value buying today,’’ Ms Starr said.

He picked up Hylands Constable M722 for $16,000 from Geoff and Margaret Larsen, Hylands Herefords, Cootamundra, and was the underbidder on the $22,000 Leeway Maximise.

“I was looking for good growth for age – when you are getting good money for the calves, the bulls soon pay for themselves,’’ he said. 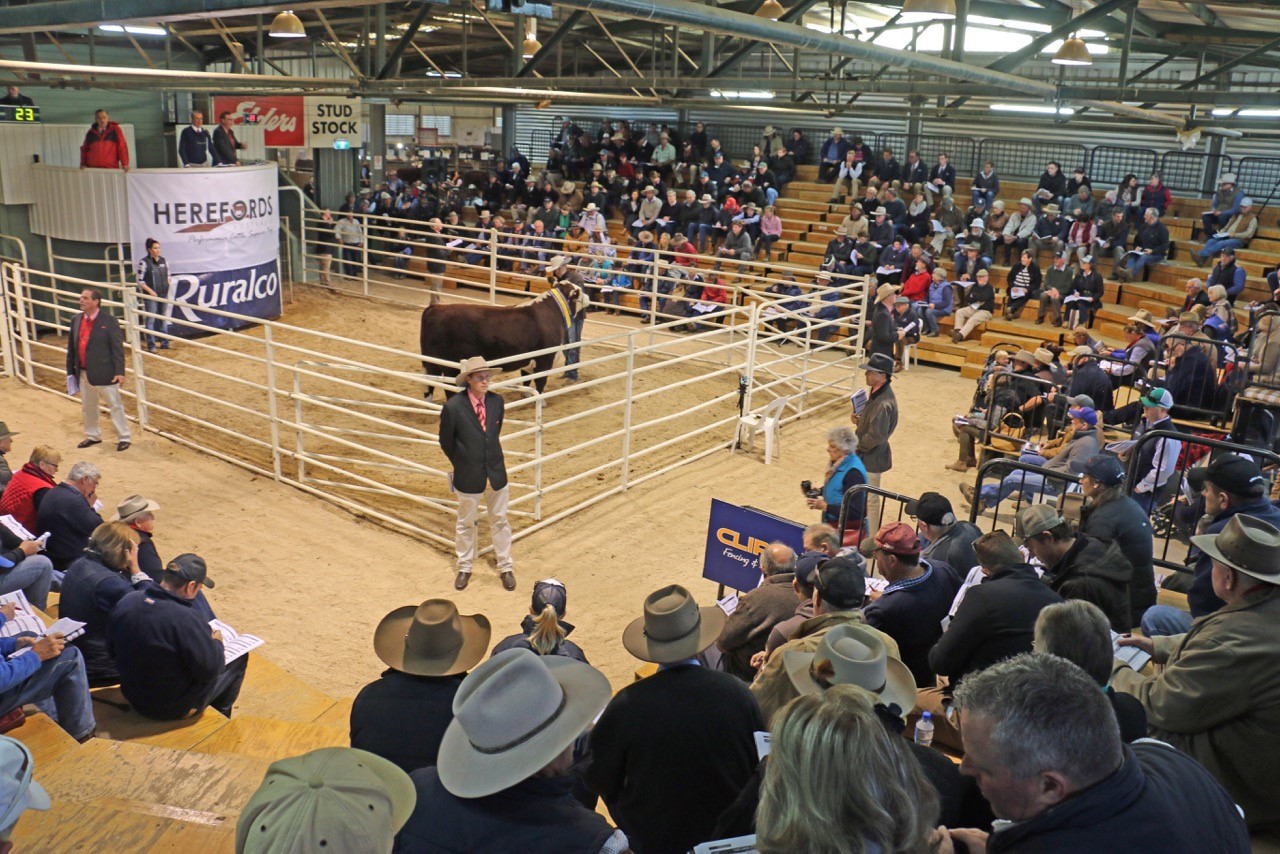 The Herefords Australia National Sale at Wodonga sold 147 bulls for a gross of $1.2 million and average of $8183. 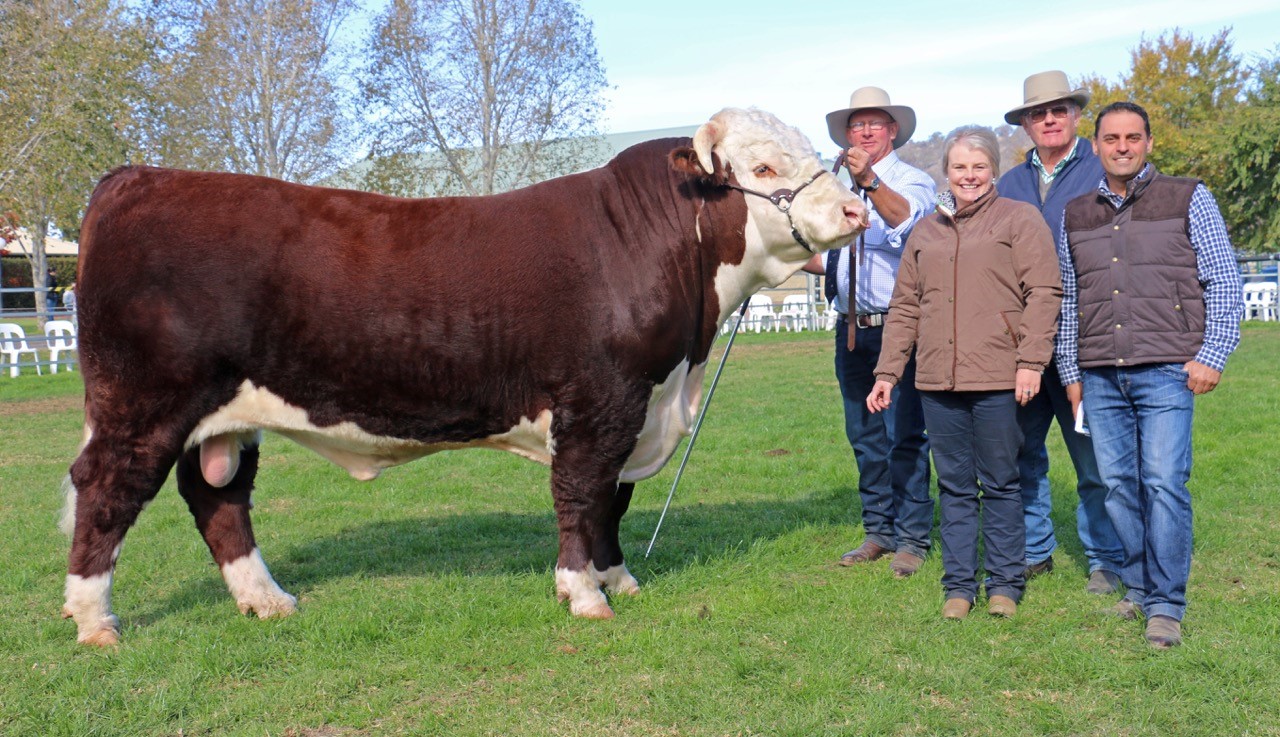 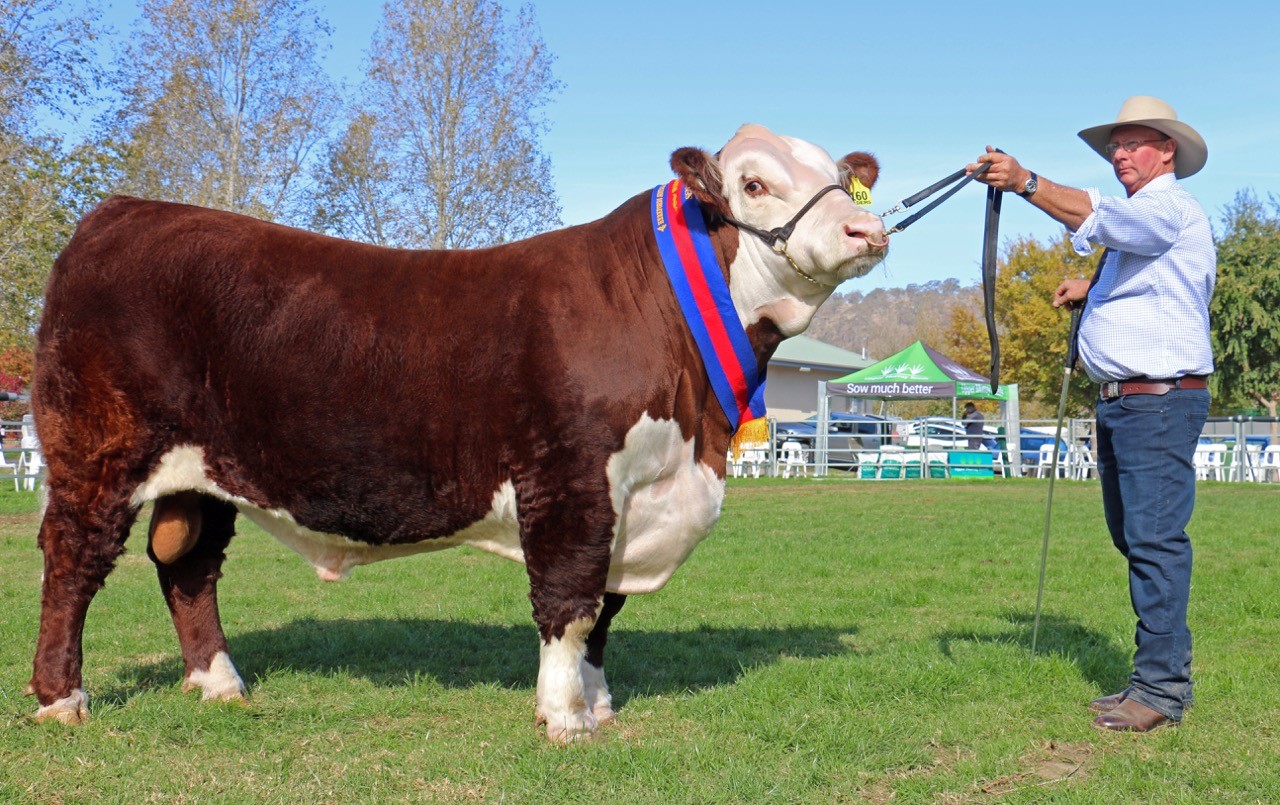 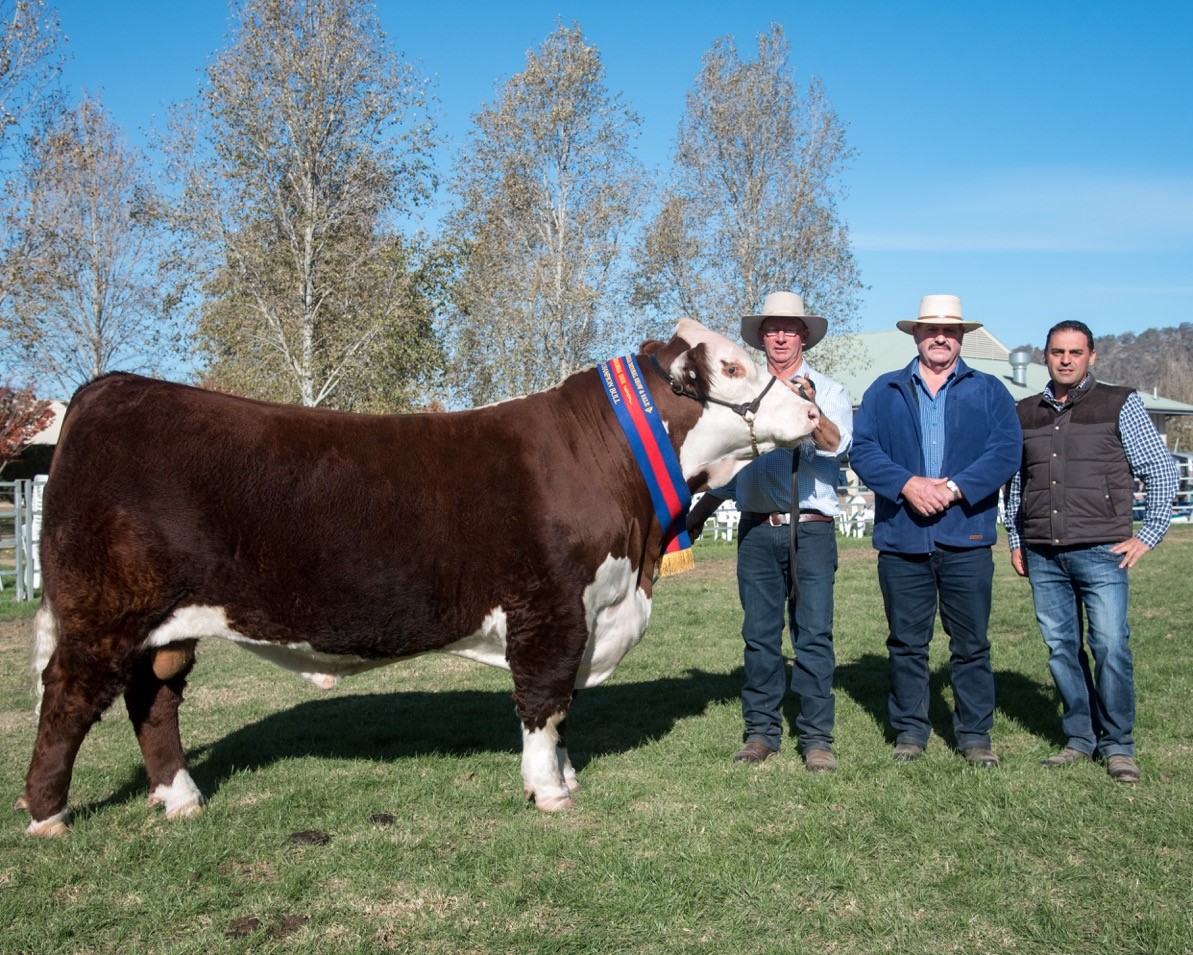 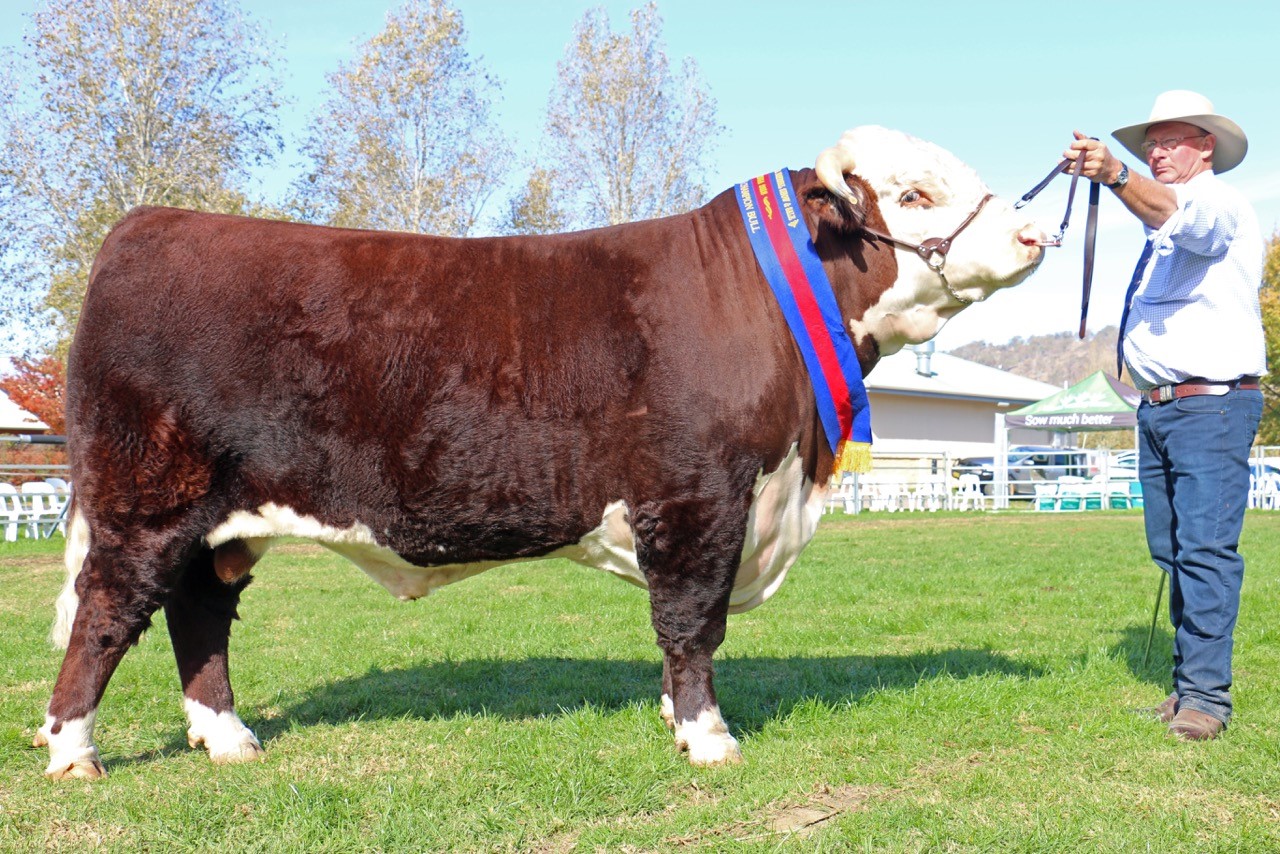 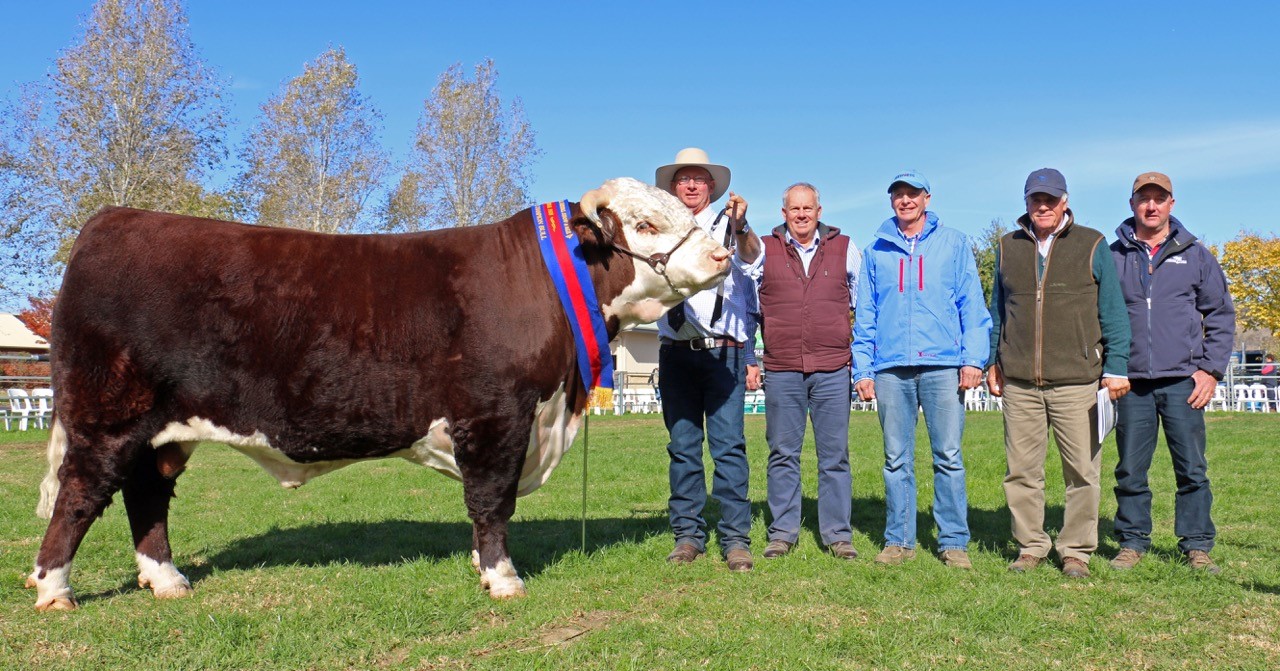 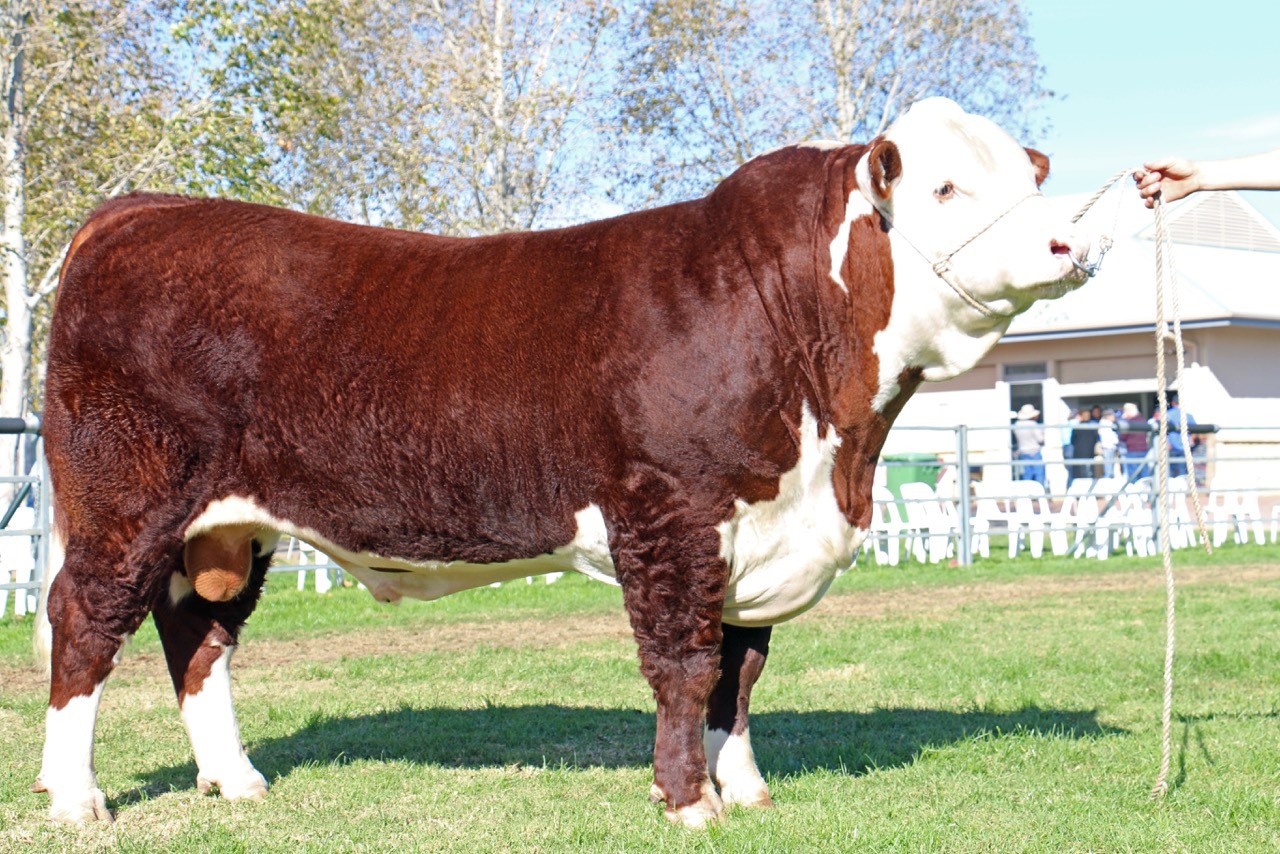 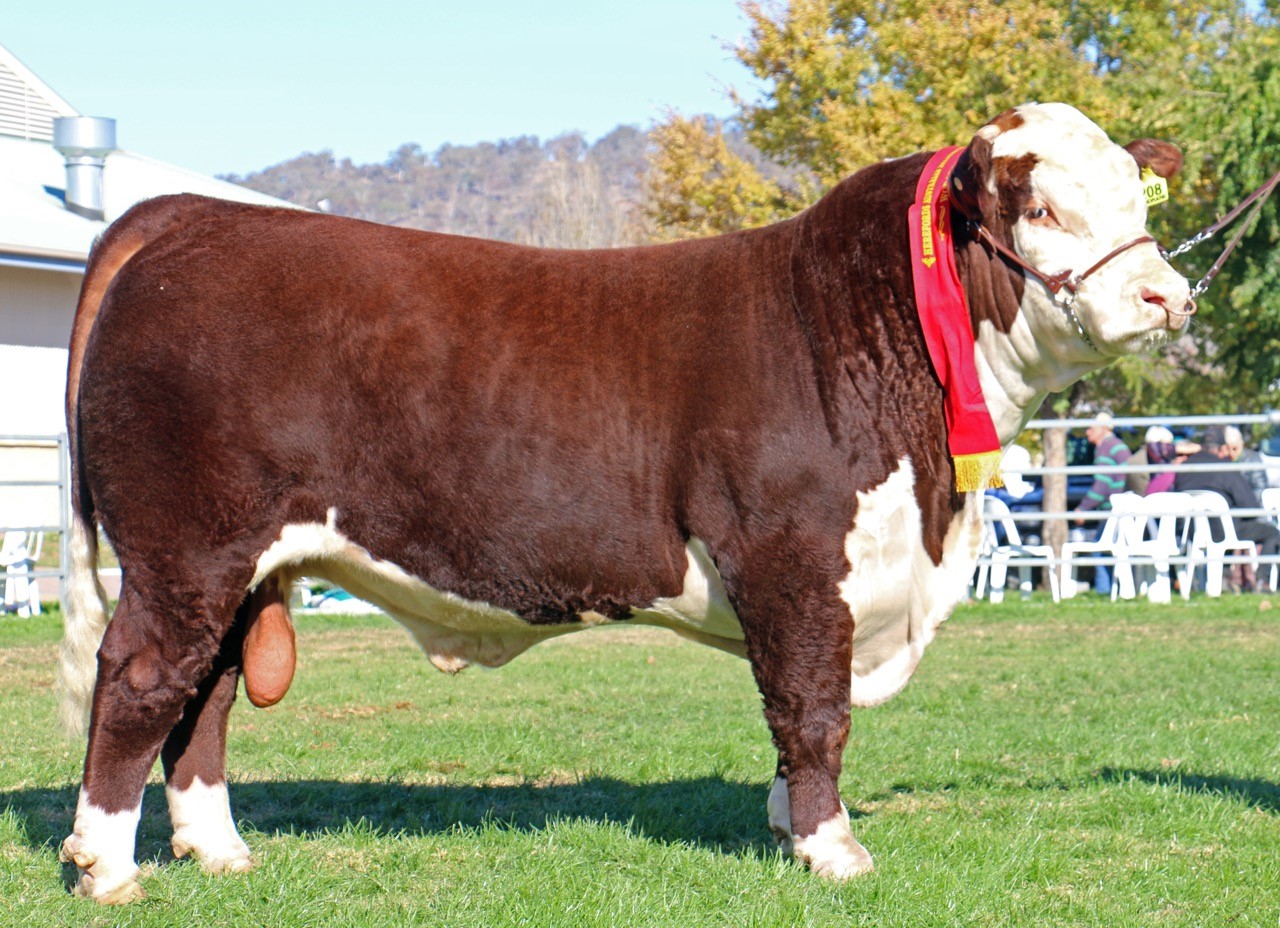 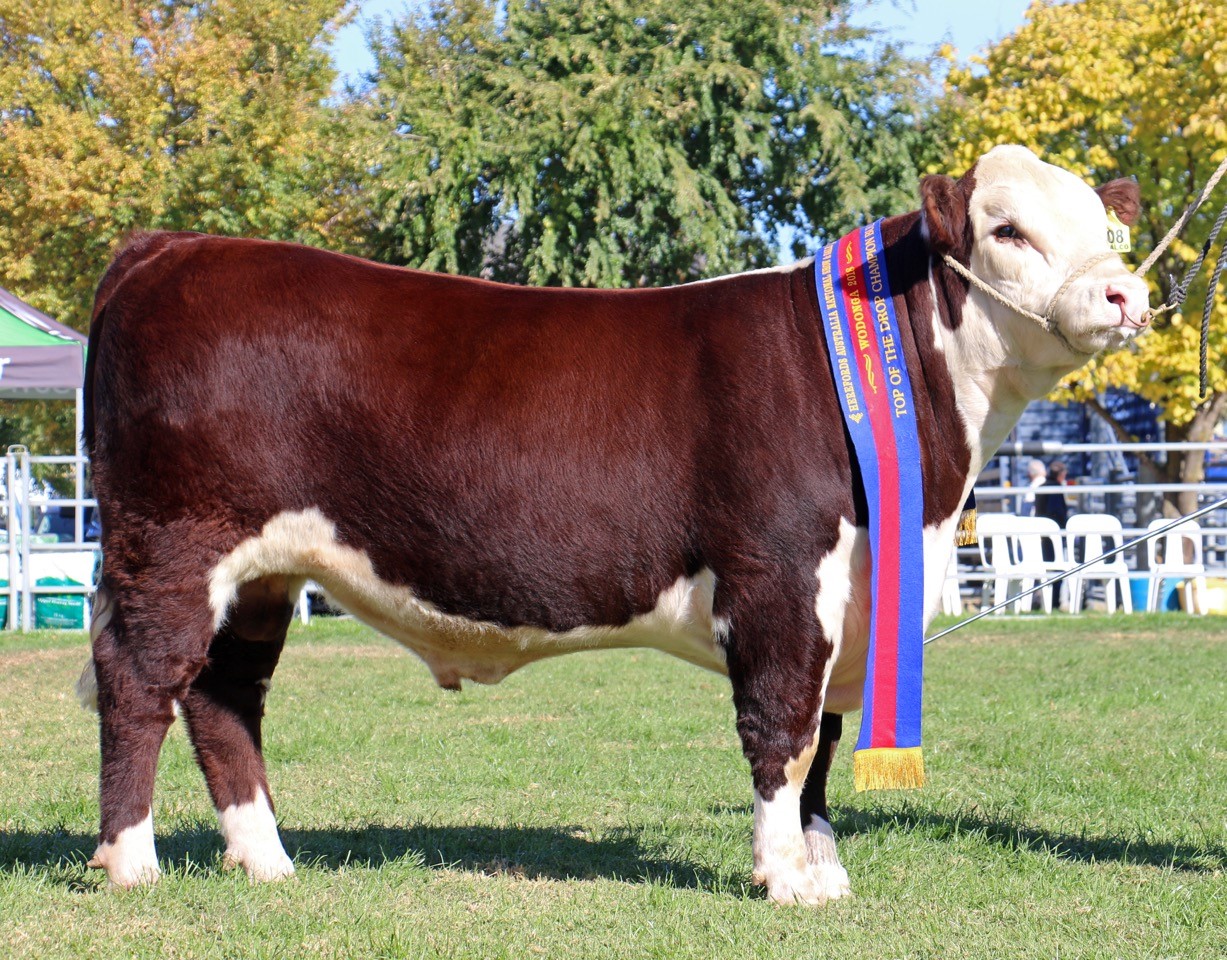 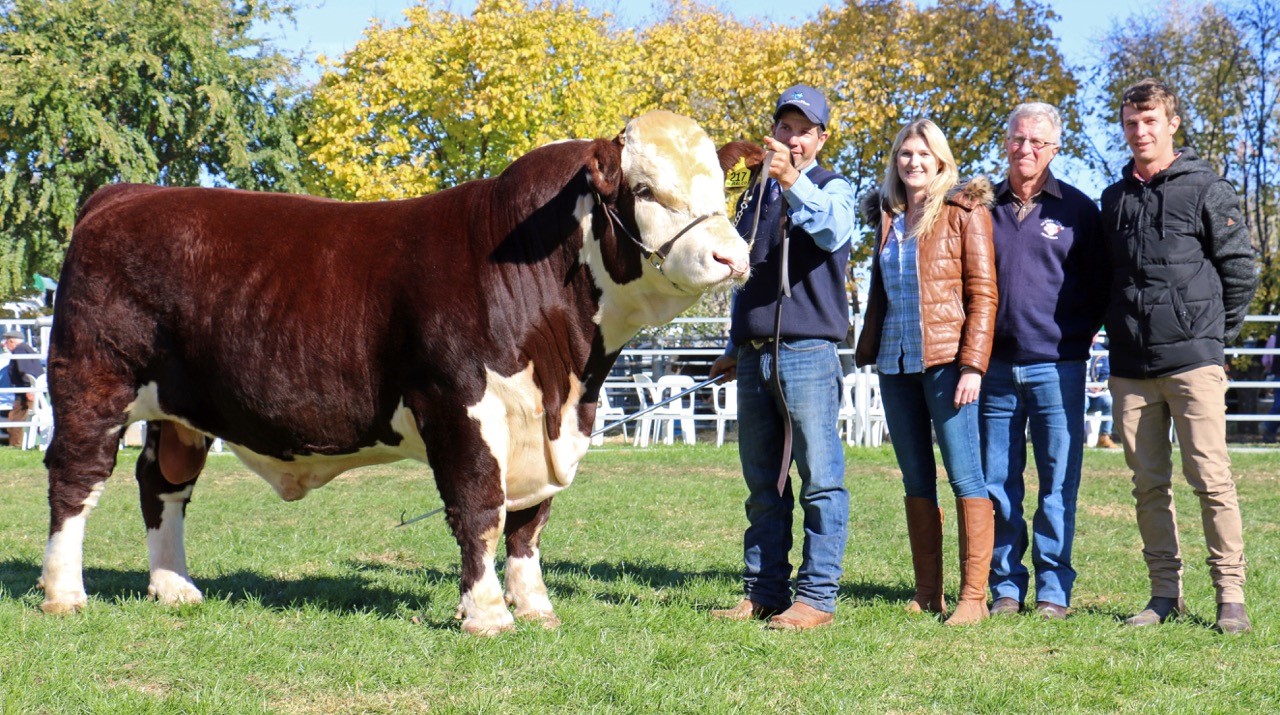 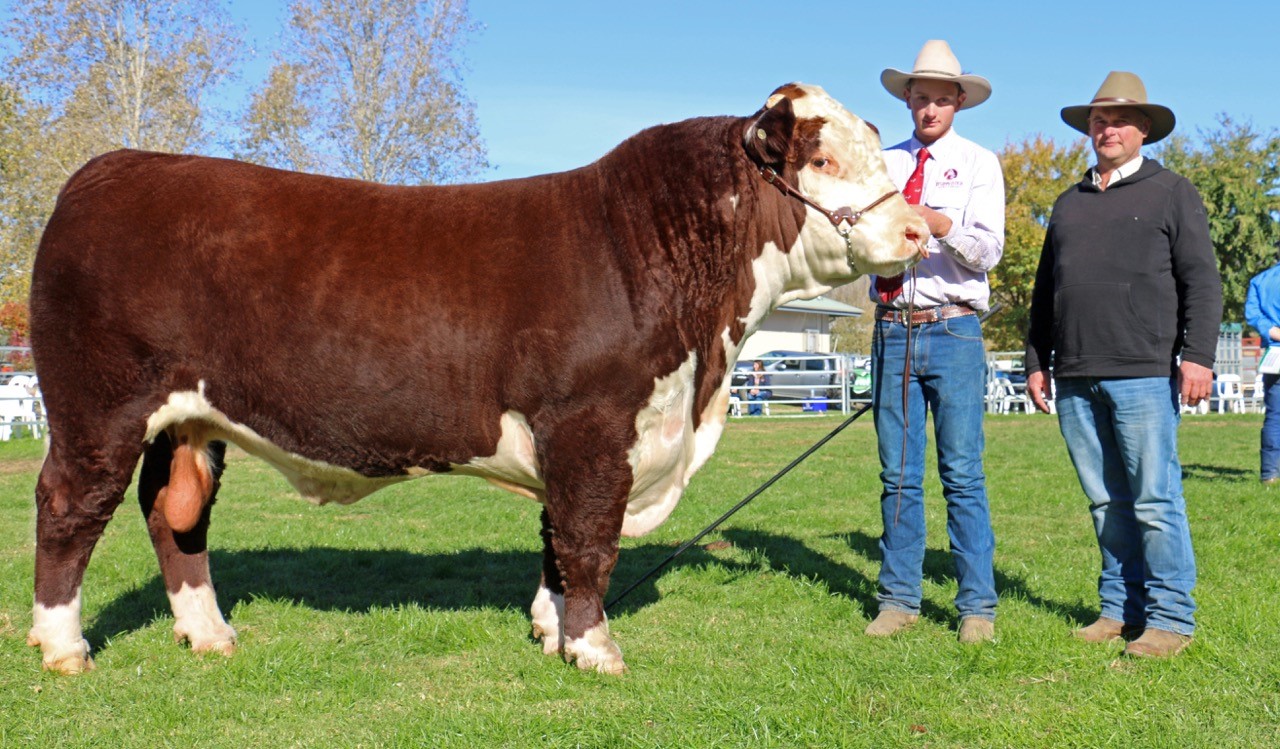 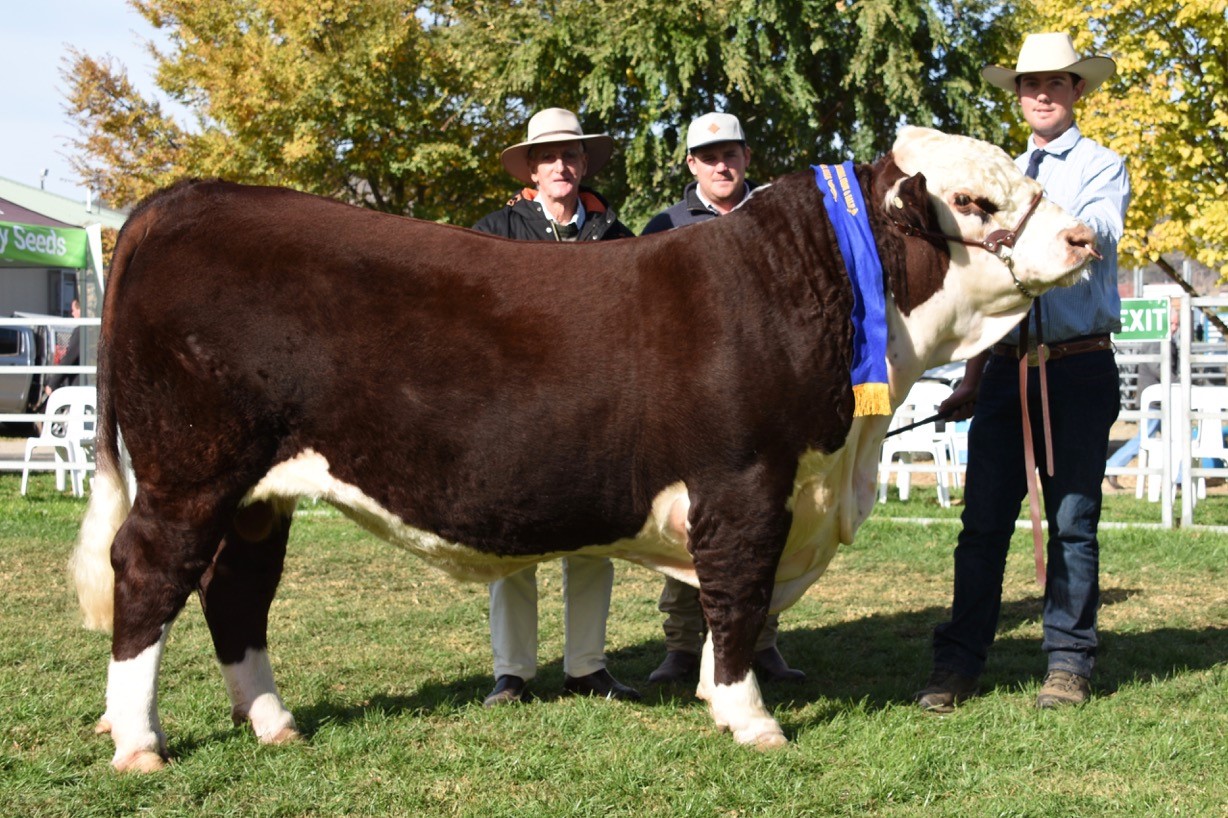