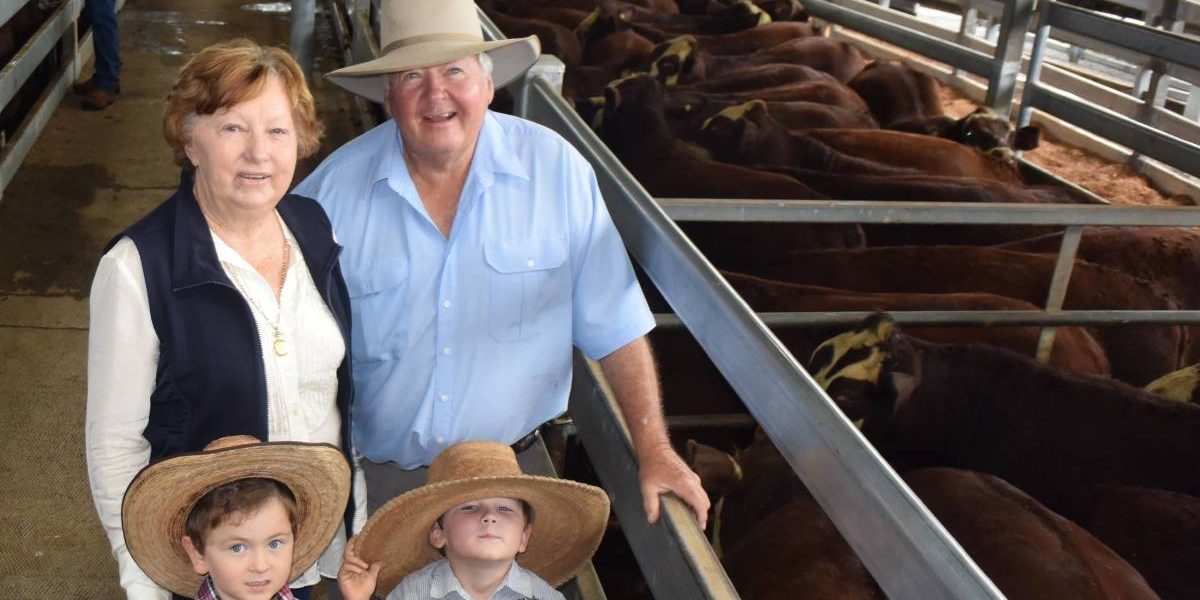 Santa Gertrudis/Hereford dominated the third day of weaner sales at Casino, during which a number of different Bos indicus over Hereford crosses created incredible excitement among buyers.

Two former dairy farmers and their families from Upper Tooloom set the market alight, with much of their progeny heading west to Bellata to the MacCue family feedlot, “Wilga”.

Champion pens of Santa Gertrudis/ Hereford went to John and his wife Maree who averaged $1124 for steers at 300kg and $14 more for their heifers. They sold their first lots of steers to Mike Benn “Sunnyvale”, Warwick for $1381 with best heifers selling to repeat buyers Glenn, Diana and Hugh Donnelly, “Blue Dog Agriculture” Irvington via Casino, who paid 365c/kg at 378kg or $1381 for calves 10 months old and will eventually put them to Angus bulls.

Jim and Jan Smith, Townview via Urbenville, topped the store sale with their pen of heifers, illustrating the strength of the market for the right breeders. They averaged $1060 at 291kg across all their females and topped at $1396 for 372kg.

Many heifers from the Smiths were bought by the Fuhrmann family.

Ian MacCue, “Wilga” Bellata said he was well pleased with the 239 head bought on Friday, through Bob Jamieson Agencies Inverell, with 177 going on feed after weaning and settling, with “Wilga” paying 327c/kg at 350kg or $1144.

Some 62 of those cattle, along with another 34 Charolais cross purchased the day before,  from the Smith, Somerville, Fuhrmann and Boland families will go into the Royal Agricultural Society feedlot trials at Wilga from early May for export lines and from early June for domestic. For those lighter cattle “Wilga” paid 334c/kg at 310kg or $1035.

Despite cattle selling for 50c/kg dearer than some centres this week, was satisfied with the long lines from single vendors and the quality and quiet that came with them.

Scott Humphreys, “Wellbatch”, Mummulgum, sold pens of Santa Gertrudis/ Hereford steers, weaned for six weeks, which averaged 304kg at $1027 and topped at $1199 for 354kg at 345c/kg, selling to repeat buyer Greg Upton, Walcha, who requires steers to step straight into his grass fed regime. The weaned cattle, very quiet, gained a 15c/kg premium on the day according to buyers. Yulgibar Station was a first time purchaser for Wellbatch.

First Cross Brahman/ Hereford commanded a following on the day, with heifers to 404c/kg at 226kg or $914 from Darryl Amos, Old Bonalbo, going to Peter and Rhonda Wright, Lawrence, who will grow them out and put them to Charolais. Mr Amos averaged 338c/kg at 250kg across all his F1 Brahman/ Hereford heifers.

Geoff Yates, Mummulgum, bought 160 steers and 85 heifers, Santa/ Hereford and Brahman/ Hereford, which will head to his father-in-law’s property “Naturi” at Condamine where he says the first cross does extremely well on grass.

Mr Drayton, who is re-building a fertile female line, also bid to 370c for a pen of beautiful Droughtmaster/ Hereford heifers from Ramtech Pastoral with Paul Fuhrmann, Mummulgum, the under bidder. Ian MacCue, “Wilga”, was the volume buyer on day three of the annual Casino weaner sales, seeking Santa gertrudis/ Hereford with his family’s Tookey Creek bloodlines for commercial production along with a few for next year’s RAS feedlot trial, which has proven a useful tool in the development of sensible cattle. Tweed cattlemen Gordon Quinn, Robert Brown and Ken Baker eyeing the spectacle of selling on the third and final day of Casino’s weaner sales, hosted by George and Fuhrmann. Santa Gertrudis/Hereford dominated the third day of weaner sales at Casino, during which a number of different Bos indicus over Hereford crosses created incredible excitement among buyers. The new selling pens at Casino were full of long lines, mainly Santa Gertrudis/ Hereford from the Smith families at Woodenbong and Urbenville, who have inspired the breeding of a new wave of suitable North Coast cattle.