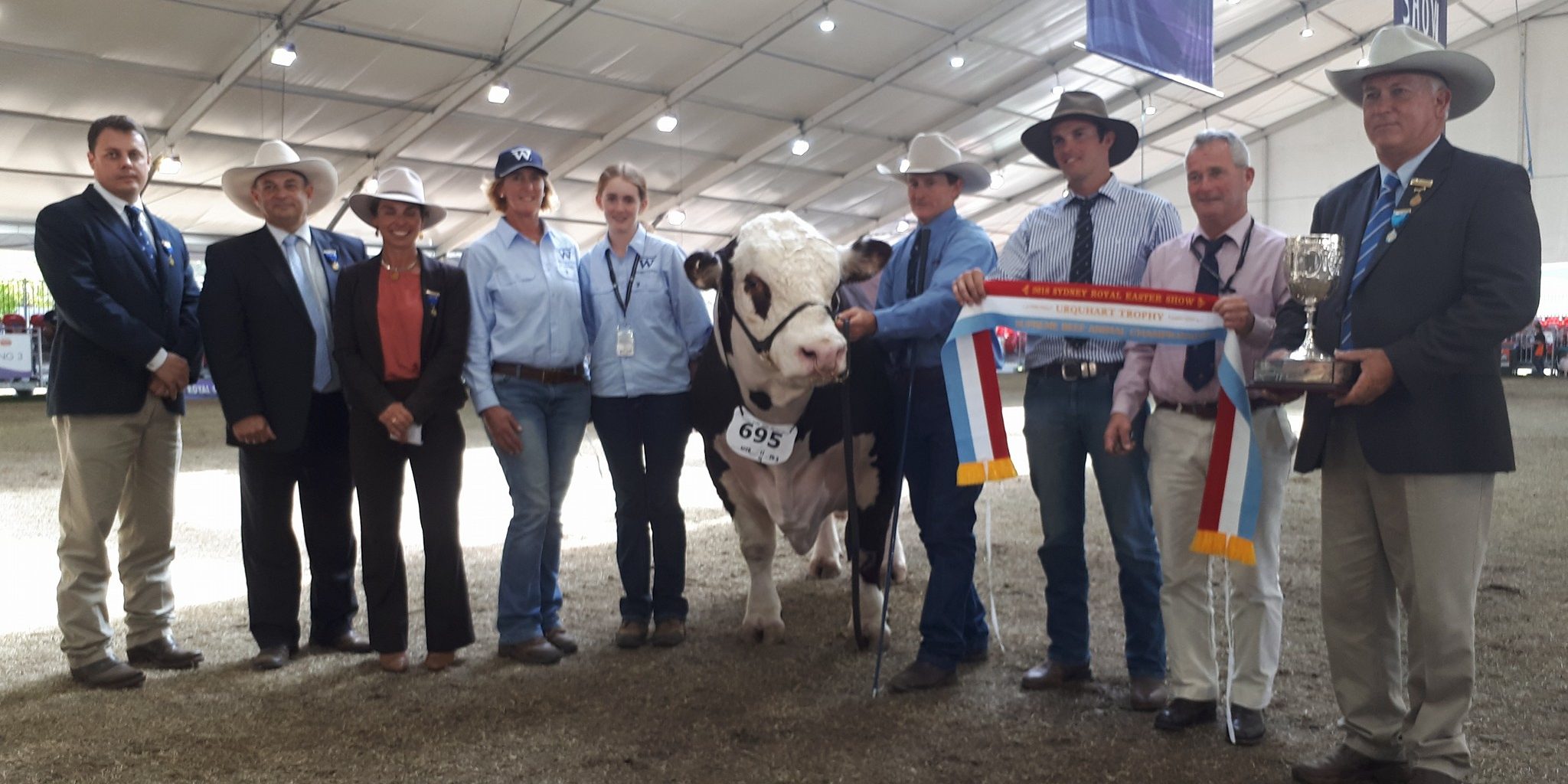 Following an impressive performance in the Hereford classes, the 21-month-old bull went on to impress all three judges of the Interbreed Competition:  Erica Halliday, Walcha, Gary Noller, Queensland, and PJ Budler from Fort Worth, Texas.

Mr Budler had previously expressed how pleased he was with Minnesota’s composition:

“There’s just so much muscle, power, function, and volume in this bull.” Mr Budler said.

Minnesota claimed the bull section of the Urquhart against the Angus and Speckle Park bulls before going on to take out the Supreme Beef Exhibit against the Interbreed Champion Female, Myanga Lady Louise L226, the Grand Champion Angus Female, exhibited by Scott Myers and the Beresford family, Moss Vale.

“It’s a massive thrill to have taken out Supreme Exhibit, it hasn’t quite sunk in yet!” Said Matt Kelley of their bull’s phenomenal success.

“You think you’ve got something good, but to get out there in front of world class judges and have them tell you you’re on the right track and that your bull is going to take the world by storm is pretty incredible.” Said Mr Kelley

Judge of the Interbreed Heifer class – Mr Selwyn Job, was impressed with the overall quality of the exhibits in the class but found that Kanimbla May best met his criteria.

“I thought she was a very complete female.” Said Mr Job.

Hereford Breeders fully supported being the feature breed at this year’s Royal Easter Show. This was evident with over 300 Hereford exhibits from 73 different studs across Australia.

“The results at this year’s Sydney Royal are a phenomenal achievement for our Hereford exhibitors who put so much time and effort into getting their livestock ready for the Sydney Royal.”

“Given that this year was the Hereford feature year, to have taken home two of the big Interbreed prizes is an outstanding result for our breed as a whole.” Said Herefords Australia General Manager, Andrew Donoghue.

Herefords Australia Chairman, Bill Kee was also thrilled with the Hereford success at the Sydney Royal.

“It’s been outstanding, not only for our breed, but all exhibitors, and the organising committee.” Said Mr Kee.

“These great achievements have generated interest, good will and excitement for our breed. It also instils confidence back into those people who have remained committed to our breed over many years.”

“Having the judges in Sydney say that the quality of our animals is worthy of anything in the world is a huge achievement, and a credit to the breeders and producers.”

“We hope now that we will be able to turn the success in Sydney into monetary value for both our stud and commercial breeders.” Said Mr Kee.