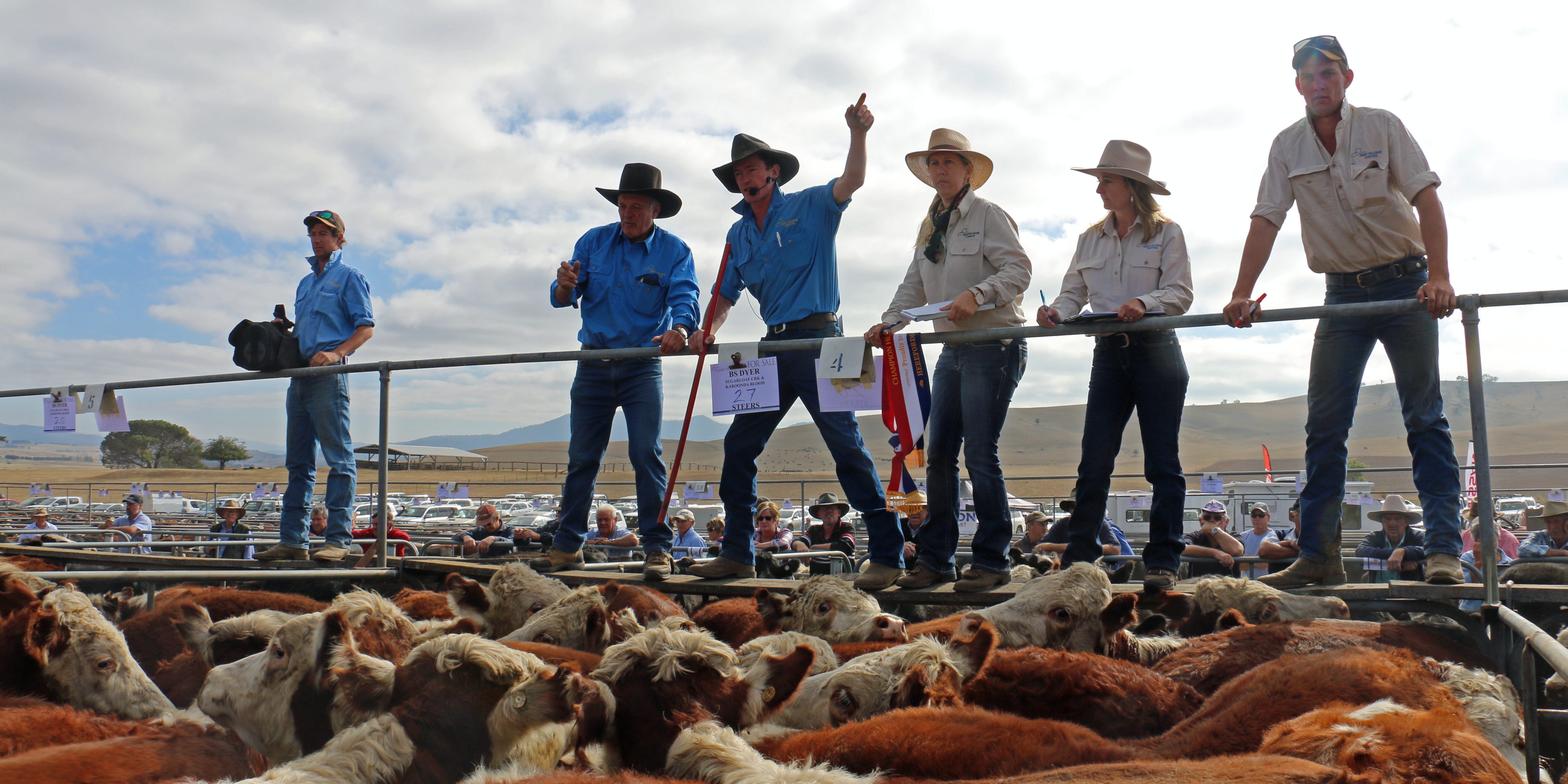 Hereford vendors pocketed an extra $50 a head for their steers above other British breeds in a stellar 78th annual Mountain Calf Sales this week.

The majority of calves had been weaned early and either supplemented or run on river flats.

Vendors agreed last year was an historic high unlikely to be repeated, and rounded their expectations down generally by $200-$300, or similar to 2016 prices.

But, a shortage of cattle combined with the low Australian dollar and widespread rain in northern Australia resulted in a moderate windfall for the Victorian high country producers at the two-day event.

Typical of those was one Victorian fattener who outlaid $1400 for Barry and Topsy Newcomen’s autumn drop steers in 2016, and sold them last June over-the-hooks to average $2508 at 776kg liveweight.

He was quick to reinvest, buying the opening pens at the Ensay sale for $1360 and $1260 to grass finish over winter.

Producers offered 509 more calves this year across the sales circuit, despite some vendors electing to sell earlier at the January weaner sales.

The whiteface offering hit its peak when 1143 Hereford and Hereford cross steers and heifers were sold at Ensay on March 14 for an overall average of $962.

This outpaced the steer average at the Omeo Angus sale on March 13 by $56 and the overall sale average by a stellar $85.

The overall average for the Elders Benambra Weaner Sale was $910, with steers averaging $975 and heifers $767.

Jim Pendergast, Penderscourt, Hinnomunjie, listed a green weight for this top pen of January-February drop steers at 459kg at the Benambra Calf Sale.

Barry Newcomen, Ensay, weighed a sample of the tops of the draft at the Ensay Weaner Sale to average 440kg. The pen sold for $1360 to return a curfewed price of 325c/kg.

The seconds weighed 395kg and returned a curfewed 330c/kg.

But, the vast majority of backgrounders had set their budgets on a dollars per head basis with the orders centering around lighter steers at $800-$900 and better quality types for lotfeeding at $950-$1050.

As Morgan Davies, Elders Bairnsdale, said, “throw the calculator away on the lighter cattle as it will scare you’’.

The Mountain Calf Sales are one of the few sales where large runs of European Union accredited whiteface cattle can be sourced.

And, it paid off with many lotfeeders competing strongly on the EU cattle and up to 500 – or almost half the yarding – remaining in the system at Ensay alone. Whiteface cattle tracked above other British breeds by an average of $56 during the 78th Annual Mountain Calf Sales.