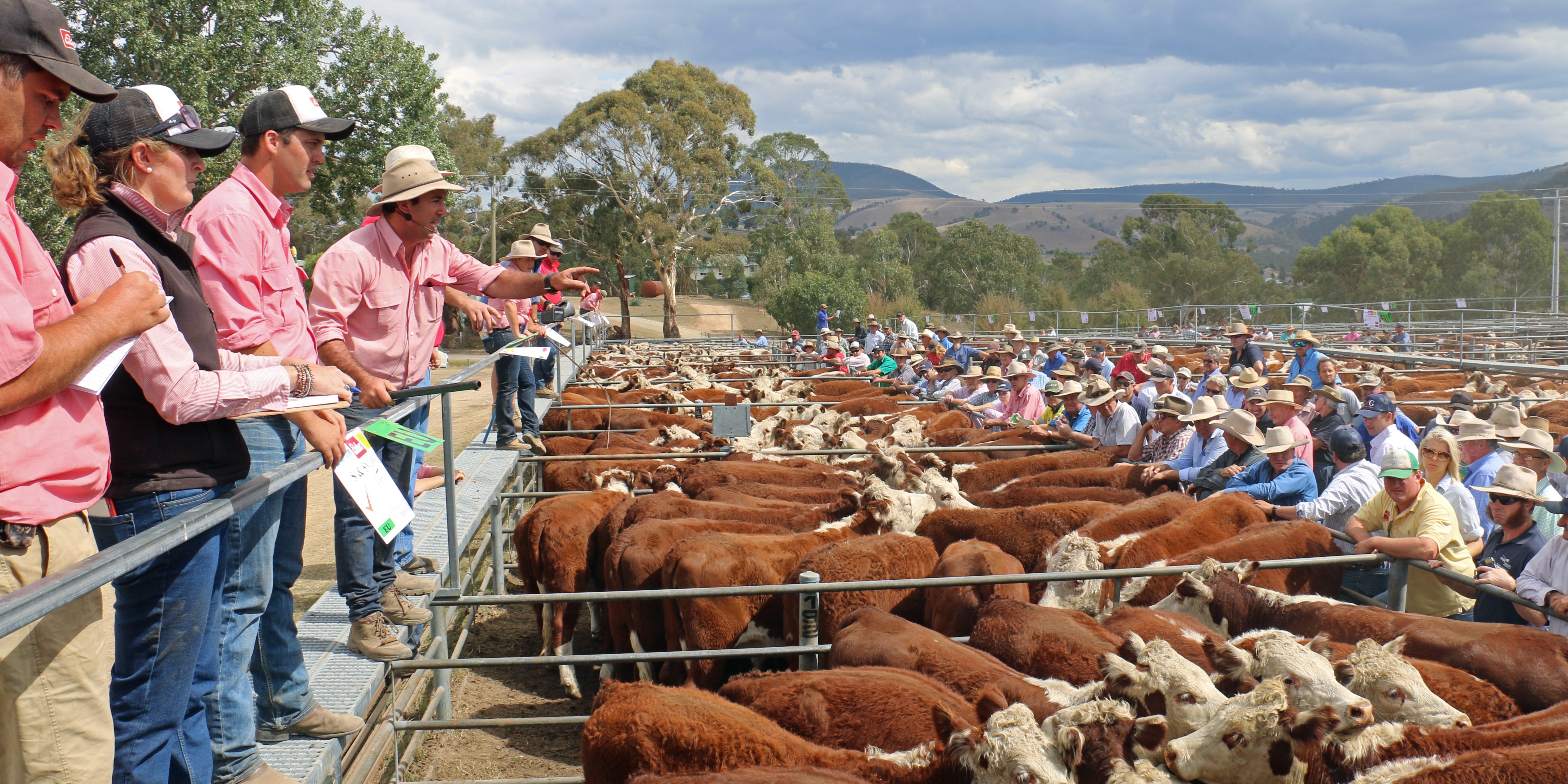 Buyers were met with one of the best line-ups of Hereford weaner calves in the nation for the 78th annual Omeo Weaner Calf sale on Wednesday, with steers hitting $1390.

The fixture finalised two days of selling where 7000 cattle were offered at Benambra, Ensay and Omeo.

The sale opened strongly with a pen of Yarram Park and Karoonda blood steers offered by Donald Betts, Bairnsdale, and ringing the bell for the top price of $1390.

The pace continued with the opening lane not dropping under $1100 due to the dominance of South Gippsland steer finisher Graeme Osborne and Princess Royal feedlot, Burra, SA.

Heifers were the big movers with prices up $70 on Ensay for purebred females to go back to the paddock for joining.

Morgan Davies, Elders Bairnsdale, said increased weight of the calves on offer at Omeo had elicited the higher prices.

“On the top end calves, a major EU lotfeeder bought a lot of cattle and repeat buyer Graeme Osborne stepped in to buy a big wing of Herefords to go into a bullock fattening operation,’’ he said.

“In comparison to Ensay, there was a bit more spark in it.

“A few heifers went back to the paddock – not as many as in the past – but the majority went into feeding or backgrounding operations.’’

“They were standouts for strength, depth and trueness to type,’’ Mr Elliott said.

Mr Faithfull also topped the heifer yarding with a pen of 19 selling at $1080.

“The calves were weaned late as the farm ran out of water after a tough season,’’ he said.

“I wound my expectations down $700 this year,’’ Mr Faithfull said.

“Clients sold bullocks (sourced as calves out of Omeo) for $2000-$2300 to processors – today it was about the quality of the cattle and the margin,’’ he said.

Ovens Valley restockers and steer finishers featured prominently among the buyers across the two days.

Stephen Street, Elders Myrtleford, picked up 430 head with the heifer portion destined for breeding herds at Myrtleford, Bobinwarrah and the Buckland valley.

“These Hereford cattle are noted to be strong gened, quality cattle – the sales have been solid and the cattle sold well considering the weather conditions,’’ Mr Street said.

“We were fortunate to have northern NSW and Queensland competition, strengthening the market.

“If you want good true to type Hereford cattle, this is where they are.’’

“You couldn’t fault these cattle and the breeders deserve what they got for them.’’

Among the contingent of Albury-Wodonga buyers was Noel Passalaqua and Dick Sloane, S & P Grazing, purchasing 100 steers and 200 heifers across the sales circuit through David Hill Livestock, Albury.

“The steers will be grass finished on river flats to an average of 620kg for Teys, Greenhams and Coles.

“The heifers will be joined in May and sold at the January special female sales in Wodonga.

“We were really happy with the quality of cattle we bought and with the prices – last year the heifers bought averaged $1030.’’

Mr Passalaqua also bought 90 steers for himself to average $994 for grass finishing.

Gillian Sanbrook, Bowna, NSW, was buying up to 600 whiteface cattle over the two days for her holistic grazing operation.

“I was looking for well bred, good value cattle and the vendors have done a wonderful job considering the season,’’ she said.

“They have fabulous bone and shape – they will be running on hilly country on the south west slopes.

“The Herefords finished off well last year and I couldn’t see a big difference between the breeds.

Bert Ah Sam, Omeo, has been selling at the yards for over 50 years and described the sale as “very solid for the conditions.’’

He had expected his EU accredited Shorthorn/Hereford heifers to make $900 but they sold just shy at $890 while the steer portion topped the roan baldy offering at $1190.

Alan Smith and his daughter Belinda, of Omeo, offered 41 Shorthorn/Hereford steers and 34 heifers, May-June drop, after topping at $1020 with their Angus steers on the Tuesday.

The cattle had been weaned in January onto silage and fodder crops, with the top steers weighing around 400kg and snapped up by Princess Royal feedlot for $1160.

“The sale is not as tough as I thought it was going to be – the calves are not as heavy as last year so the huge prices reflected the quality of the cattle last year,’’ Mr Lawlor said.

“I love what I can do with this breed – if you buy better genetics and feed them they will reward you.’’ Simon and Sonya Lawlor, with son Jason Lawlor and Bill Flannagan, Omeo. The family offered 100 steers, April-May drop, to a top of $1130. Jim Flannagan, Omeo, has seen more sales than most and this year sold his Hereford steer weaners to $1080. Bert Ah Sam, Omeo, has been selling at Omeo for over 50 years, and sold Shorthorn-Hereford heifers to a top of $890 and steers to $1190 this year.