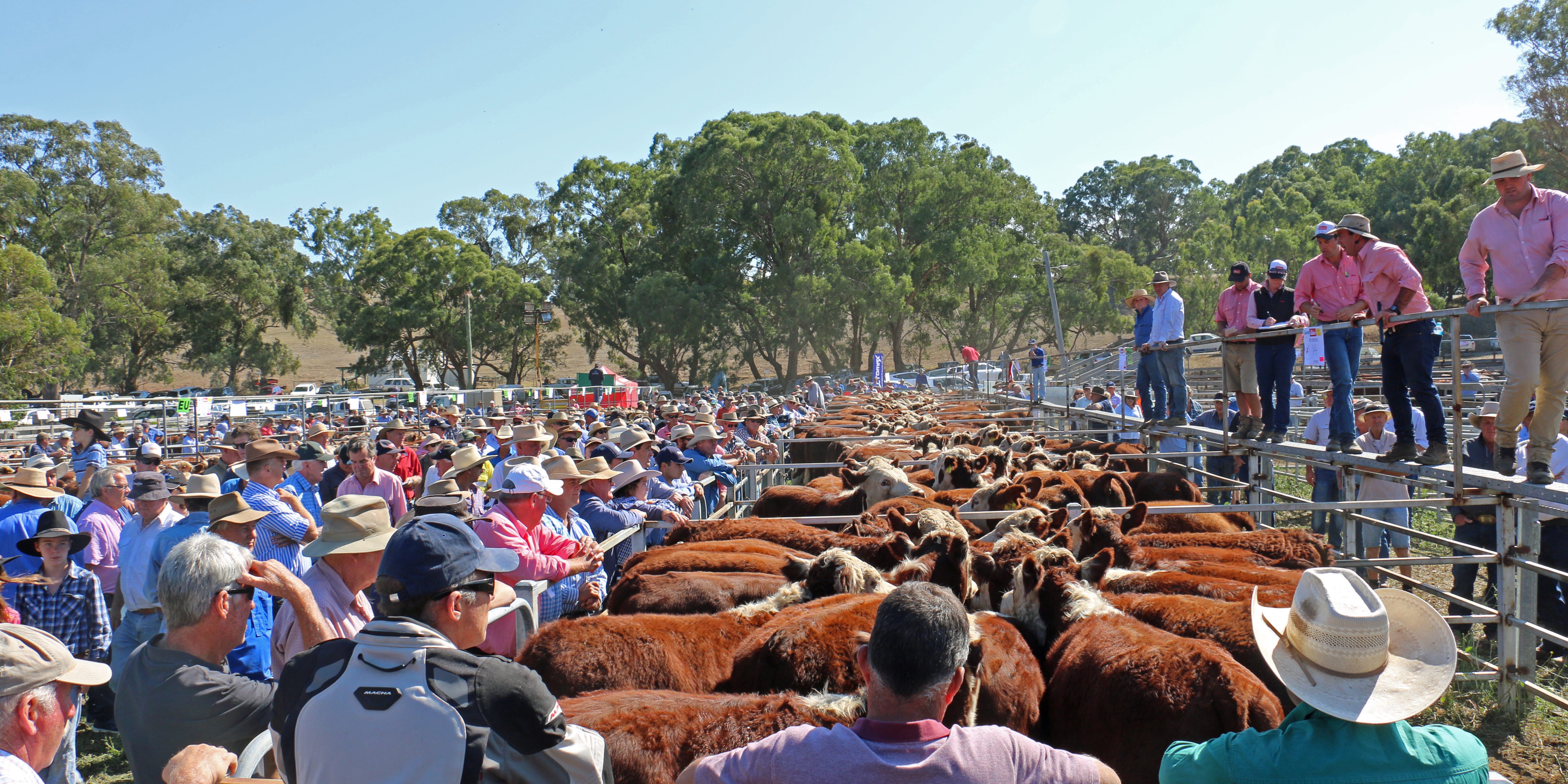 Bidding stepped up a gear on the second day of the 78th annual Mountain Calf Sales to push prices up by $160 for autumn drop Hereford steer weaners at Ensay.

Selling agents Elders yarded 1300 Hereford and Hereford-cross yearling and weaner steers and heifers for the sale on March 14.

The sale featured a strong line-up of European Union cattle attracting major feedlots, including South Australia’s Princess Royal, with up to 500 head remaining in the system.

Prices were unable to match last year’s out-the-box result but vendors had rounded down their expected averages by $200.

Prices in the opening lane of steers did not dip below $1100 as backgrounders, steer finishers and lot feeders jockeyed for lines of the vendor bred calves.

“The vendors put a lot of effort into the genetics and breeding, and they get the response from repeat buyers stepping in,’’ Mr Davies said.

“Buyers spending $900 got a good Hereford calf and could throw the calculator away,’’ Mr Davies said.

“The top heifers were bought for $1050 to rejoin while a few bigger, heavier heifers went to feeders and made market rates of 250-270c/kg.’’

“They were a standout for frame and growth – they are virtually little bullocks already,’’ he said.

The Lloyds had offered 61 steers and 17 heifers, all weaned in early December onto silage and hay, and had anticipated a price drop of $200 on last year after a dry winter.

“The breed’s temperament and doing ability does the job in this country,’’ Mr Lloyd said.

Ringing the bell with the top price of $1360 was Barry and Topsy Newcomen, Ensay.

The March-April drop steers had a green weight of 440kg to give an estimated liveweight price of 325c/kg.

Their draft of 110 steers and 80 heifers had been early weaned in October – three months ahead of schedule due to drought.

“They were fed hay and cubes with the weights up on last year,’’ Mr Newcomen said.

He said vendors were encouraged to use the Tambo Valley Producers Group yellow eartags to distinguish their cattle as a premium product.

Mr Newcomen said feedback on his cattle had revealed the steers bought at Ensay in 2016 for $1400 were sold last June over-the-hooks to average $2508 at 776kg liveweight.

“The top price today was only $40 less than two years ago – last year was an exceptional year,’’ he said.

“It was a good solid sale with quality cattle and a lot of buyers here.’’

Reece and Wendy Newcomen, Ensay, offered a draft of 120 steers and 36 heifers, April/May drop, and weaned in February.

Their steer average was down $220 on last year.

“We are happy to see the back of them as it has been an incredibly tough year,’’ Reece said.

One of the biggest volume vendors were Evan and Dot Newcomen, Ensay, with 157 steers and 80 heifers, April-May drop, and weaned in November.

Evan said the calves had been fed “all their lives’’ due to the dry conditions, and had anticipated prices to fall to 2015 levels.

Her top pen of steer weaners sold to Princess Royal feedlot for $1180.

The Grays 43 April-May drop steers and 13 heifers had been weaned three months ago onto silage and cubes, with the top steers weighing over 400kg.

“I had no idea what the prices would be like and just decided to run with the market,’’ Mrs Gray said. Barry Newcomen, Ensay, was pleased to sell his top pen at $1360 or 325c/kg to repeat client and steer finisher Arthur Angliss, Romsey. Wendy and Reece Newcomen, Ensay, sold their draft of Newcomen blood, autumn drop steers to a top of $1110 at the Ensay Weaner Sale. Buyers paid to a top of $1360 for autumn drop Hereford steer weaners – a rise of $160 on the previous day’s Elders sale at Benambra. The Elders team sell the Herefords Australia champion pen for $1190. Auctioneer Morgan Davies knocks down a pen of Hereford and Shorthorn/Hereford steers for $1090 to Ian Lester, King Island.