Hereford Heifers Head to the Beach for a Great Cause 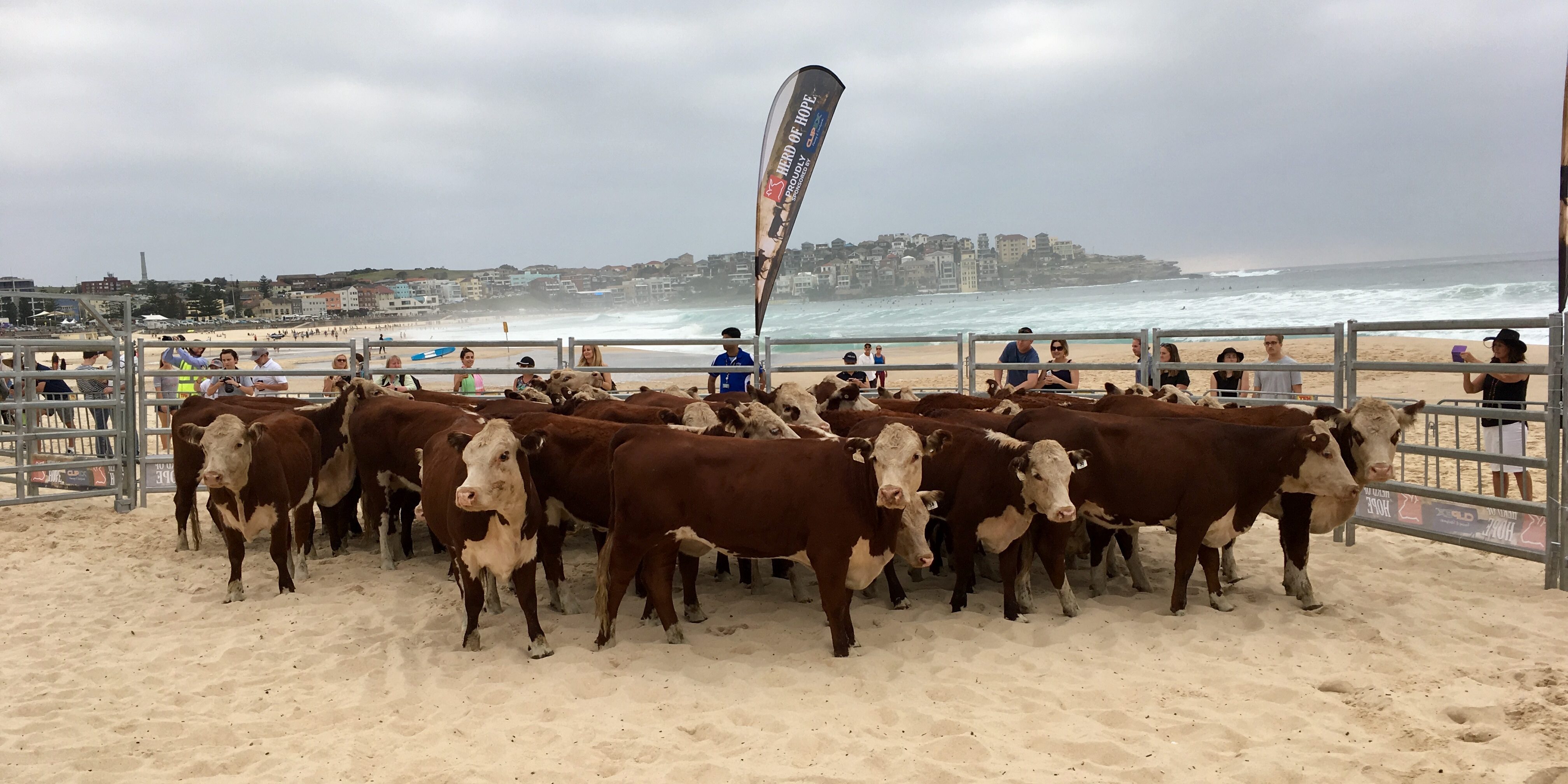 On Saturday the 17th of March an unusual event took place on Sydney’s iconic Bondi Beach.

A herd of 40 Hereford heifers all the way from Undoolya Station in Alice Springs arrived on the white sand to raise awareness for organ and tissue donation and the need for medical facilities in rural Australia.

The aptly named “Herd of Hope” has been the inspiring idea of Megan McLoughlin, who has experienced firsthand the lifesaving impact of organ donation.

Megan was born with only one kidney, and as a child developed type one diabetes. Come 2010, Megan was on dialysis with only weeks left to live. For a second chance at life Megan required a double transplant; a new kidney and a new pancreas. A successful double transplant in December 2010 saved Megan’s life. She has since married and has two young children Sam and Ella, who were both at the Herd of Hope event.

“While I was waiting for my transplant I always believed hope was stronger than fear.” Said Megan, and this was the inspiration for the name of the event.

The event drew a huge crowd along the promenade, who were treated to a once in a lifetime sight of not only cattle, but stockmen on horseback on the sands of Bondi.

Megan’s father, Jim Willoughby provided a horsemanship demonstration which wowed the Sydney audience, while The Crackup Sisters from Winton, QLD provided a light-hearted and colourful performance for the young and young at heart at the event.

The famed docility of the Hereford breed was clearly on display, with many people at the event impressed by how calm the 40 heifers remained during the entire event, despite being in a totally foreign environment.

The event was run entirely by volunteers, with all the “Bondi Buddies” having some connection to the organ donation process. Some of the volunteers were from donor families, who had gone through the harrowing experience of losing someone and making the amazing decision to donate their loved one’s organs. Others had received the lifesaving gift of new organs or were loved ones of an organ recipient.

Some of these stories and experiences of organ donation were shared with the audience at the Herd of Hope and really brought home the message this amazing initiative is trying to share.

The Herd of Hope is aiming to raise awareness and encourage more Australians to register to become organ donors, as currently only 20 of every million Australians are on the organ donor register.

One donor has the potential to help save up to ten people, but of the 76,577 deaths in hospitals in Australia in 2016, only 503 of these people became organ & tissue donors.

Approximately 1,400 Australians wait for a life-saving transplant every year, and while Australia has one of the highest rates of organ transplant success in the world, people still die each year waiting for the second chance at life that organ donation offers.

Around 1 in 3 organ and tissue recipients live in rural and regional Australia, and this provides its own set of challenges, as all transplants are performed in tertiary hospitals in major cities. Transplant surgery is also time critical – for example a heart recipient has only 6 hours to get to hospital.

The Herd of Hope heifers will now be retained as a breeding herd, and while no further events are planned for the immediate future, the Herd of Hope team plan to continue their work with their 40 Hereford heifers and raise further awareness of the Herd’s amazing cause.

For more information on this amazing event, including donation/sponsorship options, visit the Herd of Hope website HERE.

For more information on organ donation or to register to become an organ donor, visit Donate Life HERE. The herd of 40 Hereford heifers were trucked to Bondi Beach to make their public debut. The team of Herd of Hope stockmen and women drove the cattle up the beach in front of a large crowd of onlookers. The Hereford heifers from Undoolya Station in Alice Springs were very calm throughout the entire event. The team on horseback demonstrated traditional cattle droving along the white sands of Bondi Beach. The Herd of Hope heifers are the first cattle to ever be allowed on the iconic Bondi Beach. The Crackup Sisters from Winton, QLD kept the audience entertained with their colourful performances.