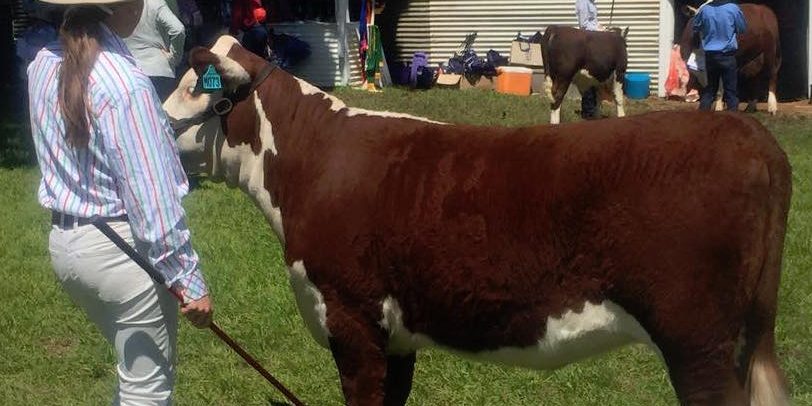 This year’s Dorrigo Show held on the 25th and 26th of November, proved to be a very successful affair for a team of Te-Angie Hereford heifers and their PLC handlers.

Second place in the the Interbreed pair of Heifers class was also awarded to the PLC/Te-Angie team with Te-Angie Innovation and Te-Angie Silver.

This is a fantastic result for the young team of heifers and handlers given the relatively short period of time the students had to prepare their cattle.

“We picked the heifers out from Te-Angie on November 12th so to have them fully broken in and at Dorrigo show is an amazing effort for our cattle Team at PLC.” Said PLC Cattle Team manager Briony Looker.

Next on the calendar for the PLC students is the Herefords Northern NSW Youth Camp in January 2018, which they will be attending with their Te-Angie heifers.

Greg Tyler of Hillview Herefords, Tyringham, also had a great deal of success at Dorrigo show with Hillview Marshall MO7 winning the 16 to 20 months class and going on to be named Grand Champion Hereford Bull.

Hillview Elsie l41 won her 20 to 24 months class to then go on to be awarded Grand Champion Hereford Female and also Supreme Hereford Exhibit.

Other Hereford successes at this year’s Dorrigo Show included:

The Cheers family won the 24 to 30 months class and the 30 months and over class.