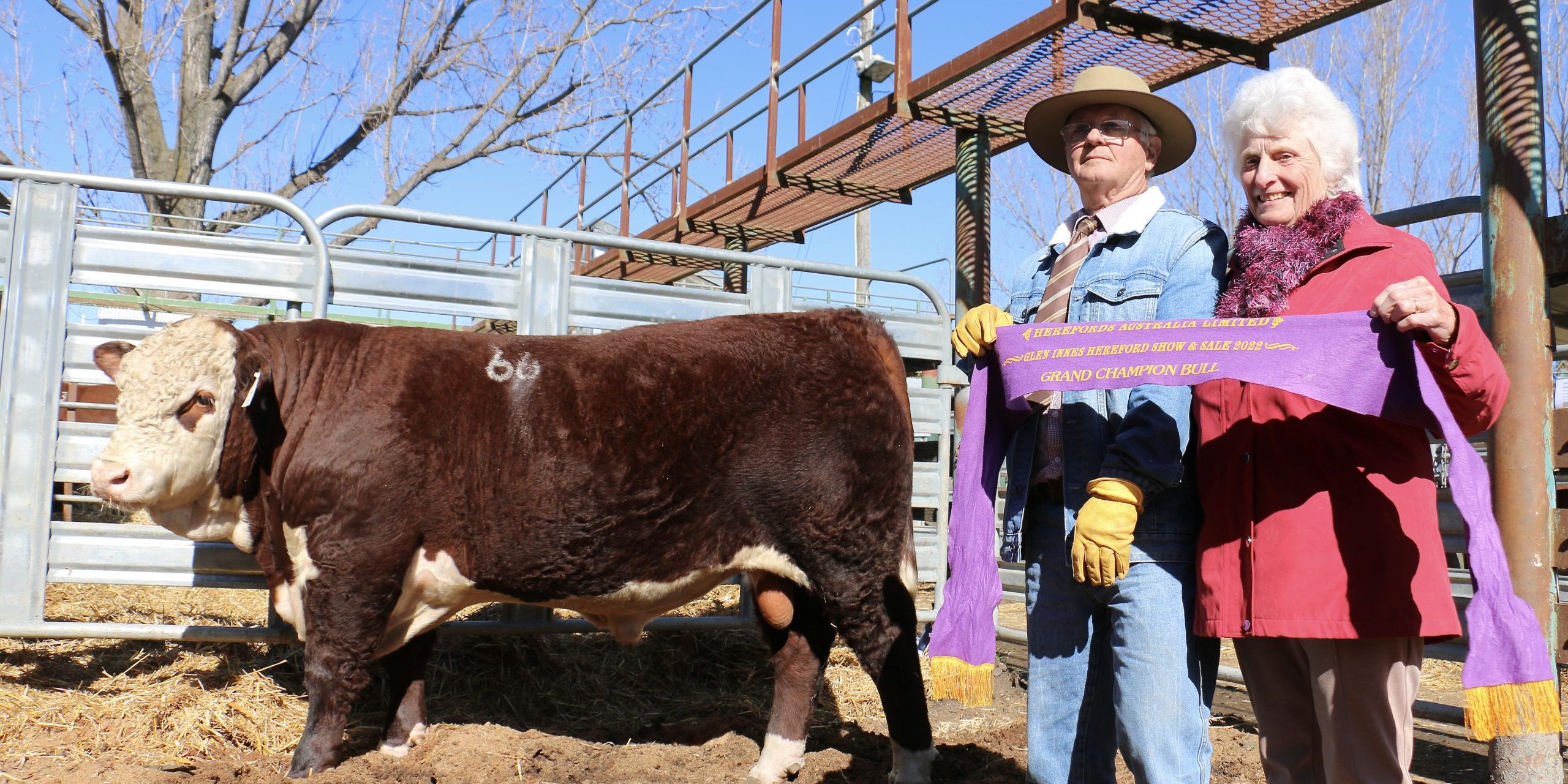 Held at the Glen Innes saleyards on 29 July, the multi-vendor sale offered junior and senior bulls plus pregnancy-tested-in-calf heifers from 18 existing, new and returning vendors, and drew 100 registered bidders plus AuctionPlus buyers.

On BREEDPLAN, the bull had estimated breeding values (EBVs) of +4.9sqcm for eye muscle area and +98kg for 600-day weight.

Rocky had been judged as the champion yardman’s pick by Andrew McIntyre, Pinkett, and Ben Wirth, Glen Elgin.

Mr Hardcastle, who breeds commercial bulls, was impressed with the sire’s length and carcase.

This year, he sold 21 bulls into Hereford and crossbred herds in northern NSW for an average of $9800 while his steers are sold as weaners into Casino store markets.

“Our heifers are in demand from producers with crossbred systems,” Mr Hardcastle said.

The 24-month-old bull weighed 995kg, had a raw eye muscle scan of 126sqcm, scrotal circumference of 44cm and average daily gain of 1.36kg.

“I was looking at their feet and frame – he will go across straightbred cows,” he said.

Mr Dean grows out steers and heifers to 24 months of age for the grass-fed processor market at Teys, Greenhams, AMG and JBS.

“I like the Hereford temperament and they do suit our higher altitude climate.”

Sired by Courallie J L217 Advance P058, the 19-month-old bull weighed 730kg and combined a moderate birthweight with an eye muscle EBV of +5.7sqcm and intramuscular fat of 1.1 per cent.

In the females, the top price of $7000 was paid by Steve and Therese Crowley, Tycolah Poll Herefords, Cobbadah, NSW, for 20-month-old Dundee Lustre 303 R284, a 475kg daughter of Courallie Kodiak K592 and joined to Battalion Boston, from vendor Roger Kneipp, Dundee.

Mr Kneipp is scaling down his breeding herd and plans to offer PTIC females at next year’s Glen Innes sale.

Steve Crowley said the heifer was a beautiful shape, square and with feminity and outcross bloodlines.

“We will calve her down and join her to a homozygous polled bull,” he said.

The sale was officially opened by Herefords Australia Chief Executive Officer Lisa Sharp, saying it was wonderful to see returned and new studs to ensure the continuation of the event.

There was a one minute’s silence to mark the passing of legendary stud stock auctioneer Kevin Norris and long-time breeder Neville Farrawell, Bonnie Brae Herefords, Tamworth,

“The females sold very well – it gets genetics out and about, and Roger Kneipp will have a few more next year,” he said.

“The event will remain at this venue for as long as we are allowed to stay.”

Elders stud stock auctioneer Lincoln McKinlay said there was emphasis on big data bulls from buyers, along with bulls mid-way in their preparation.

“The quality of the bulls here today was really good as a whole with a good crowd, and most vendors had new and returning clients,” he said.

“The strength in the females continued to show how the industry is still trying to rebuild female numbers, and they continue to make a premium.”

Check out the gallery for all the photos from the sale.