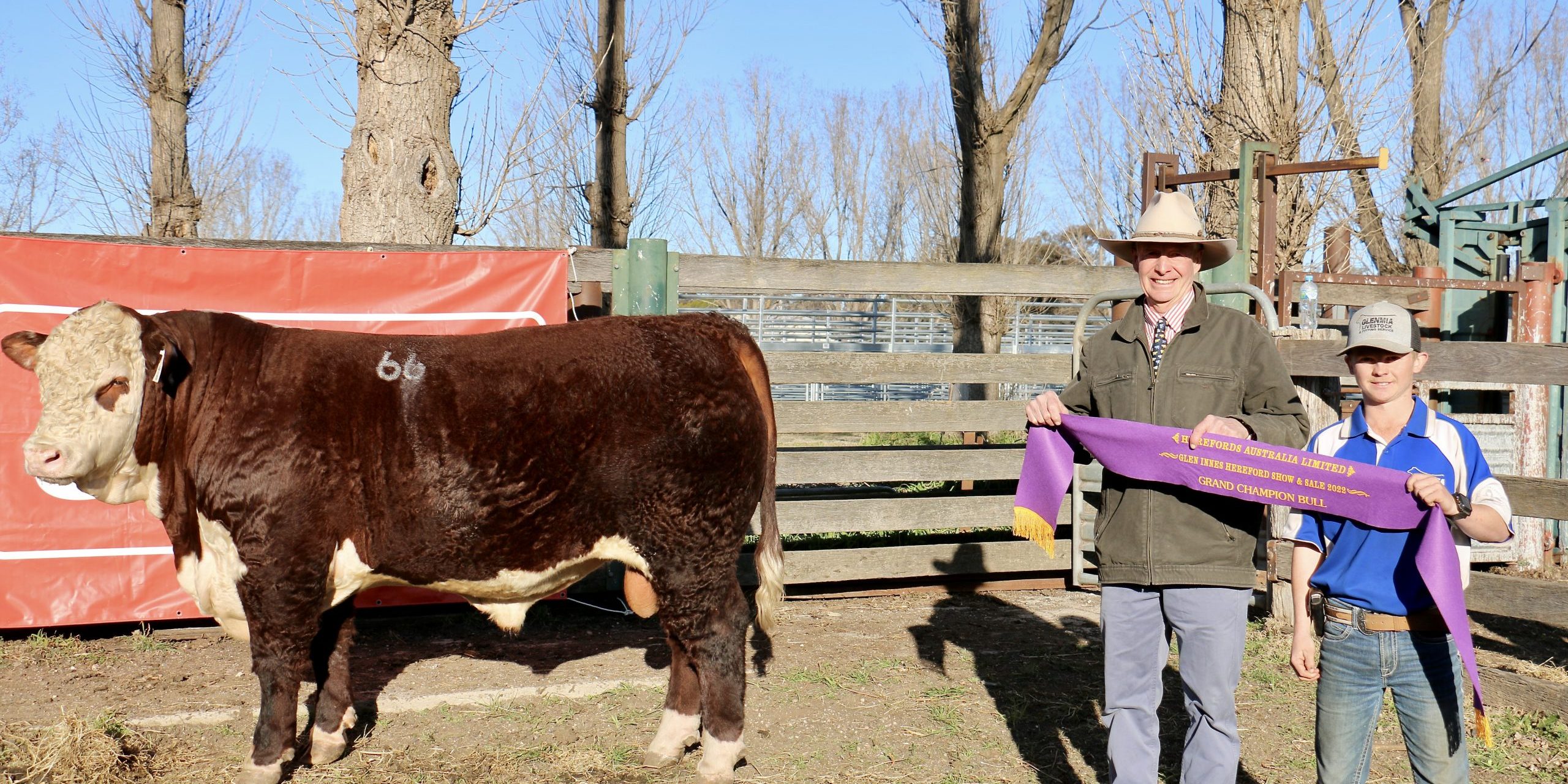 A homebred sire from a vendor returning to the fold at the 77th Glen Innes Hereford Bull Show and Sale stole the limelight as grand champion bull.

The bull was bred by Dr Phil and Lyle Yantsch, Willgoose Herefords, Toowoomba, Qld, and was sired by Willgoose Beersheeba N027 and out of Willgoose Lady Merit M140.

Weighing 825kg, Detour had a raw eye muscle scan of 128sqcm, fat depths of 13 and 10mm, a scrotal circumference of 42cm and average daily weight gain of 1.38kg.

Willgoose Detour had risen to the top in an exceptionally strong class of 18 entries in the junior bulls.

It was a long time between drinks for the Willgoose stud with the last grand champion in 1984, Willgoose Graduate bought by the late Kerry Packer.

Mr Upton said the champion pen had tremendous weight for age, length from shoulder to pins and were the “most powerful and even”.

Mr Upton described the Wendouree entries as well balanced, structurally sound and a good representation of the Hereford breed with muscle and carcase.

“It’s about breeding beef today and as many kilograms as we can, and there is a lot of power in these three bulls.”

Mr Upton described the Ownaview bulls as very even and beautifully set in their shoulders, with adequate muscle, great top and good hindquarters.

Year 12 student, Lachlan Bacon, said the pen comprised two brothers by Wararba Park Nambour, which the two young studmasters bought as a calf on his dam.

This was the second Glen Innes Show and Sale for Lachlan and Riley, a Year 9 student at Assumption College, with their bull teams.

The pair run 50 registered cows, have sold bulls into stud and commercial herds from Tasmania to Queensland, and aim to establish their own on-property sale.

“We aim to breed big, even, well-structured bulls to go out into commercial herds,” Lachlan said.

Coming from a dairy background, the eighteen-year-old paid tribute to the Herefords Australia Youth movement for teaching them leadership, showing and public speaking skills.

His interest in the breed was generated by a gift of a Hereford heifer when he was 12.

Mr Upton said S002 had the length, depth and a great top line.

Runner-up in the junior bull class to the grand champion was Thornleigh Rackemann R264, exhibited by Thornleigh Herefords.

Phil and Brad Thomas, Kylandee, exhibited the intermediate champion, Kylandee Rocky, a 1040kg son of WRL Lancelot and out of Kylandee Sunbeam L011, and described by the judge as a “big, long, powerful bull”.

Phil Thomas believed Rocky was the best bull the stud had ever bred with carcase, weight, structural soundness, skin, eye pigment and length.

“WRL Lancelot is the sire of all six of our bulls here and he has bred exceptionally well for us,” he said.

Runner-up in the intermediate class was Wendouree Reuben R008, a son of Mountain valley Netflix N011.

Due to an injury, Jane Leake, Bahreenah Poll Herefords, Tingah, was unable to see her bull, Bahreenah Rabbani, win the senior bull class.

The May 2020 drop bull was sired by Morganvale Majestic and out of Bahreenah Martina, and had BREEDPLAN estimated breeding values of +4.7kg for birthweight, +31kg for 200 day weight, and +3.1sqcm for eye muscle area.

Mr Upton said Rabbani showed length and has “a terrific top that follows all the way down through the hindquarter and stifle.”

“He is just a powerhouse bull and is a real herd improver.”

Sewlyn and Val Weller, Welray Partnership, have bred Herefords for 45 years and returned after several years of private treaty sales.

“We felt we had two bulls of enough quality to come back to Glen Innes – we usually do the Kempsey and Forster bull sales,” Val said.

“Most of our bulls go into straight bred and crossbred herds.”

The couple run 50 registered females on their 60 hectare property and have entered four animals for the 2022 Royal Brisbane Show.

Selwyn began working for Hereford producers when he left school and fell in love with the breed. He went on to show cattle at Sydney Royal for 54 consecutive years.

“The Hereford temperament is the best of all the breeds and I have shown a lot of breeds with my fitting service – one year we took 54 head to Sydney in nine breeds,” he said.

Check out the gallery for all the images.