Vendors were left open mouthed as buyers kicked up a gear at the Ensay Weaner Sale and lifted autumn drop steer prices by $130 on the Benambra Weaner Sale to top at $2780.

Selling agents Elders Bairnsdale yarded 662 steers and 303 heifers for the March 9 fixture at the Ensay yards in challenging conditions after 100mm fell in the days preceding the sale.

Pat Cleary, ECM Livestock, judged the champion pen and awarded it to Phillip “Bluey” Commins, Nunniong Herefords, Ensay, for his 19 steers, which also received the Tony Pianto Pen of the Sale award from Elders.

Sired by homebred bulls and out of first calf heifers, the July/August drop steers sold to a Warragul steer finisher for $2390.

Bluey, who offered 150 steers and 67 heifers, came to the aid of the large crowd by rolling out a bale of hay to counteract conditions that was described by Morgan Davies, Elders, as “hard going on man and beast”.

Topping the sale and creating a new record top steer price for the yards was Barry and Topsy Newcomen, Newcomen Herefords, Ensay, with their pen of 21 EU accredited Herefords, with a green weight of 428kg, and snapped up by repeat client Arthur Angliss, Lancefield, for $2780 (649c/kg).

Mr Angliss also paid $2560 for a pen of 21 EU Hereford and Shorthorn/Hereford steers from Evan and Di Newcomen, Ensay.

He finishes Herefords for the JBS grass fed programs and likes to buy them at 400kg liveweight.

“We had four years of drought and that knocked a hole in the bank balance but this will restore it. Last year was good and this is even better,” he said.

In the females, a new saleyard record was set at $2610 for a pen of 22 EU accredited Shorthorn/Hereford heifers sold by Evan and Di Newcomen to restocker Greg Pritchard, Tallangatta, Vic.

“We are restocking – our budget was exceeded but that is the cattle job at the moment,” Mr Pritchard said.

“You would never find a better pen of roan heifers anywhere. The F1 females are so easy to look after.”

Morgan Davies, Elders Bairnsdale, described the sale as a “fantastic result for not only the vendors but the buyers who keep coming back to buy these cattle.”

“There was a new record set for the yards and we are seeing them broken all the time but that’s just where the cattle market is.” 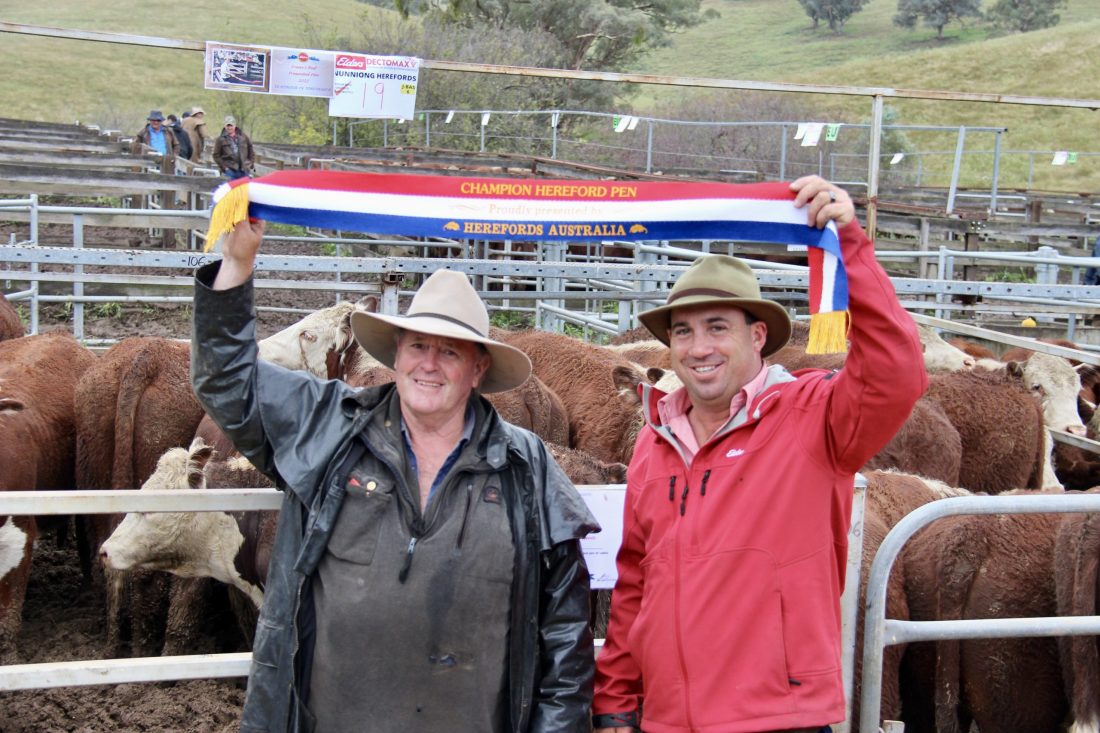 Phillip “Bluey” Commins and Morgan Davies, Elders Bairnsdale, with the champion pen of steers which sold for $2390 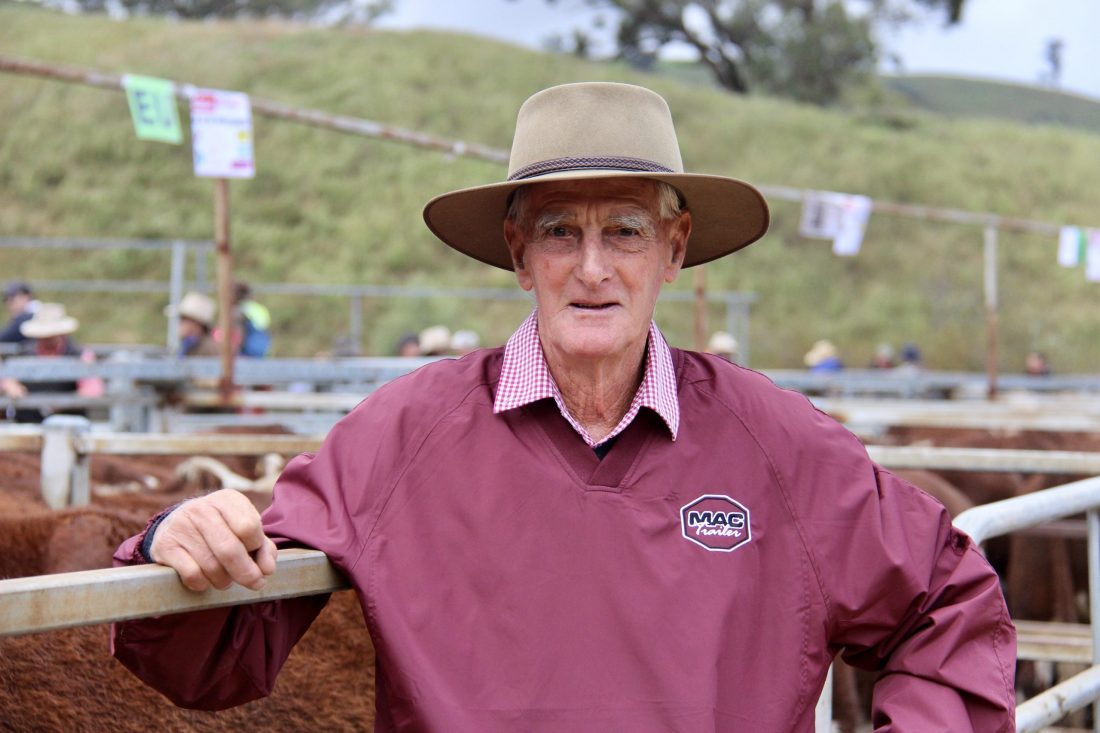 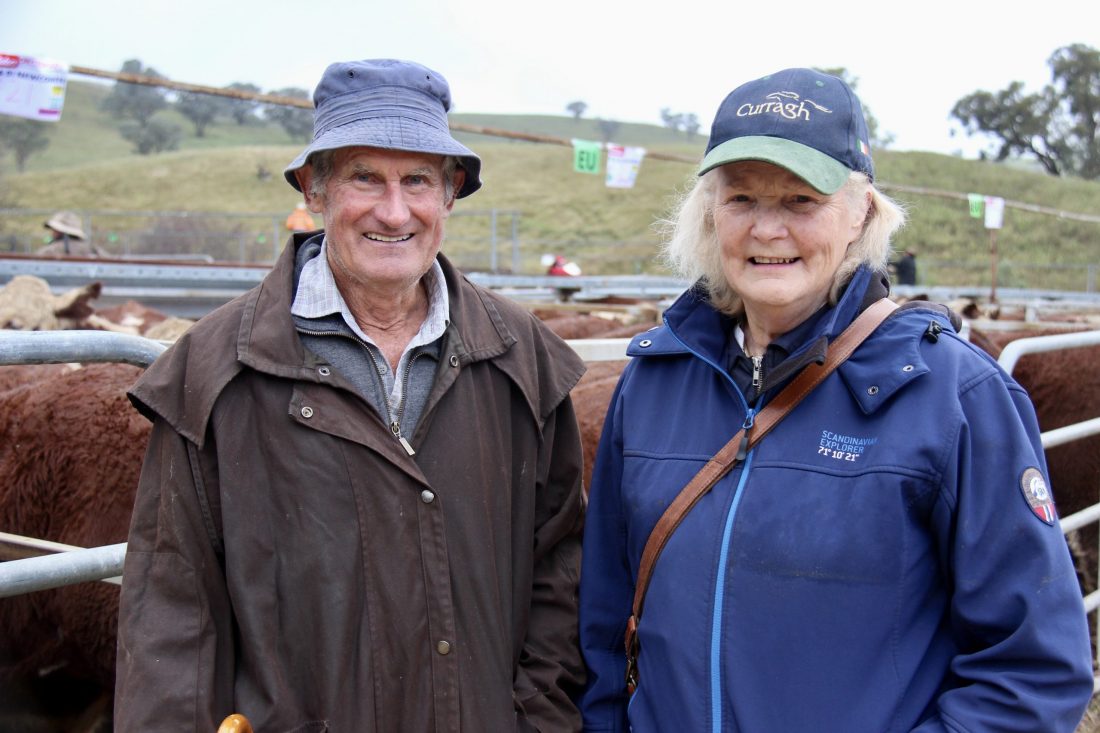 Lynn and Pam Vearing, Glen Goulburn Poll Herefords, Whittlesea, were among the crowd at Ensay. They have relocated their stud to Glen Burn Station in February after a family history of almost 100 years at Epping 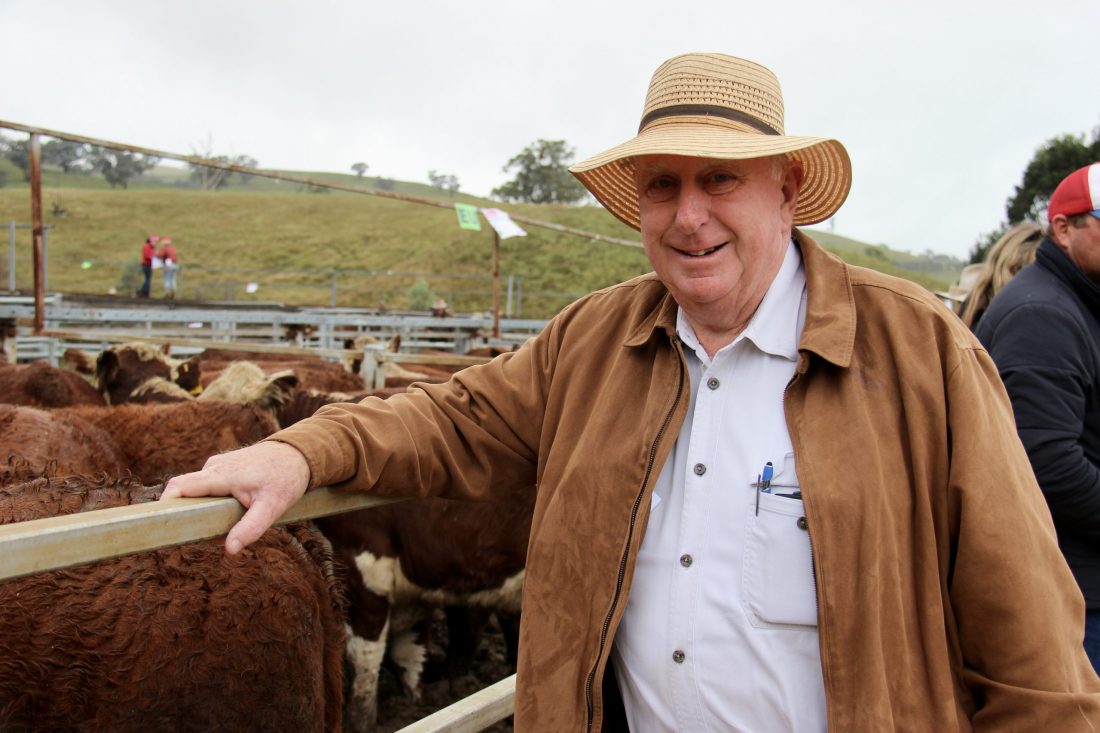 Arthur Angliss, Lancefield, outlaid to a top of $2780 for autumn drop steers for grass fed programs. 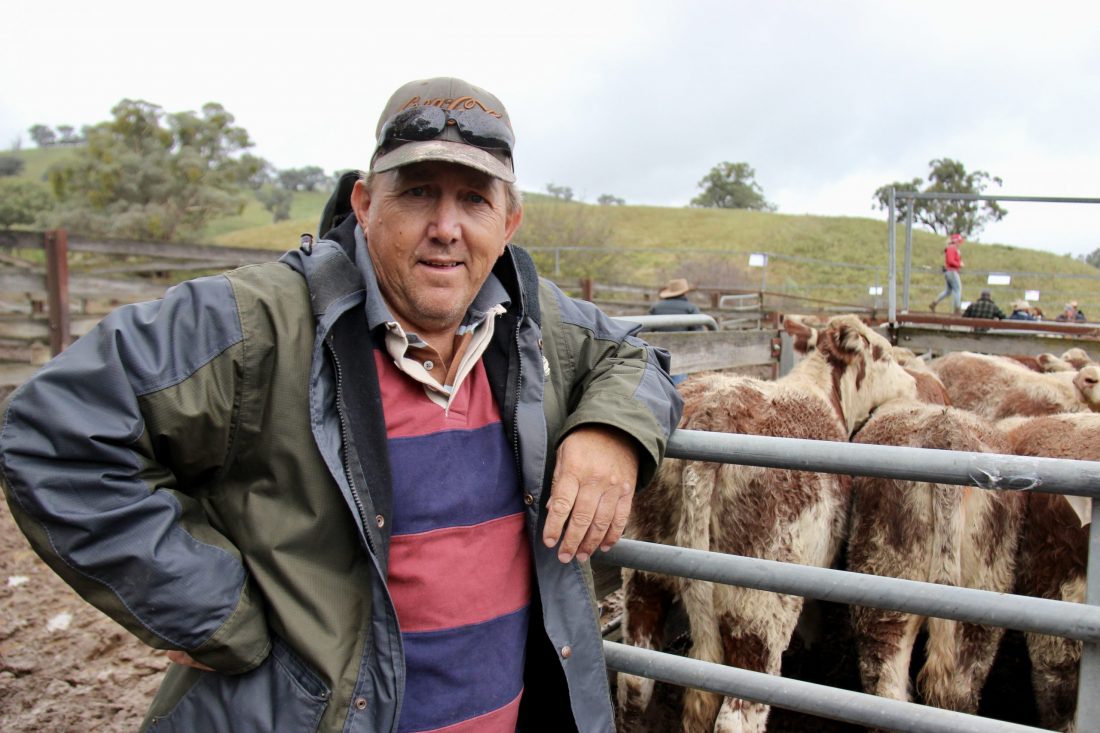 Greg Pritchard, Tallangatta, paid $2610 for this pen of 22 Shorthorn/Hereford heifers from Evan and Di Newcomen, Ensay 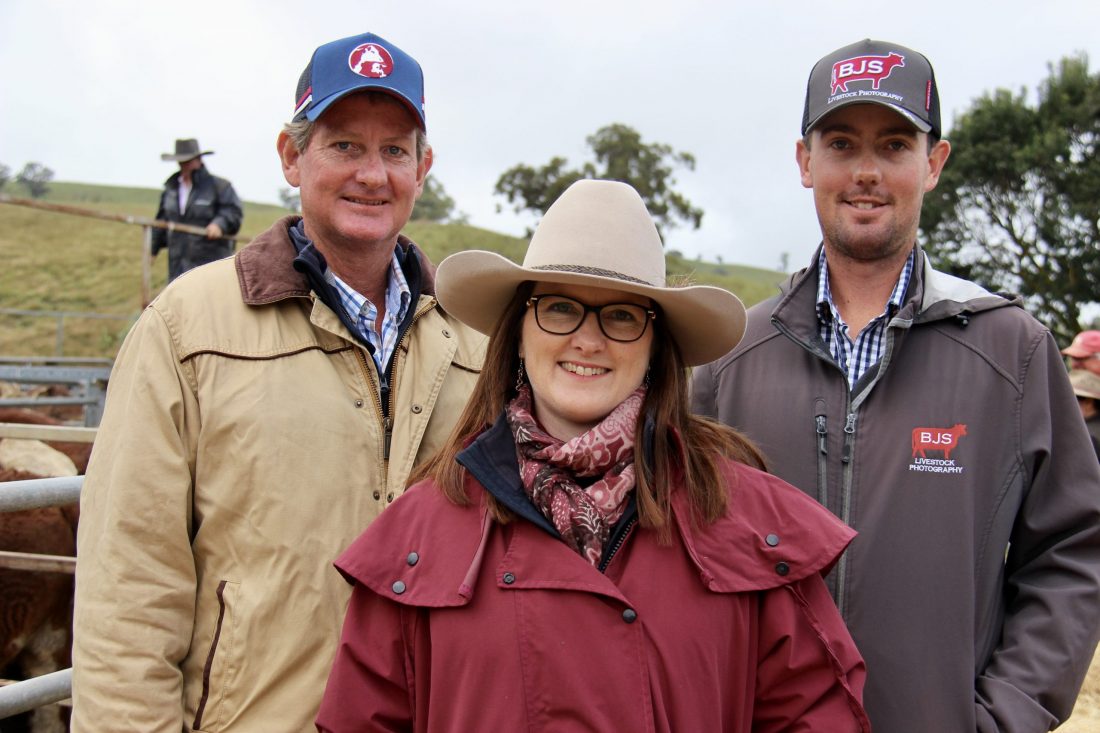 Peter, Deanne and Brandon Sykes, Mawarra Herefords, Longford, attended the Mountain Calf Sales to catch up with friends and clients 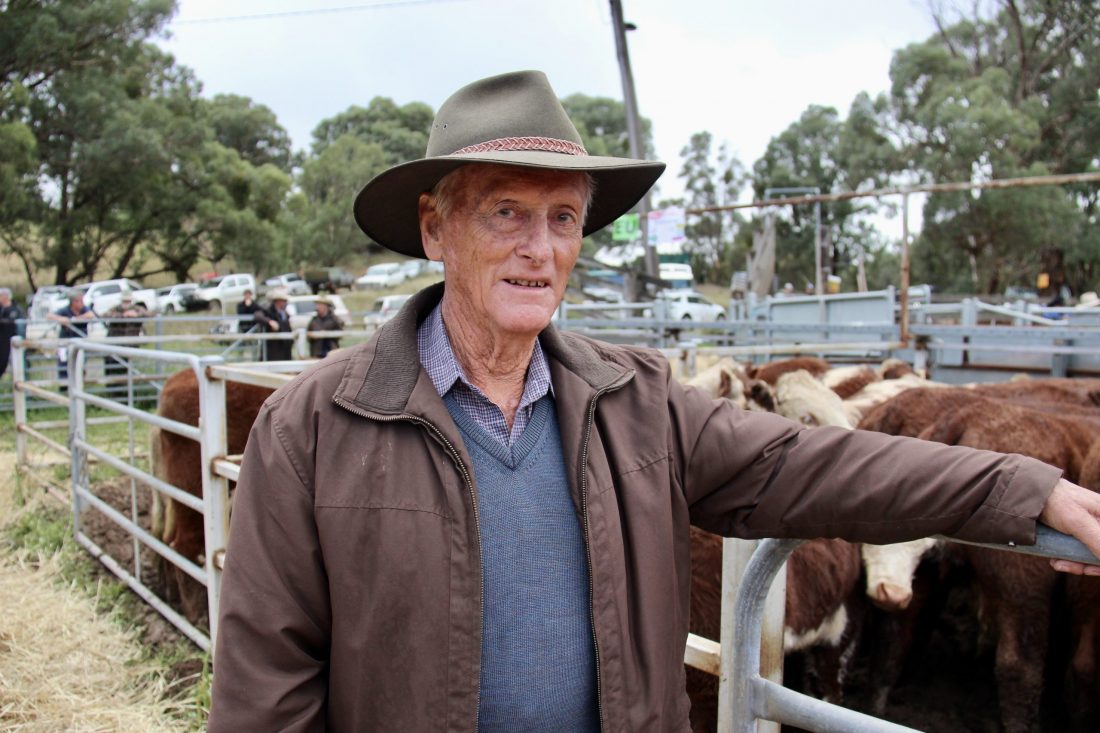