The spotlight well and truly shone on the females at the Omeo Weaner Sale where retockers paid a stellar $2900 for autumn drop Shorthorn/Hereford heifers, leaving the buying gallery and onlookers stunned.

Restockers and lot feeders made a plunge on the heifers, pushing prices skywards by $500 on the morning’s Ensay sale and skyrocketing to a new record for the Omeo saleyard.

Elders Bairnsdale auctioneer Morgan Davies put the buyer frenzy down to Omeo heifers having a well earnt reputation among restockers.

“Over the past two years there has been so many heifers bought out of here to return to the paddocks for breeding purposes,” Mr Davies said.

“In years gone by, it was seldom seen those heifers making any more than the common market value, but the breeding values are determined by farmers who want them, and they certainly wanted those cattle.

“They buy the roan heifers and the good quality Hereford heifers as they are the best in the game.”

Buyers were met with some of the best line-ups of whiteface weaner calves in the nation for the final leg of the 82nd annual Mountain Calf Sales at Omeo, with steers hitting $2760 and heifers $2900.

The fixture finalised two days of selling where 8000 cattle were offered at Hinnomunjie, Benambra, Ensay and Omeo.

The large crowd was left reeling in the rain when a bidding duel erupted on the opening pen of heifers, autumn drop Shorthorn/Herefords from the Ah Sam family, Omeo.

Estimated to weigh 350kg, the heifers were knocked down for a new Omeo record of $2900, while the seconds made $2700 to Elders Echuca.

Topping the purebred heifers was Peter Faithfull, Omeo, with a pen of EU accredited females at $2850.

The sale had opened strongly on the steers with a pen of European Union accredited Hereford steers from Peter Faithfull were snapped up by Elders Yea for $2680.

Then it was onto the autumn drop Shorthorn/Herefords with the Ah Sam family ringing the bell with a pen of 20 EU accredited steers making the sale top and a new record of $2760.

The run of lead steers did not drop below $2310 for the first two rows, such was the weight and quality.

Pat Cleary, ECM Livetsock, awarded the champion pen to Simon and Sonya Lawlor, Omeo, for their 32, EU accredited steers which sold for $2520.

“Producers are getting rewarded for what they have put into it – there was no issue with a tail to the sale with plenty of cattle making 600-800ckg and up to $10/kg on the lighter calves.”

He sourced steers with liveweights of 280-300kg, either paying premium prices or underbidder on the top drafts, to finish on grass for a 300kg carcase weight.

Buyer Dan Ivone, Paull and Scollard Nutrien and Nutrien Ivone Agency, Myrtleford, was active at all sales at the circuit sourcing autumn drop steers and heifers.

“Normally there is a bit of hype at these sales but over the whole yarding it was no dearer than anywhere else,” he said.

“We bought heifers at $1800-$2100 to put back into herds to keep their numbers up for either spring calving or to join in the autumn.

“The heifers anyone wanted for breeding sold at extreme rates.

“There wasn’t as much competition out of the north this year, such as the NSW central west, but plenty from northeast Victoria.”

Vendor Simon Lawlor was speechless when it came to describing the sale result.

“When they started on our 77 heifers and one buyer said he would take the lot, I was thinking you’ve got to be kidding me,” he said.

“It’s a massive rise in the average with the smallest heifers making as much as the steers made last year – that’s incredible money for cattle,” Mr Lawlor said.

“Today has far exceeded our expectations and it’s really nice to see the Hereford breed truly is doing well in the saleyards.

“These beautiful big Herefords have performed and sold really well. It is validation for sticking with the breed and we will stick with them forever.” 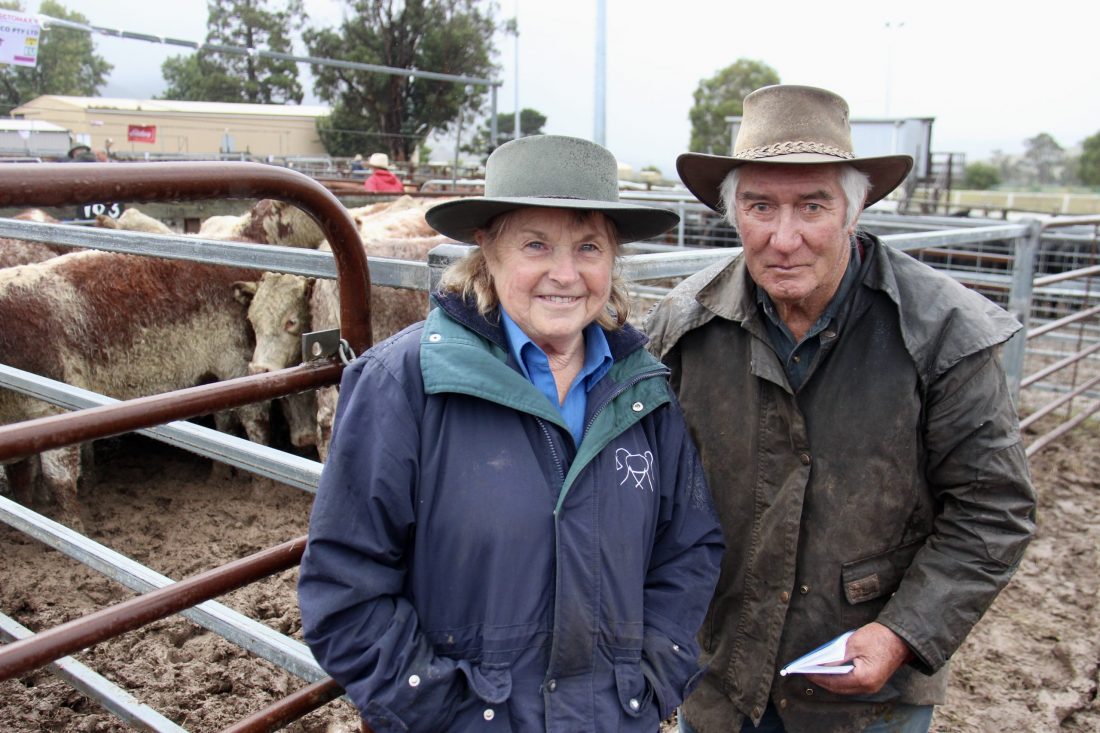 Denise and Bert Ah Sam set the Omeo yards on fire, topping both steers and heifers, with this pen of Shorthorn/Hereford heifers returning $2900 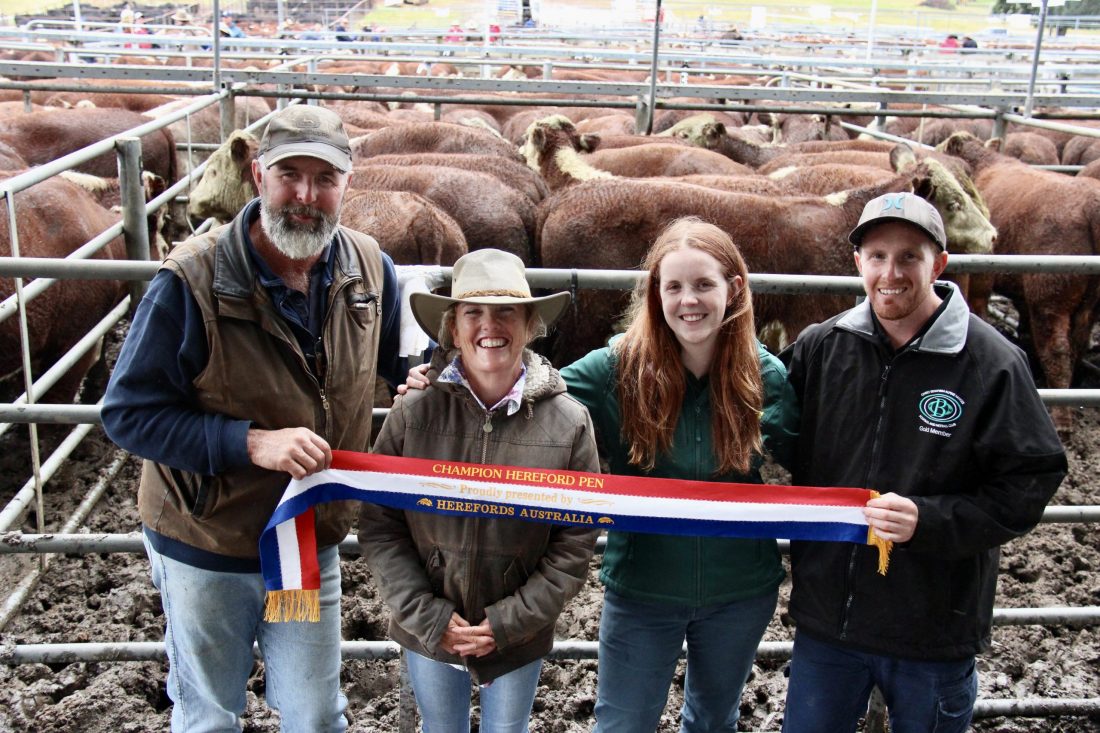 Simon, Sonya, Molly and Tom Lawlor were awarded the Herefords Australia champion pen and sold the steers for $2520 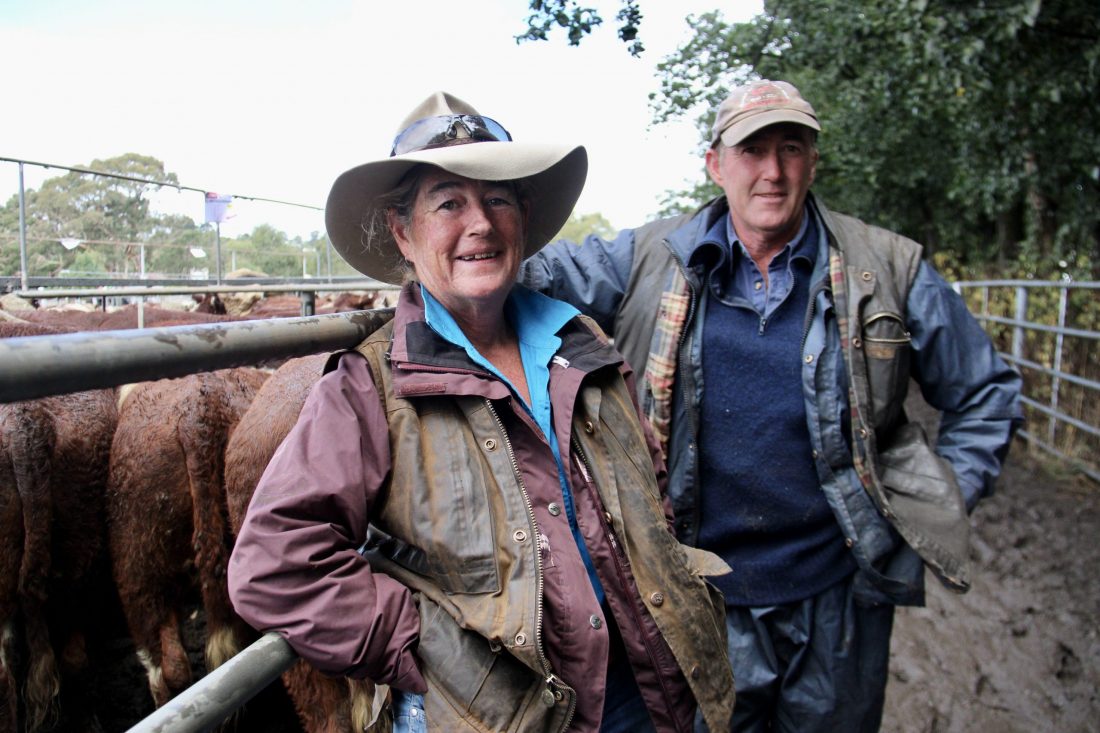 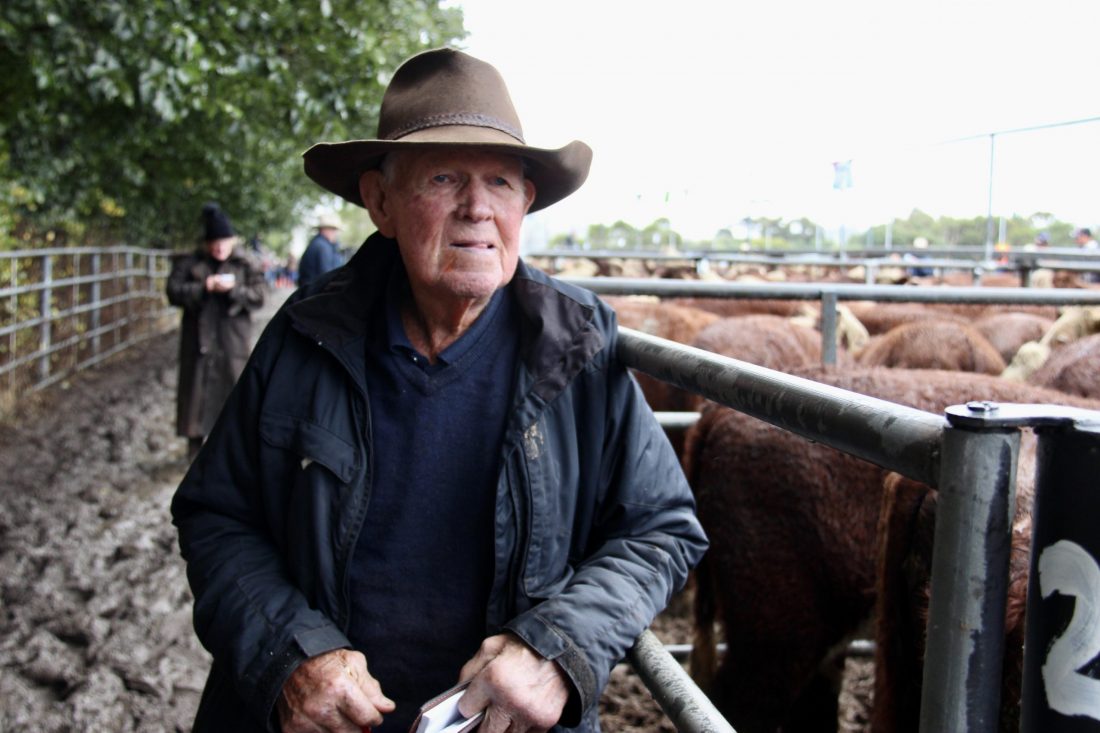 An icon of the annual Mountain Calf Sales, Jim Flannagan, Omeo, with his family’s autumn drop Hereford steers which sold for $2510 to Princess Royal feedlot, SA 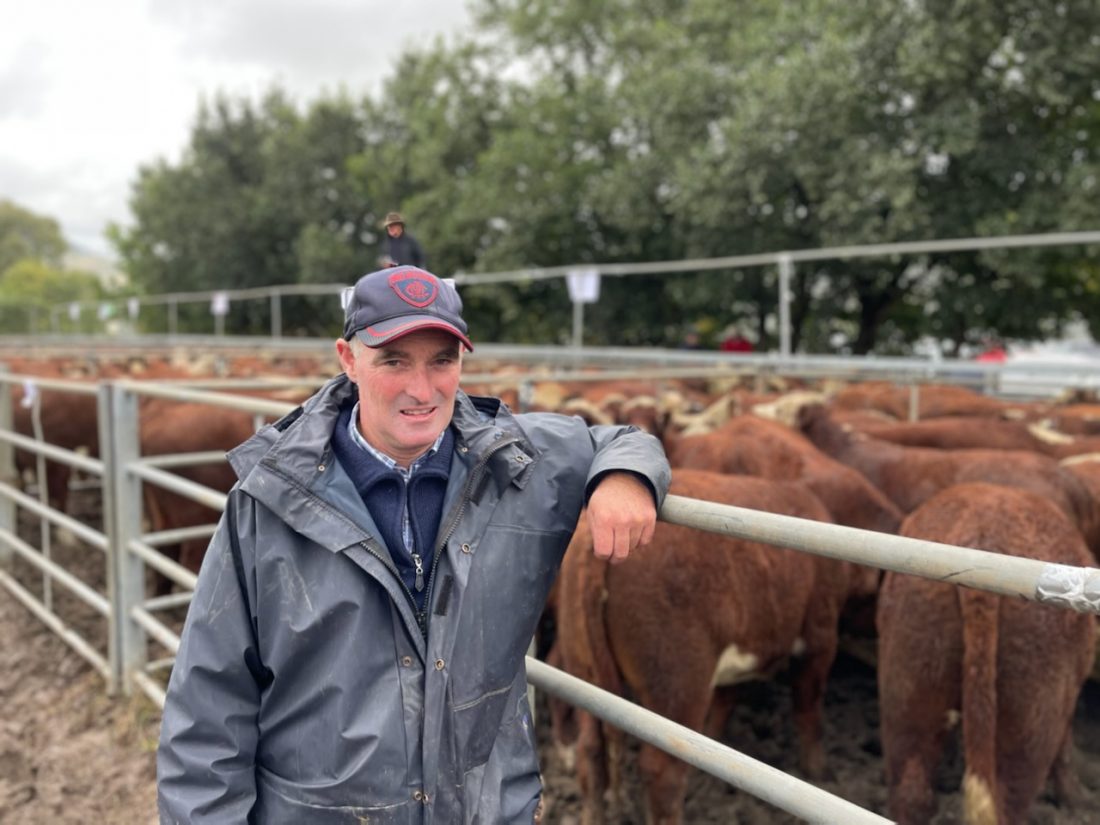 Tim Faithfull, Omeo, with his family’s opening pen of EU accredited steers which sold for $2680 to Elders Yea. Image The Weekly Times 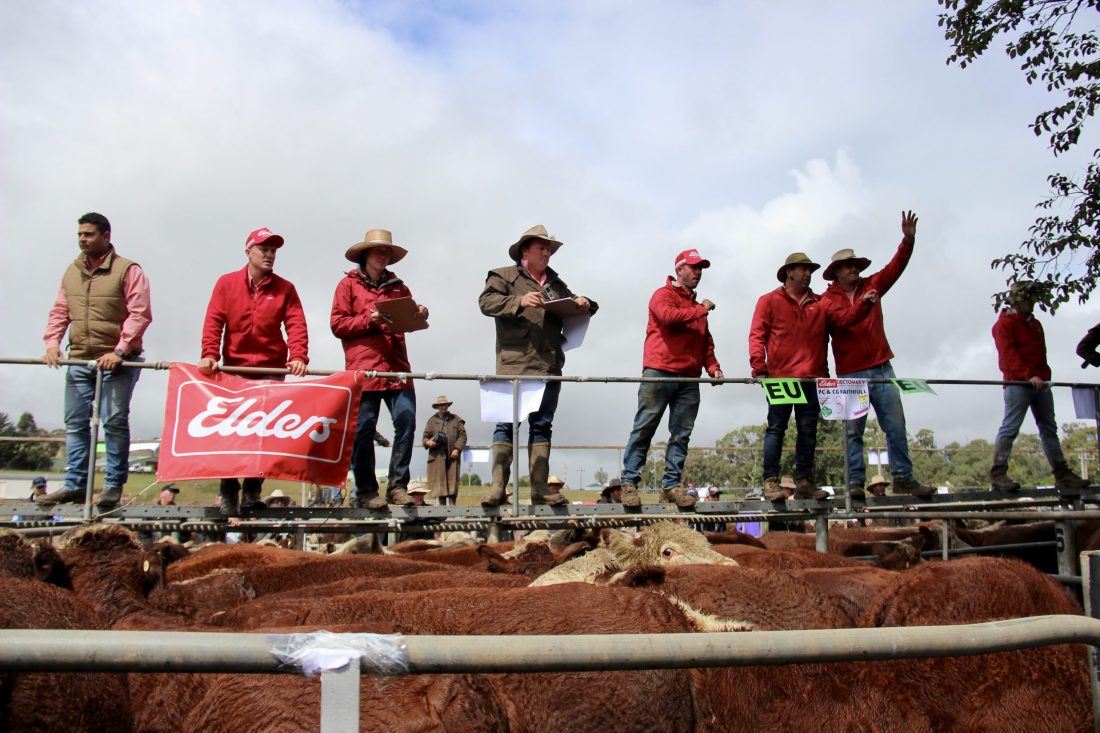 Bids fly on the opening pen of 31 steers offered by Peter Faithfull, Omeo, and sold for $2680 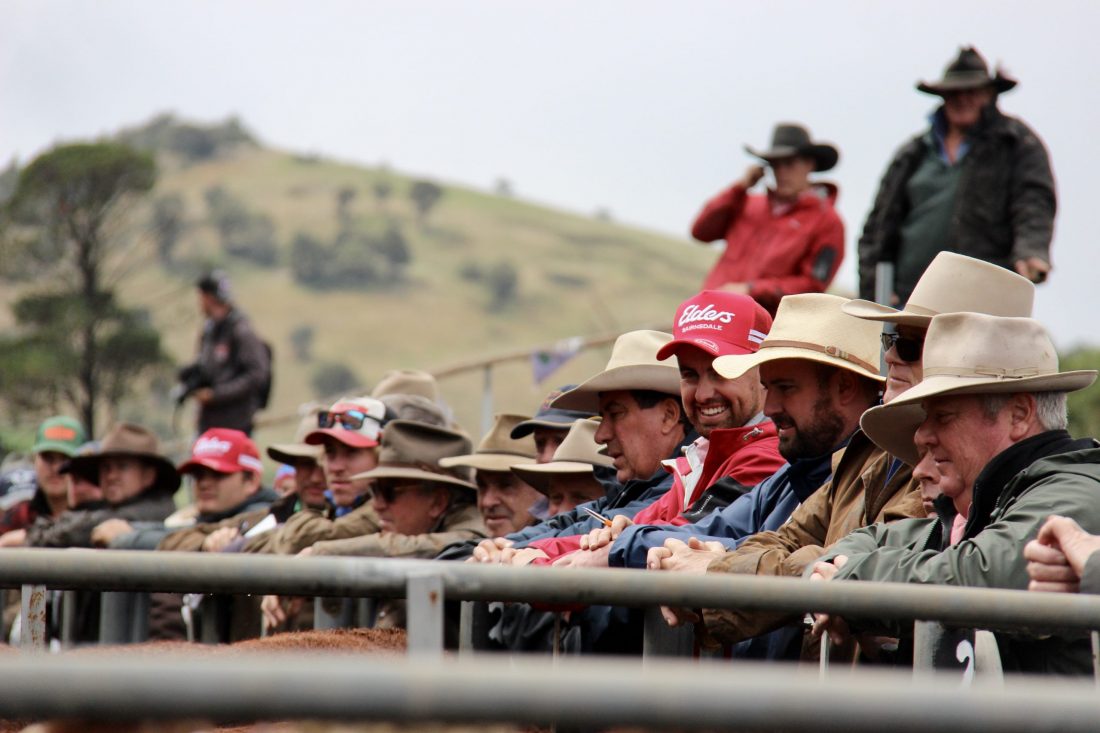 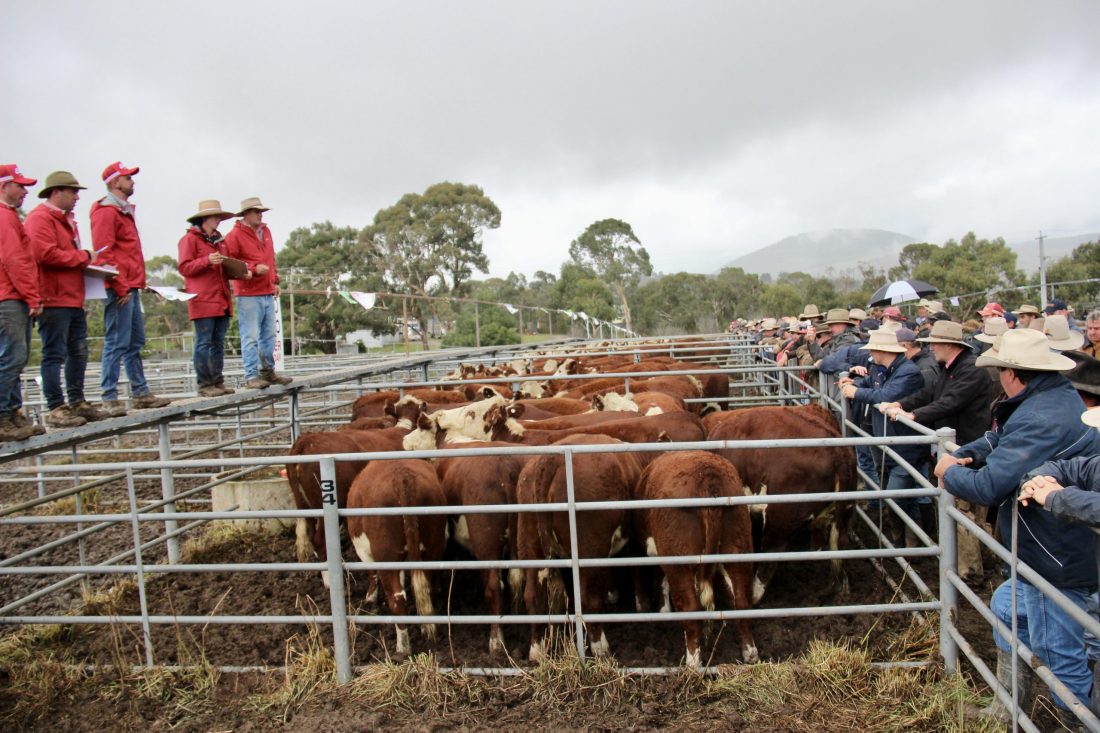 This opening pen of EU accredited Hereford heifers from Batty and Valentin, Omeo, sold for $2210. 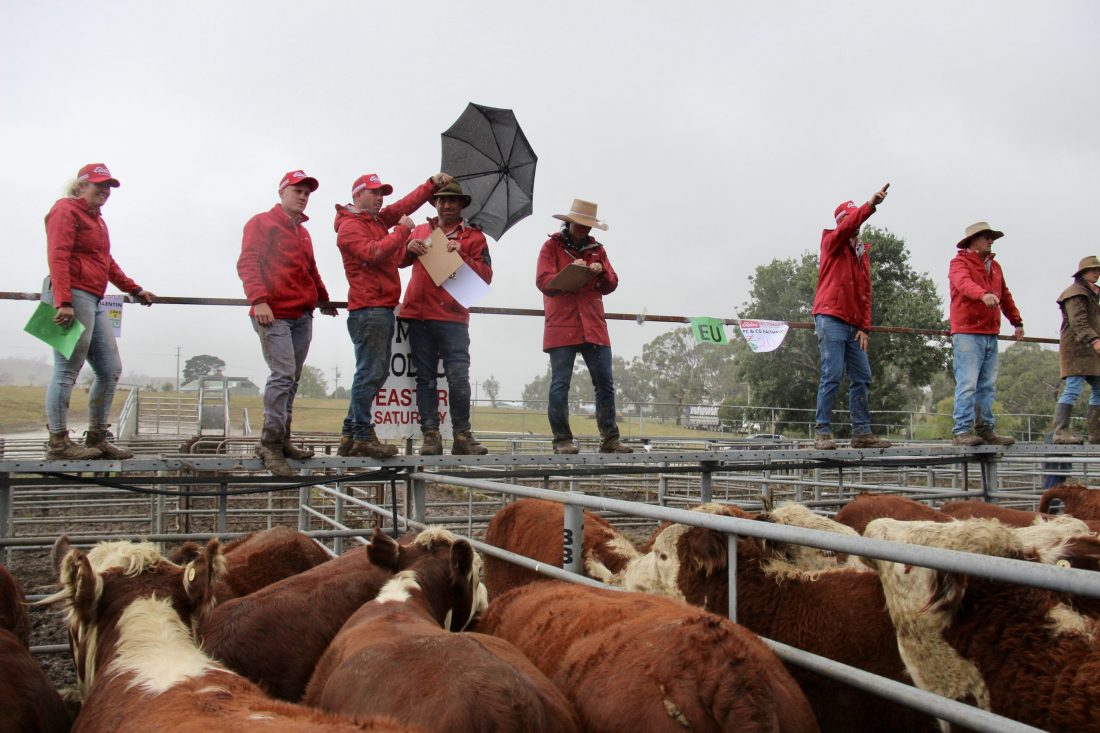