Solid Clearance with Bulls Selling to $40,000 at Wodonga National Sale 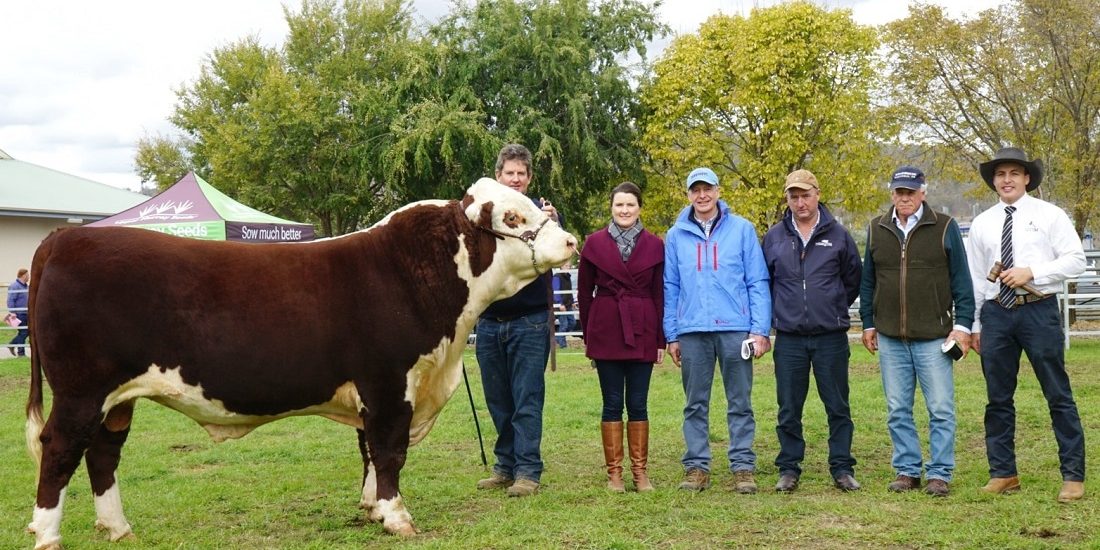 The 54th annual Herefords Australia National Sale hit a top price of $40,000 and averaged $7079 on Thursday.

Held at the Wodonga exhibition Centre on May 9, the sale drew 141 lots from 40 vendors with buyers coming from as far south as Tasmania and north into Queensland.

“I think it was a pretty solid sale considering the conditions that a lot of Australia has been facing.” Mr Milne said.

All four Top of the Drop bulls sold, averaging $7,625 with a top price of $11,000 which was paid by Karoonda Pastoral for the grand champion bull; Tarcombe Justin P016.

The top price of $40,000 was paid by Yarram Park Herefords, Willaura, Victoria, for Mawarra Rhinestone N108.

Offered by the Sykes family of Mawarra Herefords, Longford, Victoria, 24-month-old Rhinestone weighed in at 1018kg, scanned with an eye muscle area of 133sqcm, rump fat of 26mm, rib fat of 14mm and a scrotal circumference of 38cm.

Jeremy Upton of Yarram Park was very pleased with Rhinestone’s phenotype and structure, topped off by an excellent set of figures.

“We believed that for our breeding program he (Rhinestone) was the most complete and well-balanced bull.

“He has excellent structure; he is phenotypically hard to fault and has great data.” Mr Upton said.

A son of the prominent Allendale Anzac E114 and out of Mawarra Miss Titania 054, Rhinestone boasted an impressive set of EBVs, with 200, 400, and 600-day growth figures in the top 5% of the breed.

According to Mr Upton, Rhinestone is a complete genetic outcross for the Yarram Park herd while still being similar in type and style to their females.

“He’s a complete outcross sire, but a bull that suits our cow herd and the type of cattle we’re trying to breed.” Mr Upton said.

Rhinestone will be added to the Yarram Park AI program as well as being joined to cows this year.

“We’re very excited to see some progeny by him as soon as next year.” Mr Upton said.

The Sykes family were very pleased with their sale results, having offered and sold 10 bulls at the Wodonga sale with an average price of $15,500.

“We’re very happy to have sold all our bulls and to have topped the sale, we couldn’t have had a better day.” Logan Sykes said.

Deanne Sykes said that the family was very humbled to receive such strong support for their breeding program when the season has been so difficult.

Sold by the Trovatello family of Glendan Park Herefords, Kyneton, Victoria, New Sensation was the top priced horned bull of the sale and placed first in his class on show day.

New Sensation was sired by Warringa Google G23, a sire that has been very successful in the Glendan Park stud according to Alvio Trovatello.

“Google has bred Knockout and Lassoo that have both been grand champions here a couple of years ago, so we’ve been pretty happy with the way he’s bred for us.” Mr Trovatello said.

Mark Campion was very impressed with New Direction’s structure and muscularity and had been looking “far and wide” for new stud sires to complement the Amos Vale herd.

“The Glendan Park bull is a big, powerful, meaty bull with a good top line and he’s a good mover.

“Mawarra Glory has a beautiful head and eye with a good top line.

The third top price of the sale of $24,000 was paid for another Mawarra bull; Mawarra Real Time N038.

Ravensdale Poll Herefords also had a successful sale day, selling all 16 of their bulls for an average price of $6,900 and making a top price of $20,000 with reserve senior champion bull; Ravensdale Hotwire N014.

Brian Burgess of Ravensdale was very happy to have sold all 16 bulls after receiving the award for most successful exhibitor on show day.

“We’re very happy not to be taking any (bulls) home.” Mr Burgess said

Wodonga Show and Sale committee chairman, Alvio Trovatello agreed that the sale had a good result considering the season.

“It was a good outcome, with a good top, a good middle and overall good average.

“There were a lot of bulls that sold at $4000 but really at the end of the day in the current environment I think the clearance was a good outcome and when everyone goes home and analyses it and digests it they’ll be pretty happy with that.” Mr Trovatello said. 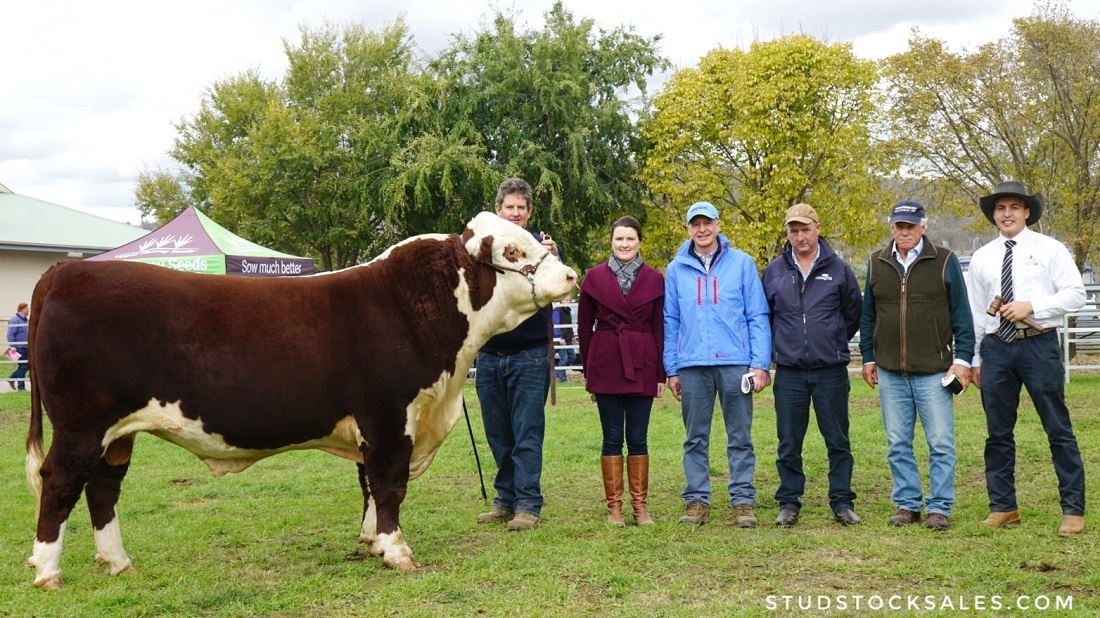 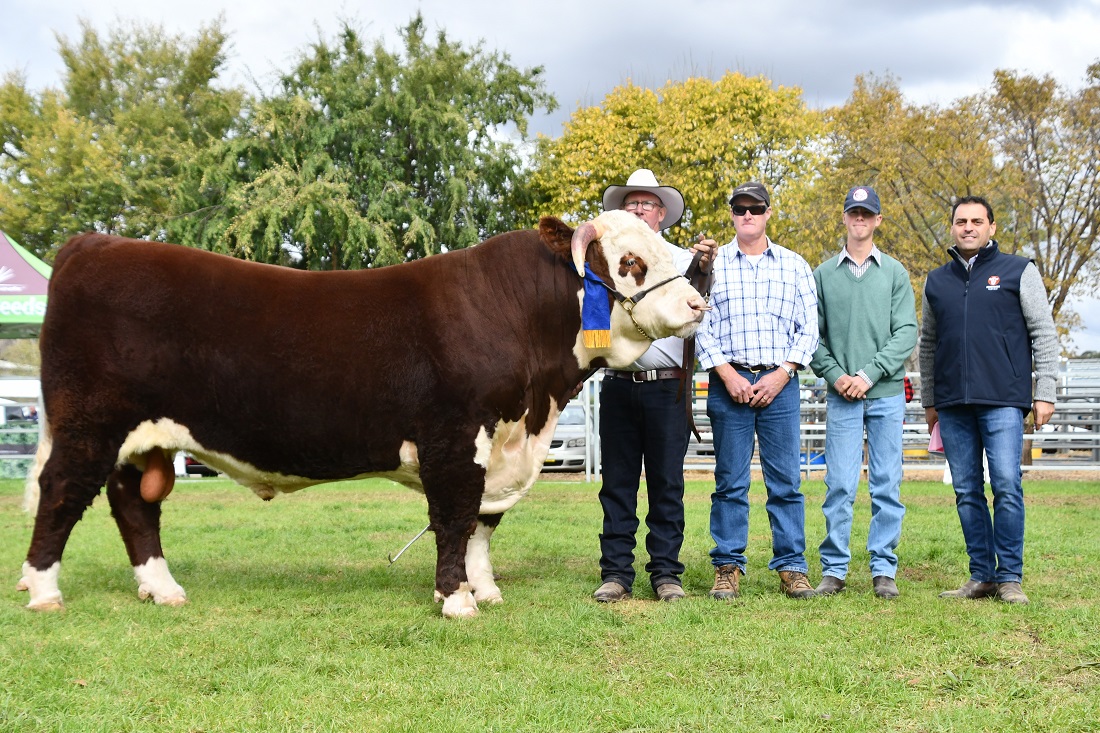 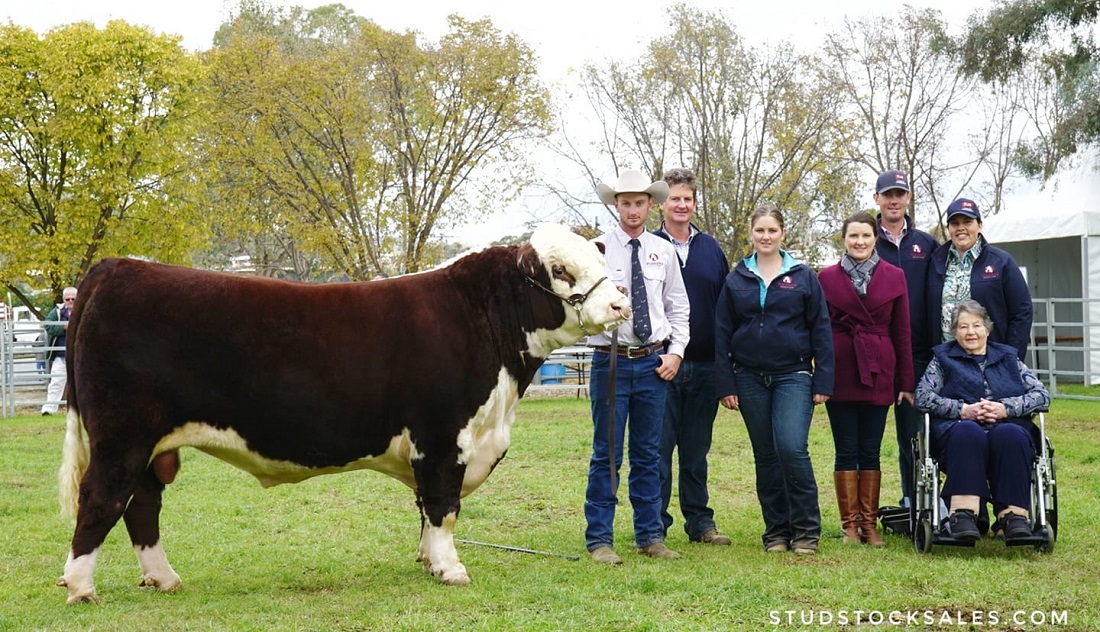 Mawarra Real Time N038  was purchased by Kelly and Teeny Runzer of Tenaru Poll Herefords, Goondiwindi, Queensland for $24,000. Pictured with the Sykes family of Mawarra Herefords. 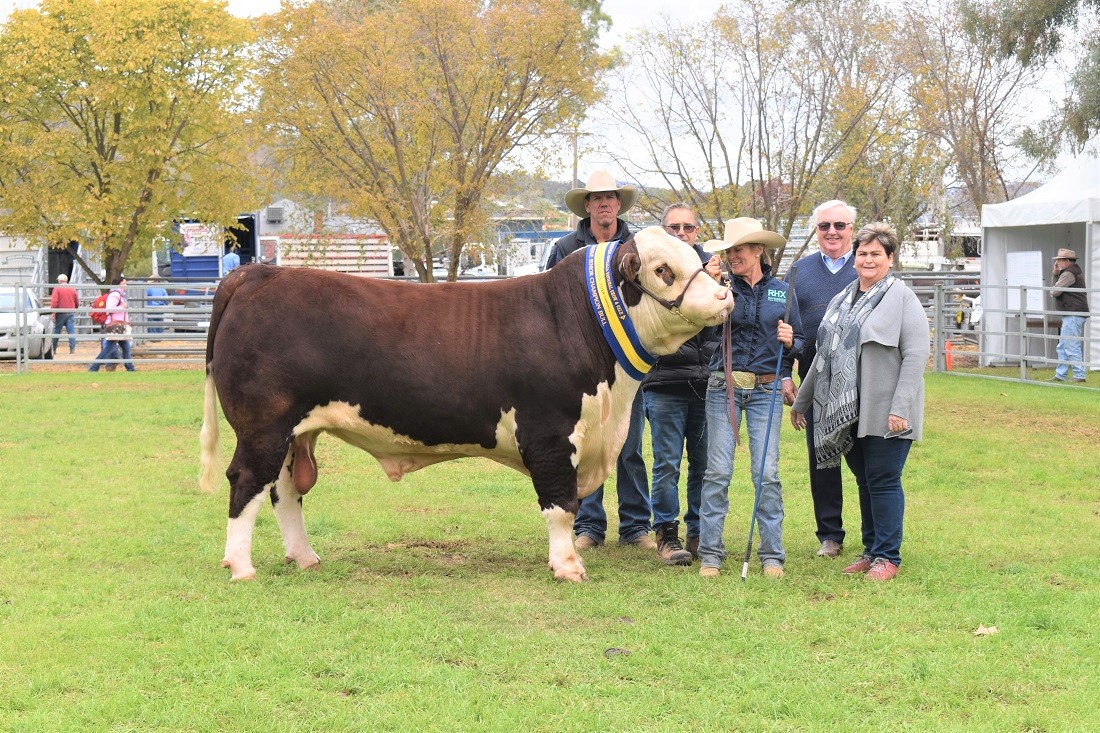