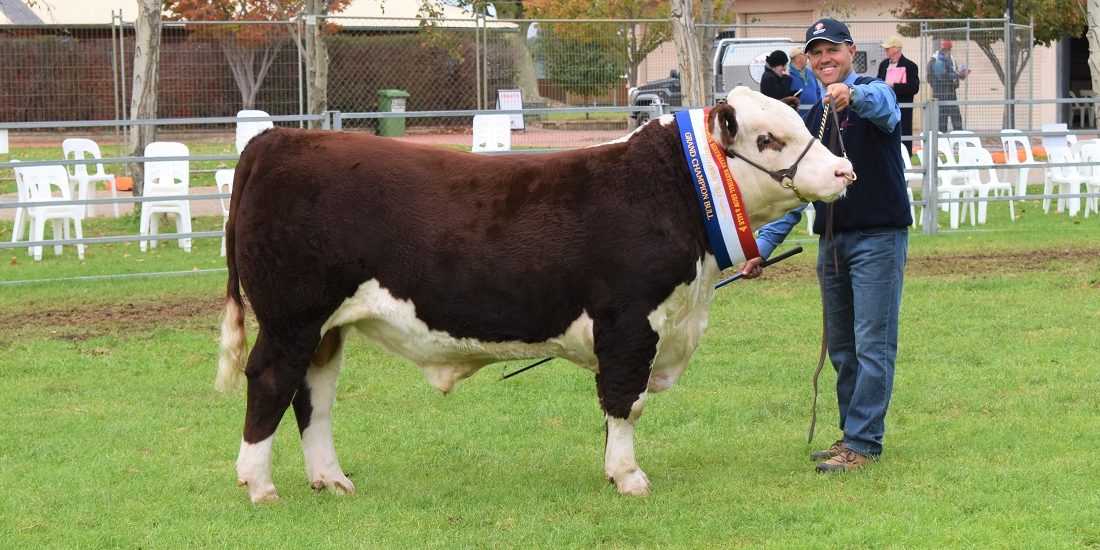 The hotly contested title of grand champion bull at the 2019 Herefords Australia National Show in Wodonga has been claimed by 14-month-old Top of the Drop champion; Tarcombe Justin P016 (AI) (ET) (P).
Held at the Wodonga Stud Stock Exhibition Centre on May 8, the Herefords Australia National Show hosted a quality line up of 141 bulls from 40 vendors.
The February 2018 drop grand champion bull was sired by Wirruna Justin J13 (AI) (PP) and weighed in at 586kg.
Tarcombe Justin scanned with an eye muscle area of 98sqcm, rump fat of 14mm, rib fat of 9mm and a scrotal circumference of 38cm.
The grand champion impressed judge Lachy Day of Days Whiteface with his even muscle pattern and structural correctness topped off with an impressive set of EBVs.
“He’s a bull that really appealed to me for his muscle pattern and medium maturity pattern.
“He has a strong hock and a good set of testicles as well as a good birth weight figure.
“His numbers are outstanding, his birth to growth spread and his carcase data were amongst the best that I saw in the catalogue.” Mr Day said.
Tarcombe Justin was exhibited by Tim Hayes of Tarcombe Herefords, Ruffy, Victoria.
Reserve champion Top of the Drop calf was awarded to Allendale Gallipoli P021 (AI) (ET) (PP).
Exhibited by Allastair Day of Allendale Studs, the 12-month-old calf weighed 574kg and was described by the judge as “a bull with high genetic merit.”
The competitive junior division of the show was won by Ravensdale Bushranger N200 (PP), exhibited by Ravensdale Poll Herefords, Holbrook, NSW.
Sired by the influential Injemira Anzac K220, 20-month-old Bushranger weighed 838kg, with a raw EMA of 122sqcm and a rump fat depth of 11mm.
Mr Day was pleased with Bushranger’s structure and movement around the ring.
“I really like the length of this bull, he has a good spine and walks out well.
“He was the (junior) bull that appealed to me most.” Mr Day said.
Junior reserve champion bull was awarded to Mawarra Ransom N364 (AI) (ET) (S), exhibited by Mawarra Herefords, Longford, Victoria.
At 19 months of age, Ransom weighed in at 886kg and was described by Mr Day as “a bull to be much admired.”
In the intermediate division Mawarra Gunsmith N146 (S) took home the champion sash.
Gunsmith weighed 930kg and scanned with an EMA of 132sqcm, rib fat of 10mm and rump fat of 17mm.
Mr Day was impressed with the all-round completeness of Gunsmith.
“This bull looked great on parade and has a medium maturity pattern and a great muscle pattern.
“He’s just a really complete bull.” Mr Day said.
Intermediate reserve champion bull was presented to Ravensdale Blackhawk N081 (AI) (ET) (P).
Also sired by Injemira Anzac K220, 23-month-old Blackhawk weighed 970kg, with an impressive 600-day growth figure of +116kg.
The notable growth figures and carcase of Blackhawk was what particularly appealed to Mr Day.
“I really like the phenotype of this bull, he has a lot of carcase and good testicles, as well as having huge growth.” Mr Day said.
Senior champion bull was another win for Tarcombe Herefords with 24-month-old Tarcombe Fort N093 (S).
Sired by Wirruna Fort F382 (ET) (PP), Tarcombe Fort weighed 976kg, with an EMA scan of 125sqcm, rump fat of 19mm and rib fat of 10mm.
Fort’s sound structure and good data was what earnt him the champion sash from judge Lachy Day.
“I like his maturity pattern and structural correctness.
“He has good, sound data and good muscularity.” Mr Day said.
Senior reserve champion bull was awarded to Ravensdale Hotwire N014 (TW) (PP).
Another Injemira Anzac K220 son, 26-month-old Hotwire weighed 984kg with an EMA of 134sqcm.
Mr Day was particularly pleased with Hotwire’s completeness and muscle pattern.
Overall, Mr Day was very happy with the champion line up of bulls on the day.
“They were all medium maturity pattern and nice muscle shape.
“They’re really a group of bulls that will do a lot of good for the breed and in the industry.” Mr Day said.
The title of most successful exhibitor at the Wodonga National Show was won by Ravensdale Poll Herefords. 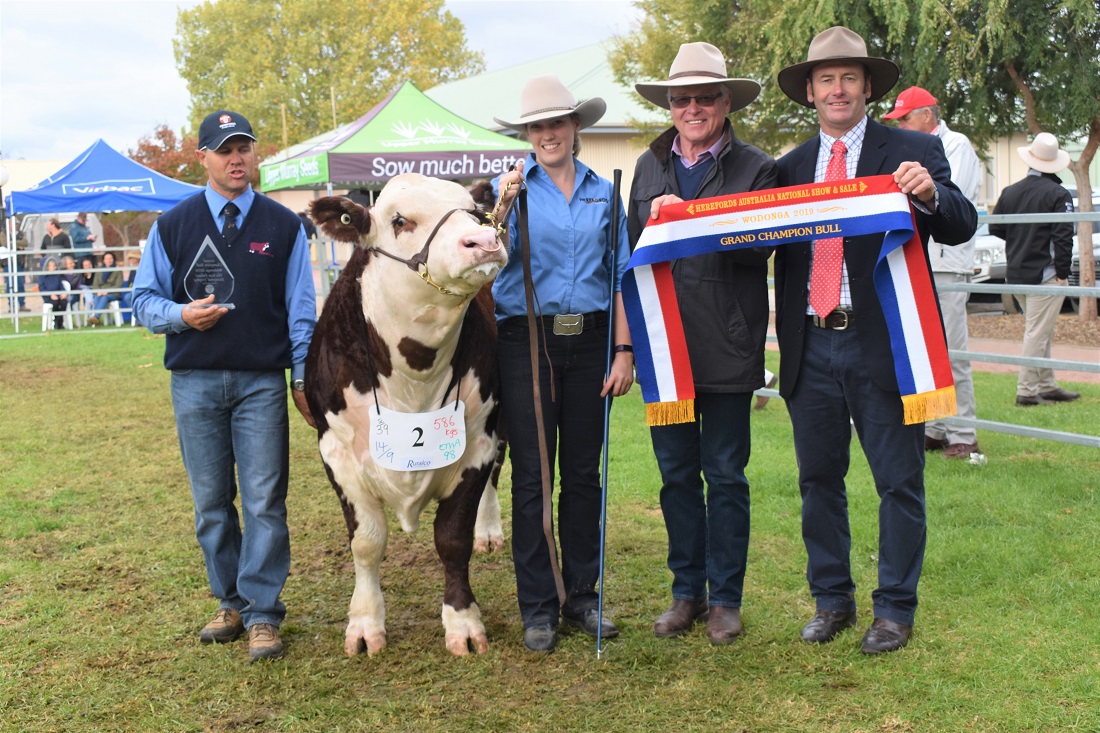 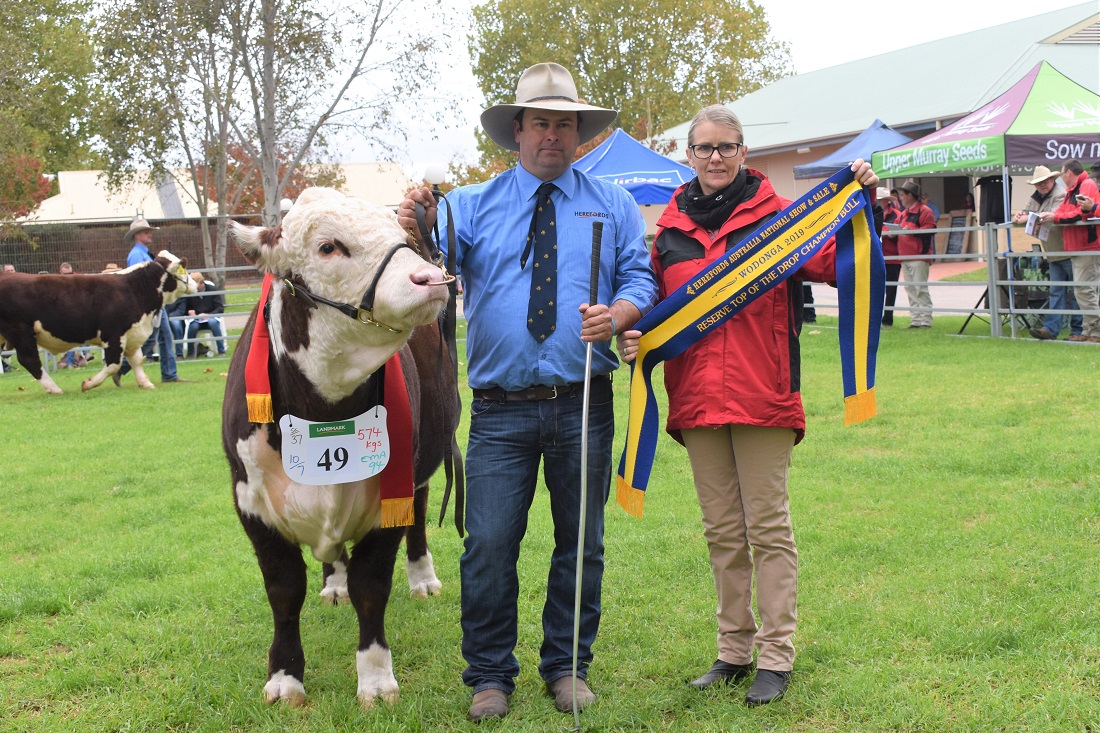 Top of the Drop reserve champion was awarded to Allendale Gallipoli, exhibited by Alastair Day. 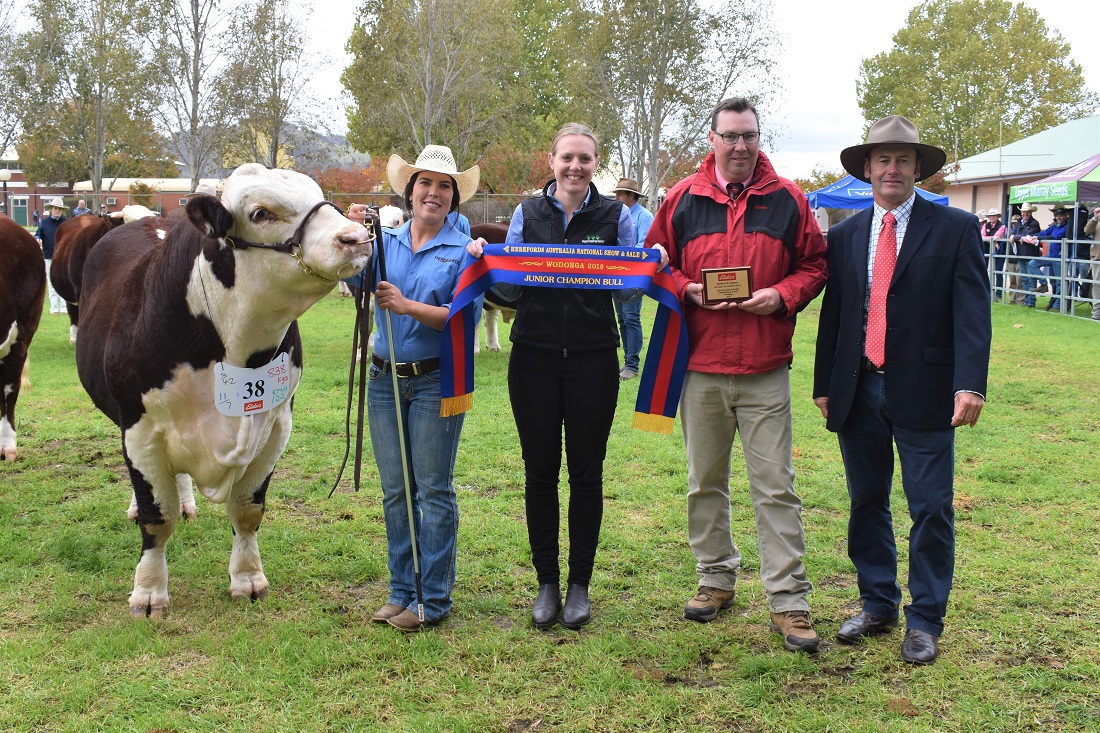 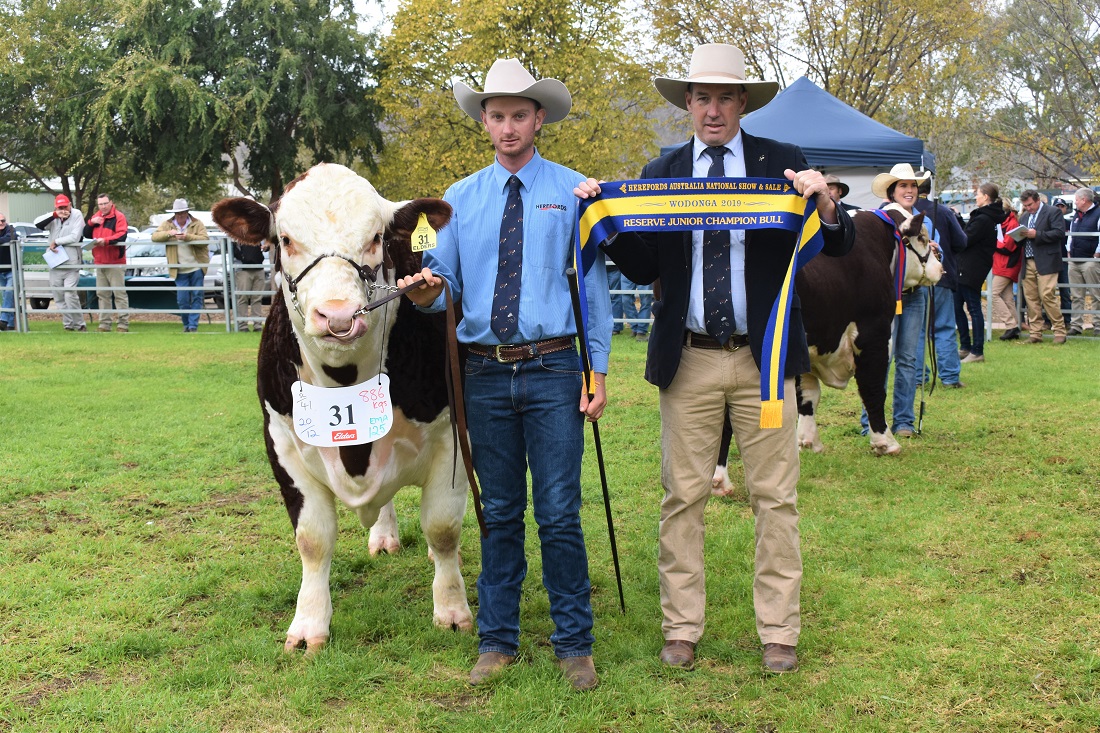 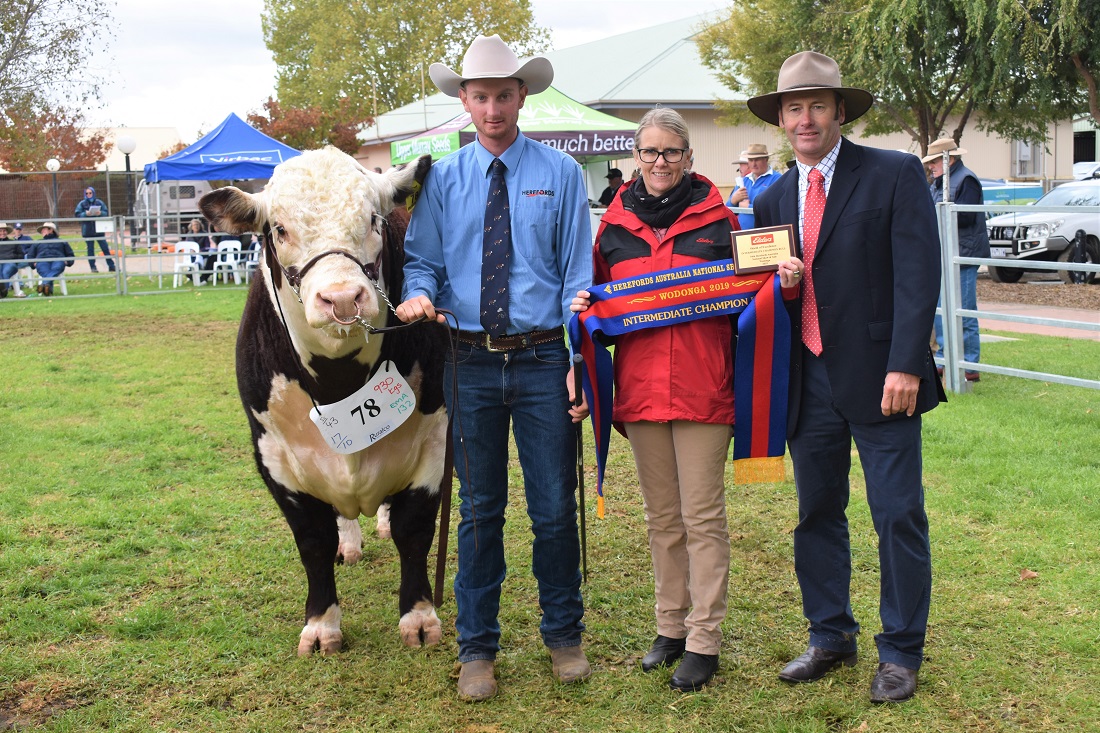 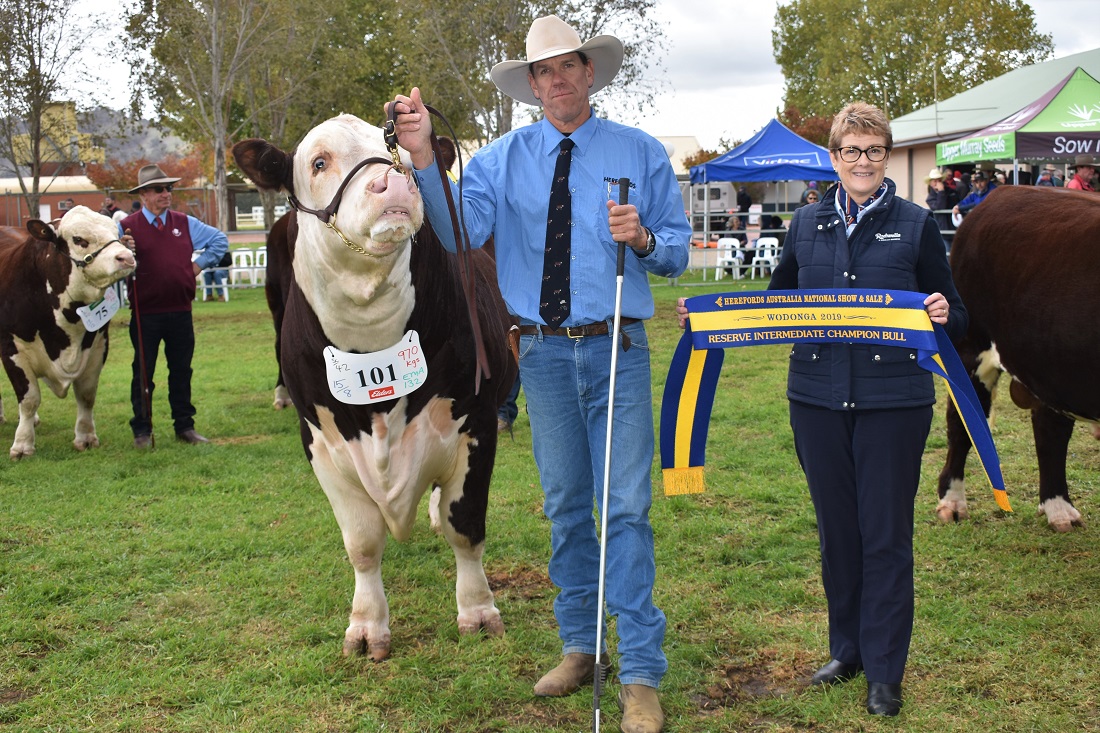 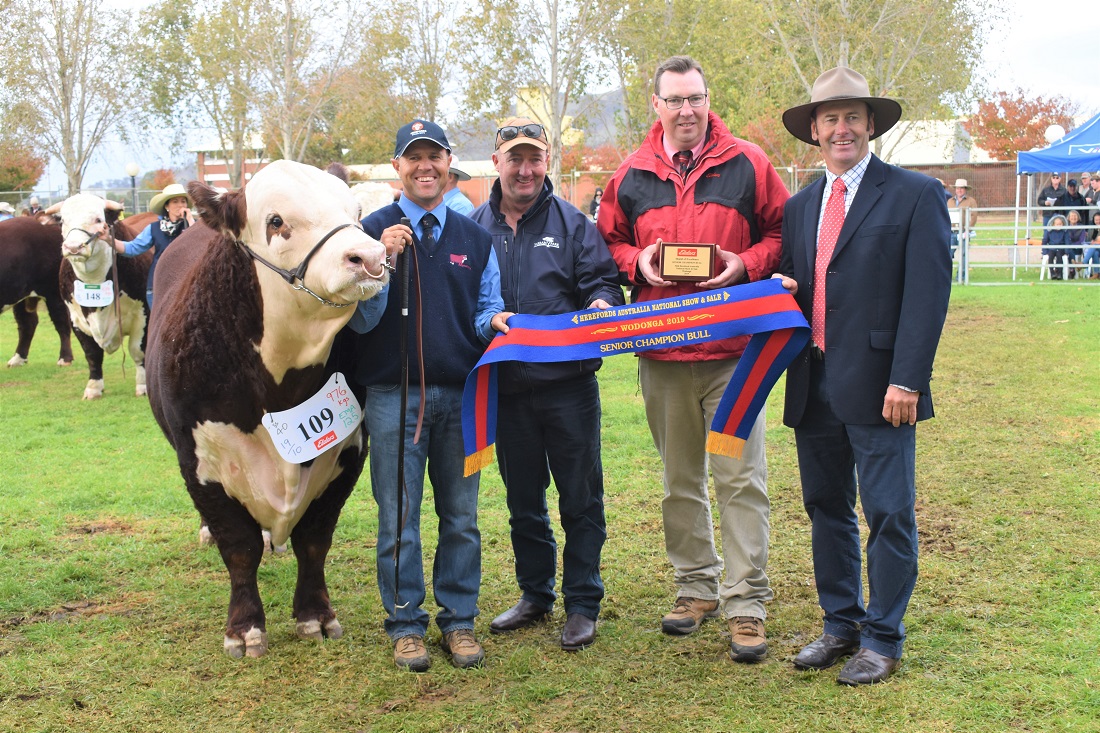 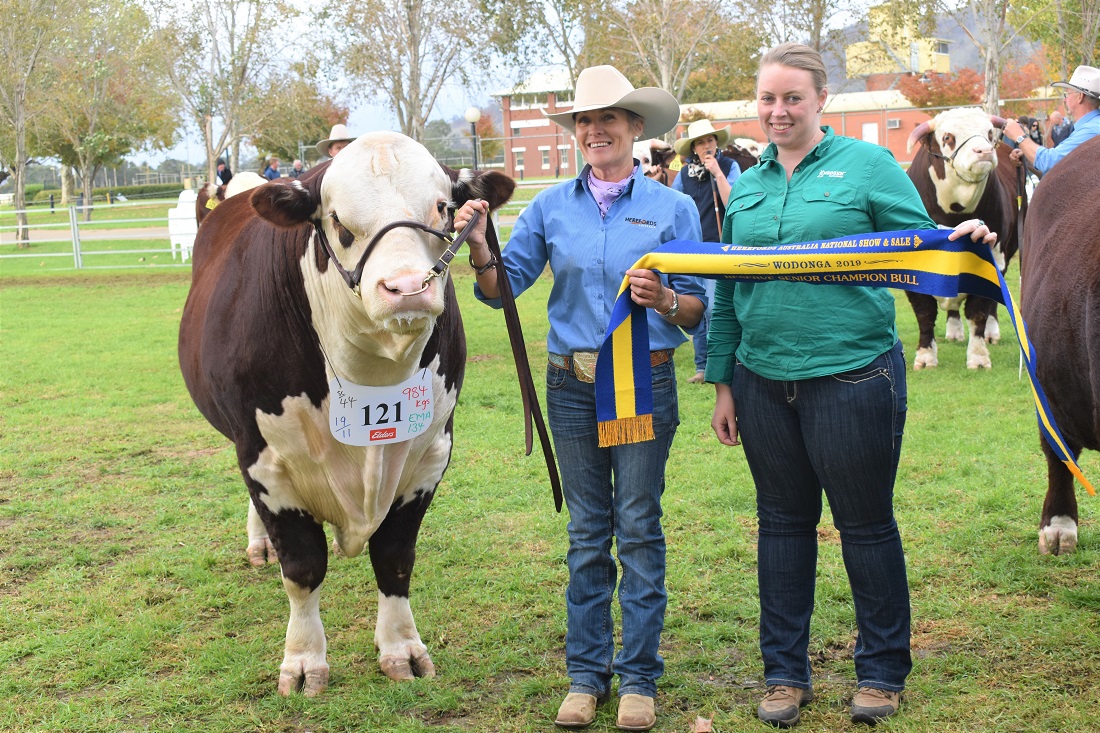 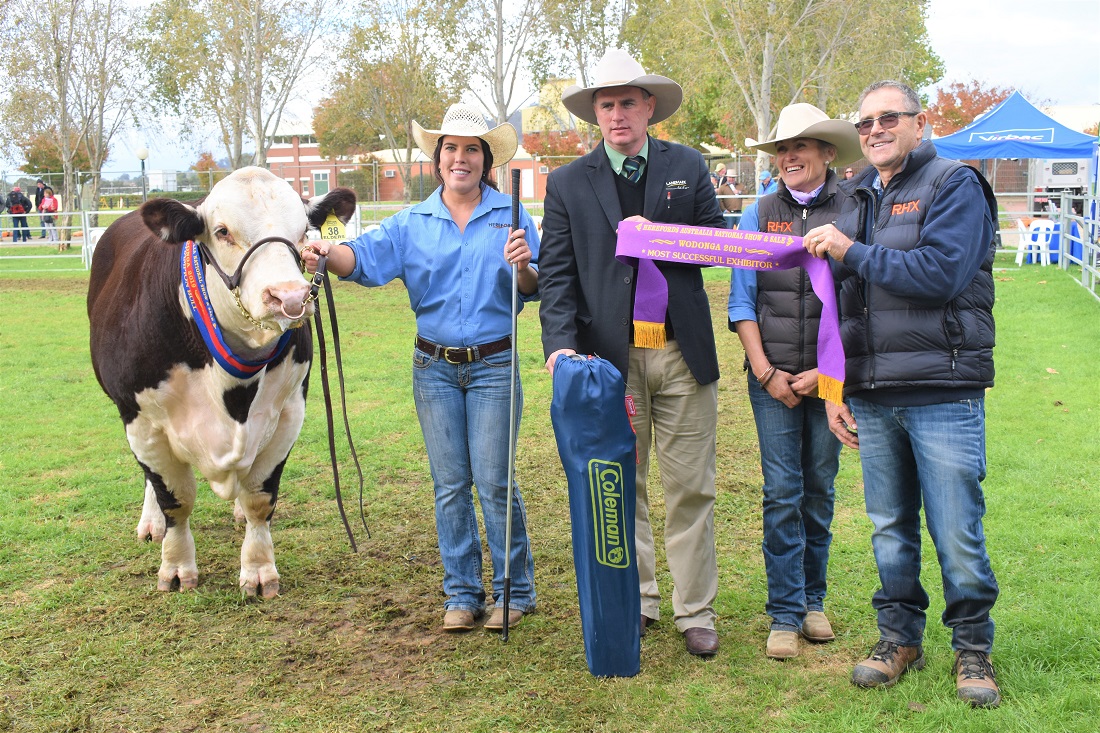