The couple, of Omeo, will be ringside at the Herefords Australia National Show and Sale at Wodonga on May 8-9 to select their newest sires.

They have long supported the sale as an opportunity to compare bloodlines under the one roof.

Within their own herd, there is an emphasis on maternal genetics, fertility and carcass traits in a harsh environment where winter temperatures can drop to minus 10 degrees Celsius.

Like all high country producers, the Lawlors have experienced two failed springs, a grasshopper plague and one of the driest periods in living memory.

They had their hopes pinned on the 2019 Mountain Calf Sales, and they weren’t disappointed with their heifer average jumping by $200 on 2018.

Simon and Sonya dovetail 300 April-May calving breeders with 600 first cross ewes on 1417 hectares in the Livingstone valley at Omeo.

Set in a 750-1125 mm rainfall zone, the country ranges from alluvial creek flats to grey sandy loams and native bush bound by a wild dog fence.

Simon said the region’s cow herd was well down due to drought, with producers making tough decisions about maintaining their core numbers.

The couple has retained 45 heifers this year – 10 less than normal.

“I went through them to trim the numbers up but it’s hard giving those genetics to someone else,’’ Simon said.

Post-weaning, all cows are moved to the bush paddocks to graze over summer and to calve.

“We’ve got three fantastic high runs from 1000 to 1200 metres (altitude) for grazing the cows from January through to May,’’ Simon said.

“We start mustering at the end of April and have the cows home before the first snow fall.

“The heifers calved a little earlier this year to make life easier before the weaner sales.

“They are normally joined over six weeks but last year it was over 12 weeks to pick up those on the second cycle.’’

Pregnancy scanning results revealed a 90 per cent conception rate in the cows.

“Our best calves come out of the oldest cows – one of our top steers weighed 430kg and was out of a 12-year-old cow,’’ Simon said.

He works off-farm as a bulldozer operator, helping with containment lines in this year’s high country fires while monitoring his own cattle in the path of the fire.

“The bush was relatively green with good feed this summer and the cattle are doing well,’’ he said.

“As a third generation cattle breeder here, the bush leases are an important part of our farming operation.

“It gives us the opportunity to provide a feed wedge for winter.’’

Simon considers himself a “grass grower’’ rather than a beef producer.

The cattle are rotationally grazed on perennial and short-term pastures, and supplemented with hay or silage grown on-farm, with calves averaging 1.5 kg/day of liveweight gain.

The Lawlors grow triticale, annual ryegrass and clover fertilised with single super at 300kg/ha for hay while cocksfoot and fescue pasture has suited the dry seasonal conditions.

In most autumns, turnip and rape crops are grown across 24-40 hectares.

The breeders are fed silage in June-July to maintain body condition, encourage ovulation to ensure conception at joining.

A 28ha paddock was sown to Caledonian kale this year at 4.5-5kg/ha with 200kg/ha of single super in January after a thunderstorm but the juvenile plants were decimated by grasshoppers.

“Kale is a long, slow maturing crop with an enormous amount of dry matter per hectare,’’ Simon said.

“We grow a lot of feed over the winter months to create a feed wedge – where we can get a tractor in, we will sow as we have very little native grass country.

“I’ve grown a lot of Italian ryegrass short rotational crops and perennial ryegrass on the better country for the calves and lambs to graze.’’

The second cross lambs are turned off as suckers into the Corowa saleyards and, recently topping at $242/head, have been a profitable part of the business.

But, if the drought deepens further, Simon concedes the plan is to off-load the sheep first as buying back the generations of Hereford genetics would be difficult.

Bulls are sourced from regional on-property sales and the Herefords Australia National Show and Sale at Wodonga.

The 300 breeders and 60 heifers are a mix of Mawarra, Newcomen, Red Hill and Beggan Hill genetics.

Simon and Sonya like to watch the show classes at Wodonga where they can compare the performance of different bloodlines.

“We like to bring a consistency of a line to breed true to type,’’ Simon said.

“Many of our bulls go back to Bowmont Storm and Red Hill Insight.

“Wodonga is the only place we can see these lines together.’’

“This year we have to decide whether to buy enough hay and pellets to get us through the drought, and stretch a bull to get another year out of him rather than turning them over.

“Wodonga is a great opportunity to see where the industry is at.

“I’m wary of outcross bloodlines and like to see a couple of generations of a proven maternal line.’’

Simon admits there is friendly rivalry among the high country producers as all seek bulls with coat and colour, muscle, athletic ability and softness.

He classes the heifers himself on conformation, coat and colour, and joins the mature ones to calve as two-year-olds while lighter weight heifers are allowed to calve as three-year-olds.

Calves were weaned in late November and treated with Piliguard due to the dusty conditions.

Sonya cares for the calves during three to four days of weaning in small paddocks and they are supplemented with hay.

They are then drafted according to weight and fed silage for three weeks.

“At the weaner sales, all the buyers want soft, easy doing cherry red calves even though we all know they are the same once the hide is off,’’ Simon said.

“Selling at the weaner sale is tradition for us and you can be well rewarded for a good article produced locally.’’

This year, the Lawlors topped the overall mountain calf sales circuit for autumn-drop heifers at $1090 while their steers sold to $1110.

Simon began working with Herefords at the age of 16 under the guidance of his uncle Bill Flannagan.

“Herefords are so at home and do well in this environment,’’ he said.

“It was wonderful to see Herefords Australia get behind the live export order for heifers at the calf sales.

“It was one of the most positive things to happen to the breed in recent years and certainly picked our average up in a year when we thought it would be softer.’’ 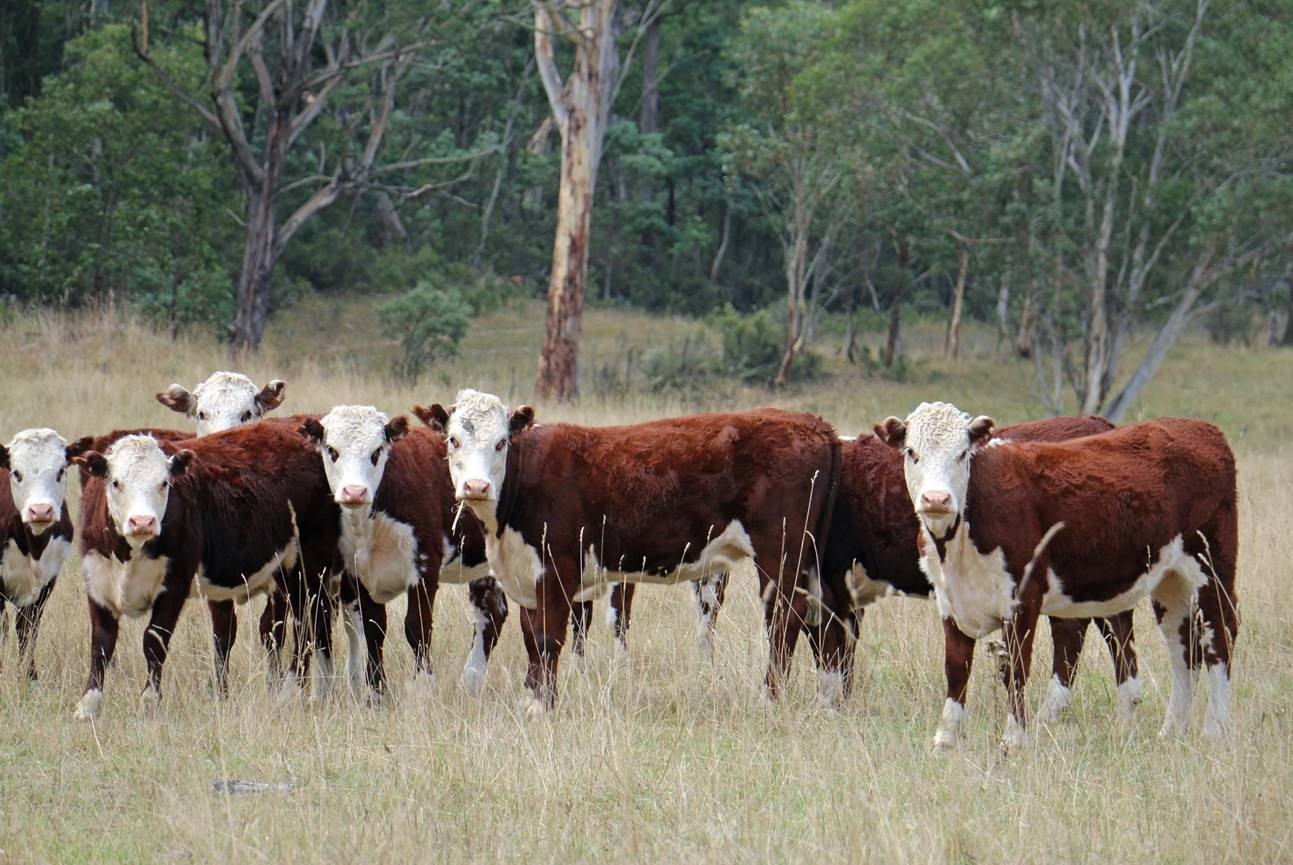 The Lawlors herd has been selected for maternal and growth traits, and run the high country snow leases for three generations. 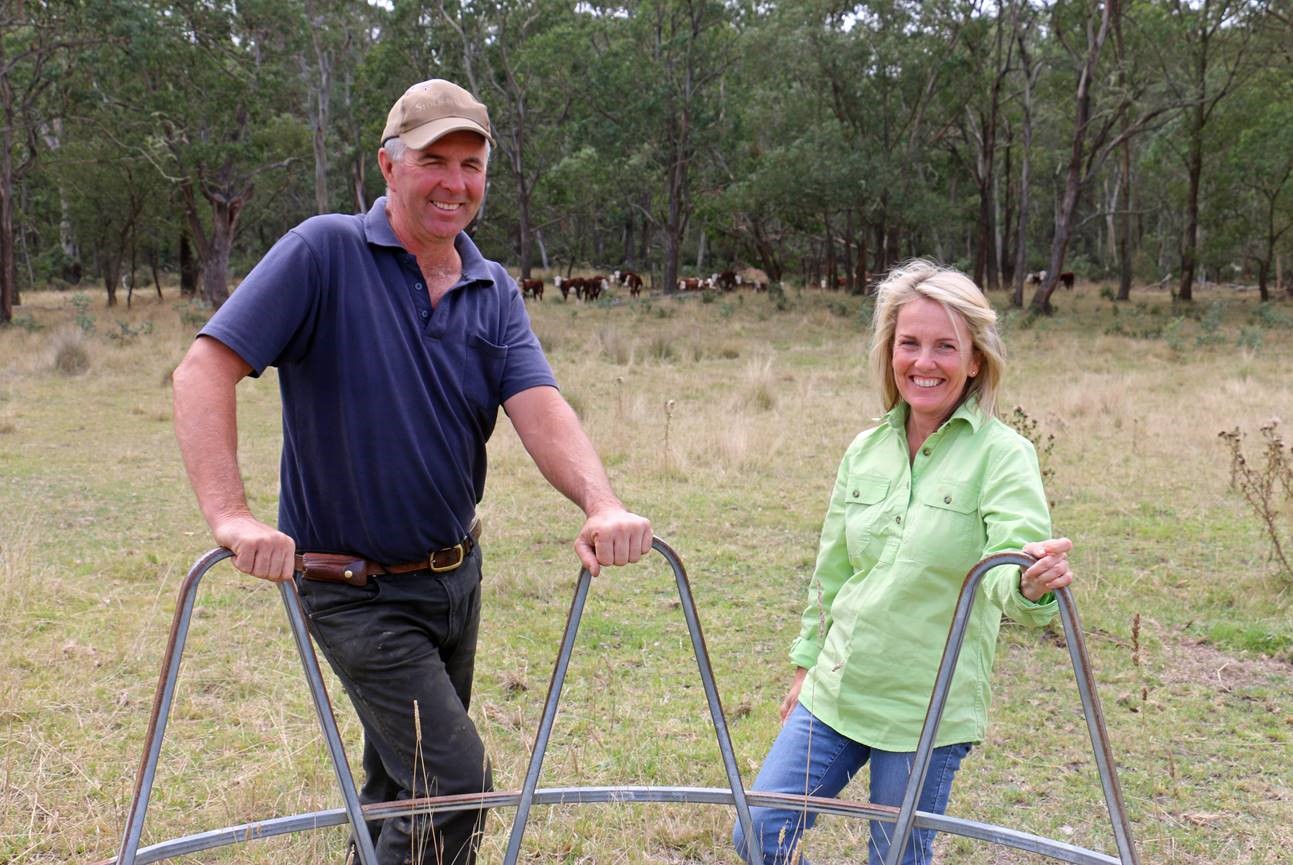 Simon and Sonya Lawlor with their autumn calving heifers running in native bush country of brown and black sallywood and snow gums.