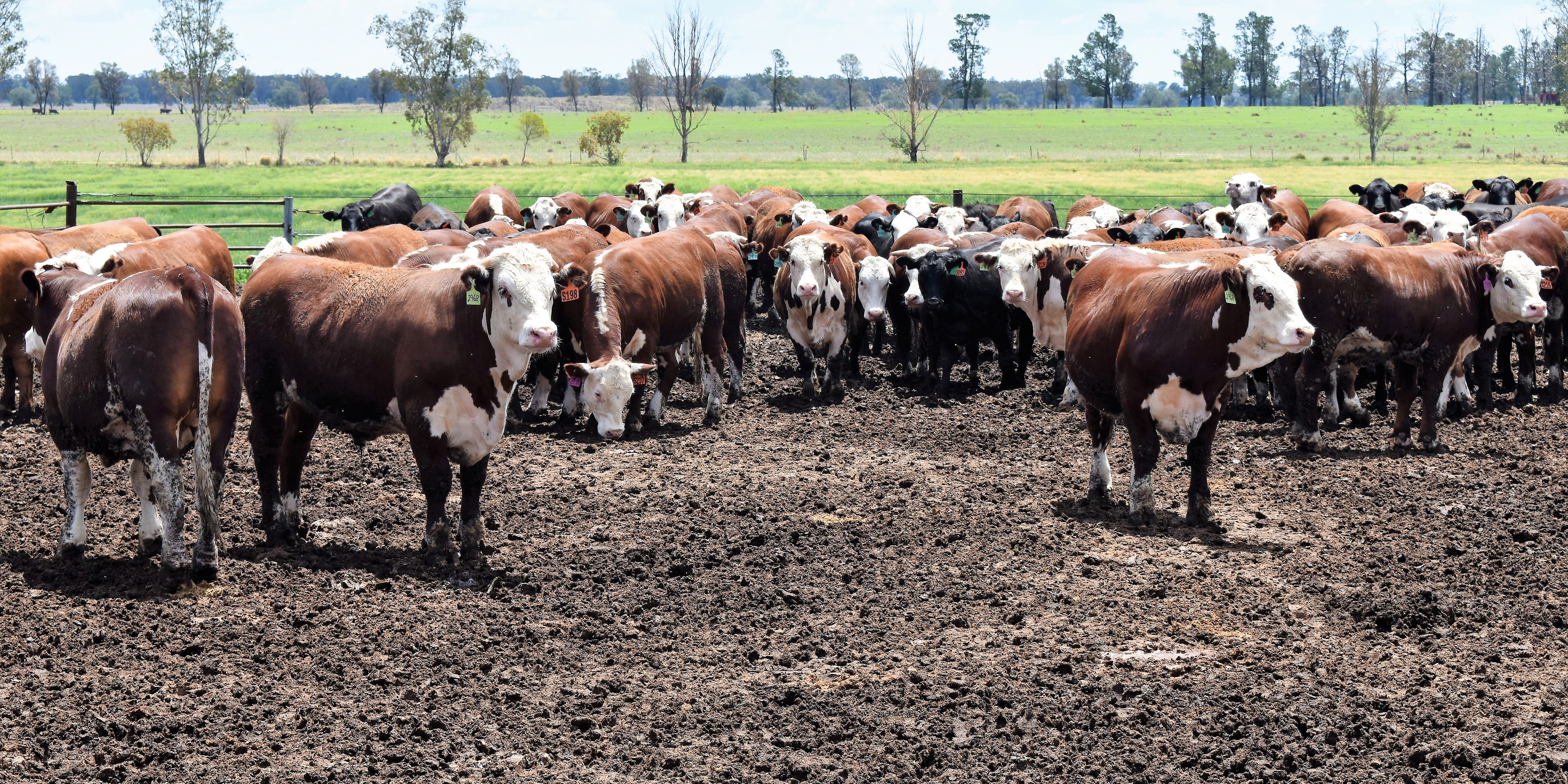 Hereford steers and heifers have been performing well at Wilga feedlot in Bellata, NSW.

Run by the MacCue family, Wilga feedlot turn off approximately 3000 head of cattle per year, predominantly to the Coles domestic market.

Being a smaller, privately owned feedlot, Wilga purchase cattle of various breeds from a range of producers across the region.

The MacCues recently hosted a small group of commercial producers along with Herefords Australia staff and Jeff and Robyn Holcombe of Rayleigh Herefords at the feedlot.

Of particular interest on the day were a pen of predominantly Hereford cattle which came from a number of Hereford seedstock producers.

The pen of steers and heifers had performed well in their time at the feedlot, experiencing minimal health issues.

However, this is often not the case with cattle in feedlots, with Wilga manager Mike MacCue identifying the first month in the feedlot as the most important from a health perspective.

“The first 30 days are critical for cattle in feedlots when it comes to health.” Mr MacCue said.

Proper management prior to cattle entering a feedlot situation can help eliminate many health concerns.

Management practices such as vaccinating, yard weaning, acclimation and backgrounding can help protect cattle from Bovine Respiratory Disease (BRD) and Pestivirus (BVDV), which are some of the biggest health issues for cattle in feedlots.

Due to poorer seasonal conditions experienced across much of Eastern Australia this year many cattle have been entering the feedlot at a lower weight than usual.

According to Mr MacCue, the ideal incoming weight for cattle destined for the domestic market is between 370-380kg.

This enables cattle to reach domestic carcase weight over a minimum number of days on feed.

Hereford and Hereford cross cattle are well suited to this market and seem to do well once established on feed.

This was evident in the pen of cattle seen at the feedlot which over their 82 days on feed had a top daily weight gain (DWG) of 2.7kg and an average DWG of 1.9kg.

The cattle also graded well once they were processed with a top MSA score of 64.9 and average score of 60.2.

Herefords Australia’s Breed Development Manager; Michael Beattie who attended the feedlot visit was pleased that smaller feedlots such as Wilga are embracing the profitability of Herefords in the domestic market.

“It’s rewarding to know that smaller, privately held feedlots are seeing the benefits of the Hereford breed achieving market specifications with minimal days on feed and that our members are supporting these feedlotters like the MacCue Family.” Mr Beattie said.

Mr Beattie also emphasised the necessity for producers to employ good pre-feedlot management to ensure the best outcome for animals and feedlotters.

“One of the more noted take home messages from the day was animal health and the importance of pre-feedlot management. The MacCue family take animal health seriously because there is no upside in feedlot mortality.

“Evidence has shown that when cattle are moved from one environment (often extensive and maybe a different climatic region) into an intensive environment like a feedlot where cattle are penned into larger cohorts, those individuals that have a lower immune system may experience health issues; often respiratory which could lead to pneumonia and even death if not treated in a timely manner.

“To minimize such risks, treating the feeder cattle prior to entry with products such as 5in1, BRD treatment, Multimin, etc. would be advantageous and greatly assist the animals’ wellbeing during the feedlot induction phase.” Mr Beattie said. 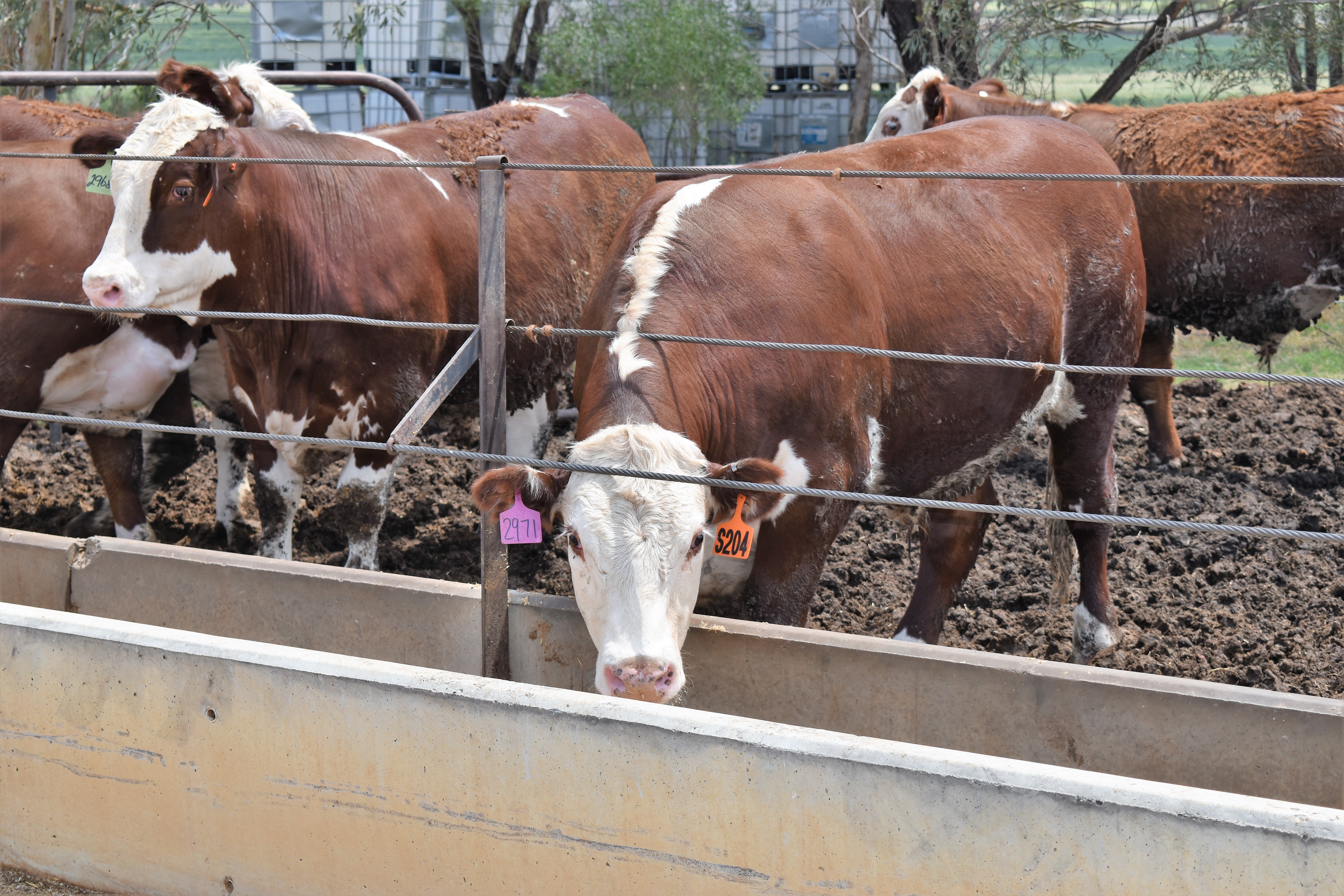 A pen of Hereford cattle fed for 82 days at Wilga feedlot had a top daily weight gain (DWG) of 2.7kg and an average DWG of 1.9kg. 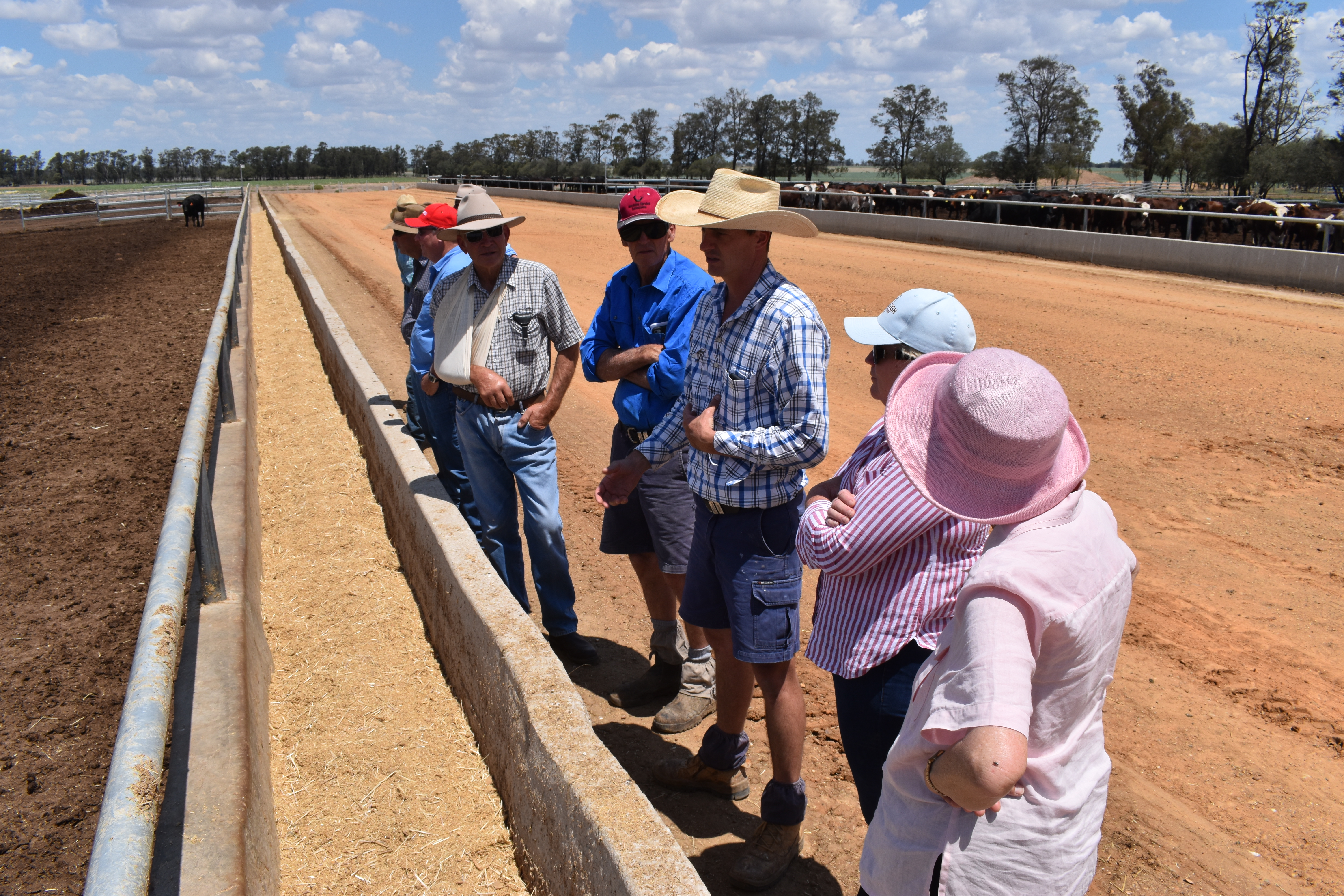 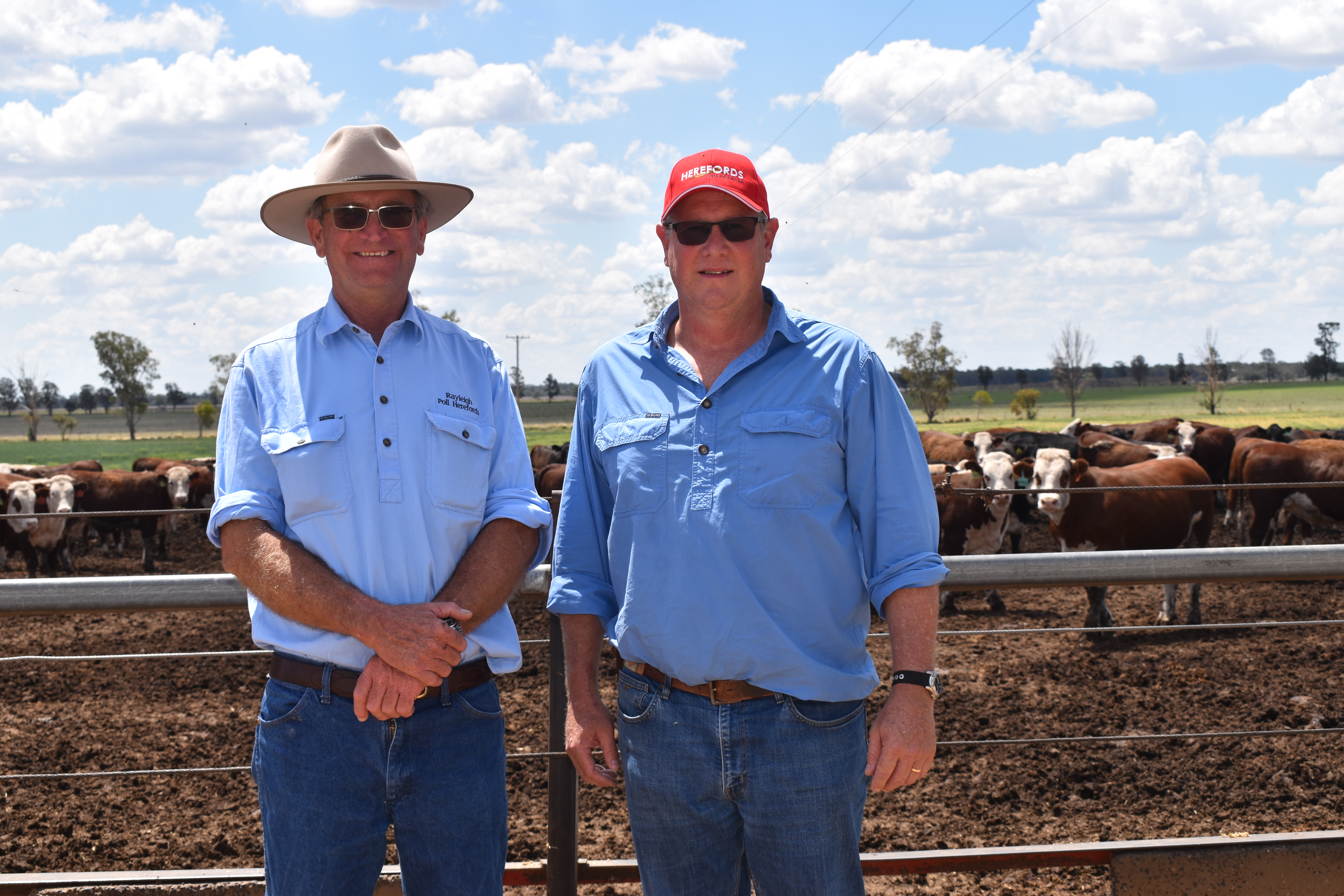 Jeff Holcombe of Rayleigh Herefords and Michael Beattie of Herefords Australia at the Wilga feedlot. 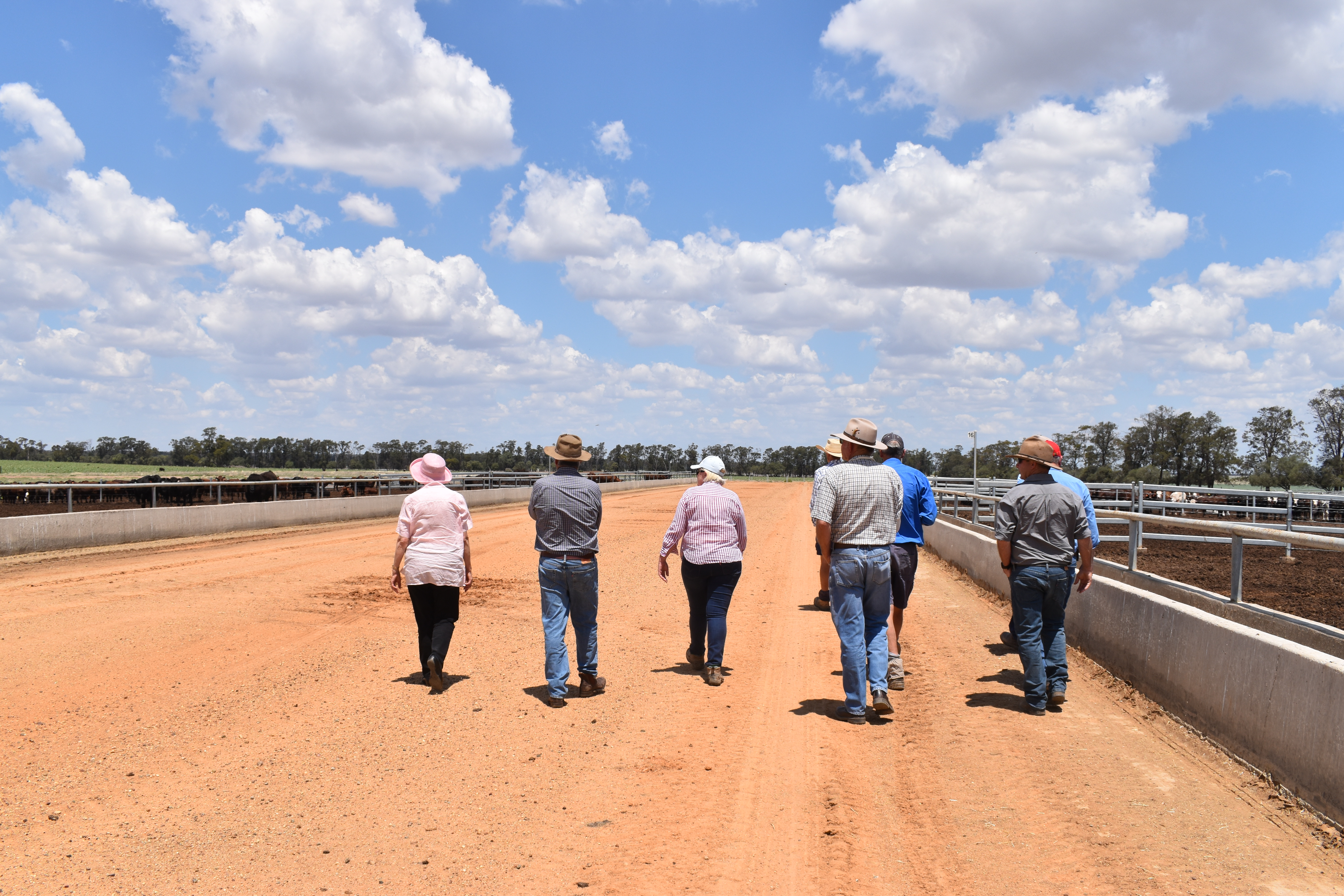 Producers were given an informative tour around the feedlot by the MacCue family.