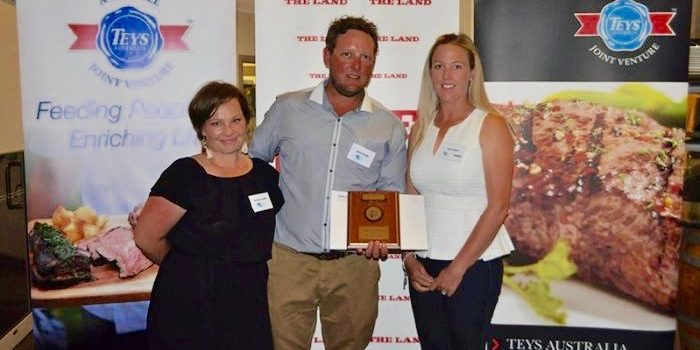 A pen of black baldy steers from Waverly Run in Big Springs NSW have shown the Whiteface advantage by being awarded Reserve Champion pen for feedlot performance in the recent Beef Spectacular Feedback Trial.

The competition is judged in two parts: feedlot performance, and carcase performance, with overall placings awarded at the completion of both sections. The pen of Waverly Run steers owned by James and Jacinda Douglas placed 10th overall out of 100 teams entered in the competition.

Waverly Run first entered their Hereford/Angus cross steers in the Feedback Trial in 2016, but this year’s result is the best they have achieved since first entering.

The Douglas’s have been sourcing their Hereford bulls from the Pearce family’s YavenVale Hereford stud in Adelong for around 12 years.

Waverly Run have continued to include Herefords in their herd for several reasons, primarily their great temperament and ability do well both on farm and in a feedlot situation.

“Herefords are just a pleasure to work with, both in the paddock and in the yards.”  Says Mr Douglas.

While the docility and do-ability of Herefords is a huge bonus, Mr Douglass also selects bulls based on certain EBVs, particularly regarding carcase data.

“When selecting bulls for my herd I tend to look at rib and rump fat EBVs, as well as small birth weights and good growth rates.  I also make sure the bull is structurally sound.” Mr Douglas says.

Selecting bulls based on these traits seems to be a winning combination for Waverly Run given their success in this year’s trial.

Feedback on animal performance is offered from start to finish of the Beef Spectacular Feedback Trial and is highly beneficial to the producers who enter. According to Mr Douglas this feedback is a great incentive for entering:

“We (producers) are provided with information and data from start to finish, which allows you to compare your animals with the other breeds entered. Receiving this feedback also helps to reassure me that I’m on the right track and picking the right values in my bulls.”

This is a fantastic result for the Douglas family and a great example of the benefits and strengths of Hereford genetics.