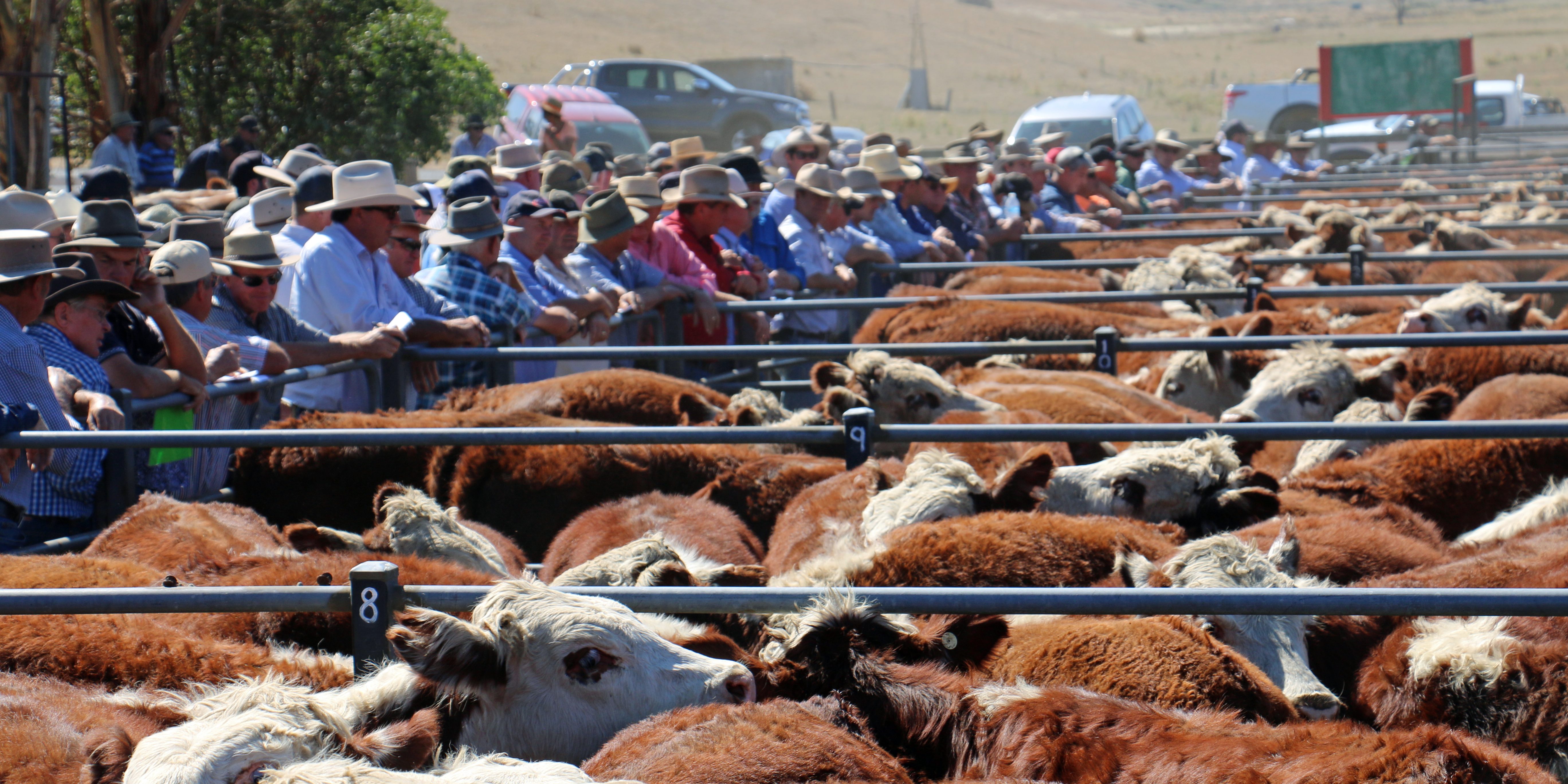 Prices kicked $100 a head for Hereford steer weaners and $165 for restocker heifers as buyers clamoured for cattle at the opening Elders fixture of the 78th Annual Mountain Calf Sales.

A big crowd of buyers and vendors descended on the Benambra yards with selling agents Elders penning 1700 Hereford, Hereford cross and Euro steers and heifers on March 13 for the Benambra Weaner Sale.

Lot feeders competed strongly with restockers in the heifer pens, pushing prices up by $165 on the Benambra Calf Sale, held earlier in the day at Hinnomunjie.

The top purebred price in the grown cattle was $1290 for Hereford steers sold by W J Pendergast and also bought by Alan Mitchell.

As a comparison, the Angus and Angus cross sale at Omeo the same day steers topped at $1160.

The autumn 2017 drop, Mawarra and Sugarloaf Creek blood steers had been weaned for a month and sold for the equal top weaner price of $1200 to South Gippsland steer finisher Graeme Osborne.

David Hill, Elders Omeo, estimated the weight of the catves at 365kg to give an estimated liveweight price of 328c/kg.

The Pendergasts offered 33 steers and 11 heifers, all April-May 2017 drop and weaned onto a rape crop for five weeks.

A fourth generation Hereford breeder, Mr Pendergast was pleased his top pen was in front of his 2016 top price of $1190.

Graeme Osborne snapped up the equal top price Karoonda, Basford and Nunniong blood weaners for $1200 from A & S Pendergast.

“That is a satisfactory result considering the way the season is at the moment,’’ Mr Hill said.

“The middle run sold above expectations considering the cattle didn’t have the weight.

“Due to a dry season in the last month, the cattle are presenting 40-50kg lighter and there is a 15-20 per cent difference in the cattle market compared to 12 months ago.

“In the lighter end, cattle sold for 340-360c/kg. Not many cattle stayed in the EU program.

‘’Graeme Osborne, of South Gippsland, is a return buyer for grass fattening cattle and he bought the lead of the steers.

“A lot of the smaller steers have gone into southern Queensland and northern NSW to people expecting to have cattle for winter supply.

“That rain in southern Queensland certainly helped our sale.’’

Mr Hill said restocker and feeder competition was excellent on the Hereford heifers.

“Not as many heifers returned to the paddock locally as we would have liked due to the unfavourable seasonal conditions.’’

One of the volume buyers out of the two Benambra sales was Justin Keene, Corcoran Parker Wangaratta, sourcing several hundred steers for several north-east backgrounders.

He was after predominantly weaned calves and some accredited cattle for EU programs.

“Those calves will be replacing cattle sold in the late spring or early summer as bullocks for three to four clients,’’ Mr Keene said.

“The sale was a huge difference from last year with those similar cattle making a $1/kg more.

“The whole job is a lot different now with fat cattle down 100c/kg too.

“We thought these calves may have been in store condition today but they are reasonably fresh and solid.’’

Vendors Clive and Di Anderson, Benambra, offered 185 mixed sex calves at the Benambra Weaner Sale, topping at $1160 for steers and $900 for heifers.

The Andersons also offered 300 head across the Omeo Angus sales, with their Herefords outselling their Angus calves, same drop, by $120/head.

“The sale was solid – we are not expecting great money at the moment,’’ he said.

“Our tops made $1450 last year and I didn’t know how this year would pan out due to the dry season, but we had confidence in it.’’

The Andersons run separate herds of Hereford and Angus, and retain the Black Baldy females for joining to Angus.

“Last year the Hereford and Angus calves came out at the same average,’’ Mr Anderson said.

“It is a good mix for us – we keep our top Hereford heifers and join them to low birthweight bulls.’’ Russell and Merilyn Pendergast were thrilled to win the Herefords Australia champion pen at the Benambra Weaner Sale. Dudley Graham, Compton Herefords, Urinso, NSW, was after backgrounding cattle at the Benambra Weaner Sale for lot feeding near the Queensland border. Bob Maddern, Mt Alfred, has switched to Herefords and was after feeder steers or heifers at the Benambra Weaner Sale. A large buying gallery paid to the top of $1200 for autumn drop Hereford weaner steers at the Benambra Weaner Sale. Autumn drop weaner steers kicked $100 a head at the Benambra Weaner Sale on the earlier sale at Hinnomunjie. The Elders team take bids on the champion Hereford pen of steers which made $1200. Hereford calves offered by Clive and Di Anderson, Benambra, sold at rates of $120 above their Angus calves, same drop. Anne and Richard Faithfull sold the tops of their autumn drop weaners, EU accredited, for $1170 at the Benambra Weaner Sale.