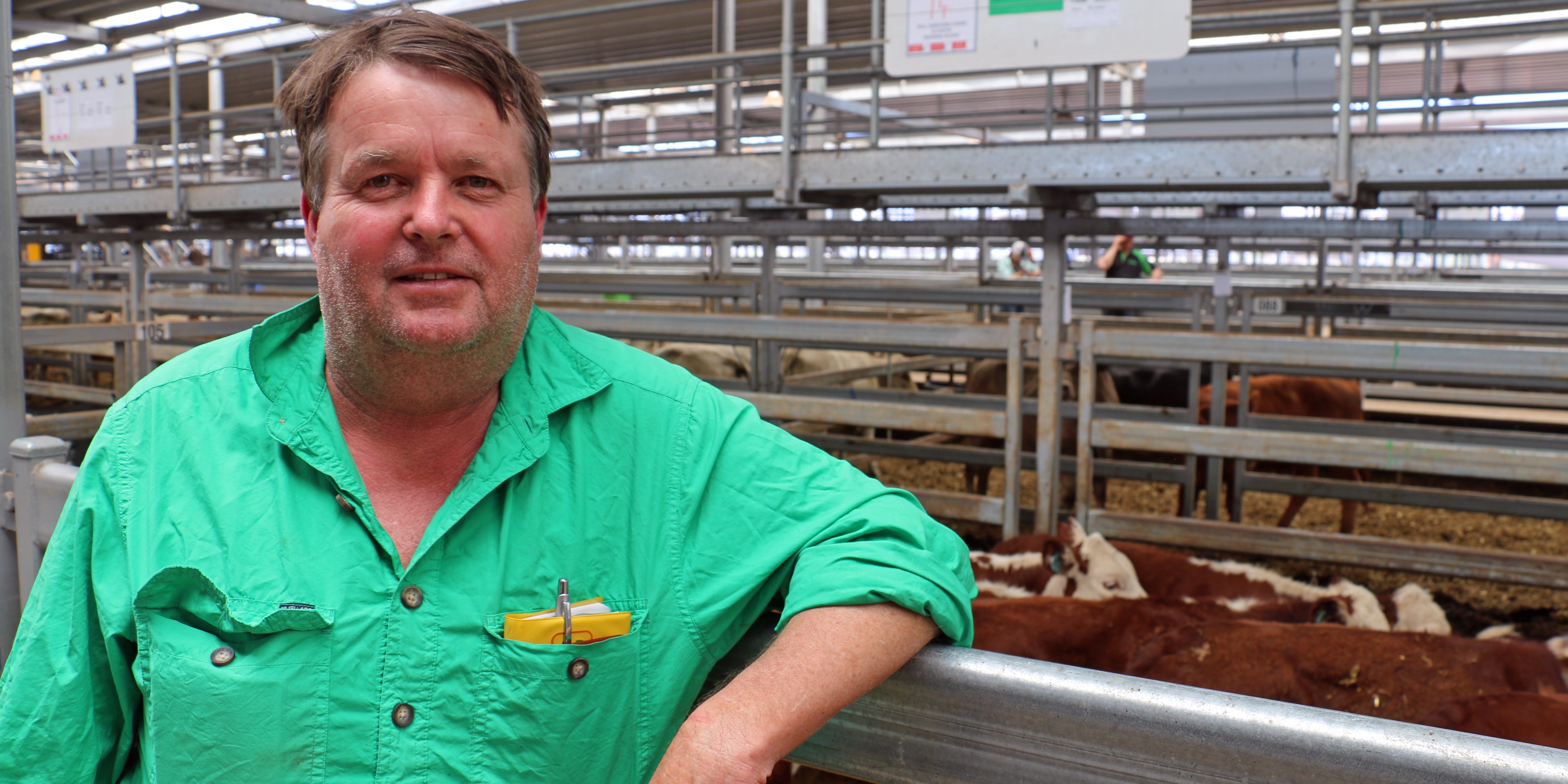 Southern NSW steer finishers were out in force at the Wodonga Premier Hereford and Euro special store cattle sale, paying to 401c/kg for whiteface weaners.

It was the first stand alone weaner sale for the selling agents, Corcoran Parker, Wodonga, with a yarding of 1870 Herefords, Black Baldies and Euro cross steers and heifers.

Topping the purebred offering was Poll Hereford steers, 20-22 months, Lowanna blood and weighing 510kg, from B Hewitt and T Justin, Upper Gundowring, selling for $1440 or 282c/kg.

The pace picked up in the lightweight steers where restockers paid the sales circuit top for Herefords of 401c/kg.
The category sold for 360-401c/kg or $750-$880.

Their pen of Morganvale and Glen Goulburn blood steers, 9-10 months, weighed 375kg, and sold for the top weaner price of $1155 or 308c/kg to Rodwells.

Mr Comerford had expected $1150-$1200 going into the sale.
“Last year our calves topped at $1390 at Wangaratta but we had to expect a market correction -these prices are still sustainable for us,’’ he said.
“Last year’s prices did help us buy a better type of bull.
“I’m looking for length, temperament and eye pigment – the Herefords suit our country.’’

Topping the sale and the weaner sales circuit so far was Tony and Lyndall Bennett, Dromore Station, Wilcannia, with their pen of Injemira blood steers, aged 8-9 months.
The EU accredited steers weighed 188kg and sold for 401c/kg or $755 to grazier Lachie Macleod, of “Fairview’’, Morundah, NSW.
Mr Macleod was restocking after 154mm of rain had resulted in plenty of summer feed.
“I was after 40-50 head at no more than $780 – these cattle will be grown out for the feedlot at Yanco (JBS Australia),’’ he said.
“I have bought Tarabah bred Hereford calves in the past – I like the quiet temperament of the Herefords.’’

Tony Reardon, Brooklyn Pastoral Co, Mansfield, offered 95 steer weaners, aged 9-10 months, and last year topped at $1390.
His top pen of Mawarra and Centennial blood calves, weighing 358kg, sold for $1145 or 319c/kg to Corcoran Parker.
“Herefords have always been good to us with their weight and temperament,’’ Mr Reardon said.

Mike Walsh, Granite Flat Pastoral, Mitta Mitta, offered 28 Hereford and 23 Black Baldy steer weaners, aged 9-10 months, as well as 37 Hereford-cross heifers.
Mr Walsh said a poor winter and spring had resulted in liveweights being 20kg less than average.
“The market is 150c/kg down on last year but I couldn’t see how the prices could continue and there had to be a correction,’’ he said.

The top pen of Granite Flat Hereford steers made 327c/kg while the Black Baldies made 320c/kg.

Corcoran Parker auctioneer Justin Keane said the sale was consistent on a cents per kilogram with the previous week’s Angus sale and the western district circuit sales.

Mr Keane said the majority of cattle were bought by local steer finishers who had sold bullocks pre-Christmas.
“These people want the first pick of the breeders calves so they can have a proper bullock out the other end,’’ he said.
“Landmark International were active again while restockers from the Riverina with a fresh pick of grass were replacing stock.’’

Mr Keane said lighter weight calves were sought by buyers who had recently sold feeder cattle for $1300-$1400.
“There was plenty of competition in that $800-$900 bracket,’’ he said.
“The calves over 400c/kg were a hell of a result for the person selling them but it was still a dollar amount people can operate at.
“And, 300c/kg on those heavy cattle getting up over $1200 is still a fantastic result.
“Feeder competition on the heifers has gotten stronger, with many making 280c/kg – that’s as good as anywhere in the last 10 days.
“When there are thousands of cattle being sold in Victoria in the first two weeks (of January), everyone is trying to find where they can get the best value.’’ From left, Mandy Farrington, Tom and Cherrie Walsh, and Cindy Walsh, all of Granite Flat Pastoral Company, Mitta, in to see the prices at the Premier Hereford special store cattle sale at Wodonga. Ged Comerford, Mansfield, was pleased to win the champion pen with his 9-10 month-old Poll Hereford steers. They sold to Rodwells for $1155 or 308c/kg. Shelley and Ged Comerford, Mansfield, with their Herefords Australia sponsored sash for the champion pen of steers. Grazier Lachie Macleod, “Fairview’’, Morundah, paid the top price so far on the weaner sales circuit of 401c/kg for Hereford steers at Wodonga on Wednesday. He bought Injemira blood steers, 8-9 months, from Tony and Lyndall Bennett, Dromore, Wilcannia, for $755 to finish to feeder weights.