A new benchmark was set when Hereford heifers sizzled at the opening Elders fixture of the 77th Annual Mountain Calf Sales with prices reaching a scorching $1510.

A big crowd of buyers and vendors descended on the Benambra yards with selling agents Elders penning 2000 Hereford and Hereford cross steers and heifers on March 14.

Vendors were left smiling as they reported averages for their steer and heifer offerings up as much as $300 on last year.

Lot feeders competed strongly with restockers in the heifer pens, pushing prices beyond $950 on the bigger lines.

The opening pen of 14 Hereford steers, European Union accredited and April-May drop, was sold by Kelvin and Jackie Pendergast, Benambra, for the top purebred price of $1550 to local steer finisher Paul Pendergast.

Ray and Max Pendergast, Benambra, snared the top price of $1510 in the heifers, a new benchmark for the fixture.

Hereford steers sold for $850 to a top of $1550 – a rise of $165 for the purebreds on the Benambra Calf Sale held earlier in the day at Hinnomunjie.

As a comparison, the Angus and Angus cross sale at Omeo the same day steers topped at $1530.

The July drop, Karoonda blood steers had been weaned for a month and sold for $1450 to South Gippsland steer finisher Graeme Osborne.

The Andersons offered 500 head across the Benambra and Omeo Angus sales, with their Herefords outselling their Angus calves, same drop, by $30/head.

“Ideally today we are looking for feeder cattle weighing 380-400kg but there is not a lot so we have widened the specs to 350kg and over,’’ he said.

“They will be fed in a feedlot in Victoria – there is plenty of competition from agents and producers today.’’

Bairnsdale truck driver Donald Betts was not on hand at the sale to see his Shorthorn-Hereford cross steers ring the bell at the market top of $1610.

The pen of nine August-September drop steers had been finished on country at Omeo.

In the heifer pens, Robert Newnham, Longford, rewrote the record books by paying $1510 for 11 EU accredited heifers from Ray and Max Pendergast, Benambra.

This eclipsed the previous record of $1200 set at last year’s sale.

“Our previous best price here was $1120 last year so this blew us out of the water, especially when bidding started below $1000,’’ Max Pendergast said.

“It’s been a long time coming and it’s good when it does come.’’

A repeat buyer on the Pendergast heifers, Mr Newnham will join the females to an Angus bull for the Black Baldy market.

“I like the Herefords for their temperament – I have bought these heifers over the years and they have grown out well.’’

Richard and Anne Faithfull, Benambra, were pleased to have their top pen sell for $160 above last year’s price. They sold 91 steers and 47 heifers.

“The sale was strong at Benambra in the morning and we were prepared to meet the market,’’ Mr Faithfull said.

Mr Hill said 80 per cent of the cattle sold into a 300km radius of Benambra.

“We had a satisfactory result on a cents per kilo basis on the weight of the cattle we offered,’’ he said.

“A lot of cattle went into South Gippsland and Korrumburra, there were buyers from as far north as Forbes and we also had processors and feedlots from south east South Australia.

“The averages in the early weaner sales were up $200 and our vendors weren’t expecting that so they’re quite satisfied. 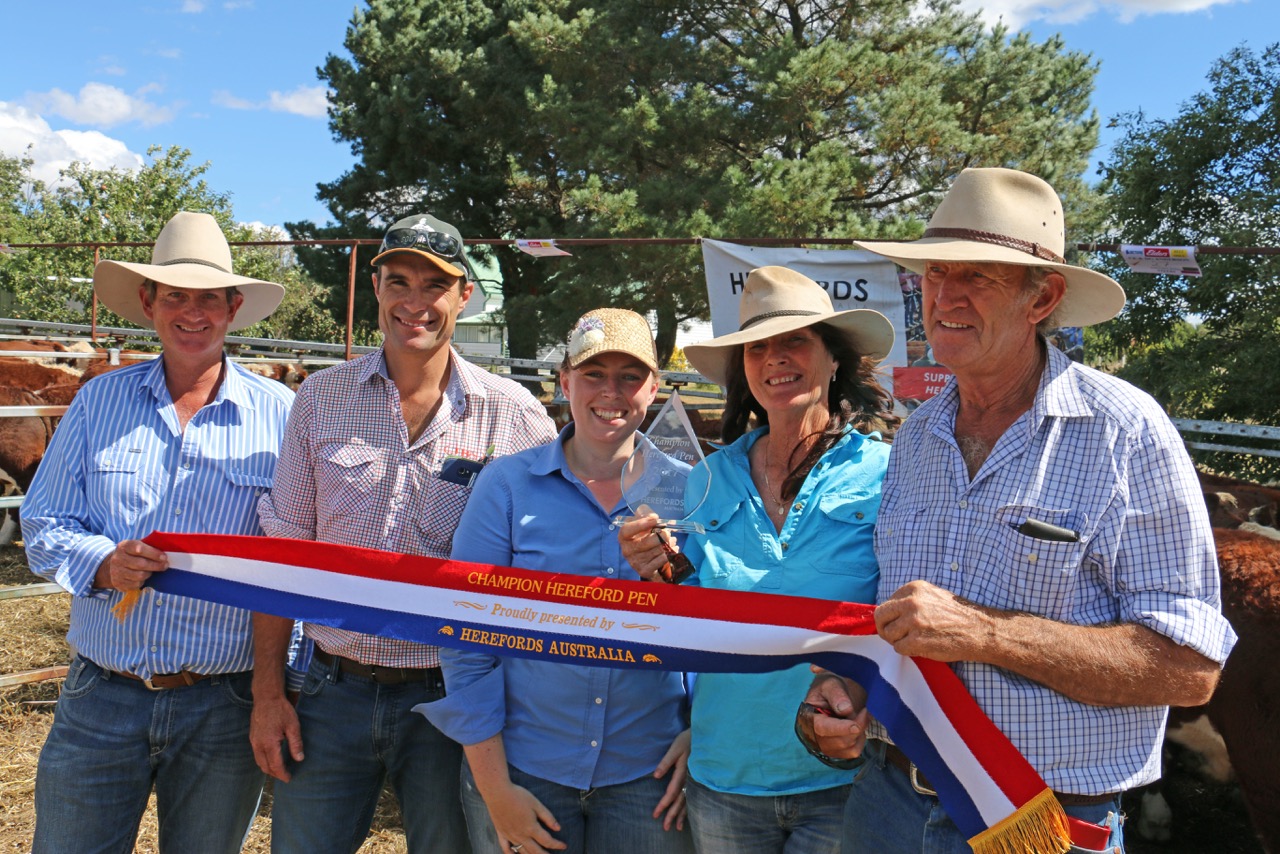 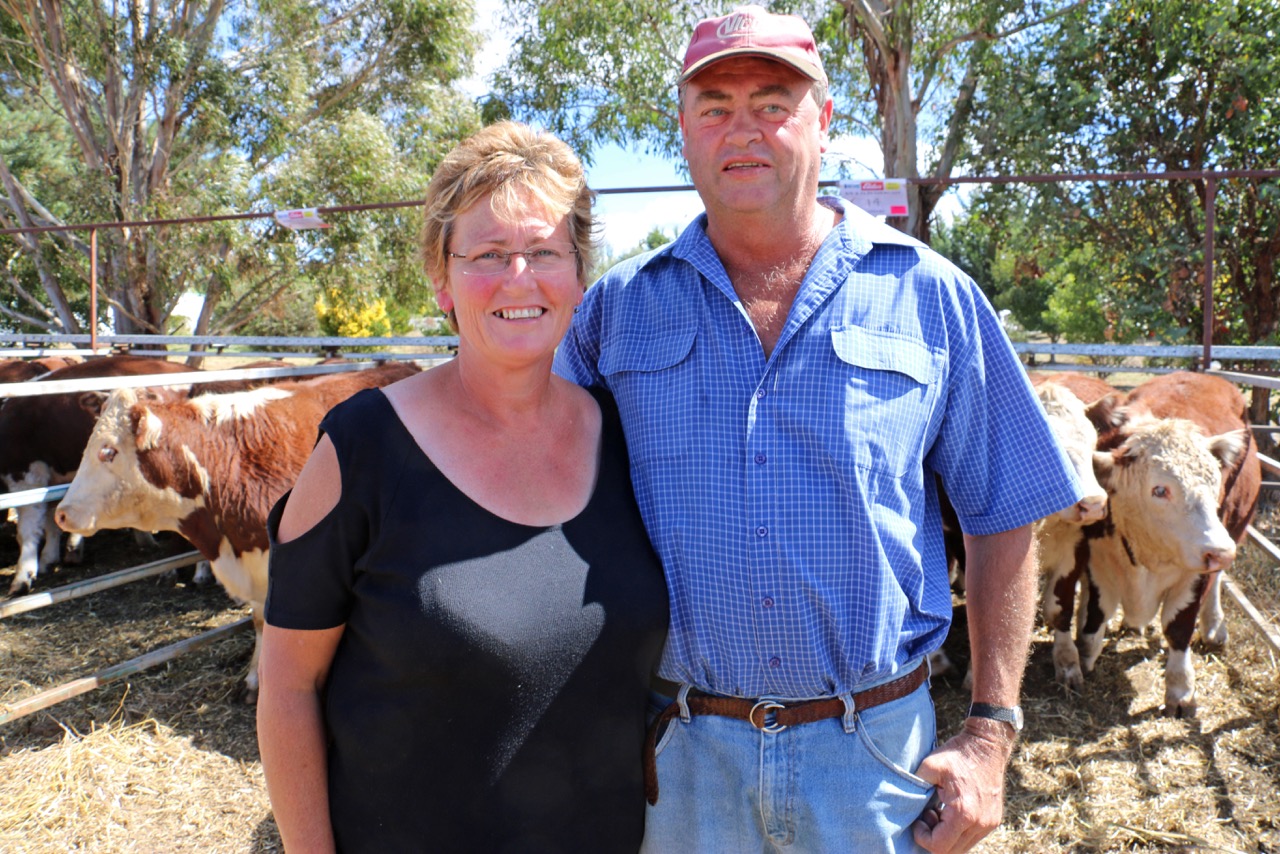 Jackie and Kelvin Pendergast, Benambra, with their opening pen of EU accredited Hereford steers which sold for $1550 to local steer finisher Paul Pendergast. 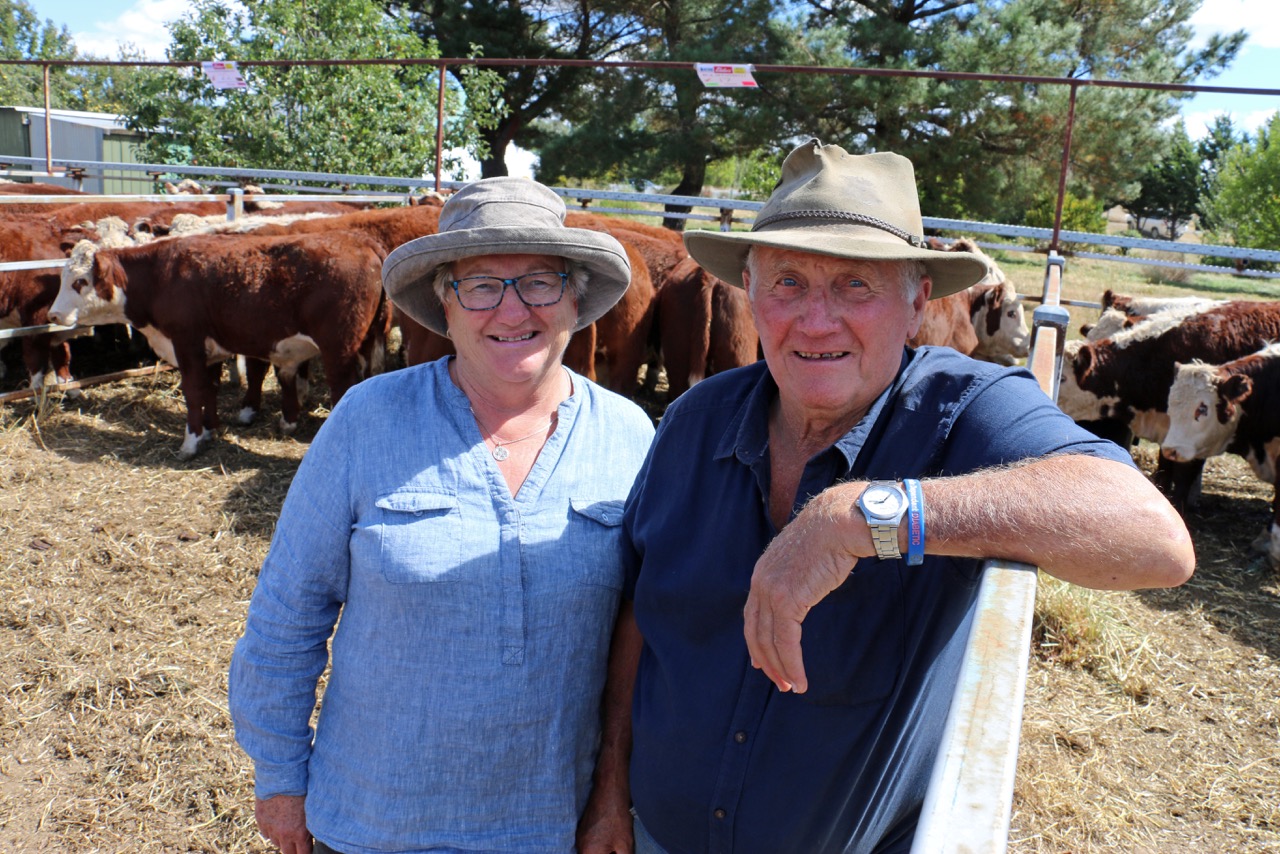 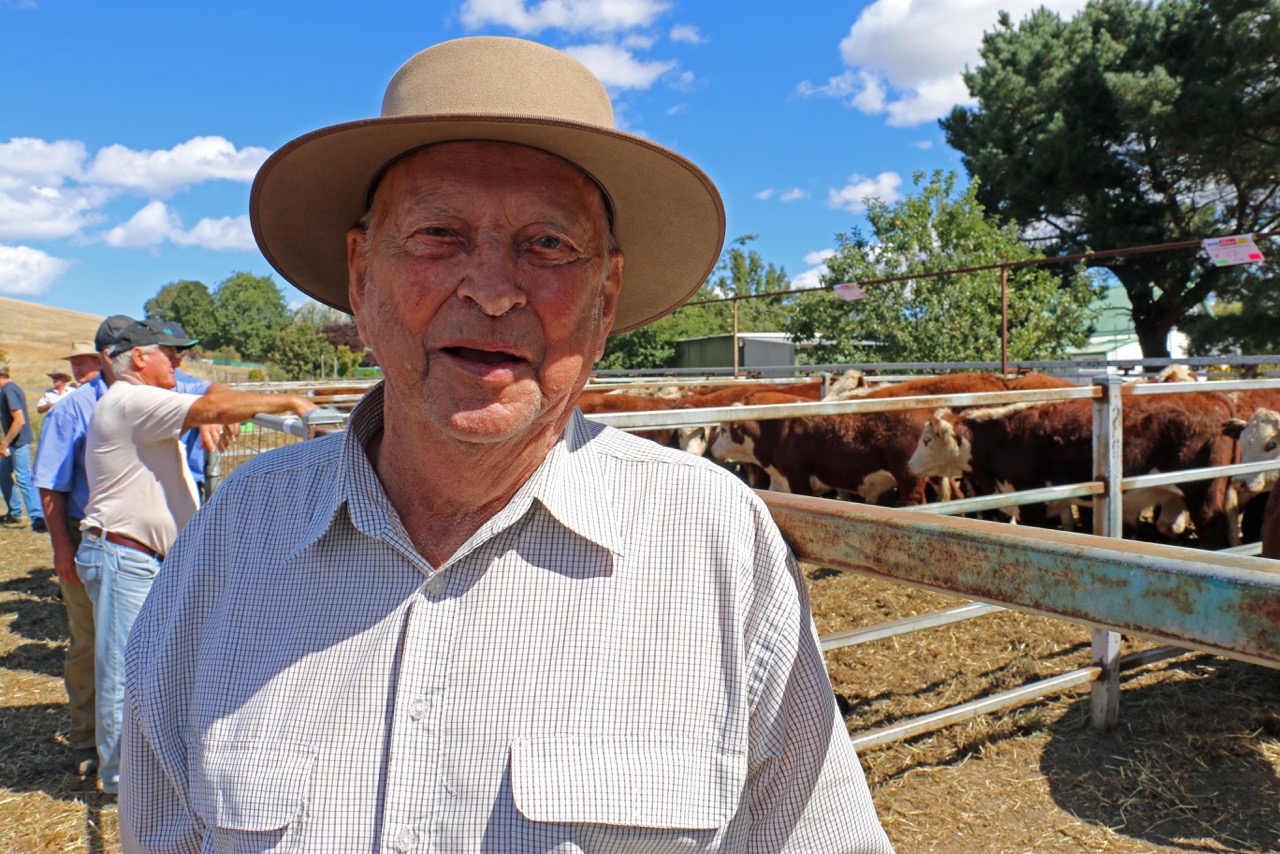 Jack Pedersen, Basford Herefords, Stratford, was among the crowd at the Benambra Weaner Sale. Steers of his bloodline topped the Hinnomunjie sale earlier in the day. 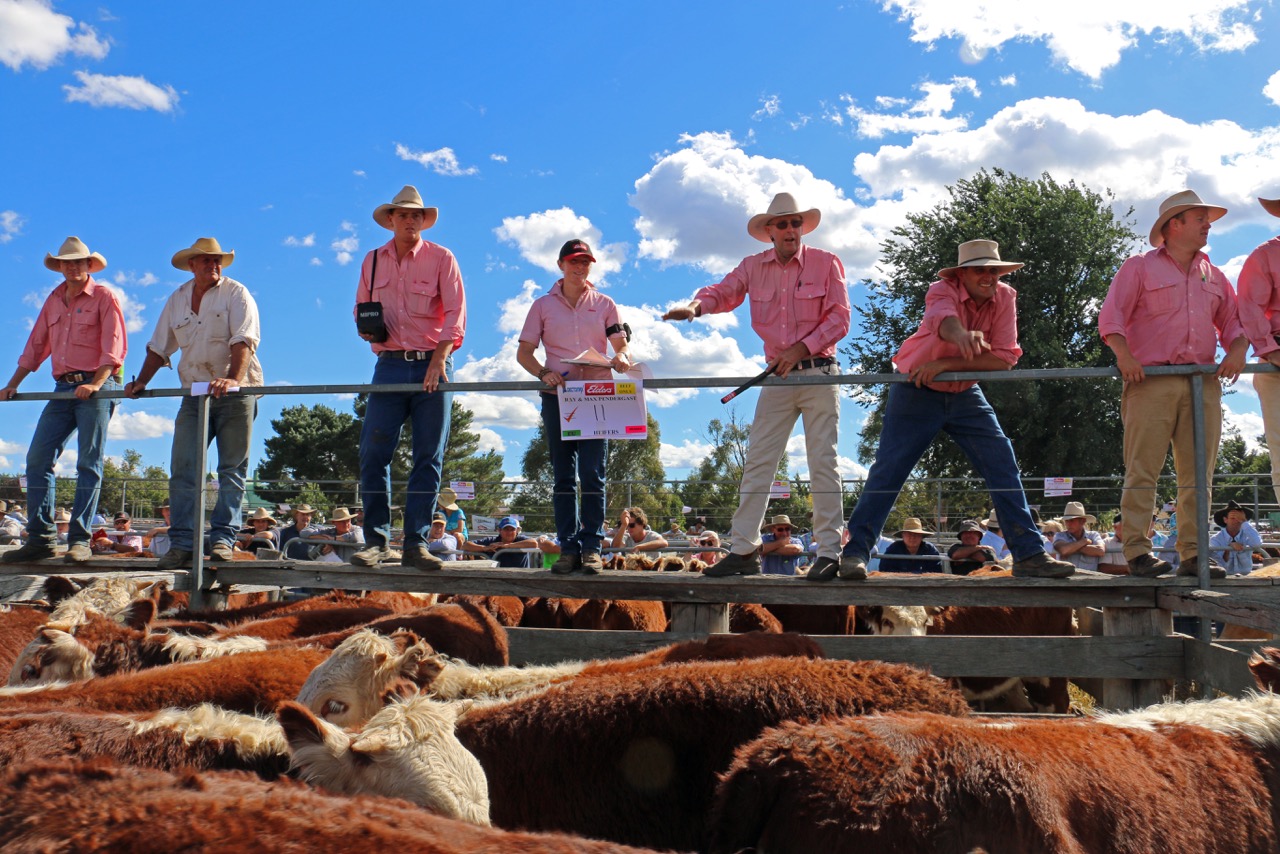 Bids fly on the top price pen of heifers, setting a new record price of $1510 at the Benambra Weaner Sale.