Bidding stepped up a gear on the second day of the 77th annual Mountain Calf Sales to set a new top price of $1640 for steers and $1240 for heifers at Ensay.

Selling agents Elders yarded 1400 Hereford and Hereford-cross yearling and weaner steers and heifers for the sale on March 15.

Prices in the first 20 steer pens did not dip below $1300 as backgrounders, steer finishers and lot feeders jockeyed for lines of the vendor bred calves.

“We had a few northern orders for the lighter cattle from Holbrook and the Ovens Valley but predominantly the heavy cattle went to a big order from repeat buyer Graeme Osborne,’’ Mr Davies said.

“The heavier steers at the front returned 385-405c/kg – quite a few buyers from King Island and Roger Tweddle, Alex Scott & Staff, Warragul, absorbed those good cattle in the front lane.

“The power was with Gippsland with the feedlotters behind.

“The middle run were around 400c/kg all the way through.’’

Mr Ronalds said the steers exhibited a quiet temperament, length, eveness, were true to type and suited either the grass fed or feedlot market.

“It was well deserved and the cattle are a credit to Warren,’’ he said.

The pen of 17 Mundook, Karoonda, Mawarra and Valley Vista blood steers were estimated to weigh 370-380kg and were bought for $1480 by Doug Collins, King Angus Beef, King Island.

The February-March drop steers were weaned in February onto pasture, silage and hand picked sweet corn.

“The Herefords ability to do well in the tougher years is a big feature,’’ Mr McCole said.

Ringing the bell with the top price of $1640 was Evan and Dot Newcomen, Ensay.

“We topped at $1420 last year and anything above that was a bonus this year,’’ Mr Geehman said.

Their seconds sold to Rodwells Pakenham for $1550.

Her lightweight weaners sold to Alex Scott & Staff for $1240 or an estimated 539c/kg.

“We had drafted those steers off but decided to include them due to the dry season,’’ Mrs Gray said.

Barry and Topsy Newcomen sold Shorthorn-Hereford steers to a top of $1540 and had weighed a sample to give an average of 415kg, equating to 371c/kg.

Their top price was a rise of $140 on last year. The cattle had been finished on silage and cubes.

Topping the heifers was Evan and Dot Newcomen with a pen of 16 Shorthorn-Hereford females.

Evan and Dot offered 139 steers and 73 heifers with 75 heifers retained in the herd.

“I’m very happy with the prices – you would need to be,’’ Evan said.

Steers he paid $1400 for at the Ensay sale last year are now weighing 650-700kg after an average daily gain of 1kg over winter.

“I like to buy the biggest steers for the cheapest money and am looking for around 380kg plus,’’ Mr Angliss said.

“The heavier cattle will do a little better in per kilogram per hectare per week.

“In my trials, the purebred Herefords have out performed the Shorthorn-Hereford cross in weight gain.

“The crossbred cattle look softer and heavier but the scales will tell you the answer.’’ 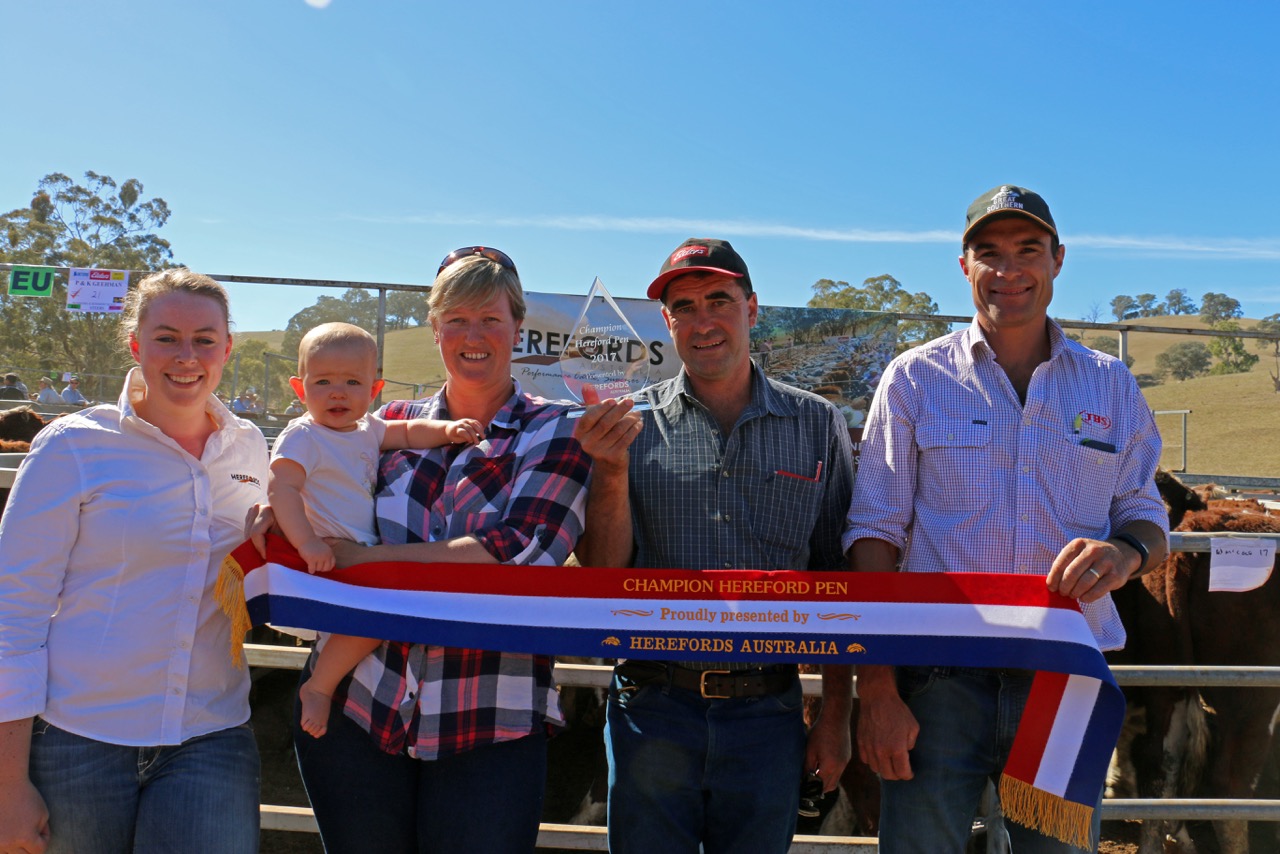 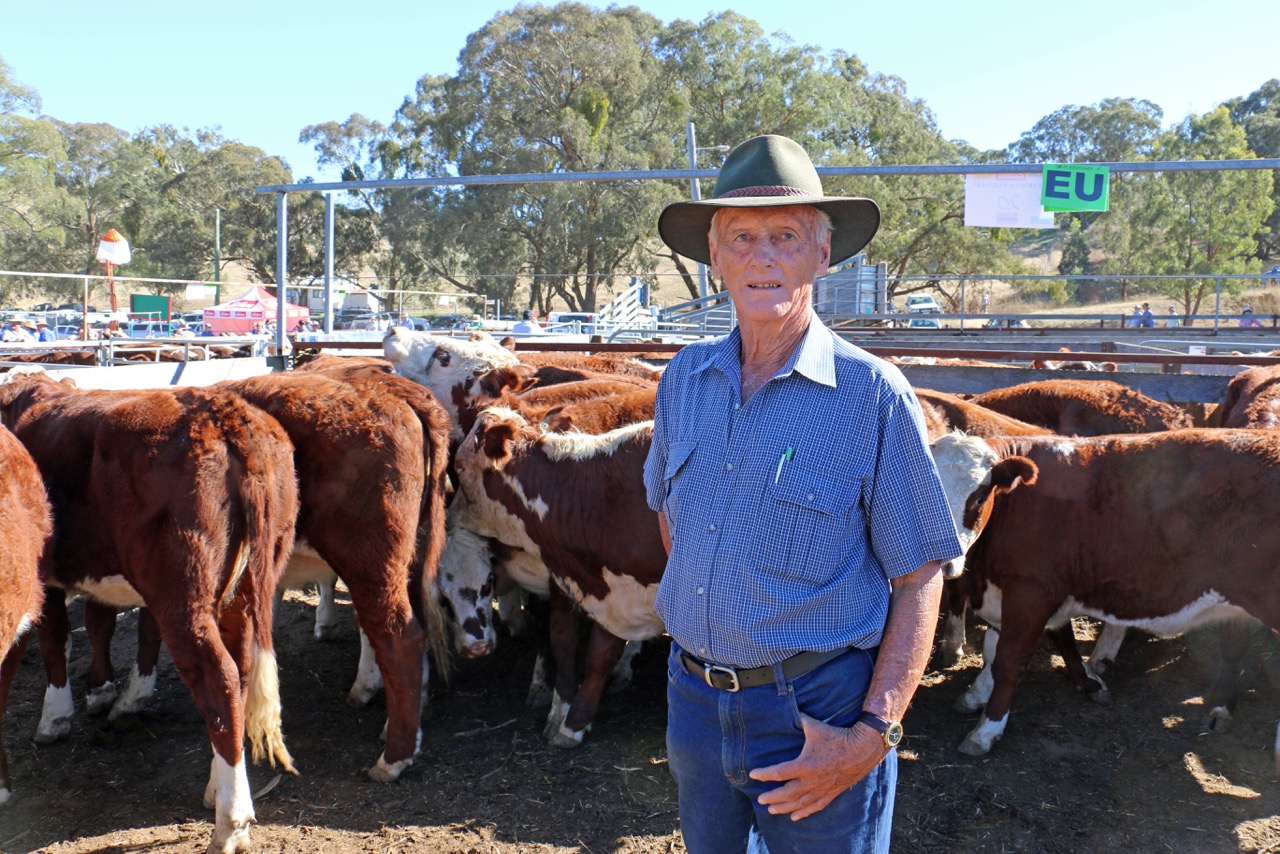 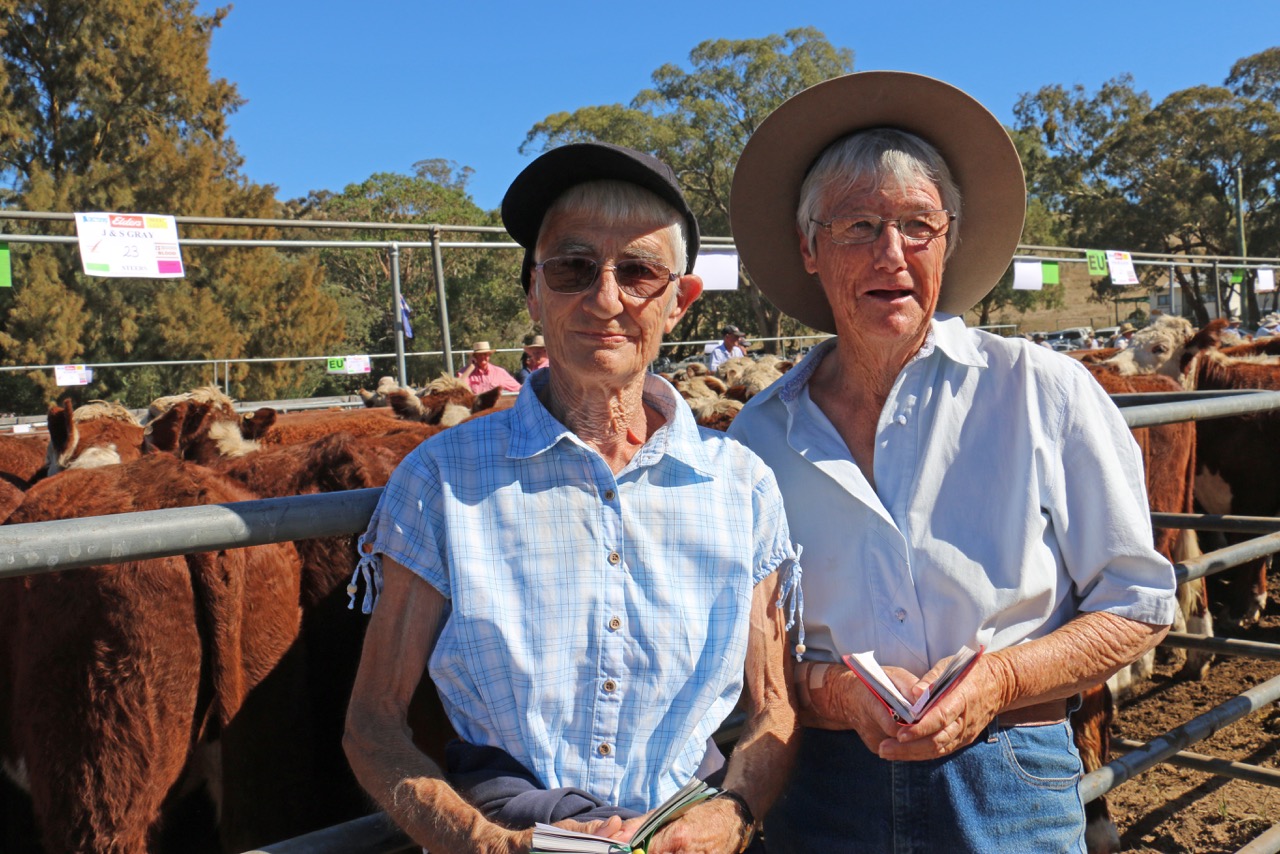 Sue Gray and Jean Geehman, both of Ensay, caught up at the weaner sale. Sue sold lightweight Hereford steers to over 500c/kg. 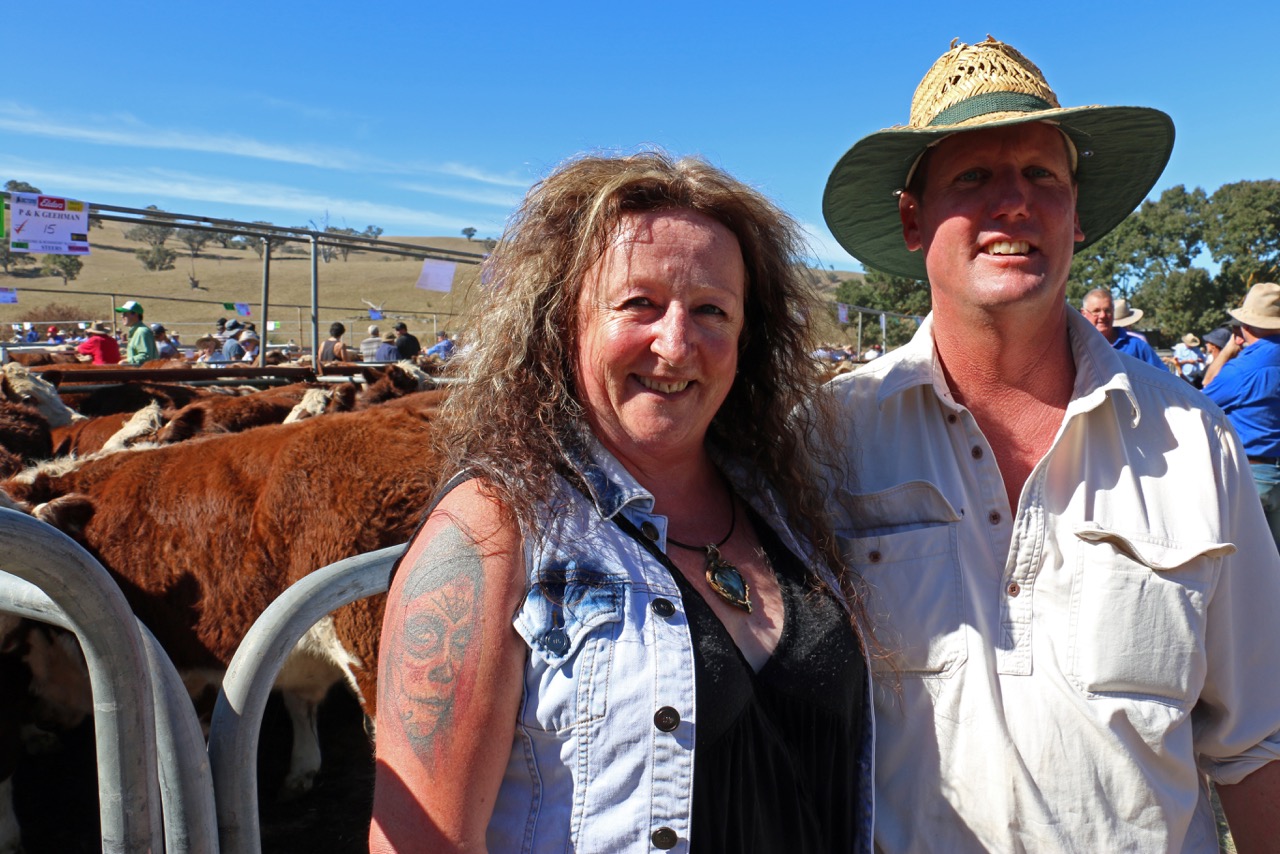 Kerry and Phil Geehman, Ensay, sold 56 Nunniong and Bowmont blood Hereford steers to a top of $1550. 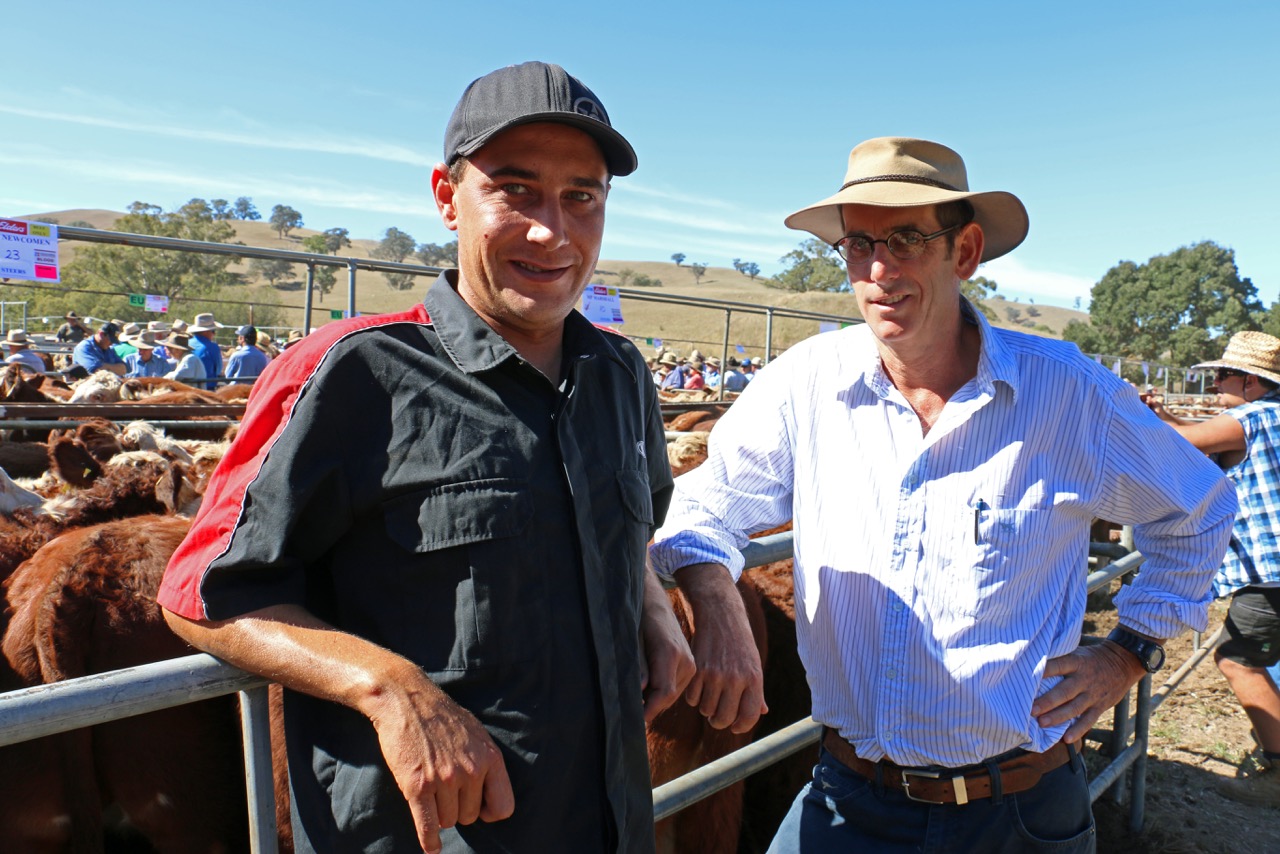 Leonard Stanton and Reece Newcomen, Ensay, sold this pen of Birdsy and Newcomen blood steers for $1350 at the Ensay Weaner Sale. 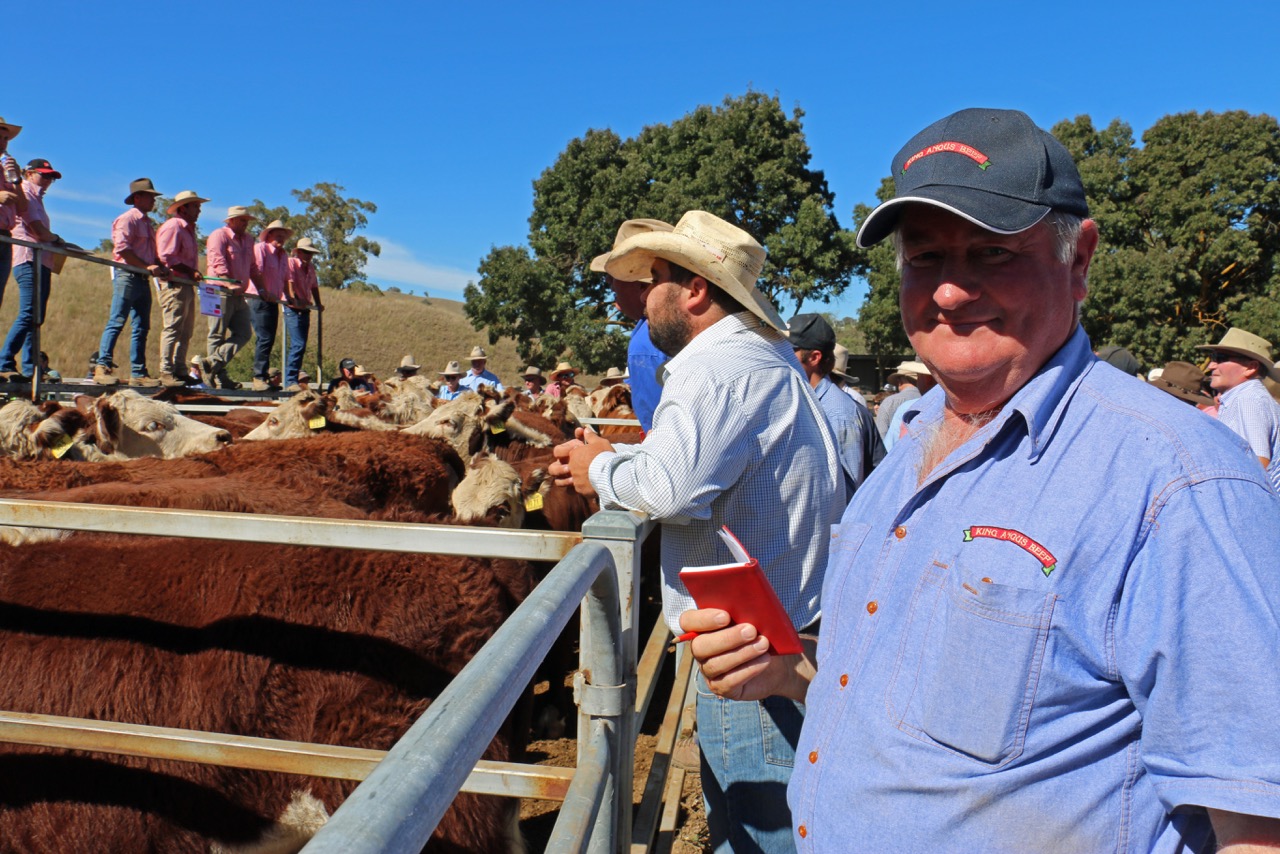 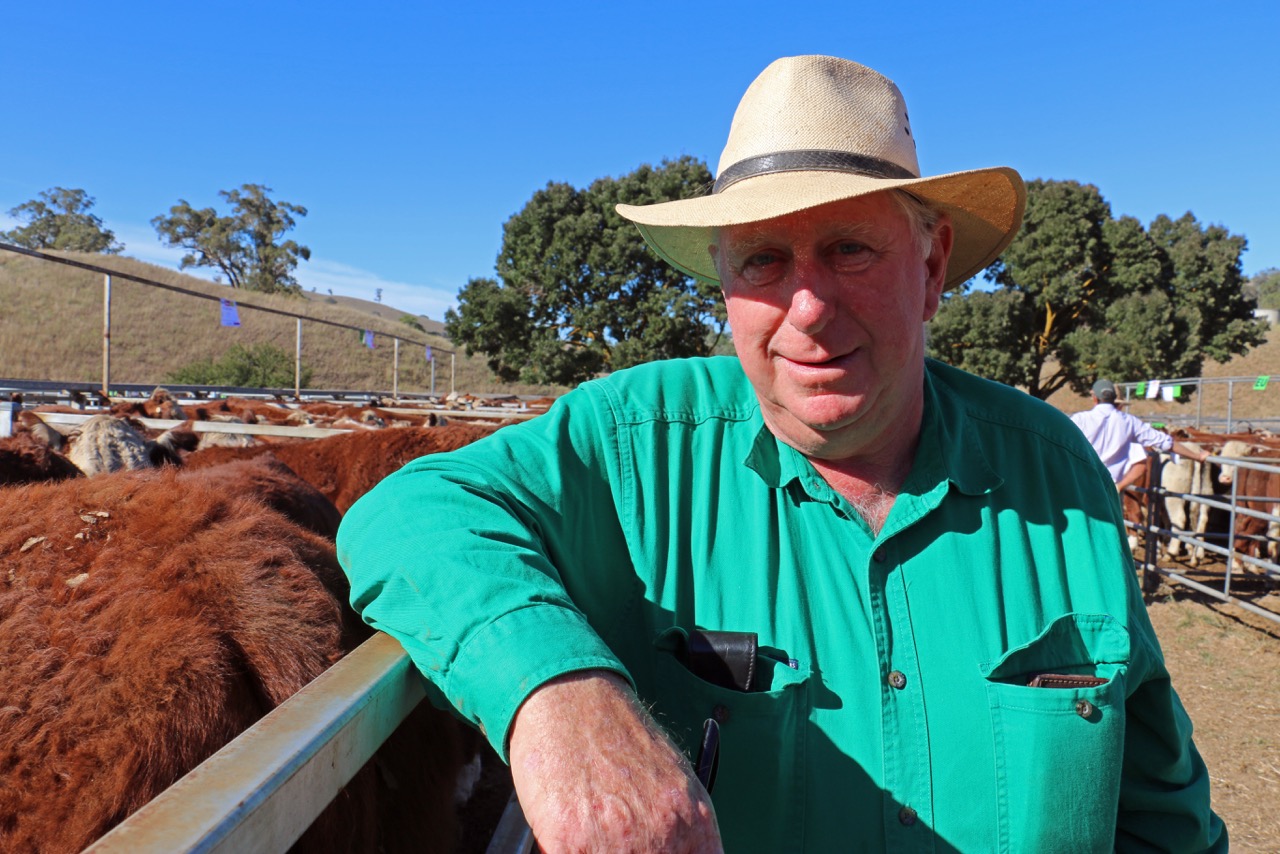 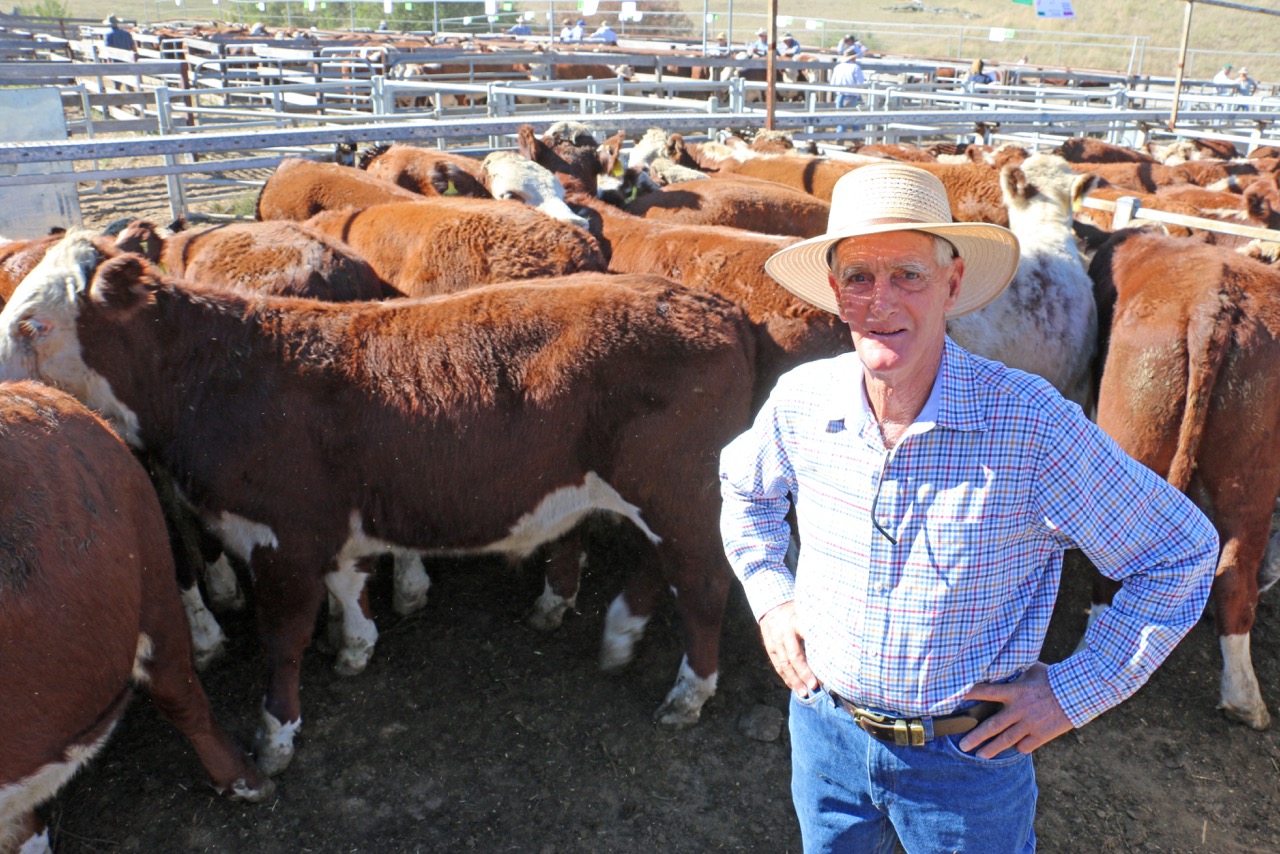 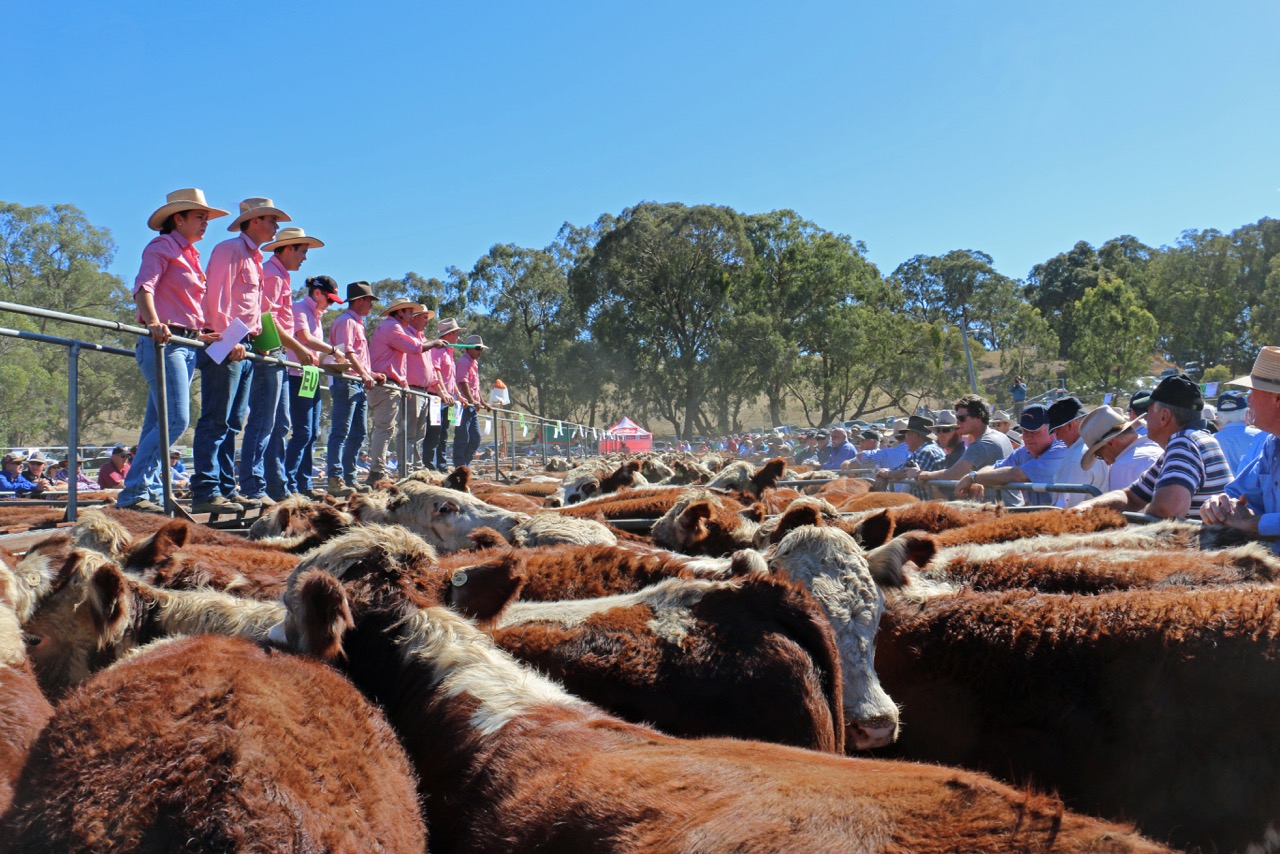 A big gallery of buyers set a new record top of $1640 for steers at the Ensay Weaner Sale.