Hamilton Independent Agents yarded 1651 Hereford and Hereford cross steers, with the market kicking by up to 10c/kg or $185 a head for the heavier pens on yesterday’s Casterton weaner sale.

With intense bidding pressure from lot feeders, grass finishers and backgrounders from the start, cattle weighing 300kg and above did not dip below $1100.

As an indicator, the Angus sale at Hamilton the previous day averaged 388c/kg across the yarding, and 402c/kg for autumn-drop weaners weighing 280-360kg.

The whiteface buying charge was led by Thomas Foods International, securing the first four pens of heavy steers to a top of $1580.

The opening pen of Mt Difficult and Bowmont blood, offered by Stephen Beaton, were EU accredited, weighed 433kg, and bought by TFI for 365c/kg or the overall top price of $1580.

The pen had been judged the Herefords Australia champion pen by Dion Brook, Eloora Shorthorns, Cavendish.

“It wouldn’t matter what colour the cattle are here today, they are excellent, well presented, docile and weaned,’’ he said.

Stephen Beaton also took out the best presented pen with his seconds weighing 387kg, EU accredited, and selling to Landmark Leongatha for 377c/kg or $1458.

Second top price of the day went to Leon and Sally Wheeler, Wallacedale, with their Shorthorn-Hereford cross steers, 377kg and EU accredited, selling to steer finisher Paul Mason, Wellington, NSW, for 413c/kg or $1557.

Mr Wheeler said weaning had been late due to hay production but he was happy with the weights being 10kg up across his consignment of 202 steers.

Mr Malseed said the good season had benefitted his consignment of 186 steers.

“It was great to see JBS Australia putting a floor in the sale.

“It wasn’t that long ago we were receiving 200c/kg and considered that a lot of money.’’

Travis Beaton, Giant Rock Partnership, Wontong Vale, offered 110 steers and was pleased to sell his top pen of steers, 391kg, for $1446 to TFI, with the lightweights up to 406c/kg.

“This is our annual turn off and last year we received in the mid 360c/kg,’’ he said.

“The weight of the tops is brilliant at 391kg – they are March-April drop and finished on grass only.

“Dad was hoping to get 360c/kg so anything above that was a bonus.

“There won’t be too many people leaving the sale disappointed today.’’

Marcus Winter-Cooke, and his daughter Alice, of “Murndal’’, Hamilton, attended the sale to see their top pen of Yarram Park blood steers, 420kg, and EU accredited, sell for $1533.

“The cattle have never been heavier, prices dearer and us happier,’’ Mr Winter-Cooke said.

He said the positive prices over the last 18 months coupled with the resurgence of the beef industry resulted in strong signals to increase production.

On a cents per kilogram basis, the top price of 428c/kg was paid by Southern Grampians Livestock for a pen of 17 steers, weighing 198kg, offered by Farena.

Mr Emms generally paid over 400c/kg for steers under 300kg to finish on grass on the NSW central tablelands.

Bernie Grant, LMB Linke Livestock auctioneer, described the sale as solid and equal to the Angus sale on some select lots.

“A lot of those cattle were bought to finish for the grass fed heavy steer of 500-600kg, and a good percentage will stay in the EU system.’’ 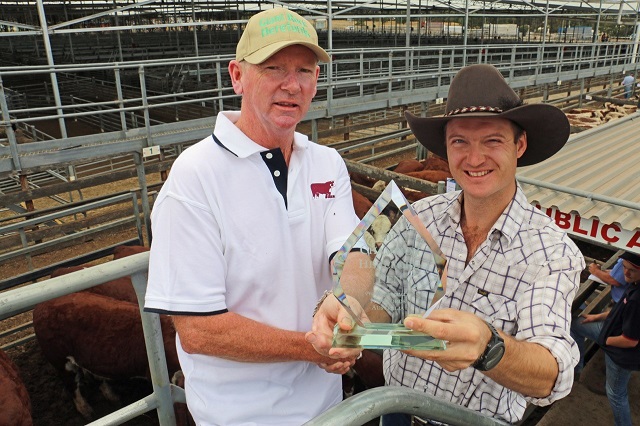 Paul and Carolyn Malseed, with their daughter Hayley, Breakaway Creek, with their Yarram Park blood steers, 349kg, and EU accredited, which sold for 391c/kg or $1364 at the Hamilton Hereford feature weaner sale. 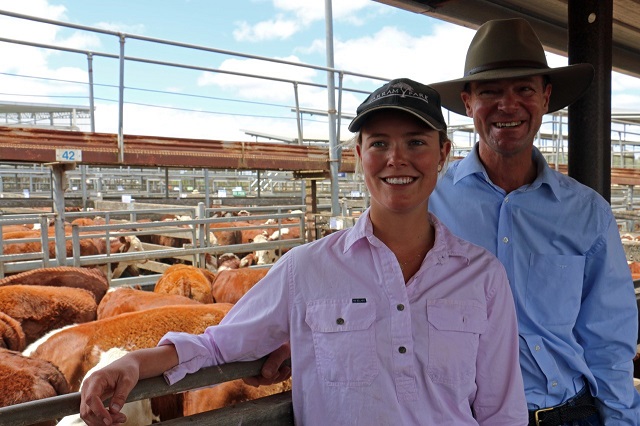 Marcus Winter-Cooke and his daughter Alice, of Hamilton, sold their top pen of Yarram Park blood steers, 420kg, EU accredited, for 365c/kg or $1533. 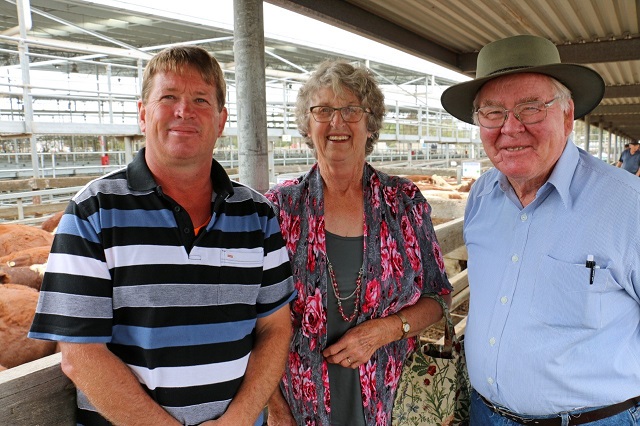 Leon Wheeler, Wallacedale, and his parents Audrey and Maurice Wheeler, Warrnambool, were among the crowd at the Hamilton Hereford feature weaner sale. 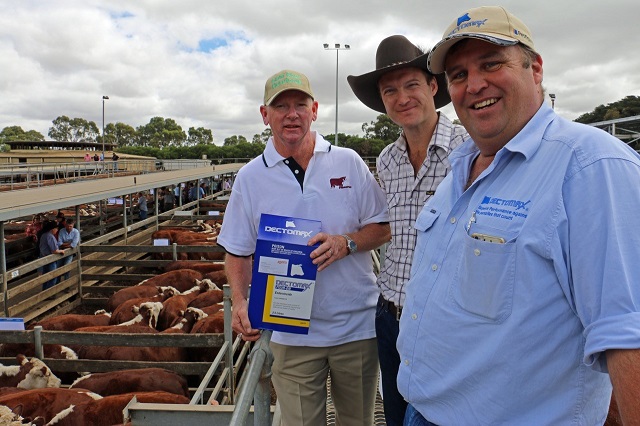