Northern Buyers Snap Up Hereford Steers To 430c/Kg At Casterton

Hereford cattle with weight and frame were sought after for finishing for the grassfed or lotfeeding markets.

In a yarding of 2000 Hereford, Black Baldy and Angus weaners offered by Landmark Casterton, vendors were left smiling as prices lifted almost 100c/kg or $230 a head on last year.

The western districts fixture, held on soft flooring, was the opening weaner sale for the whiteface breed for 2017.

“The Herefords matched it on a cents per kilogram basis with the black cattle today,’’ he said.

‘’The sale was very good, especially on the lighter cattle – we are 100c/kg better off this year.’’

Alan and Debbie Millard, “Welbanite’’, Merino, topped the Hereford pens on a dollars per head basis at $1395 – a jump of $443 on their top pen last year.

The pen of 34 Banemore and Bowmont blood steers weighed 374kg, were EU accredited and were bought by Wagga commission buyer Andrew Lowe for 373c/kg.

“I sold cattle to the live export to Russia last year but everyone deserves to have a go at these fantastic Hereford genetics this year,’’ he said.

“I like the Herefords placid nature and weight gain, and they are easy on the eye.’’

“I like their temperament – it’s nice to see those white faces always having a look at what I’m doing,’’ he said.

“We have had a terrific year with 41 inches (1025mm) of rain and the cattle are looking really good,’’ Alan said.

“We sell here annually so this is the first market we have seen for a year.

“Herefords do really well in this country – our top steers made $1036 last year.

“This year they are 20kg heavier and were supplemented with hay only.’’

Manny and Jean Carlin, “Butches”, Casterton, opened the Hereford draft with a pen of 27 Taronga blood steers, EU accredited, and 364c/kg. They sold to Tasman Holdings for 360c/kg or $1310.

“The weights were 20-30kg up this year with the good season,’’ Mr Carlin said.

“I like their temperament – they come right up to the feed cart.’’

Mr Bright said the sale drew active buyer support from JBS Australia and Thomas Foods International but there was no live export orders.

“There is no point having a paddock full of feed and nothing to eat it.’’ 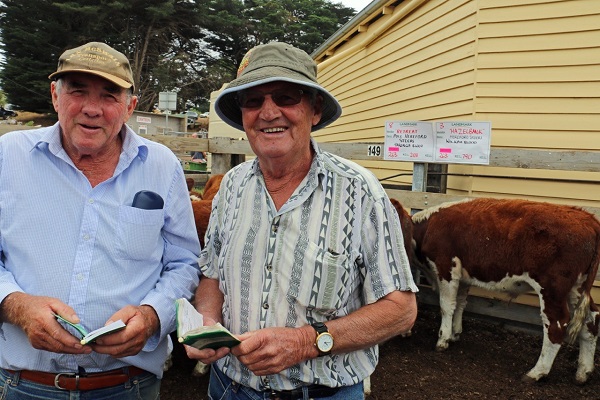 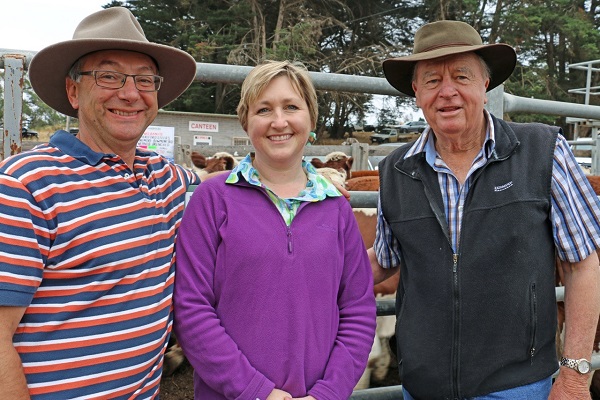 Alan and Debbie Millard, “Welbanite’’, Merino, with David Jenkin, Banemore Herefords, Penshurst, after the Millards sold Banemore and Bowmont blood steers to a top of $1395 at Casterton. 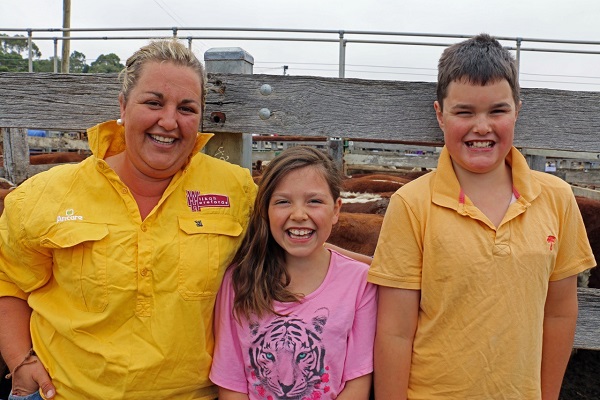 Angela Lyons, and her children Kaylah and Will, Wilkah Herefords, Gringegalonga, were thrilled to sell 278kg steers for 410c/kg at Casterton 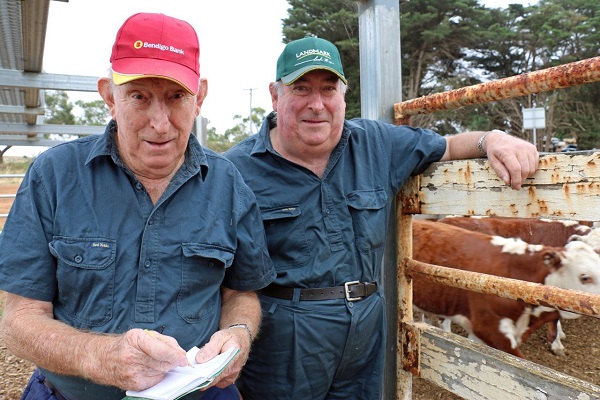 Kevin and Alan McDonald, “Sunningdale”, Digby, were pleased to sell their lighter calves to 428c/kg or $1082 to Mark Barton, Landmark Molong. 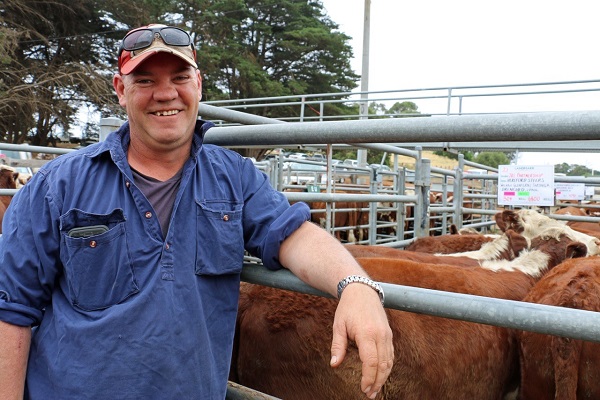 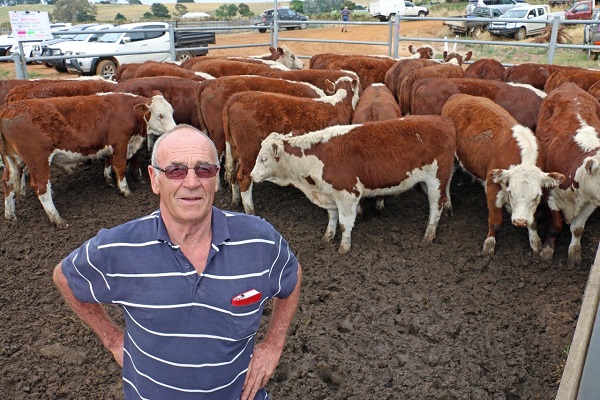 Manny Carlin, Casterton, opened the Hereford offering with his pen of Taronga blood, EU, 364kg steers, selling for $1310 or 360c/kg 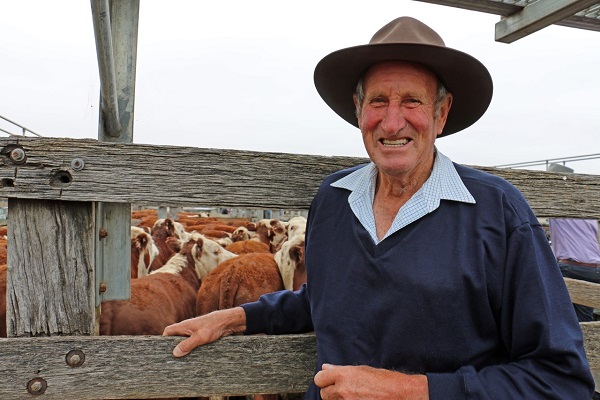 David Lyons, Melville Herefords and Melville Park Poll Herefords, Vasey, was among the crowd at the Casterton weaner sale 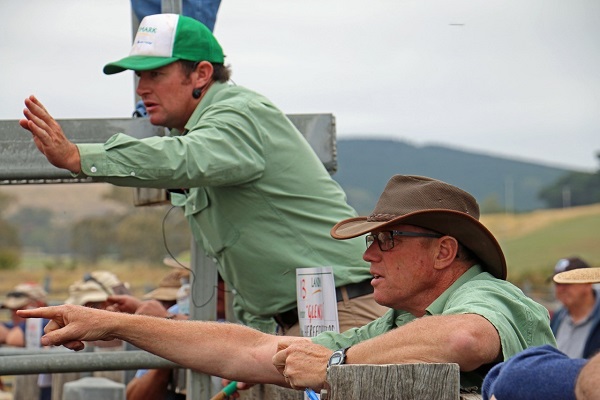 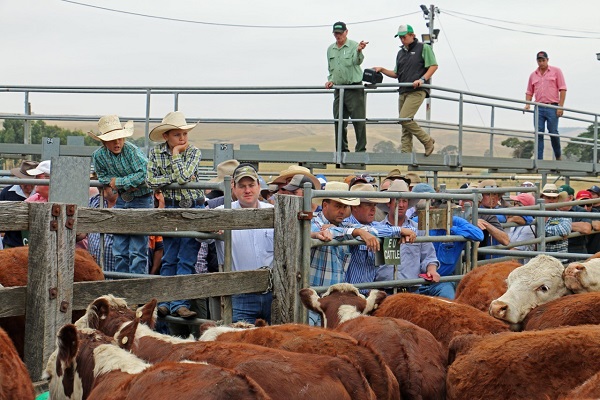 Buyers, vendors and spectators crowd the rails for a view of the Hereford steer weaners on offer at the Casterton sale. 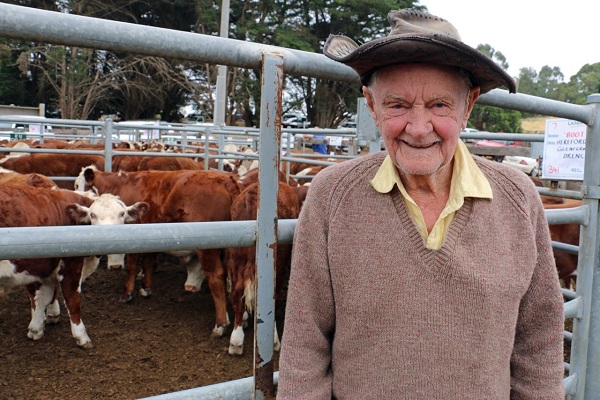 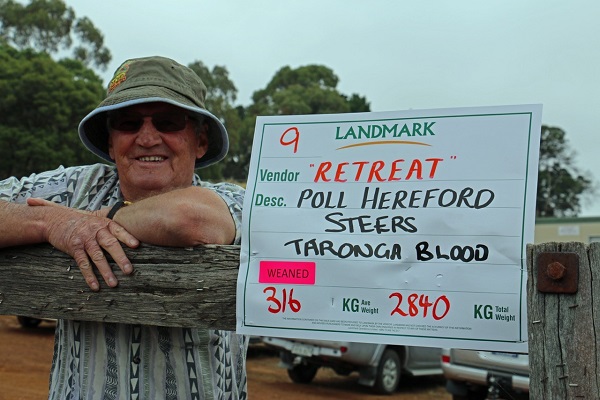