Lot feeders, and Gippsland grass finishers competed on the yarding at Sale in Victoria.

Heavier steers account of R McGeehan weighed 389kg and made $1360.

The top pen of Black Baldy steers at $1400 weighed 401kg and were offered by R McGeehan.

At Corryong in the Upper Murray, the special store sale resulted in Norm and Sharon Nankervis, Colac Colac, selling a draft of 100 seven to eight month old steers, Rotherfield and Sugarloaf blood.

Justin Costello, Costello Rural, said steer finishers from the Upper Murray, Wangaratta and Wodonga paid to $1280 or 400c/kg for the Nankervis steers weighing 320kg, and $1245 for the lighter calves at 286kg or 435c/kg.

Hereford steer vealers sold for 322c/kg at the 25th annual IRA Elite Vealer and Weaner sale in WA on December 5.

At Powranna, in Tasmania, the final store sale for the year on December 8 resulted in prices never before seen at the selling centre.

Station mated Hereford cows and calves were in demand during the week, with four year-old cows from Violet Town, Vic, topping at $2430 on AuctionsPlus.

At Dubbo, a consignment of 200 Santa Gertrudis and Santa/Hereford cross heifers, eight to 14 months, sold in the prime market on Thursday.

Martin Simmons, Elders Dubbo Livsetock manager, said the cattle weighed an average of 360kg, made 301c/kg to return an average of $1078. 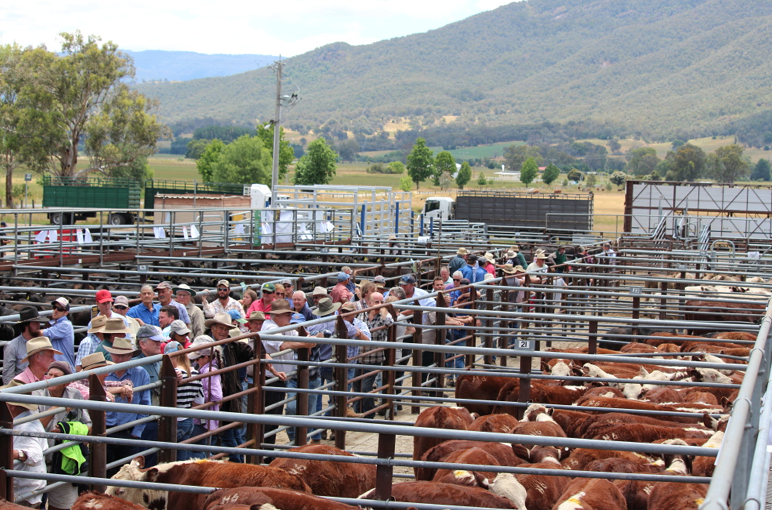