Restockers will be presented with an opportunity this week to secure highly regarded pregnancy-tested-in-calf females upon the dispersal of a prominent Victorian commercial herd.

The Mt Widderin European Union-accredited herd of Geoff and Di Notman, Skipton, will be offered on AuctionsPlus on Friday, December 16.

Mr Notman said the large framed breeders have been selected for fertility and milk, and would present in outstanding condition.

“We are offering the tops of the drop of the heifers, with a curfew weight of 368kg, on AuctionsPlus and the balance will be offered at the Hamilton weaner sale.’’

Mr Notman said the steer portion would be the family’s “last hurrah’’ at the Hamilton weaner sale on January 12.

The Notmans and their Hereford weaners have been a drawcard at the Landmark/Elders combined weaner sale at Hamilton since 2002.

For the previous decade, the family had sold weaner at Mortlake with the steers sought after by grass fatteners.

The Mt Widderin cattle have topped the Elders Hamilton sale eight times in the past 12 years and awarded the best presented pen six out of the last seven years.

The herd was based on South Boorook bloodlines with top end sires sourced from Yarram Park and Injemira.

This year, the Hamilton Feature Weaner Calf sale opened on a pen of heavy Yarram Park and Injemira blood steers, weighing 415kg, and EU accredited, offered by the Notmans.

“Herefords have been good to us over the years with their temperament, calving ease, weight gain and feed conversion efficiency,’’ Mr Notman said.

“We have high conception rates – out of 215 pregnancy tested cows, only six were empty,’’ Mr Notman said.

“I join the heifers at 14 months over six weeks in a body score condition of three to four to calve to low birthweight bulls from March 2 onwards.

“I’ve always had a real affinity with the cattle and we have made many friends through the Hereford breed.

“Di and I are retiring but you will continue to see us at the cattle sales.’’ 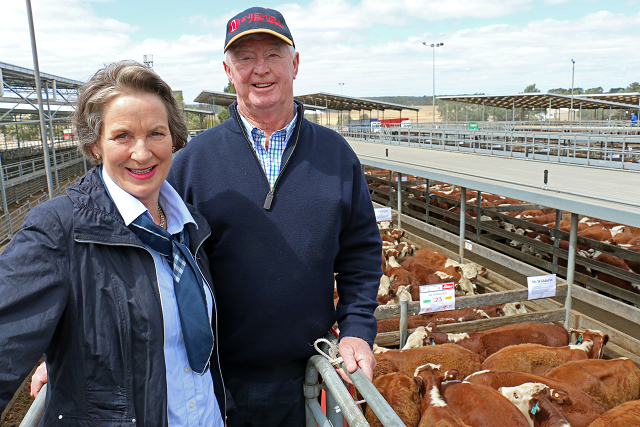 Di and Geoff Notman, pictured with their best presented pen at the 2016 Hamilton weaner sale, will disperse their Mt Widderin commercial herd on Friday.