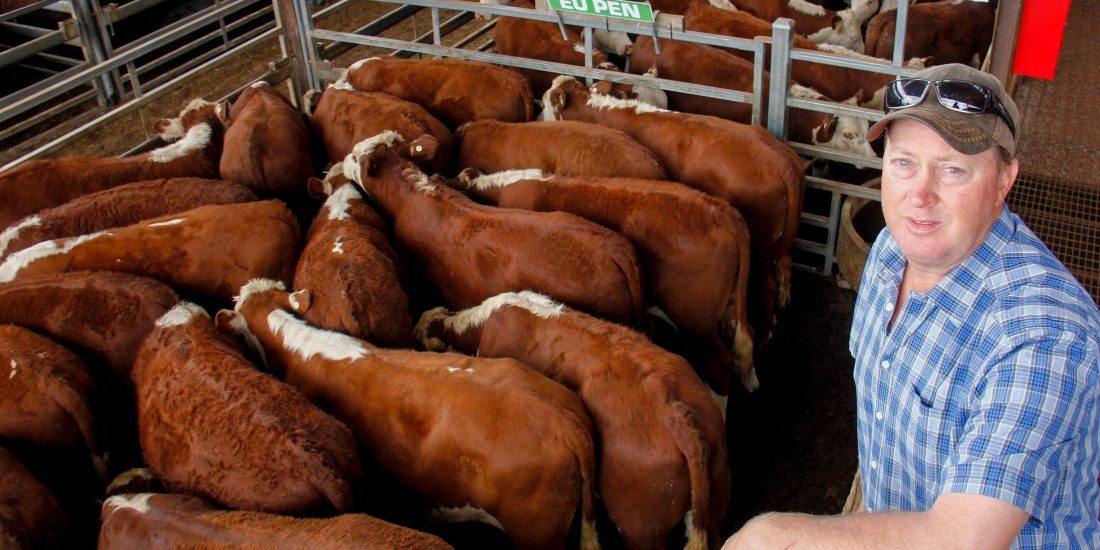 HEREFORD calves debuted at the prestigious Western District weaners sales in Hamilton on Tuesday, and captured the market price high for heifers at 750 cents per kilogram liveweight.

The steer run also posted formidable results as they were supported by repeat buyers from both the south and north, selling to a top of $2477 for March/April drop calves.

It sets the stage for a strong showing for whiteface cattle at the Victorian markets, with feature lines of Hereford calves set to be sold later this week at multiple events including Casterton, Hamilton, Mortlake and Yea.

Results out of Hamilton on Tuesday were exciting for stud breeders such as Jeremy Upton, Yarram Park, as the money invested in genetics and breeding by local cattle producers was rewarded in big dollar per head returns.

“This has been outstanding, with the depth of breeding that is now evident in these herds really showing out in the calves,’’ he said.

“These prices have been every bit as strong, if not better, than the blacks.’’

It was the heifers that became the talking point, with commercial breeders wanting well-bred Hereford females chasing out the Beerik calves to a top of 750c/kg for 46 calves that weighed 311kg, costing $2332.50.

All calves are curfewed and weighed at Hamilton and bidding is in cents per kilogram at these special sales, rather than the traditional dollars per head system used at most store sales.

The Beerik heifers were bred by Gordon and Jane McClure and son Owen at Coleraine, with the herd boasting more than two decades of Yarram genetics in its history, as well as some Injemira influence in recent times.

Data from the Hamilton saleyards shows 750c was the top price for heifers in the 3494 head yarding, with the average for all heifers sold down at 640c/kg. The lead runs of Herefords heifers easily exceeded this mark, and were presented with multi boxes ticked for potential buyers including PCAS eligible, antibiotic free, EU accredited and properly yard weaned.

John and Liz Craig from Inverell were major vendors, offering their annual draft of 250 Hereford calves.

Their steers lead the Hereford run, the opening pen of 24 head at 397kg selling for 624c/kg or $2477 to commission buyer Andrew Lowe, with the cattle destined for repeat buyer Paul Mason of Wellington in NSW. Mr Mason grass finishes EU bullocks.

But it was the middle run of steers in the more nicely weighed range of 320 to 370kg which really caught the attention of grass finishers wanting good-framed cattle to suit export beef orders.

These sales were in the top echelon of anything recorded so far in the Western District across all breeds, bringing a smile to Mr Craig’s face.

“The top pen might have been a bit soft but then we had a good win on the seconds and thirds which sold above expectations by 10c to 20c/kg, and at the end of the day it is the overall average that matters,’’ he said.

The Inverell herd has a long association with Yarram Park, and Mr Craig said they aimed to breed strong-boned cattle with length and depth that could carry weight while still having the softness to finish.

Another breeder to have an impressive day was the father and son team of Kevin and Ben Mibus, Kalena at Penshurst. Their steers selling from 638c to a top of 700c/kg lwt.

Gippsland agent Neil Darby, Alex Scott & Staff at Warragul, purchased the tops of the Kalena steers for a bullock client who will grow them out to extra heavy weights of 700kg plus.

Mr Darby said he was happy to support any well-bred Hereford calves as they performed well off grass.

“The top end of the Hereford cattle always do well for us, and we target the better bred calves which is why we have been buying here today,’’ he said.

The overall steer average for Hamilton on Tuesday was 662c/kg, which meant the feature lines of Herefords were in the top price range of the market. 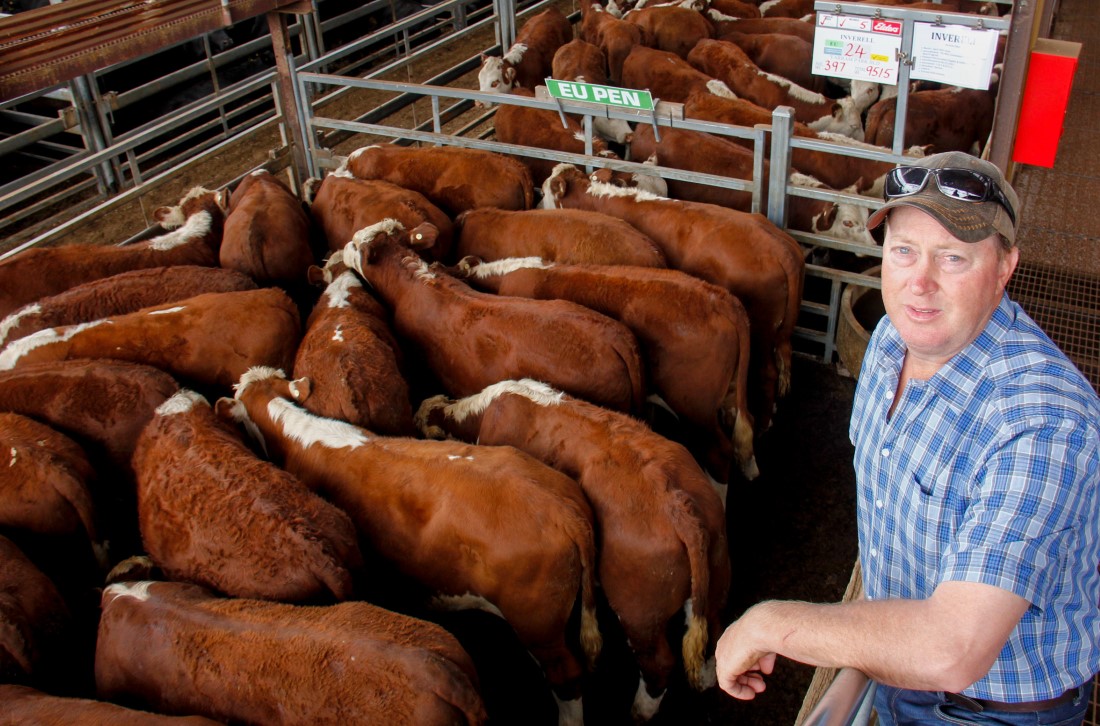 Hereford breeder John Craig, Inverell, with the lead of his 250 calves which sold to $2477 at Hamilton on Tuesday. 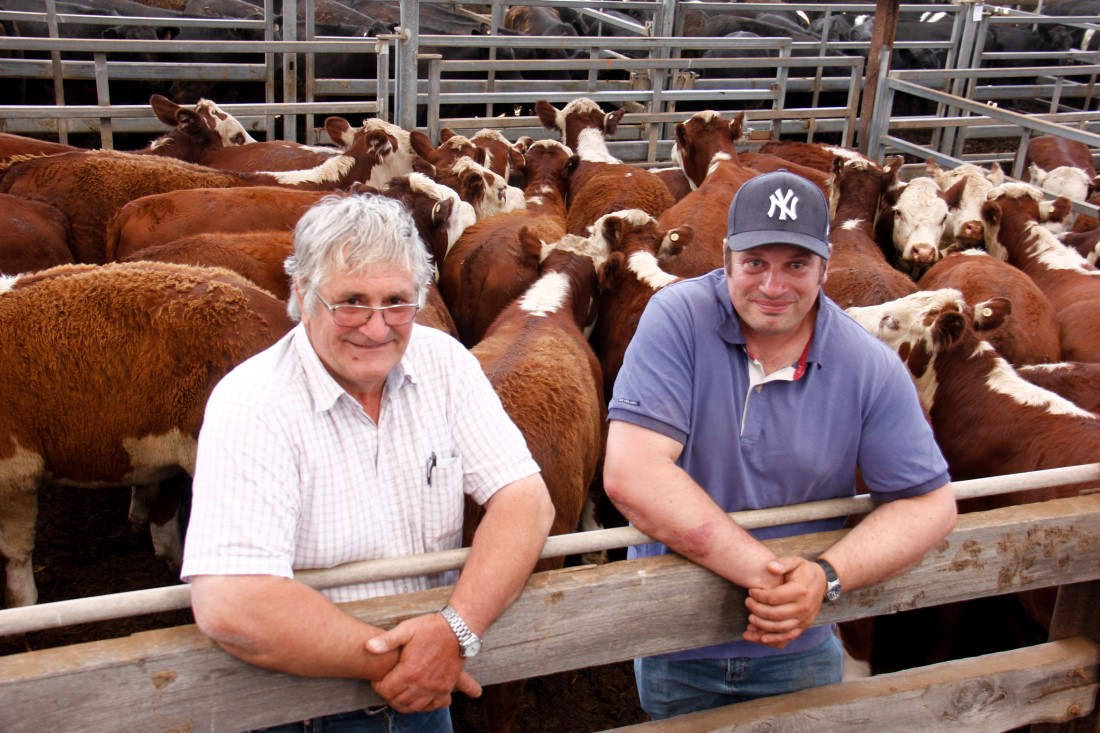 Kevin and Ben Mibus, Kalena at Penshurst, with their 68 Hereford steers which sold to $2316 at Hamilton today 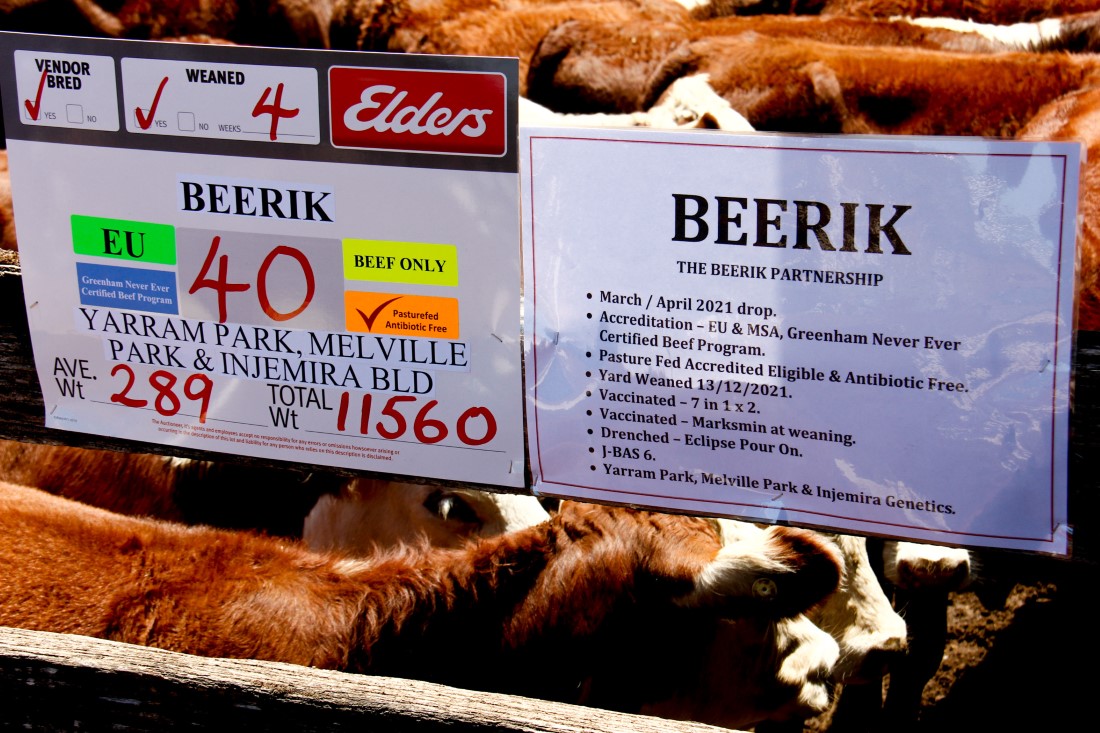