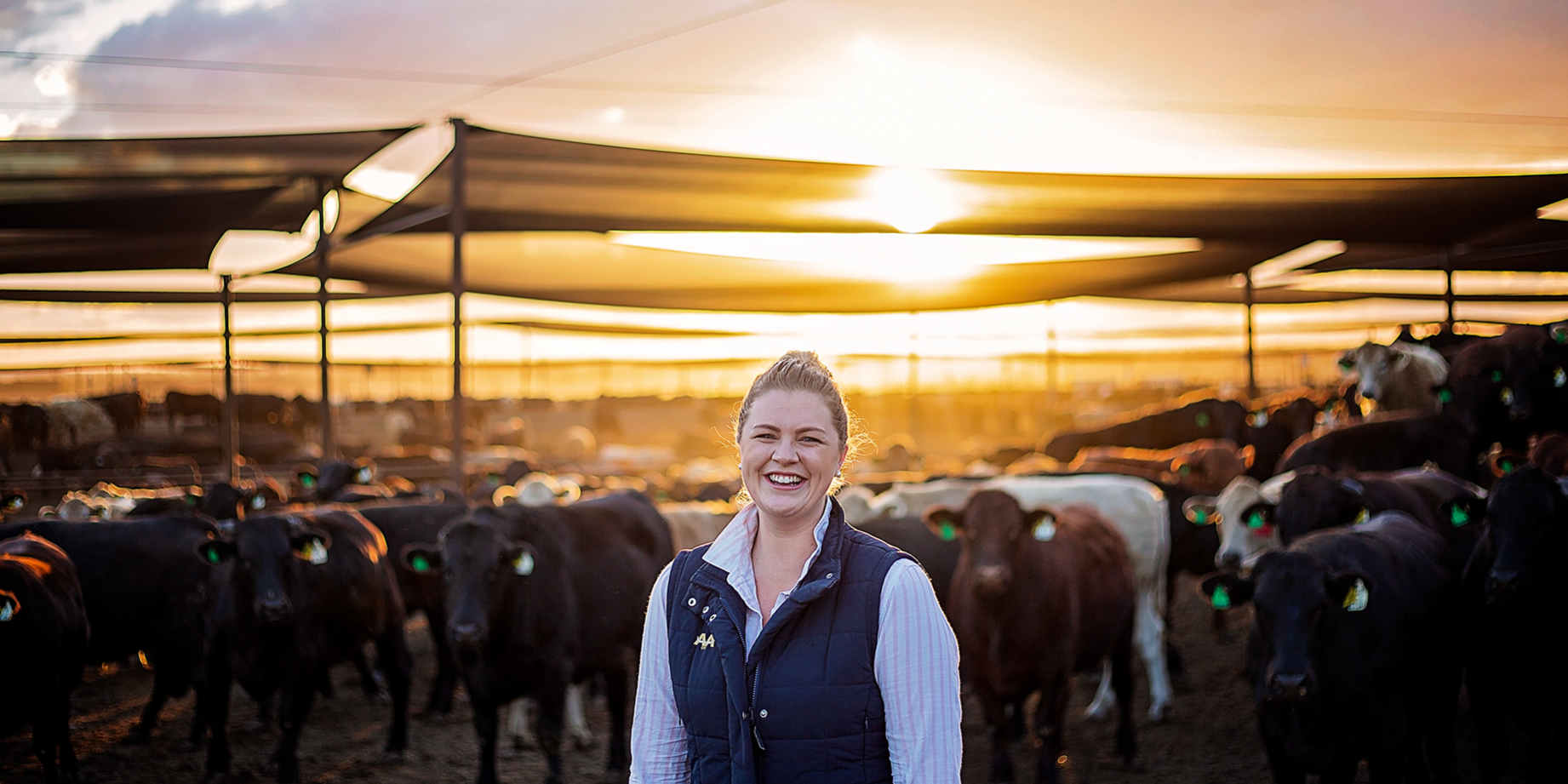 An instinct for beef production and “why not” attitude has spring-boarded the career of Hannah Gibb from an ambitious teen running a Hereford stud to an Australian Agricultural Company (AACo) Operations Analyst, assisting at least 10 business portfolios.

Hannah’s journey has taken her from her hometown of Feilding in New Zealand to working with Australia’s largest integrated beef business, and is a story that will be shared in the final instalment of Hereford Australia’s popular Youth Seminar series on Tuesday, 2 November.

For the past four weeks, the Hereford Youth Committee has presented a line-up of speakers from across Australian agriculture to the online forum to inspire and empower future leaders.

Hannah, 25, who is now based at AACo’s Aronui Feedlot just outside of Dalby, said the key message she was hoping to drive home to young people was simple: “have a crack”.

“My message will be sharing what has worked for me, and that’s that hard work and a good attitude can get you places,” Hannah said.

“You have to be willing to have a crack and stick your neck out a little. Often, you have nothing to lose by having a go.”

Growing up in town in Feilding, Hannah spent the weekends and school holidays of her youth helping her grandparents Mike and Lorraine Langtry with their stud, Awhea Poll Herefords.

The hands-on experience was a masterclass in seedstock operations, as Awhea was a prominent New Zealand stud known for producing breed champions, including Awhea Arrow, a sire which sold for $75,000 in 2002.

“My grandparents chose to disperse the stud and downsize, so my cousin and I took it over and started managing it,” she said.

“We were gifted heifer calves as a birthday presents over the years and used those females to start it all back up again. That’s where my involvement with Herefords began, and I have never looked back.”

After completing an Agriculture Science Degree, and working as the coordinator for NZ Hereford Youth, Hannah was named Senior Beef Ambassador for Future Beef New Zealand, a not-for-profit organisation fostering the talent of agriculture’s next generation, in 2017.

The award offered the opportunity to travel abroad, which she used as a platform to expand her career, so Hannah headed to Australia to visit and learn from Hereford studs here.

“My tour basically started from the bottom of South Australia and headed all the way north to Rockhampton for Beef Australia in 2018,” Hannah said.

“That’s where I stumbled into the AACo tent to catch up with a breeder whose family I had met on my tour – and subsequently learnt all about AACo and what the company does.

“I thought ‘this is a company I would like to work for’, and after returning home to New Zealand, I pretty much flew straight back.”

Joining AACo as part of its graduate program, Hannah spent 18 months entrenched in a multitude of operations across the sprawling business, and gravitated herself towards intensive operations.

Today, as an Operations Analyst, she spends her time analysing feedlot commodity usage, looking at purchasing requirements and forecasting carcase-weight projections – critical information shared with the processing team to support the sales team in exporting premium beef across the globe.

“First and foremost, my job is supporting our managers with business cases, projects or ad-lib reporting as they require it. I also manage a lot of data collation when we run trials in the feedlot and complete a lot of financial budgeting and analysis during budget periods,” Hannah said.

“I am also looking forward to assisting with some of our Artificial Insemination programs later in the year.”

Hannah said no two days were the same and the best part of her job was working with likeminded people.

“All my family are back home in New Zealand, so the people I work with here have become like family,” she said.

“I am extremely passionate about agriculture and I have found following that passion has driven my career. I am living the dream over here.”