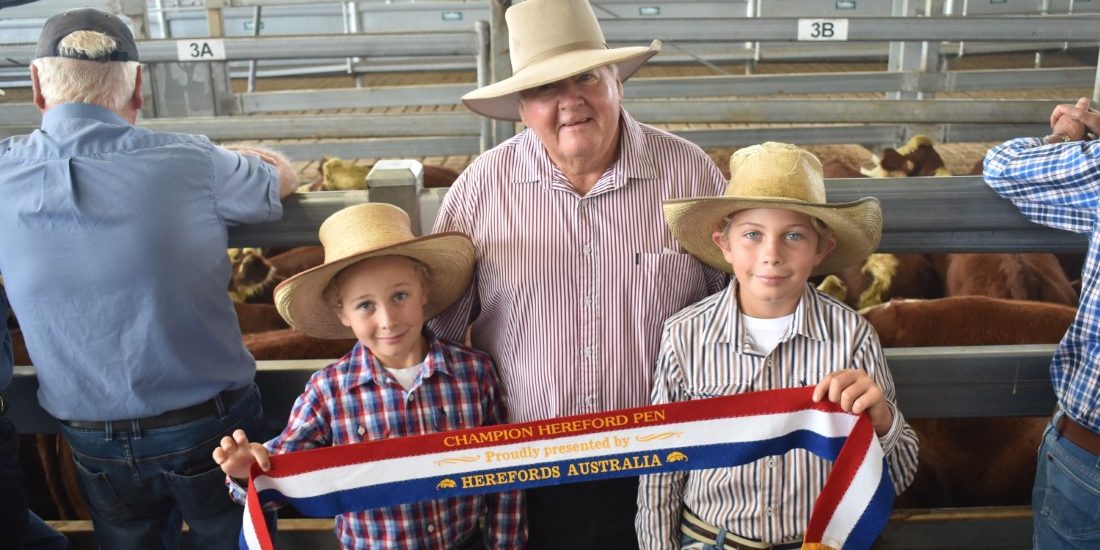 Agents yarded 1220 head of quality Hereford steers and heifers which according to George and Fuhrmann agent Darren Perkins was approximately 300-400 head back on previous years due to some vendors selling early due to the season.

Buying strength came from across NSW, Victoria and Queensland, with buyers in attendance from Coonamble, Moree, Benalla and Dalby.

“A lot of buyers were backgrounding for feedlots, only a handful [of cattle] went directly to feedlots.

“We had half repeat buyers and half new buyers here today,” Mr. Perkins said.

Mr. Perkins quoted Hereford steers at between 480c/kg and 505c/kg and Hereford heifers between 380c/kg and 440c/kg.

The champion pen of Hereford steers was presented to John and Marie Smith of Woodenbong, with a pen of 21 EU accredited steers weighing 299kg.

John and Marie offered 366 head at the sale on Friday and sell at the Casino Hereford weaner sale every year.

John was very pleased with the result on sale day and was very happy to be awarded champion pen.

The top cents per kilogram rate for Hereford steers of 504c/kg was paid for 48 EU accredited steers offered by Peterson Partnership.

The top black baldy rate of 520c/kg was paid by Elders Goondiwindi for 20 steers offered by S and S Edmonds.

In the heifer pens the top rate was paid for the champion pen of Hereford heifers, offered by RB and N Maloney of Woodenbong.

Black baldy heifers sold to a top rate of 450c/kg for 16 EU accredited heifers offered by GS and MM Quinn.

According to Mr. Perkins the majority of heifers either went back into the paddock as breeders or to be fattened for the supermarket trade.

Vendors were pleased with the prices on offer after the difficult seasonal conditions in the lead up to the sale.

Jim and Jan Smith of Townview Pastoral offered 204 June/July drop steers at the sale and made a top cents per kilo rate of 498c/kg.

Jim said he was “really happy” with how the sale went.

“The cattle have come up really well since it rained at the end of January, before that they weren’t looking too good!” Mr. Smith said.

Darren Perkins commended vendors on the quality of the cattle they presented at the sale on Friday given the poor start to the season.

“It was a great quality yarding considering the season the vendors had experienced with only about an eight-week turnaround to present the calves as well as they did,” Mr. Perkins said. 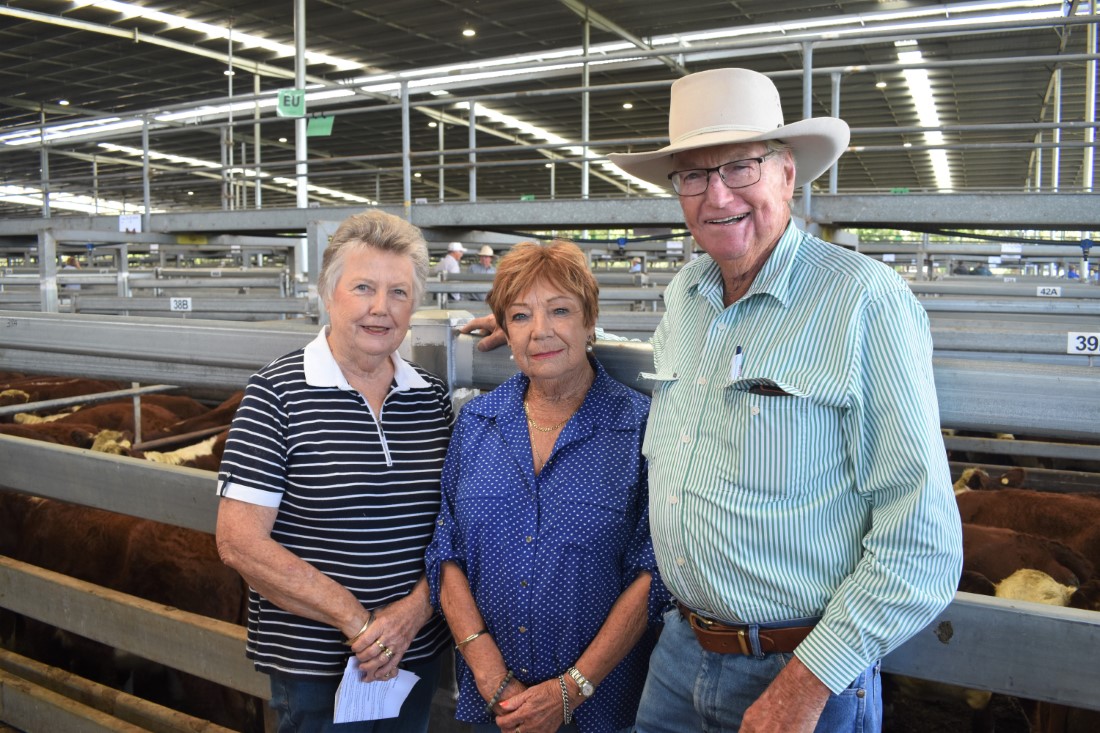 Siblings Kathleen Griffin, Dianne Pembroke and Les O’Reilly caught up at the Casino weaner sale. Les usually sells at the sale but sold early this year due to the drought. 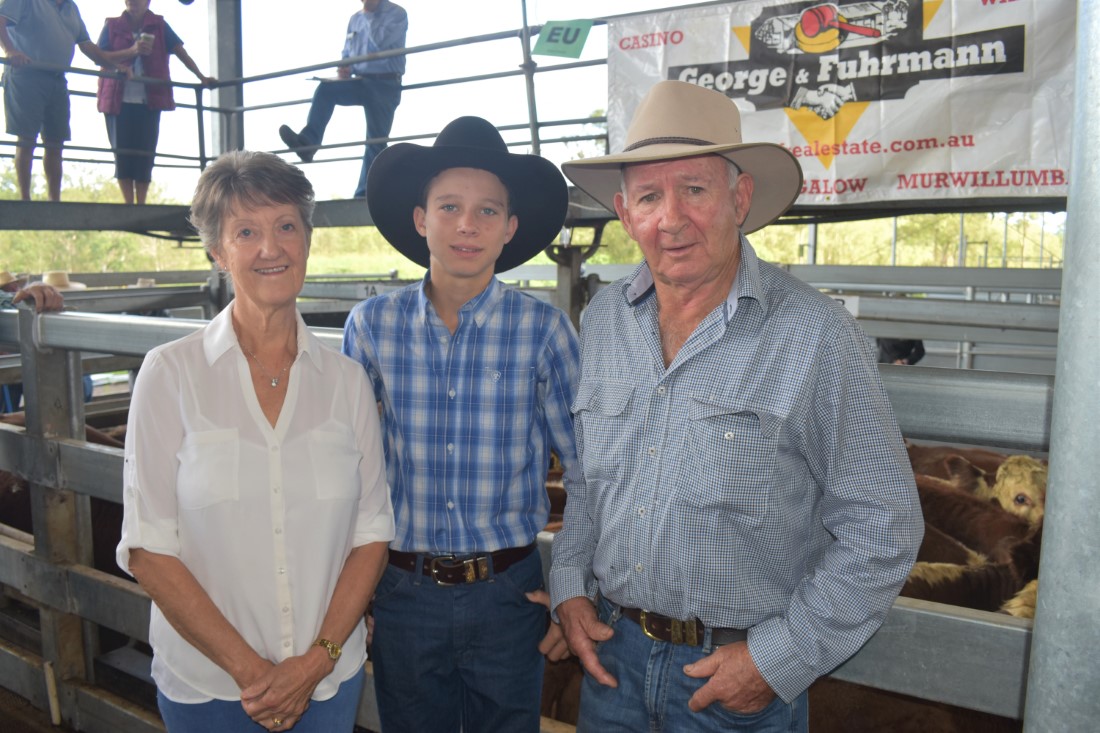 Jan and Jim Smith of Townview Pastoral with grandson James at the Casino weaner sale. 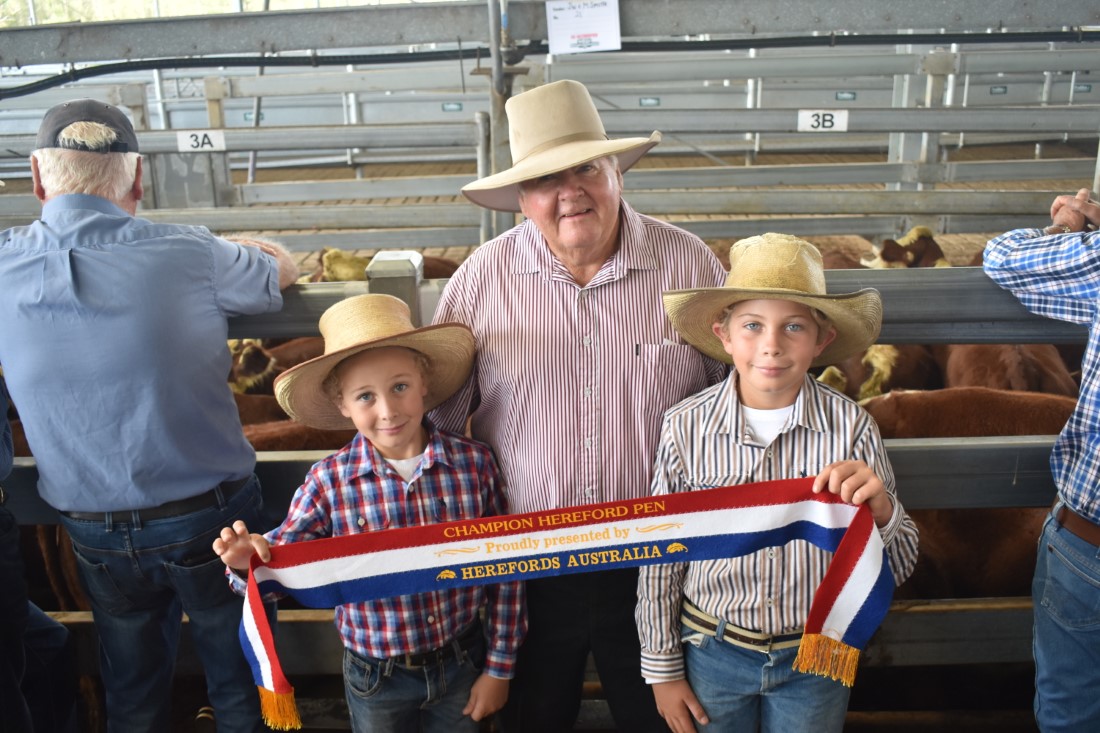 John Smith with grandsons Archie and Hughie Holden with the sash for the champion pen of Hereford steers. 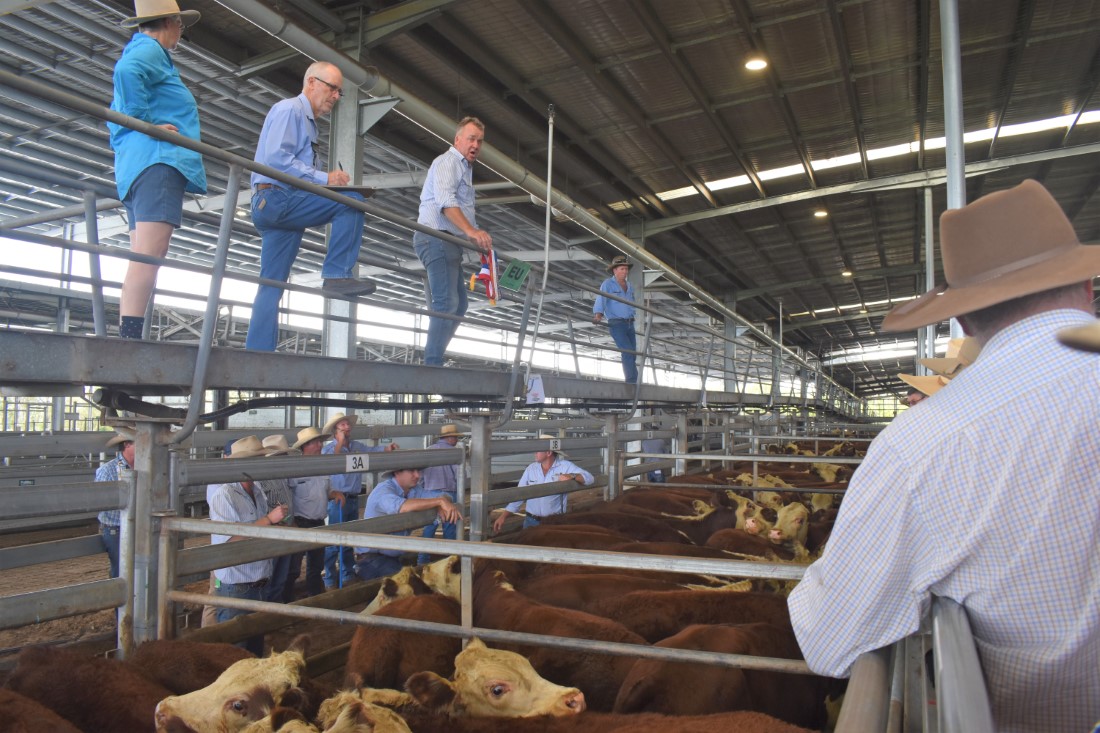 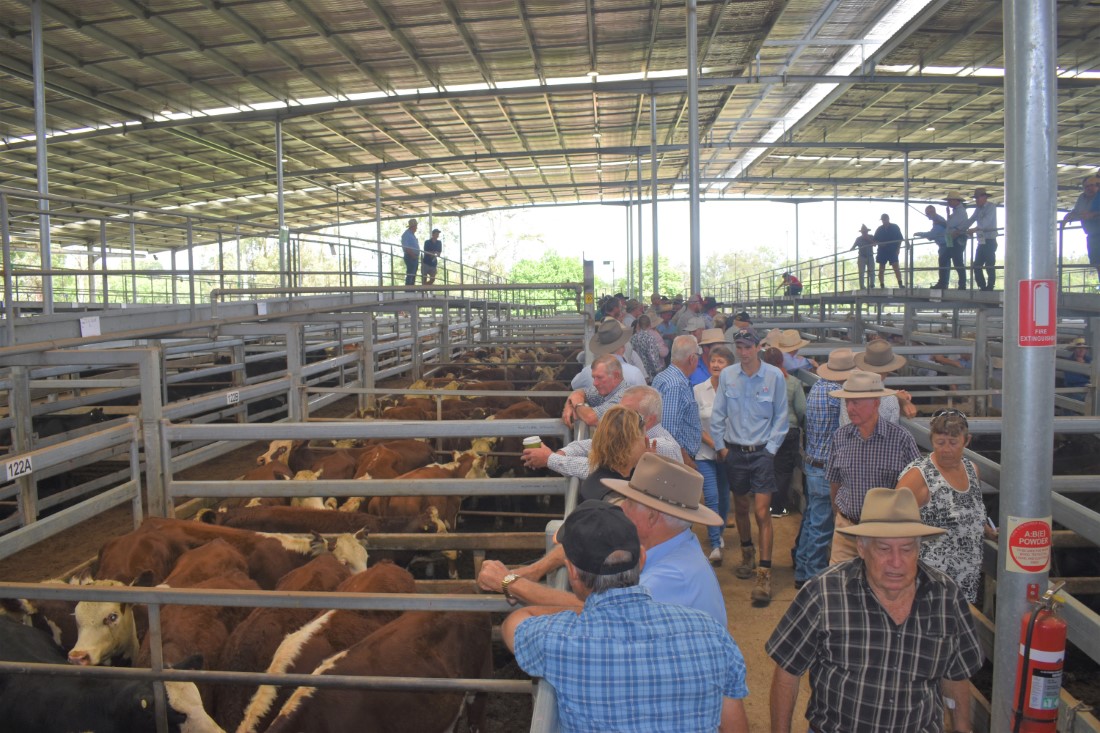 Buyers came from across Victoria, NSW and Queensland to bid at the Casino Hereford weaner sale. 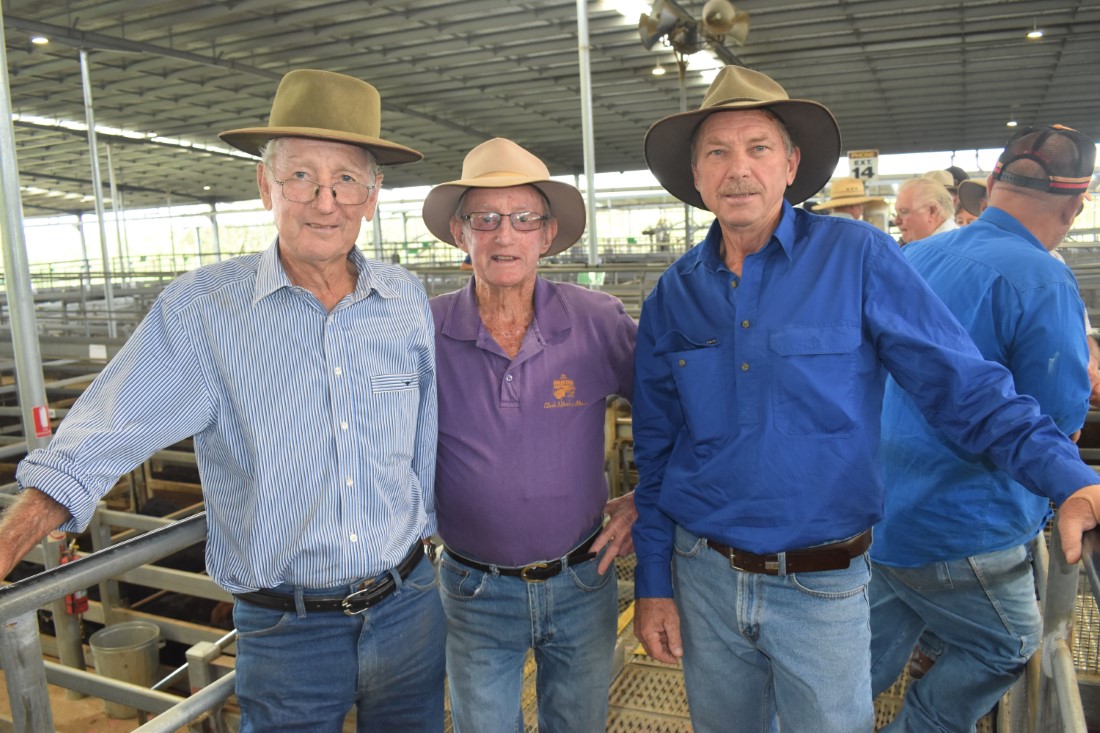 Brian O’Reilly, Les O’Reilly and Mark Bilby caught up above the pens at Casino on Friday. 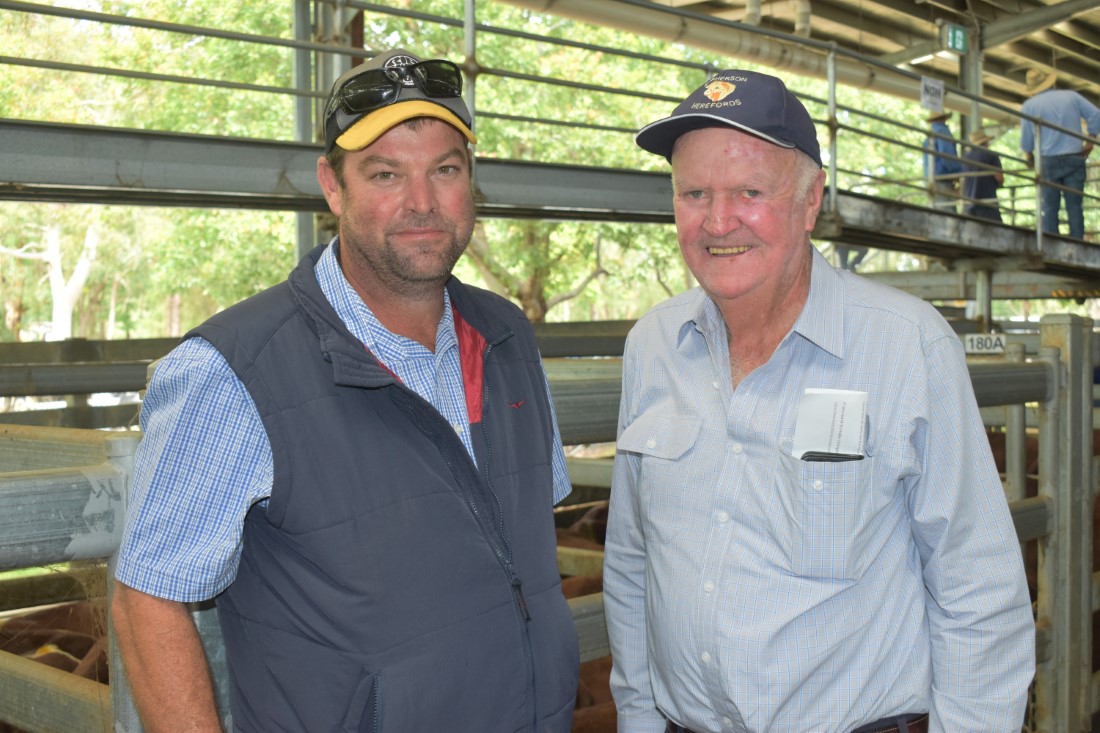 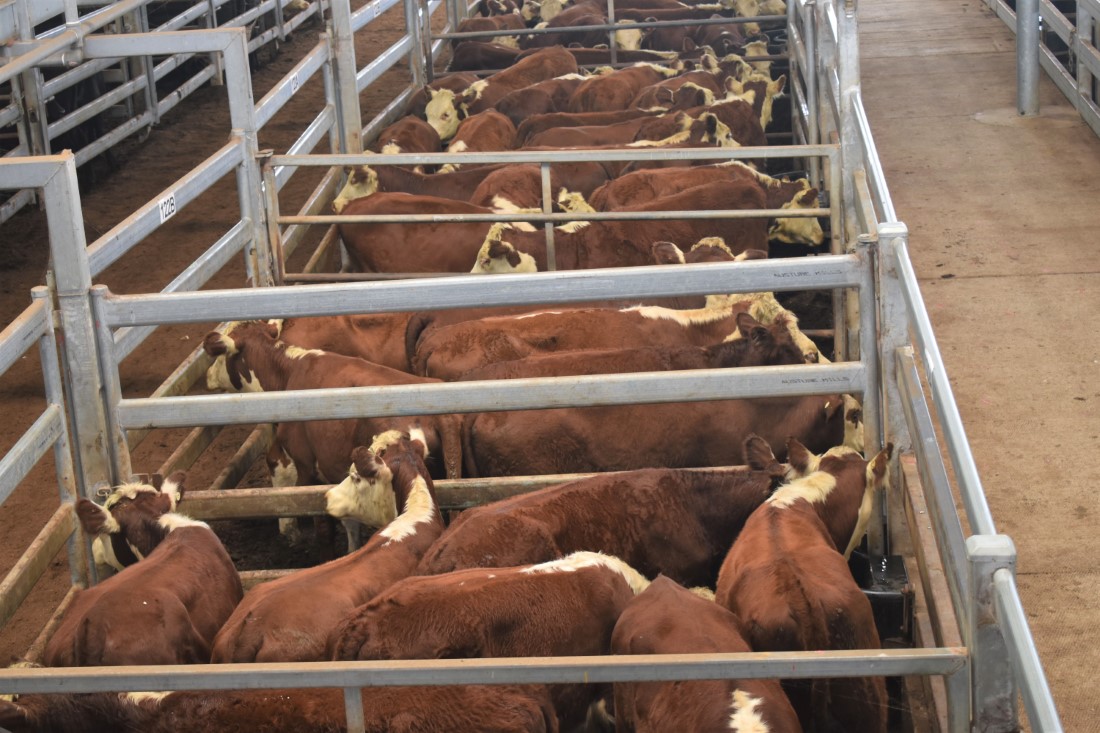