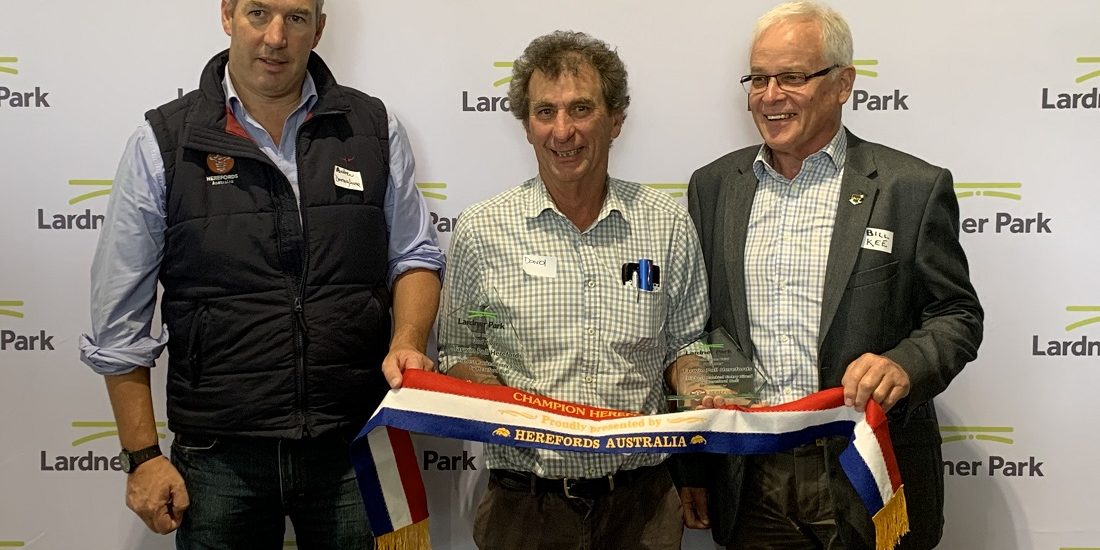 Herefords have demonstrated their renowned grass-finishing ability in the 2019 Lardner Park Steer Trial with a pair of Hereford steers finishing third in overall weight gain and carcase points.

The Lardner Park Steer Trial is the only grass-based steer trial in Australia and has been running for 45 years at Lardner Park in the Gippsland region of Victoria.

Cattle are managed under independently controlled grazing conditions during the period of the trial which provides valuable information on the growth and carcase quality of the steers entered.

The steers were weighed five times throughout the trial which began in June with the final weigh taking place on December 2, 2019.

All steers entered in the 2019 Lardner Park Trial were run in one mob on a predominantly ryegrass-based pasture with supplements fed as deemed necessary depending on pasture growth.

A pair of Hereford Charolais cross steers entered by Tim Hayes of Tarcombe Herefords and Charolais topped the average daily weight gain at 1.53kg per day.

Purebred Herefords entered by David Meikle of Tarwin Poll Herefords had the third highest daily weight gain at 1.51kg per day while a second pen of Tarwin steers averaged 1.38kg per day.

The average daily weight gain across all breeds entered in the trial was 1.28kg per day.

Cattle entered in the trial must meet carcase specifications for standard domestic trade and must be compliant with the Coles QA grass-fed program.

Due to one of the Tarcombe steers being 12kg over the carcase weight specifications, the pair were not eligible for the highest weight gain award.

A different Tarcombe steer however had the highest individual carcase points score of the competition with a score of 91.95 out of 100.

David Meikle entered two pairs of purebred Hereford steers in this year’s competition, with one of the pairs placing third overall with a score of 230.9 (narrowly behind the second placed pair which scored 231.0).

Mr. Meikle has been entering steers in the competition for over 20 years and has won the trial on two separate occasions.

The four Tarwin steers entered in the 2019 competition were out of stud cows and sired by Days Brigadier G101 and Mount Difficult Kenneth K76.

The Tarwin steers are selected from the stud herd prior to the competition starting in June.

“We don’t keep all our males as bulls [within our stud], we then go through the steers to pick a couple to go into the trial,” Mr. Meikle said.

Mr. Meikle said that they had been focusing on increasing the growth rates in their cattle and have now begun focusing on refining carcase traits.

“The last few years I’ve been looking more at IMF and EMA.

“We also focus on doing ability on grass as most of our clients finish cattle on grass,” Mr. Meikle said.

Mr. Meikle regards the Lardner Park Trial as a useful competition to be involved in as it focusses on grass finishing and enables him to compare results between other breeds.

“The trial recognizes weight gain and carcase value and it gives me an insight into our management at home versus Lardner Park,” Mr. Meikle said.

Having been entering the trial for many years, Mr. Meikle is now confident that the steers he selects for the trial in June will meet the carcase specifications come December.

“I know our cattle will meet the specifications in December,

“You make your decision in June for what cattle will be ready in December,” Mr. Meikle said.

Tim Hayes said that while it is only their second year entering the trial it is a great opportunity to compare their herd genetics with other breeds.

Mr. Hayes also likes that steers in the trial are judged in pairs, as it puts more emphasis on consistency.

“The trial is fantastic; I wish I’d known about it earlier.

“We entered straight Herefords in 2018 and did well, we didn’t have any Herefords ready for the trial in 2019 but we will again this year,” Mr. Hayes said.

The Herefords Australia sponsored prize for highest ranked entry sired by a Hereford bull was awarded to the top Tarwin team, with the second Tarwin pair securing second place.

Third place was awarded to a pair of Tarcombe Hereford Charolais cross steers.

Mr. Meikle said he would like to encourage fellow Hereford producers to become involved in the trial, a sentiment Mr. Hayes agrees with.

“We need more Herefords in [the trial].

“Herefords are known for their grass finishing, so we need to push it,” Mr. Hayes said. 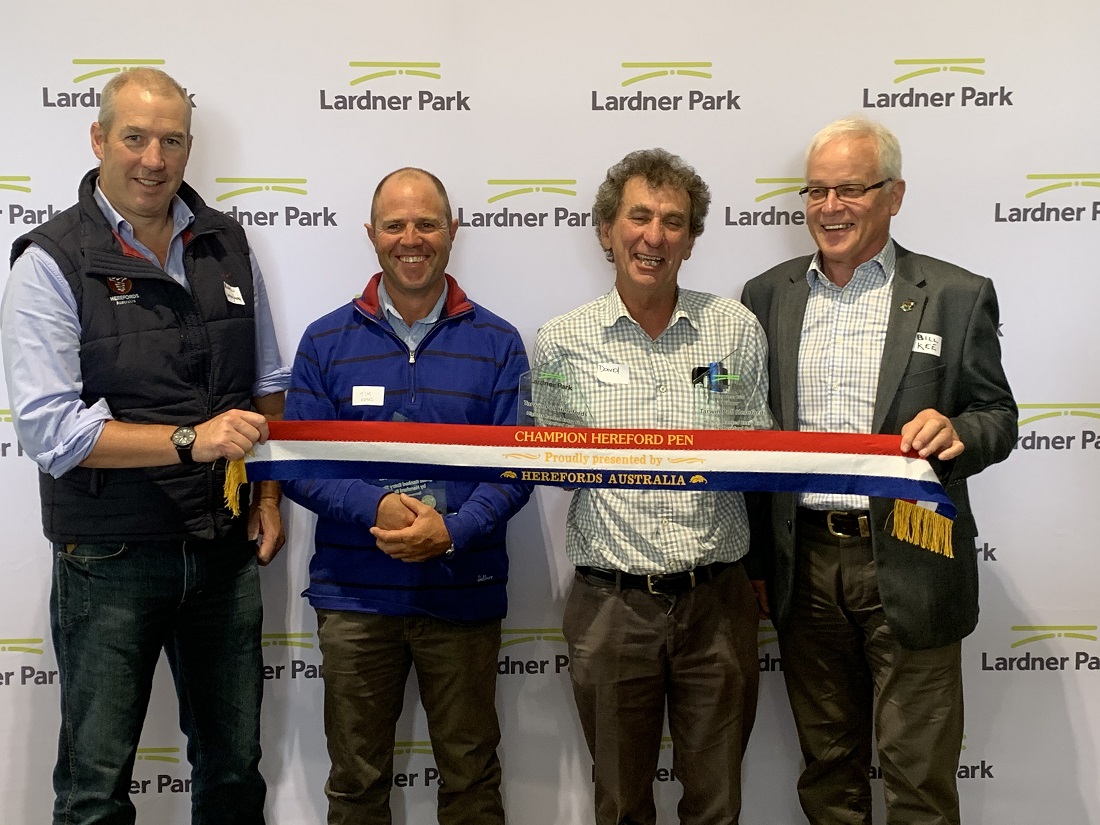 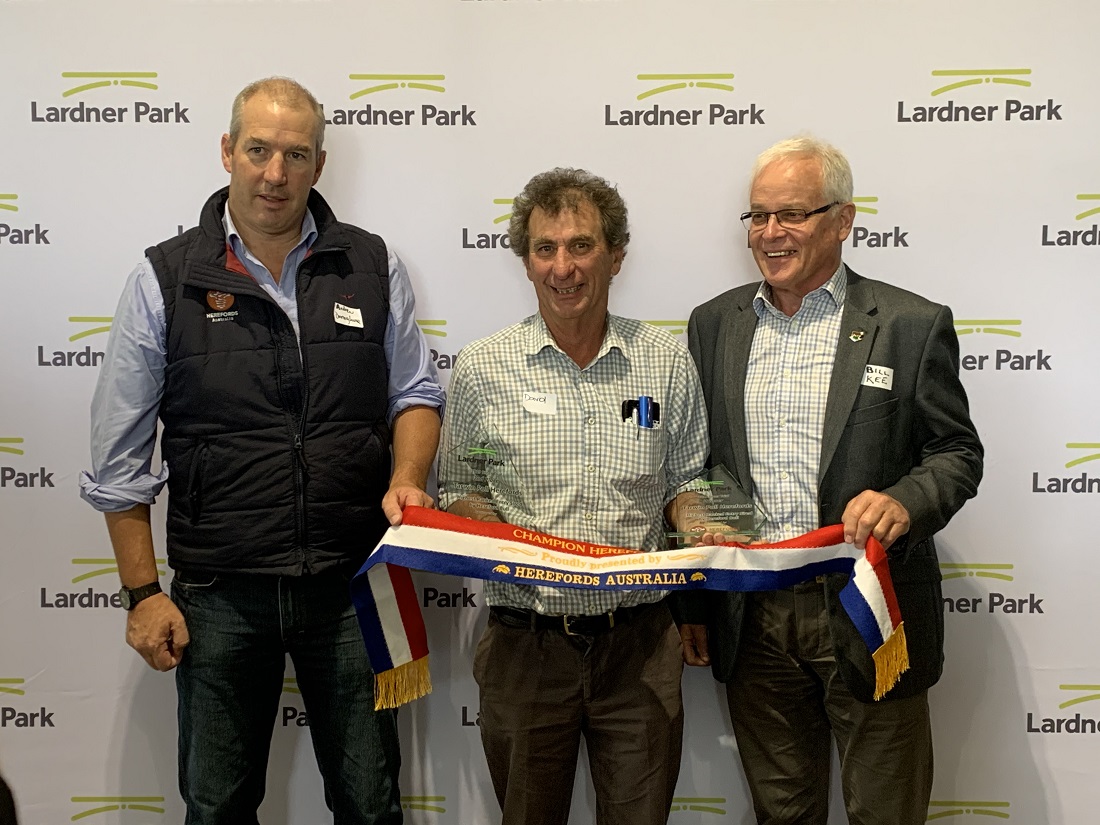 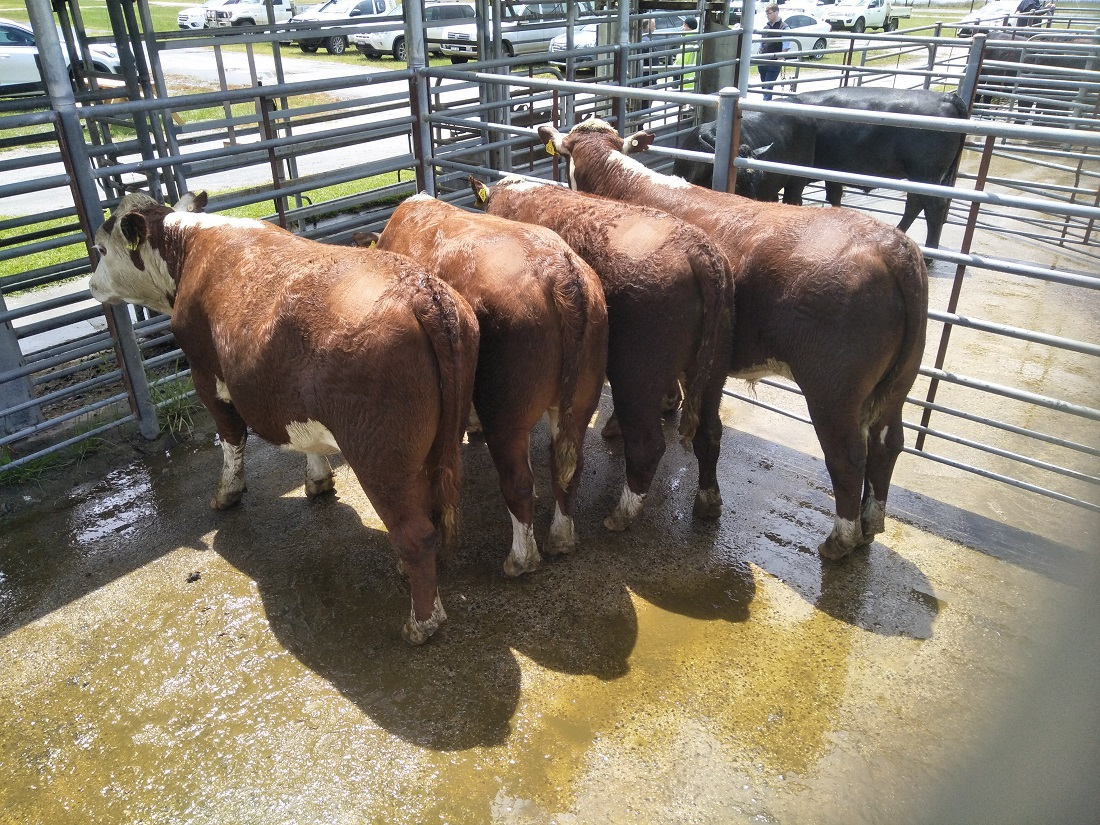 The four Tarwin steers entered in the 2019 Lardner Park Steer Trial at the final weighing day in December.