Heifer prices shoot into unchartered waters on back of demand 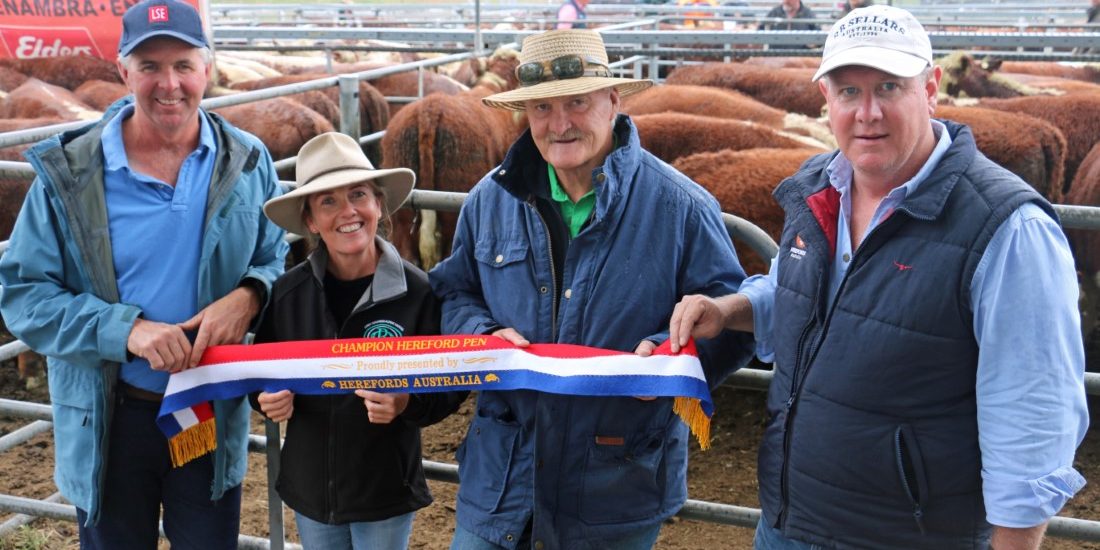 Heifer prices labelled as “insane” left vendors stunned as they eclipsed the steers and skyrocketed to a new record of $1810 at the Omeo Weaner Sale.

Buyers were met with some of the best line-ups of whiteface weaner calves in the nation for the final leg of the 80th annual Mountain Calf Sales at Omeo, with steers hitting $1750 and heifers $1810.

The fixture finalised two days of selling where 7200 cattle were offered at Hinnomunjie, Benambra and Omeo.

The Ensay sale, normally part of the circuit, was cancelled when vendors elected to sell early due to bushfires, but has been slated to return in 2021.

The large crowd was left reeling in the rain when a bidding duel erupted on the opening pen of heifers, autumn drop Shorthorn/Herefords from the Ahsam family, Omeo.

The sale had opened strongly on the steers with a pen of European Union spring droppers from Roger and Yvonne Connley snapped up by SEJ Leongatha for $1750.

Mr Connley had anticipated a high market coming into the sale for heavy spring drop steers at $1700.

“On the heifers, we have never seen prices like that – it’s what we need to cover costs,” he said.

Then it was onto the autumn drop weaners with the Ahsam family ringing the bell again with Shorthorn/Herefords at $1630 and their Hereford portion at $1610, both going to Rodwells.

Bert Ahsam conceded he had never witnessed heifer prices like it during his lifetime.

“I haven’t seen a lot of store sales for a while but it is certainly up there,” he said.

“A lot of people are getting back into breeders and they are hard to find at the moment.”

Restockers and lot feeders made a plunge for the heifers, pushing prices skywards by $360 on the morning’s Benambra sale.

Elders Omeo branch manager David Hill had never witnessed such a buying frenzy at Omeo before, confirming $1810 was a new record top price.

“With the first cross roan heifers, which Omeo is predominantly known for, they are the hardest cattle to value,” he said.

“Those April/May drop calves will be retained in the paddock and were bought by Anthony Delaney.

“It was a credit to the vendor as these cattle could have been offered in January prior to this rain.

“Now they have reaped the rewards and it’s well deserved.”

“These prices will mean an enormous boost for the district – these guys have been chasing fires right through Christmas and the New Year.”

Mr Hill confirmed the Mountain Calf Sales would remain at their new date on the week before the Labour Day long weekend, with Ensay set to return in 2021.

Mr Olgivie liked the frame, stretch and bone of the pen. The April-May drop steers had been weaned on January 10 onto rape and ryegrass.

“The rise in our averages this year means a lot for the district as most of us are playing catch up – everyone will breath a sigh of relief as we have had some pretty tough years,” he said.

“People will use it on capital improvements, fertiliser and genetics.”

Noel Olgivie bought 600 cattle on day one of the calf sales averaging 260-270kg for backgrounding for 40 weeks before grain feeding for 60 days for the supermarket trade.

Heavier cattle will be backgrounded for 30 days and 60 days grain feeding.

“Benambra today was $100 dearer than yesterday – prices are up and we hope the end market will hold,” he said.

“I’d rather be buying cattle at under $1000 as there is less risk. They are fed short term in case the market deteriorates.

“I like all breeds but am price sensitive. I buy 90 per cent heifers – the genetics these days are perhaps too good as they can get too heavy quickly and blow out for the domestic market.”

“We buy around 300 head a week and sell 22,000 cattle a year to Woolworths and JBS, so we are in the market seven days a week to keep the system going.

• The Tambo Valley Producers Group’s social evening was to be held in conjunction with the Ensay sale but has now been rescheduled for Saturday, April 18 at the Ensay Winery from 6pm.

All Hereford breeders, vendors and buyers – past and present – are invited to attend with an Argentinian style barbecue to be held on the night. 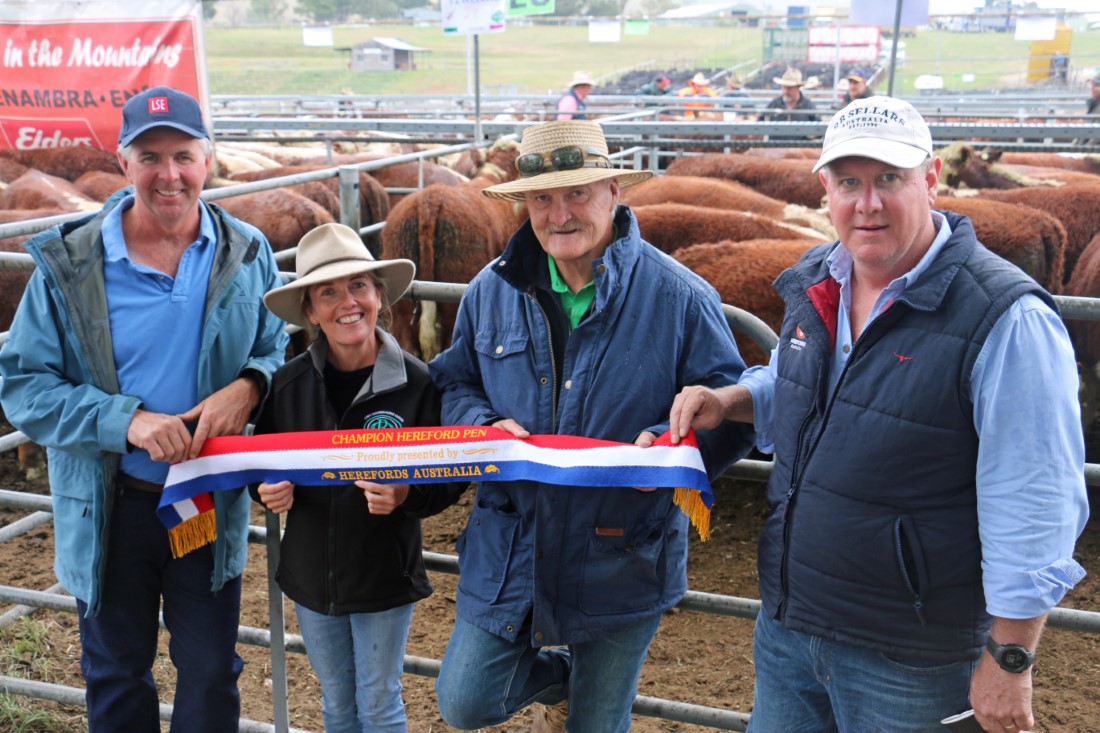 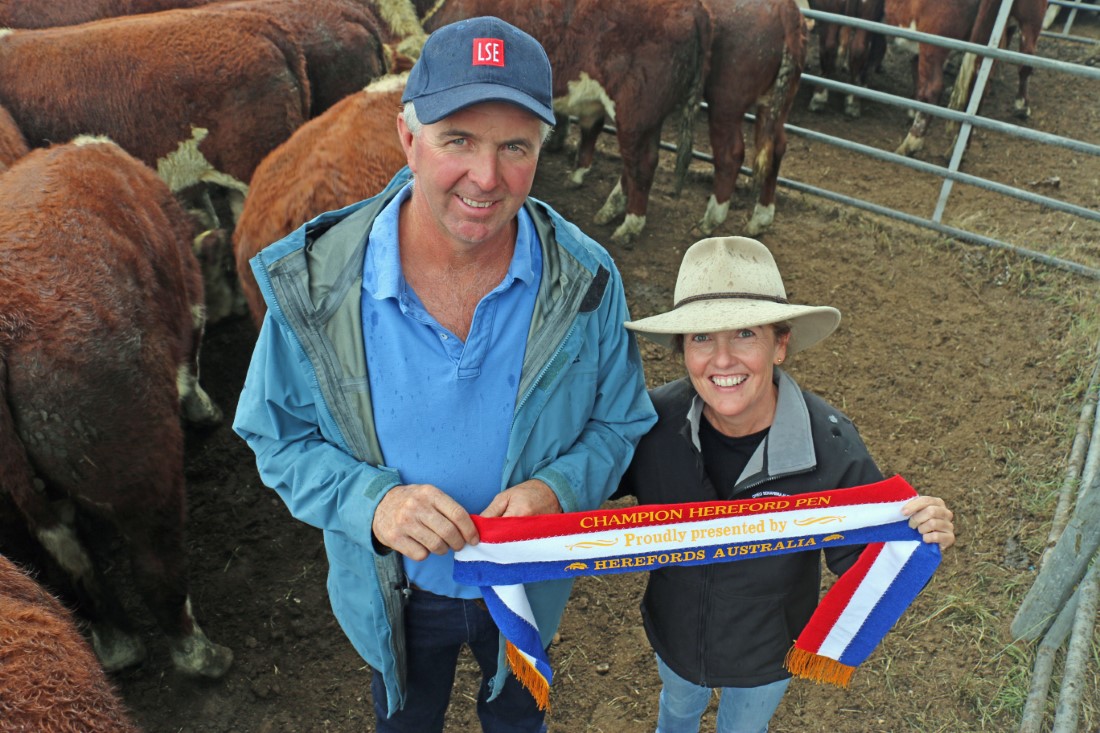 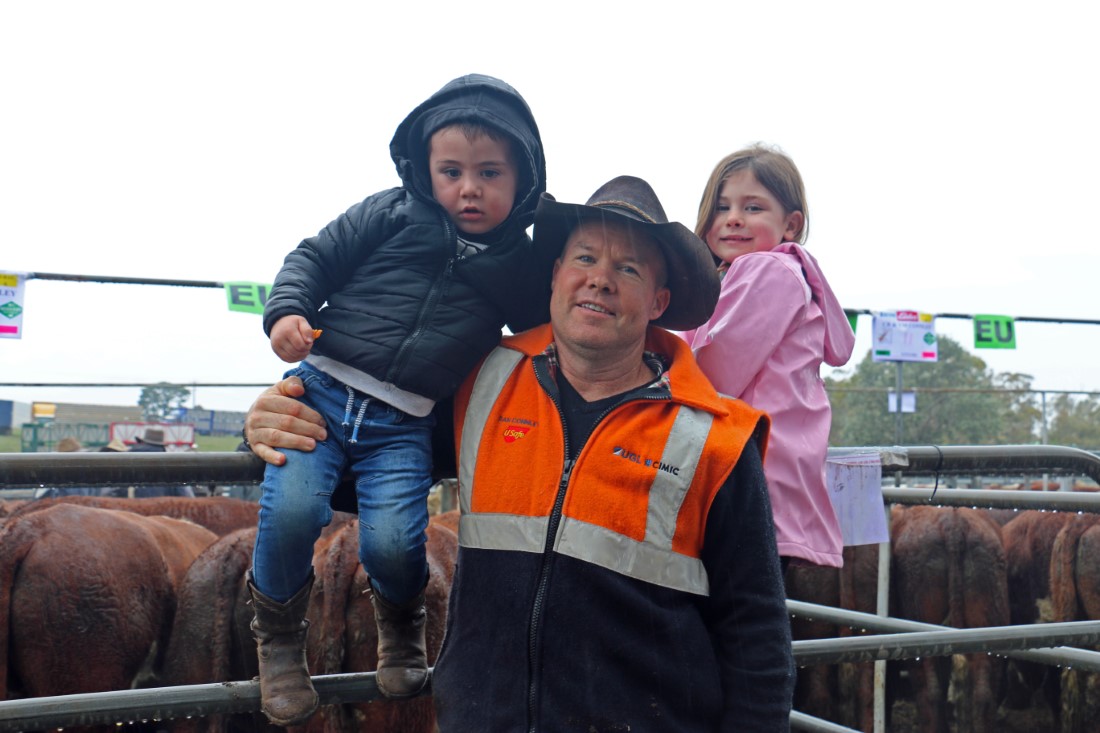 Dan Connley, with children Jimmy and Lacey, and his parents spring drop Hereford steers which sold for $1750. 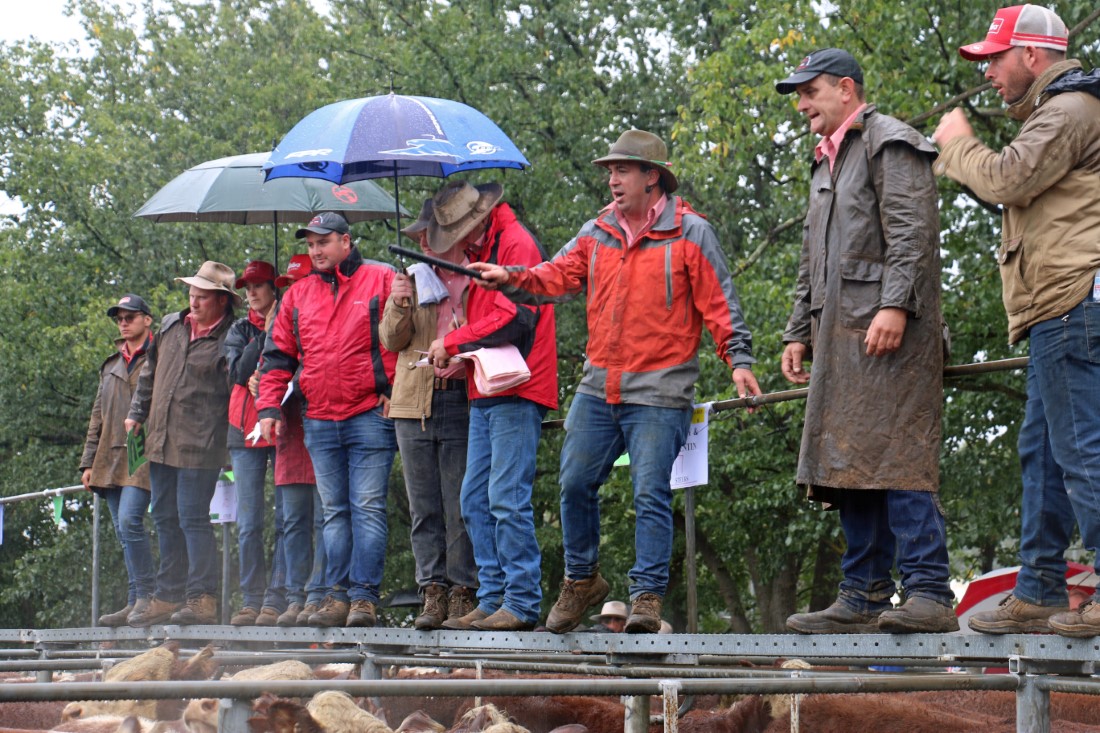 Elders Bairnsdale auctioneer Morgan Davies and his team brave the downpour at the Omeo Weaner Sale. 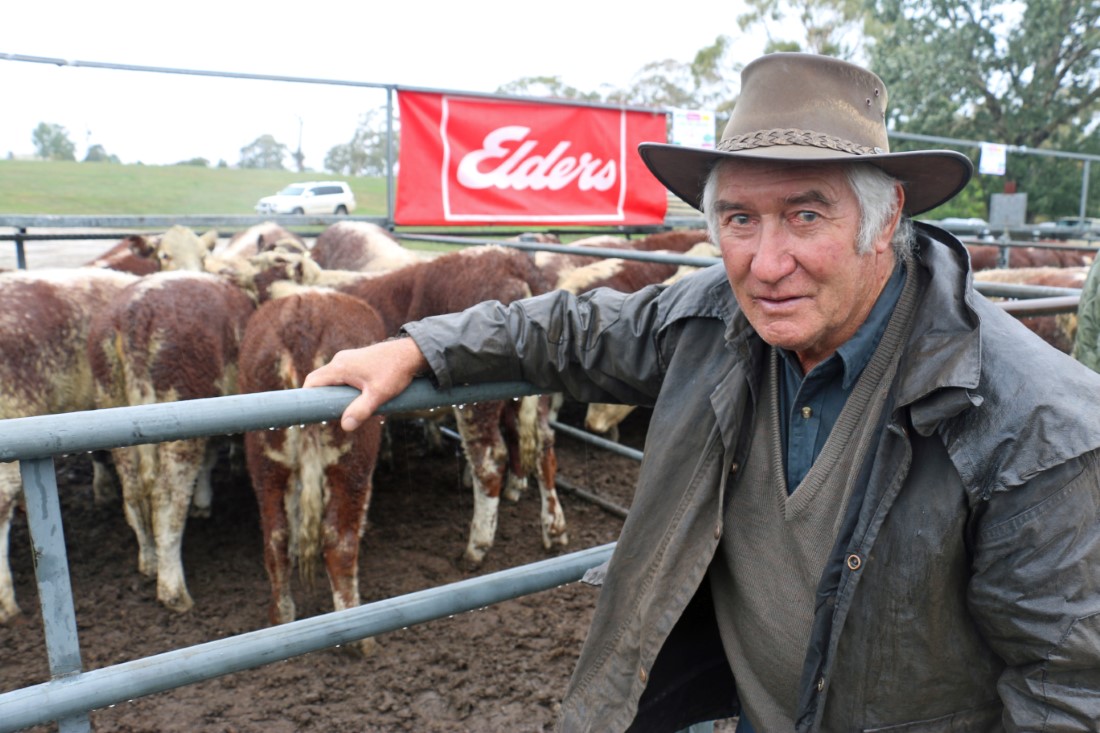 Bert Ahsam, Omeo, has never seen heifer prices like it in his life. His top heifers sold for $1810 and his steers for $1630. 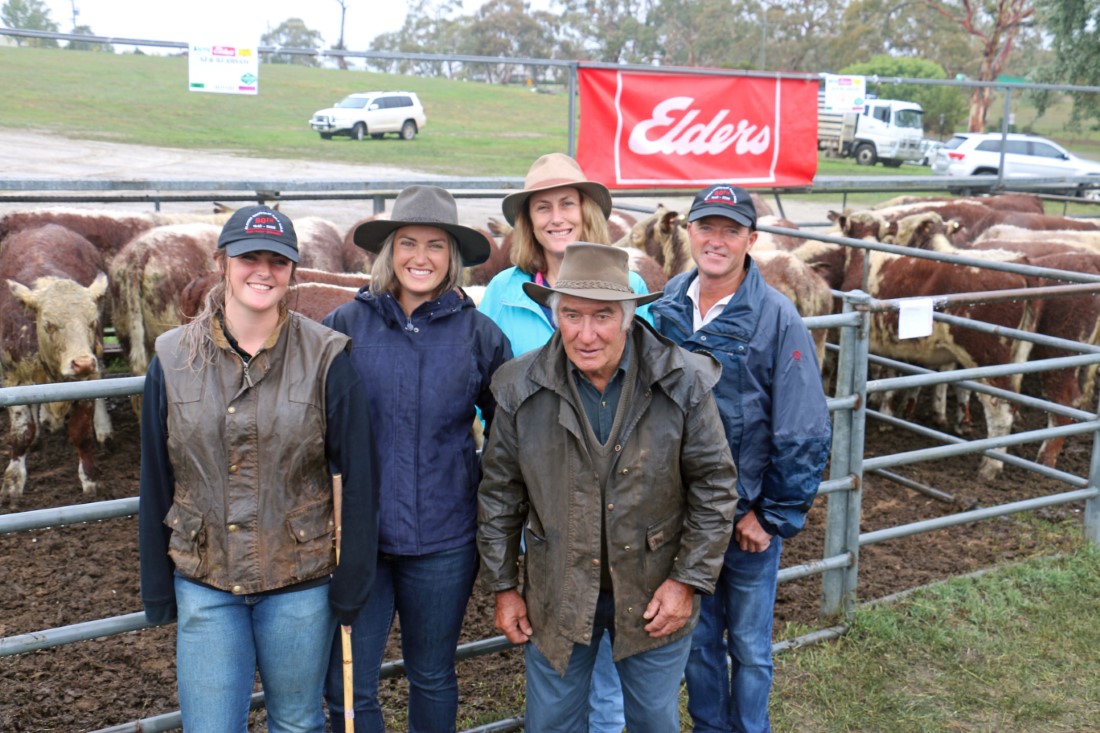 The Ahsam family celebrate topping the market with their Shorthorn/Hereford heifers and setting a new record for Omeo. From left Sophie, Indi, Tracey, Brendan and Bert Ahsam.