Cross-Breeding Lifting Demand for Hereford Bulls in the U.S. 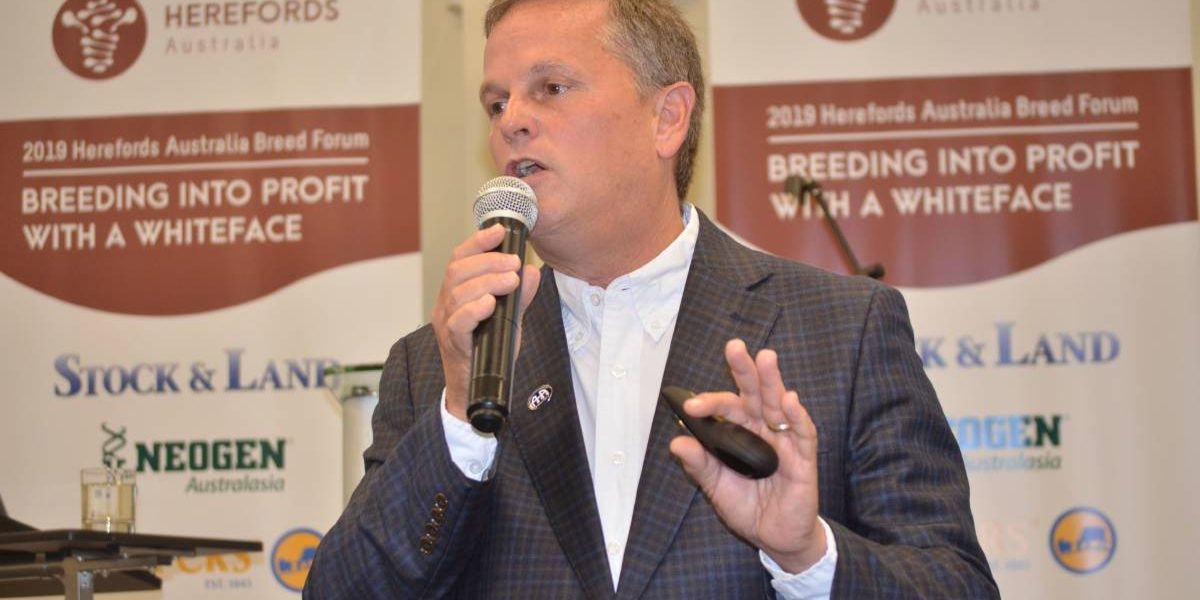 There has been a definite increase in demand for Hereford bulls in the United States due to growing awareness of the benefits of crossbreeding in commercial herds, according the American Hereford Association Executive Vice President; Jack Ward.

Mr Ward was the keynote speaker at the 2019 Herefords Australia Breed Forum, held in Hamilton, Victoria on June 11 and 12.

Mr Ward addressed the 150 forum attendees on the benefits of Hereford genetics in U.S commercial cow herds, with particular emphasis on the impacts of crossbreeding on profitability.

There was some initial hesitance in the U.S. towards recognising the benefits of heterosis for several reasons, including that producers tended to be loyal to one particular breed and saw purebreds as better.

Due to this mindset there had historically been active resistance to crossbreeding by seedstock producers and breed societies, but since the American Hereford Association began promoting the benefits of heterosis, membership, registrations and female inventory numbers within the society are on the rise.

The biggest advantage from heterosis can be seen in the lowly heritable traits such as fertility, longevity, health and efficiency. Heterosis has also shown to have a large net positive cumulative effect.

The ‘2000 Bull Project’ in the USA identified that apart from Brahmans, Herefords were the most distantly related breed to all other British/European breeds and therefore crossbreeding with a Hereford offered the most benefits through heterosis.

The American Hereford Association has been undertaking a research project similar to the Herefords Australia Black Baldy Trial, where 600 commercial Angus females were bred to 10 A.I. Hereford sires.

Within the project conducted at Circle A Ranch in Missouri, traits of economic importance were measured (calving ease, weaning weight, yearling weight, feedlot gain, feed efficiency and fertility of the F-1 females.)

Three Angus sires with similar breeding averages to the Hereford bulls were used for the control group.

The results of the project found that the Hereford-sired calves were marginally heavier at birth, but no extra calving problems occurred.

The Hereford-sired calves were on average 5.4kg heavier at weaning and almost 6kg heavier in carcase with a three-quarter-inch higher ribeye area.

There was a seven percent increase in conception rates in the crossbred heifers and the animals had a better temperament.

A similar project was conducted on Harris Ranch in California and found that Hereford-sired calves had higher average daily weight gains (DWG) and there was a significant advantage on dry matter intake and cost of gain.

An overall net return of $30 was seen in the Hereford-sired steers.

Mr Ward reported that Dr. Vern Pierce had developed an economic model that showed a $514 net advantage over the life of a cow due to increased fertility and longevity along with the incremental advantages in weights, carcase results and feedlot performance

However, Mr Ward pointed out that it was important that Hereford seedstock producers were producing the right genetics for commercial operations.

Hereford genetics do have a place in the commercial cowherd, but seedstock producers must ensure they are focussing on economically relevant traits.

Mr Ward also said that it was important for producers to decide their own place within the industry and to understand that they can’t be everything to everybody.

The American Hereford Association is pushing for further genetic progress within the breed and has implemented mandatory whole herd reporting for their breeders.

All American Hereford breeders must submit calving ease data and weaning weights, and all other traits need to be submitted on a whole herd basis, e.g. yearling weights for the whole calf drop, not just potential sale bulls.

If breeders are not compliant with this system within two years, the EBVs for that herd are switched off.

“In order to make genetic progress you have to be involved,” Mr Ward said.

As a result of the crossbreeding push and faster rates of genetic gain there has been an increase in Hereford bull sales in the U.S. in the last few years.

“There has been a definite increase in the demand and value of Hereford bulls,” Mr Ward said.