Live export order pushes up heifer prices by $360 at Benambra 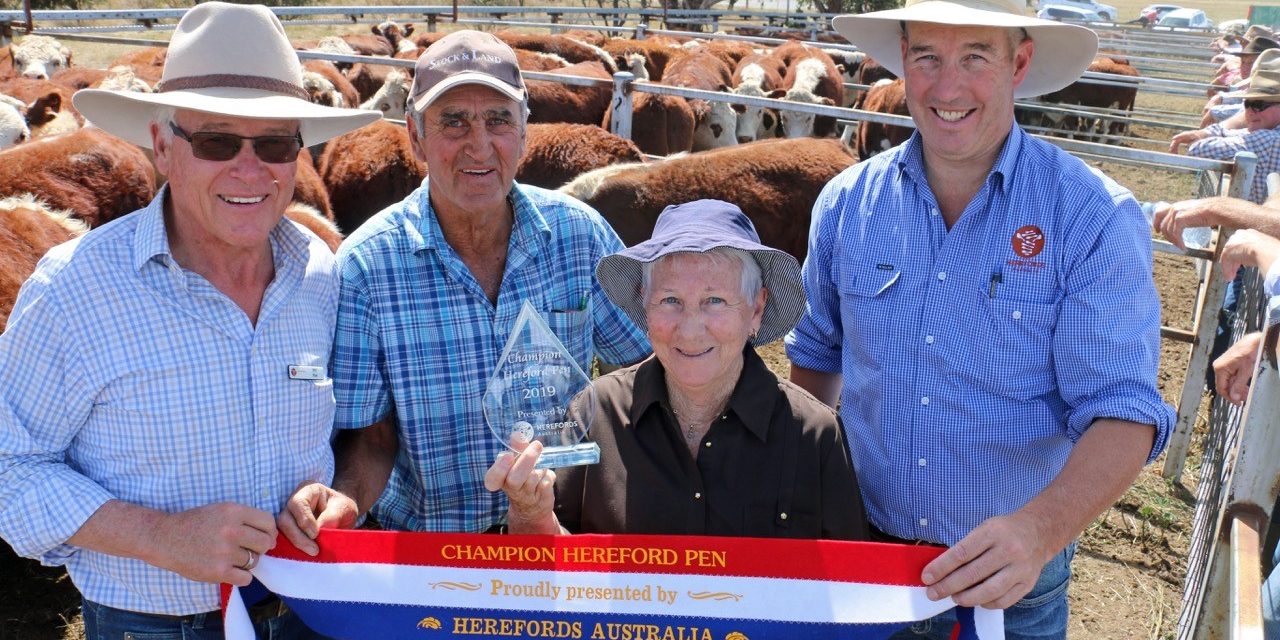 An international live export order for Hereford heifers injected an element of excitement into the Benambra Weaner Sale, with female prices tracking the steers.

A big crowd of buyers and vendors descended on the Benambra yards for the opening Elders fixture of the 79th annual Mountain Calf Sales on March 12.

The selling agents penned 1700 Hereford, Hereford cross and Euro steers and heifers, with quality, weight and prices lifting markedly on the morning calf sale at Hinnomunjie

Mr Ward bought 126 lighter weaners and 118 of the heavier end, putting a floor in the market which jumped $360 for heifers on the Hinnomunjie sale.

The opening pen of heavy grown steers topped the sale at $1100 for vendor Donald Betts while the autumn drop calves made to a top of $970 for Kelvin and Jackie Pendergast, Benambra.

Kelvin and Jackie offered 29 steers and 44 heifers, retaining 20 heifers at home, and the price exceeded their expectations of $900.

The Karoonda, Basford and Nunniong blood steers had been weaned for a month, supplementary fed with hay and were snapped up by Elders Deniliquin for $970.

Offering 61 steers and 35 heifers, Graeme Pendergast said the Hereford breed had showed its renowned ability to thrive in tough times during the drought.

He selects his bulls on growth, muscle, fat cover and temperament. Graeme had sold black baldies in mid January for $950 so was hoping to exceed that with the April-May drop Herefords.

“We’ve got to be happy with the prices today as we have no grass and no water,’’ he said.

David Hill, Elders Omeo, described the sale as an “outstanding result’’ for the district.

“We had a magnificent line up of cattle considering the season they have been through – the later bush country at Benambra had a bit more of a spring and the cattle have really shone through with their breeding,’’ Mr Hill said.

“These cattle were held onto on the basis of a break and as there was no break the middle run sold 20-30c/kg under our forecast.

“There were a couple of prominent orders, certainly in the heifers, but in the steers we saw restocker buyers and even local producers who have changed to a grass finished operation.

“It was hard to purchase cattle for under $800 in the lead run of steers.’’

Mr Hill said it was comforting to see heifers bought out of the sale as breeders for a live export order.

“There has been a lot of talk in the industry in the last six months of herd reductions and the number of females on offer in the mountains will be drastically reduced,’’ he said.

Mr Kee said the order had created a premium for Herefords Australia members at the sale.

He said the order injected confidence and faith into the breed, with international buyers seeing value in Herefords as breeding stock.

“This is great acknowledgement of the benefits of Herefords,’’ Mr Kee said.

“We were aware there was likely to be this demand for them at the sale and one of the good things is we have the whole Hereford board here to support those people.

“We have been able to co-operate with the agents to ensure that happens as a breed.

“It shows there is value in being Herefords Australia members and the fact they are breeding Hereford cattle.’’

Lot feeder James Sage, Boonooke Feedlot, Conargo, was active in the opening run of heavy steers, securing 107 head at 350kg plus, with the assistance of Ron Rutledge, Elders.

Mr Sage said the Hereford steers would be backgrounded for a month to 400kg before being grain fed for 100 days.

Boonooke Feedlot is operated by Australian Food and Agriculture, and runs 3000 Ironbark blood Hereford breeders in one of the largest commercial herds in southern Australia.

“The Herefords here today are beautiful – these guys do a good job on their cattle up here,’’ Mr Sage said.

“Last year was the first year I have bought here, the cattle performed well so I came back again.’’

Vendors Clive and Di Anderson, Benambra, were pleased to top at $940 for their Herefords and received the top black baldy price of $910 at the Omeo Angus sale.

“We weaned the calves a little later being so dry and they have done really well,’’ Mr Anderson said.

“The sale was good on the day and the heifers were very strong.’’

In the heifer pens, Richard and Anne Faithfull rang the bell with a pen of 12 European Union accredited Herefords making $965.

Mr Faithfull said his April-May drop steer portion had averaged around 320kg and were finished on pasture at his Beloka property before topping at $960.

“The country has been good until now and I haven’t had to feed a bale of hay out,’’ he said.

Among the buyers was Kim Greig and Karen Giffith, Buffalo, buying three pens of 49 steers for grass finishing to heavy weights.

The couple sell their steers over the hooks to O’Connor’s at Pakenham, with 100 head sourced out of the Benambra sale over the past two years averaging $2200.

“These cattle are good value buying and with good breeding – we like the Herefords as they grow out nicely and have a quiet temperament,’’ Mr Greig said. 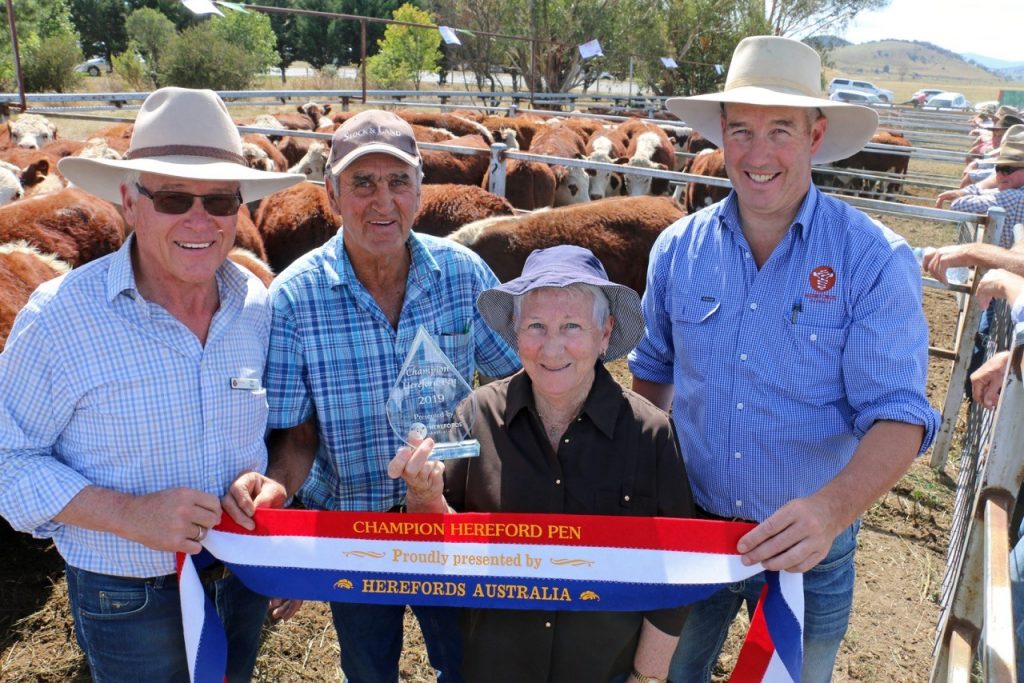 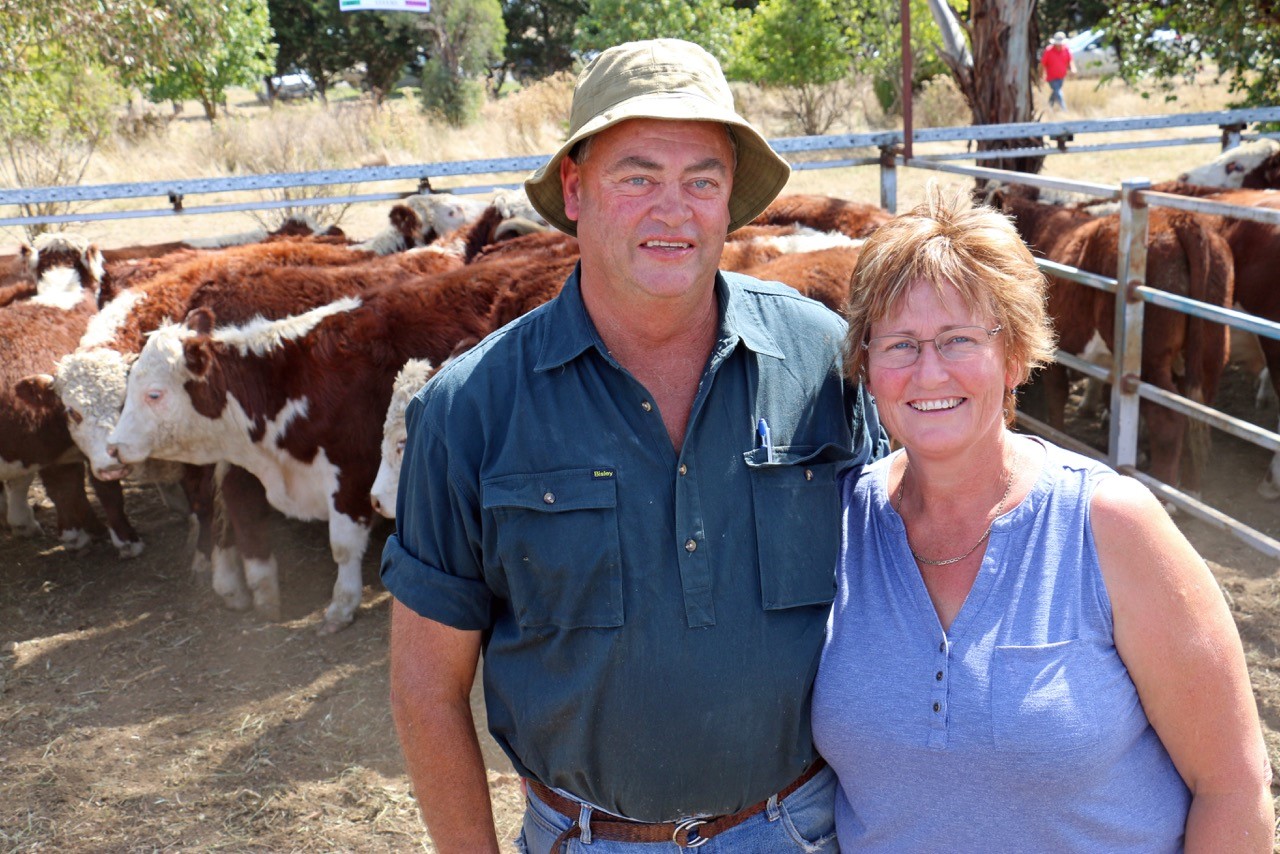 Kelvin and Jackie Pendergast, Benambra, topped the autumn drop weaners at $970 with their EU accredited steers. 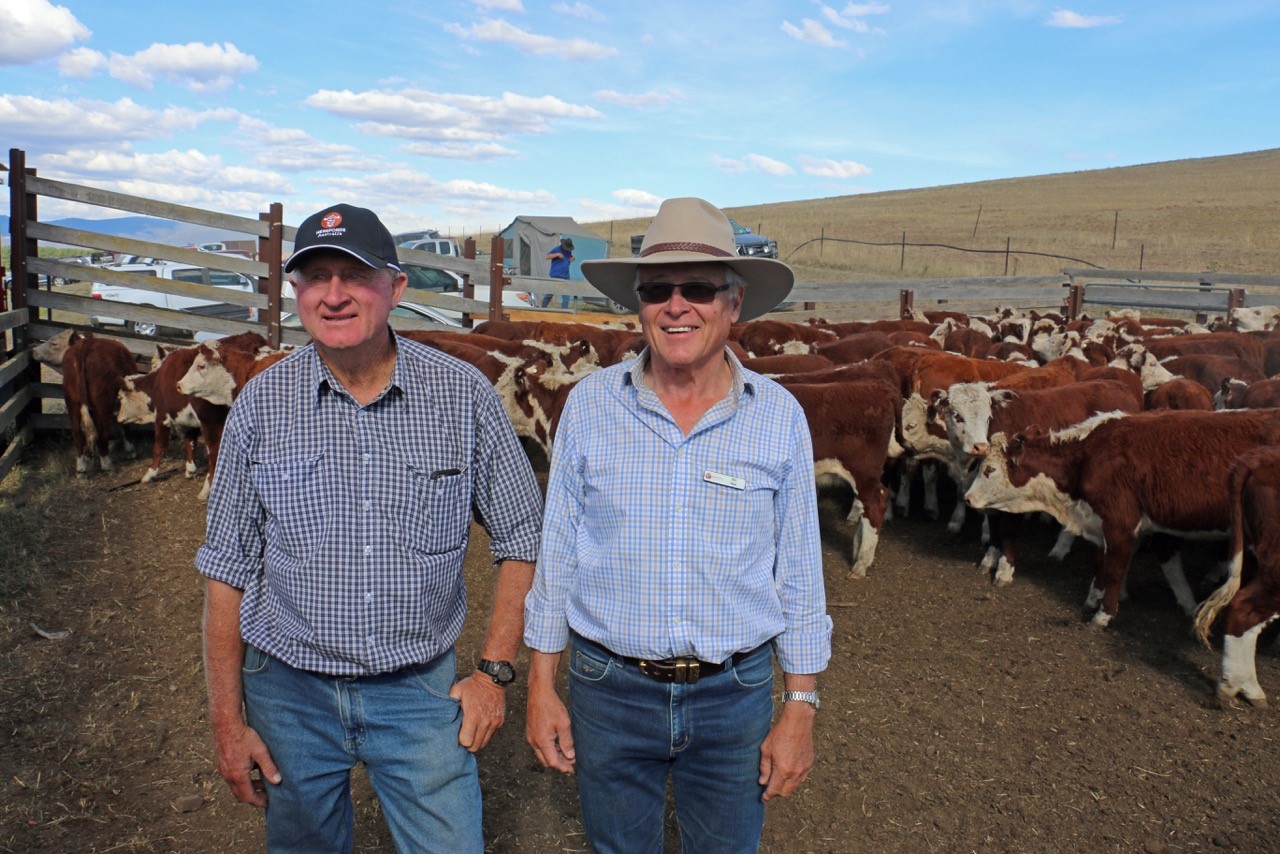 Herefords Australia director Pat Pearce and chairman Bill Kee with purebred heifers sourced out of the Benambra Weaner Sale and bound for an international breeding program in Kazahstan. 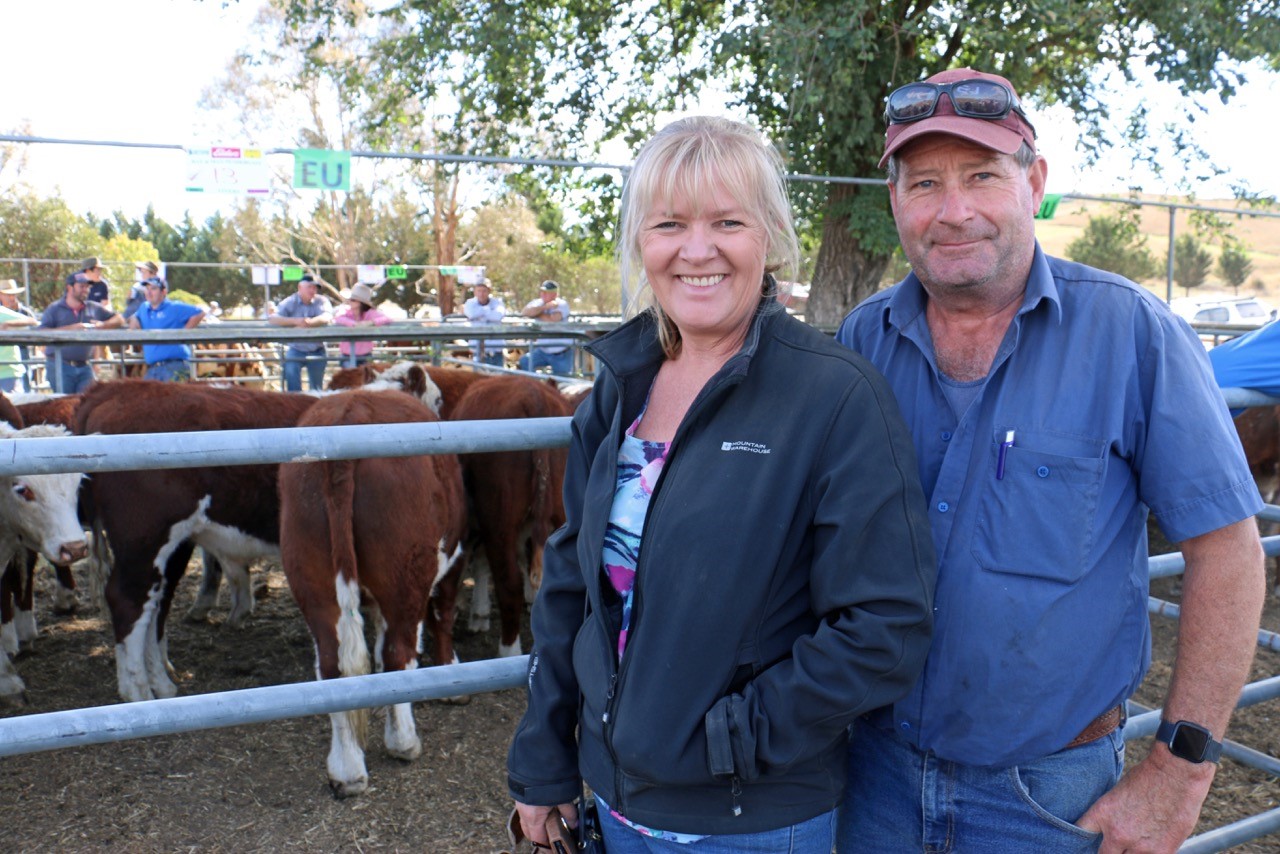 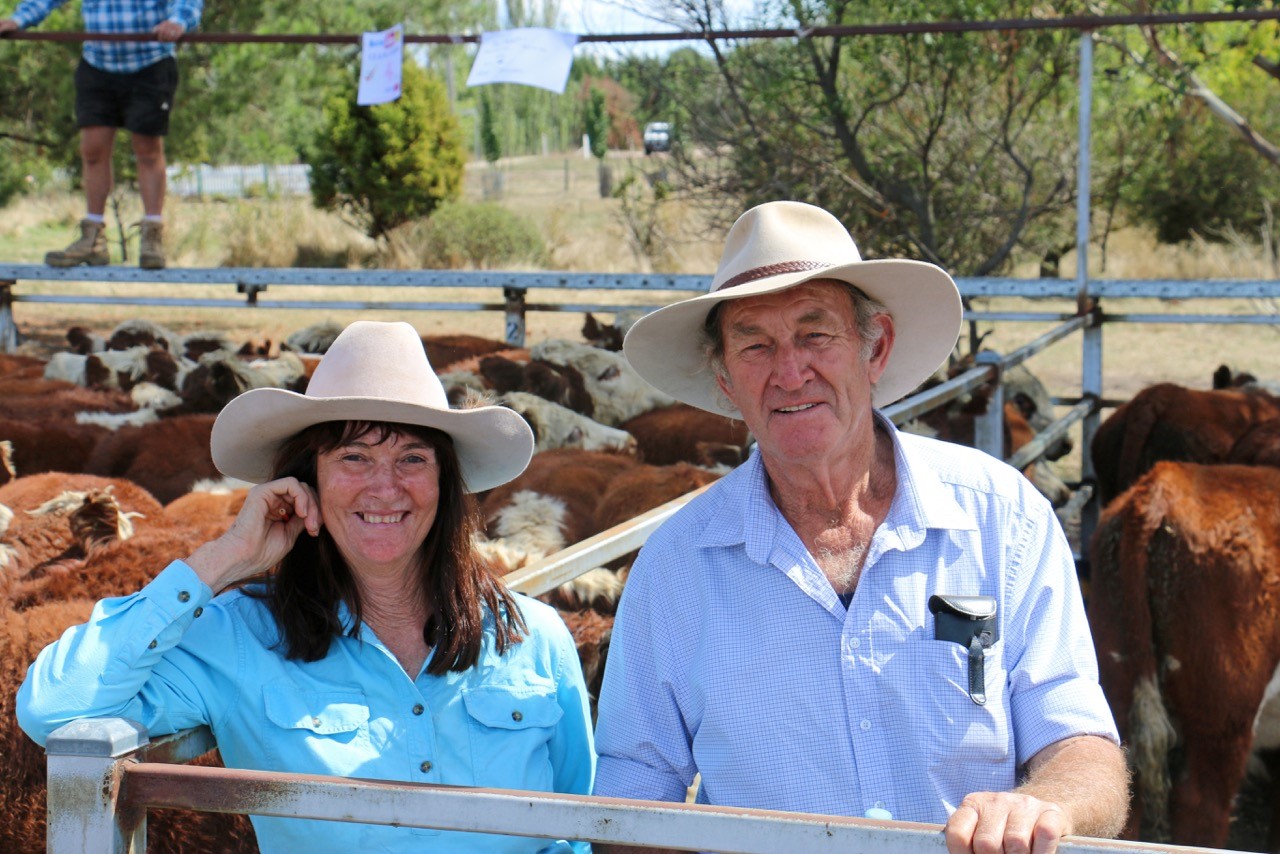 Di and Clive Anderson, Benambra, sold their top pen for $940 and seconds for $850 at the Benambra Weaner Sale. 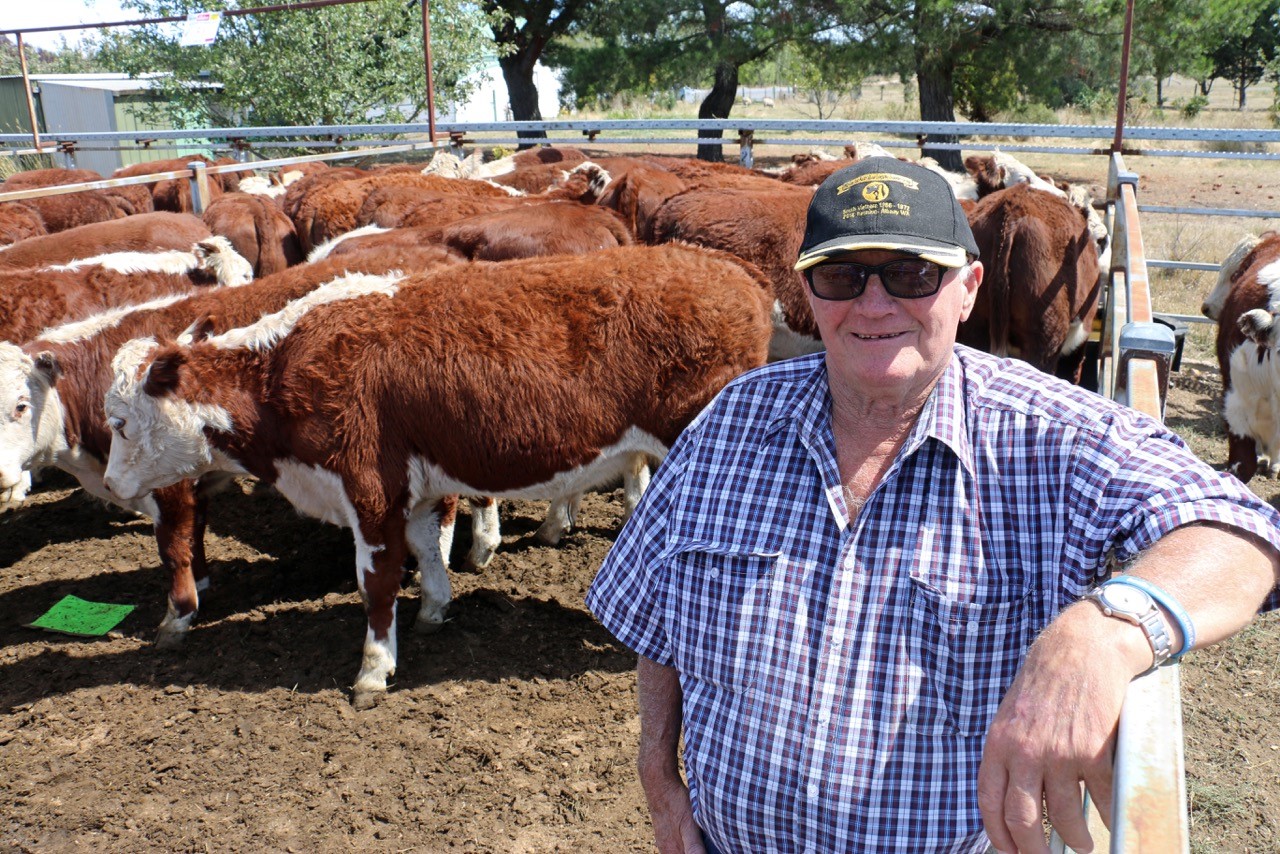 Richard Faithfull sold this pen of 26 EU accredited steers for $960 to Elders Deniliquin. 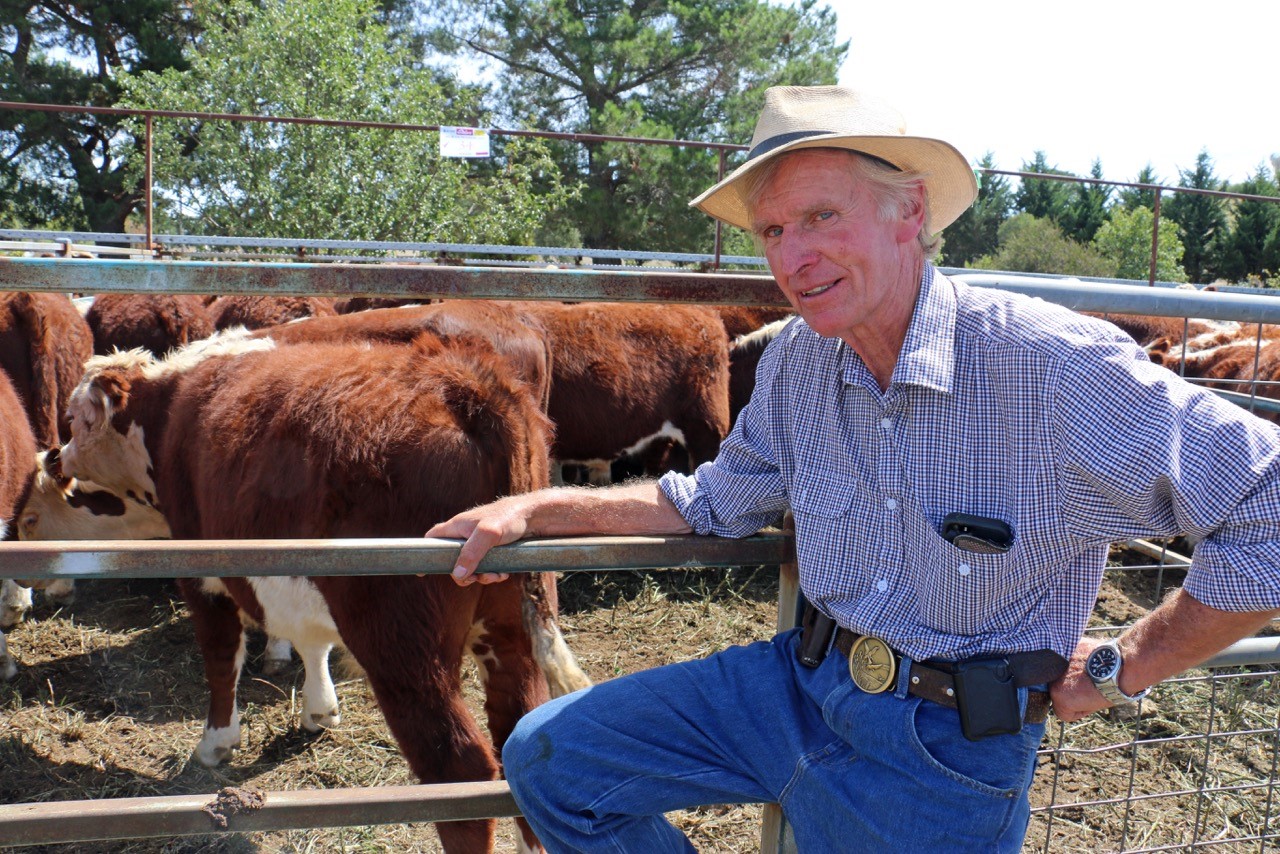 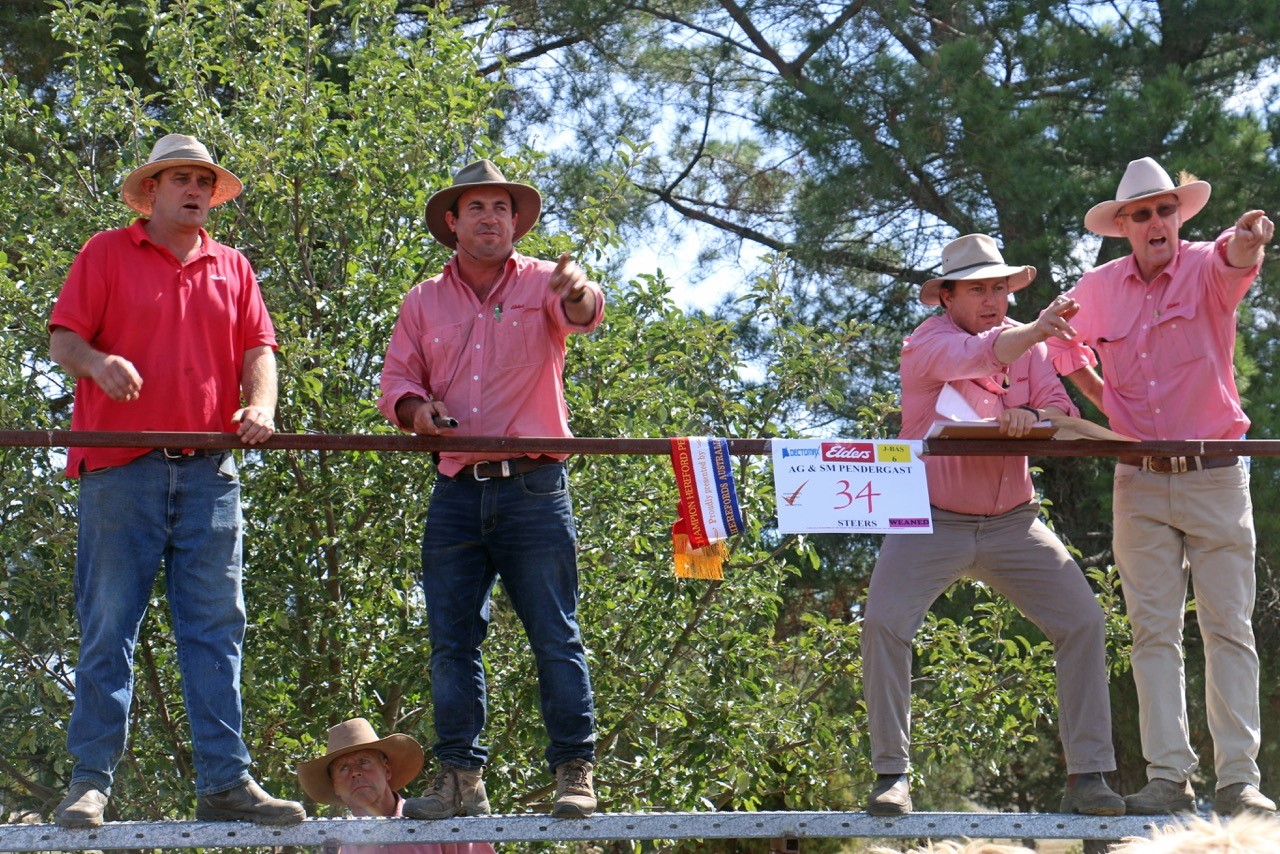 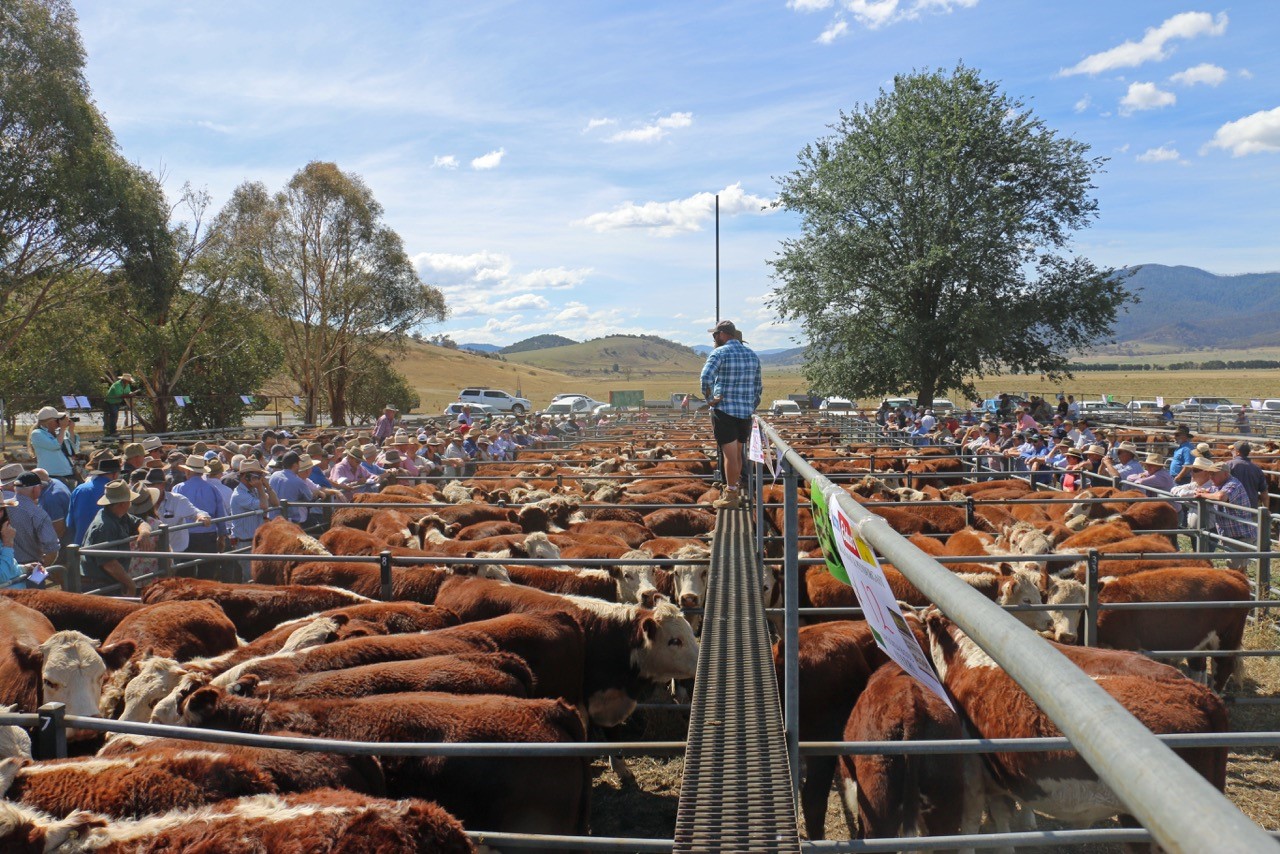 The large crowd of buyers and vendors at the Benambra Weaner Sale saw steers sell to $1100 and heifers to $965. 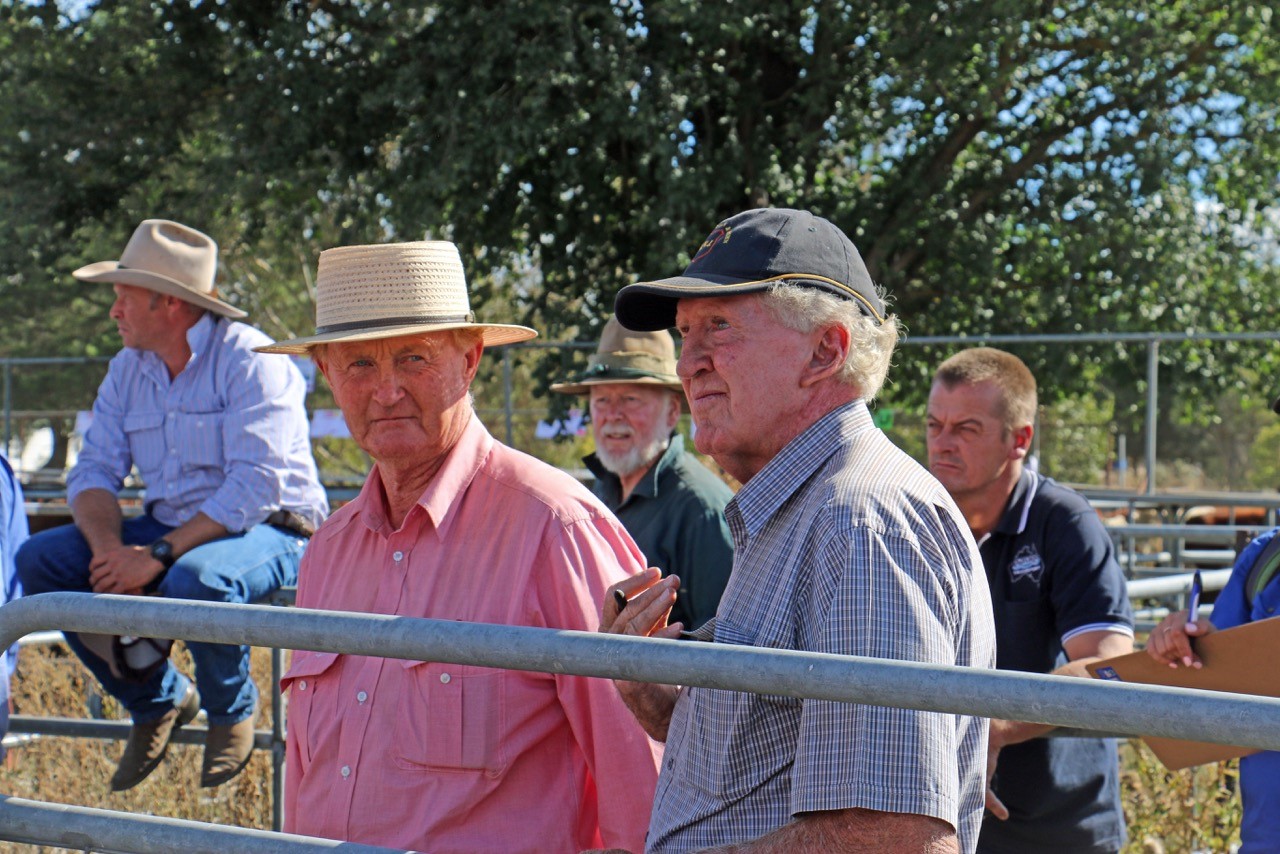 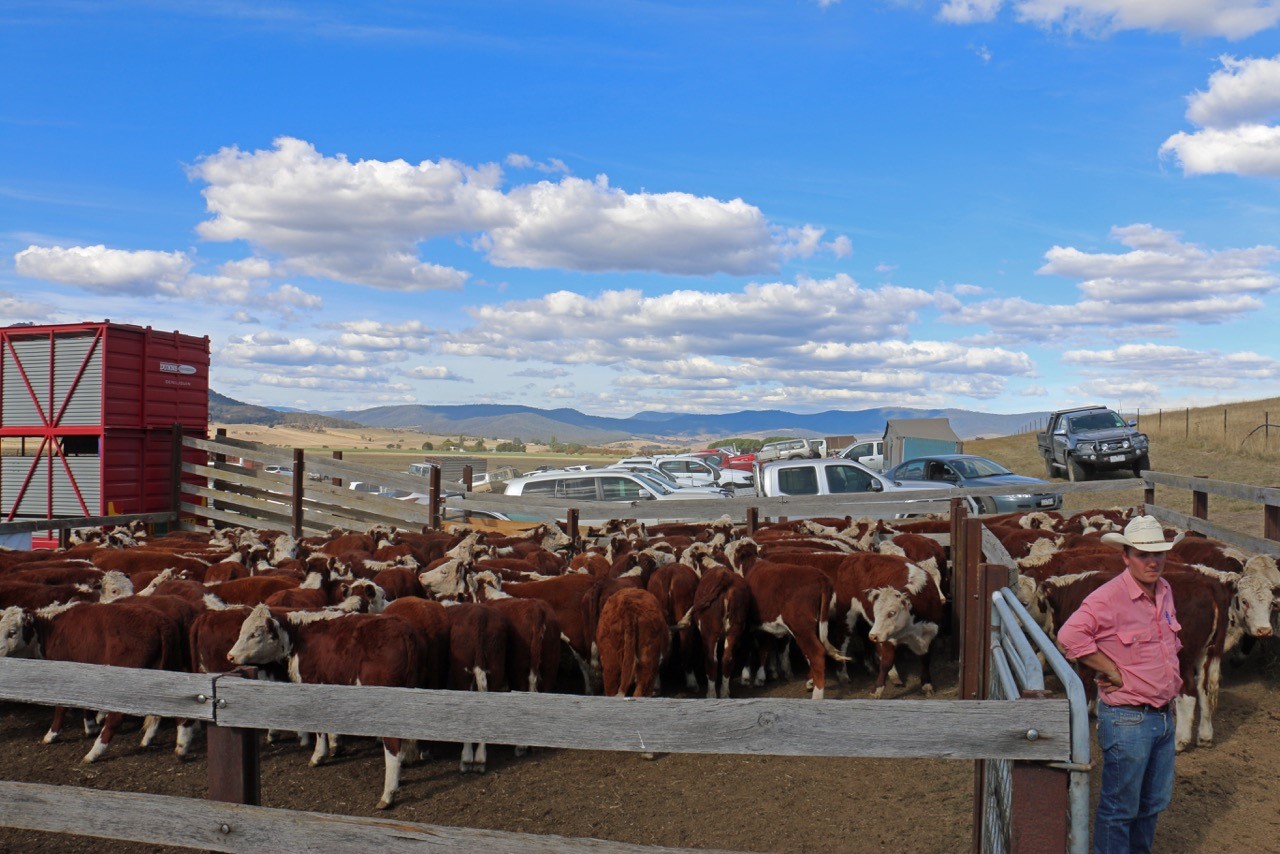 The Hereford heifers ready for trucking out of the Benambra yards for a destination in Khazikstan.