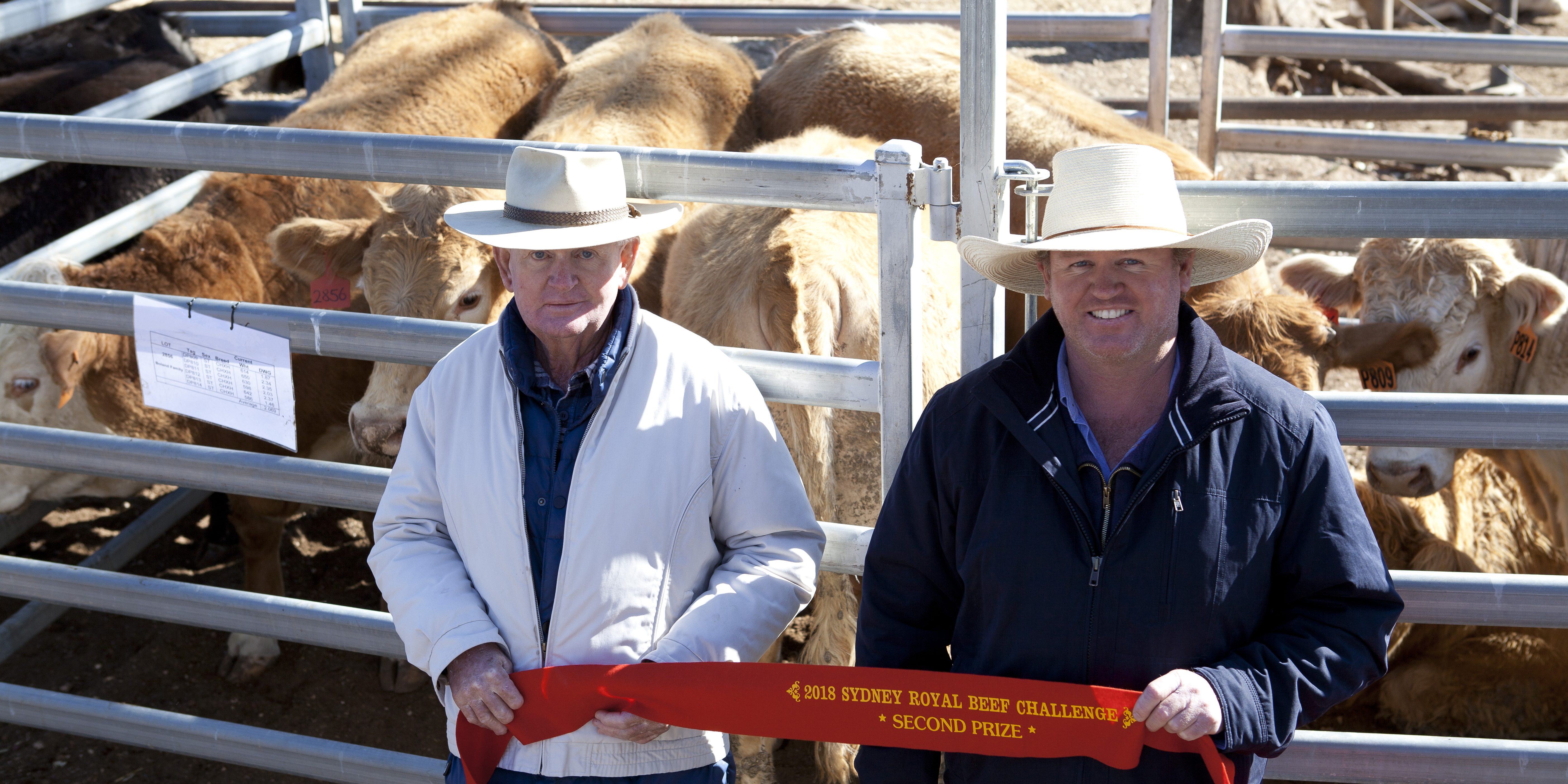 Several pens of Hereford infused cattle have come away with wins in various categories of the 2018 RAS Beef Challenge.

The awards for the annual feedlot-based competition were held in Tamworth on Friday 14 September.

Held at the Wilga feedlot in Bellata, the competition is split into two classes; the 70-day Domestic class, and the 100-day Export class.

Throughout the competition animals are assessed at all levels of the production process, from daily liveweight gain through to eating quality.

In the Export class live assessment the first and second placed pens were Hereford Charolais cross steers exhibited by the Sommerville and Boland families of Casino, NSW.

There were 26 pens entered in the Export class of this year’s Beef Challenge, which according to Wilga feedlot manager Mike MacCue is about 10 teams less than previous years.

In the Domestic live assessment, a pen of Hereford Santa cross steers entered by the Smith family (also of Casino) placed third, with one animal from the pen being awarded second in the individual live assessment.

The Fuhrmann’s steers also placed second for profitability and were placed third in the Domestic class overall with 727.85 points.

Domestic reserve champion individual was also awarded to one of the Fuhrmann steers, which gained a total of 121.94 points throughout the competition.

Third place in the Domestic feedlot total was won by Figtree Pastoral Co with a pen of Hereford Santa cross steers, one of which placed third individually.

The Domestic carcase grid was won by JW and M Smith, with a pen of Hereford Santa cross steers which scored an impressive 133.33 out of a possible 150 points.

In the Domestic carcase judge section of the competition, Southern Border Pastoral Co placed third with a score of 147.37 with a pen of Hereford Santa cross steers.

Second place in the Domestic taste test was awarded to a pen of black baldy steers entered by Dobkin Pastoral Co.

The steer was awarded 43.34 points and a Sydney Royal Silver Medal in the taste test.

One steer placed third in the individual daily weight gain, averaging 2.665kg/day and being awarded 19.036 points.

A second Truro steer placed third in the individual feedlot total and second for profitability.

According to Scott Hann the RAS Beef Challenge is a great opportunity to compare against other producers and other breeds.

“The competition encompasses all breeds, so everyone has a crack at it.

“It’s a great way to benchmark yourself against everyone else.” Mr Hann said.

Although the dry season affected the cattle numbers and incoming weights in this year’s competition, Wilga feedlot manager Mike MacCue said the average in the competition was still good.

“Most cattle in the competition averaged just under 2kg/day. 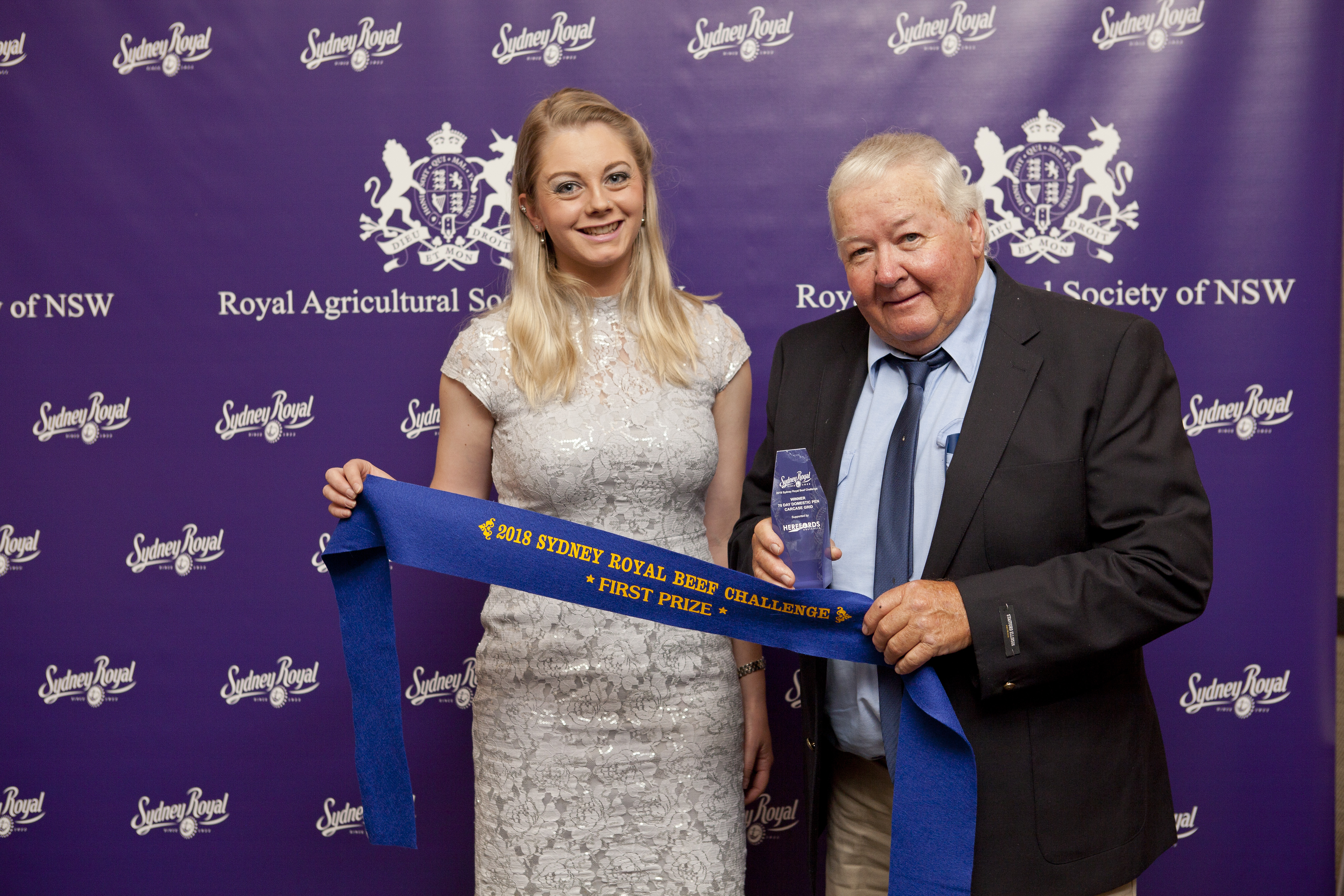 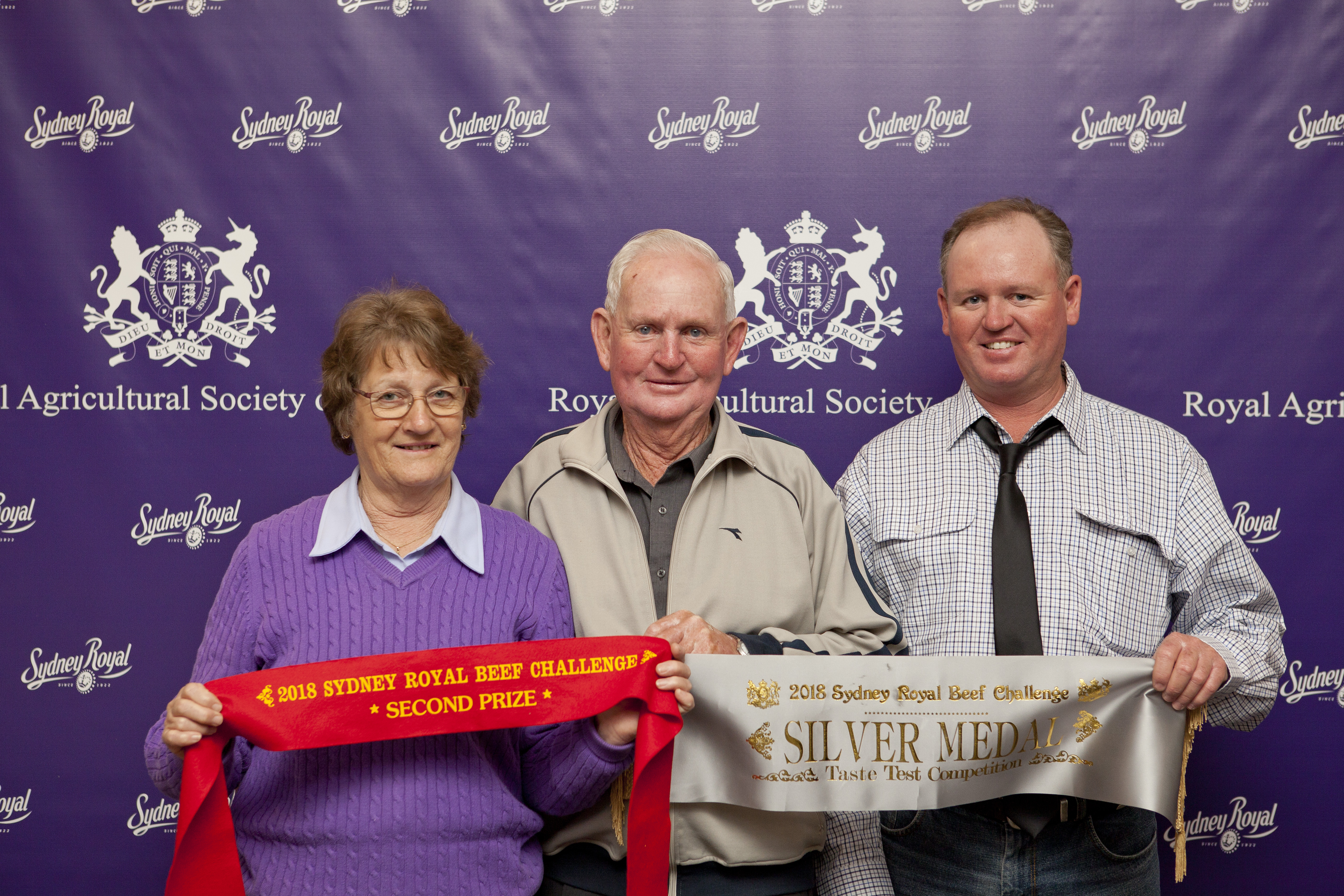 The Boland family were awarded a Sydney Royal Silver Medal in the taste test section of the competition. 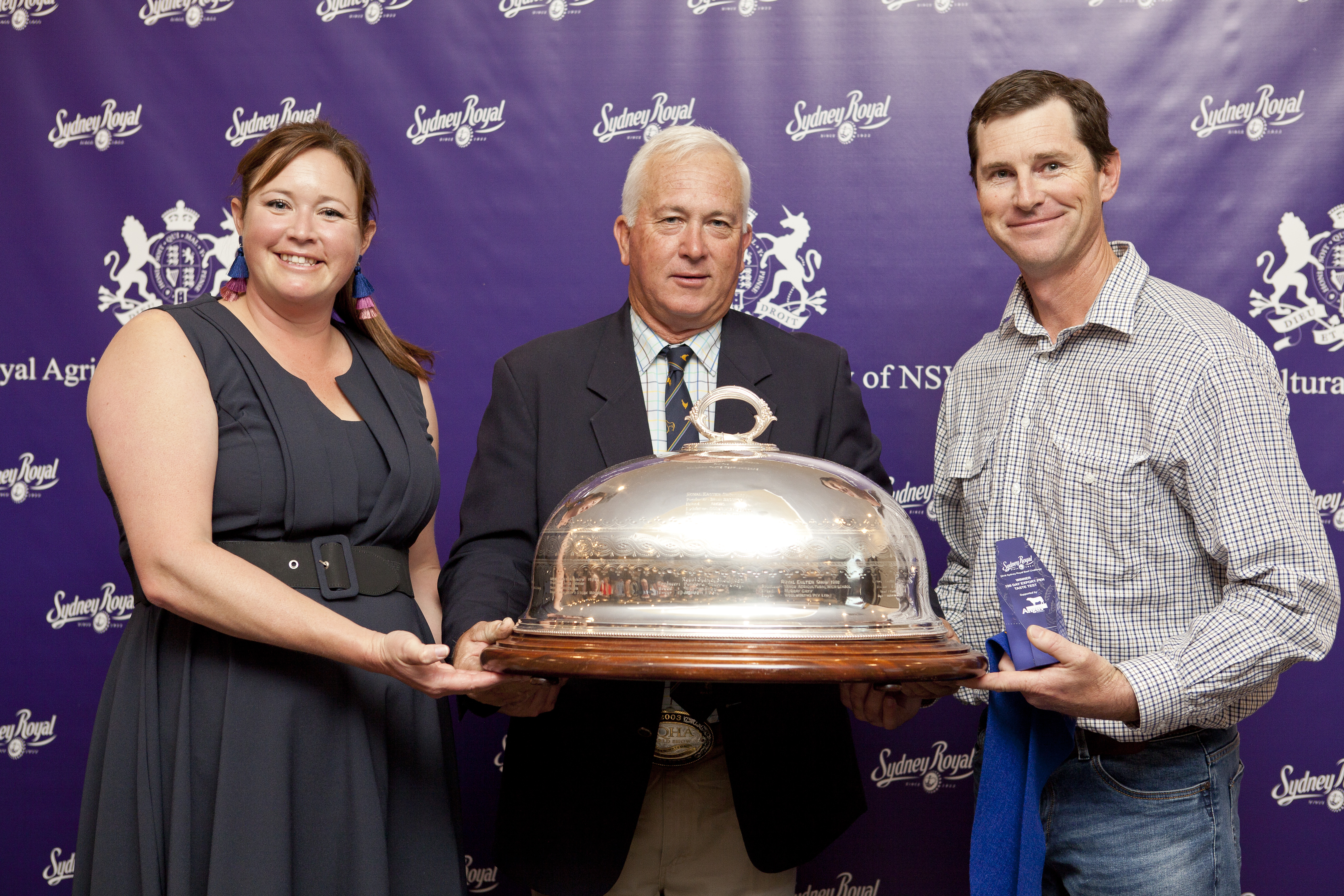 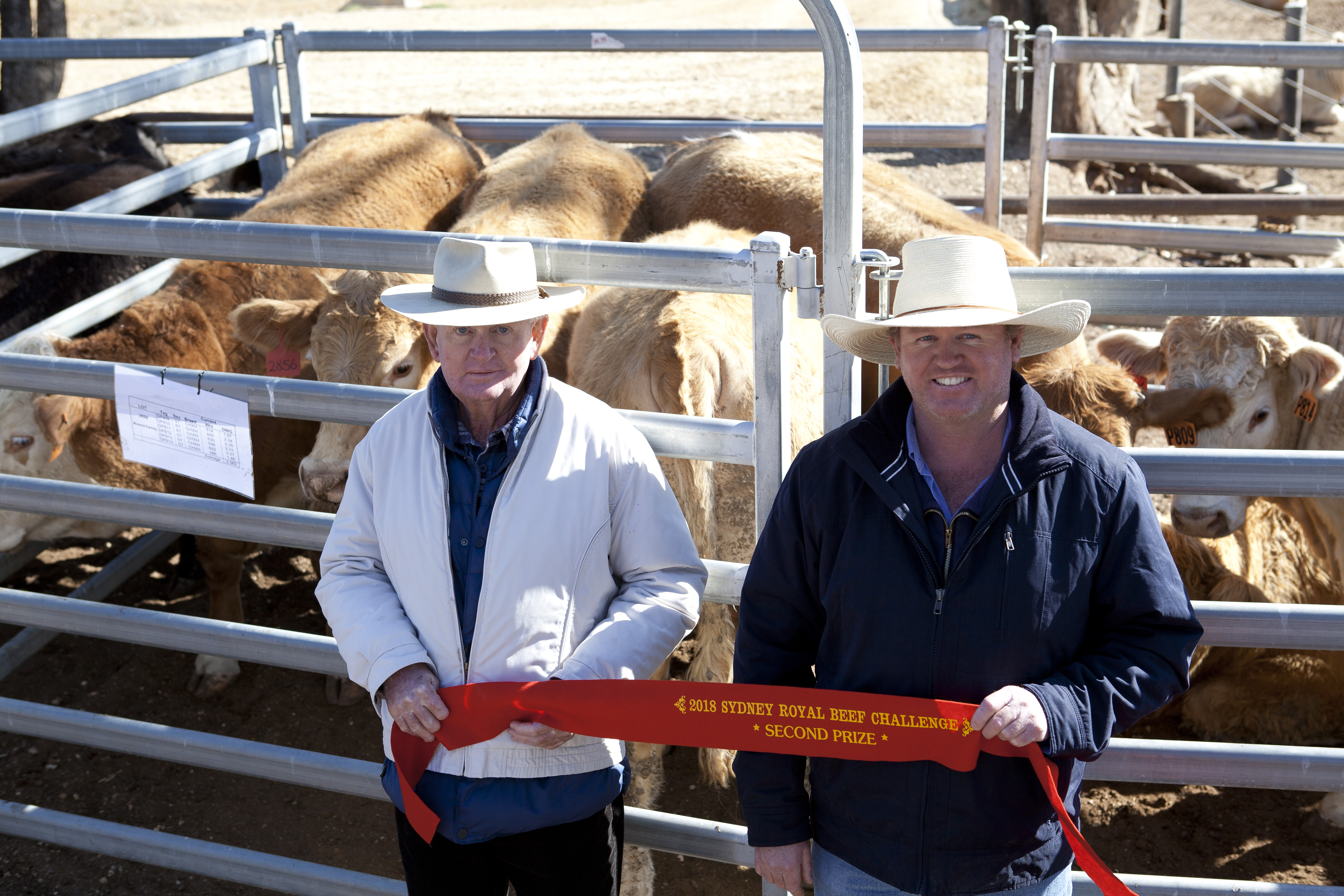 Paul and Stephen Boland with their pen of Hereford Charolais cross steers, which placed second in the Export live assessment.