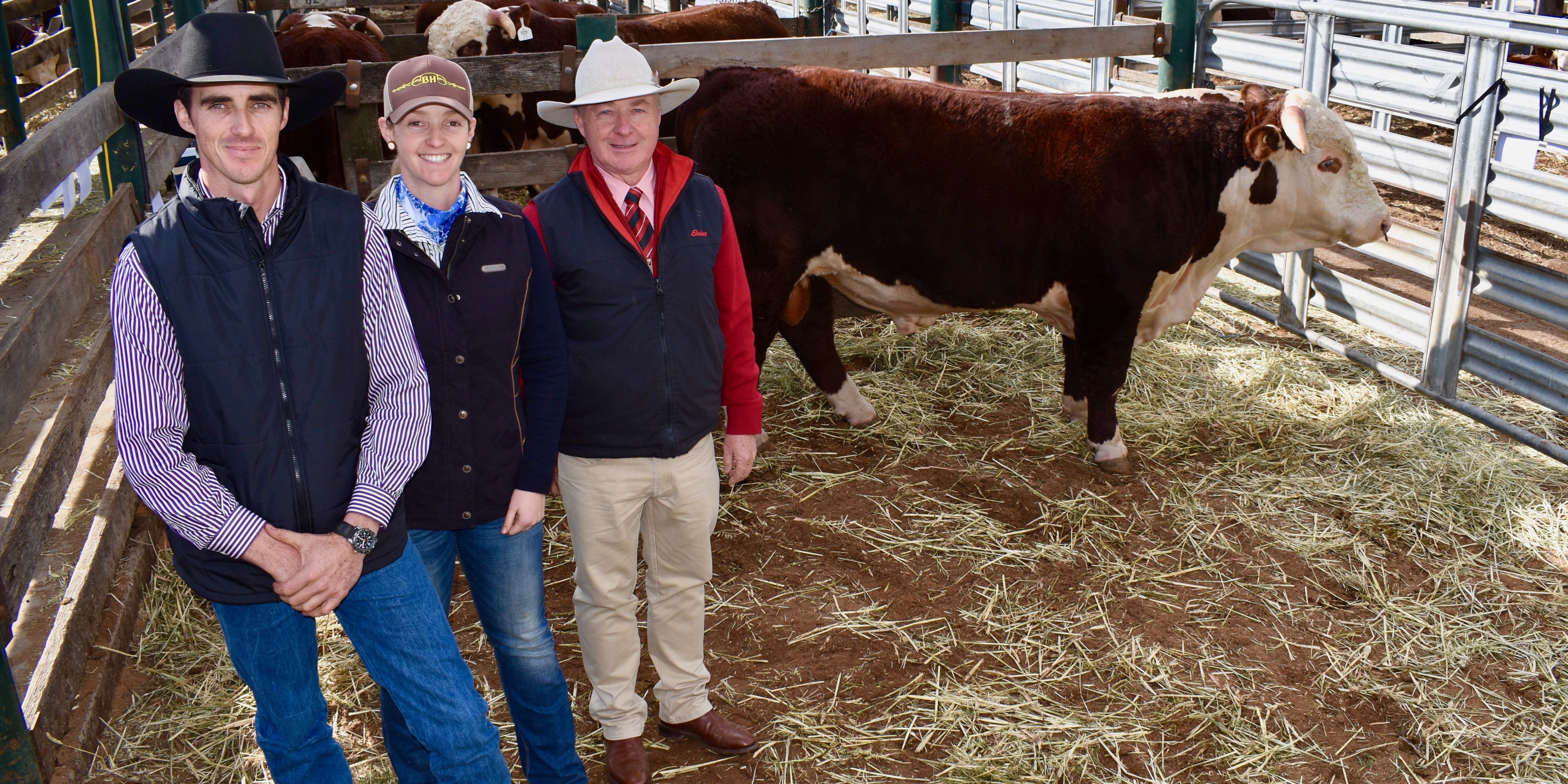 Despite the dry conditions across much of Australia, the sale drew 70 registered stud and commercial bidders from across Queensland, New South Wales and Victoria.

Sale committee chairman Angus Vivers rated the sale as tough but was pleased with the average.

“It was a tough day but considering what’s happened all throughout New South Wales [weather wise] it’s good to have that $5973 average,” Mr Vivers said.

Heated bidding for the powerful all-rounder, Lot 1, Battalion Undertaker M023 (ET) (H) got the sale underway with the hammer coming down at $20,000.

Sired by Cara Park Unique J324 (AI) (H) and out of a strong Constance maternal line, Undertaker was too good an opportunity to let go for buyer Barry Newcomen.

“He has good figures and is structurally sound, and that’s important, he has good overall balance,” Mr Newcomen said.

According to Mr Newcomen, there has also been interest from Ireland in Undertaker’s genetics. The added possibility of semen exports, on top of an impressive set of BREEDPLAN figures and strong pedigree was another big selling point for Undertaker.

It’s not the first time Mr Newcomen has taken an interest in the Battalion program, having been an underbidder on the record setting Battalion Black Hawk, which sold for the record price of $45,000 at the 2016 Glen Innes sale.

“I bid on Black Hawk two years ago, and have since used Black Hawk straws in my AI program. The first calves are on the ground now and so far they look good,” Mr Newcomen said.

Battalion stud owners Grant and Kylie Kneipp have enjoyed a run of success at the Glen Innes sale over the past few years, achieving the top sale price three years in a row.

This success is no accident, with the Battalion bulls offered at the Glen Innes sale carefully selected based on a combination of EBVs, structural type, pedigree and raw data.

“It’s a group package thing, you can’t just bring a bull here that might be terrific to look at but lacking in EBVs or raw data and expect to get good money,” Mr Kneipp said.

This year five out of five Battalion bulls sold at the sale, averaging $11,200.

Second top price at this year’s Glen Innes sale was paid for lot 11, Cara Park Unique M647 (H), which was purchased for $16,000 by Battalion Herefords.

“We purchased this bull due to his similar genetics to the sire of Undertaker,” Mr Kneipp said.

Cara Park Unique M647 is a son of the great carcase sire, Mawarra Unique C041 (AI) (H) and half brother to the sire of Battalion Undertaker (ET) (H).

“The bulls were very good right through, a lot of good bulls went through without being sold,’’ Mr Newman said.

“I’ve been selling here for about 43 years, but it’s just one of those years I suppose. It’s been pretty tough here.”

Purchased by Bluey Commins of Nunniong Herefords in Ensay Victoria, Monster weighed in at 865kg and placed third in the Junior class on show day.

Angus and Eunice Vivers of Jindalee Herefords, Inverell purchased Murrumbo, which was named as the Yardsmen’s Pick on show day.

“He’s got all the right figures and we thought he had a beautiful eye set.”

The top priced female was Dundee Constance 60 (P), a two-year-old heifer which sold to Sherwood Hereford Stud in Wauchope.

Ben Rumbel of Supple Whiteface considered the line-up of bulls offered at the sale to be of high quality, especially considering the seasonal conditions.

“The overall quality this year was excellent, its a credit to the vendors to put [cattle] up in that condition in a year like this.” Mr Rumbel said.

Elders auctioneer Brian Kennedy also reflected on the quality of the animals on offer and identified the market on sale day as having been patchy due to the season.

“The quality was more even than it has been in the past,

“The market was patchy but that’s to do with the weather.” Mr Kennedy said. 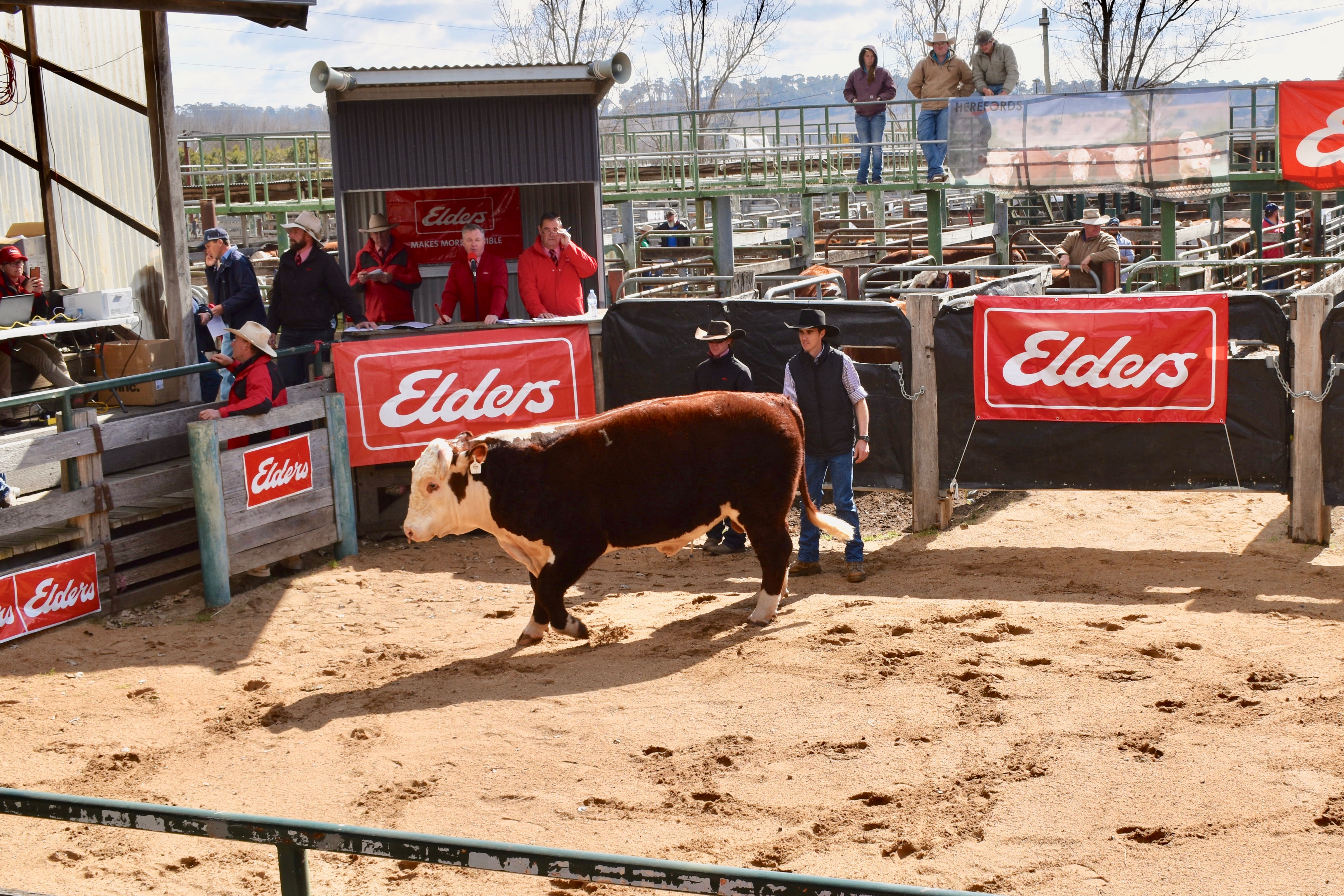 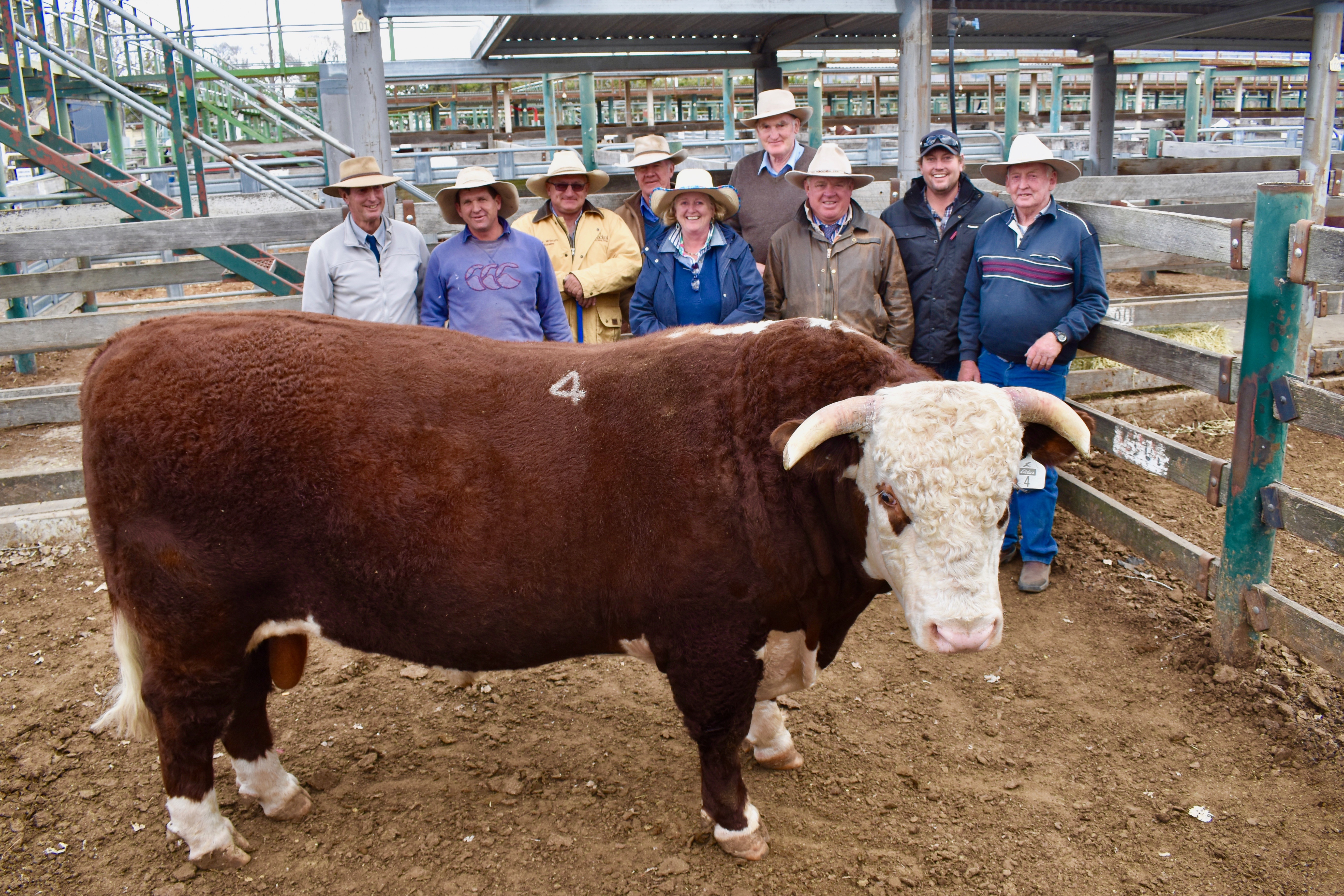 Yardsmen’s Pick: Kylandee Murrumbo (H) was sold to Angus and Eunice Vivers of Jindalee Herefords for $12,000. 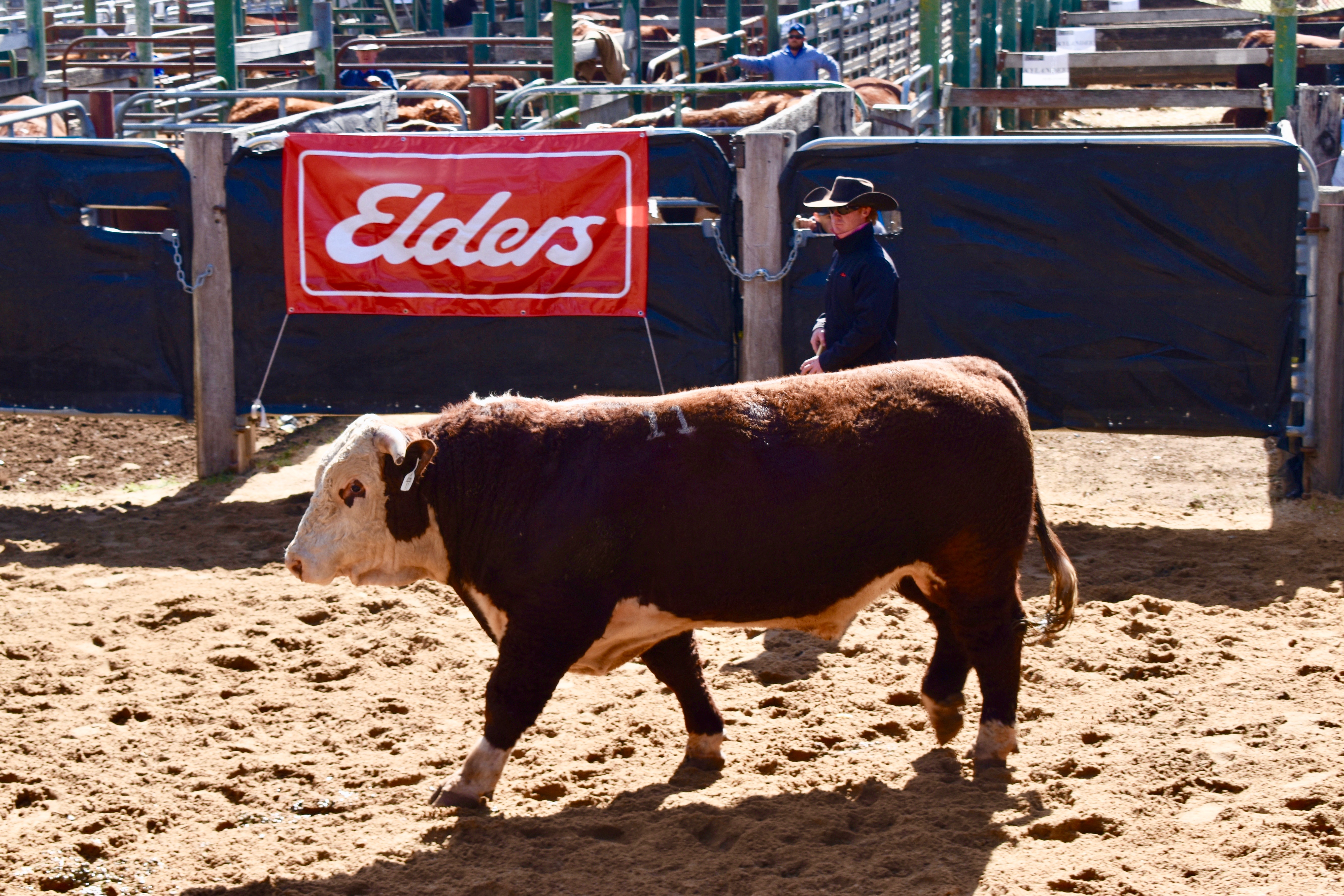 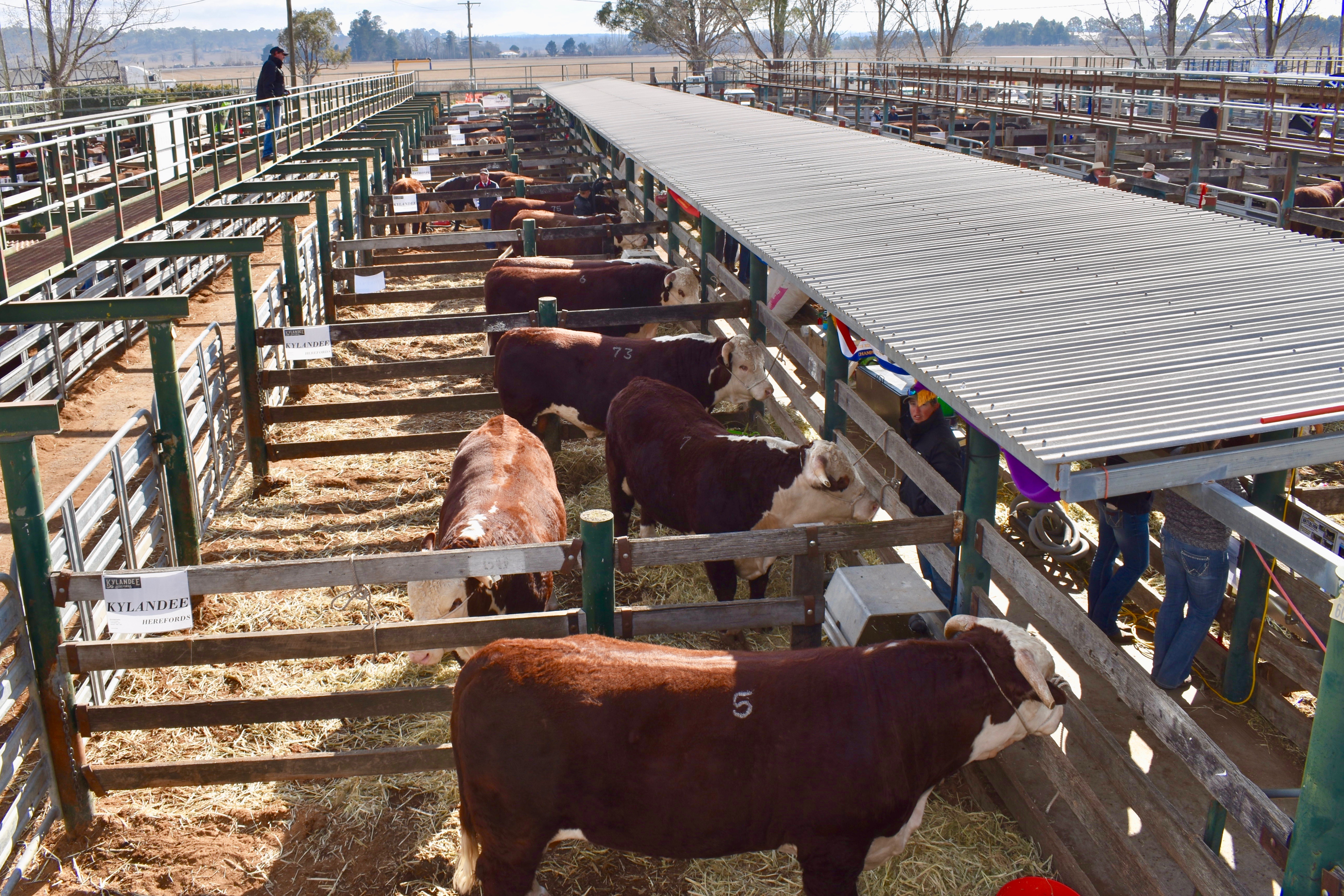 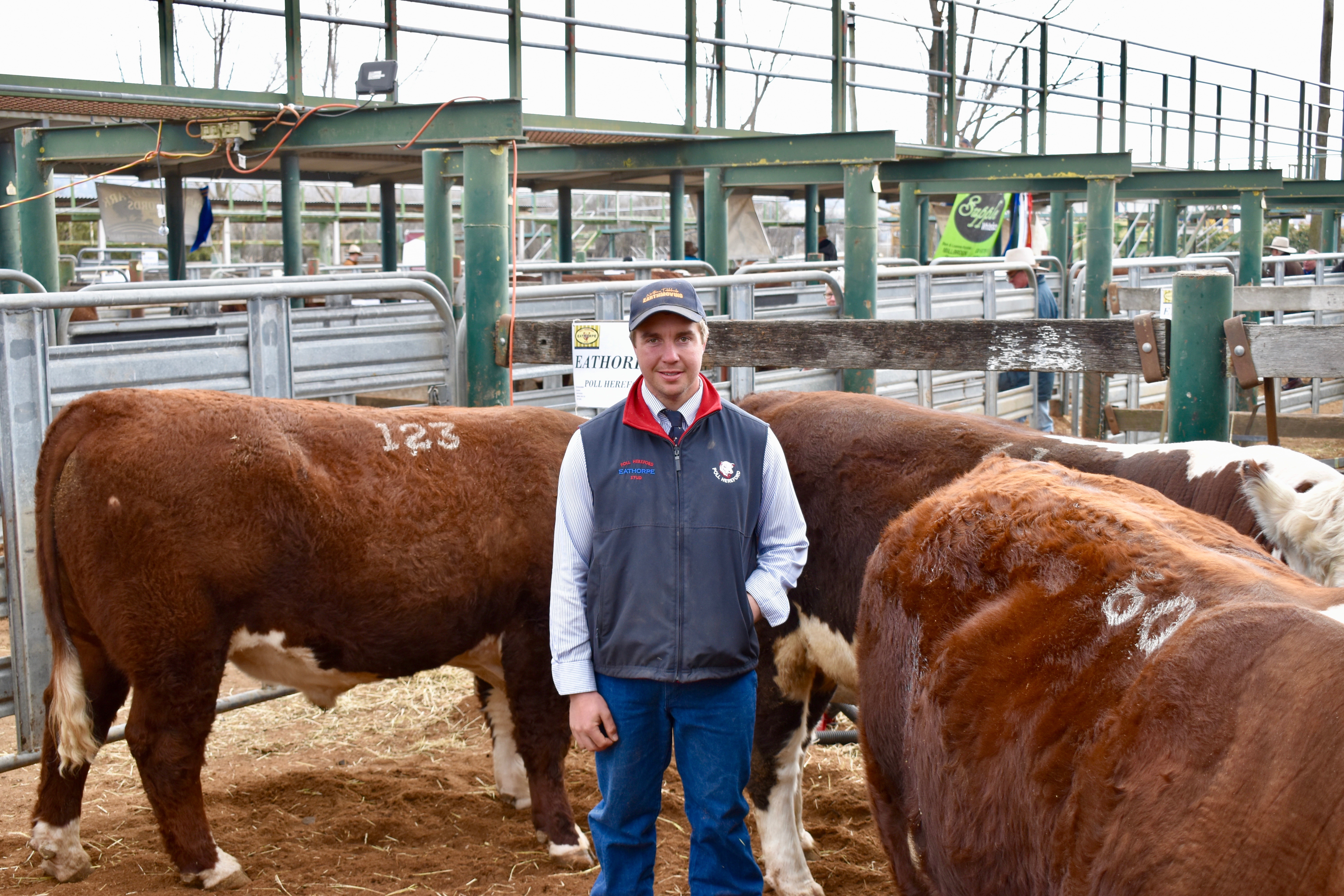 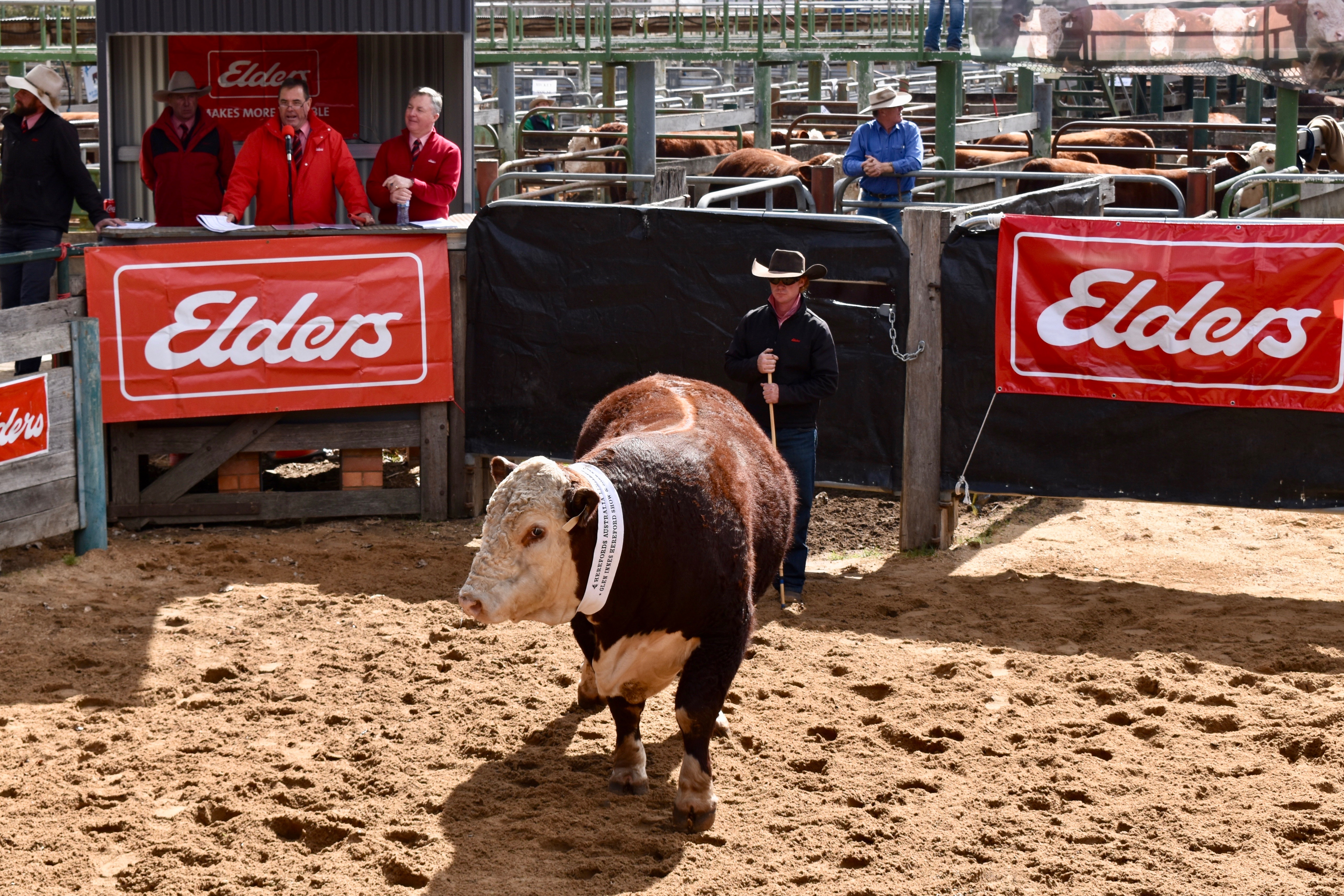 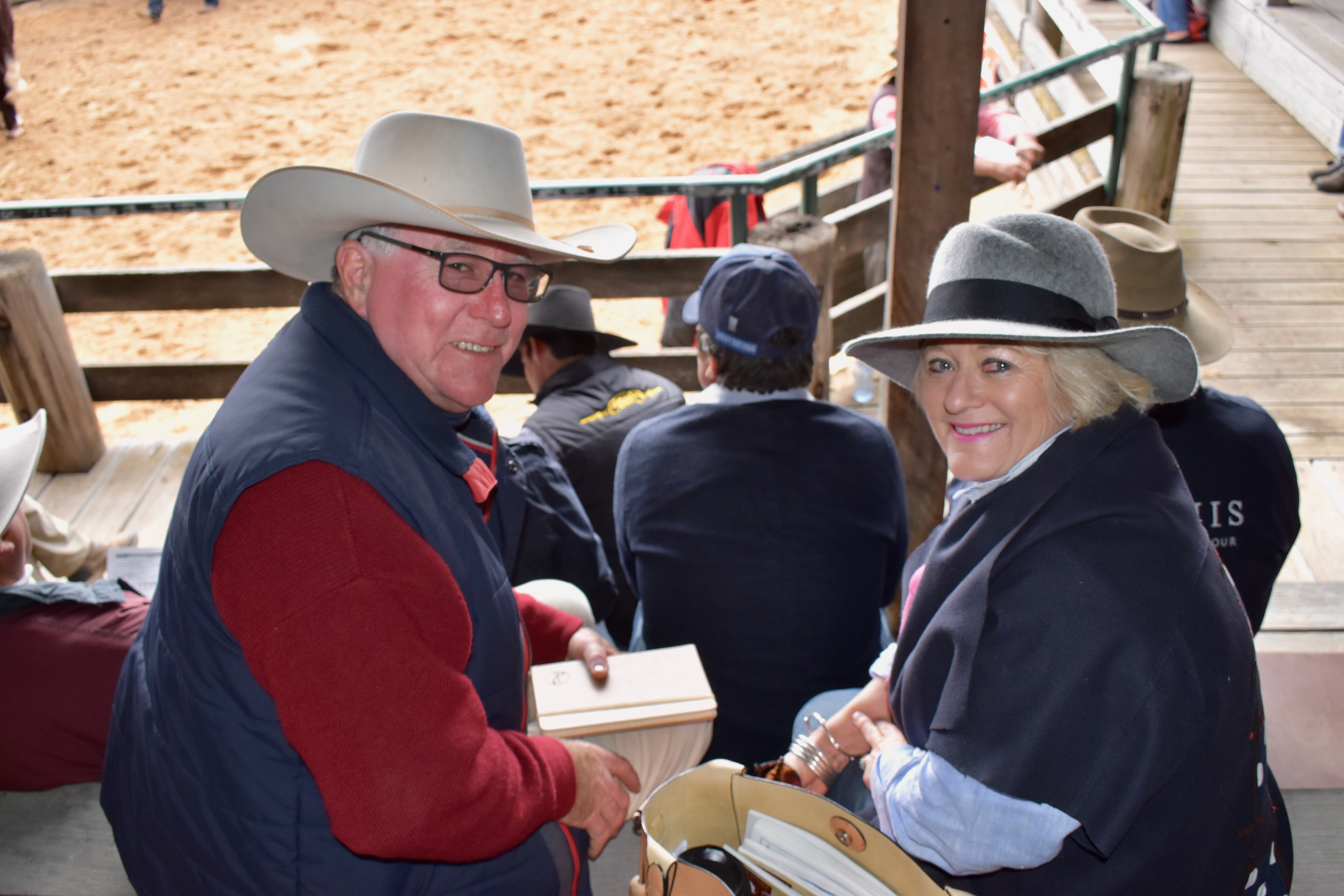 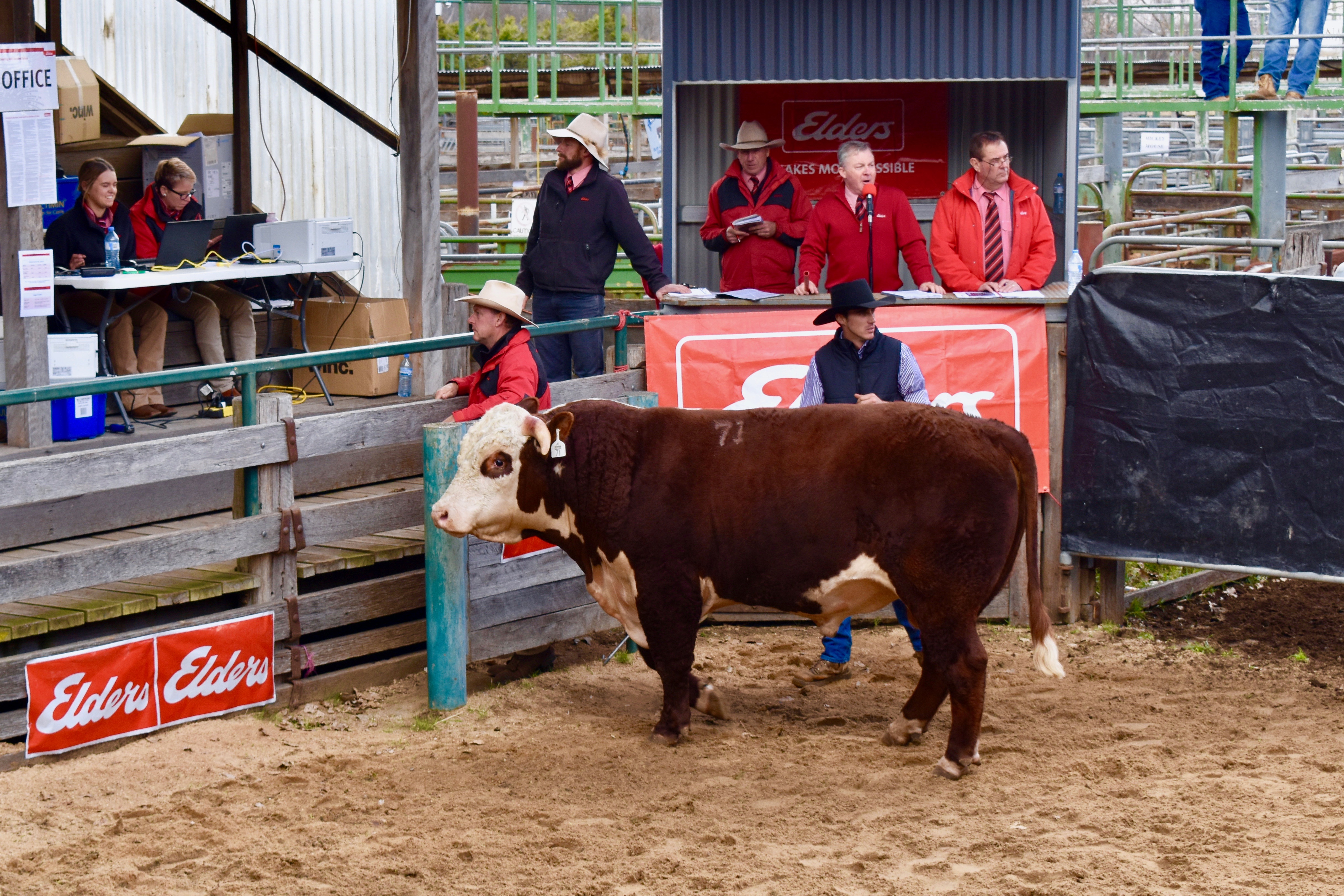 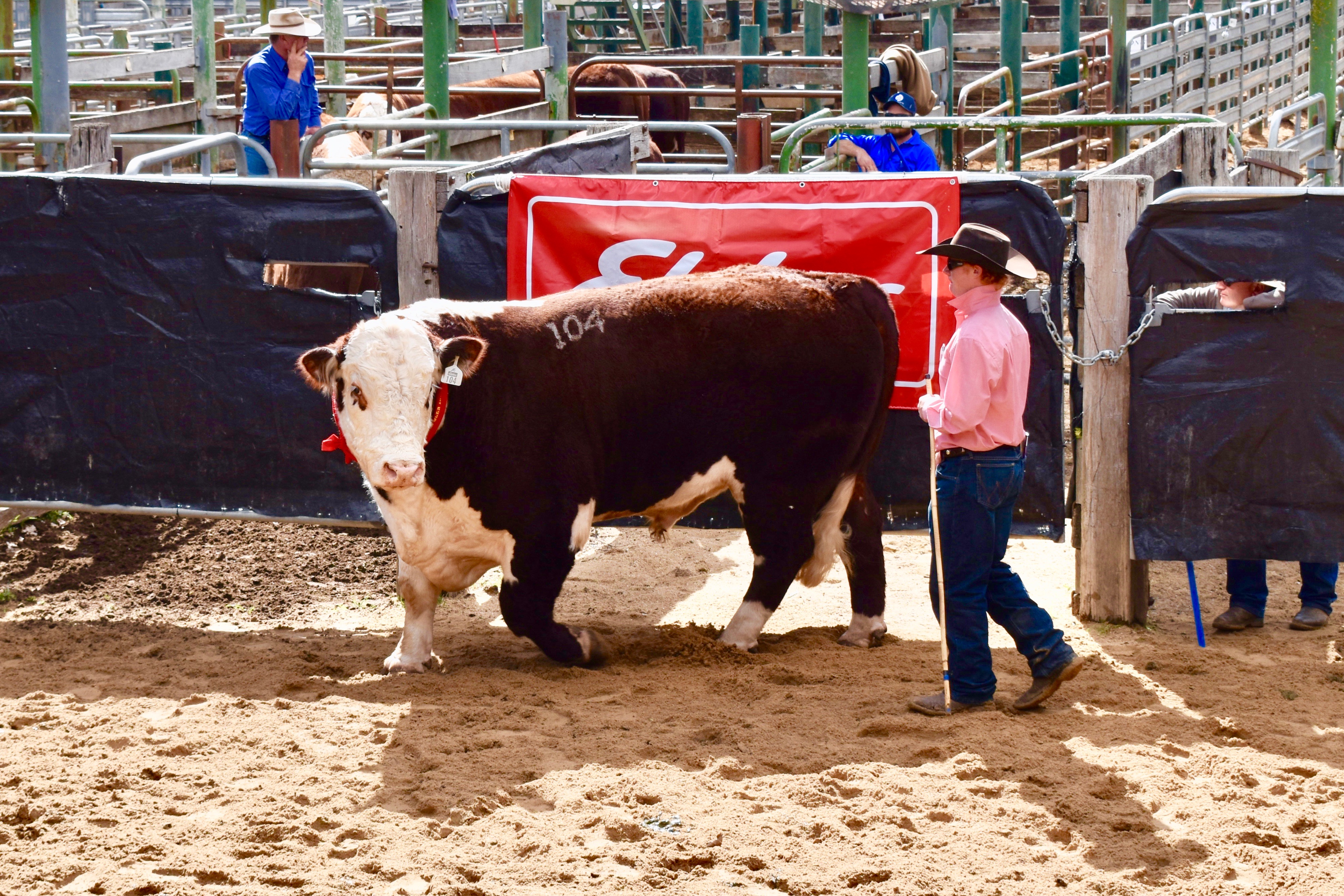 Bahreenah Magnum (S) was purchased by the Seawright family from Yuleba in Queensland for $11,000. 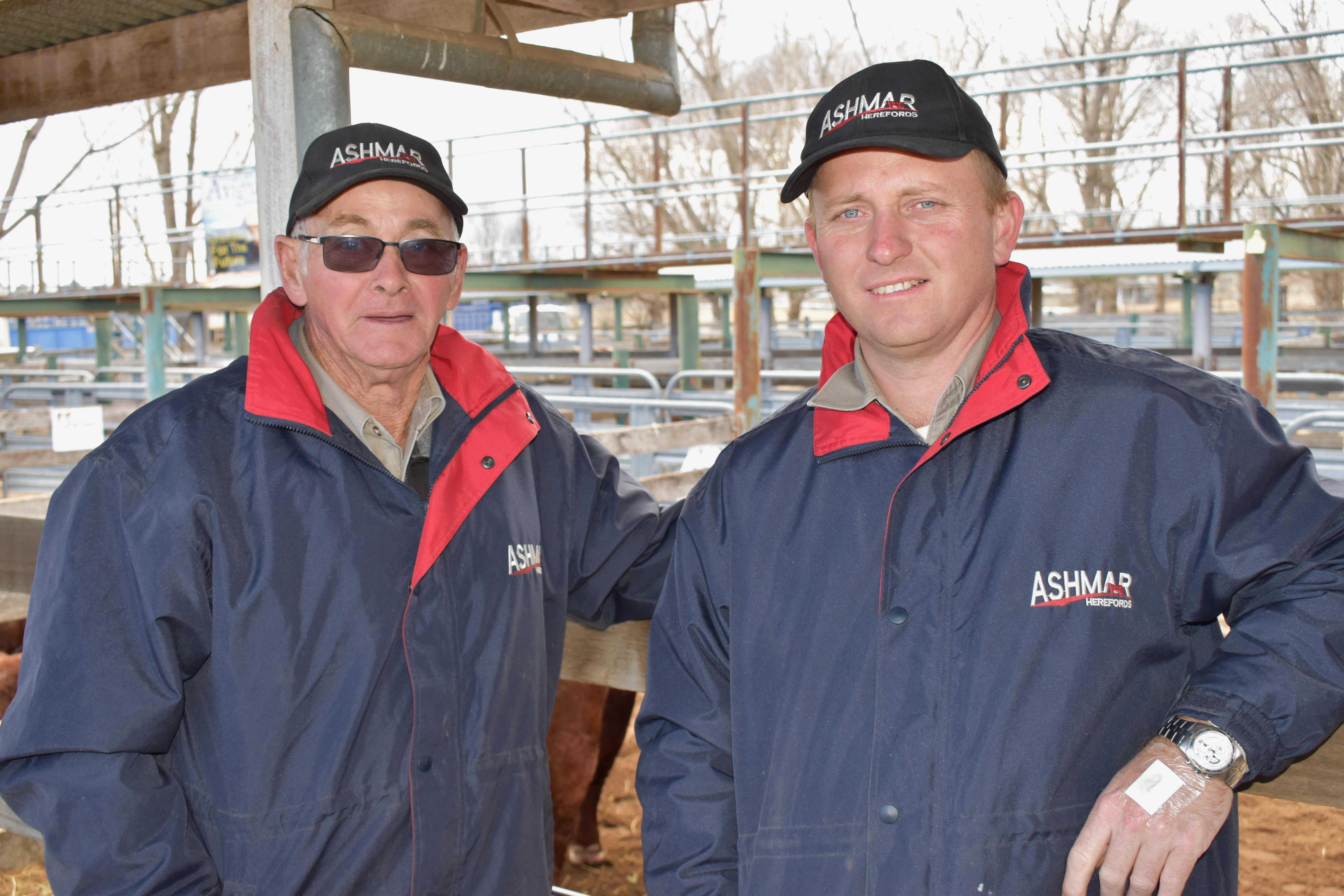 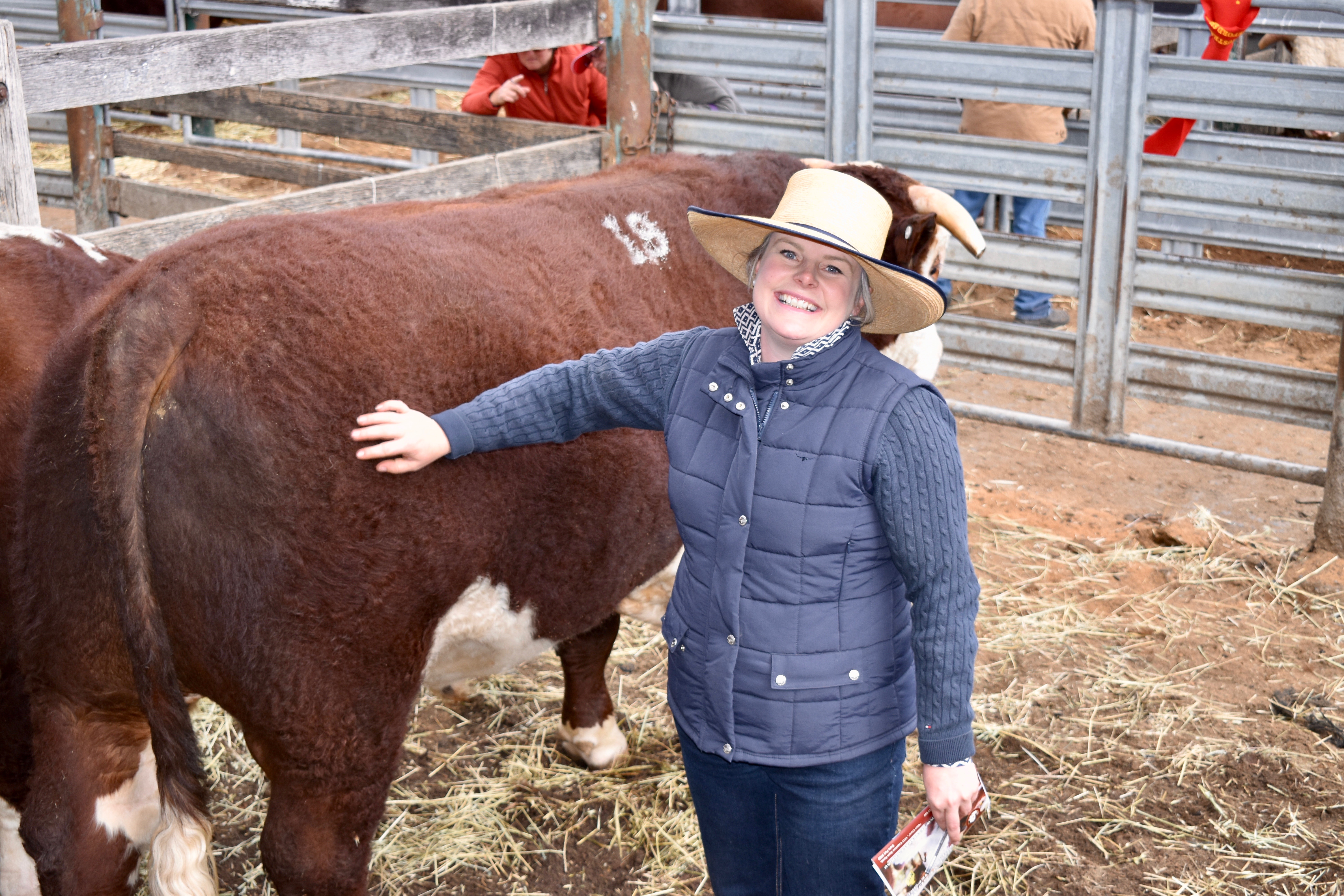 Anne Starr of Foxforth Herefords, Guyra with Foxforth Mountbatton (H) which sold for $7500 to Robert Drew of Kentucky. 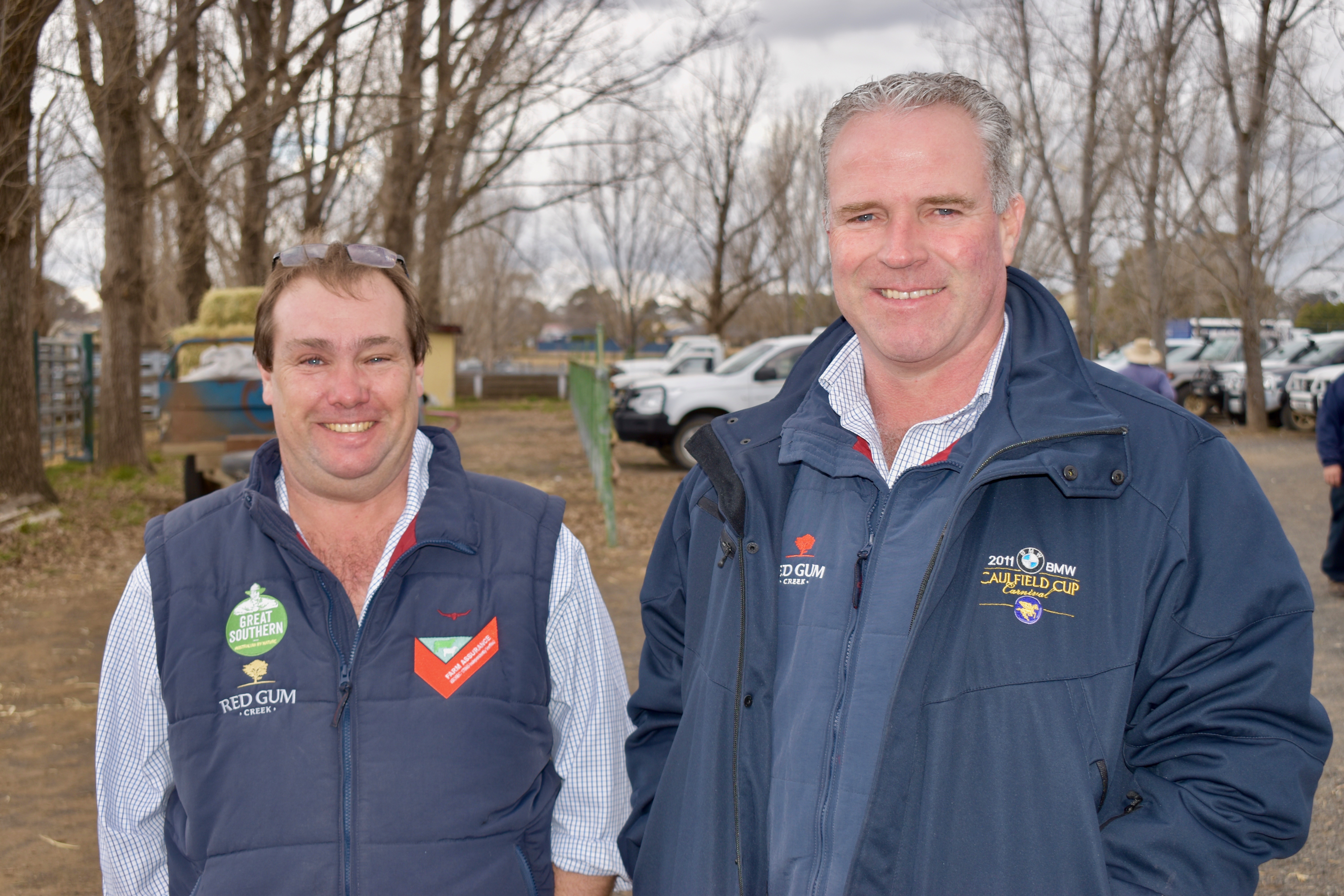 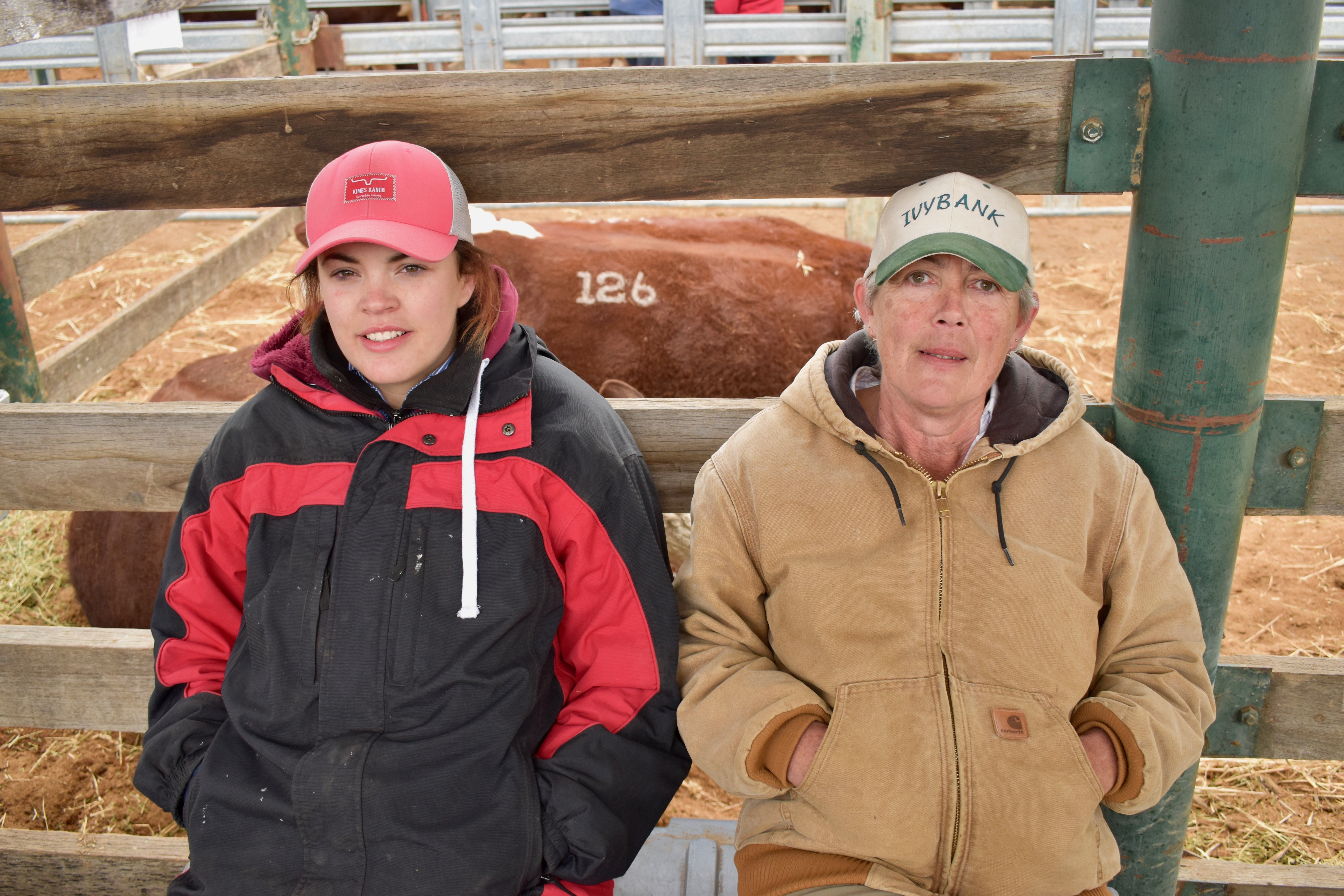 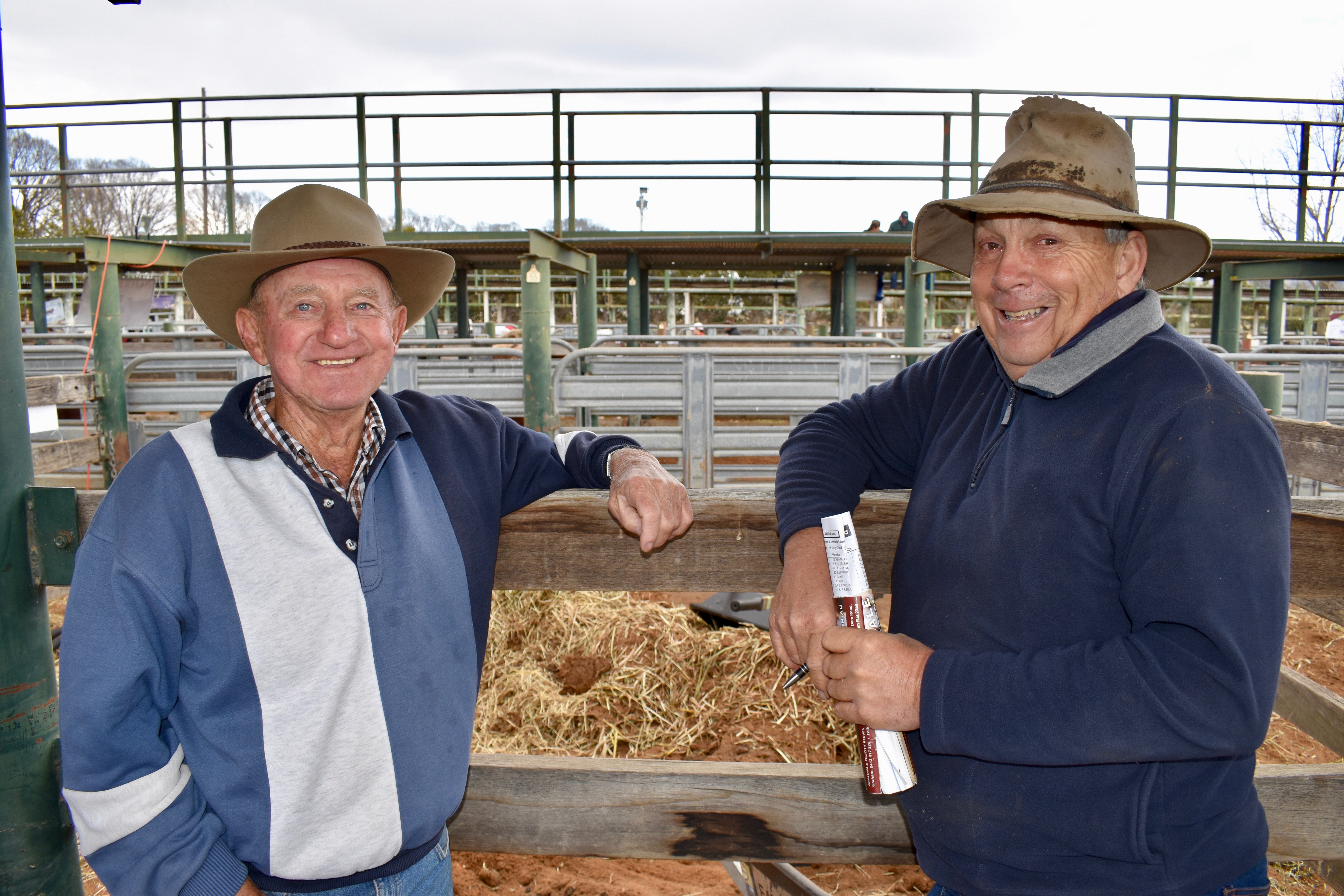 Bob Eimer of “Tanderra Park”, and Barry Anderson of Matheson browse the bull pens prior to the sale. 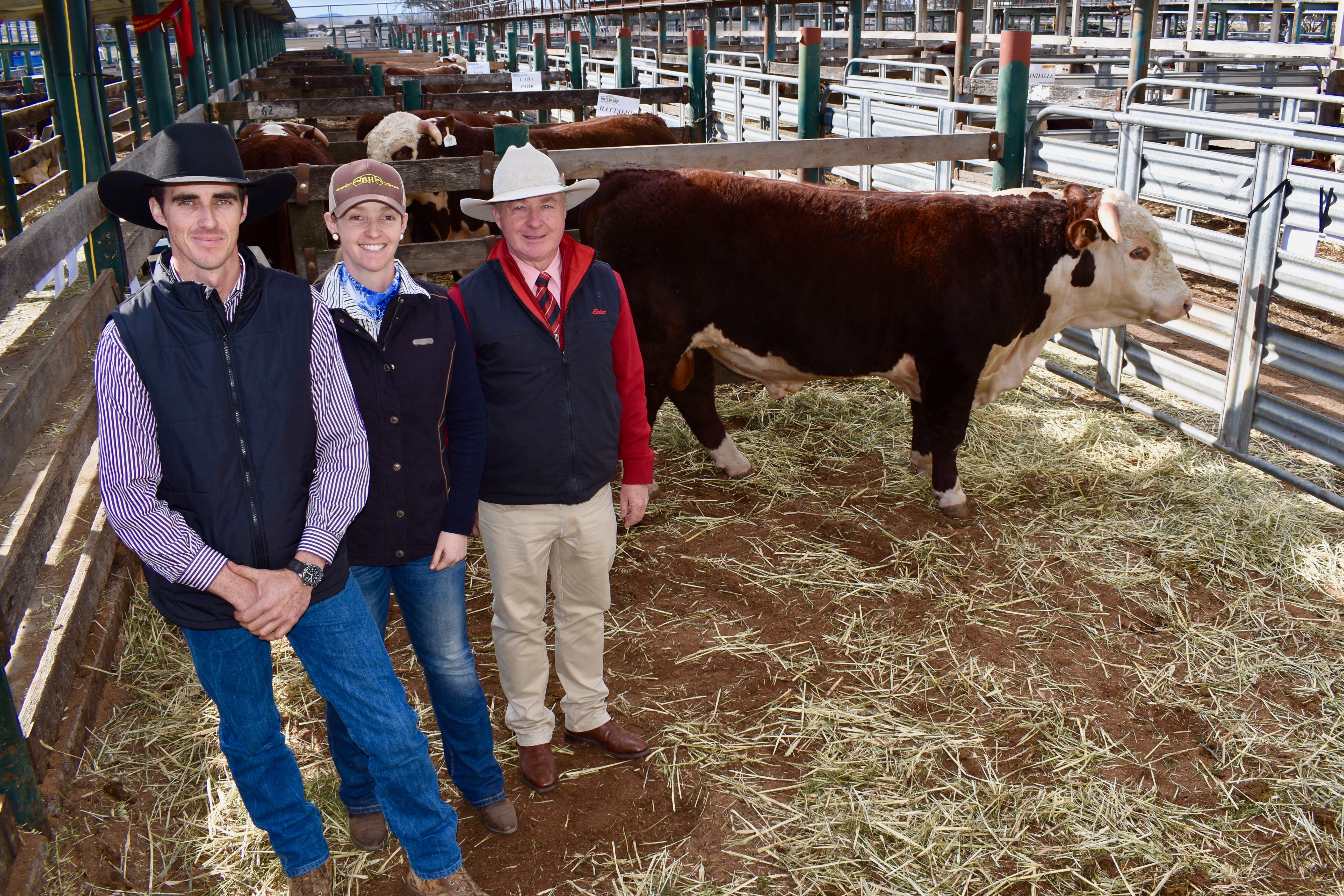 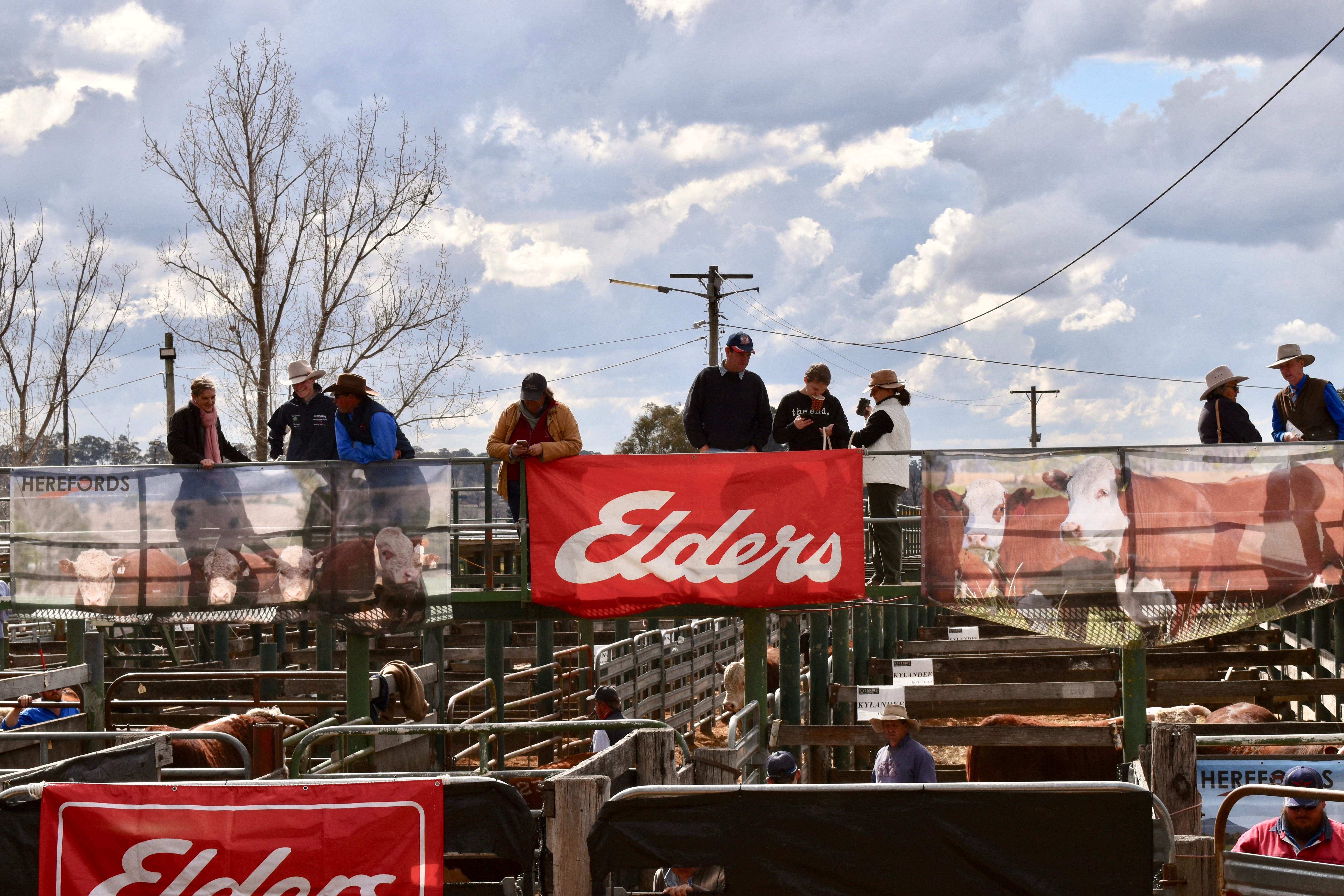 Sale spectators observe from the catwalks of the Glen Innes sale yards.