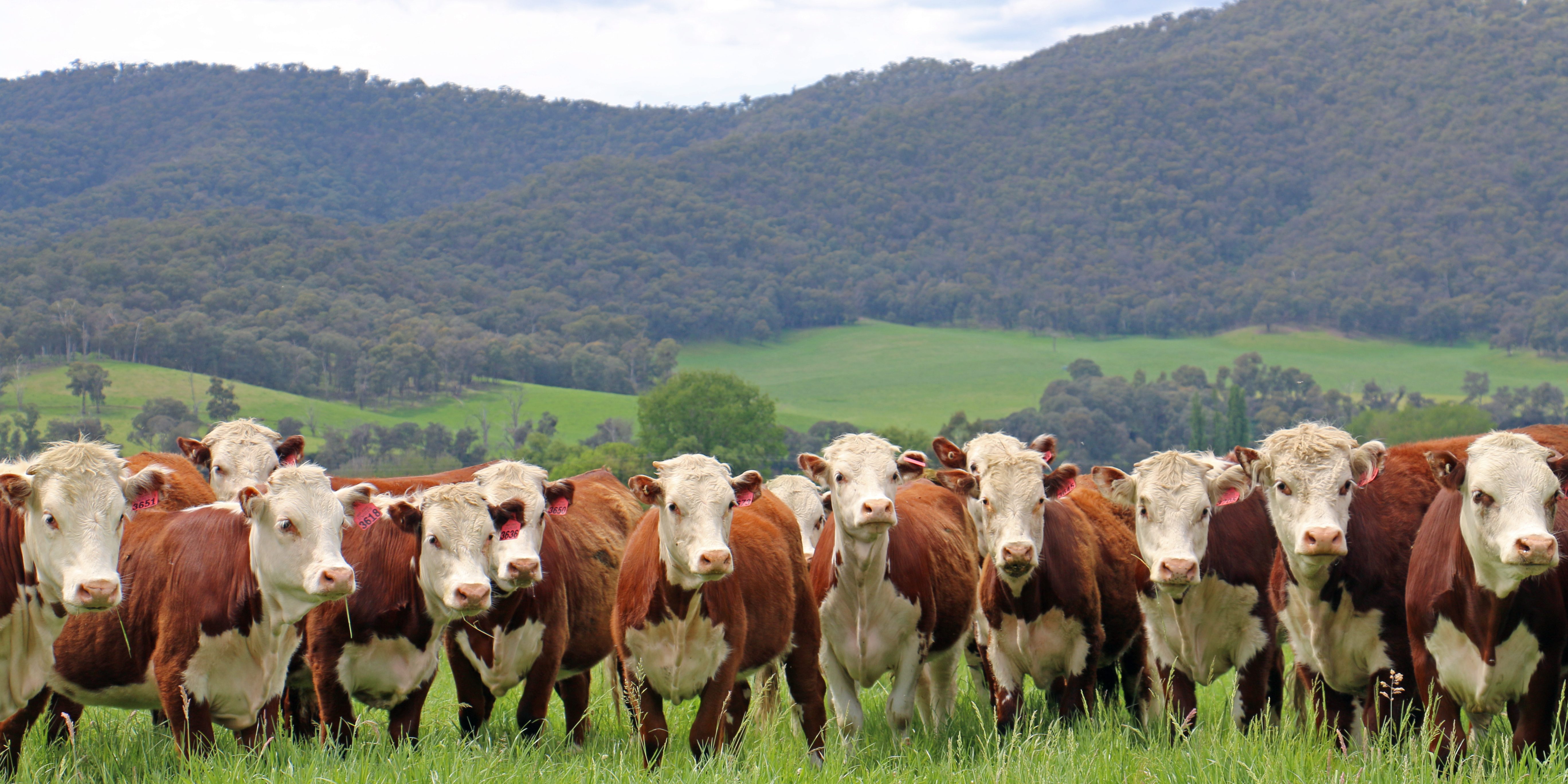 A leap of faith by a small group of Hereford producers in Victoria’s pristine Mitta Valley has turned into a vibrant and expanding grass fed beef brand.

Mitta Valley Beef began in a small way in April at five carcases a week and has since been formalized as a producer-owned co-operative supplying a dozen carcases a week to regional retail and food service sector outlets.

The brand will be co-ordinated by Mitta Valley Beef Co-operative, and officially launched on Sunday, February 4 at 3pm at the Dartmouth Hotel.

The brand idea has been a paddock to plate family concern for Hereford breeders John and Robyn Scales, their children Aaron, Ebony and Faith, and son-in-law Tim Glass, all of Dartmouth.

It has since been embraced by whiteface producers from the headwaters of the Mitta River down to Tallangatta and Lake Hume.

Mitta Valley Beef boasts 20 potential suppliers, with herds ranging from 100 to 600 cows, and the majority being Hereford.

The brand capitalises on the pristine, snow fed Dartmouth catchment, famous for its fishing, picturesque scenery and cultural heritage of grazing Hereford cattle.

John Scales conceded the idea of a regionally based beef brand occurred to him as a young man but the planets didn’t align until 2017.

Mitta Valley Beef was rolled out with corporate branding, a website and on-line sales in April, with cattle processed at Tallangatta and the carcases portioned by Beazley’s Meats, Wodonga.

A Mitta Valley Beef Co-operative steering committee was formed at a suppliers meeting in August.

“Producers don’t want to let go of this magnificent rapport they have with Hereford cattle and, if it means improving every year, so be it.’’

Mrs Scales said all suppliers were Landcare members and committed to managing their environment sustainably.

She said improved returns for cattle assisted farm succession planning in the valley.

The Scales family introduced the Hereford breed to the valley in the 1880s and today run 300 breeding females at Dartmouth, with weaners finished at Mitta North.

“We wouldn’t have anything else and we encourage other people to get into them too,’’ Mr Scales said.

“They sell themselves on temperament, quality and doability.

“Herefords work the bush incredibly well and do well on roughage.

“We sold heifers which should have been processed under the brand but we held them back to give other suppliers a go, and we struck a terrible market in Wodonga where they made $780.’’

The 14-month-old 400kg heifers would have made almost $1400 through the co-operative.

“The co-operative is a solid market for us with a guaranteed price and not open to the variables of the open auction system,’’ Mr Scales said.

“There is also the fact of community pride.’’

Traditionally the valley’s Hereford producers turn off weaners averaging 300-400kg into the January sales at Wodonga, while some finish steers and heifers on to heavier weights of 500kg for the supermarket trade.

Co-operative member Ebony Glass said cattle supplied under the brand could be supplemented with hay or silage but not grain, and must be HGP-free.

A consultant has been engaged to develop co-operative quality control procedures, finance and administration, and membership eligibility.

Individual producers and their herds are regularly profiled on the Facebook page, with plans to do short videos.

“We didn’t want to overload ourselves and needed to guarantee the supply coming through first,’’ he said.

Aaron uses texture, meat and fat colour to ensure the quality of the cuts before cooking.

Dedicated table talkers are used on tables at the Dartmouth Hotel to showcase the story of Mitta Valley Beef to diners, and a range of merchandise has been produced.

“Consumers want to know the provenance of their beef,’’ Aaron said.

Aaron said consumer demand for beef had increased three fold at the Dartmouth Hotel alone since the brand launch.

“It’s the pristine environment, the guaranteed rainfall and the valley is renowned as being one of the best beef producing areas,’’ he said.

Aaron advised any producers interested in starting their own co-operative to work out the GST requirements up front, draw on the strengths and skills of individual members, use their networks, and take a leap of faith. Mitta Valley Beef is a paddock to plate experience for Hereford breeders Ebony Glass and son Dusty, with John, Robyn and Aaron Scales. Ebony Glass with her family’s herd of cows and spring drop calves at Dartmouth. Weaners being rotationally grazed against a backdrop of the Great Dividing Range. Ebony Glass with 12-month-old weaners being finished for the Mitta Valley Beef brand.