Herefords Out To Prove Grainfed Suitability In Gate 2 Plate

Herefords are among the 59 teams competing in this year’s Harvey Beef Gate 2 Plate Challenge in Western Australia.

A team of two purebred steers and a heifer have been entered by Matthew and Felicity Della Gola, Tonebridge Grazing, Tonebridge, in the annual competition.

Competitors receive detailed feedback on individual and group animal performance at each stage of the supply chain throughout the competition.

Cattle must be owner bred and teams consist of two steers and a heifer.

They are grain fed at Willyung Farms before processing and MSA grading at Harvey Beef.

This year, the competition has drawn 57 breeds and crossbreeds.

Mr and Mrs Della Gola have entered a team of nine-month-old Yallaroo blood cattle, averaging 342kg (curfewed), with the heifers fed for 80 days and the steers for 90 days.

“We are not in it to win it as we have been lotfeeding for 20 years and grass finishing up to 5500 head a year, but we want to support our local competition as there is nothing like it in WA,’’ Mr Della Gola said.

“We want to encourage other commercial breeders to enter.

“We have entered the average of our mob as 95 per cent of what everyone sells is the average.

“We can then see how we sit outside of our operation and it gives us evidence of how our cattle perform when marketing our cattle to slaughter.’’

The couple run a herd of 2000 Hereford, Shorthorn and Angus cows in Western Australia’s south-west.

The breeding program is driven by firstly by cow fertility, with a focus on 200 and 400 day weights.

“We want a well muscled animal on a moderate frame and good early growth, as most animals go to slaughter before 15 months of age,’’ Mr Della Gola said.

“We have no luxury of spring or autumn green growth – our rainfall is 24-26 inches (600-650mm) between April and October, so we need good doing cattle.

“Under these conditions we are ending up with a multi-purpose animal as a replacement cow able to wean a calf for the feedlot or grass fed operation.’’

Mr Della Gola said the WA grassfed market was not as recognised as the eastern states under the Pasturefed Cattle Assurance System.

“The Hereford breed is well suited to that (grass finishing) and is also a complete package for producers losing the maternal traits in their herds,’’ he said.

“The temperament of Herefords is massively important to us as we are dealing with employees and family members – we can’t afford to have firey cattle.

“We only touch the calves twice a year so they need to be naturally quiet.’’

Progeny is mainly sold to a Hyden regional feedlot with cattle from the program supplying the domestic trade and the feedlot’s own brand targeted at the restaurant trade.

Mr and Mrs Della Gola yard wean their Hereford calves for 10-12 days on hay and with intensive yard education and pre-vaccinate with Bovilis to control respiratory disease.

The three breeds are run as separate purebred herds, with 150 commercial breeders in the Hereford herd.

The family has turned off 120 calves a week since November at 370kg to the feedlot, with no breed premiums paid, for a 80-90 day feeding program targeted at the domestic supermarket trade.

Mr Francis said Hereford steers had generally sold for 350-360c/kg and rising to a top price of 400c/kg for a 300kg pen at the Boyanup sale.

“The restocker and feeder competition was stronger on the heifers than the steers in both dollars per head and cents per kilogram, with a drift to purebred females,’’ he said.

Registered bulls sales in WA open on February 16 with 20 whiteface lots on offer from the Yallaroo, House and Greenland studs at the WA Supreme Bull Sale, Brunswick showgrounds, at 12pm.

Following on will be the Poll Hereford bull offering at the Invitation Multi-Breed bull sale at Narrogin on February 21. 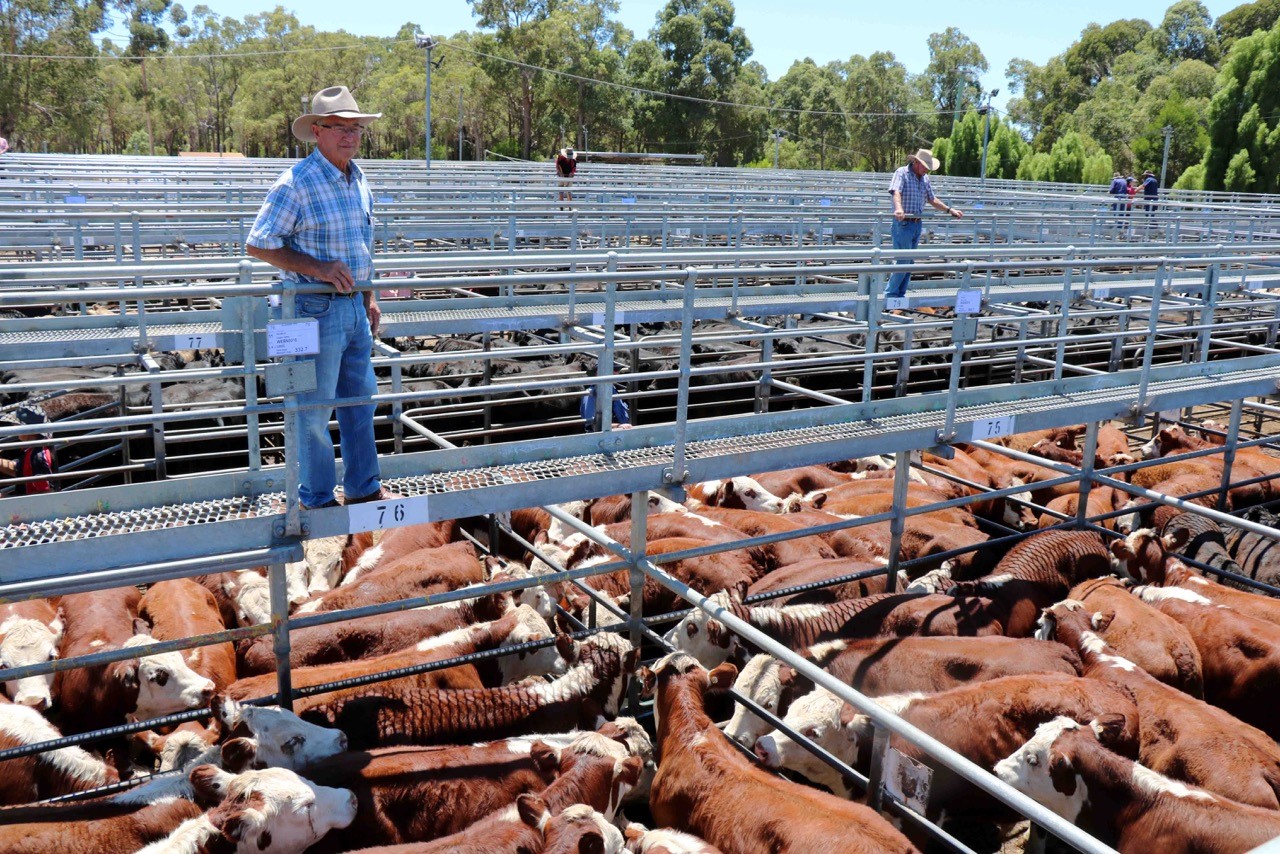