A Trans-Tasman cow productivity project is set to deliver Hereford producers the tools to lift fertility and profitability in their females.

It encompasses about 20 Hereford and Angus cowherds in Australia and New Zealand, and draws on data already generated by the Beef Information Nucleus herds.

“We have pooled resources with New Zealand funding and scientists combining with the Meat & Livestock Donor Company,’’ Prof Pitchford said.

“We are working with a group of leading Hereford and Angus breeders to identify and address gaps existing within the research.

“There are gaps around how best to describe cows, for example, two cows could weigh the same but be quite different in body composition.

“We are also looking at selecting for fertility in younger animals and we have an issue where the best data recorders in the industry are using a lot of artificial insemination.’’

With the synchronisation used in AI programs masking the variation in fertility, the project will study alternative means of fertility data collection. These include measuring the age of puberty in heifers and using genomic testing on animals with a history of fertility data.

Project participant and Hereford breeder Ian Locke hosted Australian and New Zealand members of the project group on his Holbrook property, in southern NSW, this week.

Ian and his wife Diana retain at least 90 per cent of their heifers for mating and sell cows over eight years old.

Around 80 per cent of their calving females are aged four years and under to boost genetic gain and production efficiency, and reduce age related problems.

The couple has a disciplined approach based on “cow herd hurdles’’ – females are culled on fertility with no exceptions or favourites, and there is a focus on easy calving and non-intervention.

All females are joined from November 1 for six weeks for a mid August calving, with heifers calving as two-year-olds and all calves early weaned at five months of age.

Mr Locke said the average performance recorded Hereford female had its first calf at 2.5 years of age, representing opportunities for the breed in Australia to lift fertility.

“I’m after cows that can ride the condition score roller coaster – the animals who can put haystacks on their backs in spring to get through the autumn and winter, calve and go through the cycle again,’’ he said.

“By culling any females without calving ease, and selecting for calving ease in the bulls, we were also driving gestation length down.

“Genetically, the mature cow weight of our herd is lighter than the breed average.’’

Mr Locke said genetic fat was a risk management tool for females during the tough seasons.

“I have accepted fat is part of running a low cost beef herd and we drive eye muscle area to ensure we have the carcase yield wanted in the market,’’ he said.

“Carcase has the most scope for improvement in the breed – that may be not in dollars per hectare but we can go a long way in carcase without downsizing the other traits.

“We keep driving muscle and as yet it has no effect on fertility.’’

“I’m under no illusion that in the end we are in the beef industry and its about eating quality,’’ Mr Locke said.

“The good thing about the Hereford breed is there is a wide variation in marbling, just the same as there was in Angus 15 years ago.

“It’s just about utilising the tools to keep driving it – there seems to be very few downsides to driving IMF.’’

“We need weight, hip height (frame) and condition score components to describe the type of cow,’’ he said.

Mr Locke has used both US and New Zealand sires to bolster his herd’s Trans Tasman genetic linkages to those Hereford populations.

“I could see a day coming where we would have Pan American and Trans Tasman analysis, and I want to be well linked to that,’’ he said.

“The Trans Tasman analysis makes it easy to select genetics – generally speaking, the New Zealanders are better than the Australians on structure, calving ease and gestation length.’’ 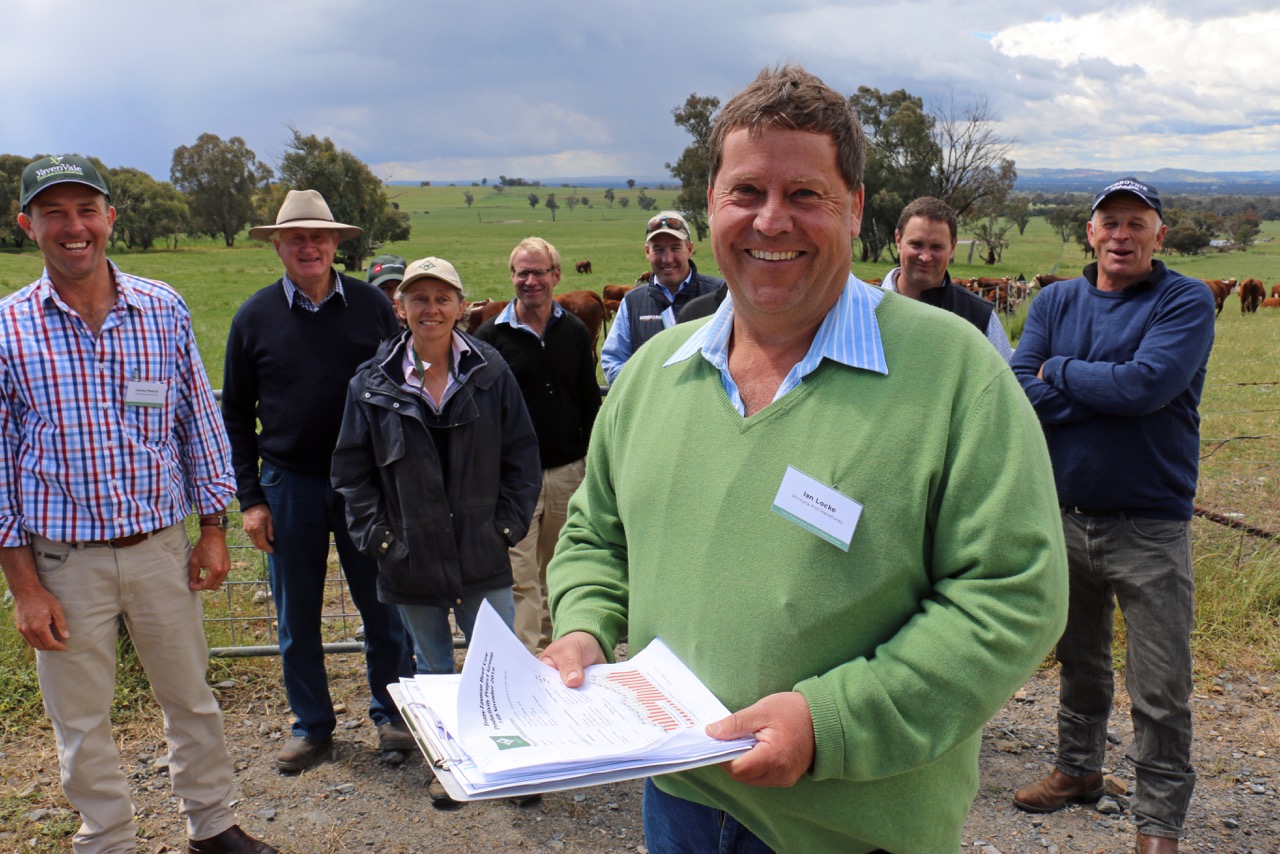 Ian Locke, front, has used objective data to boost the fertility of his whiteface herd to above
average. 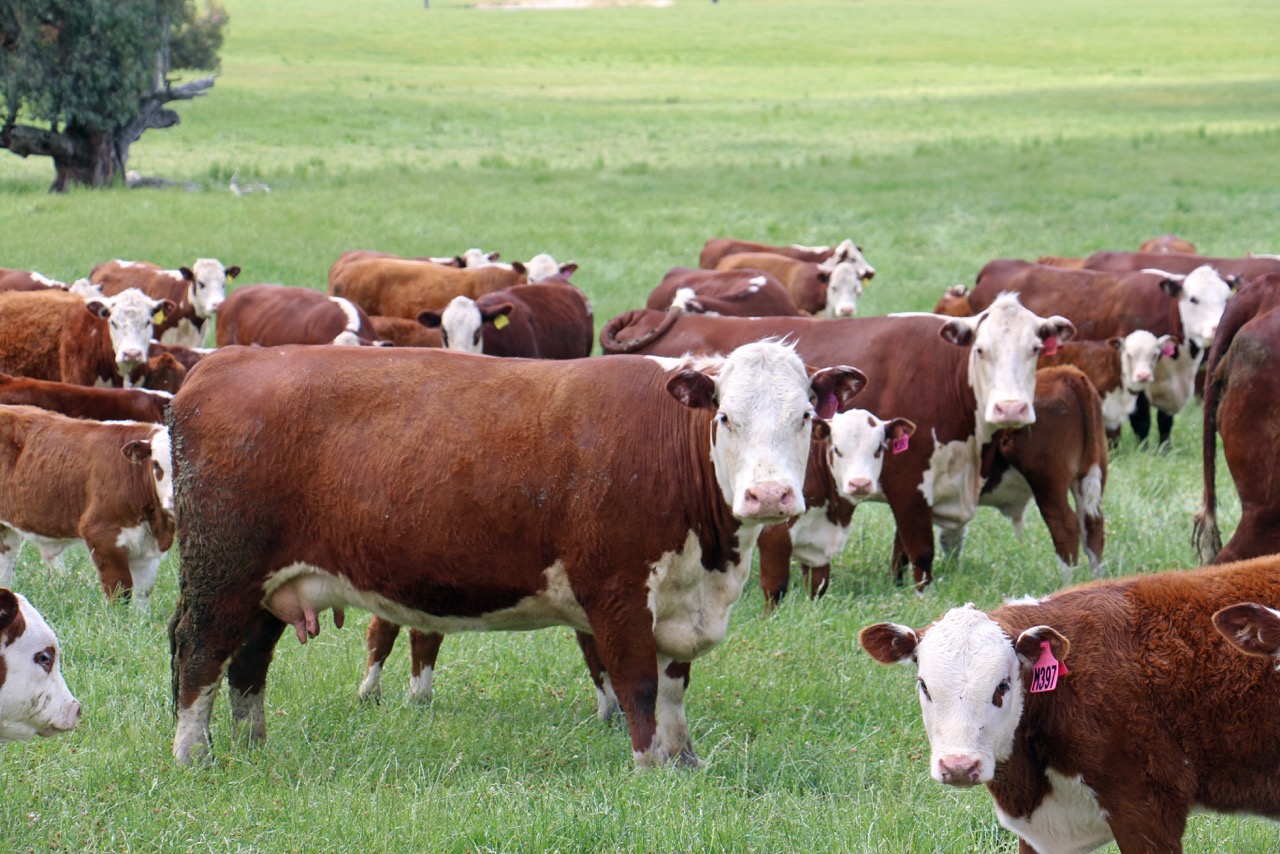 A disciplined approach is based on “cow herd hurdles’’ – females are culled on fertility
with no exceptions or favourites, and there is a focus on easy calving and
non-intervention.