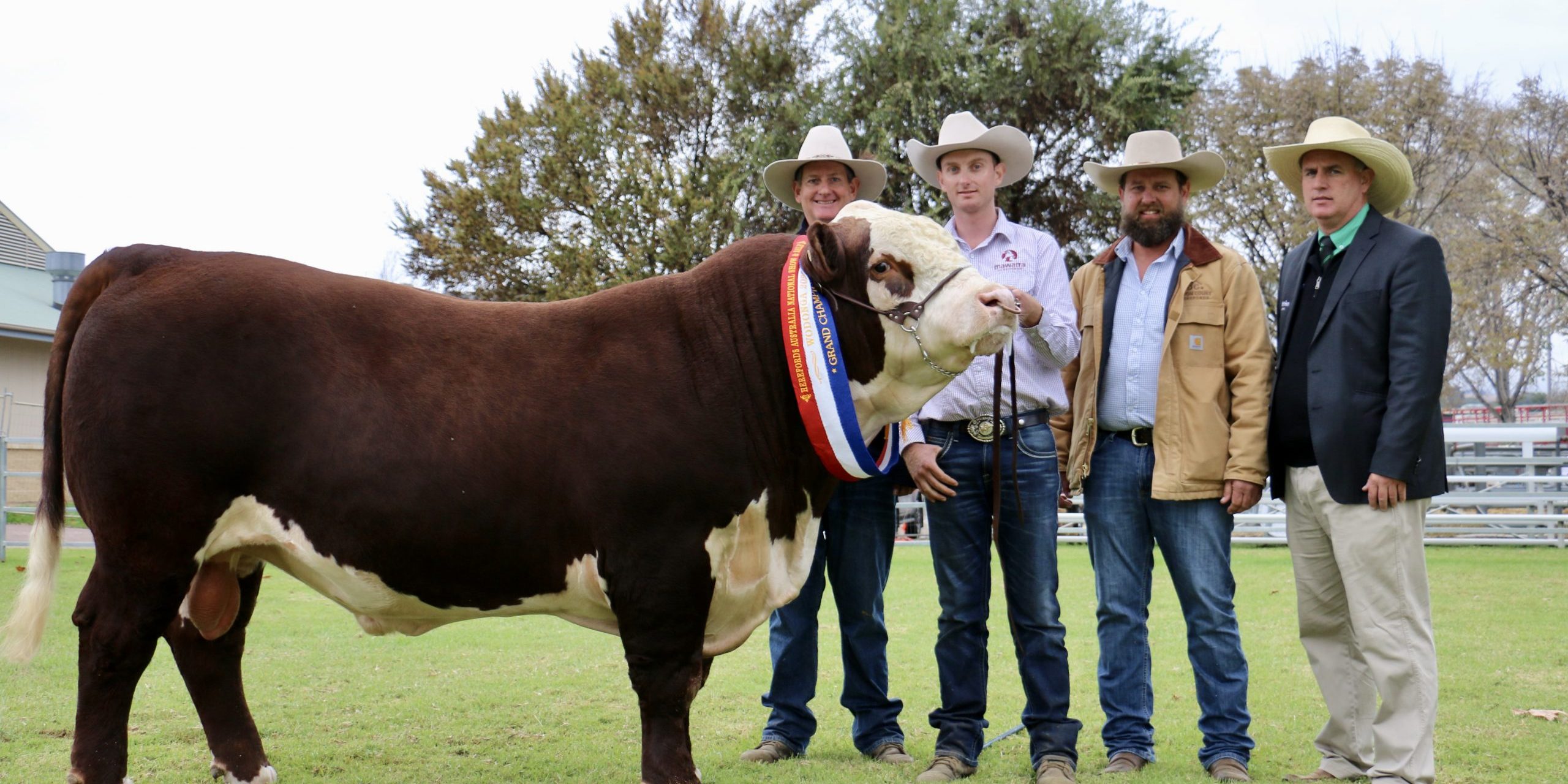 The Hereford breed stamped its dominance in the market posting a thumping top price of $130,000 and a new record average of $15,794 at the 57th Herefords Australia National Show and Sale.

Held on May 12 at Wodonga, the National Sale drew buyers from NSW, Victoria, Tasmania, and Queensland, and was interfaced with AuctionsPlus.

Billed as one of the largest multi-vendor sales in southern Australia, it catered for 34 vendors from four states.

The 24-month-old Mawarra Ultra Star R182 by US sire Endure 173D was sold by Peter and Deanne Sykes, Mawarra Genetics, Longford, Victoria, and had been sashed as the intermediate champion bull and then eventually grand champion by judge Steve Reid the day before.

He had a strategic plan to buy two full brothers and had earlier paid $35,000 for the top price bull at Mawarra’s on-property sale, Mawarra Ultimate R140, partnering with Cascade Poll Herefords, Currabubula, NSW.

“We will have a multi-sire joining to the stud cows this year to those two bulls, on top of an AI program using our new Canadian sire KJ Medium, which just sold for CAN$240,000 – we partnered with Otapawa for Australian semen rights,” Mr Nixon said.

“It was phenotype and pedigree first (with Ultra Star) – breed leading data sets with top one per cent most of the way through with moderate birthweight, calving ease, EMA (eye muscle area), fat and IMF (intramuscular fat).”

Vendors Peter and Deanne Sykes were overwhelmed and humbled by the result.

“The outlook for the breed is great with people willing to spend money on good genetics with the right traits,” Mr Sykes said.

“Our grass-fed markets are going well for Herefords and the cattle sold today certainly had those carcase traits and doing ability Herefords are known for.”

It was a day full of emotion for vendor Andrew Green, Yarrandabbie Herefords, Barfold, Vic, when his bull Yarrandabbie Richard R004, named in honour of his late father, Dick Green, sold for the second top price of $70,000 to Marc Greening, Injemira Genetics, Book Book, NSW.

The 23-month-old bull had been sashed as reserve intermediate champion and was sired by Glendan Park Panama P004.

On BREEDPLAN, the young sire had a birthweight of +5kg, milk of +22kg, carcase weight of +65kg and eye muscle area of +5.9sqcm.

Mr Campion said the bull ticked all the boxes a Hereford sire required.

“Overall, he was a beautifully balanced bull with good structure, a tonne of depth, good length and massive figures,” Mr Campion said.

“We have used Mawarra before and moving forward our mission would be to use him over Yarram Park and Newcomen females.

“As far as weaner prices go, everything is just brilliant with all our clients benefitting from that and the back-to-back seasons.

“It is really good for the rural sector after such a hammering during the drought years, and it looks like we might have three good seasons in a row.

“That puts confidence back into everything and that leads into this industry, and it is showing here today.

“This sale is totally underpinned by commercial and stud buyers.”

Phil “Bluey” Commins, Nunniong Herefords, Ensay, outlaid $38,000 for Hollow Point R024, a son of Yavenvale M446 and with an EBV of +108kg for 600-day weight, +24kg for milk and +66 for carcase weight. The bull was sold by Alex Townsend, Hollow Point Herefords, Tinderbox, Tasmania.

Mr Reardon was investing in genetics after selling 170 steers (top pen was 457kg) and 49 heifer weaners at Powranna for an overall average of $2175.

“I like good meaty cattle without being extreme. I like the Hereford’s temperament, growth, carcase, calving ease and doing ability,” he said.

“It was good to see the strong commercial support with repeat buyers and quite a few people bidding online.

“The social aspect is a big part of it – it’s a big few days on the Hereford calendar.

“Since COVID has come and gone people have really been looking forward to the event this year with a different level of optimism off the back of strong cattle prices and the season.”

“Off the back of the weaner sales through January and in the mountains in March, buyers were getting good money for their calves and were willing to invest in the genetics – it was a credit to the breeders what they are doing for their commercial clients,” Mr Godbolt said.

“With a new record top price for Wodonga – it was good to see the breeders getting rewarded for what they do, and the Hereford breed getting recognised within the industry.”

Mr Godbolt said online buyers bid on around half the catalogue. 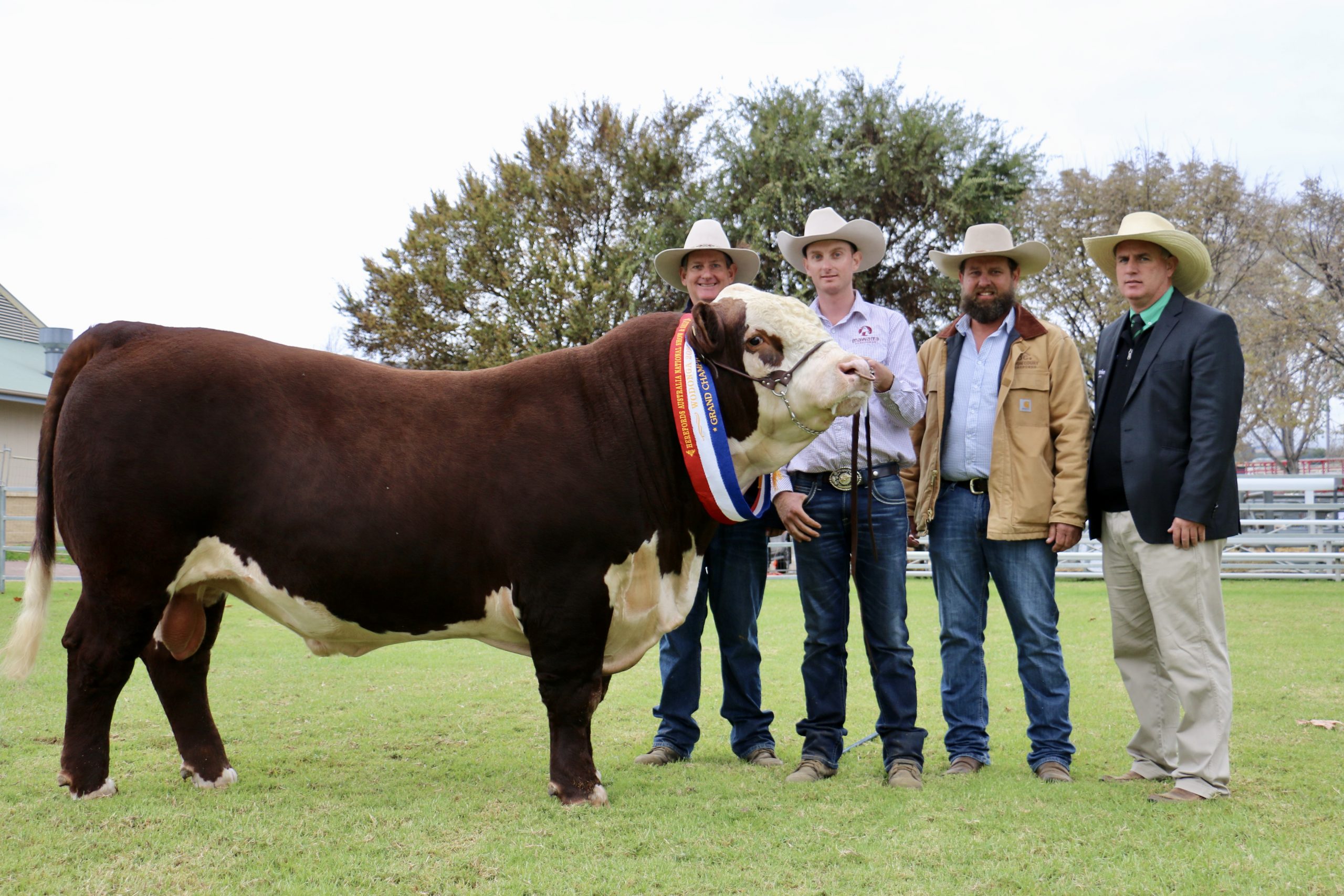 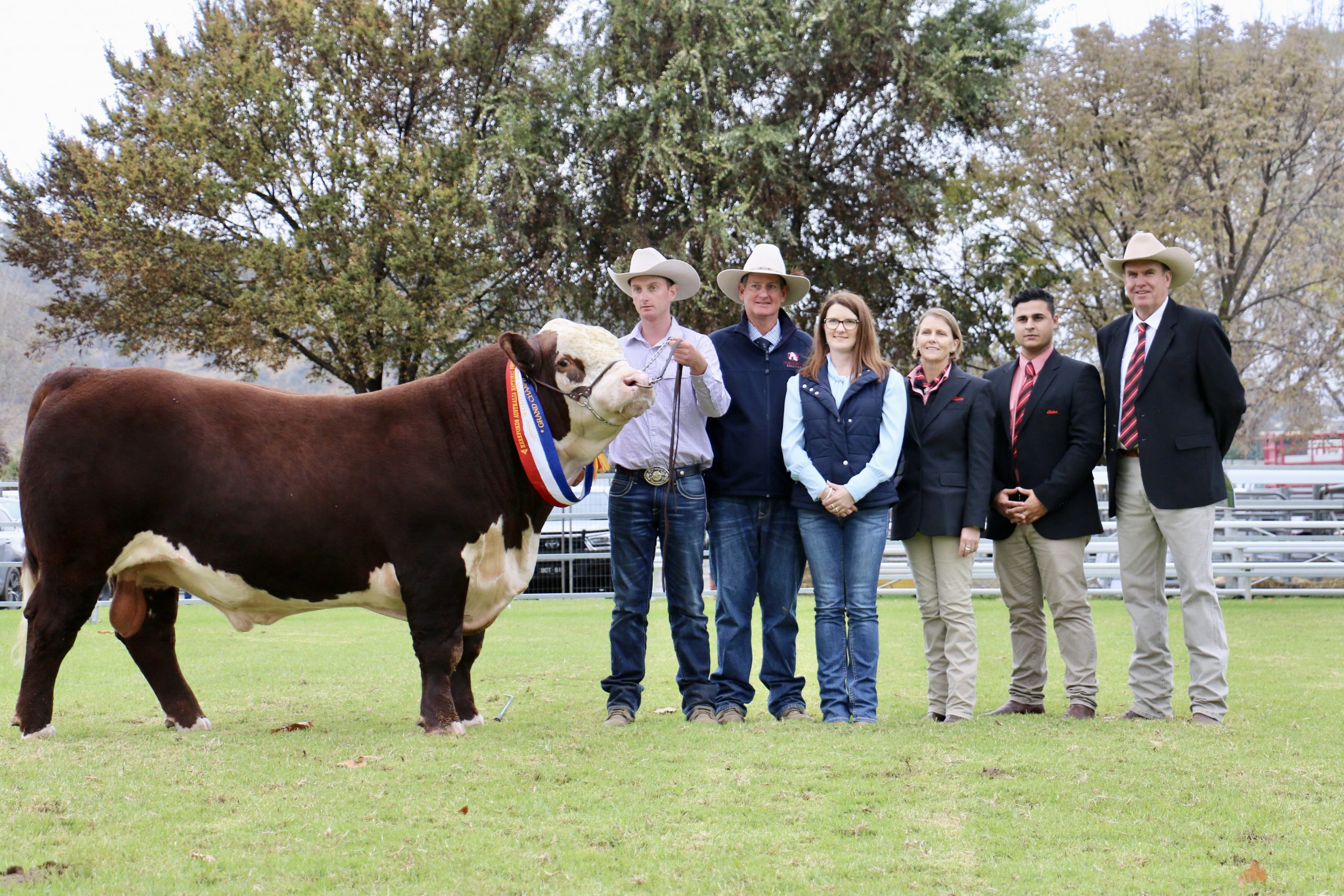 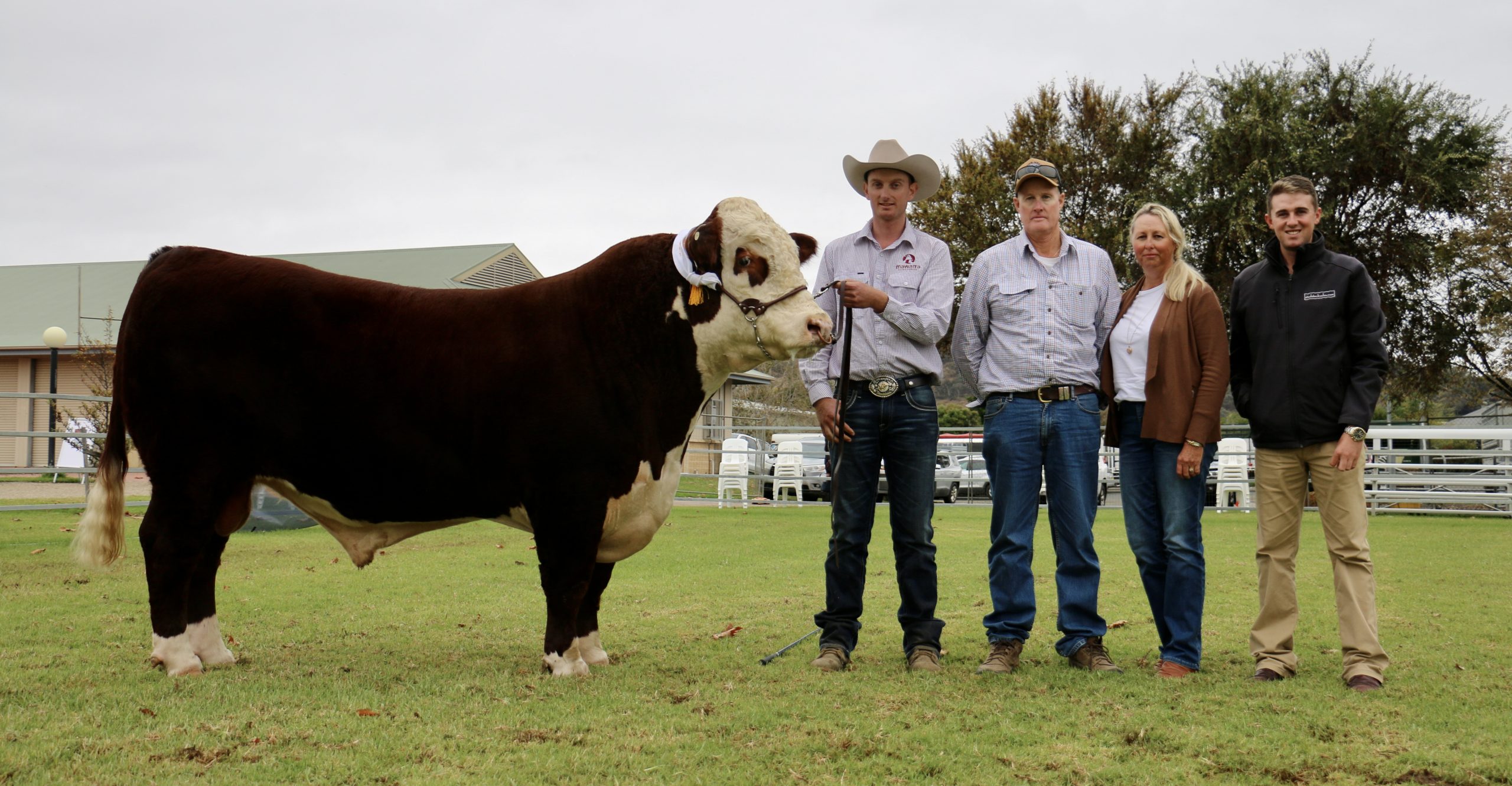 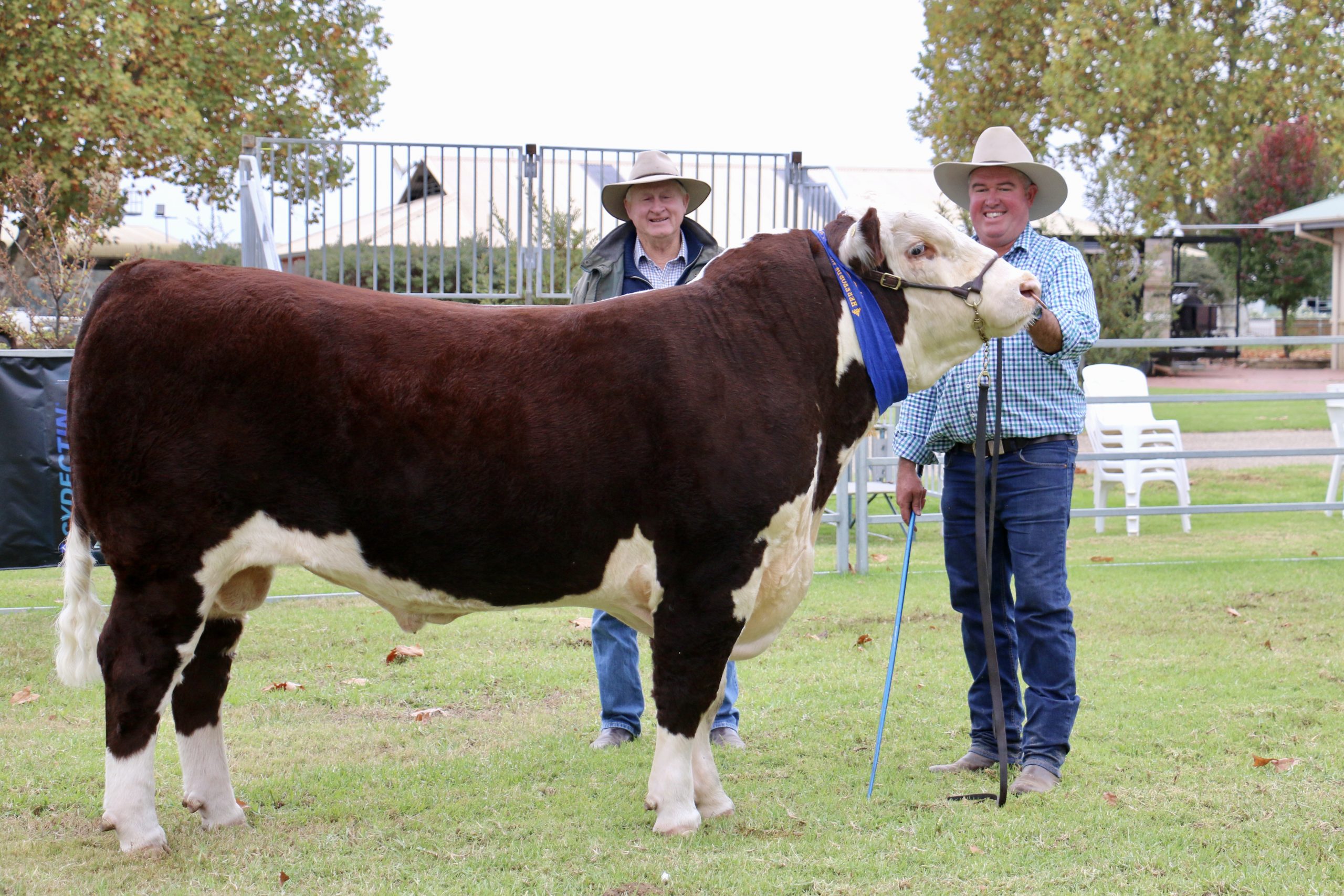 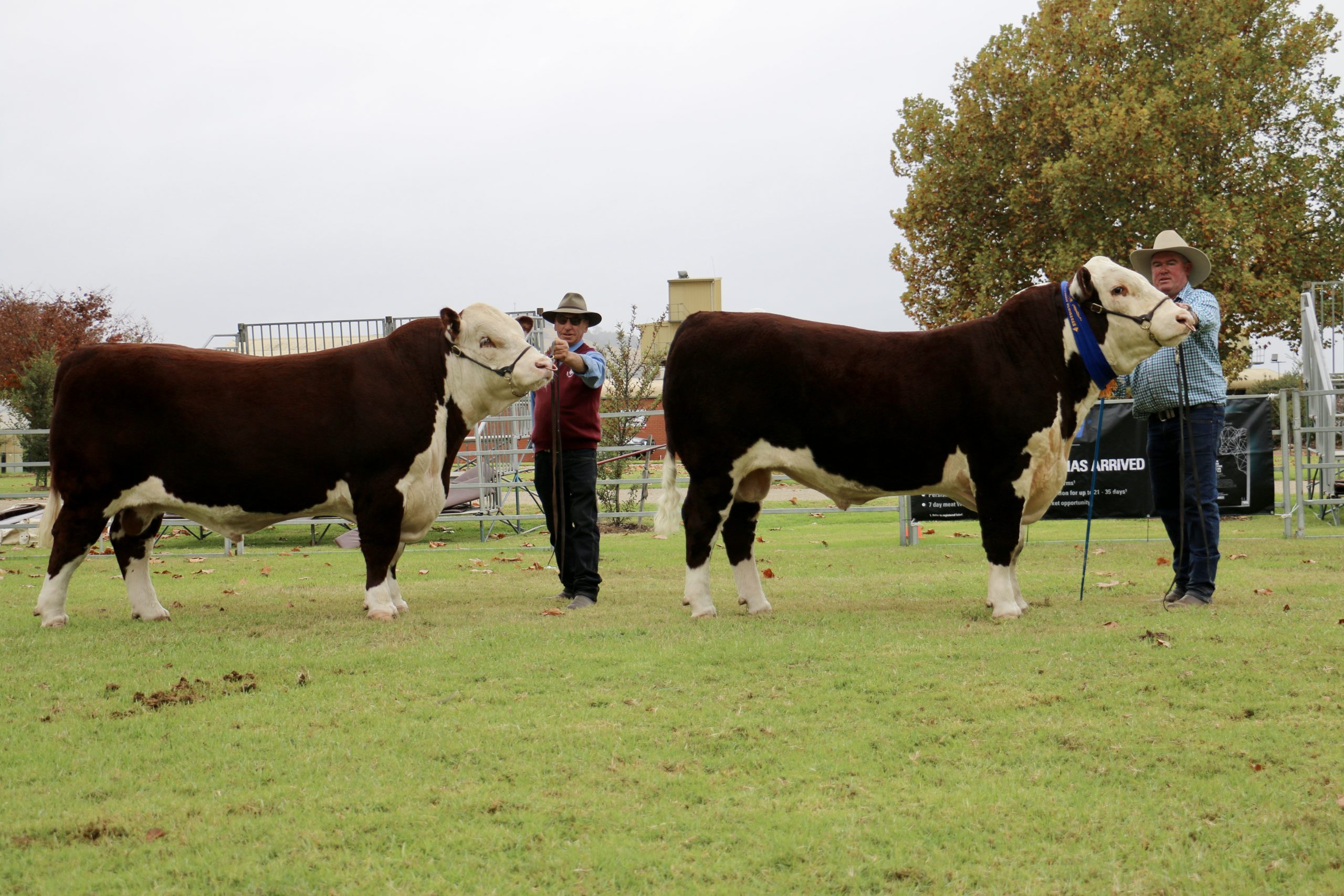 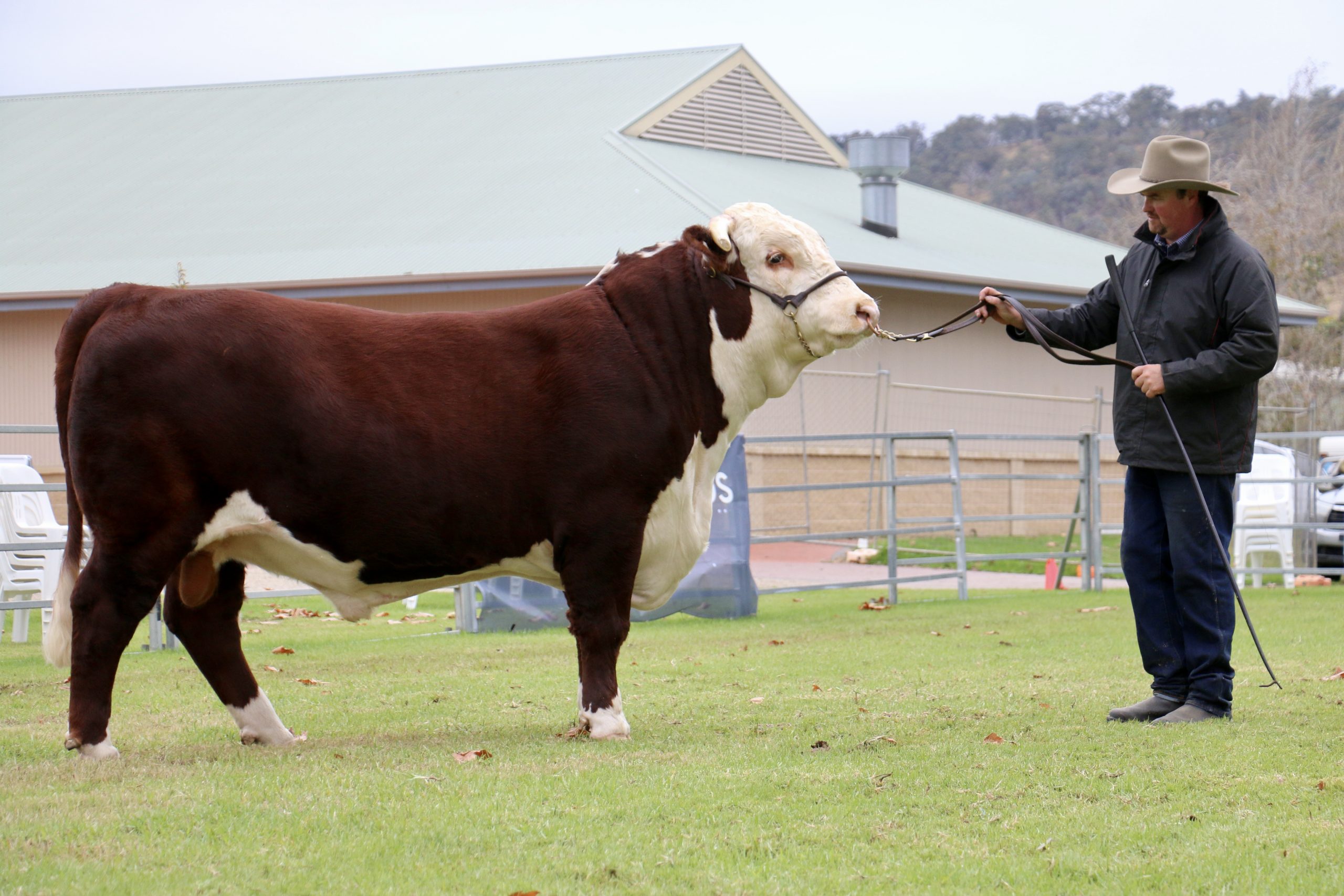 Burrawang Rockefeller R022 was sold by Burrawang Herefords, Forbes, to the Trethowan family, Cookardinia, NSW, for $26,000. 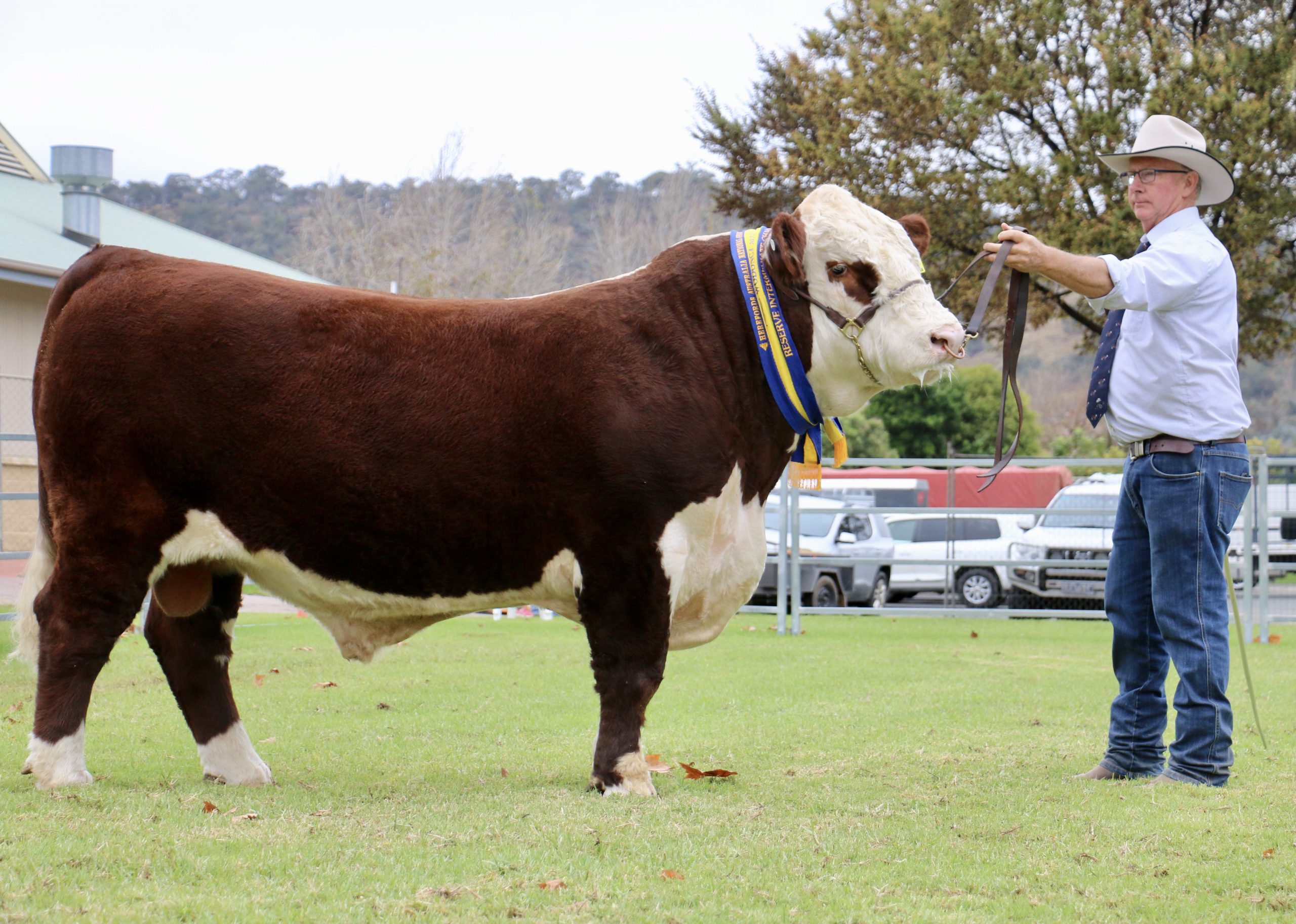 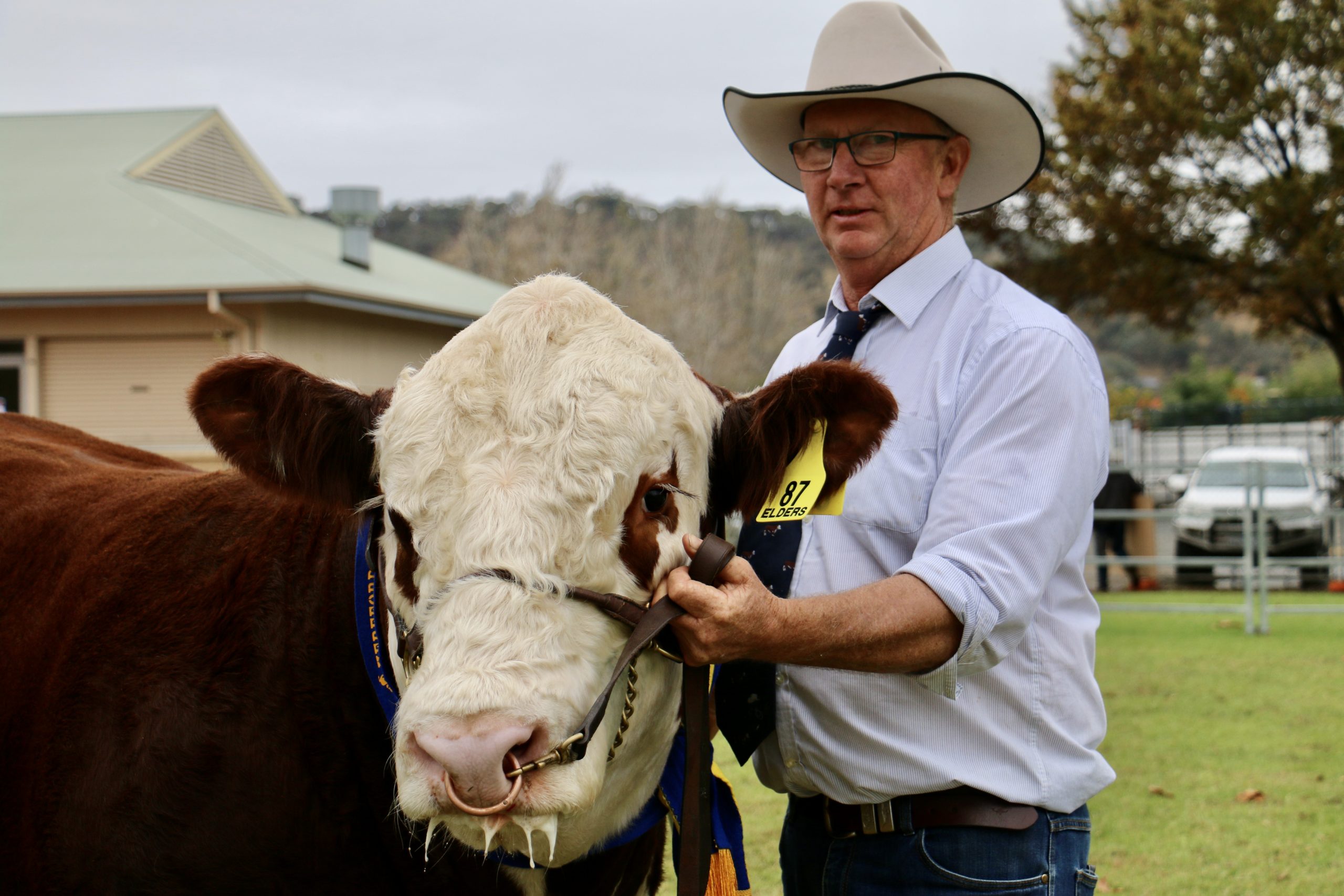 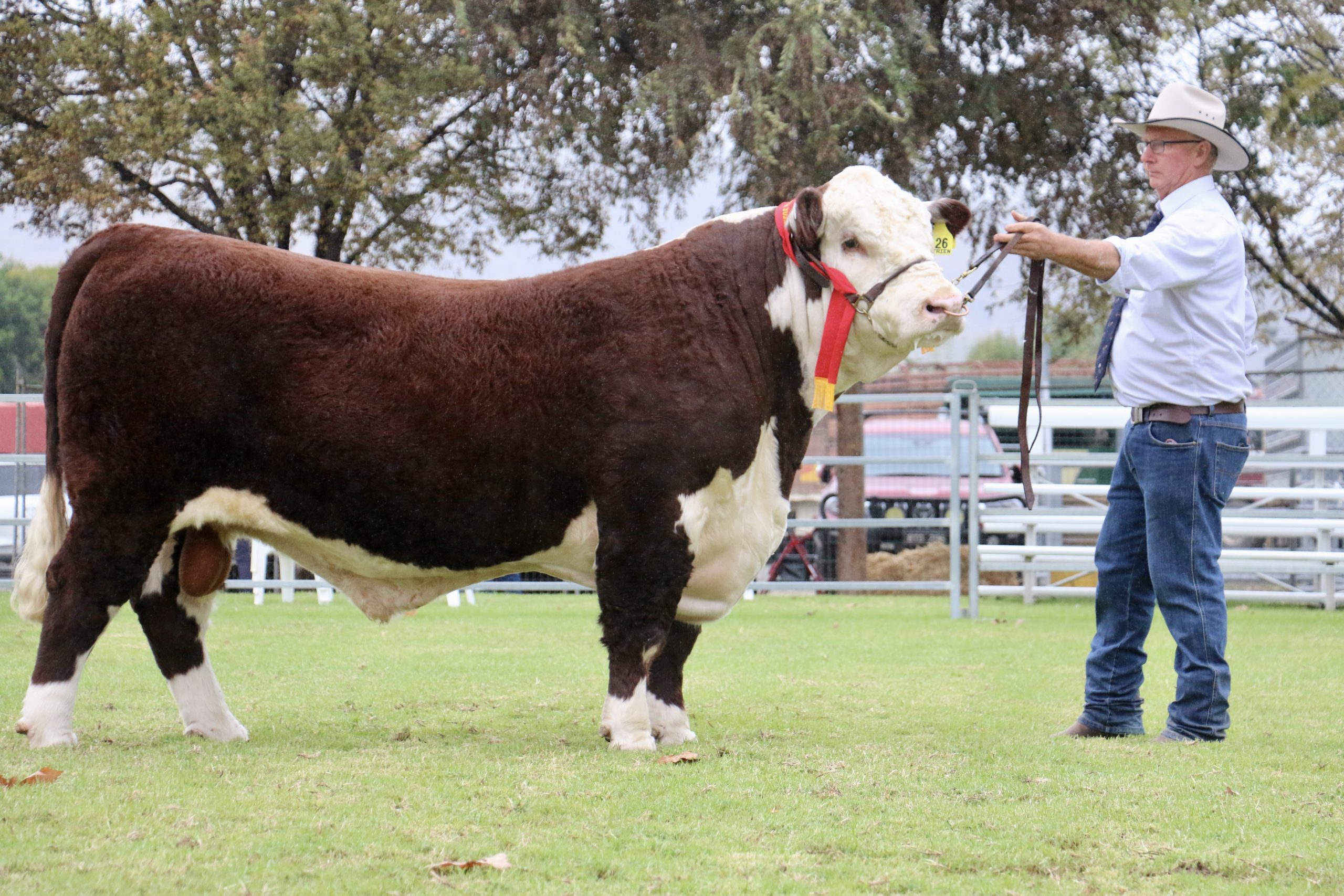 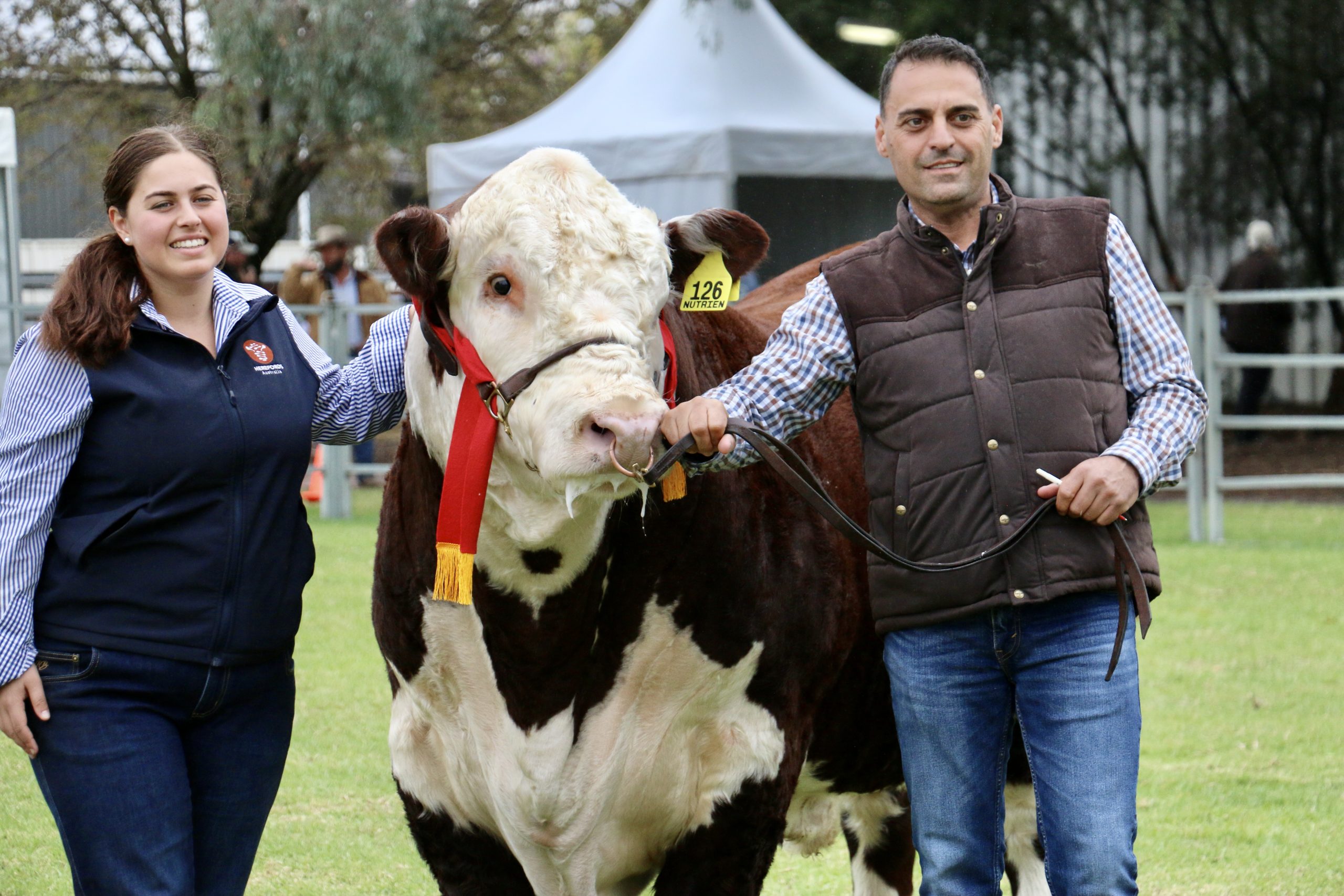 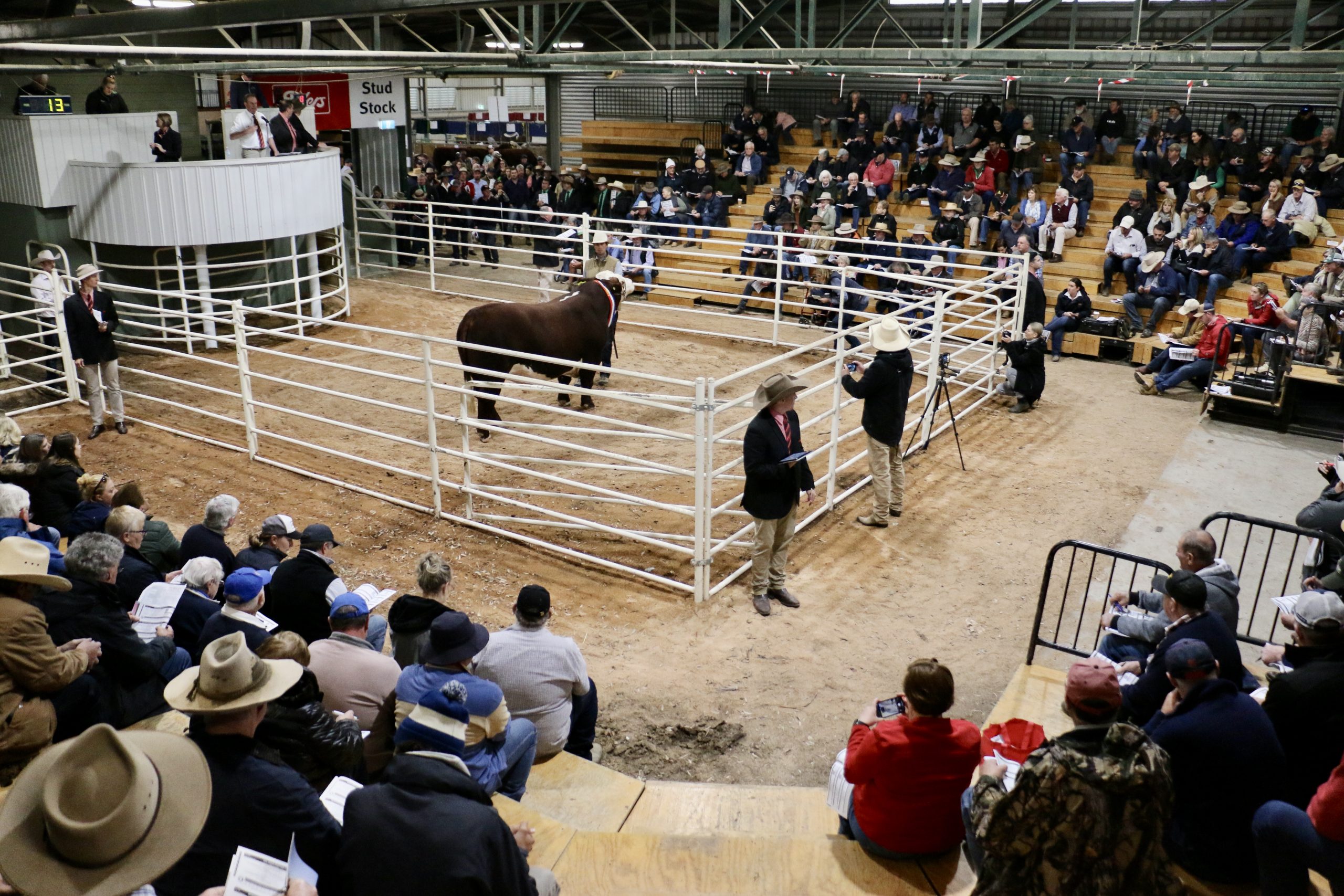 The 2022 Herefords Australia National sale at Wodonga averaged $15,794 for 102 bulls sold under the hammer 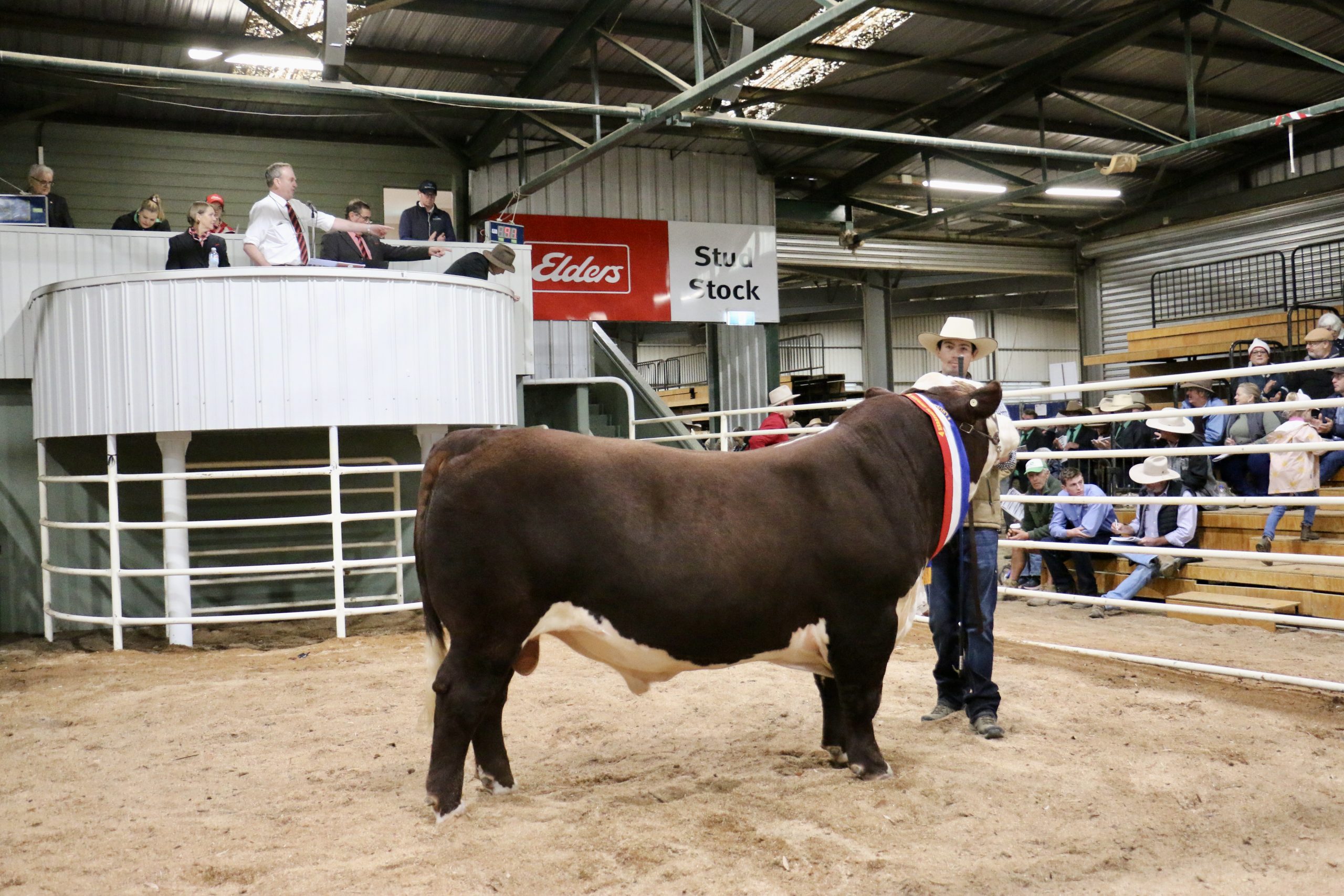