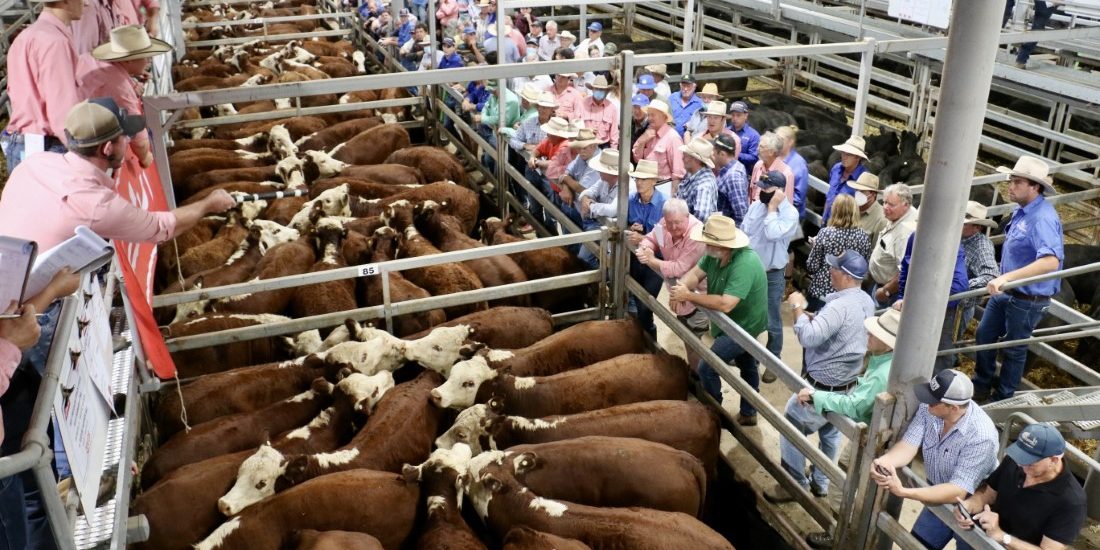 Vendors were excited to ride the wave as buyers set a red-hot pace at Wodonga to send prices soaring to a stellar 1049c/kg in the opening salvo of the 2022 weaner sales.

Topping the purebred autumn drop Hereford offering on a dollars per head basis was Sleigh Pastoral, Jerilderie, on $2470 for 390kg steers, while Tarabah Pastoral Company, Morundah, topped the cents per kilogram on 1049c/kg for steers under 200kg.

This compared to the Angus sale the previous day which topped at $2880 and 877c/kg.

The overall champion pen sponsored by Elders was also awarded to Sleigh Pastoral, Jerilderie, for their pen of 21 steers, Bayunga bred and weighing 390kg, selling for $2470 or 630c/kg to Corcoran Parker, Wodonga.

Mr Ward described the pens as exhibiting growth for age, length, bone and evenness. He was filling northern orders on the day for backgrounders and lotfeeders for steers and heifers at 300-320kg liveweight.

The sale opened on an annual draft of heavy grown steers from Alastair McKoy, Ohio Herefords, Holbrook, with the run topping at $2870 (510c/kg) for a pen weighing 562kg and aged 21-22 months.

Woodstock Partnership, Tooma, topped the whiteface heavy grown steers with a pen of 549kg black baldies on $2900 or 528c/kg.

A highlight of the sale was the run of 563 steer weaners from Michael and Anna Coughlan, Tarabah Livestock Company, Morundah. The Wirruna blood steers were sired by bulls ranked in the top 15 per cent for eye muscle area, top 10 per cent for IMF, were December weaned, and Greenhams Never Ever accredited.

Among the vendors was Richard Long, “Howitt Plains”, Tamleigh, with Yavenvale and Glentrevor blood steers, treated with Bovilis and Elders Feedlot Ready.

His objective to breed cattle with docility, marbling and carcase paid off with prices for his draft $400 up on last year.

“I always sell weaners at this sale and keep a few older steers to show buyers what they can grow into,” Mr McCallum said.

“I like the weight gains and docility of the Hereford. It is the first year we have treated them with Bovilis as you have to meet the market and be prepared to give the buyers what they want.”

Among the buyers was Ken Sylvester, Scone, NSW, was actively sourcing 350kg liveweight Herefords to finish on grass for the export market at 430kg dressed. Ken paid $2095 or 855c/kg for 35 Wirruna blood steers, 245kg, from Tarabah Pastoral.

David Allen, Mitiamo, Vic, was buying Hereford cattle for himself and his brother Neil to finish to feedlot entry weights or to Greenham’s Never Ever program.

“It’s terrific and exciting. It’s nice to catch up with people and you can learn quite a bit from coming to the sales,” Mrs Trickett said.

She said the additional revenue would mean a spend up on new genetics, cattle yards and “farm development ideas would be implemented”.

“We went into the sale hoping the job would be as strong as what we saw in 2021 and it has opened extremely strong,” Mr Shea said.

“The buyers got fired up on those early to mid 300kg cattle – very strong on the Herefords with multiple northern orders operating.

“Our company is proud of the feature run of Herefords at this sale each year and this is the first time we have combined it as a black and coloured sale. We were diligent to ensure the Herefords got the recognition and the position in the sale they deserved.”

“Those Tarabah cattle were the first to sell over $10/kg at Wodonga. It will be difficult to buy runs of calves that weight the further we push into 2022,” he said.

“Michael and Anna Coughlan picked a good time to market lightweight calves with strong northern demand and those Tarabah cattle do get so much repeat competition.

“There were strong orders for grown joinable heifers and that filtered down to the lead run of unjoined heifer weaners with solid interest from the New England, northern Victoria and southern NSW.” 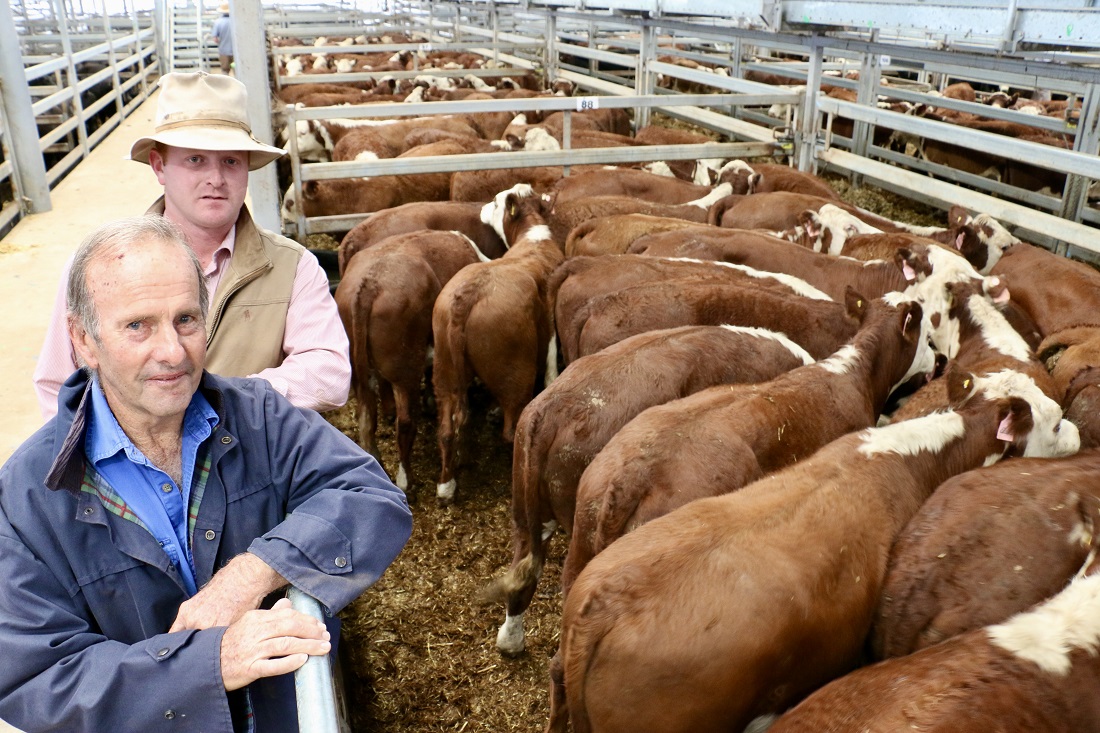 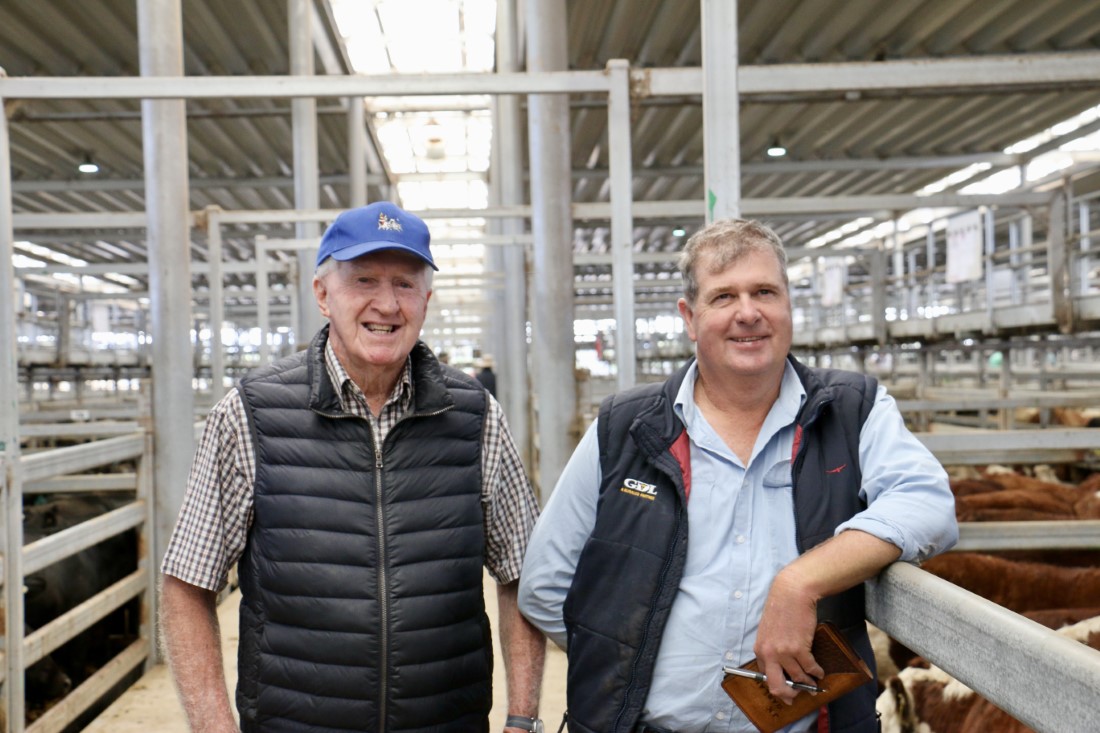 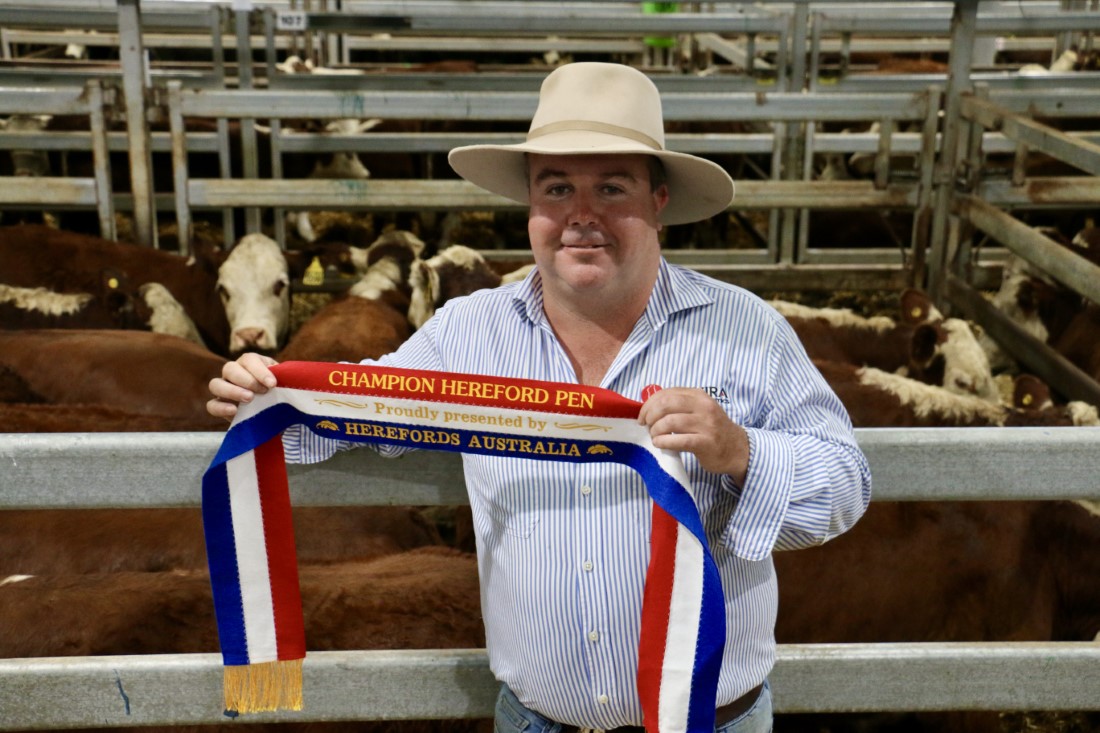 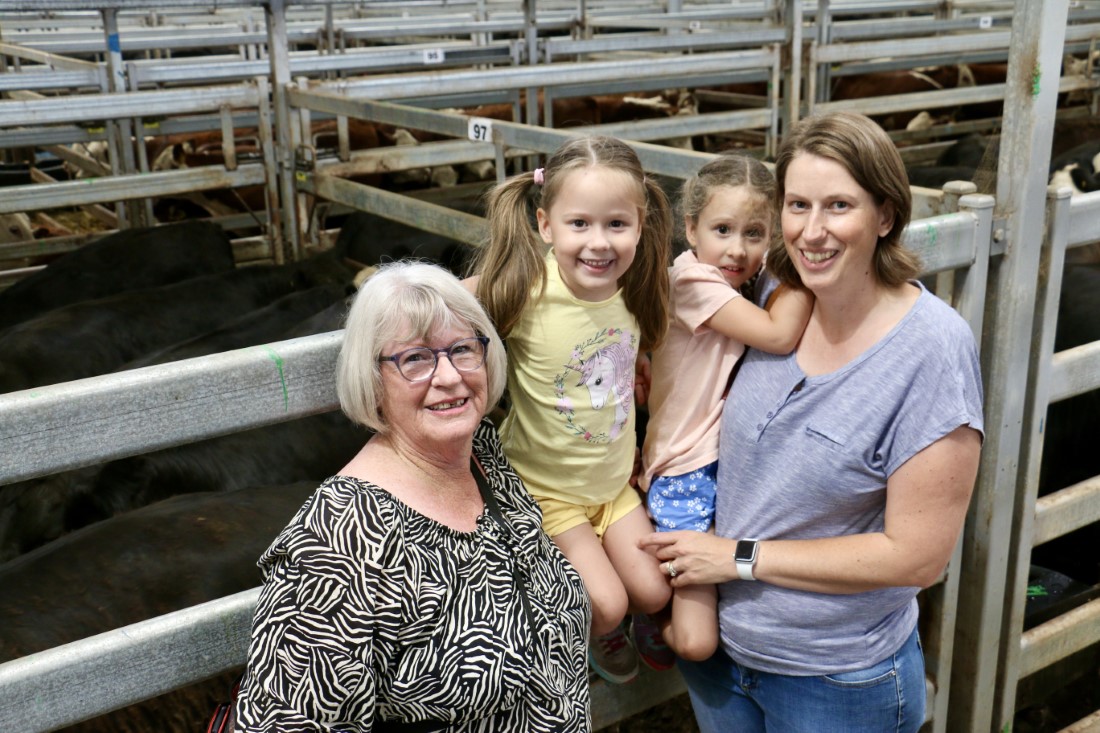 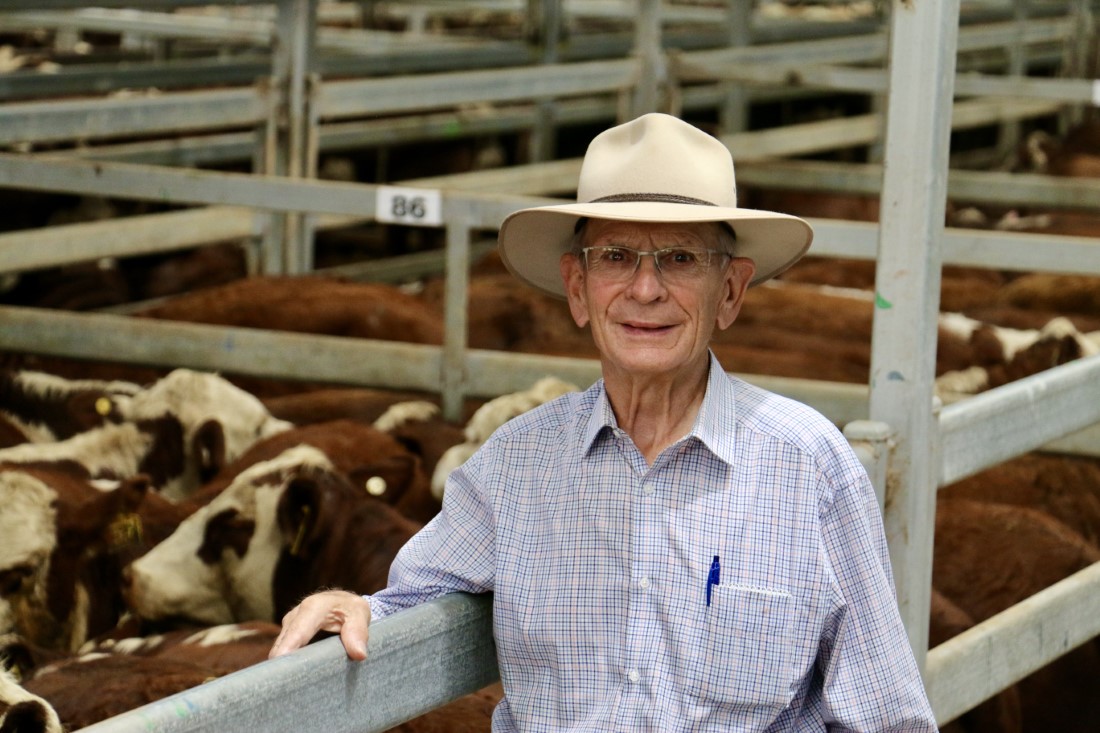 Ian Wilson, Ruglen Herefords, Bungowannah, was getting a feel for 2022 prices at Wodonga. He recently sold heavy steers, Danetree blood, at 650kg for $2860, and is looking for replacements. 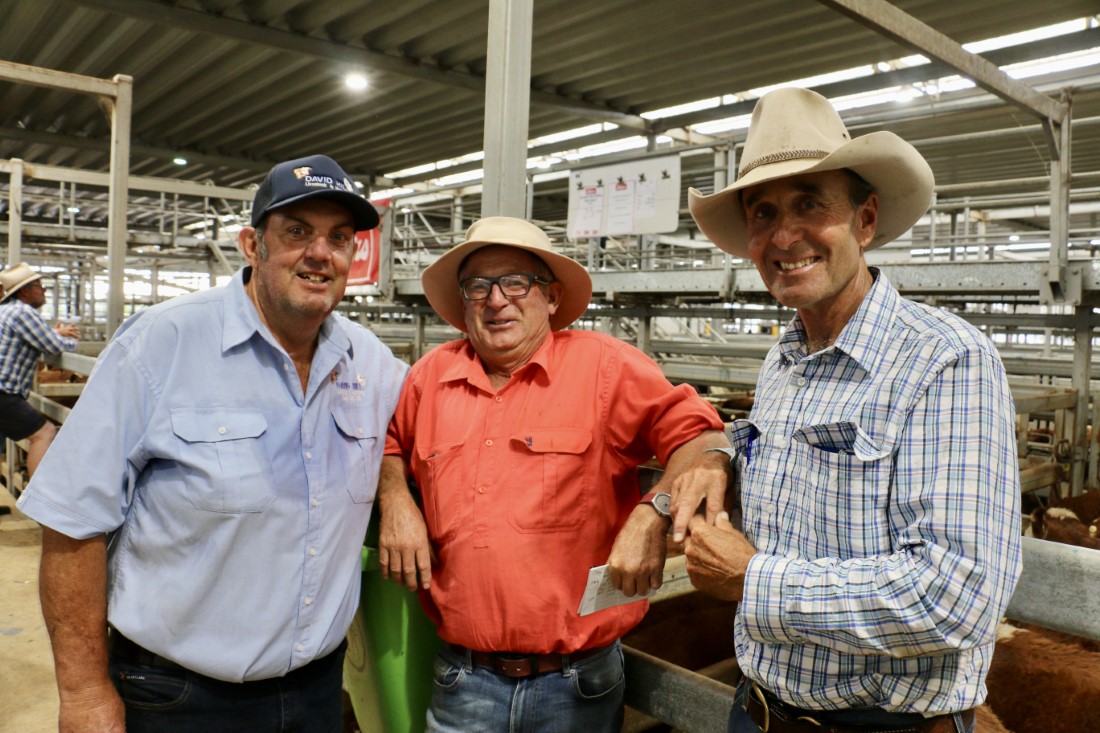 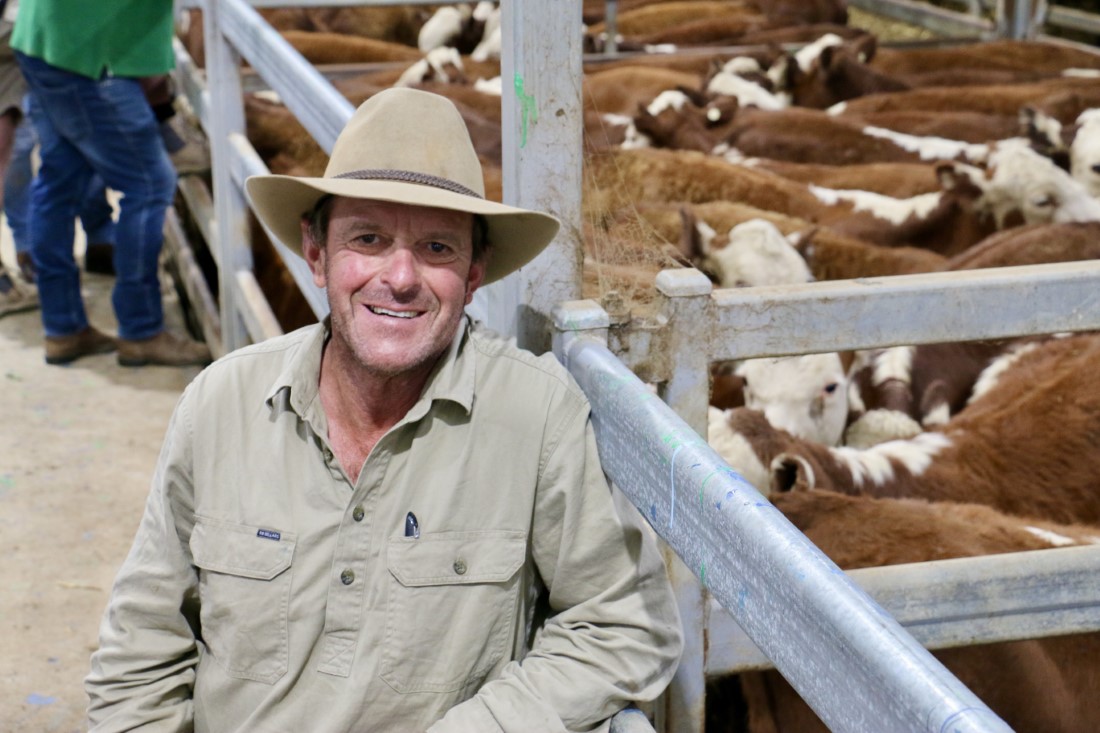 David Allen, Mitiamo, Vic, was buying Herefords for himself and his brother Neil to finish off grass for feedlots or to Greenham’s Never Ever program. 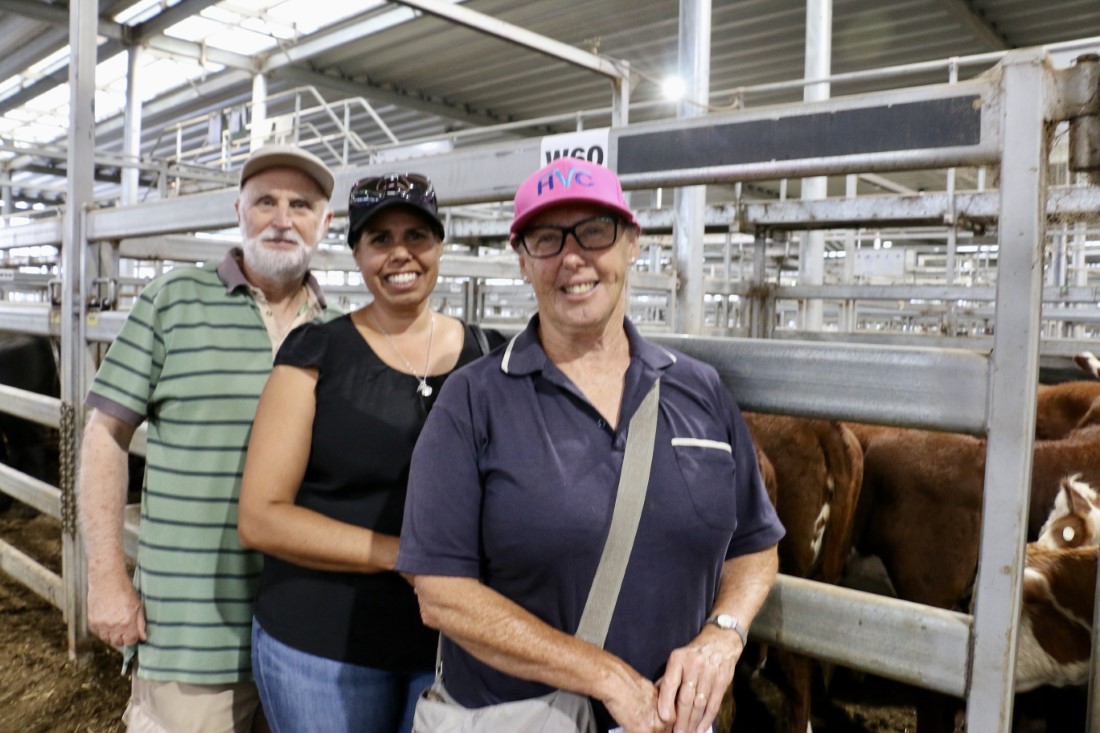 Stephen and Cecily Trickett, Culcairn, with their daughter Katrina Morrison, sold this pen of Wirruna blood heifers, 270kg, for $1810 or 670c/kg. 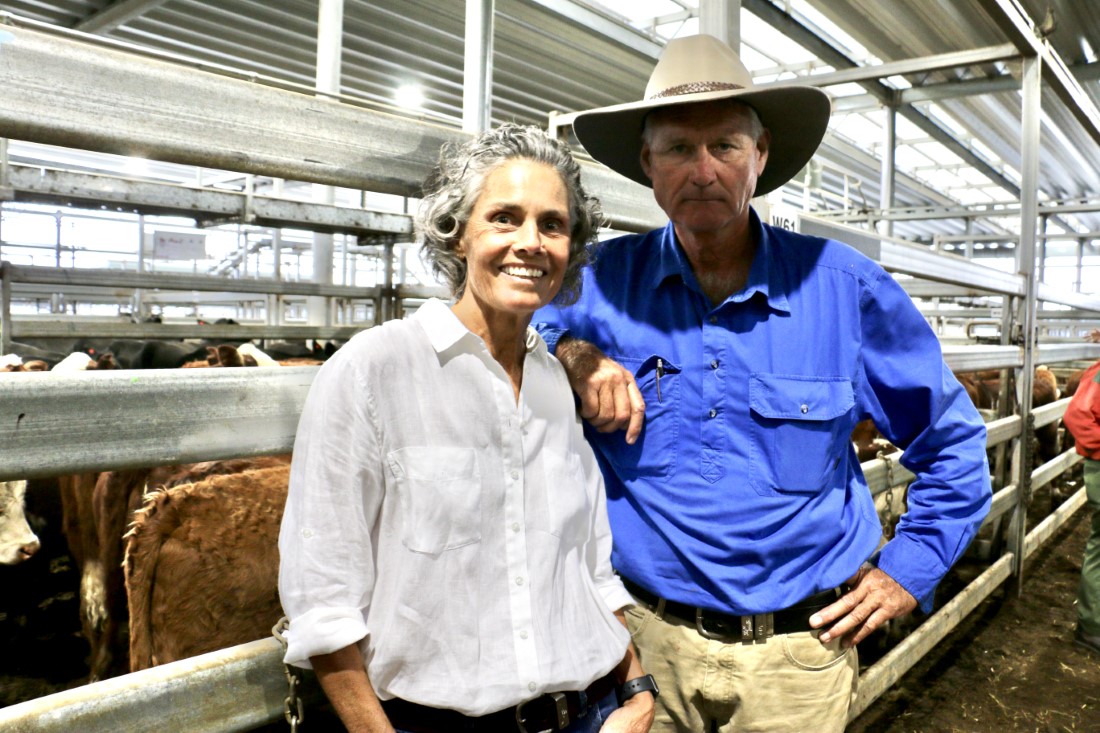 Anna and Michael Coughlan, Tarabah Pastoral Company, Morundah, sold a run of over 500 steer weaners, Wirruna blood, to a top of 1049c/kg. 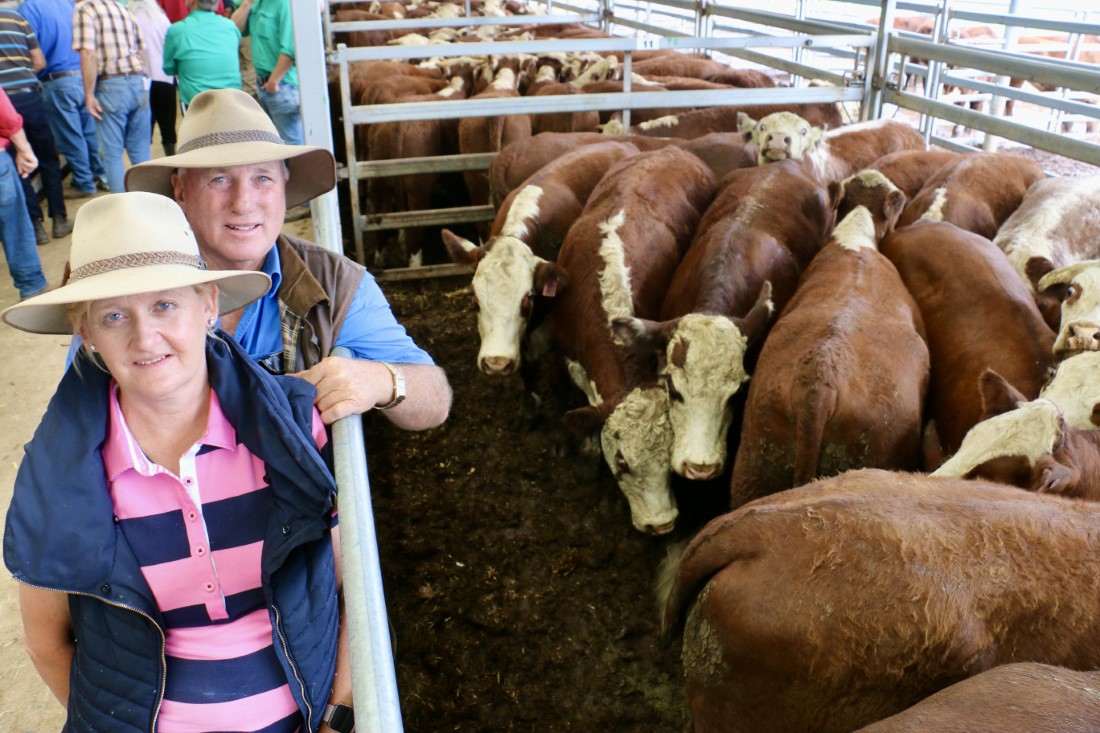 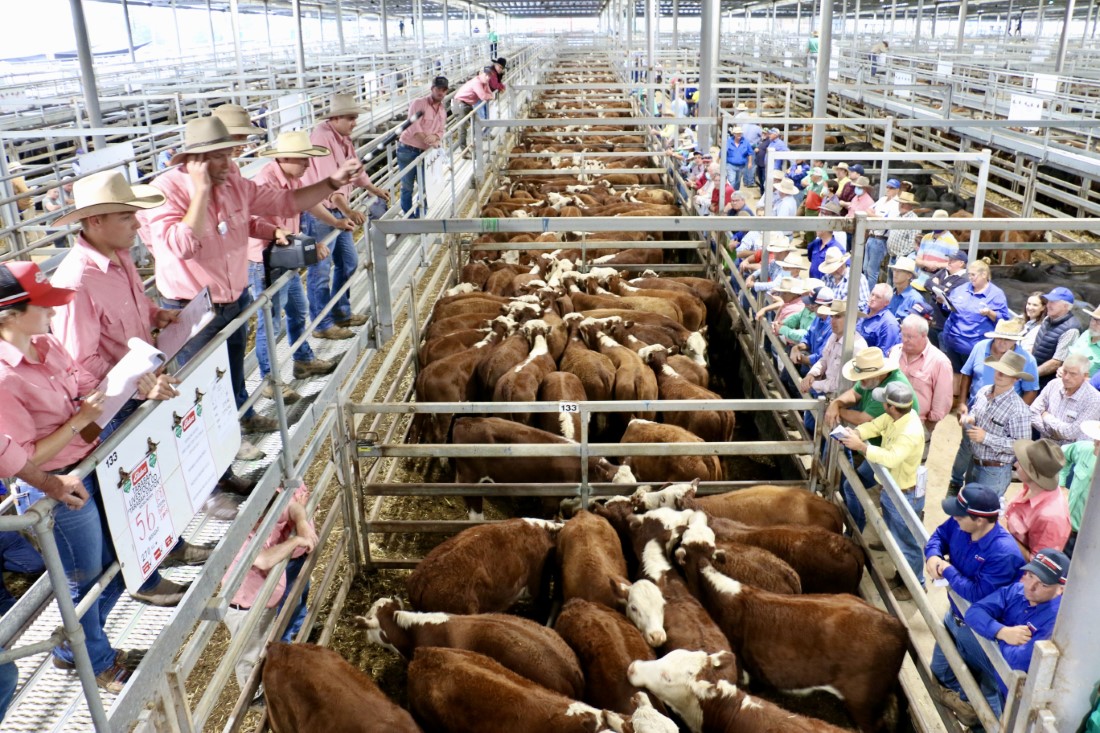 The run of over 500 Wirruna blood weaners from Tarabah Pastoral, Morundah, with a new record for weaner prices for the breed set at 1049c/kg. 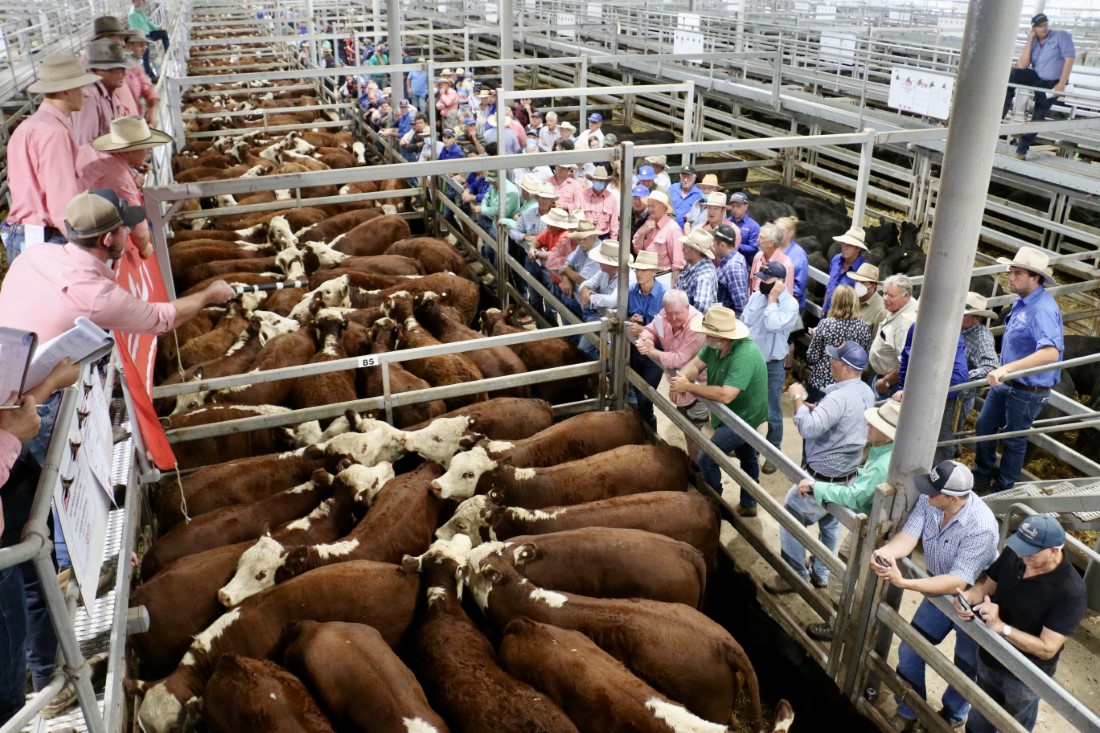 Bids fly for the champion pens at the Premier All Breeds Grown and Feature Weaner sale from Sleigh Pastoral, Jerilderie and Ruffy. 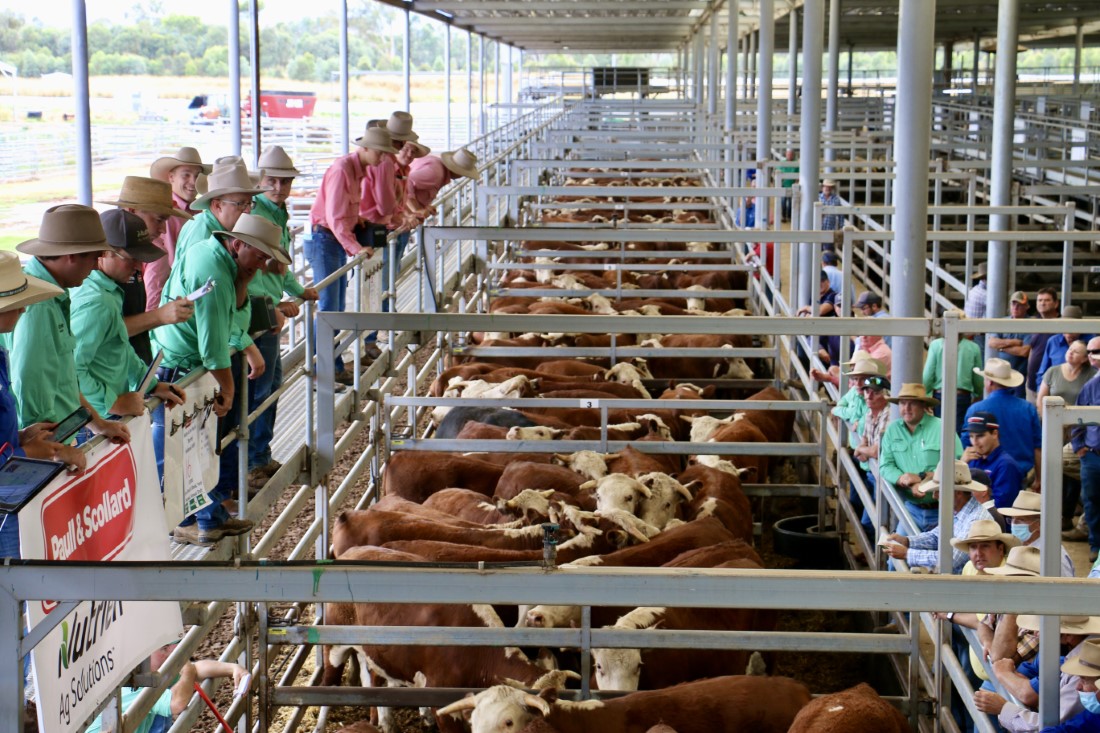 The heavy grown Hereford steers topped at $2870 at Wodonga. 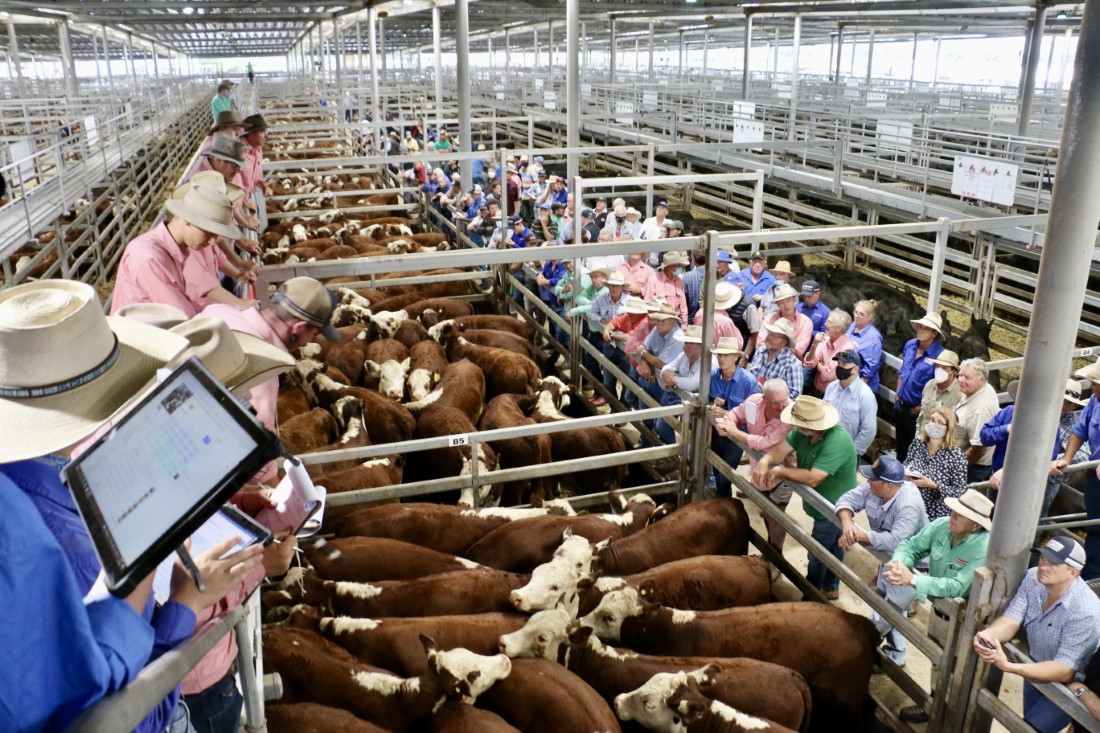