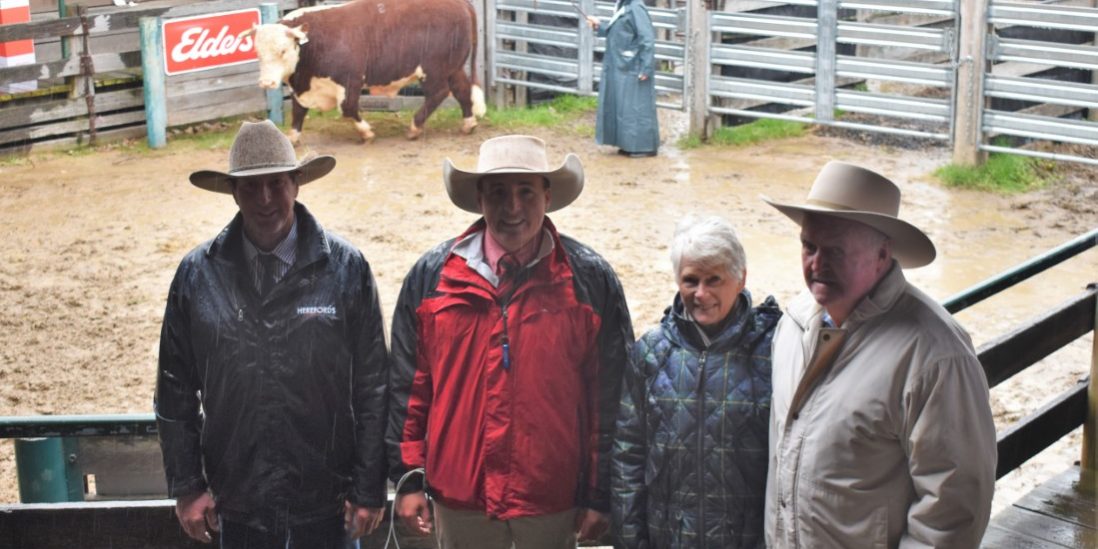 The cold and wet weather didn’t dampen the spirits of anyone in attendance at the 76th annual Glen Innes Hereford Bull Sale, with 37 of 43 bulls selling to a top of $26,000 and averaging $7851.

Auctioneer Lincoln McKinlay attributed a lot of the buying strength to local support with good stud activity on the day as well.

“Buying strength was generally pretty local with a few bulls heading back over to the coast.

“We saw three of four studs operate on the day and bought some very good bulls and were underbidders on a couple of bulls that actually ended up going to commercial producers, so it shows where the commercial relevance of the Hereford breed is going at the moment,” Mr McKinlay said.

The top price was fetched by Kylandee Quamby Q007, continuing an incredibly successful show and sale campaign for Phil and Brad Thomas of Kylandee Herefords, Elsmore.

Sired by Kylandee Murrumbo, 25-month-old Kylandee Quamby Q007 tipped the scales at 1045 kilograms with a raw EMA of 142 square centimetres and rib and rump fats of 15 and 24 millimetres.

Purchased by George and Shirley Hardcastle of McPherson Herefords at Old Koreelah, Quamby Q007 is a high growth bull with a moderate birthweight.

According to Mr Hardcastle Quamby Q007 appealed to him for his length and sirey outlook and will be put straight to work in both the commercial and stud herd when he arrives at his new home.

Mr Hardcastle is a repeat buyer at the Glen Innes sale and has purchased Kylandee bulls previously, most recently selling a son of Kylandee Jackass (purchased in 2017) for the top price of $16,000 at the Casino bull sale.

Quamby Q007 was also named as the Yardsmen’s Pick, a prestigious award at the Glen Innes Bull Sale which Kylandee have won for the last six years in a row.

Phil Thomas of Kylandee was thrilled with their results over the two days and attributed their success to the quality of their line-up of bulls, which according to Mr Thomas stems from the strength of their female herd.

“We’re totally over the moon, and we believe it’s the best team of bulls we’ve ever presented by a long way.

The second top price of the day was $20,000 which was paid by the Weis family of Kareba Pastoral Company for Jindalee Quaker Q050.

The 24-month-old bull was sired by Burrawang Lexicon and weighed in at 895 kilograms with a raw EMA scan of 124 square centimetres and rib and rump fats of 14 and 20 millimetres.

Exhibited by Angus and Eunice Vivers of Jindalee Herefords, Quaker Q050 is a high growth sire with 200 and 400-day weights in the top 10 percent of the breed and a 600-day weight in the top 15 percent.

Black Knight weighed it at 855 kilograms and sold to a purchaser in Cootamundra via AuctionsPlus.

Swanvale Quinn Q923 exhibited by Peter and Karen Weller sold for $10,500 to PH Swatridge of Nevertire.

The low birthweight bull was sired by Elite H284 M182 and tipped the scales at 815 kilograms with an EMA of 125 square centimetres.

Ben had judged the show class the day before and selected Quirindi Q015 as his grand champion, describing the young sire as “a really sound, all round breeding bull” with a beautifully smooth muscle pattern.

The second Kylandee bull to make $10,000 was Kylandee Quinalow Q014 which sold to Nattai Investments.

All seven stud heifers offerd on the day also sold averaging $2786 with the top price of $4000 paid for Leeway New Day Q911.

The 22-month-old female is PTIC to Burrawang Quince Q002 and was purchased by the Campion family of Amos Vale Herefords.

15 commercial heifers offered in three lots by Ben and Leanne Rumbel of Supple Herefords also sold for an average price of $3100 per head.

Glen Innes committee chairman Peter Weller was pleased with how the 76th annual event panned out despite the weather conditions COVID border closures.

Mr Weller commended vendors on the high standard of bulls that were on offer and was happy the show and sale had been able to go ahead, enabling people from across the industry to enjoy the social occasion the event offers.

“It’s a credit to the vendors the quality of the bulls that were here and it’s good to catch up with people you only see once or twice a year,” Mr Weller said. 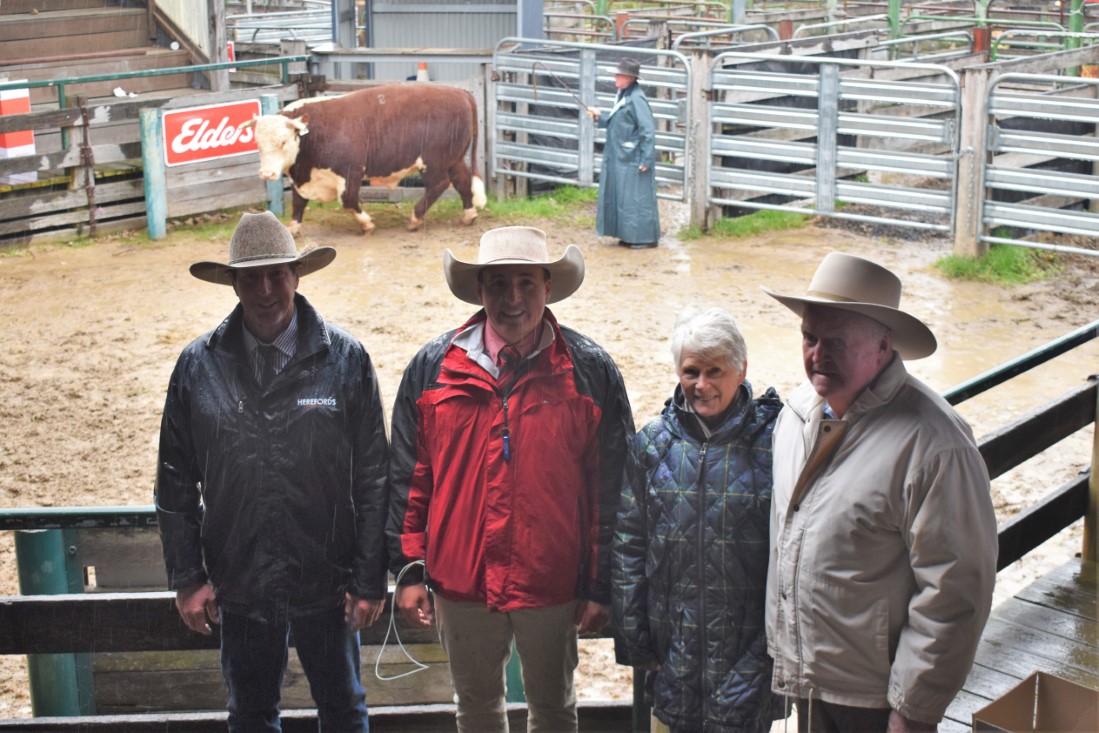 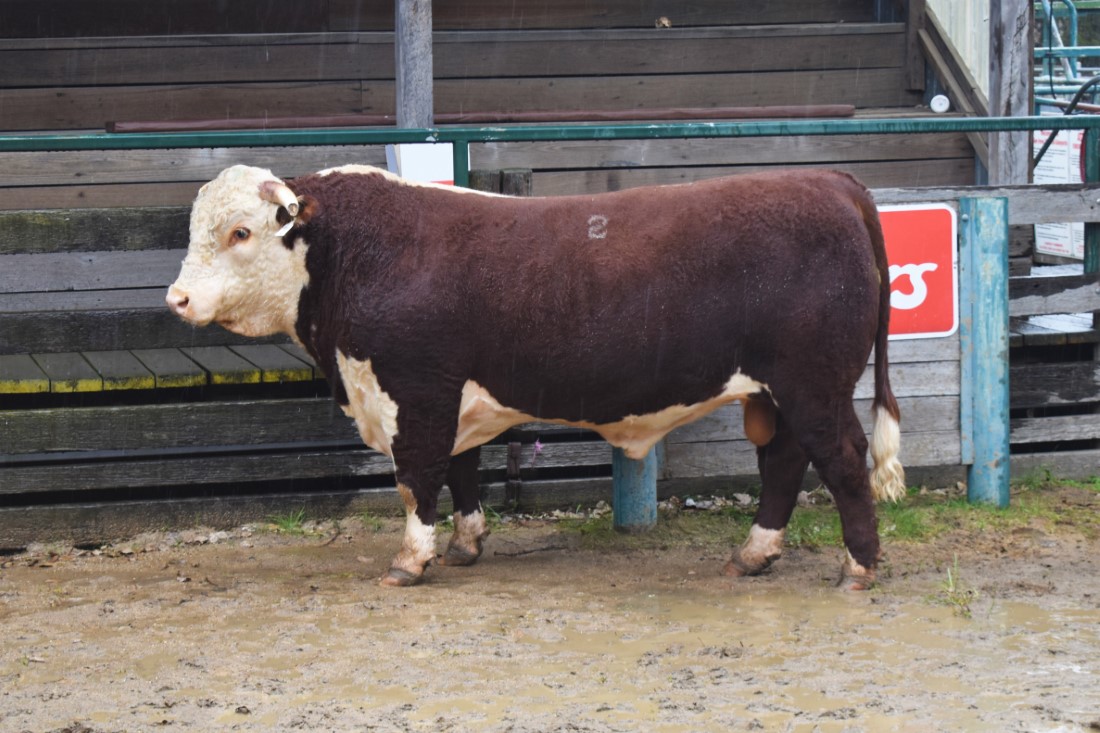 Kylandee Quamby Q007 sold for the top price of $26,000 and was named Yardsmen’s Pick at the 76th annual Glen Innes Bull Sale. 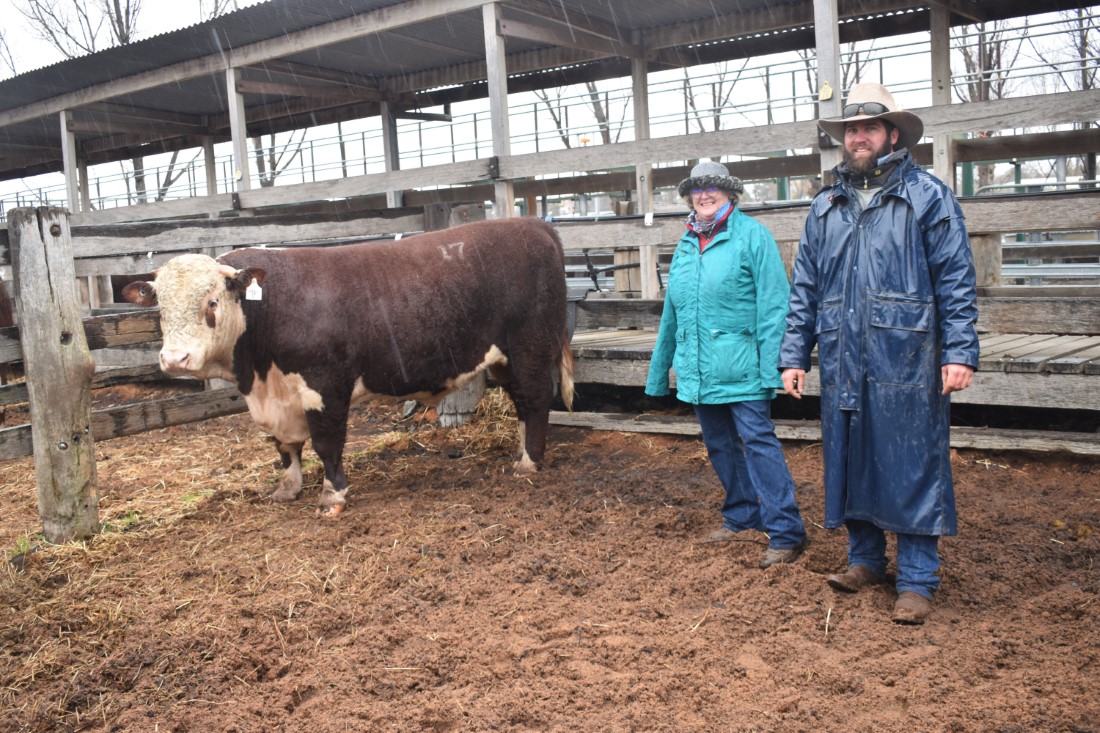 Eunice and Will Vivers of Jindalee Herefords with $20,000 Jindalee Quaker Q050. 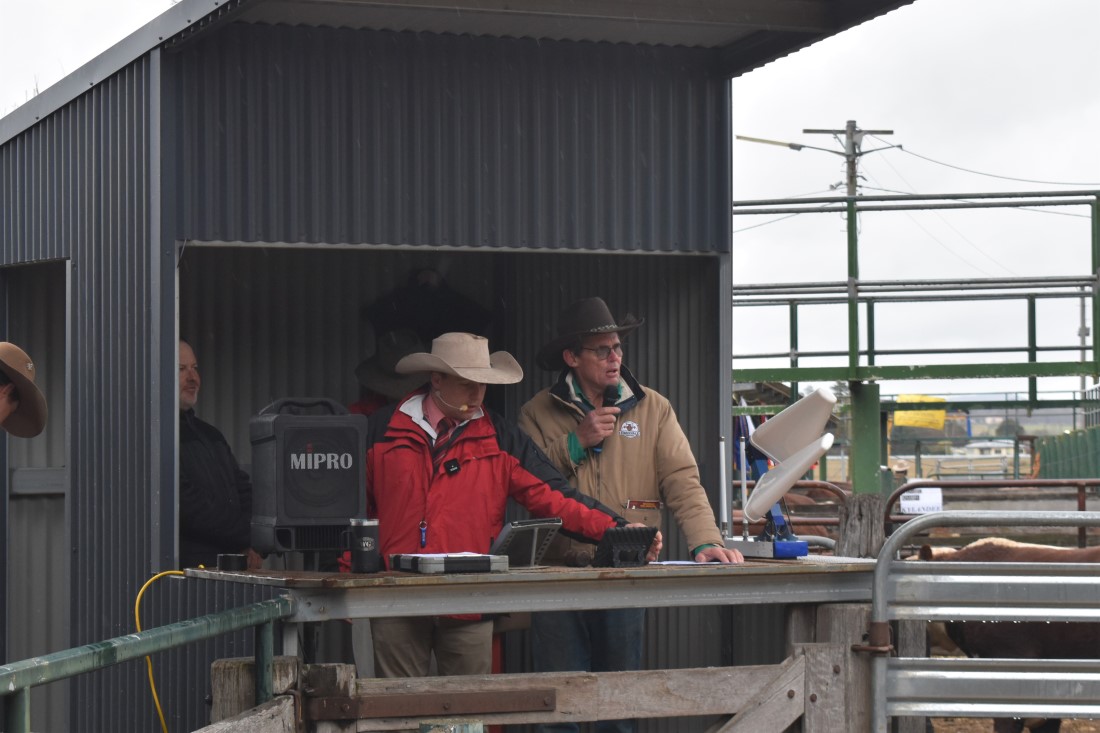 Glen Innes committee chairman Peter Weller addresses the crowd at the beginning of the sale. 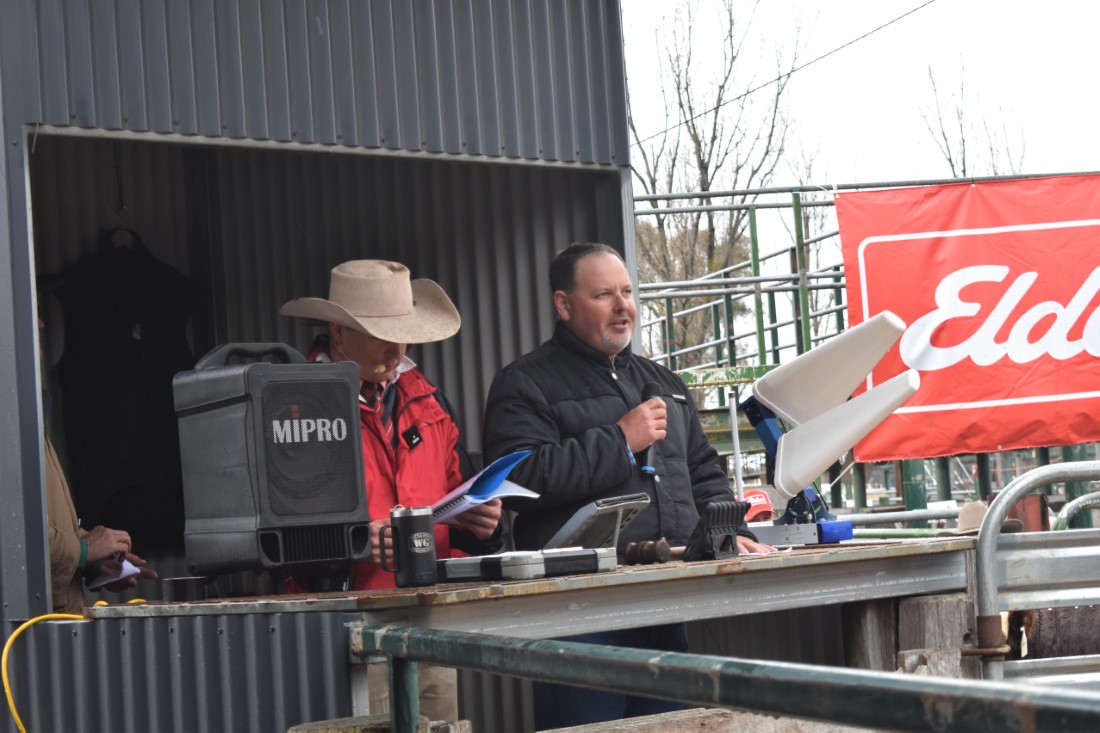 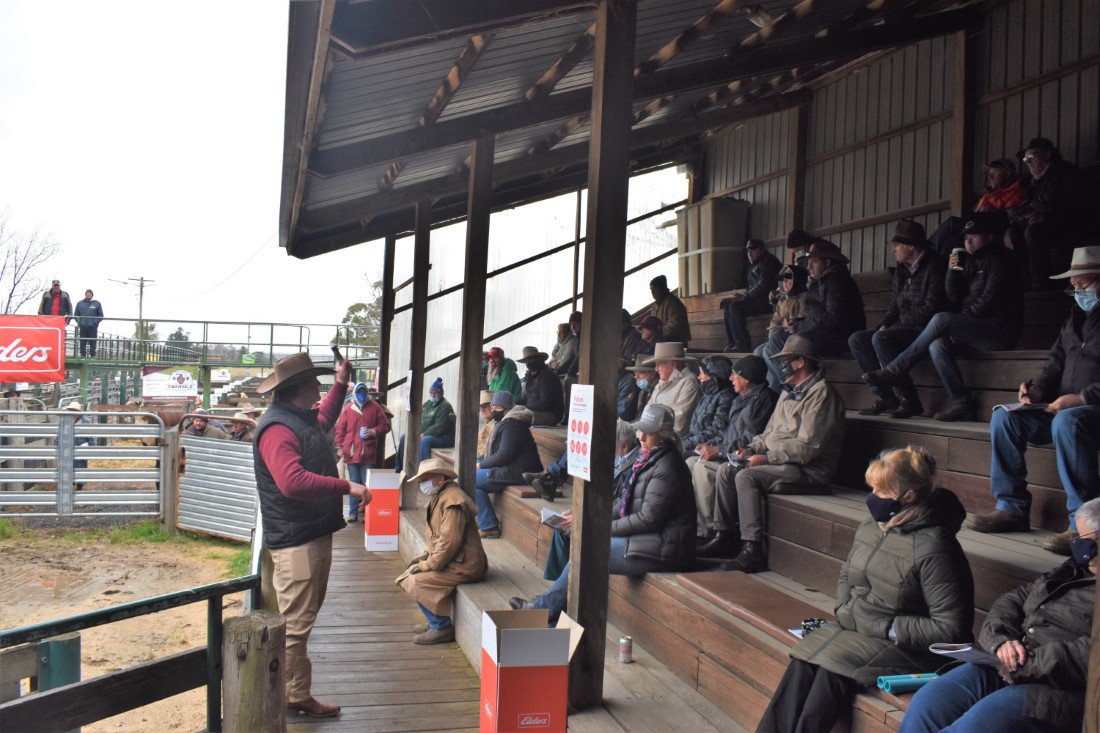 The auction was conducted by Elders and interfaced with AuctionsPlus. 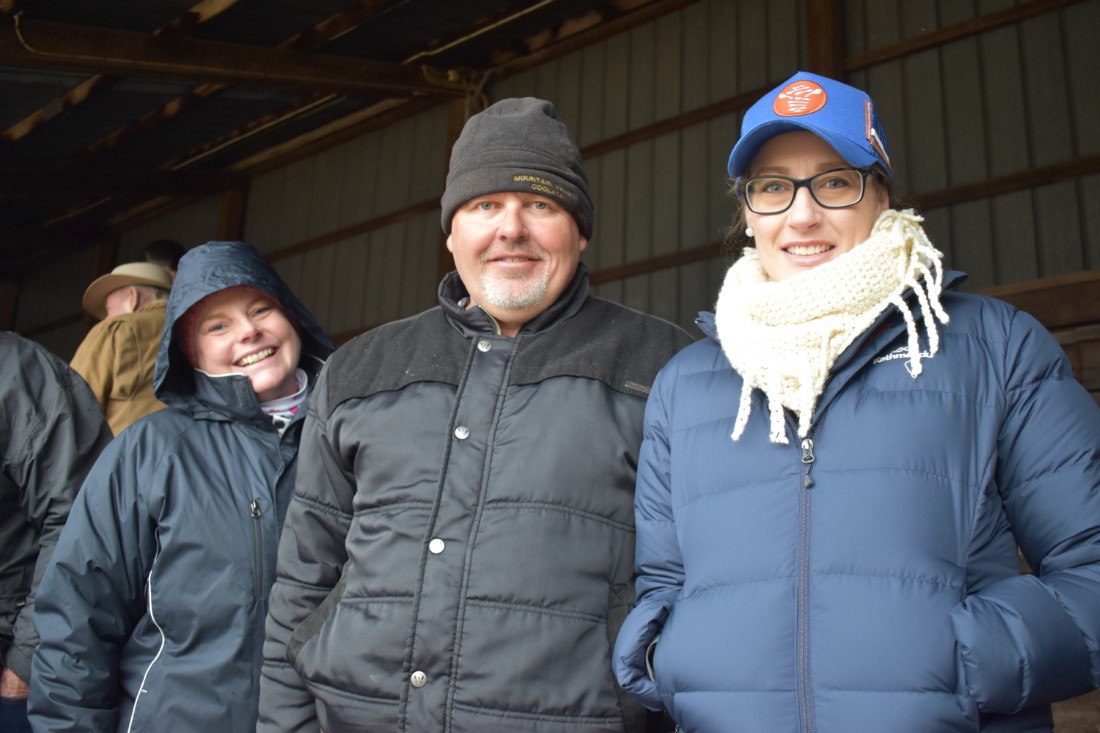 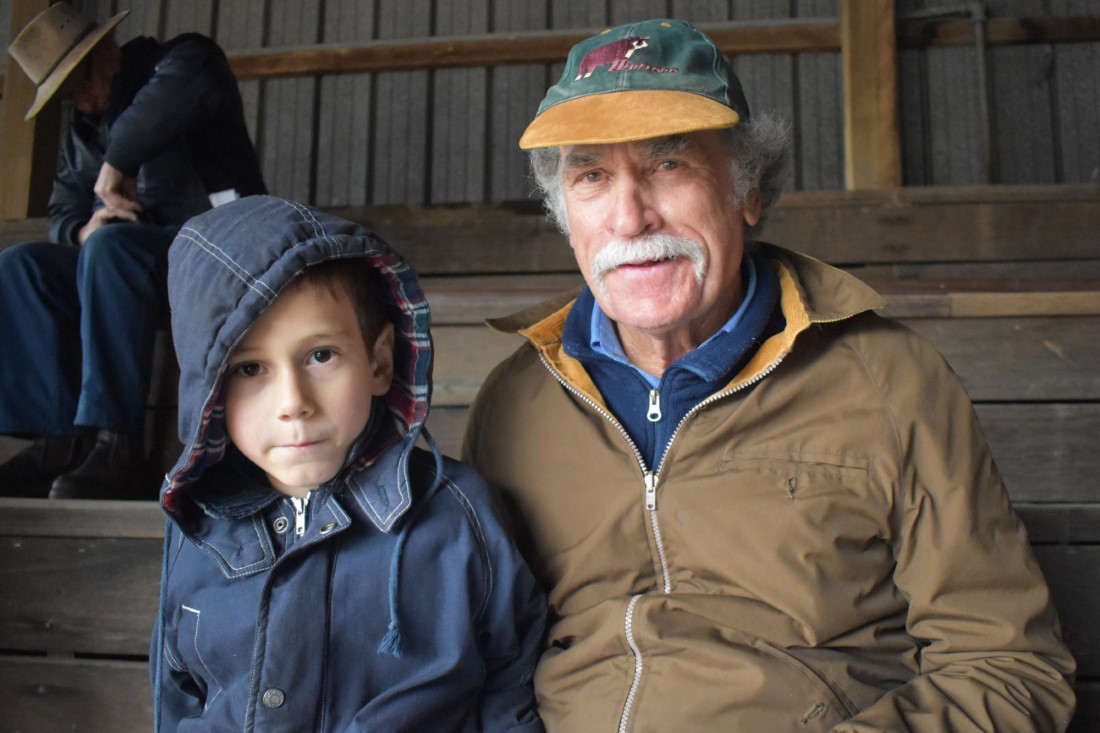 Landan and John Piggott braved the cold at Glen Innes. John purchased two stud females on the day for $2500 each. 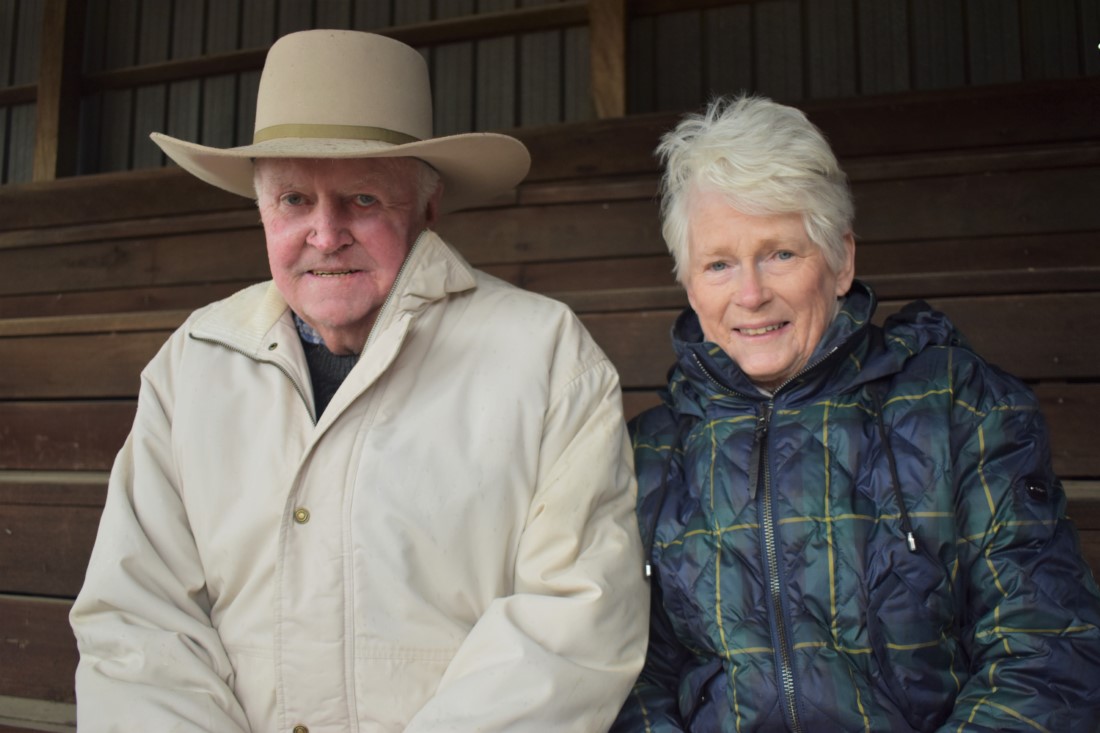 George and Shirley Hardcastle of McPherson Herefords purchased the top priced bull on the day. 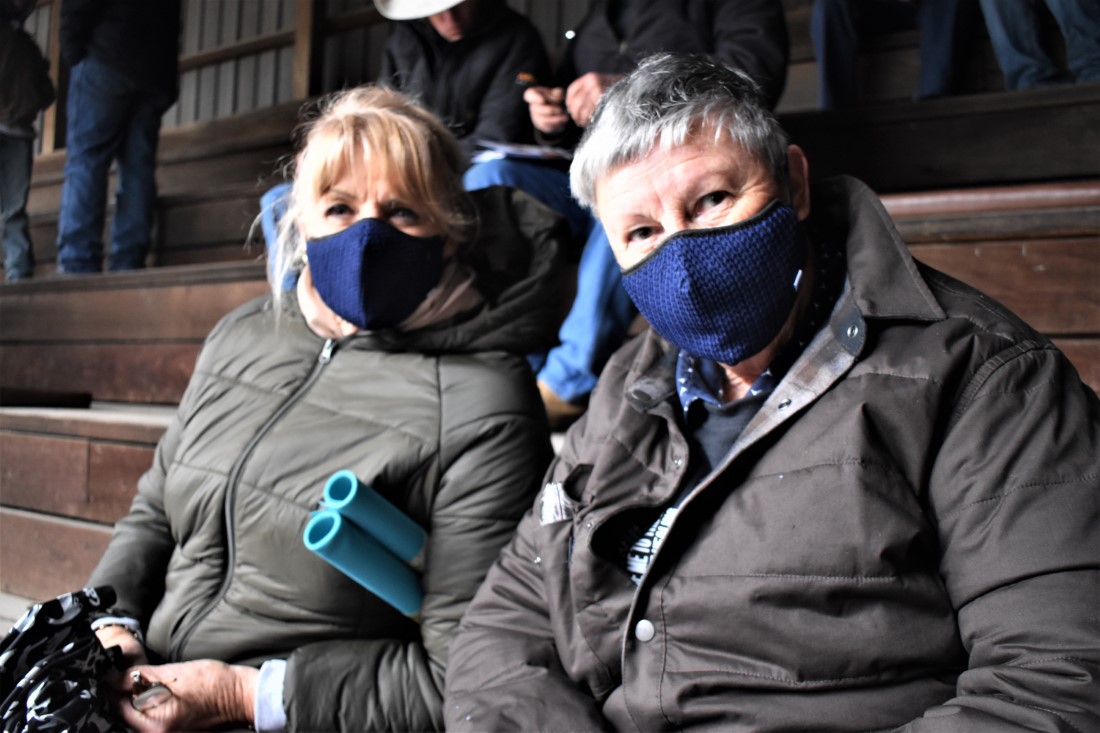